The Swiss Downhill Mountain Bike Championships 2021 took place last weekend in Leysin, on the occasion of the first edition of the Leysin Unchained (the new mountain bike festival of the resort).

After a week complicated by historic rain that gave the organizers a hard time, the Swiss Downhill Mountain Bike Championships 2021 finally took place in ideal conditions last Sunday in Leysin. The summer temperatures, the wind and the generous sunshine allowed the course to dry out and to be in optimal conditions for the final. The final took place in a crazy atmosphere thanks to the numerous spectators spread along the 2.2km course, who came to encourage the pilots. 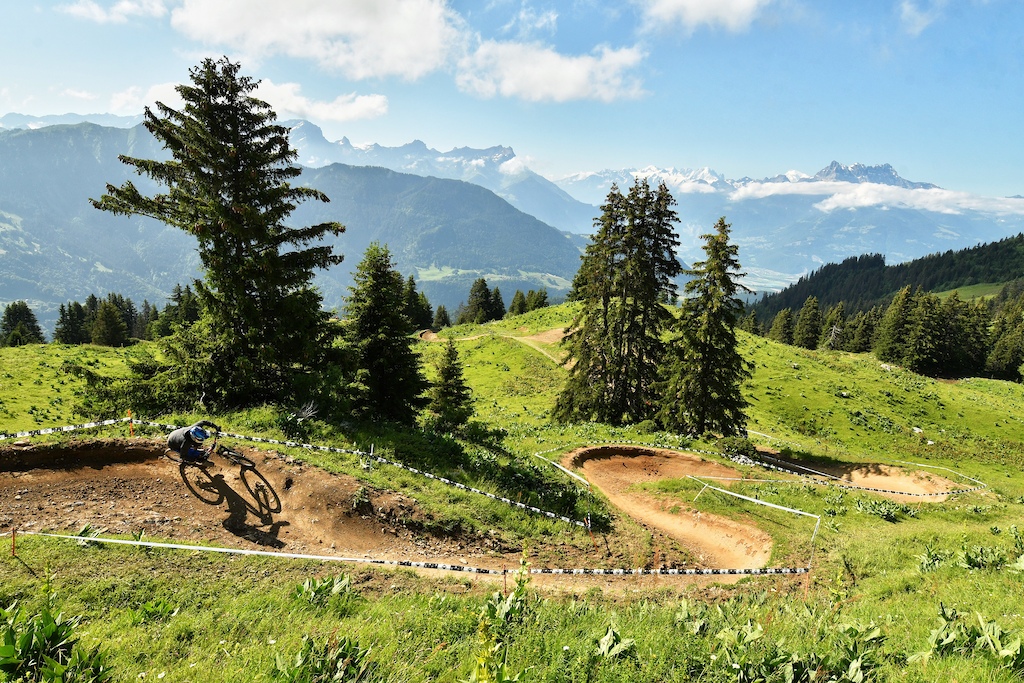 The upper section of the race track is fast, bikepark mode and full of high alpine madness backdrop 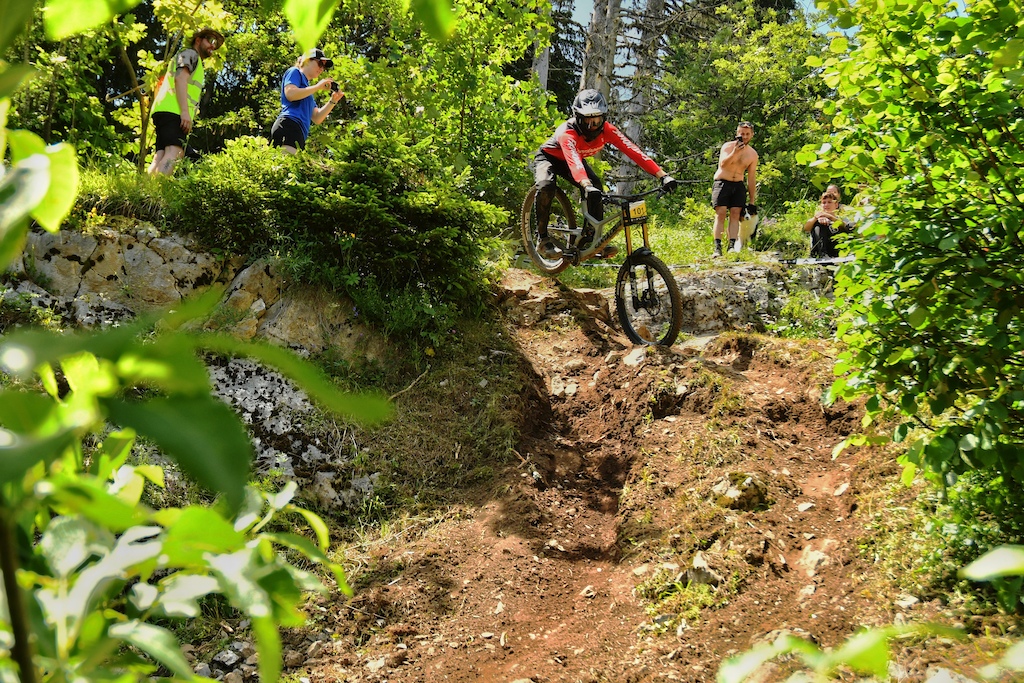 But when you enter in the "Black Section" things begin to be more rowdy and old school
The course was praised by all 195 registered riders for its quality and originality, covering all aspects of the discipline (speed, fluidity, technique, commitment, rocks, roots, jumps, physical and mental capacity). "For a first, the Leysin team prepared a track worthy of a race track. Certainly very technical given the greasy conditions on Friday and Saturday morning, but as soon as the sun came out, the track dried out and became perfect. A good mix of bike park, technical scree, root fields, jumps, and natural sections. A real race track! Hats off to you guys", says Maxime Chapuis, former Swiss Elite downhill champion and currently racing in the Enduro MTB World Cup (20th in today's ranking). 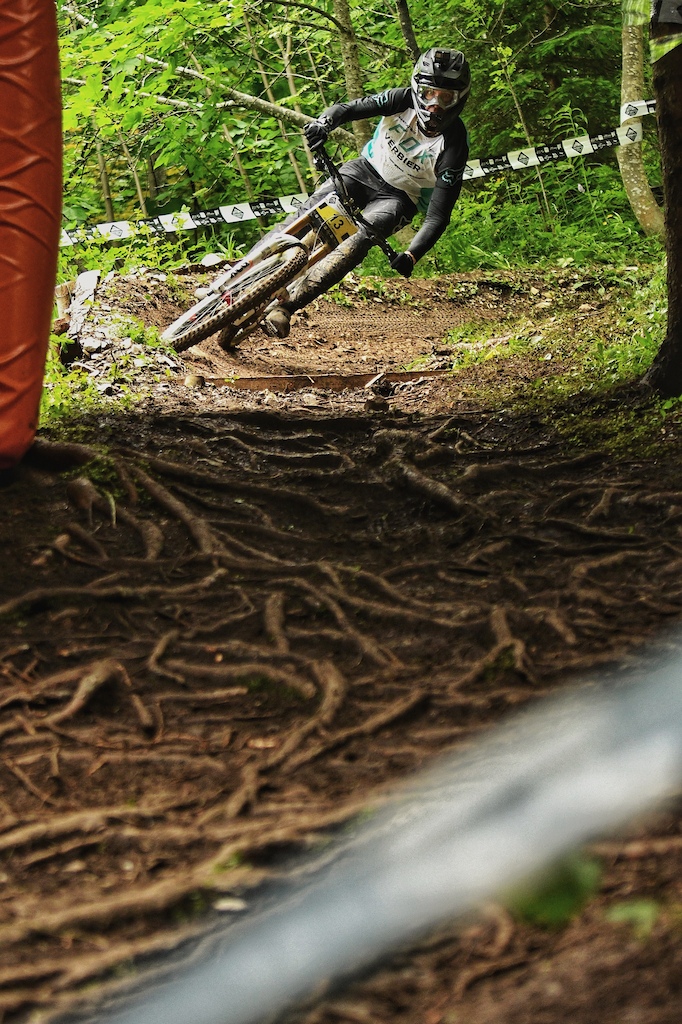 Greasy roots were waiting to catch some riders out last week-end
In the men's race, Yannick Baechler won his first Swiss champion title with a time of 3min38. The 20-year-old from Fribourg relegated Noel Niederberger and Jérôme Caroli to second and third place. "My race went very well, I was able to ride as I imagined. I was always the best Swiss rider in the last World Cups. So I was hoping to achieve my performance here as well. This title means a lot to me", says the new Swiss champion. His little brother Nicolas won the title in the junior category, while Delia Da Mocogno won the U19 girls' category. 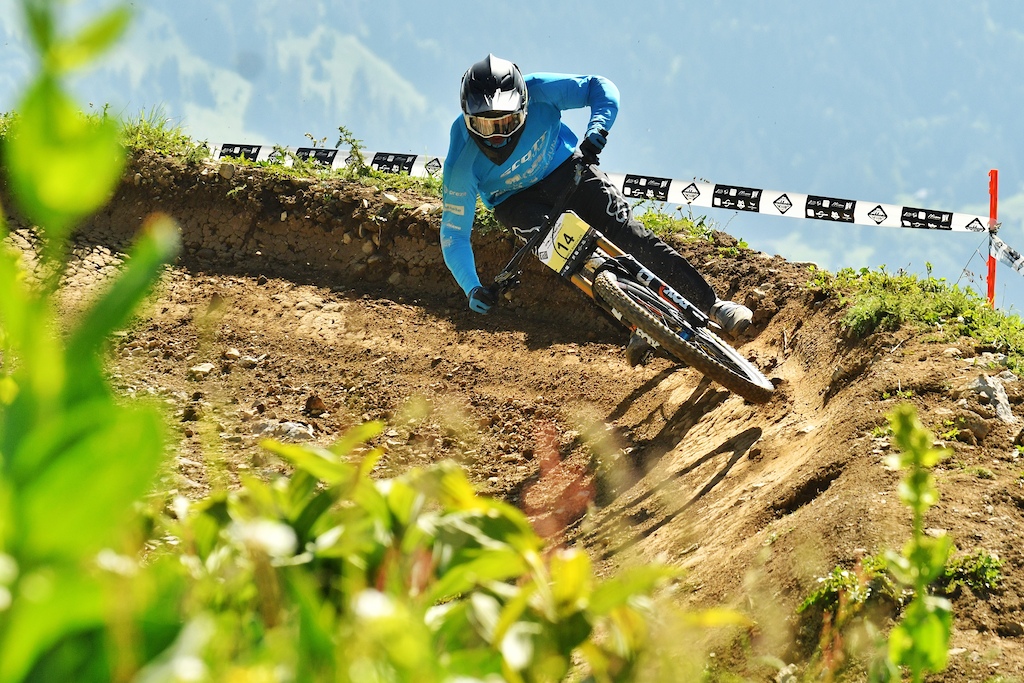 Yannick Baechler with the charging mode in the bikepark berms of the first part. 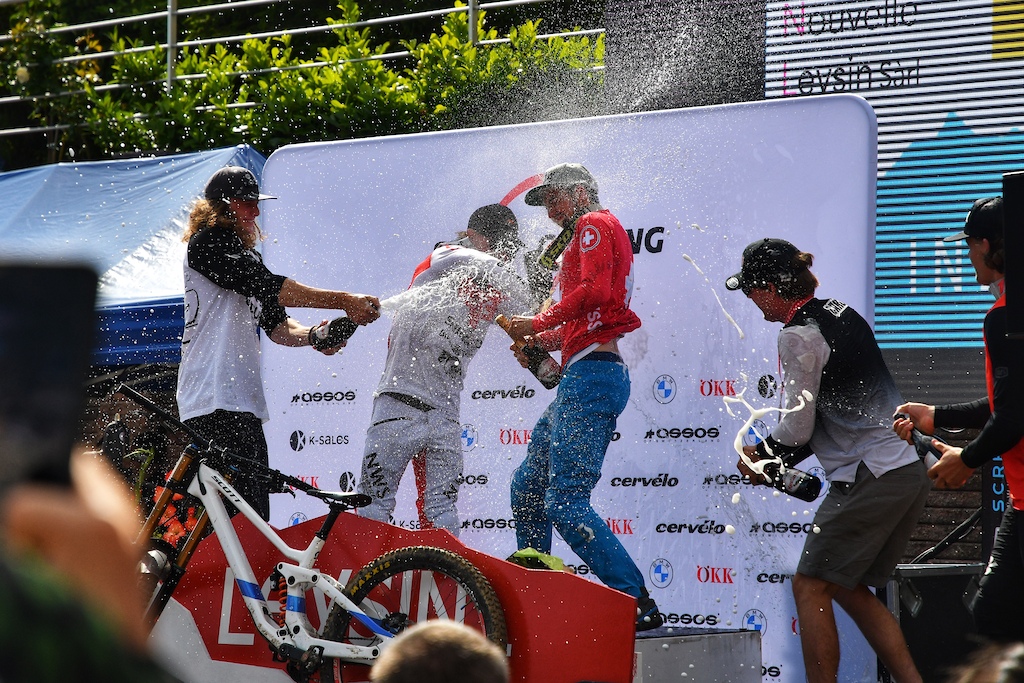 
In the women's category, the title holder and world champion Camille Balanche won the title with a time of 4min09 and 10sec ahead of her runner-up Emilie Siegenthaler. "I had a very good race. I also reached my target time, so I'm very satisfied", says the Biel-based athlete, who wins her second national title. "I really wanted to keep this title and I am very proud to have taken this Swiss champion's jersey". 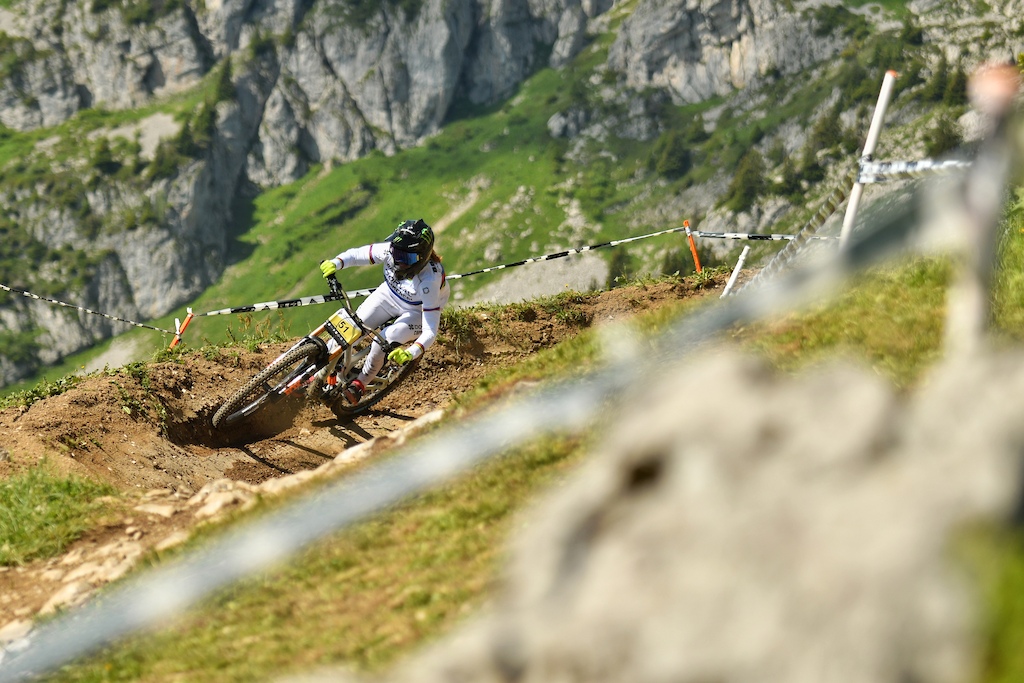 Camille Balanche was riding really clean and fast during the finals. 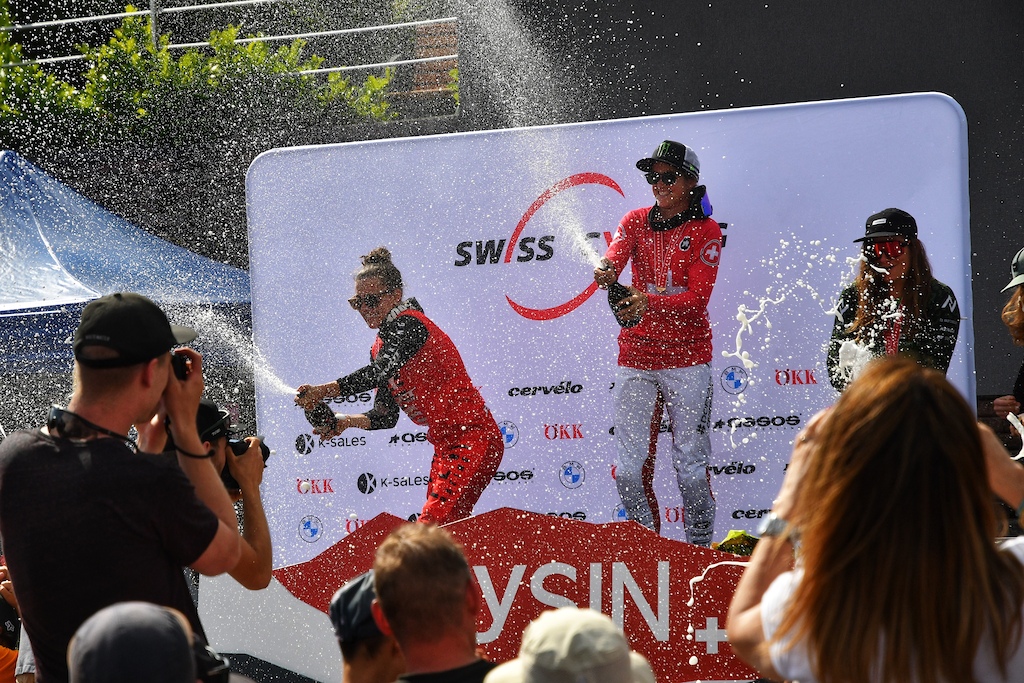 Champaign showers for the fans.


Another legend of those 2021 Swiss Championships was Alessio Tonoli. The former BMX rider was racing in the elites category and throwing down impressive tricks even in his race run! He took an impressive 18th place (riding on his enduro bike, flat pedals, jeans and vans shoes) and made the show for the public all weekend long on the last section of the track. Huge thanks to Alessio for keeping the real vibes up!

20 years after hosting the last World Downhill Championships in 2001, Leysin is once again involved in this spectacular but friendly discipline. Despite the need to impose sanitary measures, which have been relaxed since July 1st, but which are still very much present, the Bike Village was a convivial place with numerous activities for young and old which were very much appreciated by the participants and other visitors.

Leysin will host 2 more editions of the Swiss Championships until 2028, as the resort has signed a partnership with Swiss Cycling. 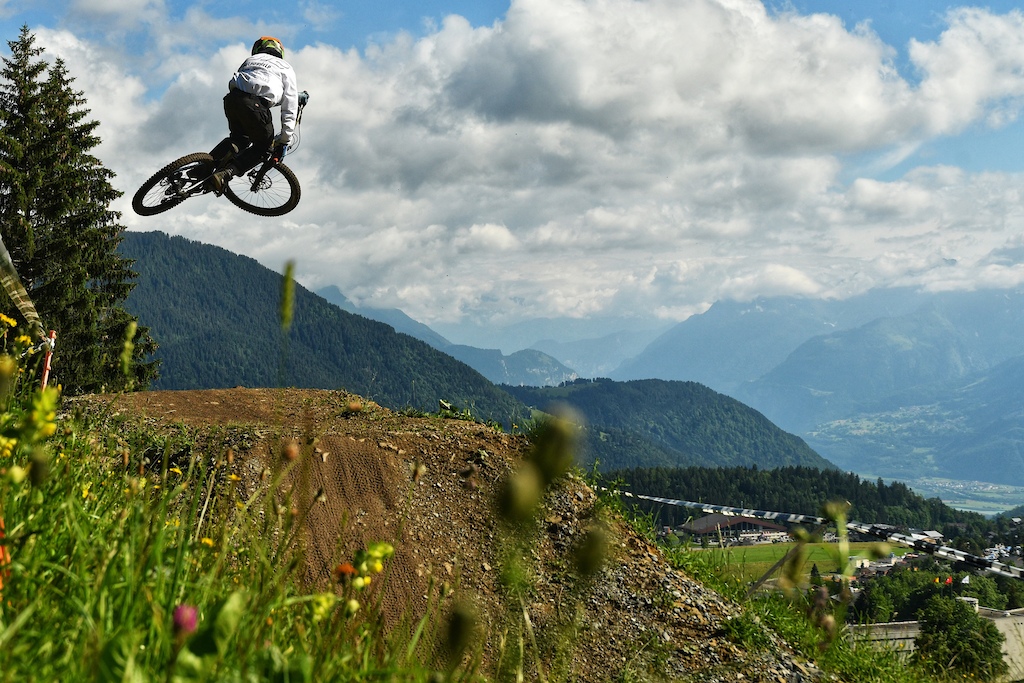 Style for miles for Alessio Tonoli.
As for the "Leysin Unchained" Bike Festival, the organizers want to repeat the event every year in the Vaud resort with the same concept: a festival filled with entertainment, stands and concerts as well as a competition in one of the various mountain bike disciplines. "The aim is to offer a great weekend of conviviality, sport and celebration around mountain biking, whether or not you are a practitioner. The idea is really to vary the disciplines each year so that the event remains original and that all the mountain bike practices and infrastructures available here in Leysin can be put forward" explains Christophe Baer, the vice-president of the Leysin Freestyle Events association which organises events linked to freestyle sports in Leysin in winter as well as in summer.

The future looks bright for the destination and mountain biking in general in the canton of Vaud.

All the information about the Leysin Bike Park here: Leysin bikepark website

Thanks to the following partners for bringing racing back in Leysin.

See you this summer on the trails! 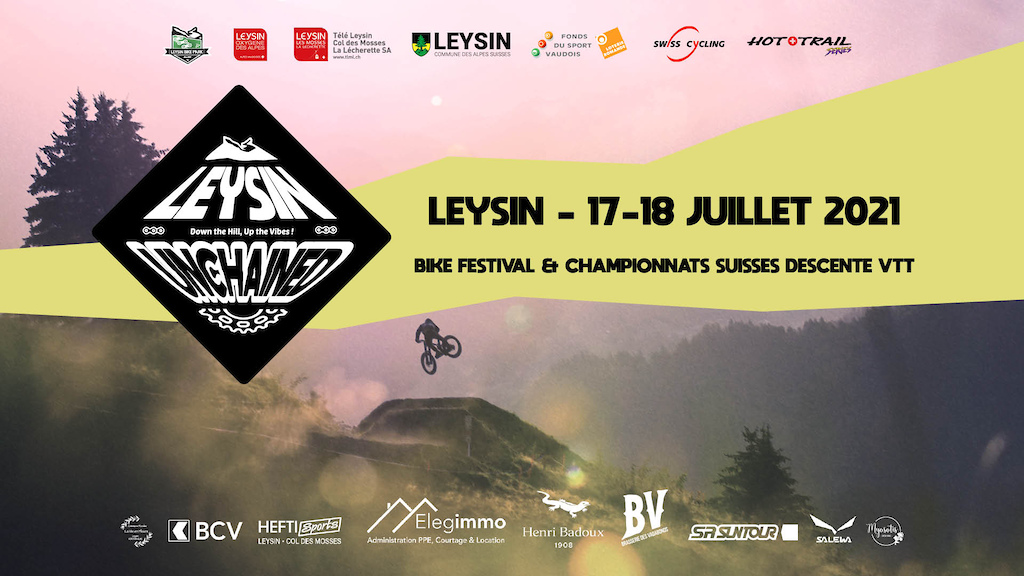 See you this summer in Leysin!