After Lošinj, Maribor, Trbovlje and Soriška planina the 2019 season, third of the Unior Downhill Cup series, ended at the venue which quickly became a classic for Slovenian downhill racing. Cerkno bike park with its elevation drop of 340m offers a fast 1.7km track with a variety of technical sections. The 6-seater chairlift which takes the riders from bottom to start in just 4 minutes is a welcome bonus.

There was a mix of opinions among the riders about the two new sections on the track but in the end, it was the same for everyone and the conditions were perfect on this sunny early fall weekend. 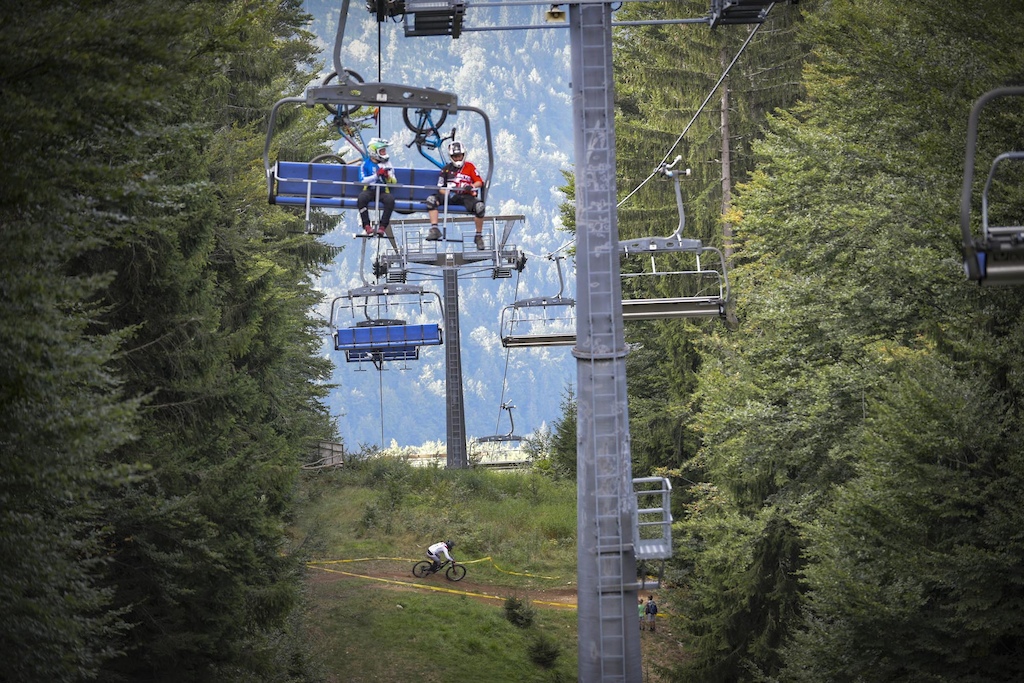 Cerkno bike park in Western Slovenia
Sunday’s seeding run already proved to be exciting. Žabjek was over 4 seconds ahead of the rest and was looking forward to the overall title, but behind him three riders squeezed into .16 of a second from 2nd to 4th place: the Austrian based rider Aleš Virtič (SU Bikestore Team), the DH Sorica winner Rudi Pintar (Sinter Brakes Team) and last year’s Cerkno winner Luka Berginc (KK Črn trn/Blackthorn). 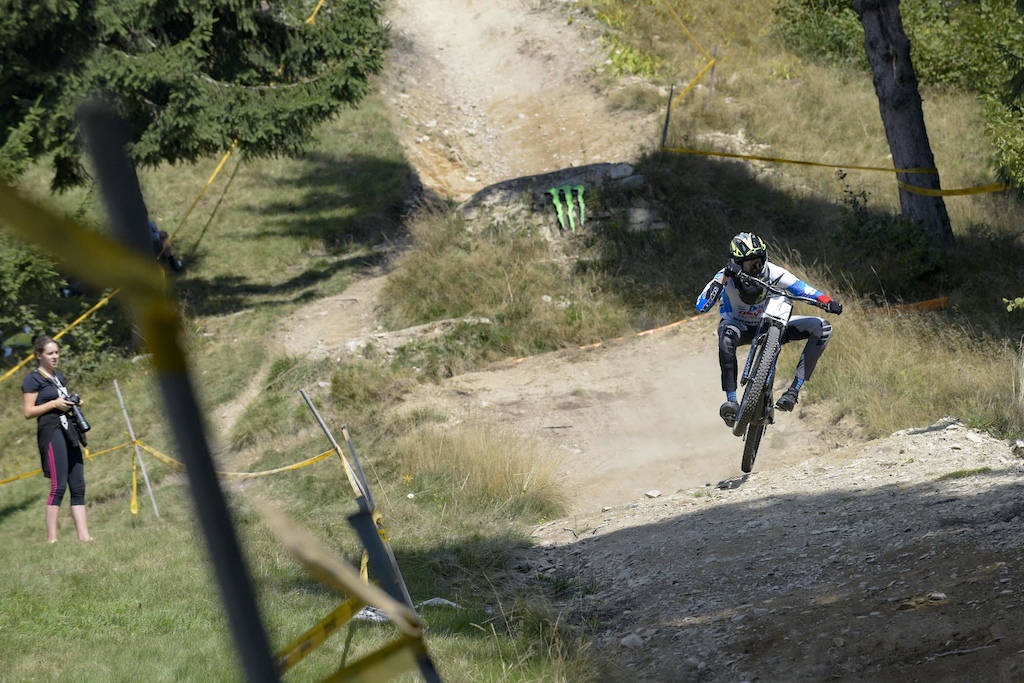 In his final run Berginc jumped out of the even three, improved on his time by almost 4 seconds and stayed in the hot seat after the runs of Pintar and Virtič. Pintar got ahead of Virtič by just 0.01! Žabjek flew down the track as last, recording the fastest time of the day at 2:15.51, 2.33 ahead of Berginc. 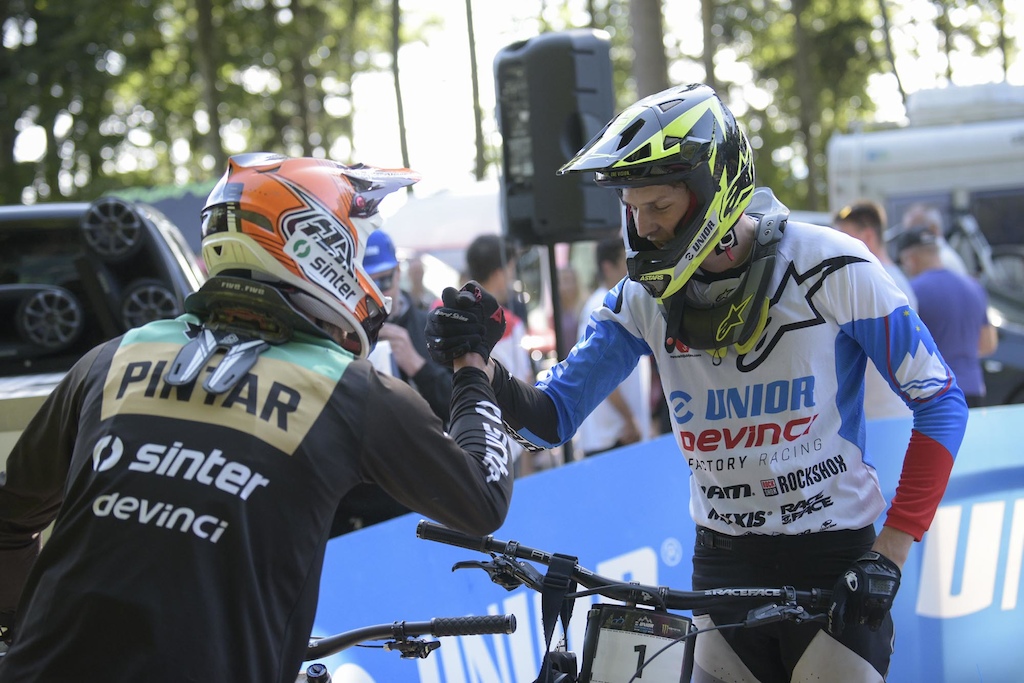 Pintar and Žabjek
Žabjek became Unior DH Cup series champion for the second time, his first title is from 2017. He collected 1200 points by winning all runs at Lošinj, Maribor, Trbovlje and Cerkno. Pintar finished in second with 986 points and Berginc in third with 830. 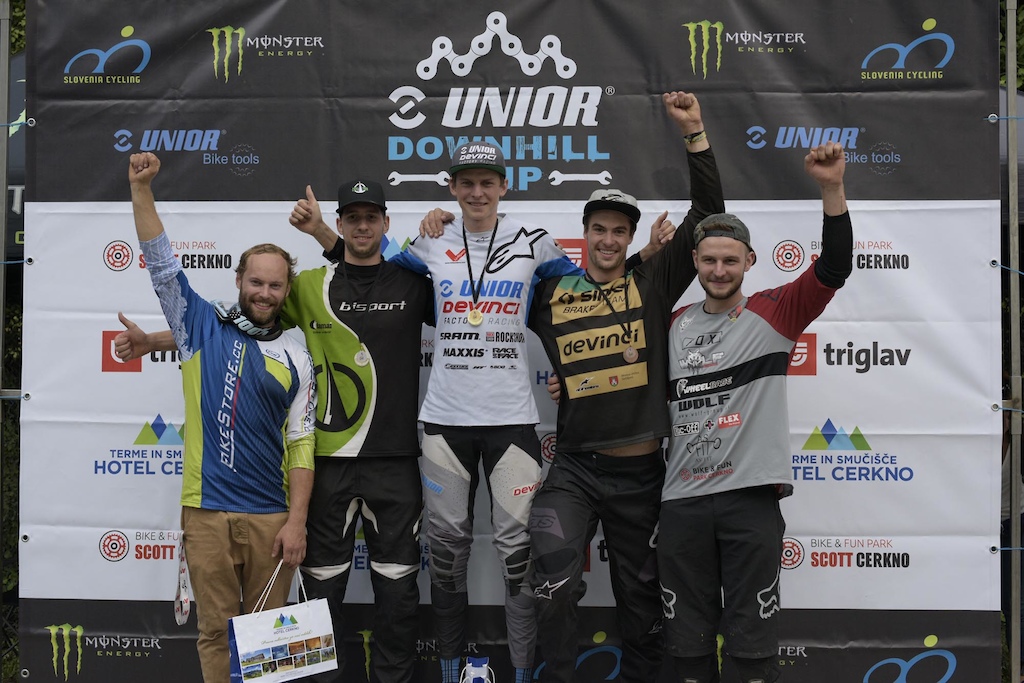 Top 5 elite men from left: Aleš Virtič, Luka Berginc, Jure Žabjek, Rudi Pintar and Matic Kokelj
“It went okay, I had I busy week since I’m wrapping up my University studies and I’m still tired and jet-lagged from US,” said Jure. “I didn’t want to risk too much, the plan was to stay healthy to start preparing for next season. So I’m happy to win and be okay. The track was great and it was overall a great weekend. The guys behind me were close together but it was expected on a short track. I was surprised with Vauh’s chainless times since it’s almost uphill out of the start gate. He set a great time after not being on a DH bike for a while. I hope some more Slovenians will join me in the World Cup in the future.”

Niemiz was fastest junior once again. He won with the time of 2:20.50, fifth fastest overall. Žan Pirš finished second 5.35 down and Žak Gomilšček moved into third. Triple win for the black-gold-green of Sinter Brakes Team, the Unior/Devinci Factory development squad. 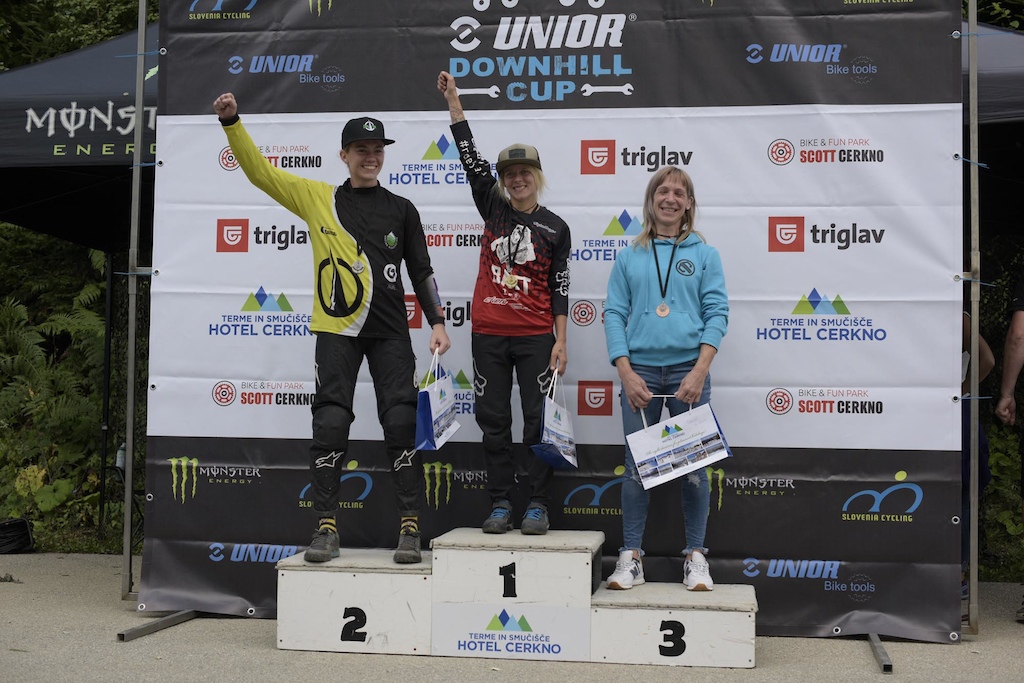 Women's podium with amateur rider Saša Bevk in third
Katarina Primožič was on top in women’s final but the overall title went to junior Naja Stipanič.

It was an exciting race in U17 category as well with Nace Kokelj (Wolf Racing Team) beating Črtomir Svetec (Supersnurf) in both runs and taking the overall title from him by 30 points. 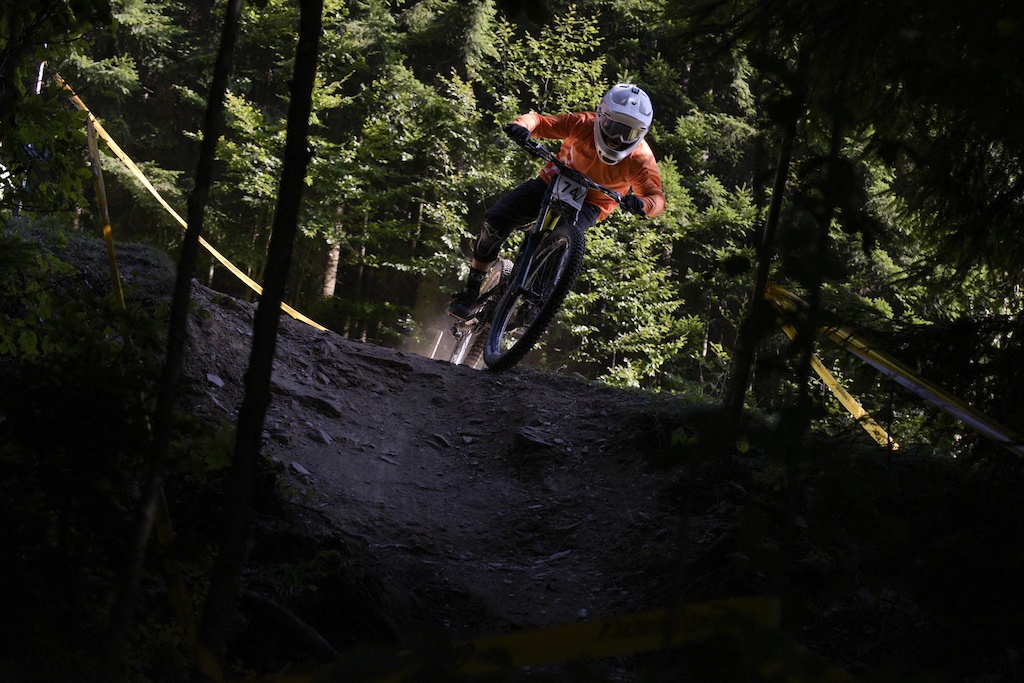 Val Celestina
U15, the youngest category, has never been as wild as this year. Rookie Val Celestina (KK Črn trn) took his second win in a row, this time under 19 seconds behind Žabjek. Frane Medić (BK Crikvenica) won the overall title.

In the masters category, the overall title went to Gašper Jereb (ŠKTD Avče) who collected just 30 points more than Boštjan Volf (Wolf Racing Team). Once again Wolf was faster but they were both smoked by four-time elite national champion Miran Vauh who returned to racing and premiered in this category. It was also his first race for DH Visit Pohorje team. Of course, chainless and with a time that would earn him a 5th in the elite category!

Matic Kokl (MTB klub Kranj) won his second amateur category race in a row but he missed the first two races of the series so the overall title goes to second-placed Andreas Vidovič (DH Visit Pohorje).

So, this was the 2019 Slovenian downhill racing season. The series trophies will be handed out in November at the annual Slovenia Cycling MTB & BMX Commission event. Thank you Cerkno bike park and Pedal Racing Team for hosting a great final race. We hope to see all the events back on the 2020 calendar!