Following her first ever mountain bike race, it took Anne Tauber a mere 4 ½ years to achieve a podium finish at the XC World Cup in Stellenbosch. Now, she is firmly established among the world’s top names in mountain biking.

Anne’s athletic career is one of a kind, filled with twists and turns that no one could have predicted. What do we mean by this? In her youth, Anne divided her time between school and speed skating. She initially practised the national sport of her home country, the Netherlands, to all official Olympic distances of 5,000 m and below. However, over time she noticed that she was better suited to longer distances. During this time, she often spent her summers training on her bike. Frequently bored by the long stretches of road, she sometimes left the asphalt in search of more interesting terrain. Fate dealt her a major blow when she was diagnosed with glandular fever at the age of 18. 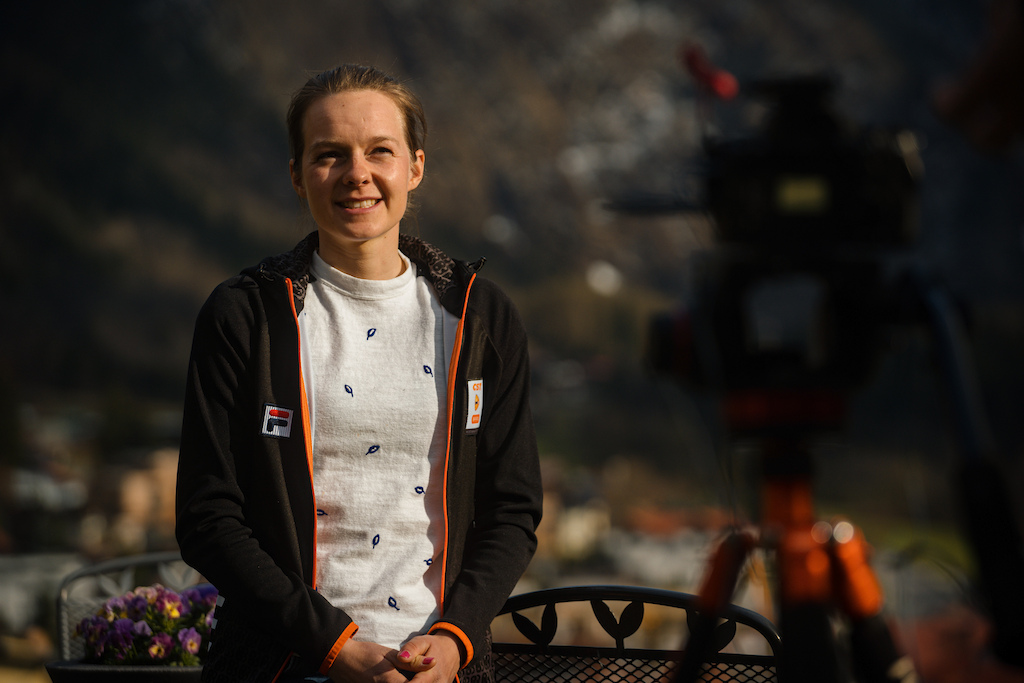 From Biking as a Hobby to Racing Ambitions
After her recovery, her bike was supposed to be her ticket with which to get back into shape: cycling in summer, followed by an ice-skating marathon in winter. But then the bike began to win her over. Today, she talks not only about how much she enjoys cycling, but also about the sense of freedom it gives her. She took part in her first cross-country race in Zoetermeer in 2013. In terms of results, the race did not go well for Anne. However, though she had no real idea what she was doing, had only the most basic equipment and little to no cross-country expertise, she had the time of her life. Thus, she decided to invest in some better equipment and discover the discipline of cross-country racing for herself. She continued to spend her winters on the ice. She placed sixth in the Dutch Championships in summer 2014 and competed in the U23 World Cup in 2015. Looking back, she describes her first World Cup at Nové Město as a turning point in her career. When she first saw the trail, she was gripped by pure terror. She was convinced that she would not be able to master such a challenge. 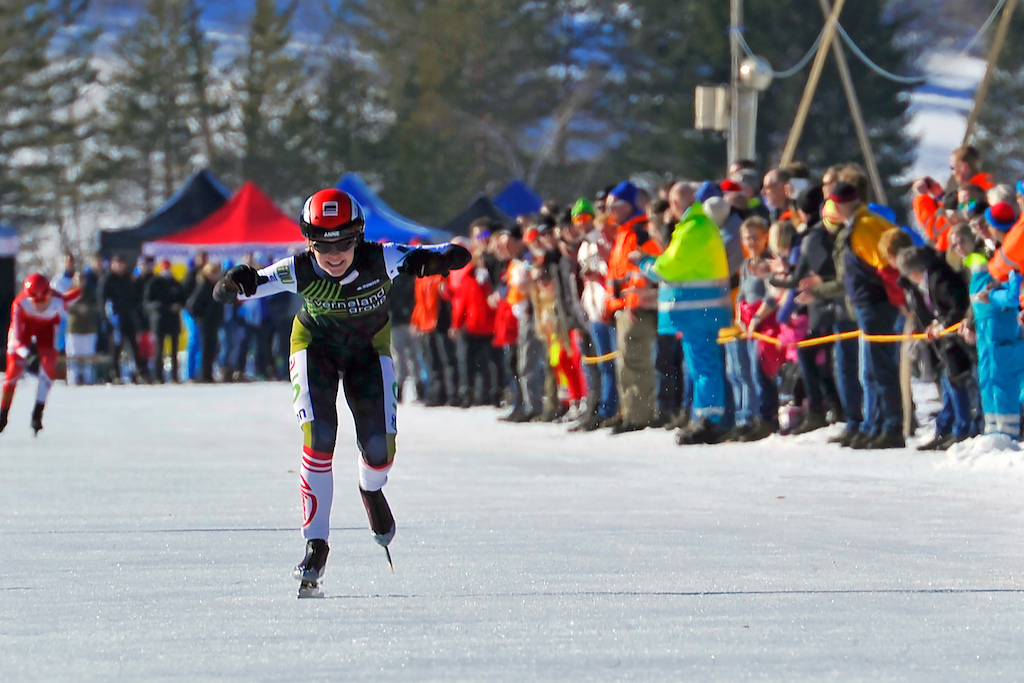 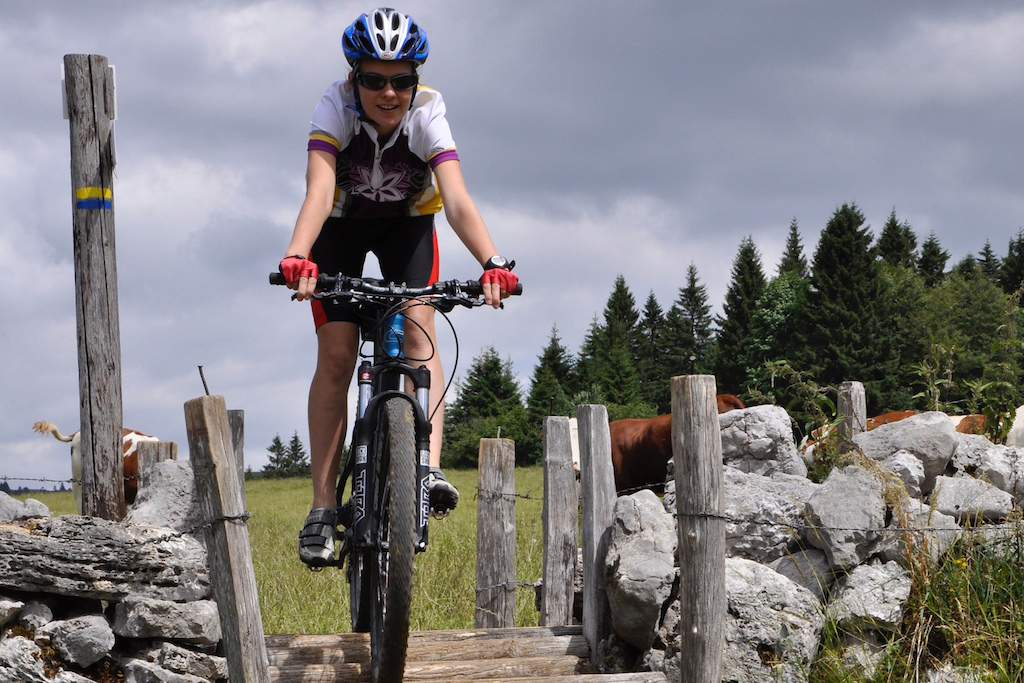 Enjoyment as a Driver for Motivation
Anne’s mountain biking career could have ended right there. But she was not about to give up so easily. Facing her fears head-on, she took her hardtail to a high-altitude training camp in Andorra to work on her downhill skills. Here, the aim was to improve her riding technique as much as possible. This proved to be the right move. She was able to develop not only a sense of fearlessness but also discover a sense of enjoyment in downhill racing. Others may consider Anne’s method of facing her fears somewhat extreme, but for her, this was the logical thing to do. After all, she enjoys the feeling of freedom, variety and continuous personal development that she is able to achieve when practising mountain biking. 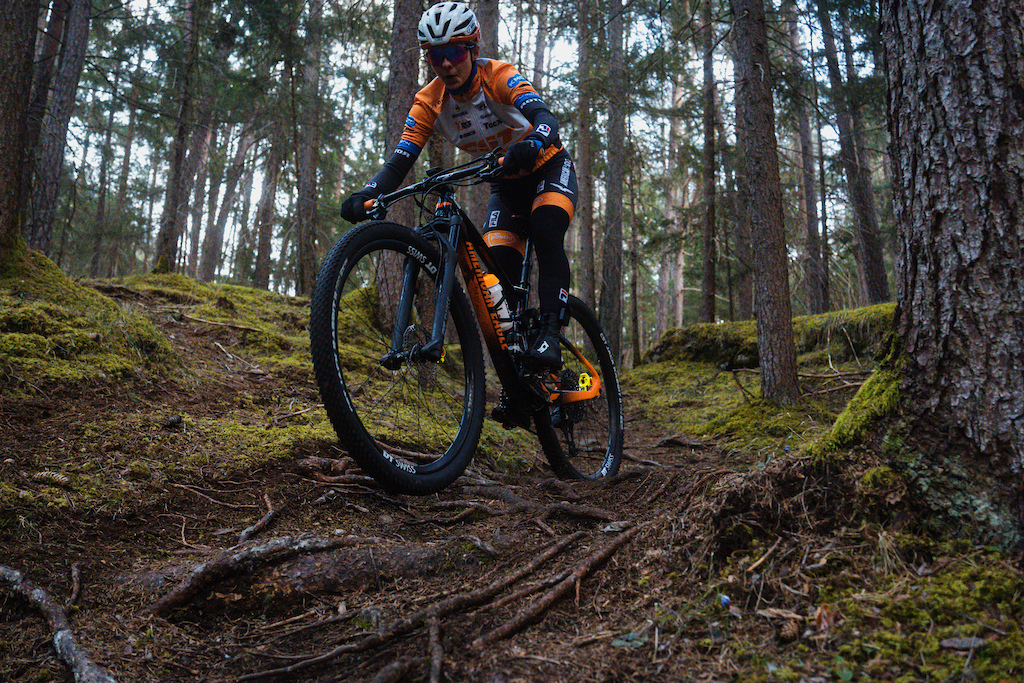 Finding Balance
You only have to speak to Anne about mountain biking to confirm this: the pure, unadulterated joy in her eyes is proof of her passion. Nevertheless, she does mention one difficulty. She is most able to relax when out and about in nature and in the woods. However, this is something she prefers doing on her bike, meaning that she spends a lot of time in the saddle. She does manage to shake things up through activities which demand a certain level of skill, such as slacklining or unicycling. However, as you might suspect, her unicycle is by no means standard issue. She has done away with a saddle and prioritises practising tricks over comfort. Unicycling is a skill that she picked up at the age of seven when she attended a circus group for children. This was an experience that provided her with a solid foundation of cycling and motor skills. However, above all, the circus group was a place where she was able to build up and develop a sense of playfulness – something which she has kept to this day. 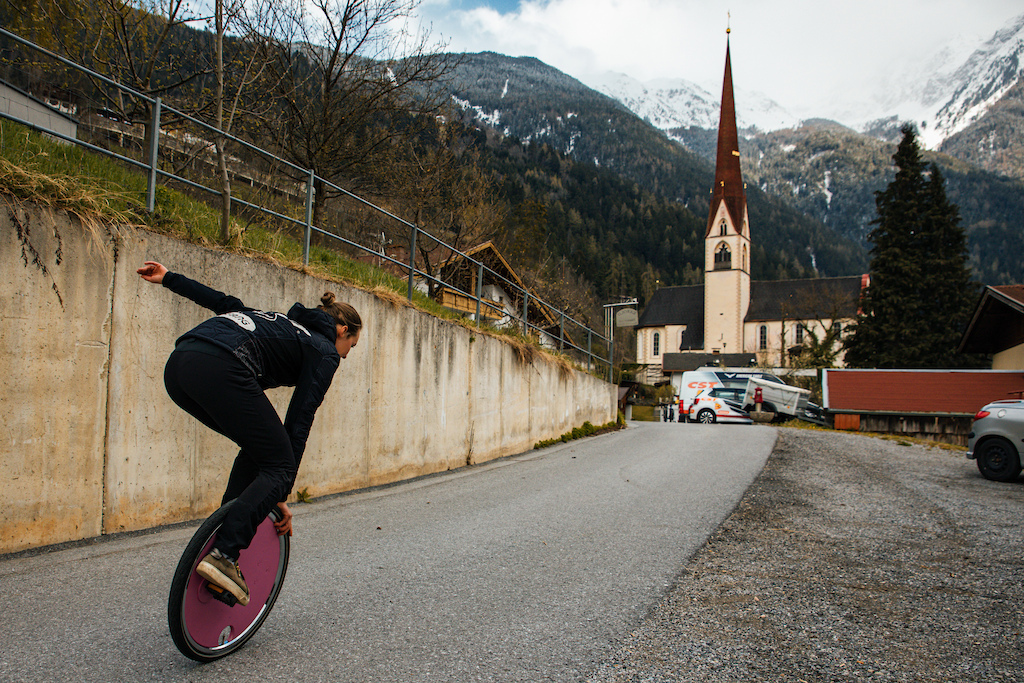 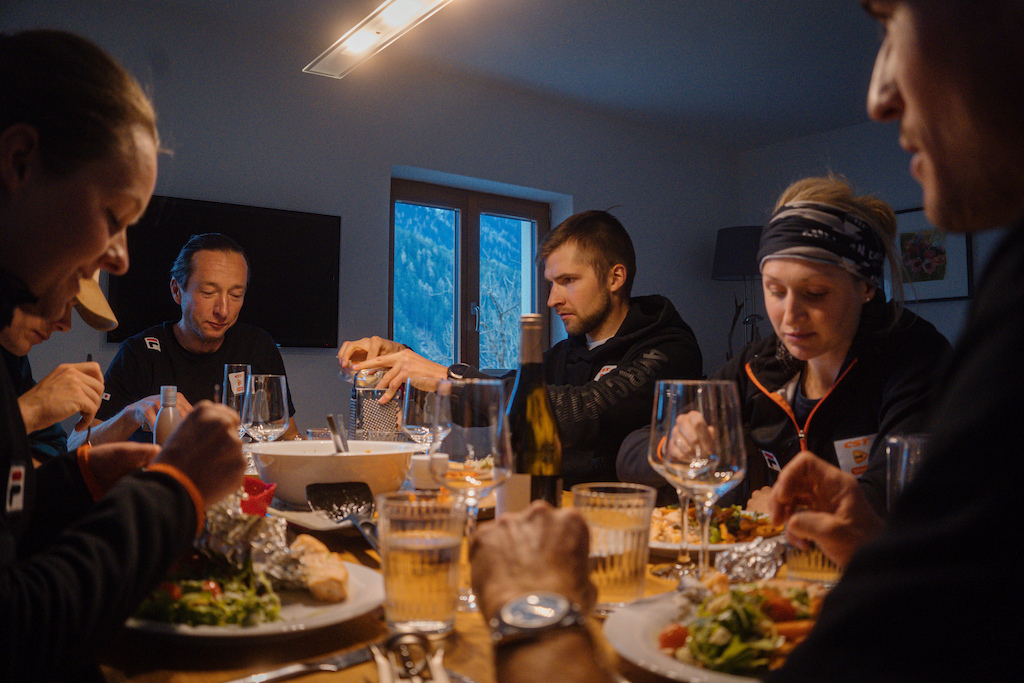 Anne enjoys taking on new challenges and pushing herself. This in turn also complements her playful instinct and ensures that, when she wants to achieve something, she can be very determined. Maybe these two characteristics in particular are key to defining her style of biking. When not racing, she gives in to her playful side, embracing opportunities for variation and freedom. On racing weekends, she keeps a clearer head, remaining focussed and taking a more structured approach to anything that comes her way. Maybe this is the reason that she is able to relax when mountain biking. In any case, mountain biking has opened up an entire new world for Anne – one filled with the buzz of racing, travelling and success. It is a world with great freedom, but also with its own structure. Not that she hasn’t had to work hard for her success. She has consistently confronted her challenges and didn’t let her initial pursuits on the ice stop her from taking her professional sporting career in a completely new direction. So, #whostopsyou? 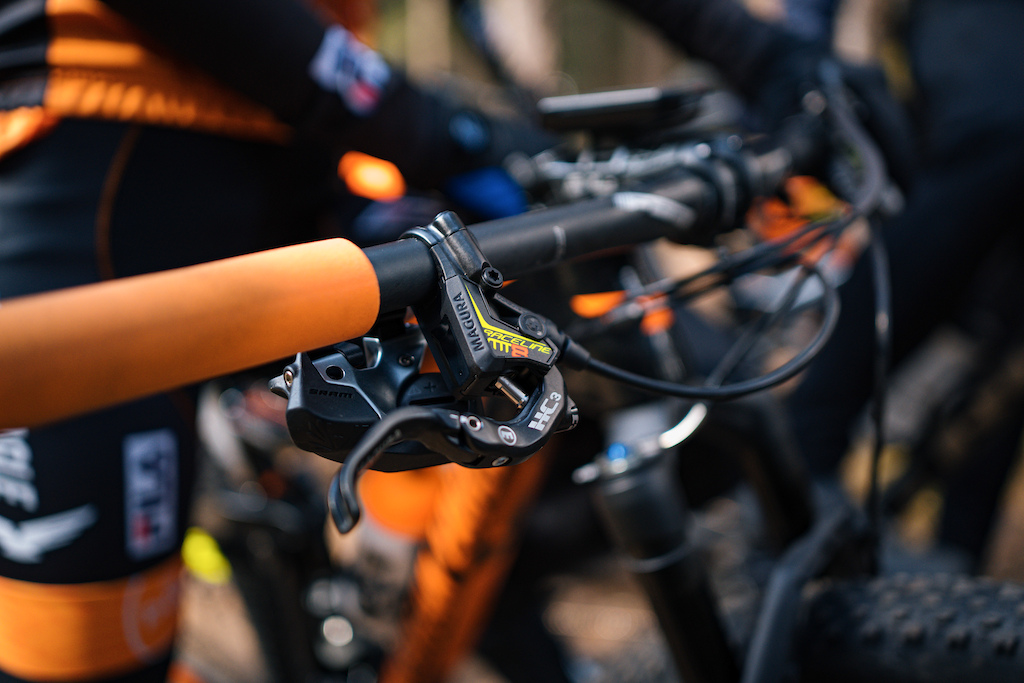 Anne’s Set-Up:
Brakes: MT8 Raceline, RRP €599.80
Rotors: STORM SL.2, 160 mm, RRP €35.00
Lever Blade: HC3 lever blade, RRP €67.90
MAGURA #whostopsyou Video Series
Everybody has their own motivation and their own particular goal, the path to it is never straightforward or easy. At that, it doesn't matter whether you're a professional athlete, doing it as a hobby or simply ride your bike to work, everybody has their own story of pushing boundaries and redefining the usual.

In this first of five episodes, XC Olympian athlete Anne Tauber told us her unique story. From speed skater to world-class mountain biker in just a few short years!

vinay (Jun 10, 2021 at 4:00)
People who are motivated by fun and playfulness are the most beautiful. Picking up different balance skills is never a bad thing and unicycling and slacklining are the ones anyone can pick up without much risk or high financial investments. That said, the tool in the picture isn't called a unicycle, but an ultimate wheel. That said, if she likes both unicycling and mountainbiking, she should definitely get a MUNi (if she doesn't have one already).

Adamrideshisbike (Jun 10, 2021 at 5:02)
Speed skaters are animals! Not surprised she finds a way to crush on a bicycle as well.

yonderboy (Jun 10, 2021 at 8:15)
Back when I was a track addict, a lot of my fellow riders would do short track speed skating in the winter as a way to keep fit.

GertV (Jun 10, 2021 at 12:47)
American Eagle. The bike-brand Bart Brentjens raced to gold at the Olympics in Atlanta in 1996, although that bike was a Storck in disguise. I believe Bart himself has played his part in the ressurection of the bikebrand a couple of years ago.