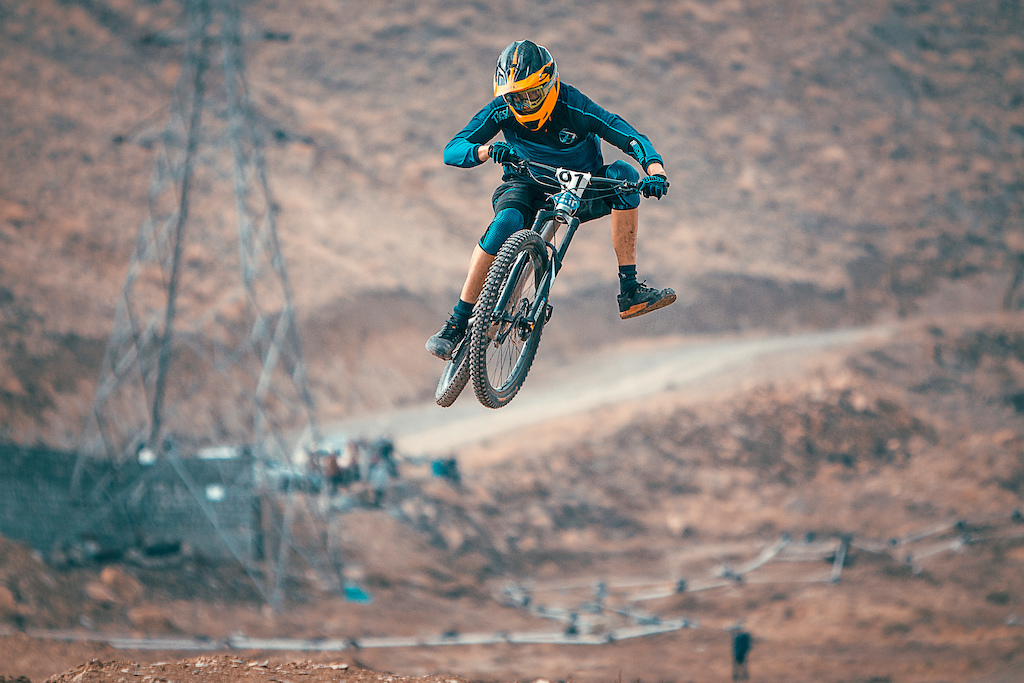 With our video series "We Develop a Bike Frame" we documented one of our biggest dreams coming to reality. Our idea was to design and build a high pivot point enduro bike which stays active on the brake, accelerates and climbs like a trail bike but sends like a DH bike.

Big dream, we know! But we can pretty much tell that we did it. These three videos show you how we struggled to build the frame, how we built an actual test bike and the riding impressions over the first four months of testing. If you want to start the story from the beginning you should check out the first two articles, you will get the details of our concept, learn about kinematics and see how the frame was manufactured.

The subtitle "From Idea to Prototype" basically already says it, the first season will end with the successfully built and tested the prototype in this article. But as so many people got so excited about the project we are planning on a second season which will document the journey from Prototype to Market Release. We are super excited to share all of this with you guys and we really value your feedback.

As a German Developer, we recorded the videos in our mother language but we provide English Subtitles for our international audience (click CC in the lower right).

We Develop a Bike Frame / E11 // Bike Frame Assembly
In this episode, we struggle building the first prototype due to some misalignment. This can happen and that's why we build prototypes but it's hard to deal with if you are so keen for the ride. At first, we discussed to not showing the video like anybody else but we wanted to be 100% on the project and show success and failure. 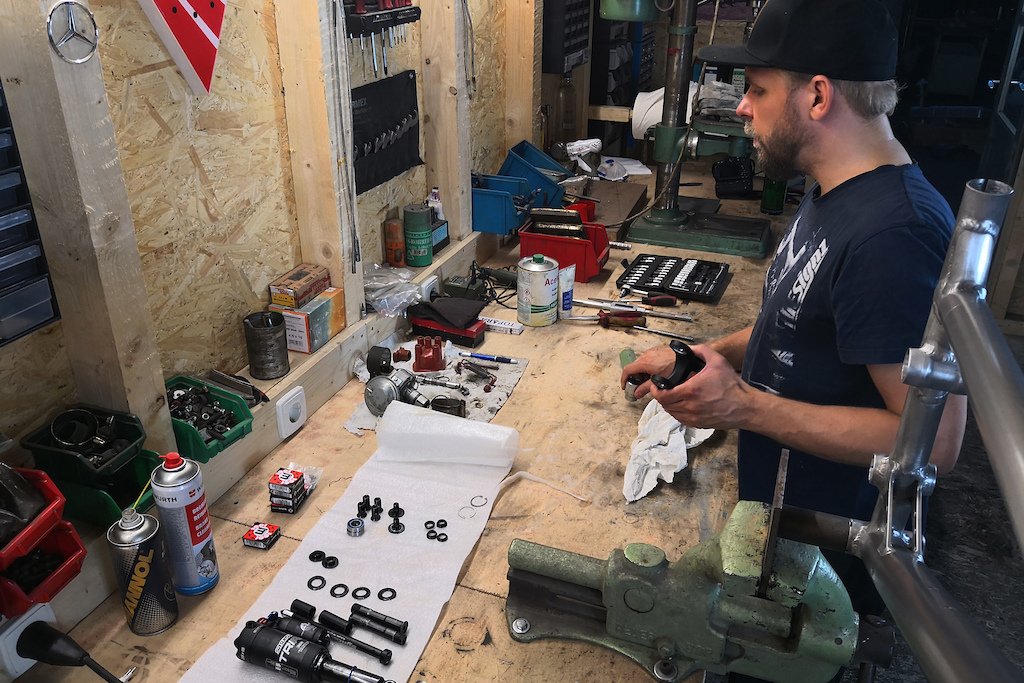 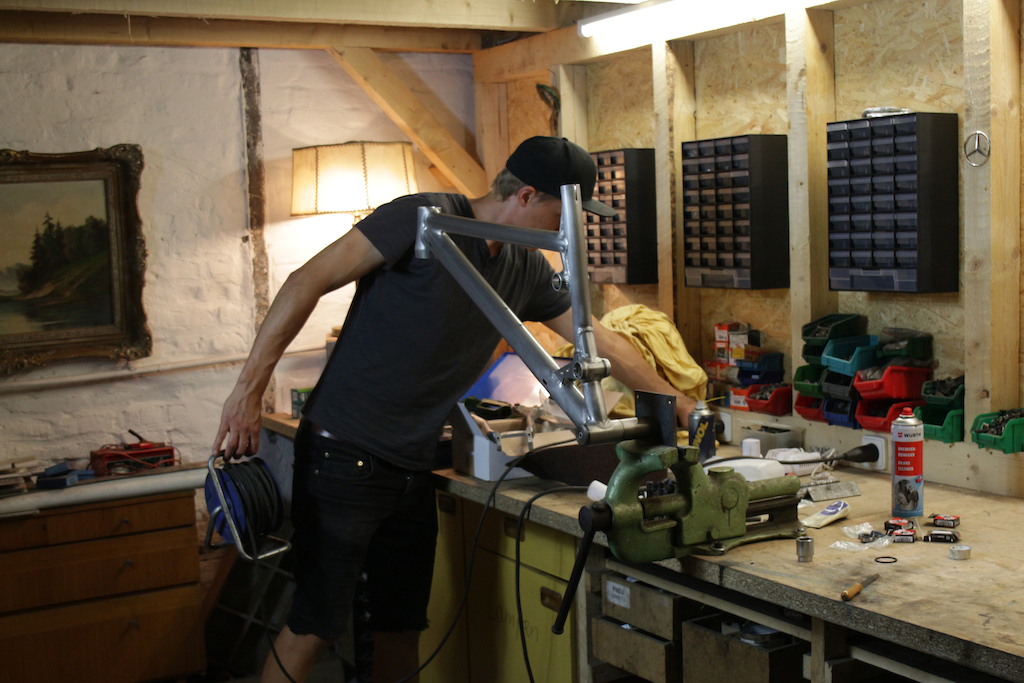 Giaco and Stefan from 77designz assembling the first prototype 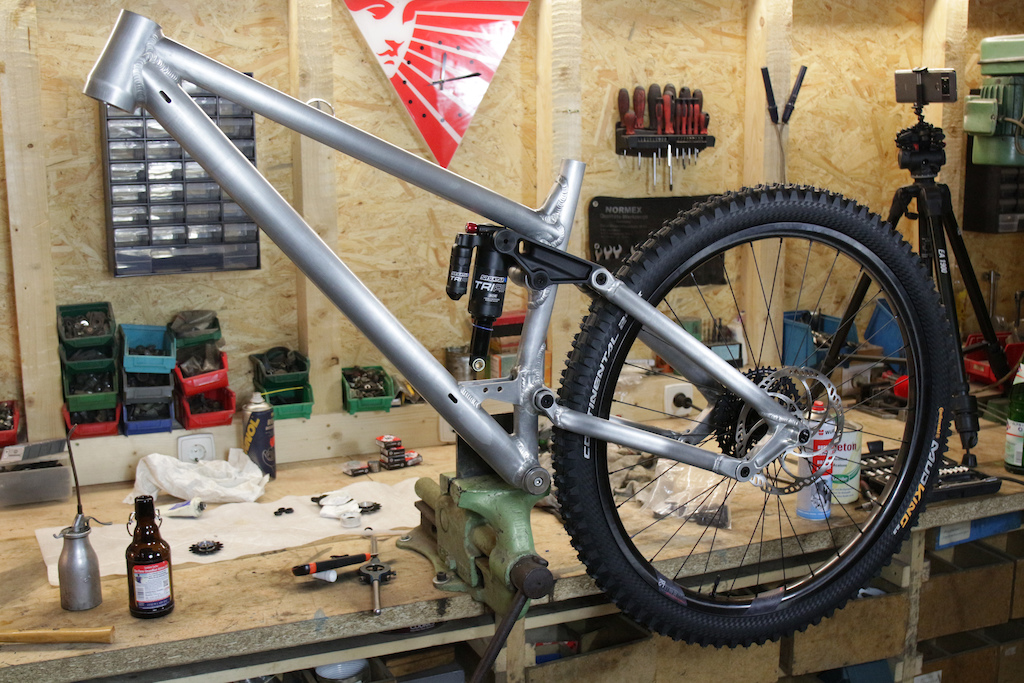 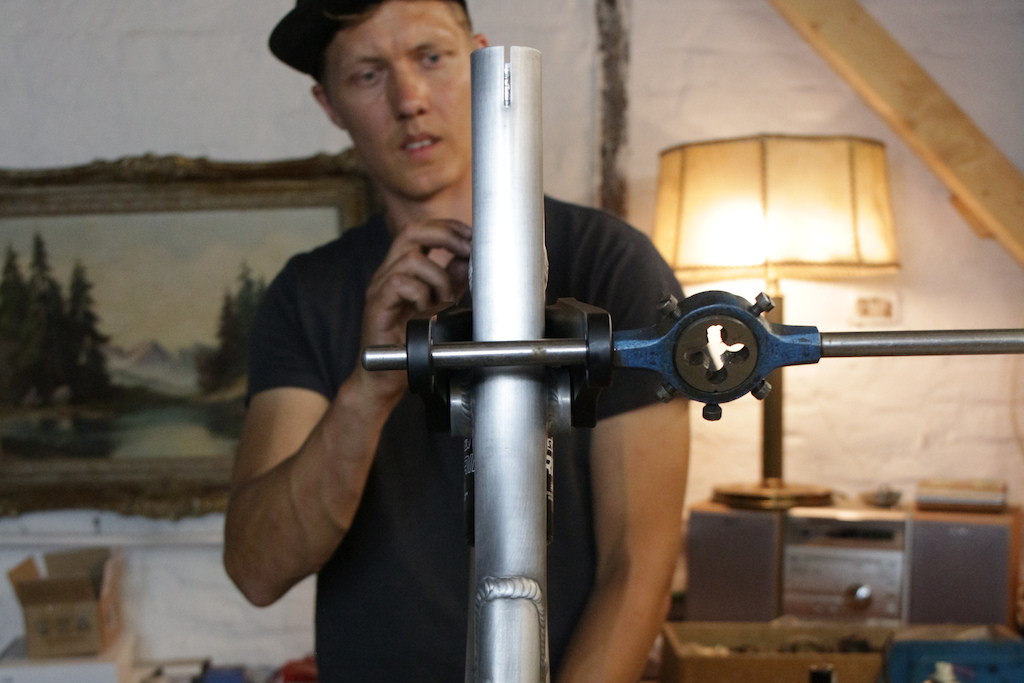 Finding a misalignment, what a hard day it was.

We Develop a Bike Frame / E12 // Bike Assembly
In this episode, Giacomo finally builds the first complete bike. It actually happened after he had a hard time working around the alignment issue. 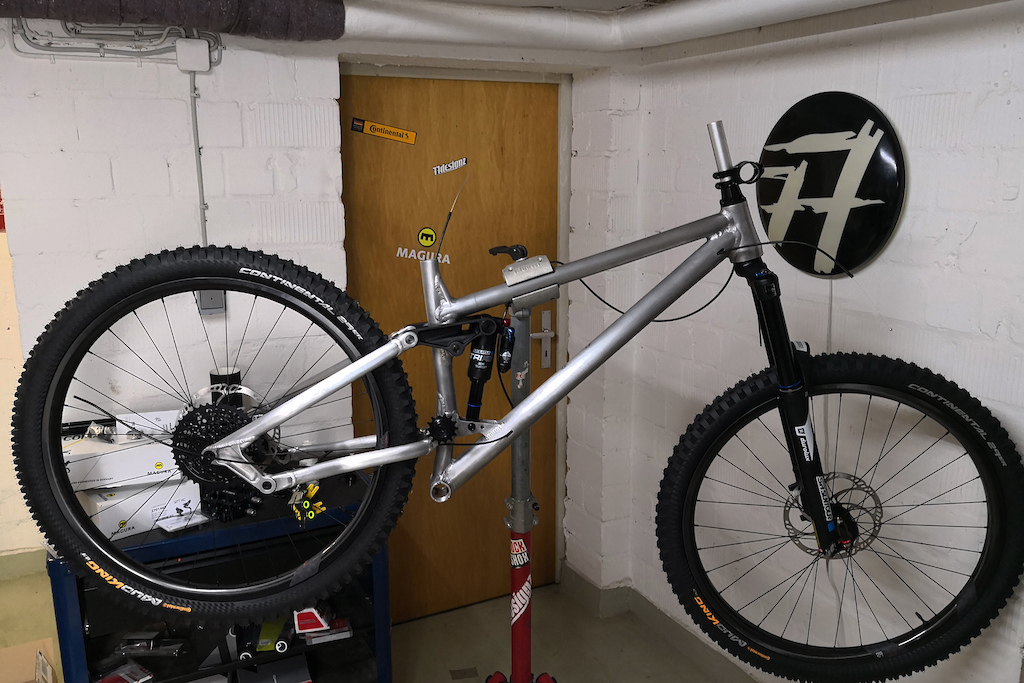 We Develop a Bike Frame / E13 // Field Testing
In this episode, we are finally riding the prototype and we are super stoked on what we have achieved. 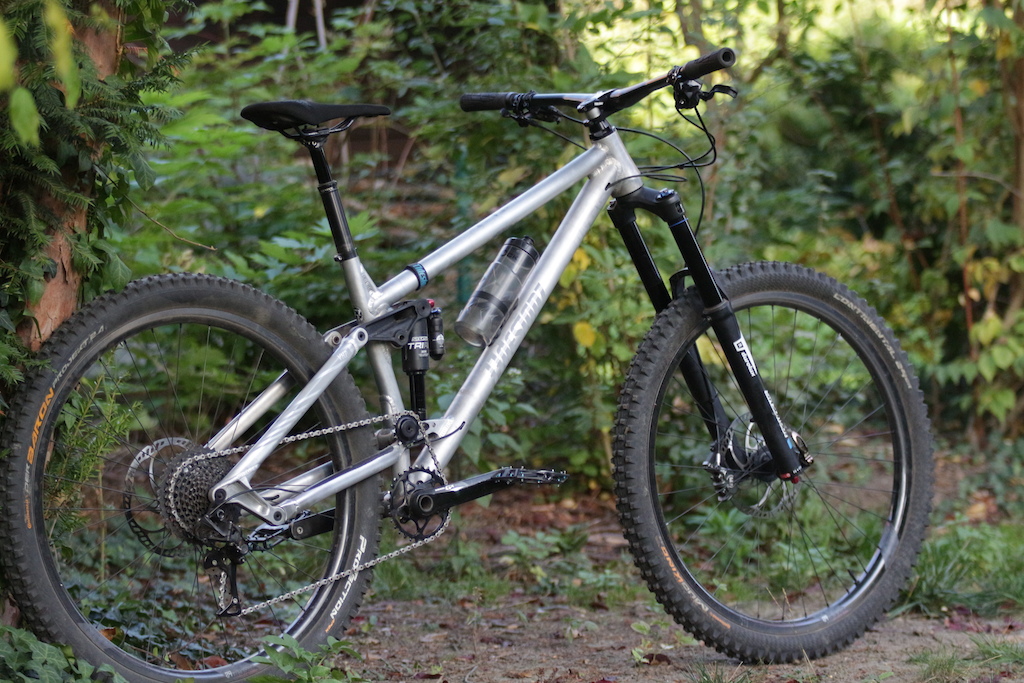 The first protype of the 29" VHP Enduro Bike 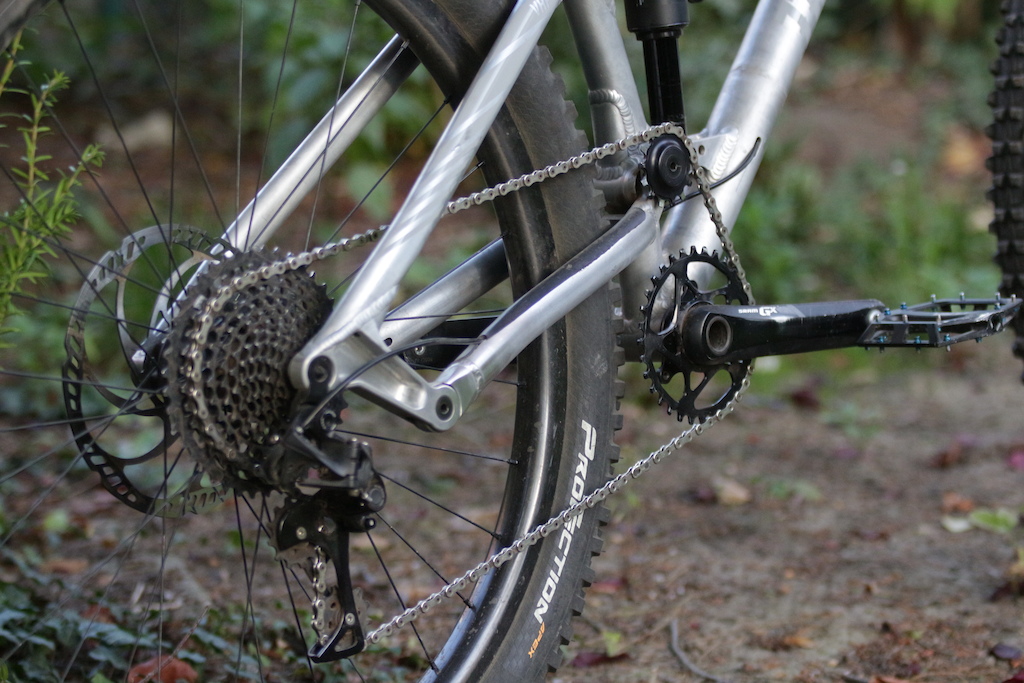 The chain get rerouted using an idler pulley to design the Anti Squat
What are the next steps.

Right now we are fixing design issues and optimizing manufacturability in order to produce the pilot production sometime in spring. One of the frames will go for fatigue testing and the others to close friends. If everything works as planned we will be able to accept orders sometime in autumn. It's a huge step for us as we are a small components brand but as we are so convinced by the performance of the concept we really want to offer the frame to a larger audience. We will share the whole journey here and on YouTube so you better sign up.

fluider (Jan 15, 2019 at 0:31)
I am super stoked for each one of these home designers turned to business project pioneers trying to earn their space under the sun. This is a great time, because knowledge, design and manufacturing technology got so much accessible that even home enthusiasts are in fact able to try their luck. Sure, they profit from resources made available by large manufacturers but let's be honest, large manufacturers grew upon resources of other industries. If things don't mess up in the world we can see a trend of small designers and businesses change the face of MTB, I think. You will see that boom once a 3D printed metals will become financially affordable.

DrSam (Jan 15, 2019 at 2:41)
I've had the external rear brake hose cut by a sharp rock before. Didn't notice till I approach a steep and twisty section. All I can say I was lucky that day.

silvbullit (Jan 15, 2019 at 17:11)
@DrSam: 30 years riding, racing, and wrenching at shops. Only seen a rear brake hose damaged once and it was an under-the-bottom-bracket routed hose and it merely crushed it and the brake was still useable. Only other failure I have seen was a line ripped out of the master cylinder from a violent crash which, obviously, isn't remedied with internal routing.

You guessed it right, it was routed below the bottom bracket (stupid design). Anyways, I remedied the issue by getting a steel braided hose. So far so good.

freestyIAM (Jan 15, 2019 at 20:53)
@Clarkeh: why not dropper too? As long as it's base and not head actuated you don't have the hose movement. Recabling is a breeze. I love my fox transfer 150 external post. I don't get why the aren't more popular.

Giacomo77 (Jan 16, 2019 at 0:39)
We hear that a lot and consider to offer an external option too. The Frames will be Handmade in Germany so we have no problem to react on such things.

StevieJB (Jan 16, 2019 at 0:41)
@ryanandrewrogers: agreed. last year on a weeks riding holiday in Spain I had a rock fly up and split my rear brake hose, stupid routing under the bottom bracket on my Radon swoop. On replacing the cable I made it all run inside the triangles over the bottom bracket past the linkage and sit on top of the chain stay. Thank god for cable ties. It's not the best looking but on top of the down tube is the safest and most user friendly place for cables.

dh-walters (Jan 16, 2019 at 7:28)
Coming from a guy who's designed and built a few high-pivot DH bikes in my time - I really think that the high-pivot-Horst Link design is the ticket for DH bikes (the new GT fury is the only production bike I'm aware of). Everyone has a different opinion on what a bike's suspension should do while braking. I prefer a bike that remains as active as possible under rear braking - something that the Horst Link excels at. Pair that with the naturally rearward arc of a high pivot, and I think you have a winner. Interesting to see this brought to an enduro bike.

Obviously still in the prototype phase, but I think you'll find that with the limited chain wrap you guys have, you're going to start losing chains very quickly as the narrow-wide ring wears a bit. You're also going to experience a fair amount of chain growth on the slack side of the chain - which will be hard on derailleurs. Might be worth trying an idler pulley tucked up behind the chainring a bit. This will give better chain wrap, and can almost eliminate derailleur-side chain growth. Will introduce a bit of friction, but if designed properly, might not be too noticeable.

Giacomo77 (Jan 17, 2019 at 0:24)
Hey it´s great to hear from you. Allways good to receive feedback from guys with lot´s of experience. We actually didn´t aim for an "as active as possible rear suspension" we aimed for the middle way where we wan´t to conserve the geometry. That keeps weight on the rear wheel and still keeps the suspension open enough. We believe that a low anti rise is only good if you are not racing your bikes. So for most people it´s a good thing.

We also experiment with an lower slider to generate more wrap and less chain growth but testing till now proofed 0 problems losing the chain. But you are 100% right time will tell.

Thanks again for your feedback, G

Rusettipasta (Jan 15, 2019 at 1:19)
A strong contender when time comes for a bike upgrade. Would love to try out a high pivot enduro bike.

zoobab2 (Jan 15, 2019 at 3:36)
Have you outsourced the welding of the frame to an external company? I was expecting some welding in the videos, but could not find... Welding aluminium is an art, even harder then welding steel.

So the next step is to have a complete"open source" bike with full documentation on how to reproduce the frame at home :-)

Here is the welding video: youtu.be/yZmq_GUvM4M

If you follow all of the videos you can kind of DIY ;-)

thanks for sharing and best of luck with the pilot run!

kizzard-ling (Jan 15, 2019 at 17:38)
I cannot imagine the feeling of riding a bike that you developed yourself, after you saw it grow from a pile of tubing to this monster ripping 29r, you guys must be over the moon! this was a great project and has given me the itch to do it myself

Giacomo77 (Jan 16, 2019 at 0:26)
It is litereally one of the best feelings in the world. You spend endless time on the computer and than the whole building process it just takes forever but the reward after wards is just priceless.

lkubica (Jan 15, 2019 at 9:20)
Heheh, this bike is aligned like my Knolly Chilcotin, you guys can safely order a batch and sell them

lkubica (Jan 16, 2019 at 4:33)
@Giacomo77: Of course I was just kidding. In fact you have surprised me in a very positive way. There are many misaligned alu frames on the market from different manufacturers and they make warranty replacements at best. But you showed us a transparent process. I know that those videos are really marketing, but I think it is very good, much better than e.g. pissing on carbon and arguing with Steve

Giacomo77 (Jan 16, 2019 at 4:51)
@lkubica: To be fair we have been discussing to hold the video back, but in the end the whole idea was to show and document the process as it happend. It´s not traditional marketing like any other company would do but it´s 2019 and people know that mistakes happen and it´s just about how you solve them. Have a good one and thanks for your comment.

carbonbootprint (Jan 15, 2019 at 16:06)
The frame looks amazing. Best looking frame in a while in my opinion. Cool that you guys are realizing your passion and I hope it works out!

cheetamike (Jan 15, 2019 at 12:05)
Wonder what the front sprocket size is limited too. That chain stay is high and cogging out with a small front sprocket could cause chain drag on the stay.