Introducing the Calibre Triple B Pro 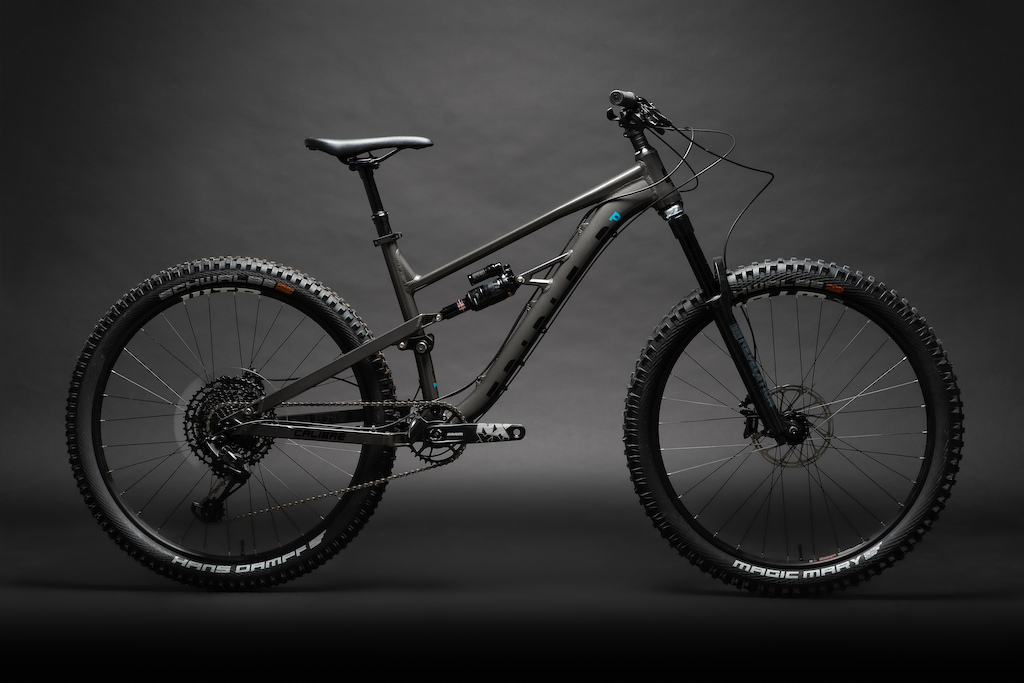 A few years ago now we developed the Bossnut which quickly became synonymous with the Calibre brand. Turn the clock forward a few years and we’re onto our 4th iteration of the bike and with it, have collected a whole host of accolades from multiple Singletrack best bike awards to MBR Editors choice awards and a good few 5-star reviews along the way.

We knew we had a good platform in the Bossnut frame and in 2018 we upgraded the components to produce the Triple B, a bike which included most of the upgrades Bossnut owners were making to their new steeds, with a dropper post and longer travel forks. The Triple B was a success in its own right and has a core group of dedicated riders with their own riders group on Facebook.

Fast forward again and we’re in 2020, what a year… bike demand has gone through the roof, the whole cycle industry pushed to its limits but luckily for us this bike has been in development for a couple of years, our orders were in early and we’re ready to share it with you now, introducing the Calibre Triple B Pro, our premium, short travel trail bike. 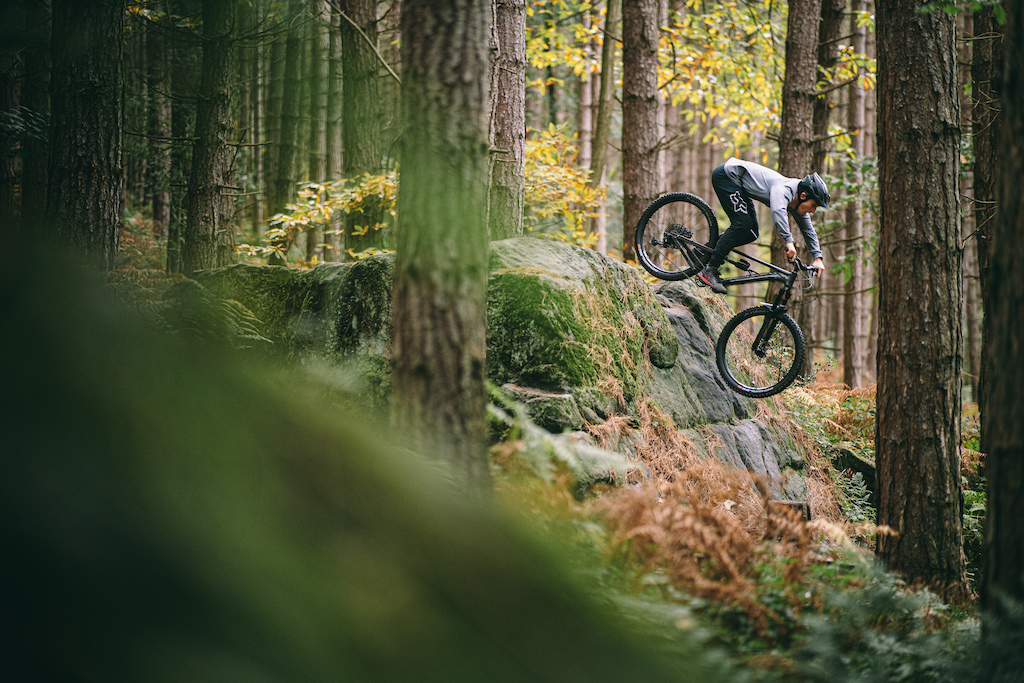 Based on our the proven chassis, we’ve upgraded everything else to push this bikes spec to the max. The combination of Rockshox’s Revelation forks and Monarch Plus DebonAir RC3 shock provide a serious suspension upgrade, it has to be ridden to be believed but the difference is night and day. The bike runs silently, handles better over the rough stuff and takes bigger impacts with ease, as well as coming with a lockout on the shock to make the climbs easier. The new Revelation fork takes much of its technology from its bigger brother, the Pike, with 35mm stanchions and a similar chassis, it’s really grown up over the years and is the perfect addition to the new bike. For a bike capable of performing this well, we’ve also upgraded the rubber and spec’d aggressive Schwalbe tyres, 2.6” Magic Mary front and 2.35” Hans Dampf rear, both with Schwalbe’s Addix Soft compound. These tyres are some of the best on the market and we see lots of riders on the Bossnut riders group on Facebook making the upgrade, and for good reason. SRAM’s GX rear mech gives more precise shifting than our base spec Triple B and the NX chainset comes with their DUB system. A 150mm KS dropper and Spank finishing kit round off our highest spec trail bike to date and we can’t wait to see where you folks end up on it.

NoahColorado (Nov 12, 2020 at 8:42)
I think it's a global phenomenon, because the same is true at North American bike parks. Kids with clapped out bikes -- with an inch of play in every direction and more oil on the outside of their forks and shocks than inside -- ripping past and hitting lines you've never even noticed. It's super annoying.

Kramz (Nov 13, 2020 at 0:10)
Hahahaha, reminds me of the ROAD BICYCLIST!!!!!!!!!!!!, couples, when I'd ride my commuter bike. They'd pass you, as if their life depended on it. I'd be like, "nah they're like 40, and I'm a super fit athaleet, in his beer prime, capable of anything". Good thing I've been bicycling for 29 years, at the end of the day, really worth it. Exercised every day for eleven years baby, "it's not a locomotive, it's a inoperative steam tractor, on drugs".

ou812ic (Nov 13, 2020 at 7:16)
@NoahColorado: That's everything, man. As sports grow and more and more young people get into them, especially following in their parents footsteps to a degree, the risk tolerance and natural ability via exposure and repetition is unbelievable. Hook em while they're young.

transam711 (Nov 12, 2020 at 10:37)
between the errant cables, stack of spacers under the stem, and the dork disc on the back, it's like they were trying to make the bike look as bad as possible for that pic

RideCalibre (Nov 13, 2020 at 0:52)
We were under time pressure to get this bike shot in the studio ASAP before sending it out to film the launch video and had to set the bike up for bar spins so left the cables long intentionally. Having said that, the dork disc is unforgivable and we've sentenced ourselves to 40 lashes as punishment.

DarkDiggler (Nov 12, 2020 at 13:57)
Owned by JD Sports, have a read up on what they did to the suppliers and landlords of Go Outdoors when they bought their OWN company out of administration using a shiny new limited company they had just set up and wiped their snotty corporate noses of all the debt and tax and made many people jobless....there are many names for companies like this but nice isn’t one of them.

GazeeMW (Nov 12, 2020 at 7:10)
Great bike at the time of release, but looking dated now. Guess with the designer, Mike Sanderson leaving for On-One, then Go Outdoors financial issues, the progression of the bike has stalled. Pity, as it’s a decent ‘proper’ bike on a budget. Can’t help but feel this bike helped push some of the better lower cost bikes from other manufacturers though, so kudos to Calibre for that.

Braindrain (Nov 13, 2020 at 2:18)
I can't imagine there will be any more significant bike releases coming from Calibre in the future, and two years spent on upgrading parts on an old frame is a testament to this. I see this as the end of the road for the Bossnut. On-One have form for affordable relevant bikes, MS has form with the Bossnut and Sentinal. It will be interesting to see what comes out of On-One in the next year or so.

RideCalibre (Nov 13, 2020 at 0:52)
We were under time pressure to get this bike shot in the studio ASAP before sending it out to film the launch video and had to set the bike up for bar spins so left the cables long intentionally. Having said that, the dork disc is unforgivable and we've sentenced ourselves to 40 lashes as punishment.

Marcencinitas (Nov 12, 2020 at 7:18)
The article should probably share the bike's front and rear travel.

cxfahrer (Nov 12, 2020 at 5:15)
You can not seriously compare it with a Capra with these numbers. And even a Capra ist a bit dated. Look at the seattube angle and length!!!

bikemongmatt (Nov 13, 2020 at 10:40)
me and my friend are both about 15 and he used to have a Bossnut and i had a Voodoo Canzo (the silver one not the black one) and they both had mismatched parts and and unforgivable amounts of play that could make you feel like you were doing a jump when in reality you were firmly on the ground and we had Halfords tires but, we learned so much on those bikes and made some awesome memories, those bikes are so playful and fun but they do start to limit you unfortunately. now we both have stealth black enduro rigs (mines a giant reign, his is a cube stereo in case you were wondering) and they kick ass they really do. there's nothing i wouldn't ride down on them (if i had the balls anyway) but i miss my Canzo, and its hard to explain why. i had less grip from the skinny rims, plastic tires and and terribly unmatched suspension but it was the plastic tires that meant i could drift round almost any corner i wished. it was the skinny wheels that meant that every off-camber section was a gamble with your life and it was the over damped fork and under damped shock that meant everything on the trail was a kicker. I really do appreciate my fancy giant because it cost Santa a lot of money and it is so much easier to live with and if i said i don't still scare myself on it Id be a liar but i still miss my crap bike maybe I need to take off my rose-tinted glasses and maybe its just the glow in the dark grips that i mourn the loss off but I miss my bike. I don't know why I'm writing this really, but i miss my old bike, and it means that i having quite a complex question on my mind. Is better really better?

number44 (Nov 12, 2020 at 9:02)
I see that every time I glance at the headline. Then I think of the Triple Bro P at college parties when we all needed to take a leak at once, so everybody crowded around the can. Thems was the days....

lightone (Nov 12, 2020 at 4:08)
Relatively longer seat tube is clever at this price point, because someone with a limited budget does note want to spend to much for +170 mm dropper.

jesse-effing-edwards (Nov 12, 2020 at 6:21)
But when they are super cheap in a couple of years you can't take advantage with this frame.

lightone (Nov 12, 2020 at 9:51)
@toad321:
The problem is a reliability of these droppers. Even top end manufacturers struggle with that. Steep seat tube angle creates a bit lower forces on bushings in seated positon, but it will get a lot of play too quickly.

hamncheez (Nov 12, 2020 at 10:35)
@lightone: BrandX is manufactured by Trans X, which manufactures almost all of the OEM dropper posts on the market, and most of the aftermarket dropper posts as well.

Jshemuel (Nov 12, 2020 at 9:40)
Overall pretty ugly, to be honest, especially with the taper at the top and bottom of the head tube and the stack of headset spacers. And why is the front brake hose so damn long? And why run cables both on top of and underneath the down tube??

hamncheez (Nov 12, 2020 at 10:38)
I think its beautiful. The gently hydroformed down tube isn't too angular or too curvy, but understated. The ovalized top tube has a very thin profile, reminiscent of steel tubing. I've always been a fan of horizontally mounted shocks for their aesthetic, and in this case the shock is parallel with the top tube. Very nice. The rear of the bike has square tubing, which I'm less a fan of (but is probably structurally more appropriate for chainstays and seat stays) and doesn't flow well from the front of the bike. Overall, 8/10 on the looks for me.

SyKon (Nov 12, 2020 at 7:27)
was at he trails yesterday, when I came by 2 blokes trying to figure some sort of mechanical by he side... on what from a distance even looked like a very expensive fully... sure enough the chain was jumping on the biggest sprocket of the guy's Canyon... and the only thing that had saved his pretty expensive wheel and ride assuring his way back home was the 'dork protector'... ???? Do I run one on my bikes...??? Hell no! Do I think they are not dorky as F@*k... Daah! Is there some reasoning behind their inception and installment en masse especially in times of old, and nowadays more commonly at entry level models, besides poor hanger/rear mech/chainstay alignment and even poorer gear indexing...? Leave that to the people to decide... Regardless, yesterday proved that they might have some limited usage too...

Was just looking at my old MBA (mountain bike action for the uninitiated) from 1997 and a review of the 70° HTA Cannondale DH bike and thought: "we'll always have something to complain about."

MuddyFoxCourierComp (Nov 13, 2020 at 17:20)
@ssteve: I get what you mean, but this is in relation to its contemporaries. That Cannondale was probably rated highly versus what was on sale at the time I bet.
Below threshold threads are hidden

bman33 (Nov 12, 2020 at 8:37)
Bikes just didn't even work in 2013. Literally even pros fell over every 5 feet and couldn't pedal on flat, couldn't jump them, couldn't even them hang them in a garage without them falling off a hook or breaking something. EVERYTHNG must be thrown in the trash if it isn't Geometron numbers! Rabble rabble rabble! Break out the torches!!!