For the final event of the 2014 California Enduro Series, the tour headed to the Soquel Demonstration State Forest for the Bell Santa Cruz Super Enduro on Saturday, October 11. ‘Demo’ as it’s colloquially called is a super popular trail network—so much so that the event's 215 spots sold out in less than 10 minutes online, leaving a wait list about as long as the course. Great weather and a perfect venue at Camp Loma, with meals provided by title sponsor Bell, made for the perfect end to an amazing season of racing a great variety of trails and spending time with friends.

With the Bell SCSE being the series finals, racers were not only sending it in hopes of getting on the podium; they were also trying to get those valuable series points in hopes of moving up in the series overall. With lots of fast CES racers coming from the Santa Cruz area, non-locals knew they had their work ahead of them.

Times at the sharp end of the race were unbelievably tight once again, as racers hung it all out in the steep, dry, loose conditions of the weekend. After a big day on the bike, the venue was hopping as the beers and the stories flowed. After a long season, the Bell SCSE was the perfect ending, and racers agreed that they can’t wait for the 2015 season to get started! 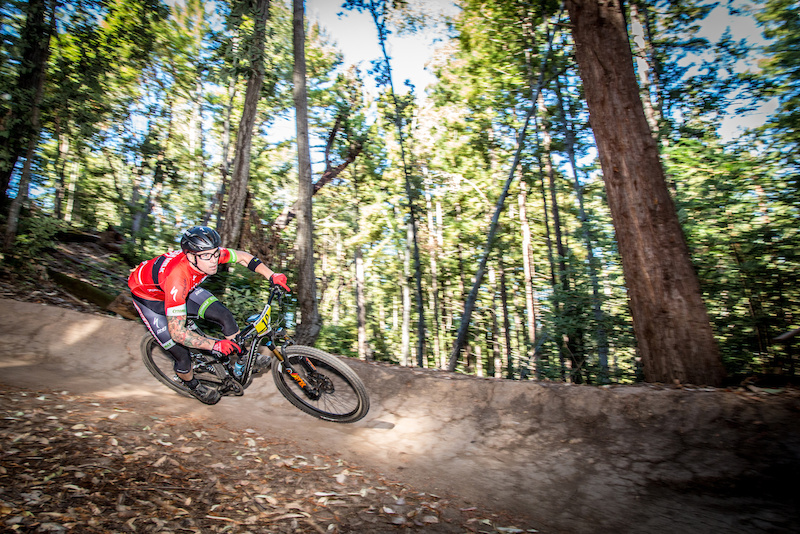 John Hauer (Muscle Milk / Specialized Bicycles) defended his title as Santa Cruz Super Enduro champ after a tight race in a stacked field. The day's top 5 was separated by just 22 seconds—with Jeff Kendall-Weed behind Hauer by a mere 3 seconds—making it an exciting day for the event’s top finishers. Hauer praised his fellow racers, saying “So much talent in this area, it makes it extremely fun to compete!” Photo by Called To Creation. 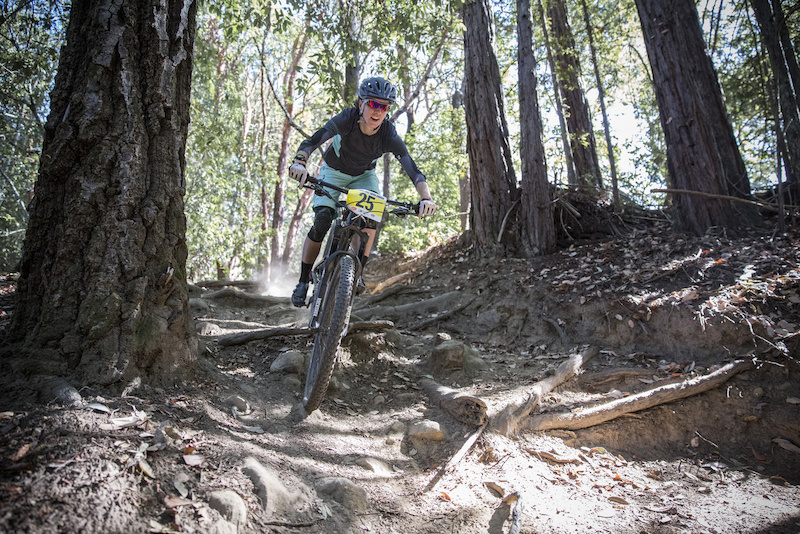 Olympian and 2014 World Championships bronze medalist Lea Davison (Specialized) took her strong riding all the way to a 1st place pro women finish. Davison enthused, “I like Enduro! I was so pumped to try my first one at the Santa Cruz Enduro and grab the win. [It was a] great weekend of racing in Demo Forest.” Her exceptional fitness paid off on Stage 3 with its lung busting climb out of a precarious rock garden halfway down the trail. Sawpit is Demo’s longest descent and kept racers on the gas from start to finish. Photo by Tyler Wilkinson-Ray. 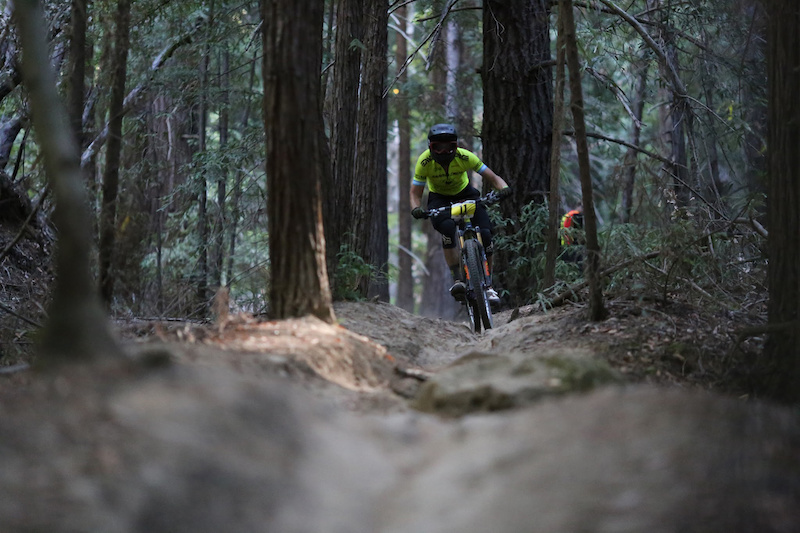 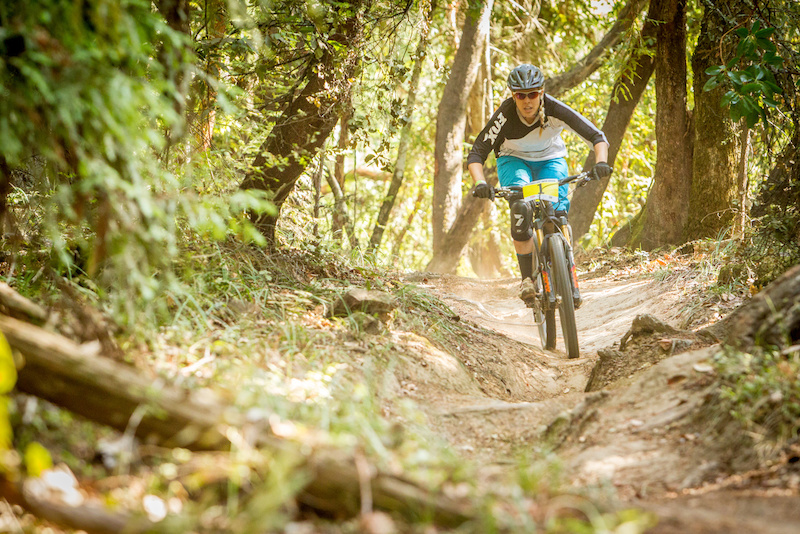 Lauren Gregg's (FOX) commitment to training and to the series put her in 1st place overall. Photo by Called To Creation. 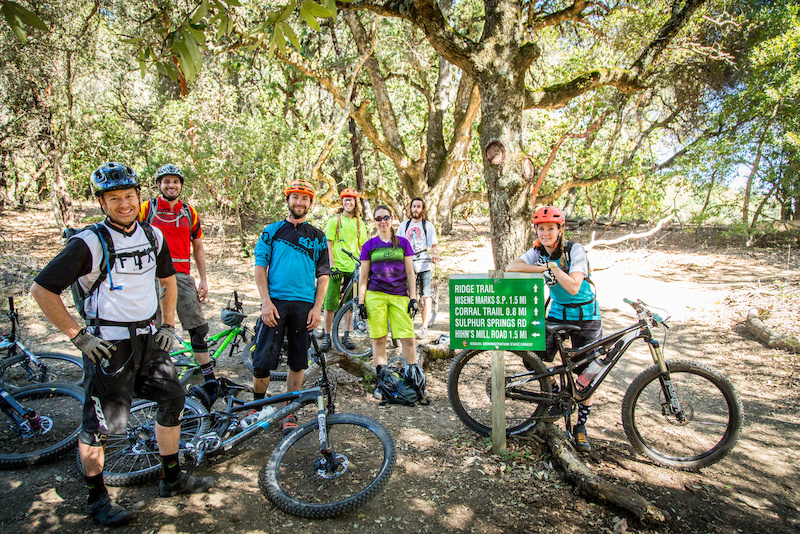 Practice time is always more fun with a good crew. Photo by Called To Creation. 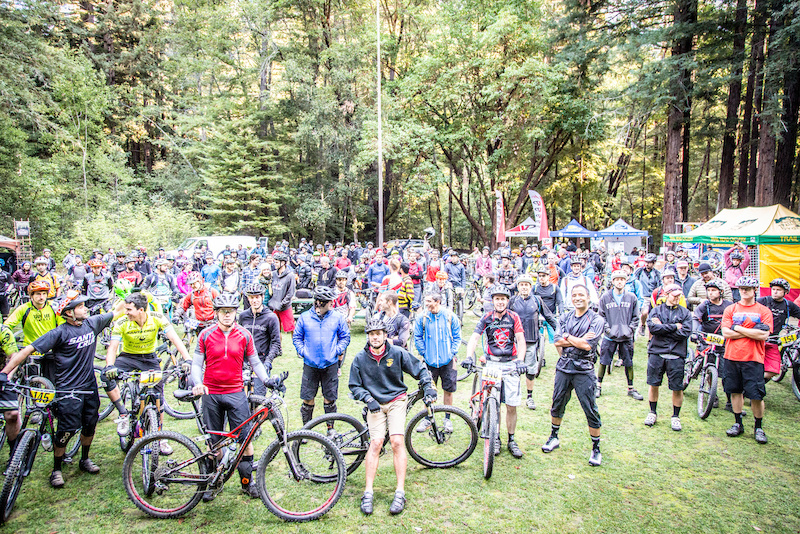 The obligatory race start photo. Over 200 racers ready to roll. Photo by Called To Creation. 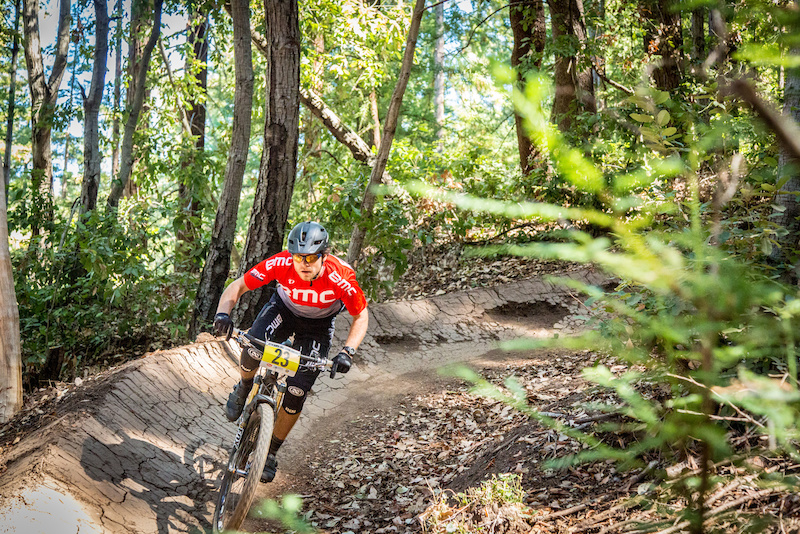 Aaron Bradford (BMC), fresh off a Euro adventure, came out to shred just up the hill from his home. Here Bradford takes on the Stage 4—new to the SCSE course—which consisted of the two completed sections of the flow trail being built by Mountain Bikers of Santa Cruz, the IMBA chapter that organized the race. A low average grade, smooth terrain and big berms and rollers set this trail apart from all others at Demo, and favored those skilled at pumping turns and grade reversals. Photo by Called To Creation. 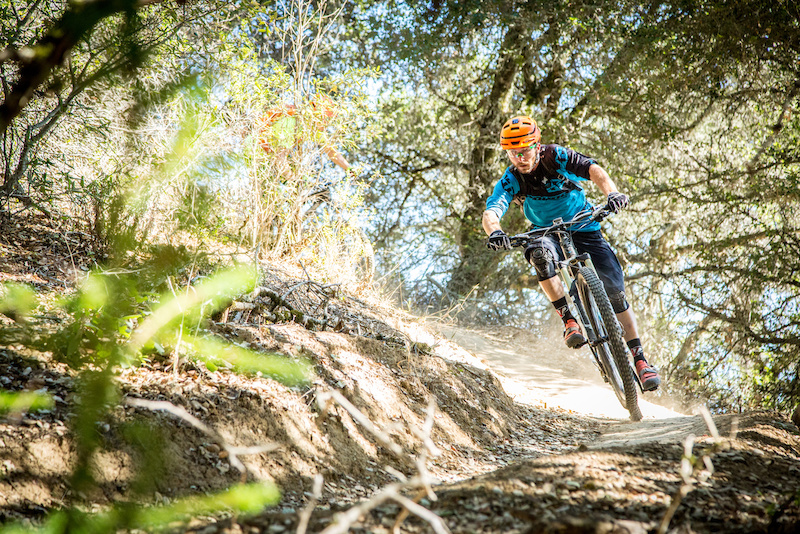 Casey Coffman (Felt/VP/Kenda/SR Suntour) getting after it in the dry conditions. Photo by Called To Creation. 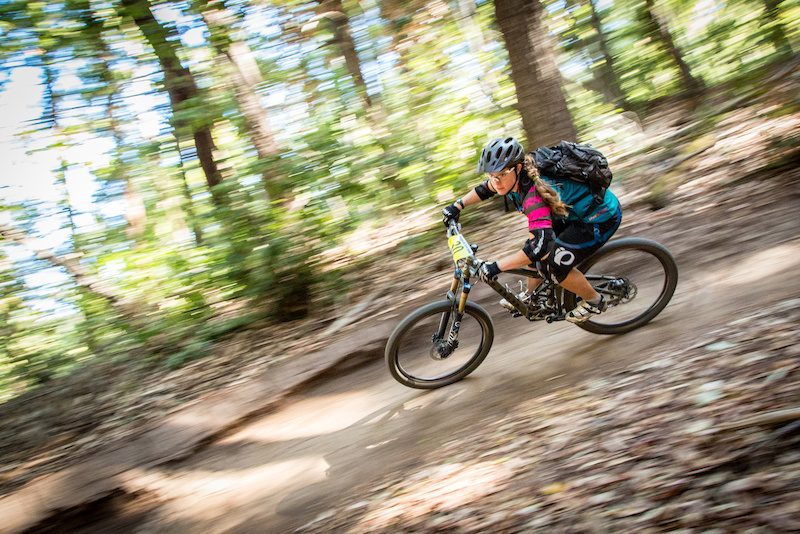 South Lake Tahoe’s Monika Renk stepped it up to the pro class for the finals. Photo by Called To Creation. 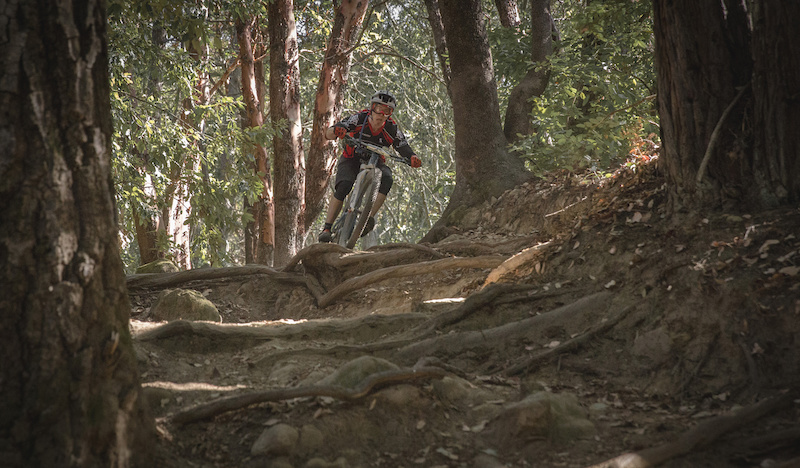 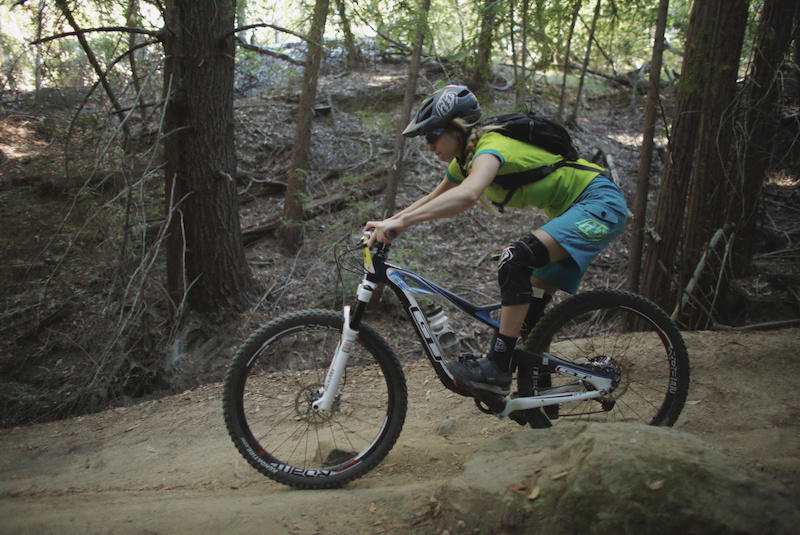 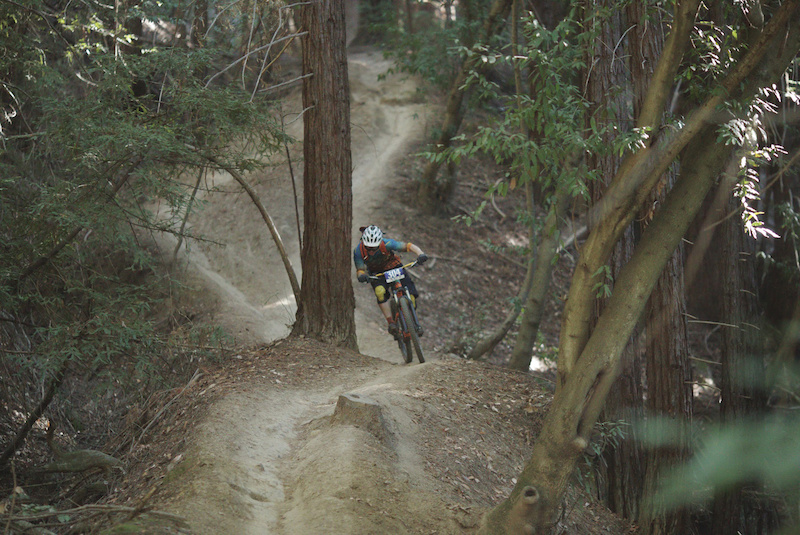 As demonstrated by Liam Ruff, hugging tight against the trees was the straightest, fastest way down stage 2, which took riders down Demo’s renown Braille trail which features tight turns, steeps, multiple line options and plenty of tech-gnar. Riders familiar with this stage had an edge; knowing your line and catching the flow ensured a Jedi descent. Photo by Bogdan Marian. 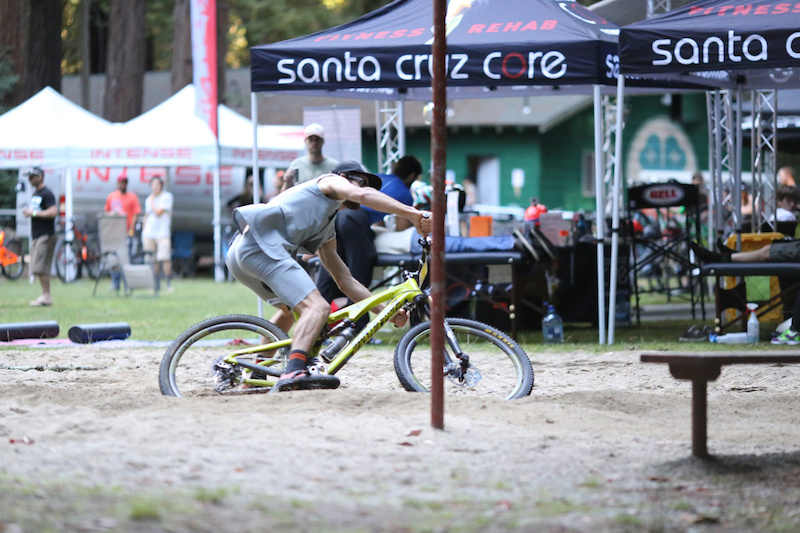 After a five mile climb back to the event’s base camp, racers celebrated a great day—and season—on the bike with post-race revelry that included beer, food, live music, a sponsor expo, and post-podium outdoor movie. Scott Chapin (Santa Cruz Bicycles), dressed to impress, railing a sand rut on the volleyball court. Photos by Bogdan Marian. 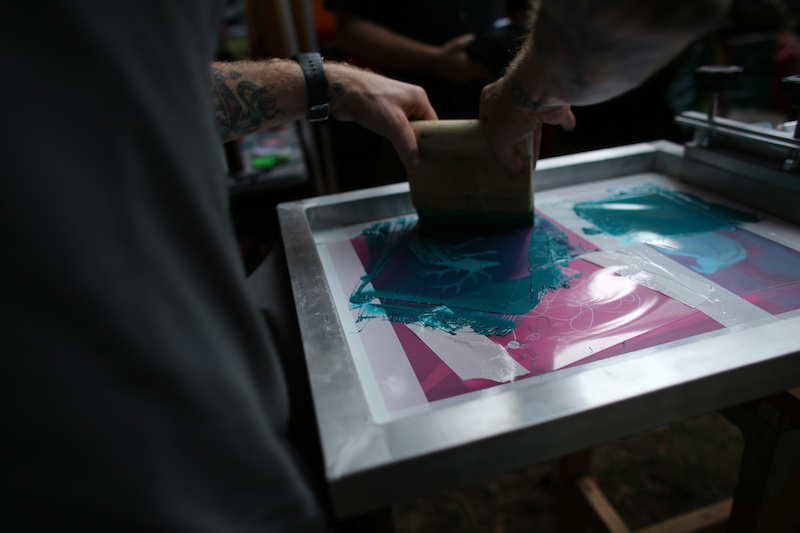 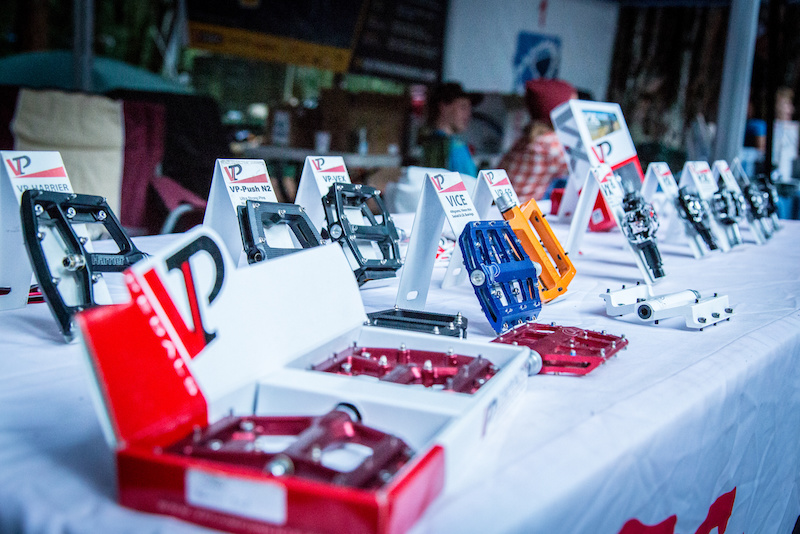 VP Components is the founding sponsor of the California Enduro Series. Great pedals! Photo by Called To Creation. 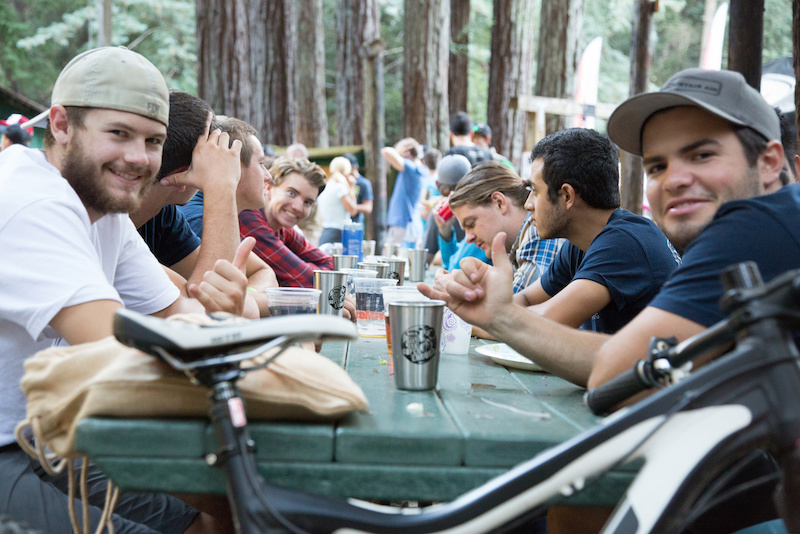 Dinner and beers were provided post-race courtesy Bell and Lagunitas. Hang tens, thumbs up and high fives were in great abundance at the end of an epic day. Photo by Called To Creation. 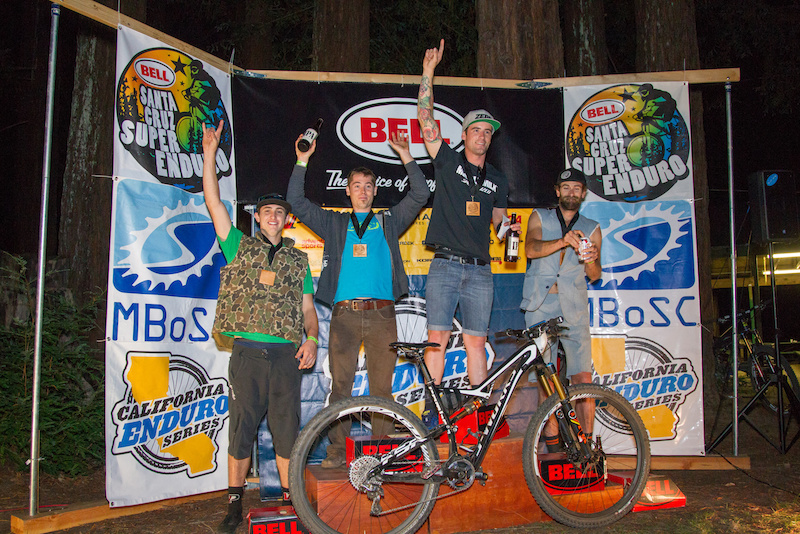 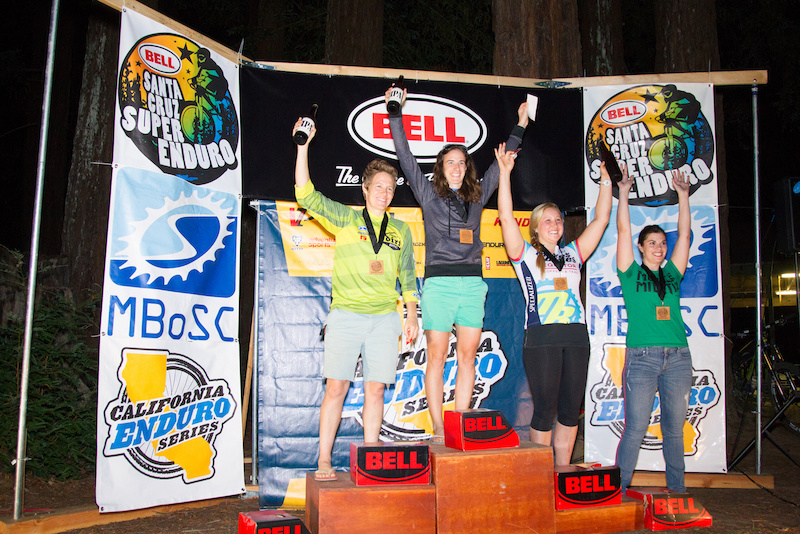 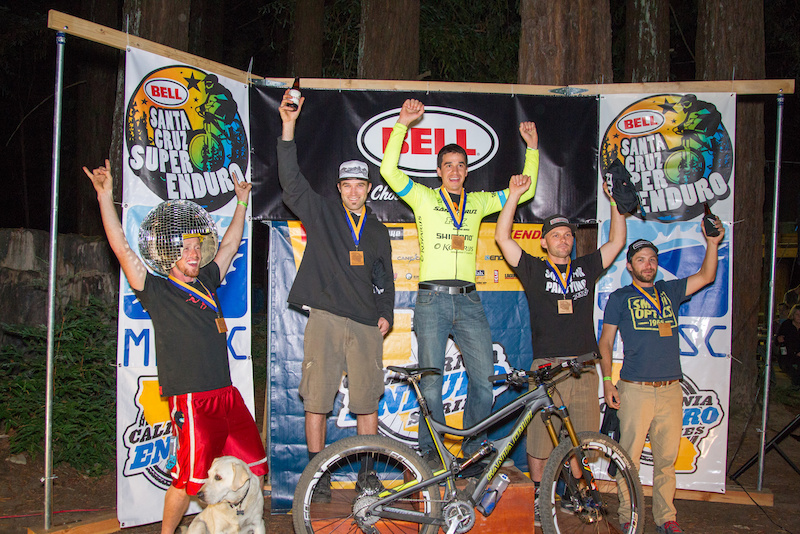 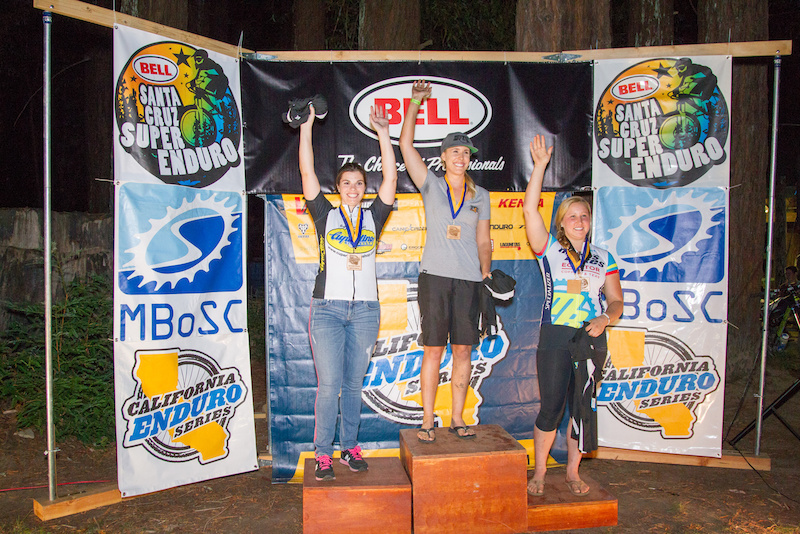 codypup (Oct 19, 2014 at 11:02)
I wish there was ab actual race report telling us how the event went down by stage and even brief interviews with riders. instead of a press release I already read on Vital. The definition of mailing it in.

JohnMichaelHauer (Oct 19, 2014 at 22:22)
Demo is an amazing place to ride and makes for a great event. This video however... Doesn't do justice to how well the event was organized by the promoters, how tight the racing was, or how rad the terrain is.

And was my check missing a zero or two on it? I think there were 40+ seconds of sponsor logos! =P Kidding of course.

Anyways, had a blast duking it out with Jeff, Scott, Marco and Aaron. Good fun for sure.

shred4days (Oct 19, 2014 at 21:42)
Just rode there today and it is by far the best all round riding I have done in a long time. Rough steep recents and a badass flow trail. Make the trip when you have a free day. Also it has great. Views of SC

twozerosix (Oct 20, 2014 at 11:01)
Back when I lived in SC that whole forest (Nisene Marks) was off limits to riders (or so I thought). I did poach it once or twice but just mainly on the fire roads. I guess local organizers or ride advocacy groups got more trails opened...? Looks nice and fast.

I've never understood why, in a sport where you're bombing downhill at 20mph+, people want to wear a parachute on their torso. It's a race, not a fashion contest, ladies and gentlemen.

Atherton wasn't happy that Moseley used a skinsuit, which being much more aerodynamic than loose clothing, would have given her an advantage.

"Fair enough to Tracy if she wants to do that to win, but for the sport and the longevity of the sport, to wear cool race kit and to make an image for yourself is more important than the odd win here and there," said Atherton.

I'm sorry, I thought it was a RACE, not a f*cking fashion contest. I'm guessing there was some lobbying by the TLDs, etc. of the mountain bike clothing industry that brought that rule change about, back in 2008. And, of note, Enduro is not, has not, and probably never will be governed by the UCI. The EWS, for example, has no interest in ever falling under UCI regulation.

Royal28 (Oct 19, 2014 at 18:36)
@LeDuke I would be pretty surprised if you can find factual proof of lobbying by equipment manufacturers influencing that desicion - one of the problem with skinsuits is that you saw riders at WCs and other skinsuit legal races start to wear less and less padding, even to the point where there were many wearing only a full face. Don't get me wrong; I race on the road and love skinsuits in their proper context, but there's more to think about in racing than aerodynamics.

LeDuke (Oct 19, 2014 at 19:52)
I agree. But I think Rachel Atherton's comment regarding someone winning the WC is either sour grapes or just showing a lack of depth of personality. "To wear cool race kit and to make an image for yourself is more important than the odd win here and there."

In any other sport in the world, you represent your sponsors best by winning races/games/championships, showing off that brand by standing on the top step of the podium afterwards, and being an OK human being on and off the field of competition. I can't fathom how one makes "an image for yourself" by losing a couple of seconds every time down the run and not winning.

Either way, I've seen that quote before, and it shows a significant difference between the level of professionalism in road and even cross, and what you see in many DH racers. There are guys going to the wind tunnel for CROSS these days, to try to get a few seconds here and there. Granted the payroll of many WorldTour teams is equal to that of every pro DH racer in the world combined, but still, really? I understand throwing huge whips when you're riding with your friends, or at Crankworx. I get it. But you're paid to make it down the mountain as fast as possible. Ride fast, take chances. Win, or don't.

JohnMichaelHauer (Oct 19, 2014 at 22:09)
Nice, I'm considered an XC racer now =] The handful of XC races I've done in my life quickly out weigh the hundreds of downhill events.

@LeDuke I dig your last comment. In any real sport or racing event the athletes and teams will do whatever it takes to get even the slightest advantage.

ryansimonovich (Oct 17, 2014 at 21:00)
Let's see what pink bikers have to say about the winner wearing spandex and an aero helmet! #bringonthehate #aeroiseverything

aerobic fitness, power output, mental toughness and bike skills and all that stuff maybe can get someone only like 5% faster.

eriksaun (Oct 19, 2014 at 9:52)
if you plan on winning, wear a long sleeve skinsuit... once Hauer figures that out i think he will be truly unstoppable... i am pretty sure he owns one for cross racing already...

jmrbauer (Oct 19, 2014 at 9:53)
dude psyched on men in spandex would put useless hashtags in his comment

preach (Oct 19, 2014 at 13:47)
I didn't make it 90 seconds into it...the dudes barely making it over the roots about to be shaken to bits is just too hard to watch.
Below threshold threads are hidden

mindbullet (Oct 20, 2014 at 6:16)
Used to live up there. Miss Demo so much! I rode Braille when it was illegal and hidden back in 2000. Those trails in the vid look so mellow compared to what I remember.
Post a Comment