New trails, a double World Cup and a successful season

It all began 20 years ago with one lift, two shapers, two trails and a good dose of motivation – Austria's first bike park opened in 2001 in Saalfelden Leogang. Although initially only very few outside the region even knew what a bike park was and what or whom it actually was good for, people in Saalfelden Leogang always believed in their vision of creating an Eldorado for mountain bike riders. Within a very short time, the success proved them right and even after 20 years the Epic Bikepark Leogang continues this story. For its big birthday this year, the bike park not only celebrated with new routes, hosting its first double Mountain Bike World Cup or the BIKE Festival Saalfelden Leogang, but above all with a big smile on the faces of the thousands of visitors. 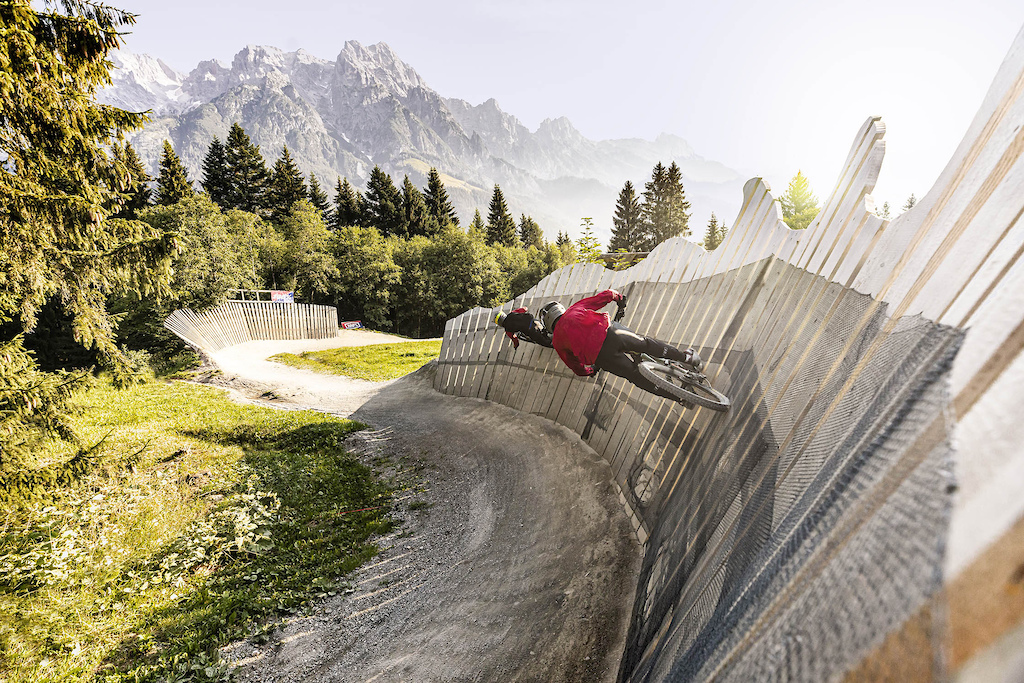 The story of the Epic Bikepark Leogang is above all a story of passion and belief in the future of mountain biking. Over 20 years ago, at the turn of the millennium, the Leoganger Bergbahnen – together with 33 shareholders – invested 450,000 euros in an idea unfamiliar and critically eyed by the general public: a bike park. But against all odds, the bet paid off and quickly turned into a complete success. Today, the Epic Bikepark Leogang is one of Europe’s largest bike parks, that has given stoke, flow and happiness to hundreds of thousands of mountain bike riders. With the organization of ten UCI Mountain Bike World Cups, two UCI Mountain Bike World Championships, a Trials World Championship and countless other large and small events, the Epic Bikepark Leogang gave the region of Saalfelden Leogang a worldwide reputation as a summer holiday destination and bike region. The above video gives a deeper insight into the history of the Epic Bikepark Leogang.


New trails are a complete success 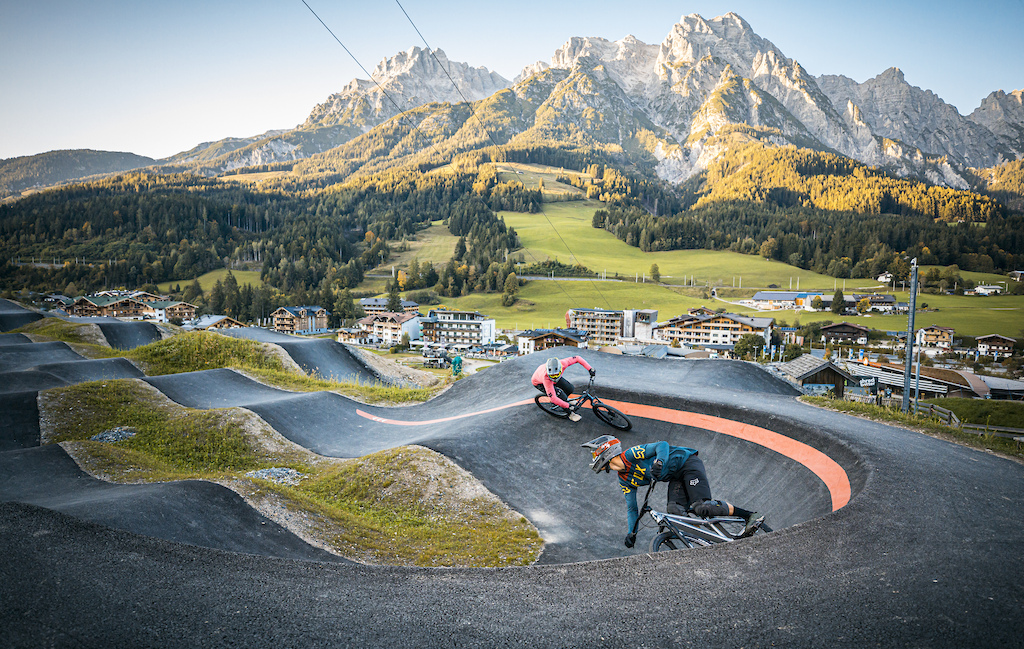 What started two trails, now has developed into 11 trails with a total length of over 30 kilometers, accompanied by more than 10,000 square meter practice area, the Riders Playground, a paved pump track of 5,000 square meter with a dirt jump area, the GoPro Bagjump and much more. It doesn’t stop there: over the past 20 years the region of Saalfelden Leogang region has also invested in the creation and expansion of a huge network of mountain bike trails surrounding the bike park.
This year’s new additions, already have received an overwhelmingly positive feedback, are “Vali's Hölle” and the “Knappentrail”. After the debut of Vali's Hölle as a new, extremely steep and technically demanding section of the downhill race track of the UCI Mountain Bike World Championship last year, it became part of the Epic Bikepark Leogang as official line in 2021. But watch out! Vali's Hölle is anything but a flowline and holds a great challenge even for experienced riders. Furthermore, the “HOT SHOTS fired by GoPro” has been extended right up to the mountain station of the Asitzbahn and now offers even more airtime and flow on big jumps and huge berms.
With the opening of the new Knappentrail the range of routes outside the bike park was expanded, too. The moderately difficult, natural trail starts right next to the Schwarzleo Trail and meanders with lots of flow, spiced up by some north shore elements back down to the valley. 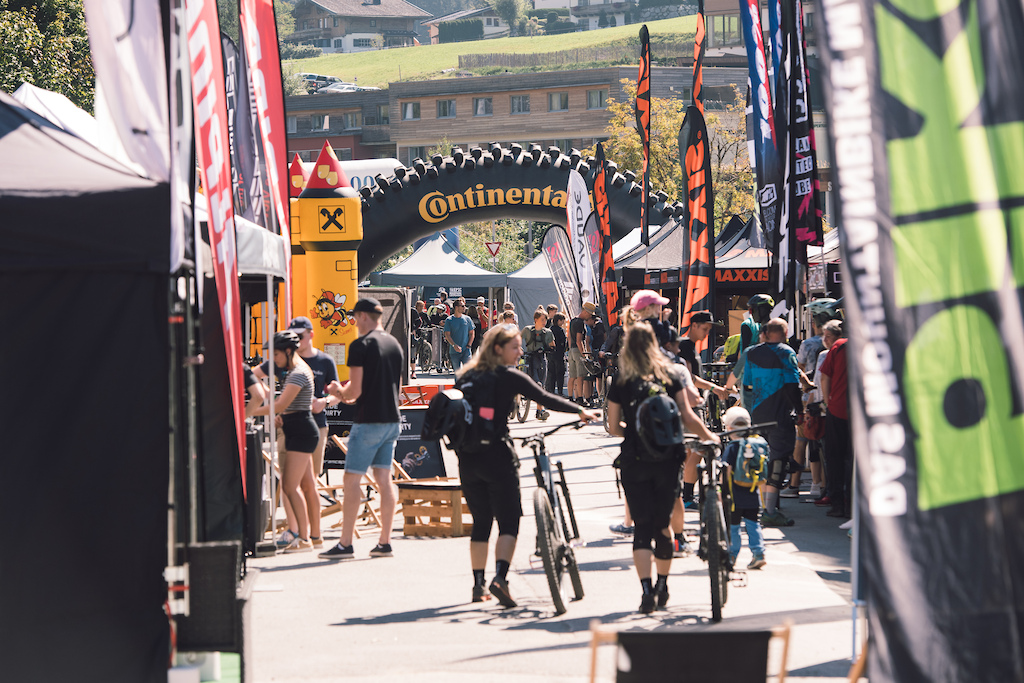 Despite difficult conditions, Saalfelden Leogang was able to successfully and, above all, safely host two event highlights this year. The first UCI Double World Cup in the Epic Bikepark Leogang at the beginning of June marked the season opening of the downhill circuit and ensured thrilling and spectacular downhill and cross-country races. Thanks to a sophisticated safety and hygiene concept, a limited number of spectators was allowed onsite to witness and celebrate the victories of Camille Balanche (SUI) and Troy Brosnan (AUS) in downhill as well as the double victories of Loana Lecomte (FRA) and Mathias Flückiger (SUI) in the cross-country and cross-country short track from right next to the track.
The second big event of the year, the BIKE Festival Saalfelden Leogang, was once again a great success. During the festival, thousands of visitors marveled at the latest bikes, components and products of 30 exhibitors and were able to test most of them directly on the lines and trails in and outside the bike park. In addition to live music and a variety of workshops with professionals and stars of the scene such as Jasper Jauch, the Pump Track World Championship Qualifier once again offered hot racing action for young and old.

For the coming season, the trail network in Saalfelden Leogang will be expanded by the addition of another natural trail, on which mountain bike guests in the region can collect depth meters outside the park, while other highlights are being planned for the expansion and the refinement of the Epic Bikepark Leogang itself.
The Epic Bikepark Leogang is also looking forward to hosting the UCI Mountain Bike World Cup again as part of the Out of Bounds Festival in Leogang. From 10-12 June 2022, all eyes will again be on the Pinzgau region, when the best of the best in downhill, cross-country and cross-country short track will compete against each other for important World Cup points. Of course, the BIKE Festival Saalfelden Leogang will return as well. As per tradition, it takes place in September (16.9.-18.9.).

More current news, dates and information about the tracks of the Epic Bikepark Leogang can be found at bikepark-leogang.com, instagram.com/BikeparkLeogang or facebook.com/BikeparkLeogang
For a "well-rounded bike vacation" there are special bike hotels in Saalfelden Leogang such as the Salzburgerhof, Bio Hotel Rupertus, Hotel Bacher, Hotel Riederalm, Hotel Ritzenhof, mama thresl, Hotel Krallerhof, Hotel Forsthofalm and Hotel Der Löwe, as well as competent bike stores such as Sport Mitterer or Sport Simon and the Bikepoint. To improve your own skills, for guided tours or for riding technique training, the Elements Outdoorsports bike school offers a wide range of services. A list of all bike-friendly accommodations in the Saalfelden Leogang region can be found here: saalfelden-leogang.com/de/region-erleben/biken/bikefreundliche-betriebe.
Austria's biggest bike region
The three resorts of Saalbach Hinterglemm, Saalfelden Leogang and Fieberbrunn joined forces as "The Skicircus" several winters ago. In 2020, they also came closer together for the summer, to offer mountain and gravel bikers almost unlimited possibilities on two-wheels. With over 80 kilometres of lines and trails, 9 lifts between 7 mountains and a joint bike pass offering almost unlimited gravel and asphalt options.

Photos by Klemens König and Delius-Klasing.

CSP (Nov 18, 2021 at 1:29)
Every time we visit Germany and Austria, it always includes a trip to Leogang. Not just for the park but more the scenery and vibe of the place, love that part of the world.

trashpander275 (Nov 18, 2021 at 14:50)
@Korbi777: I am sorry you have no trails, that sucks. After having many meetings with the management at my park, muppets is a very generous description.

pablo-b (Nov 18, 2021 at 9:43)
@trashpander275
Because in japan you probably need 234 permits to move one inch of dirt and probably also because the sport isnt so big over there? Idk