After moving back to the UK from Canada for the Winter, I got back in touch with my old buddy Ryan Nangle. We used to be team mates back in the day and we pumped out a lot of Pinkbike edits together. He’s a very accomplished rider, Filmer and builder so it was only right to have him on this project with me. I also got back in touch with Dec Lepage who has been taking photos with me since 2011, so again getting him on board was ideal. We had the old team back together! This project was more than just about filming, it was a reunion of old friends who love to ride, which made me a bit nostalgic. 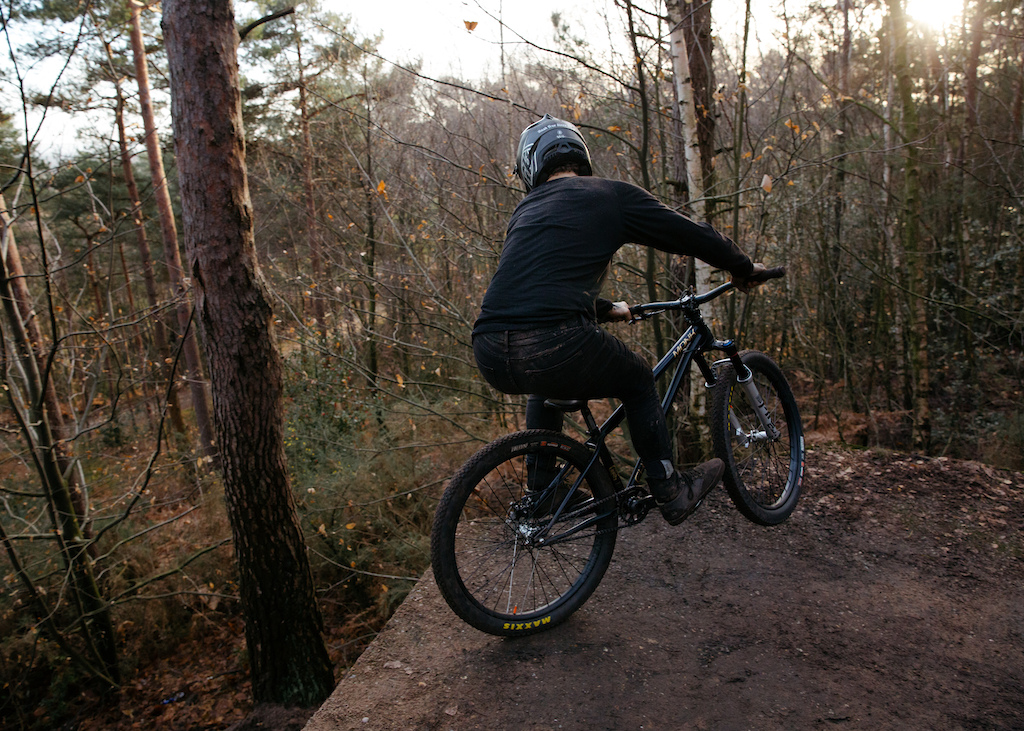 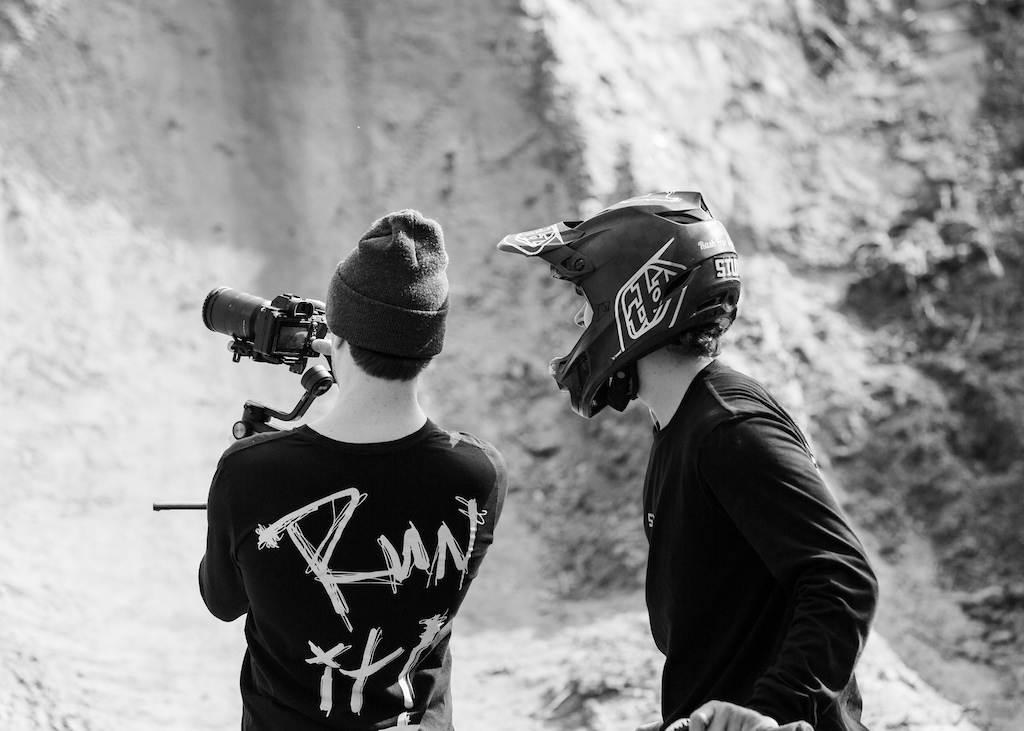 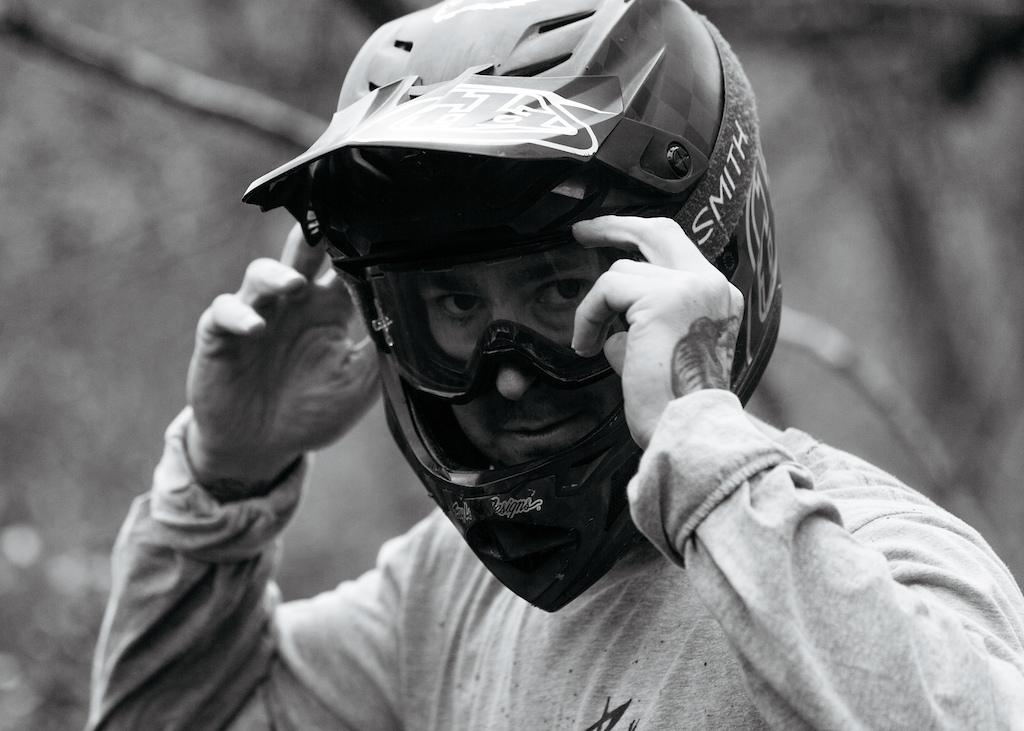 I had been very eager to film a project for a while now, so I thought while I’m back home this is my perfect opportunity to do so. After spending my years watching the best Canadian riders and then being able to live out there myself, gave me a lot of inspiration on my build. The two biggest inspirations are of course the legend Jordie Lunn (RIP) and Brandon Semenuk. I wanted to build something that took me out of my comfort zone and something that I wouldn’t normally ride, and I wanted to link these two tricks together in one line.

However, with lockdown in the UK and the necessity to work, it delayed our filming and building for a couple months. And, of course, the constant battle with the weather added to this delay. When I first brought up this idea to Ben Dobbin (Local Trail Boss) and Ryan, they were super keen to help me build, but were very sceptical about where I wanted to put my drop to step down feature. Due to a very limited space, it would only give me a bike length of flat bottom after the drop before hitting the step down. So yeah, there would be no room for error if I landed wrong and nowhere to run out. I was so set on linking these 2 tricks that I just wanted to get started with the build without thinking of the consequences.

The first spot we actually started filming at was the “Pure Darkness” step up! Shout out to Sam Reynolds for building this. It was the only decent sized jump around that I could try a few new combos on. But as you will see we filmed in the middle of winter so it was very wet and a bit sketchy. 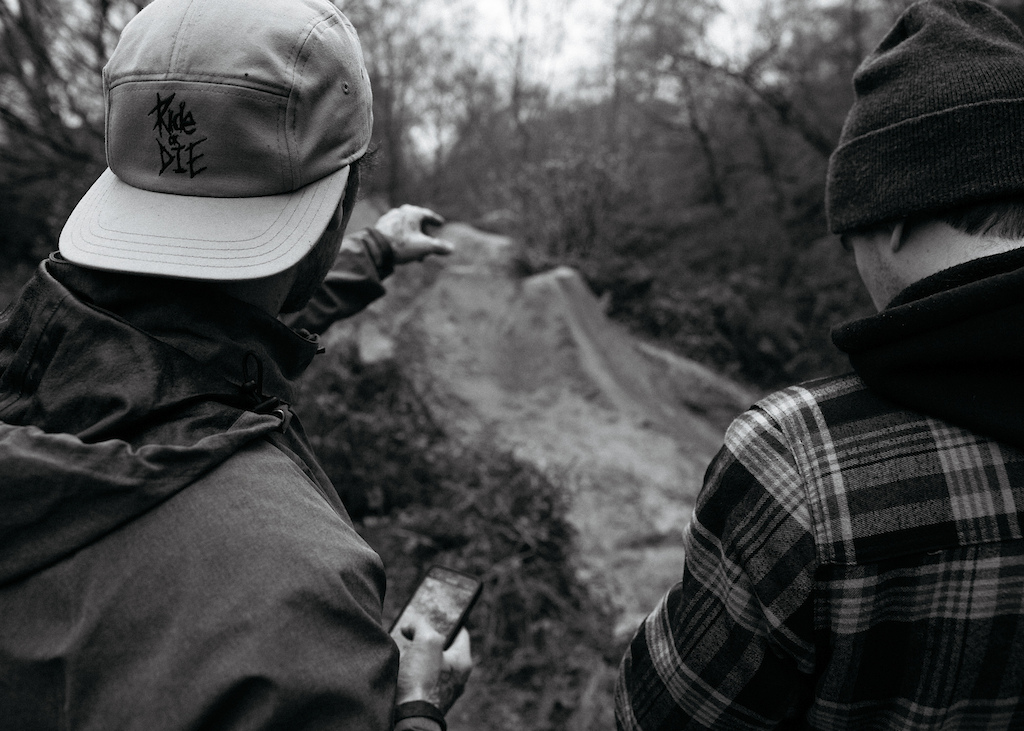 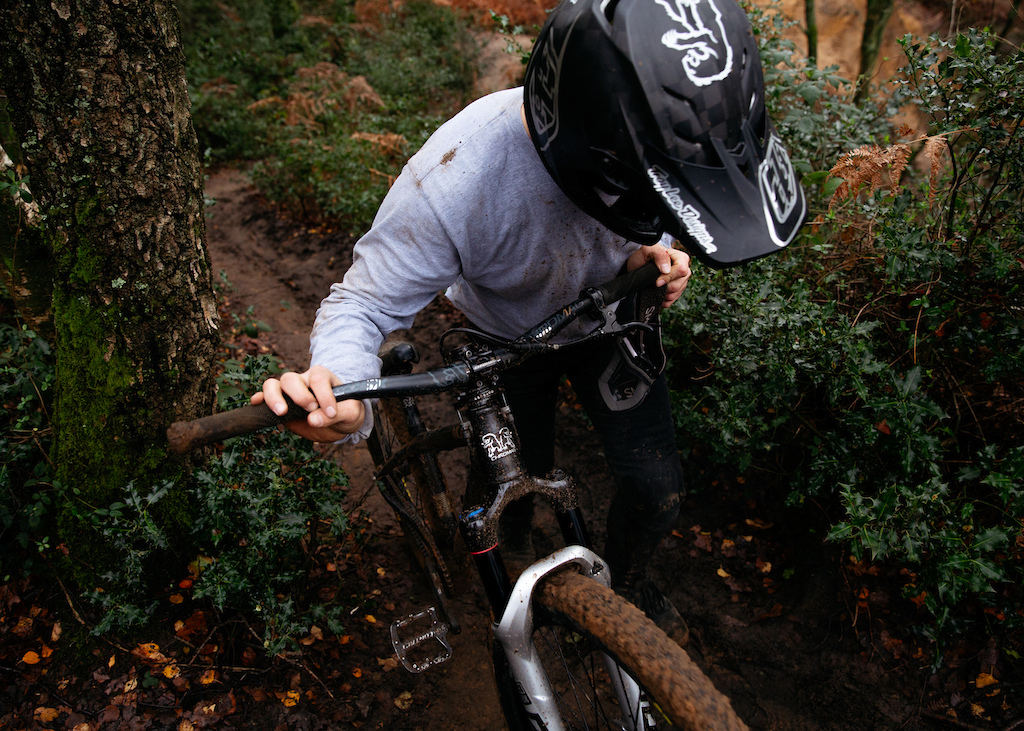 The second spot we filmed at was an old War bunker, that I had never seen or been to before. This bunker was a good opportunity to get some practice for the trick I wanted to try on my new build. Ryan said It was pretty small and we needed to rebuild the landing on the day of filming. When I got there it definitely wasn’t as small as Ryan had previously described and, of course, it was a little wet. I wanted to try the half cabb with my cassette which meant I would have to pedal backwards in the fakie then time my pop perfectly for the drop. The drop was not square but more hexagon so it wasn’t an easy one to judge the pop. There is a tree on one side of the landing and a big tree stump on the other, making it really gnarly (definitely hit that tree a couple of times). This would be my first ever cabb drop, so yeah I was pretty scared about having to learn it on the day, especially when I had nowhere to practice this beforehand. But after some really heavy slams, we got the trick and some really good clips! After filming this, a couple months went by where we were not able to film due to lockdown and weather, but we managed to get the build finished. Huge thanks to Ben and Ryan. 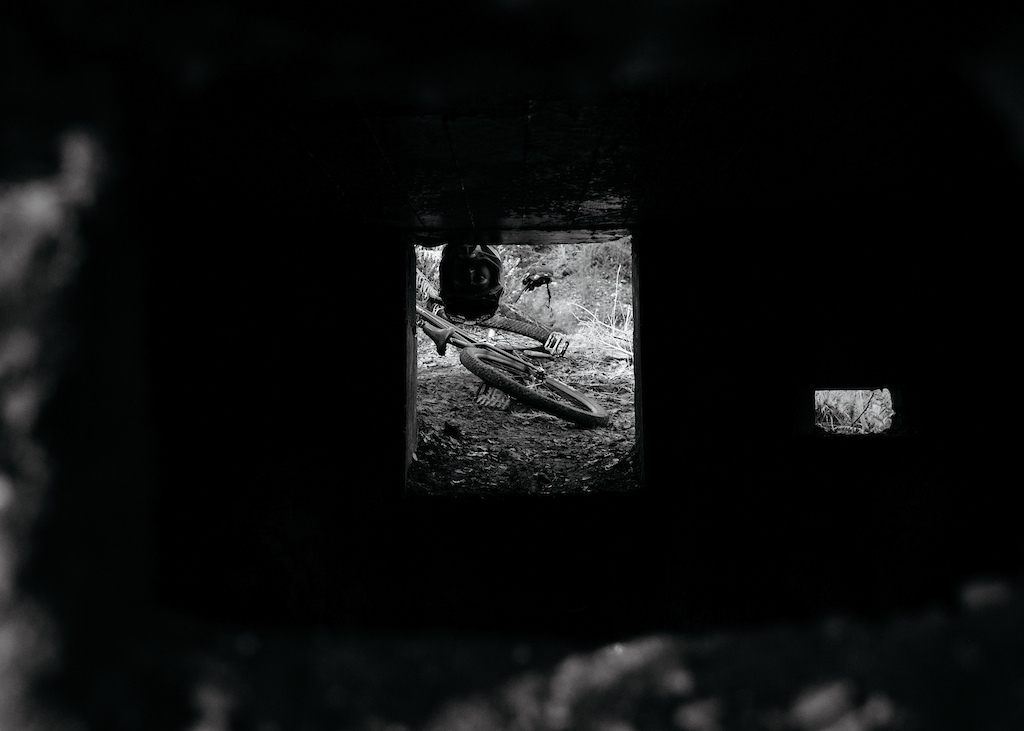 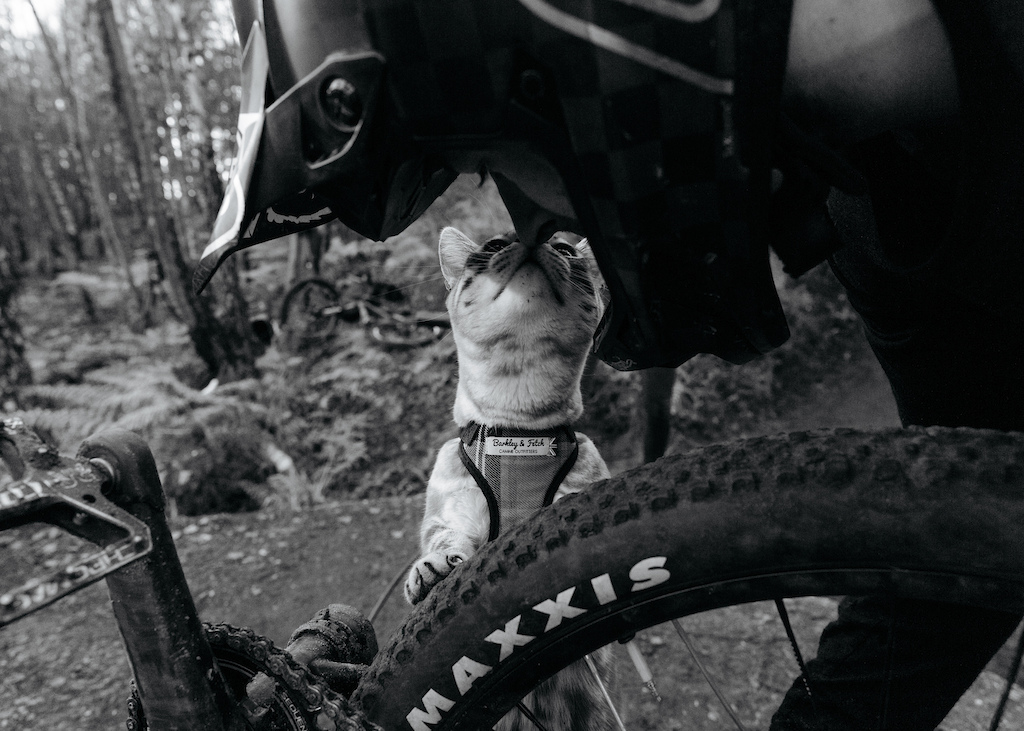 Test day.
A couple of days before filming I tested my new build. The landing for the drop was soft but I still well overshot the step down after it. And I knew that the more I rode it, the faster it would get, then the more I would have to brake for the step down. So that day I only hit it twice. I was so relieved it worked, but so nervous at the same time as I knew in my head what I wanted to try on this, and there would be no room for error, and a very high consequence if I were to go down.

Film day on the build.
So I got to the jumps 2 hours before anyone showed up getting some last minute practice with the freecoaster. Again, these 2 tricks I wanted to link, I had never done before on these types of features so I wanted to make sure I was dialled in. I didn’t want to practice on the line until the boys turned up, for obvious safety reasons, plus the line scared the hell out of me!

First hit of the day on the line, again, I overshot the step down landing massively, due to the landing of the drop becoming harder and faster. So this meant I had to give a decent pull on the brake before hitting the step down. I did like 3 or 4 more runs to learn the correct speed, then flipped it comfortably so I knew if the cork seven was on. It started to rain as I was walking back up, but I was already in the zone I just wanted to get it done! So this would be my first cork 7 on a step down, in the rain (I will post up the clip on my Instagram). It went super well first go, I pulled back a little more to make sure I got the rotation, so it was a little sketchy, but once I had done it, I knew I could do it again. It was still raining so I ran back up to the top with my tyres clogged with mud and did it again but way cleaner! At this point it started raining even harder, so it forced us to stop, as I was not prepared to try a half cabb in the rain on slick wood.

We waited for an hour or so before it cleared and became sunny. Game on. I mopped the drop, cleaned off my tyres and set up for the half cabb. It went perfectly first try but I missed the pop on the cork 7 and went down pretty hard. The half cabb was the scariest part, as I knew I had to be lined up perfectly to get the cork 7. After a couple more attempts, we achieved the goal! It felt like a massive weight was lifted off my shoulders after thinking about it so much for several months! We finally pulled it off! The stoke was high!!

I thought that would be the end of filming, but I had come this far and worked this hard on it that I wanted to at least try my dream trick. The sun was out a couple of days later, so we went back to the “Pure Darkness” step up. Again, I had never tried this trick before, not even to an air bag or mulch, but I had been wanting to try it for at least 3 years! It has only been recently that I have become comfortable with the cork 7 rotation, making it easier to visualize the trick I wanted. A classic bit of peer pressure and stoke from the boys, I was fired up. First attempt I washed out on the landing, so it meant this was happening. A few more crashes... and we got it! 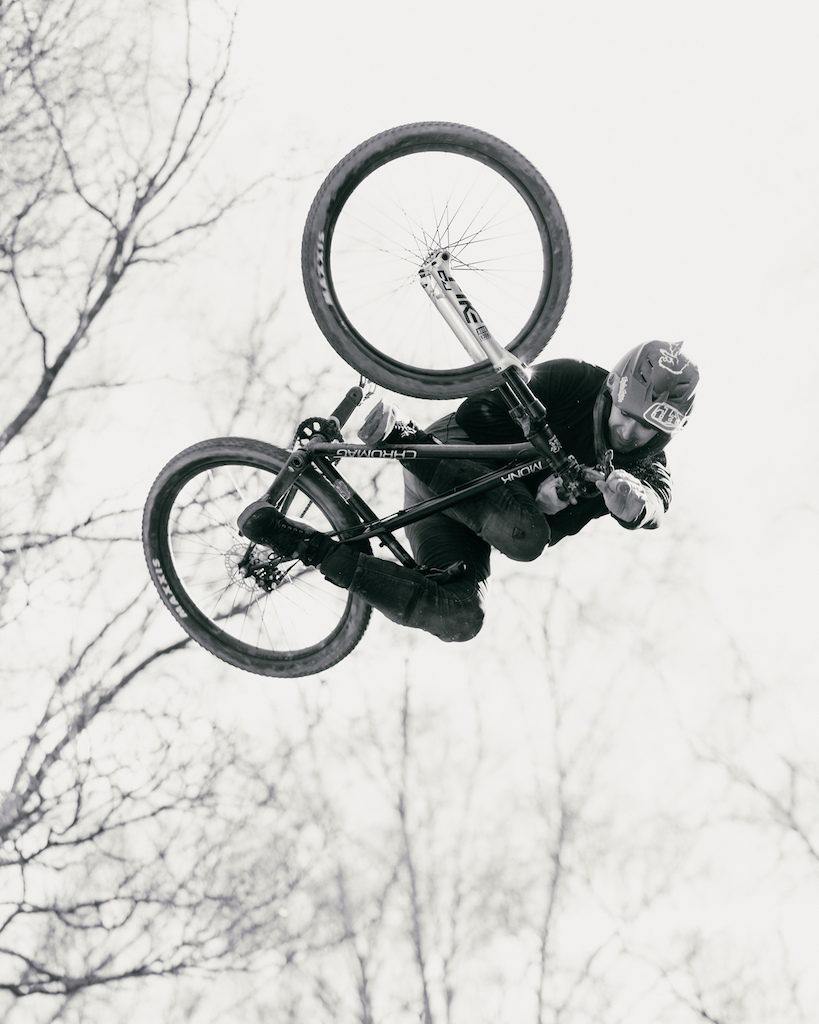 The level of high that I got from finishing the project and landing my dream trick was unreal. I felt so overwhelmed, and it was happiness in it’s purest form. 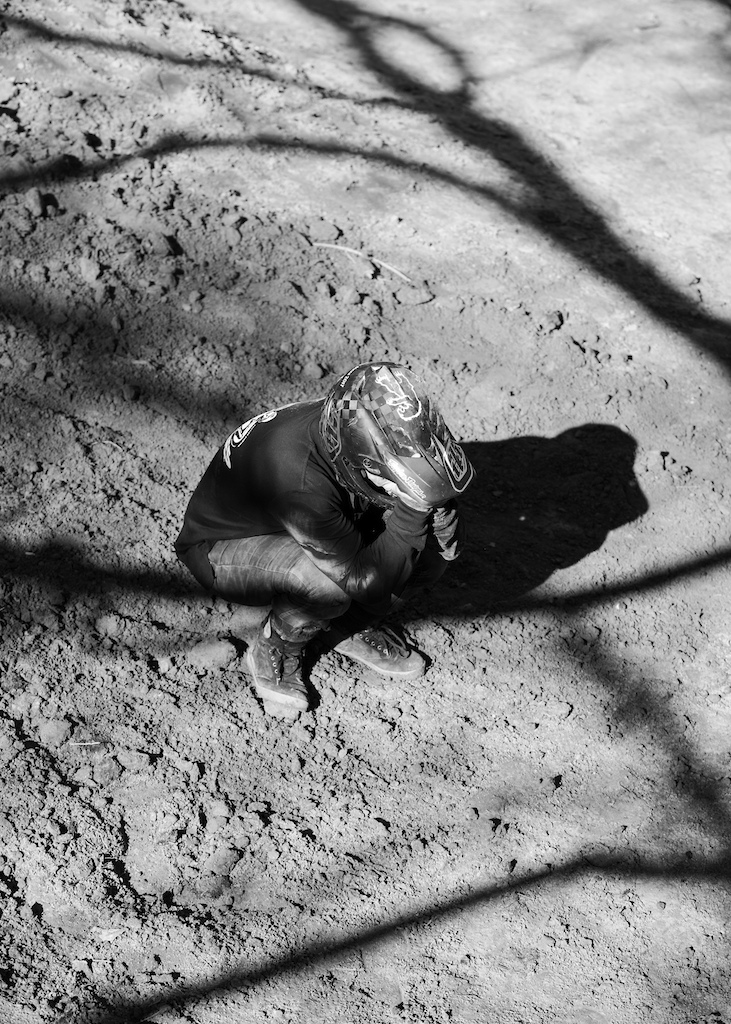 I’m stoked to share this with you guys and I’m keen to film more projects in the future. I hope you guys enjoy the watch and the little insight on my part.

A huge thank you to the sponsors for their support.

PeterT (Mar 28, 2021 at 18:55)
marcel is an absolute gent. stokes people up so much to ride and has zero ego or would never boast about how frickin good he is. makes it even better to know when sick riders are like that in my opinion, haha!

sals (Mar 28, 2021 at 14:53)
I hope you pop up to us this year! Be great to meet you and Alice Great to see the UK can provide enough after being in Canada living the dream

Where is it? It's the only reason I'm typing.

Burntfries36 (Mar 28, 2021 at 17:16)
Dude is a badass for sure! And its awesome to see the progression in the sport, but i feel like its still miles behind what those nutjob bmx riders are doin on 20 inchers.