Ethen Roberts comes from a family of characters who are pretty much good at anything they try. I was lucky enough to start meeting members of this family a few years ago when I was a part of the Nitro Circus Live tour. Ethen’s uncle, Gregg Godfrey was the spark that lit the whole Nitro Circus bomb back in the early 2000’s with his film “Travis and the Nitro Circus.” Being surrounded by crazies their whole life was the perfect marination process for Ethen and his brothers and cousins, and by the time Nitro Circus started doing Live shows, these kids were at a ripe age to start sending it on everything that rolls.

I’ve never met a group of such happy go-lucky kids who are so immune to fear or nervousness. The “Godfrey Clan” are machines who are talented and crazy enough to take on any task without batting an eye. I’ve watched them send ridiculous stunts on various rolling devices and often thought, “man, if one of these kids would actually “focus” some time on any one of these sports, they could be great!” I use the term “focus” loosely because I realize that with the amount of hereditary A.D.H.D flowing through their veins, its not likely for any one of these machines to choose just one rolling device. In the shows, they ride mountain bikes, tricycles, penny-farthings, ice-chests, pixie bikes, skateboards, etc. all on a “professional” level, but they also all love to ride mountain bikes in their free time.

A few months ago, you may have seen Ethen’s Youtube clip of a double backflip superman during a Nitro show. That video has over a million views and is titled “Is this the biggest bike trick of all time?” Watching that trick begs the thought, “imagine what this kid could pull off if he spent more time on his mountain bike.” After that video hit the web, Ethen started getting some support from FOX suspension and he was able to make a trip down to the mecca of Virgin Utah to ride his freeride bike and film some tricks. Here are some photos and a video from that trip. I happened to meet up with Ethen while he was in Virgin and we did a shuttle run on King Kong, one of Virgins sickest trails and Rampage-iest ridgelines. Ethen stomped the whole line without a tumble and I can’t wait to get the chance to ride with him again soon. 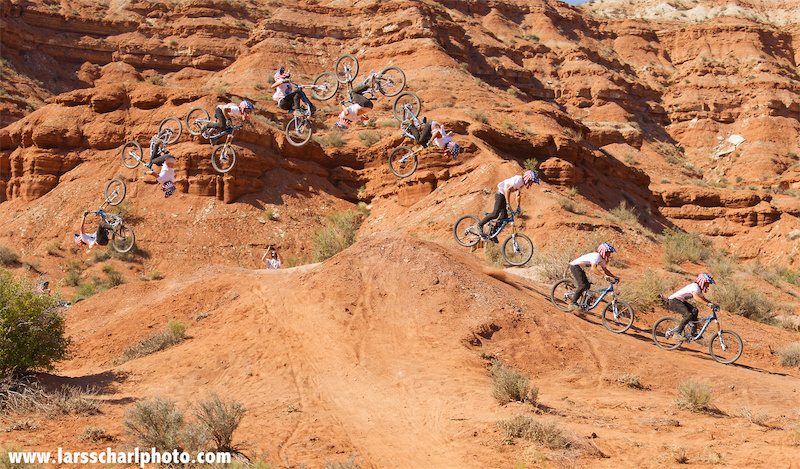 There’s no doubt that if Ethen and the rest of the “Godfrey Clan” continue to focus on mountain biking in their free time, we will all remain entertained by the footage! Sit back and enjoy some highflying desert trickery by this talented and crazy kid.

scott-townes (May 15, 2014 at 13:30)
Not to mention Ethen didn't grow up rippin mtb and it's not his current profession... dude has some serious natural abilities. That whole family does. They're all insane.

acrest8 (May 15, 2014 at 17:41)
Grew up with Ethen, the kid rocks the motorbike, killed me on the track and don't even want to talk about freestyle! He was throwing backflips and underflips on the moto in high school. Wakeboarded for hyperlight, kills it on the snowboard and took a two year break while he served an LDS mission and came back just as strong as when he left. The kid is a stud!