Skandinavia, Arctic Circle, Iceland, Lofoten Islands, etc. - these words alone give my toes frostbite. I love bike adventures, but I like them to be nice and warm, too - ideally on picturesque islands with epic sunsets.

As we disembark the plane and our bike bags roll through one of the tiniest airport terminals on the planet, I notice a large light blue sign depicting a semicircle with something resembling snow. I approach, and, what do you know: the Arctic Circle! I look more closely and discover that Kiruna in Swedish Lapland is way north of it. Come to think of it, no one had mentioned that our bike adventure will take us to arctic realms. Luckily, I always bring a down jacket that I even wear on balmy summer nights. Reckon I will need it? 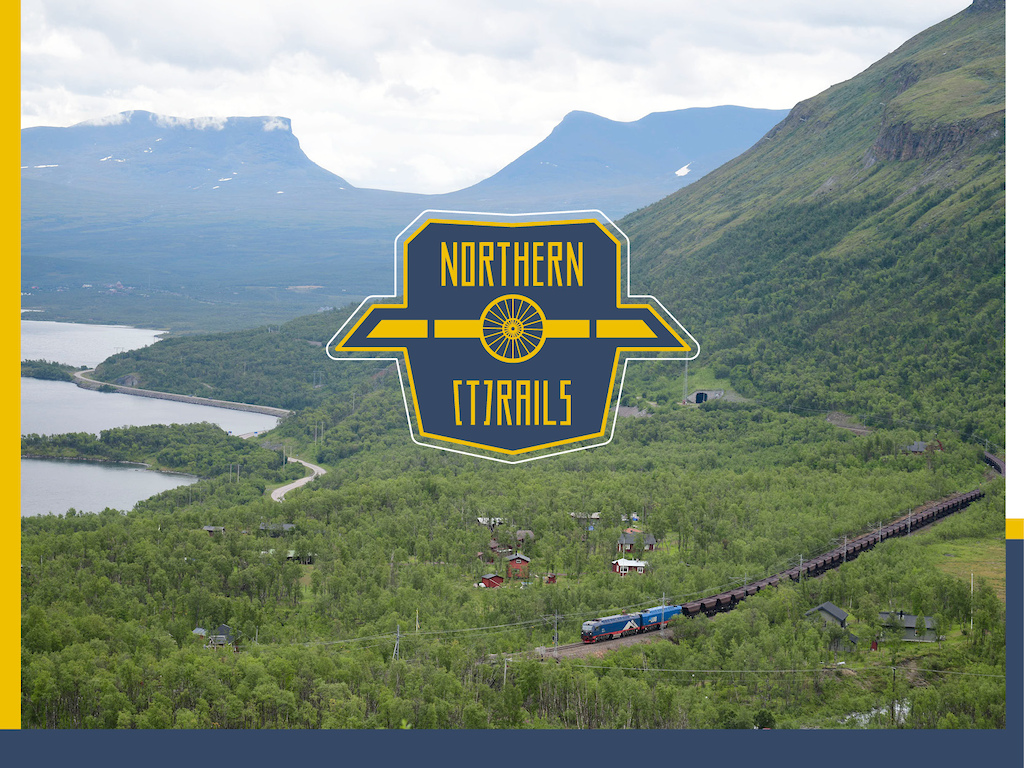 Our happy little party consisting of Holger, Jan, Philipp and myself drives due north for just over an hour along an endlessly long lake called Tometräsk to Björkliden. Only a few kilometers further lies Låktatjåkka which will play a role in the days to come. Still, for now I won’t put too much energy into attempting to remember this highly complicated name, because I’m distracted by all the other impressions hitting me left and right. For the first time in my life these have nothing to to with people, bustle and action, but the pleasant sight of extraordinarily impressive nature. 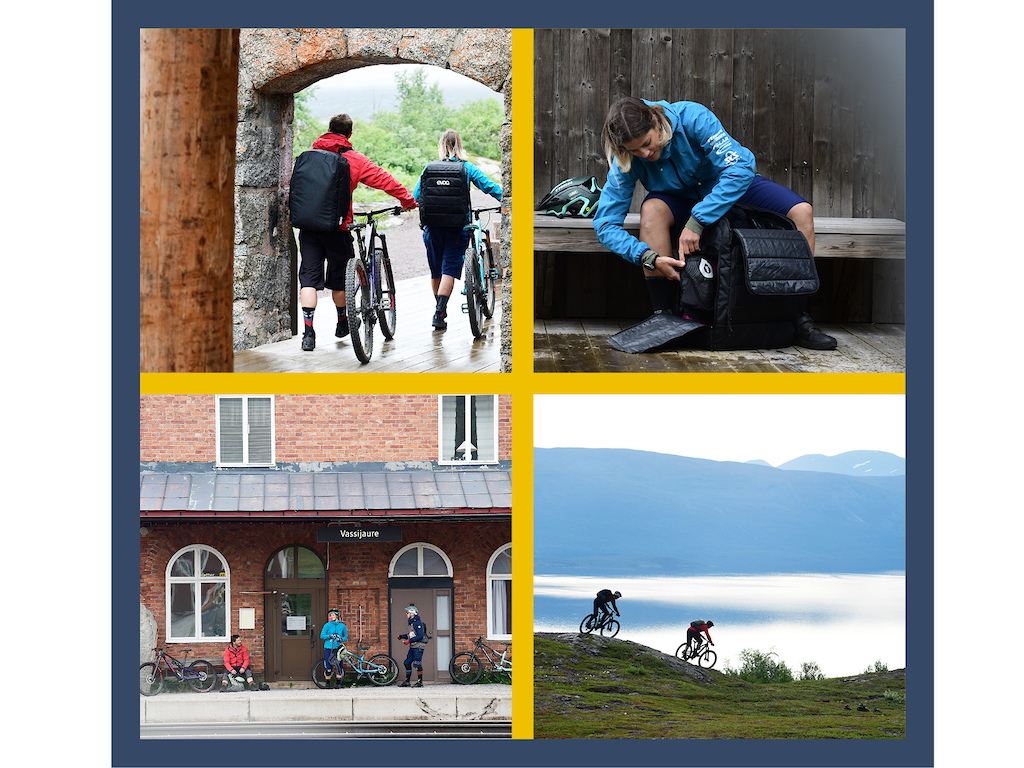 The history of Låktatjåkka, Bjökliden and their surroundings dates back to the end of the 19th century, when iron ore was found in the Swedish town of Kiruna. Up to then, the land between Kiruna and the Norwegian border had been completely untouched by civilization. There were no roads and only very few people. At the end of the 19th century, the governments of Sweden and Norway decided to build a railroad between the mine in Kiruna and the permanently ice-free port of Narvik in Norway. The “Ofotenbanen“ Railway Line was put into service in 1902 which marked a watershed for the region.

Over 100 years later, 12 freight trains a day lug thousands of tons of iron ore through the mountains to be exported globally. The service is the northernmost electric railway in the world and one of the oldest operating railways that still transports iron ore.

Next to the railway track is a 55 kilometer path called “Rallarvegen“ (also known as Navvy Road) between the Swedish national park of Abisko and Narvik in Norway. This path was used as a construction/access road to take rocks and gravel via horse carriage to the workers who were building the first section of the railway in the late 19th century. 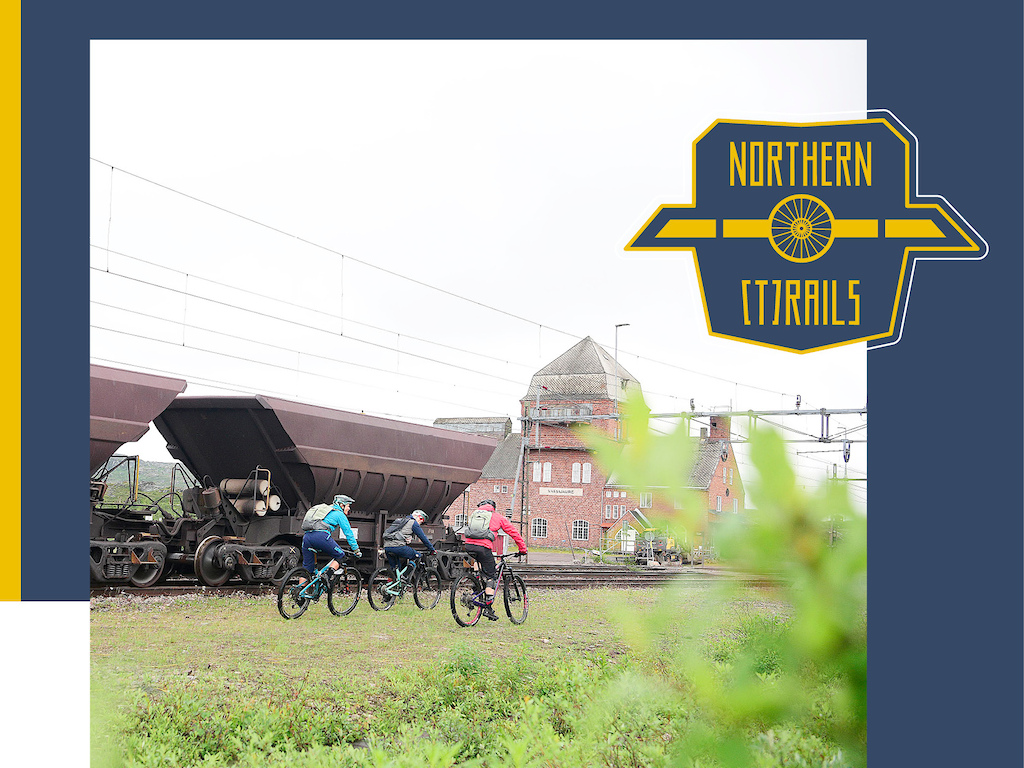 Around 25 years ago, the Rallervegen was converted into a hiking and cycling path with signs and information boards that teach tourists all about the history of this road. It would be a bit of an overstatement to say that mountain biking is a big deal up here, however, gradually Scandinavian mountain bikers have come to appreciate what an extraordinary trail riding region this actually is.

Rallarvegen is the primary arterial for biking in the region, but the real jewels are its detours into the mountains and they are also the reason why our guide claims that this area offers the best mountain biking in all of Scandinavia. And by the way, our guide is no other than renowned outdoor sports photographer and native Swede Mattias Fredriksson. In the meantime he has moved to Canada, but as we greet him in the Abisko mountain lodge, you quickly realize that this is where his heart belongs. Immediately and full of excitement he shows us everything he has in store for us over the next couple of days on a map. From now on, we literally and figuratively have to pull up our socks, because Mattias turns out to be a really exuberant character with almost endless energy.

It is midsummer and as we are so high up north, the sun never really sets. It simply dips beneath the mountains for a few hours which leaves us with about 21 hours of daylight. We want to make good use of these long days and begin the first one with a short tour before breakfast. We scout the area around the Abisko lodge where, after only a few meters of altitude, we quickly dive into a beautiful setting of lakes and waterfalls. The rising sun reflects off the majestic Tometräsk lake, which is Swedens largest lake, by the way. We can’t wait to see more, so after a traditional Swedish crispbread breakfast, we depart on a more extensive tour to Låktatjåkka. 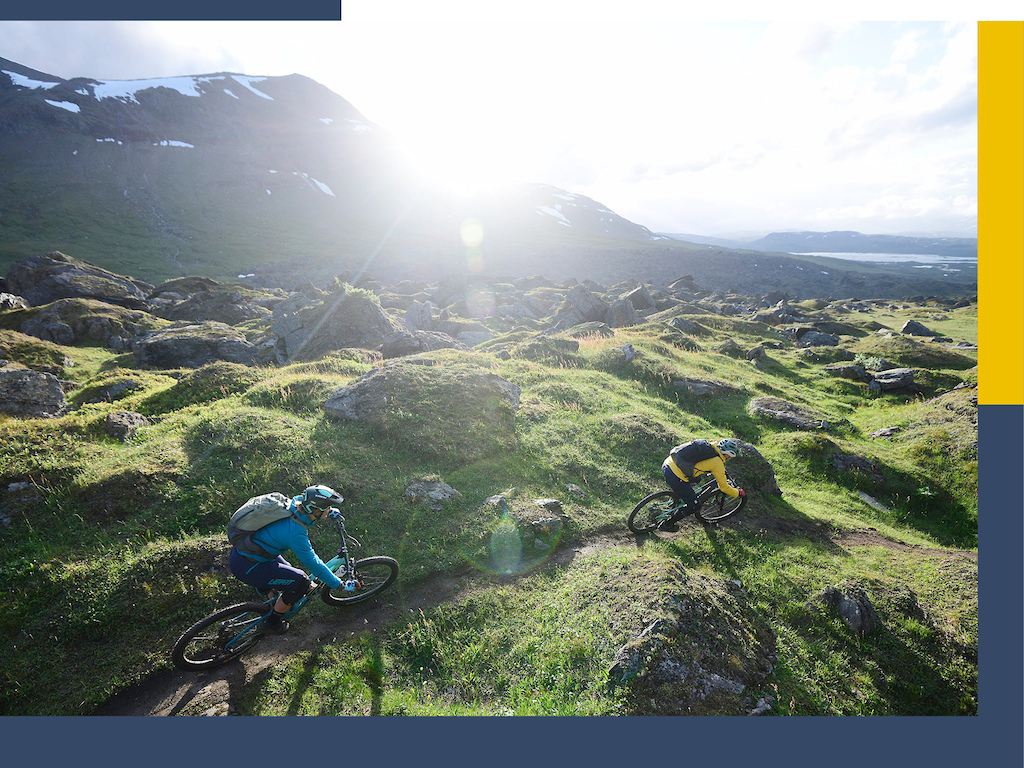 Låktatjåkka is Swedens highest mountain hut. It was built at the end of the 1930s and is located at an altitude of 1224 meters above sea level. There is not a soul in sight and we feel like we are in no man’s land as we work our way upwards through a picturesque birch forest into an increasingly barren landscape right up to the snow line. After a few exhausting hours and approximately 740 meters of altitude, we reach the hut. Låkta’s famous waffles with regional moltebeer jam quickly revive us, because even though it is already 7 p.m., we still have a long way to go. The descent is the bomb! We set off through snowfields, then ride over lush meadows with flowy trails and rocky ledges, around rock formations and always towards the vast lake. The entire ride takes us around 2 hours including a few stops for pics, but seems never-ending. What a day! The cherry on top comes in form of the excellent food at the Abisko lodge in front of the most beautiful panorama window I have ever seen in a restaurant. 1 - 0 for Swedish Lapland, maybe I need to reconsider my island fetish! 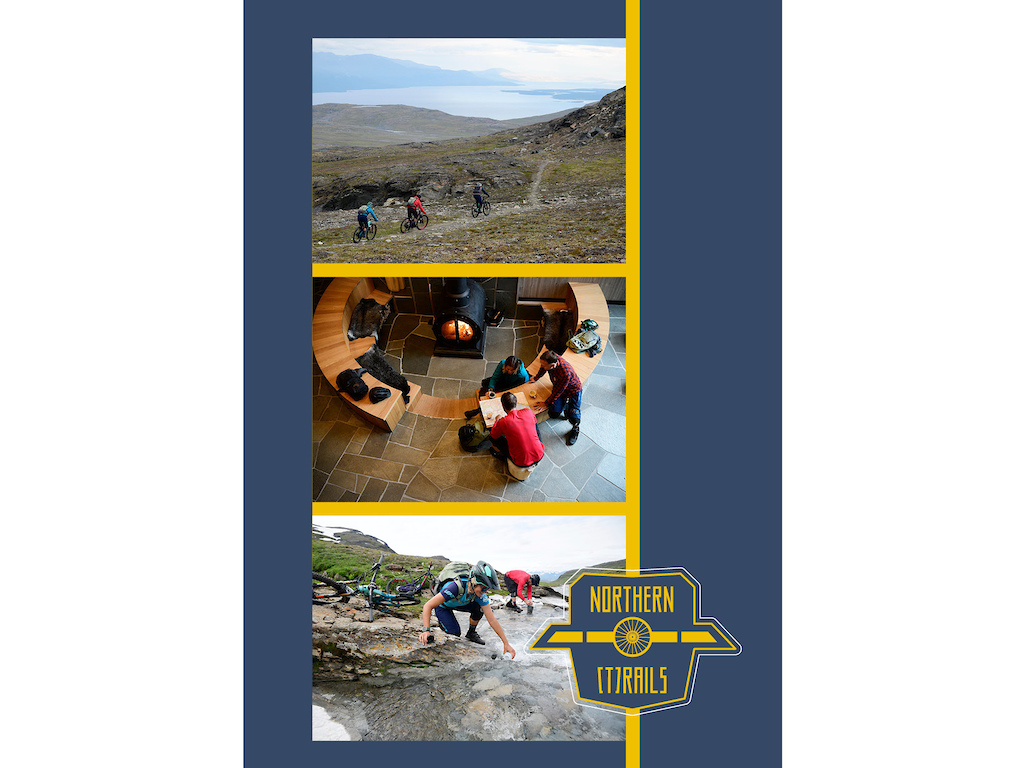 40 kilometers east of Björkliden lies Riksgränsen - a legendary little ski resort with 40 inhabitants, two hotels, a few lifts and a supermarket. In late spring, this place is vibrant with the thriving international winter sports scene. The oldest freeskiing contest on the planet - the Scandinavian Freeski Championships - has been held here annually since the early 90s and since then some of the best freeskiers in the world converge here regularly. Heli skiing in the vast backcountry is just as world famous as the midnight sun. Many photographers, film makers and professional athletes travel here from far away in order to capture this marvel. Compared to the busy spring, the summer season here seems to be in some kind of whacky “hibernation“.

In the past, Riksgränsen was the most famous border train station between Sweden and Norway where both nations coupled their own locomotives to the trains. We reach the Niehku Mountain Villa, an award-winning lodge right on the Norwegian border. In the Sami language, Niehku means dream and that’s exactly what this luxury hotel integrated in the ruins of the old train roundhouse seems like. The circular wall of the roundhouse runs through parts of the new structure, which makes the building very exceptional. The stone and wood house is an architectural masterpiece and its location - with marvelous views of the surrounding mountains and lake Vassijaure - is simply breathtaking. We literally sleep at the centre of the place’s railway history. Naturally, we also have to go biking on the Rallervegen from here and so we embark on our second big tour, the Geargevággi which means rock valley.

The valley reaches all the way up to Rissajaure (in Sami) or Trollsjön (in Swedish) which is Sweden’s clearest lake. All in all, the tour is about 14 km long with approximately 370 meters of altitude. The regular route from Låktatjåkko station to the lake is one of Swedens most popular hiking routes. This is why we trust our guidebook and take the route of the locals a little further north starting from Vassijaure which is Sweden’s northernmost train station. 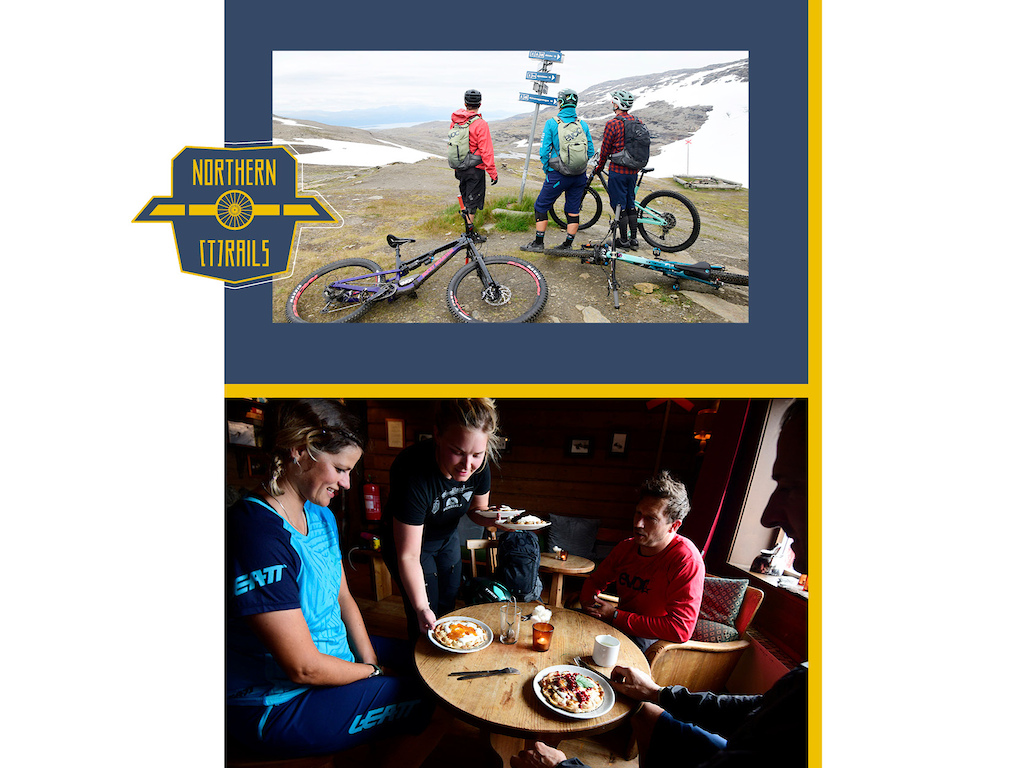 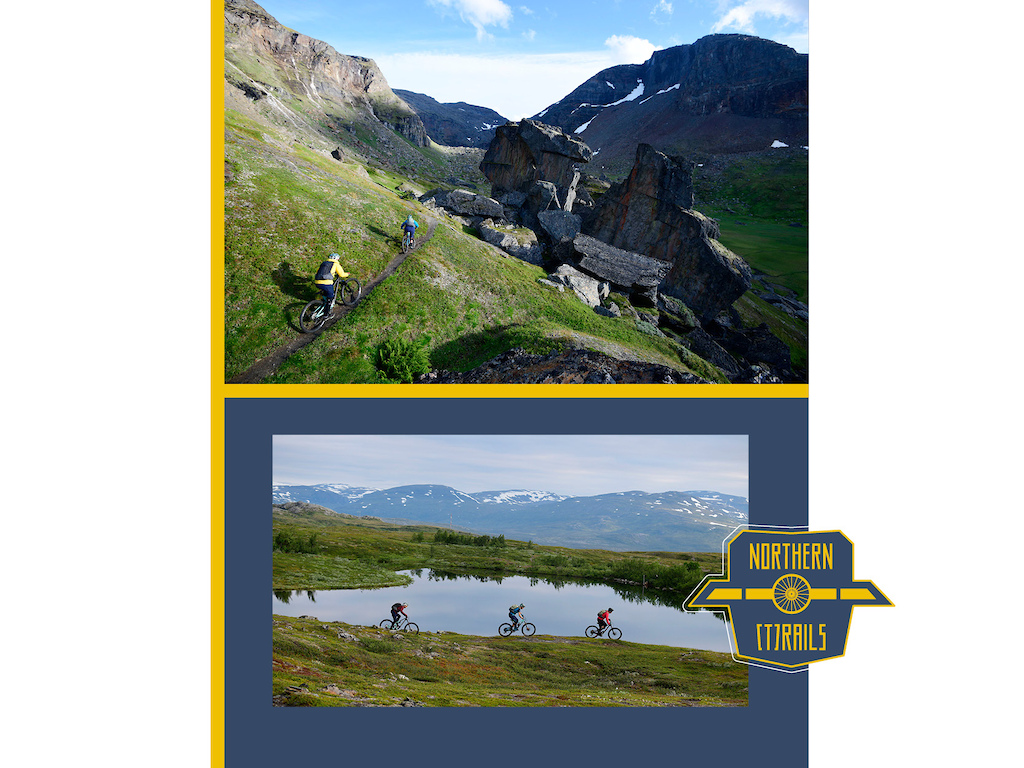 The route from Vassijaure gradually climbs along the contours of the gentle hills, so we can ride up most of it. The more popular route from Låktatjåkko is not only much more crowded, but also, in parts, a little too steep and technical to ascend by bike.

Geargevággi is a valley that was formed during the last glacial period over 10,000 years ago and is littered with beautiful and sometimes enormous rock formations. There are lush meadows full of mountain flowers, little streams and a river delta. The landscape is of unique beauty, but sometimes you also feel reminded of the valleys amid the lofty mountains of the Alps.

Quotation Mattias: “I am privileged enough to be able to go to so many fantastic places in the world to ride my mountain bike, but I have to say that the experience in Geargevággi ranks right at the top of the “wow list“. As I am Swedish, I am possibly especially proud of my homeland when I show Friends from other countries the beautiful places here. Riding in Geargevággi is definitely an adventure and even though parts of the route are too steep or technical, the overall experience of this tour best defines what mountain biking is about.“

In the beginning I spoke about the cold I was so scared of and you can really refer to the climate as harsh, even in midsummer. But as we were moving a lot, I wasn’t cold. The severe weather conditions merely served to amplify the sense of beautiful solitude in untouched nature. The fact that you are riding along the historic path of an ancient iron ore railway added a very special, deeper meaning. I am very grateful for this cooling-down and the truly refreshing experience and I can only recommend a trip to the “NORTHERN (T)RAILS“ to every adventurer out there!

elyari (Nov 10, 2021 at 2:03)
Nice writing, another spot to add to the ToDo list for fure. Maybe adding a link to the routes you did or the areas visited, a map. @trailforks is very helpful with that. Here is Lappland region: www.trailforks.com/region/lappland-13765

Pandola (Nov 10, 2021 at 9:19)
Just returned from working and living in this very same spot for two months. So this video was a really bittersweet discovery! Nature and landscape is an absolute treat there! Definitly will be back!

ChrisLanaway (Nov 12, 2021 at 9:42)
This is a big problem with northern sweden, for the most part. The alps are much easier to get two and much better in terms of infrustructre etc. Plus no midges

lideri (Nov 11, 2021 at 4:21)
@dothecrux: They are ever present unless you go below zero degree temperatures. But they can only catch you when you are stationary so you got a strong motivator to keep moving, and when you get above the three-line there is a lot less of them

Pandola (Nov 11, 2021 at 9:46)
@lideri: I was there from the beginning of September onwards and mitches were gone already... Don't know which month they start to appear though