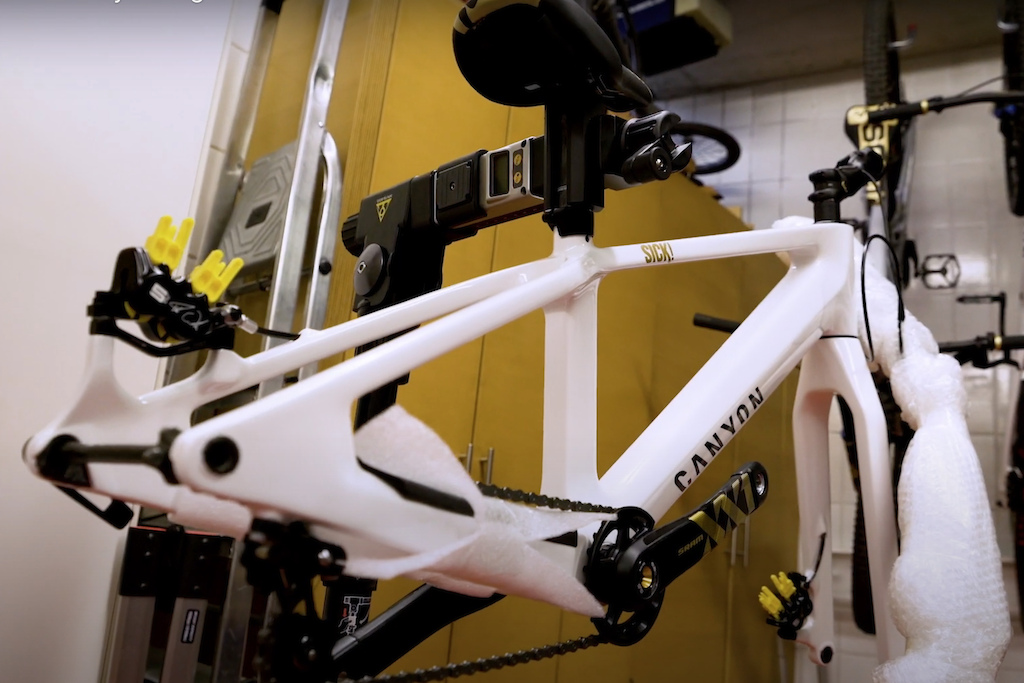 Canyon currently doesn't sell a trials bike of any description but Fabio has made no secret of the fact he has been working on a carbon one with the German brand and told us about it in an interview last year. Finally, we get a glimpse of it thanks to this garage tour video. The lighter weight of carbon gives an obvious advantage in the precise and dynamic world of trials where accuracy is key and we're sure we'll see it in action in a video from Fabio soon. There's no word yet on whether Canyon is planning to release this to the public or, like Danny MacAskill's Santa Cruz's carbon trials bike, it will remain a YouTuber only limited edition.

Jvisscher (Jan 18, 2021 at 7:29)
As a dentist I love/hate Red Bull and seeing people sipping on it all the time. Complex Carbohydrates+Acid+Time. They sponsor the sports I love and support my business at the same time! Symbiosis.

Jvisscher (Jan 18, 2021 at 7:39)
@kcy4130: If I cared what people thought of me I wouldn’t have become a dentist. Besides, anyone who knows me knows I spend more time building trail than anything else so anonymous jokers can enjoy themselves without hurting anyone’s feelings.

Jvisscher (Jan 18, 2021 at 7:57)
@secondtimeuser: you can buy a lot of trail building tools, excavator time and lumber/screws for the difference between a comp and an S-works. Also, buy/sell used stuff is a great Pinkbike feature. Check it out!

QuebecPoulin (Jan 18, 2021 at 13:11)
I feel that in a few years (finally) people will realise how much sh*tty is this stuff and athletes will stop getting sponsor by theses compagnies energy drinks/bars/juice/etc.
Just like a few years ago cigarette companies were sponsoring sports and athletes.

Jvisscher (Jan 18, 2021 at 14:05)
@QuebecPoulin: the responsibility can’t be on an athlete to not take sponsorship. Ideally you don’t consume unhealthy products more than occasionally. But If people choose to overindulge, why not do something good with some of the profit? Now cigarette companies can’t spend on advertising so they keep the $ as profit. You can have some of that profit as a shareholder if you like. In a capitalist world, the responsibility lies with the consumer.

loamfiend (Jan 19, 2021 at 8:43)
@QuebecPoulin: There was a group of snowboard athletes that felt the same way and started a company called 'Drink Water' www.wedrinkwater.com While promoting drinking water in place of energy drinks they also donate 10% of their merchandise sales to water.org to help bring safe drinking water to places that doesn't have it.

It was be cool to see that brand grow into other sports scenes as I think its almost unknown outside snowboarding.
** Just noticed Josh Bryceland and Josh Lewis are sponsored by them. So 50to01 is on board.

cwatt (Jan 18, 2021 at 8:26)
I actually sent a letter of inquiry to Santa Cruz about their carbon trials bike to which they stated they had no intention of producing. Perhaps Canyon might take that opportunity?

rossluzz (Jan 18, 2021 at 8:41)
The world needs more trials bikes. Even Ibis used to make a trials bike. I have been shopping for a street 26” trials frame and there’s really only two options out there: Inspired Hex or Czar Neuron. The Hex you can’t even buy as frame only and the Neuron 26 can’t be found in stock anywhere.

labourde (Jan 18, 2021 at 13:33)
@rossluzz: you are right, it is very difficult to get a 26" street/trials bike.
There is a small compagny called Vienna's finest (www.viennasfinest.bike), which produces also a steel frame. Jitsie offers a 26" that is a mix between pure trials and street/trials. Not sure it is really enjoyable.
You can also have a look at a park bike like the octane01 spark. The geometry is close to a street/trial bike. Or you can just buy a really old 26" trial bike (monty, orange zero) if you are a begginer.

The reason they made one for a single rider is to promote the brand.

... and yeah, I have a trials bike (Hex), trust me, no one cares about trials, it's less popular than unicycling, seriously.

cwtrials (Jan 18, 2021 at 19:44)
I used to run an online trials shop. There is almost zero market. When I ride my xc bike there are more mtb riders unloading their bikes in the parking lot than trials riders in my entire state.

hmstuna Plus (Jan 18, 2021 at 23:40)
Check out extention. They make a carbon trials bike called the avenger. It looks to be heavily inspired by the Santa Cruz and two also a 24.

mehukatti (Jan 19, 2021 at 1:16)
@nurseben: True, but Canyon street trials bike could still be a succesful niche model and maybe spark new interest in the category. I mean Fabio has 6 million followers in Youtube, and if only 1/10000 would buy the bike, that would still mean 600 bikes sold and if the price is 2k, the revenue would be 1.2M.

rossluzz (Jan 19, 2021 at 7:42)
@cwtrials: It's true, trials was never huge in the U.S. but it feels like it has died out significantly compared to a decade or two ago. I remember trials at the NORBA events drawing big crowds and they loved watching the demos and competitions.

ReformedRoadie (Jan 19, 2021 at 12:14)
@rossluzz: Maybe it was hurt more than other disciplines when things started to split from one rider on one bike doing DH, Hill Climb, XC and Trials on the same race weekend...but we're talking 30+ years ago min.

labourde (Jan 19, 2021 at 12:53)
@rossluzz: It has died out significantly in Europa for sure.
Street/trial became mainstream around 2009 through Macaskill. The trials world was then splitted: comp riders from one side, street/trial rides on the other side. The TGS (taps, gaps, sidehops) almost disappeared
Both riding styles evolved and currently, the average joe can't identify with both of them. Too specific!
This was not the case with Leech or Lenosky.
I think Danny brought a fresh wind, bringing some BMX/street riders to trials.
Now we have the fourth generation (Rey, Leech, Macaskill) thanks Fabio Wibmer. This one is more about the image, riding exposed lines, doing some stunts.

The last teenagers I rode with were all interested in tricks like footjam whip, fakie manual, front wheel hop. But not in a static hop or a line on some stones. They don't realize that most of the bests in the worlds have amazing comp trials skills. Danny was an incredible TGS rider before 2009. Ali C. and James Barton were present on some WC. Akrigg is 6x british chanp. Duncan Shaw has solid comp background. Pat Smage is 11x moto trial US champ... So I think newcomers try, do not understand why they don't go that high or maybe the get more injured due to a lack of balance. Maybe they then understand, that it requires a lot of effort/dedication, to be really good. I think some of them then lost motivation or get bored.

Jmac888 (Jan 19, 2021 at 1:53)
Has almost a complete fleet of custom Canyons but not one Strive among them- interesting! I guess no need for a dual mode 29er enduro bike when he has a Torque and a Spectral- who needs a quiver killer when you have an actual quiver!

claustn (Jan 18, 2021 at 7:42)
Well, you can already see Fabio with this bike in action actually, riding in Innsbruck! www.youtube.com/watch?v=uVR38Oky6uU

rattapatpat (Jan 18, 2021 at 8:40)
If you put closed captions on he says truss bike, kenya bike, twice bike, trousy bike, choice bike, and charge bike, but never once does he say canyon trials bike

pedaladdictioncollective (Jan 19, 2021 at 9:30)
how has nobody commented the fact he's using hollow armed carbon xc cranks on a trials bike lol