Ride Québec City is a 4-part mini series showcasing the riding in and around the Québec City Area. This is episode IV, filmed at Sentiers du Moulin.


Mountain biking heaven? That’s quite a claim to come from someone who makes a living riding the best mountain bike trail in the world… He has seen a lot!

I tend to agree with Brian, the riding at Sentiers du Moulin has something special to it. Not sure what it is though, but it surely has something to do with the strong support the trail centre is receiving from the city and the residents.


For this last shoot, we were joined by Andréane Lanthier Nadeau, also known as ALN, who was on vacation after a busy few months racing the EWS. She spent lots of time riding at Sentiers du Moulin as a youth and she was happy to get to ride the newest trails with local trail builder Nic Sauvé.

The weather conditions were less than ideal with rain, hail, freezing rain, snow, and nasty wind chill, but we proceeded regardless with our plan, starting at the “Summit 1” to ride KingKong, SuperG and Basse SuperG. 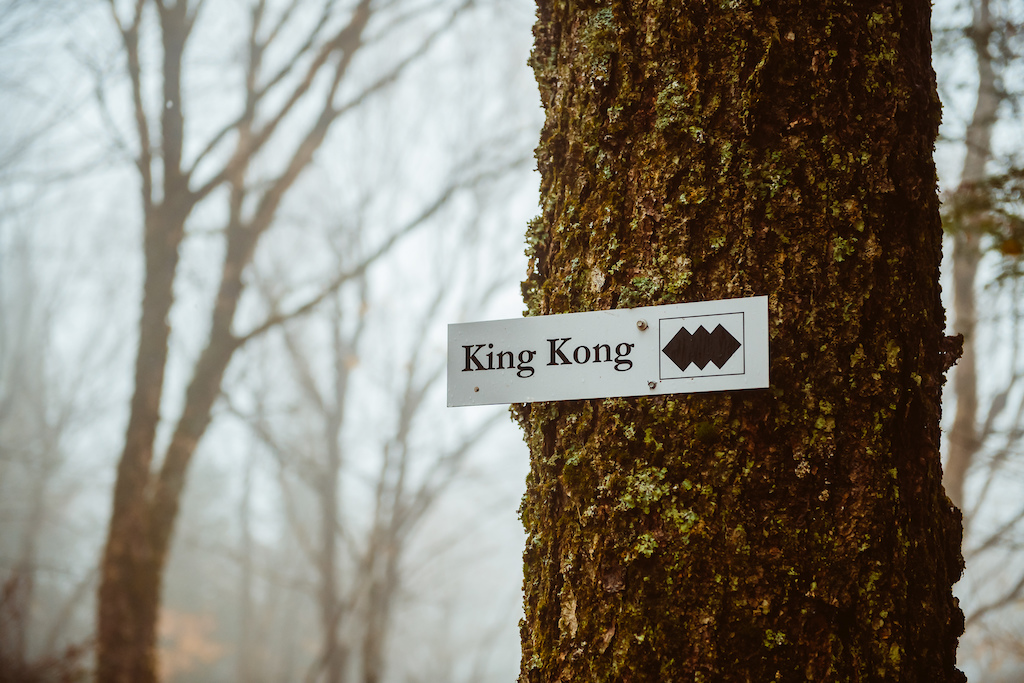 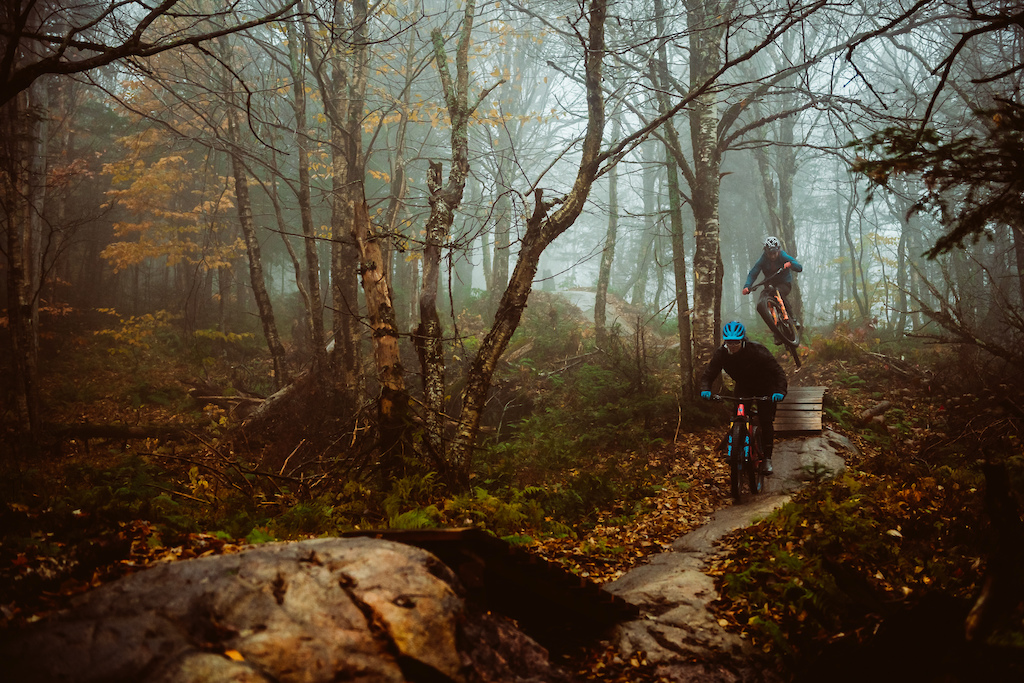 Largely built by Jeff Dubé, KingKong has been open for a couple months and was an instant hit amongst the freeride crowd. With its right mix of sizeable drops, creative woodwork, intimidating rock faces, lack of “chicken lines” and a mini road gap, this triple black diamond (??) trail is a pleasure to ride. 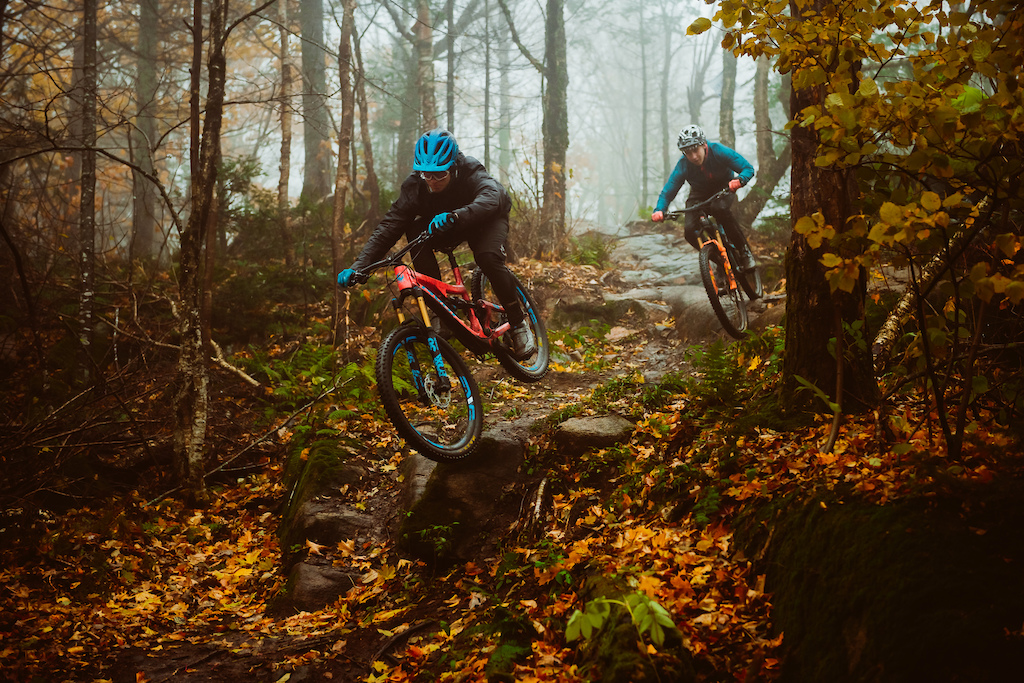 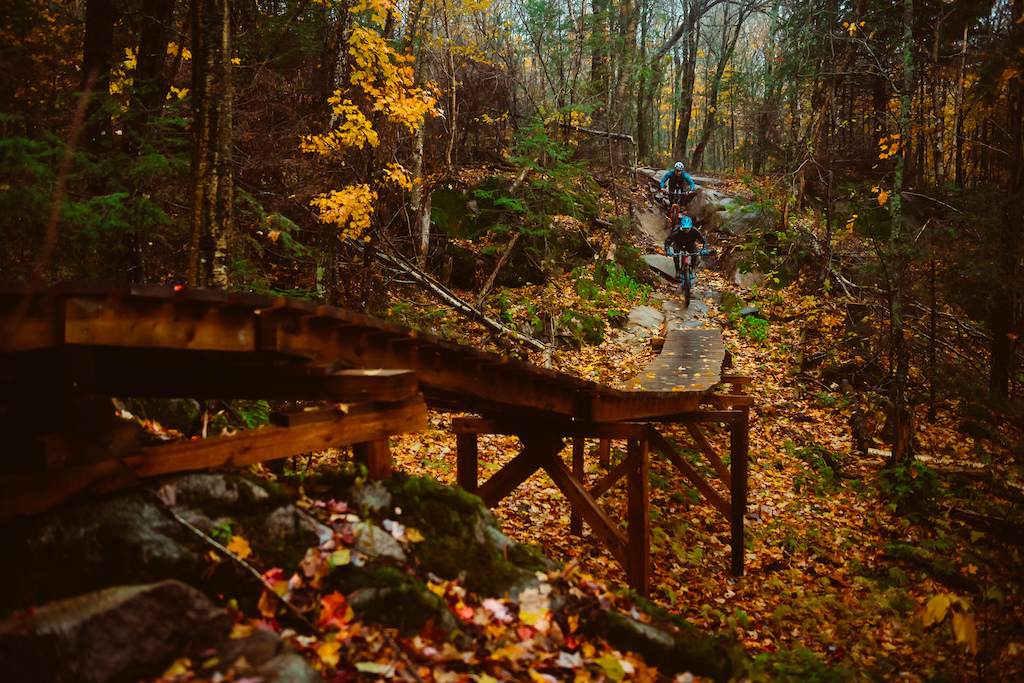 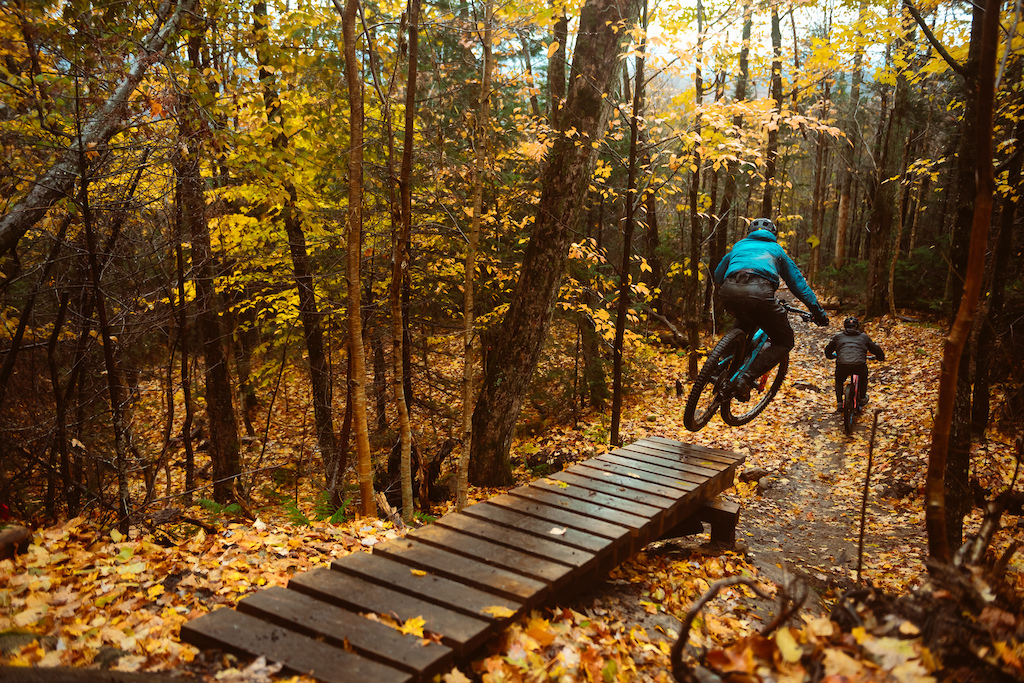 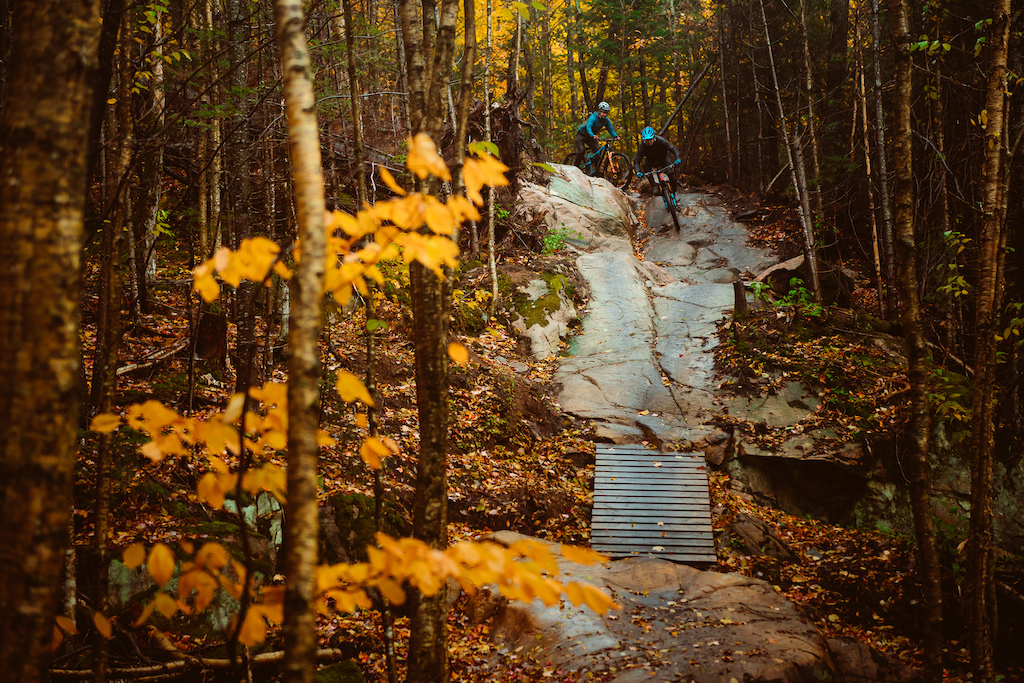 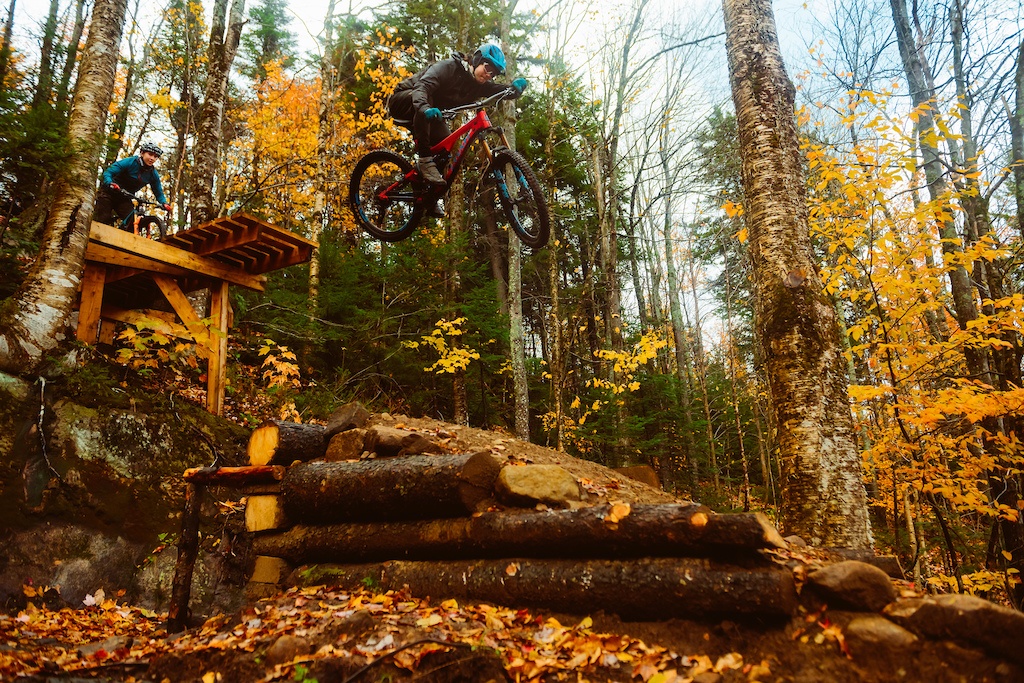 After shooting most of KingKong, we didn’t have much time left so Nic tried to chase Andréane down SuperG. Not easy! 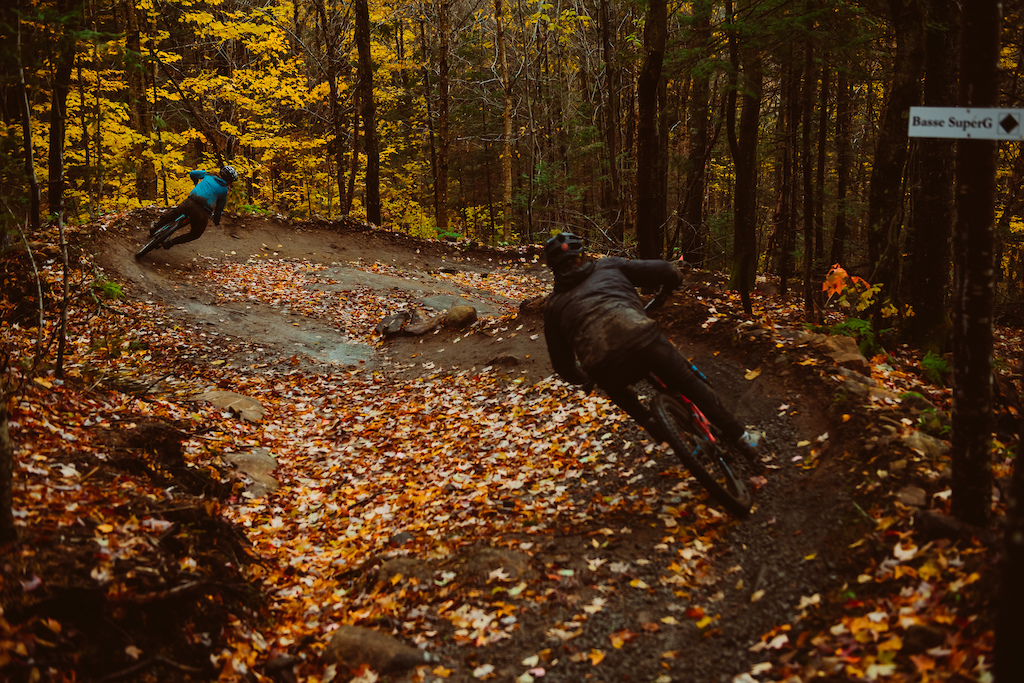 The next day was all about Wolverine, Nic latest creation. This new trail is the first to be officially built on Mont-Tourbillon. It’s the first step of an ambitious project aimed at integrating mountain biking into an outdoor recreation real-estate project called the Maelström.

Thanks to LB-Cycle, the local trail building crew, this impressive trail was almost built in a single season! Only scoping and rough clearing were done last Fall. 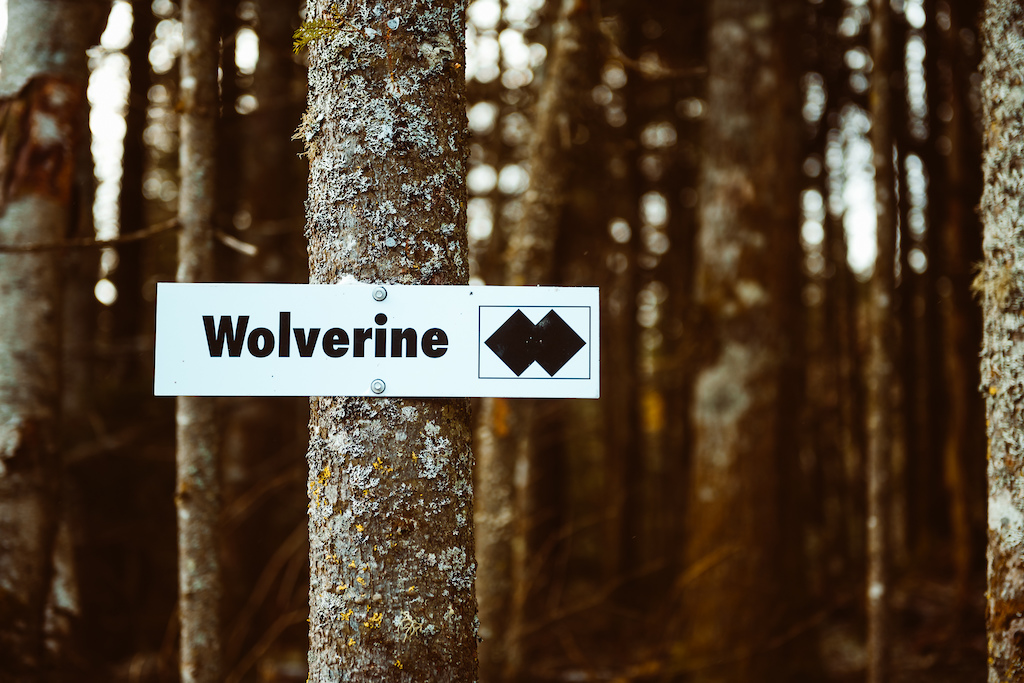 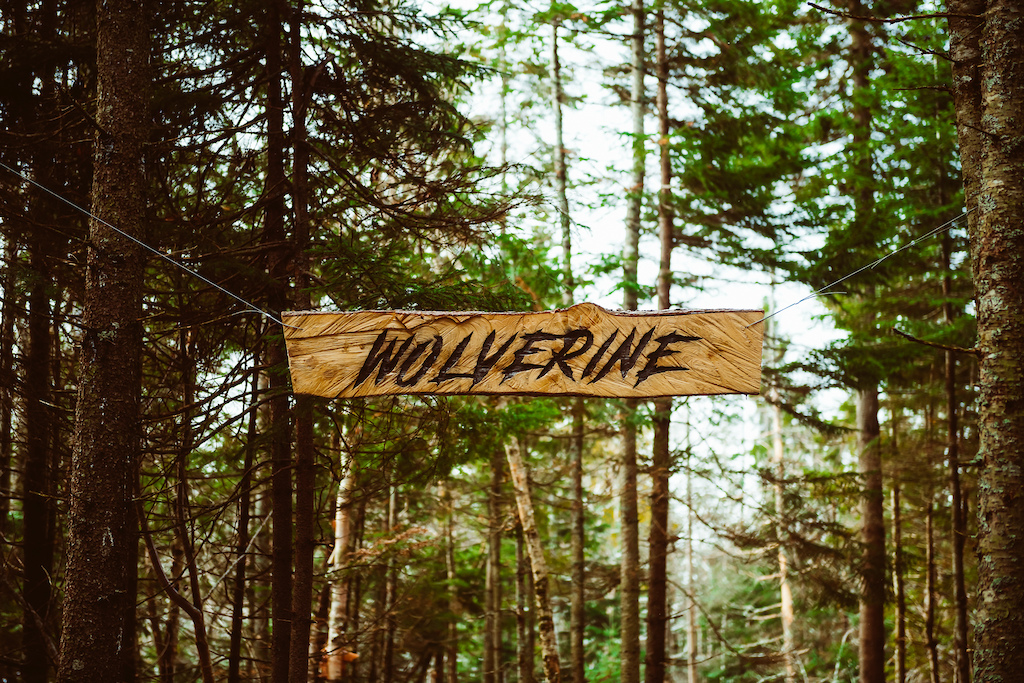 To shoot that day wasn’t easy. With the windchill, it felt like -15°C, cold enough to render Andréane's freehub and Nic's dropper post useless. We had to regroup in a chalet to warm the bikes and hope for the sun and wind to collaborate. And they did! An hour later, we were back on the trail. 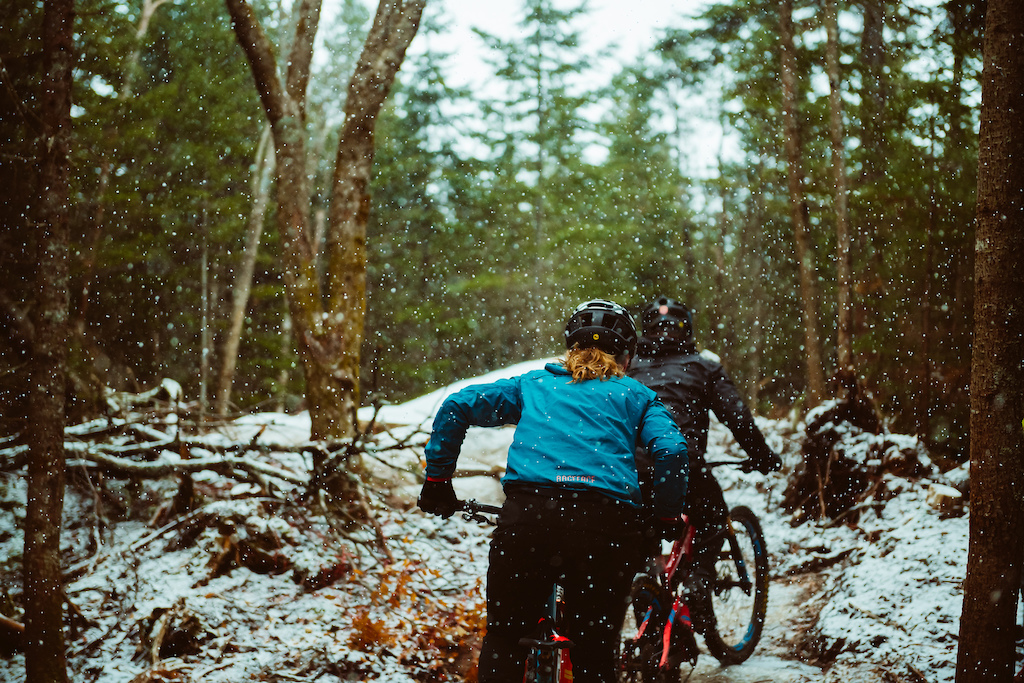 
This new zone is strongly characterized by its granite. The whole mountain feels like a big rock pile covered with moss, hiding crazy lines and perfect slabs… It’s the perfect playground for creative trail builders. 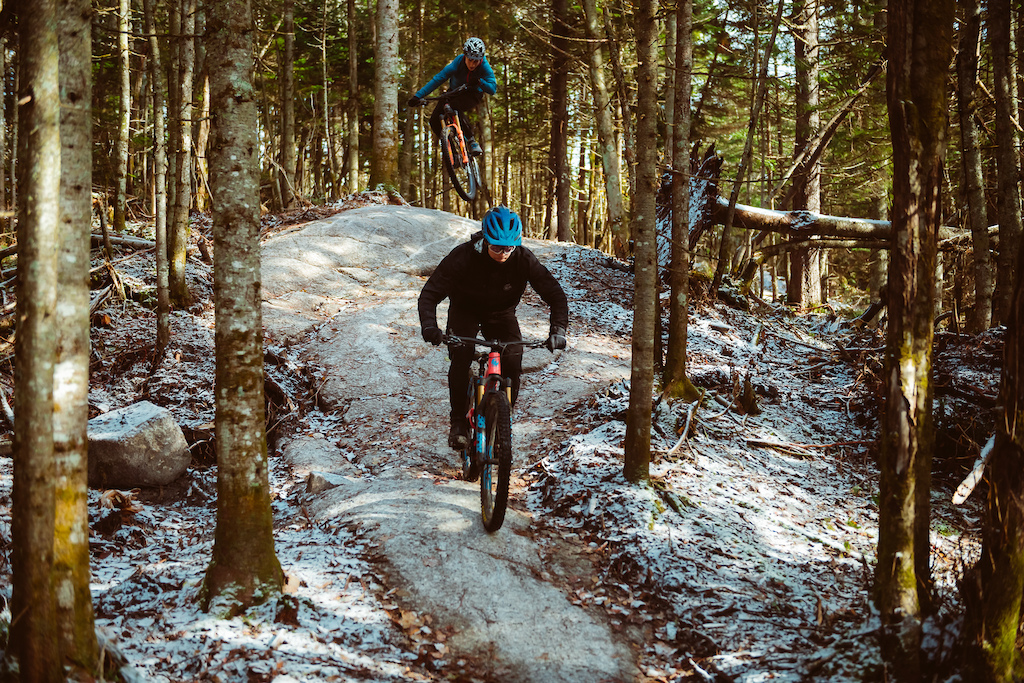 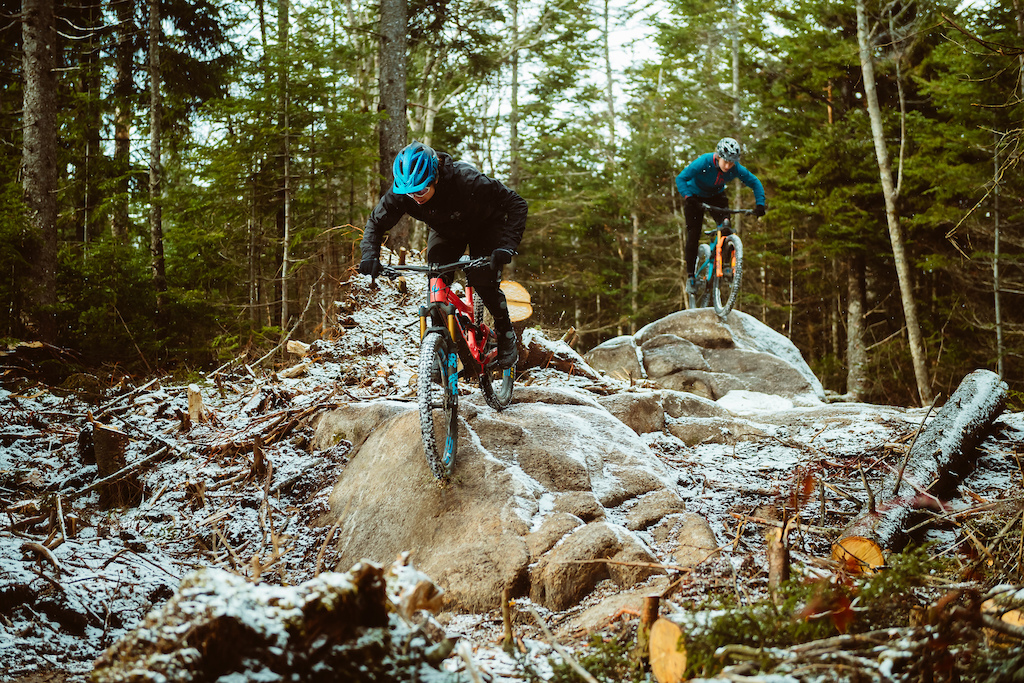 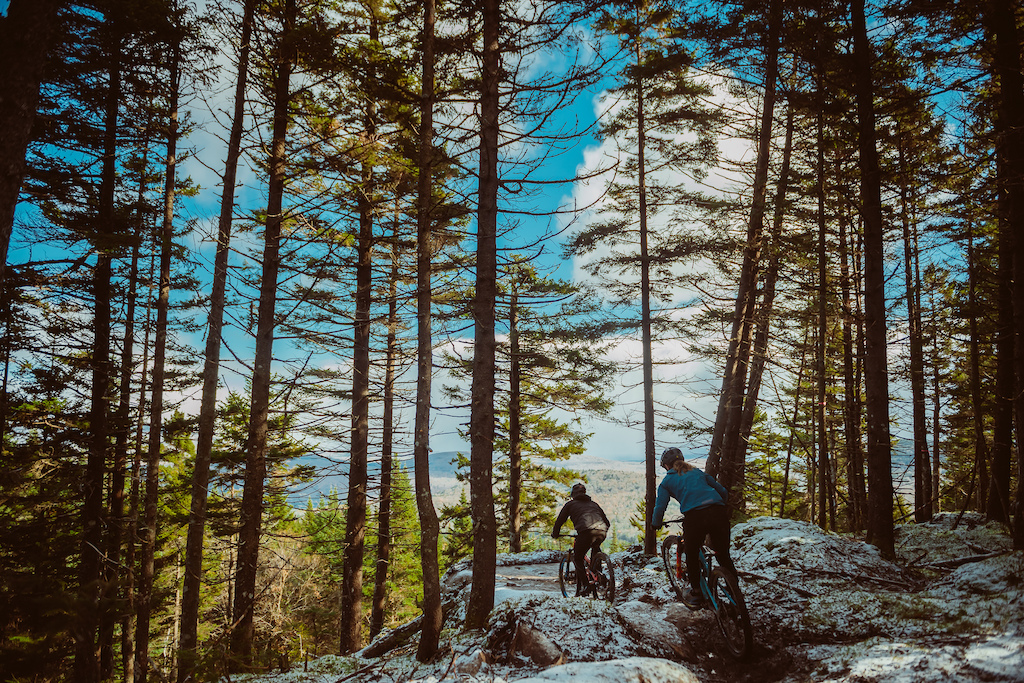 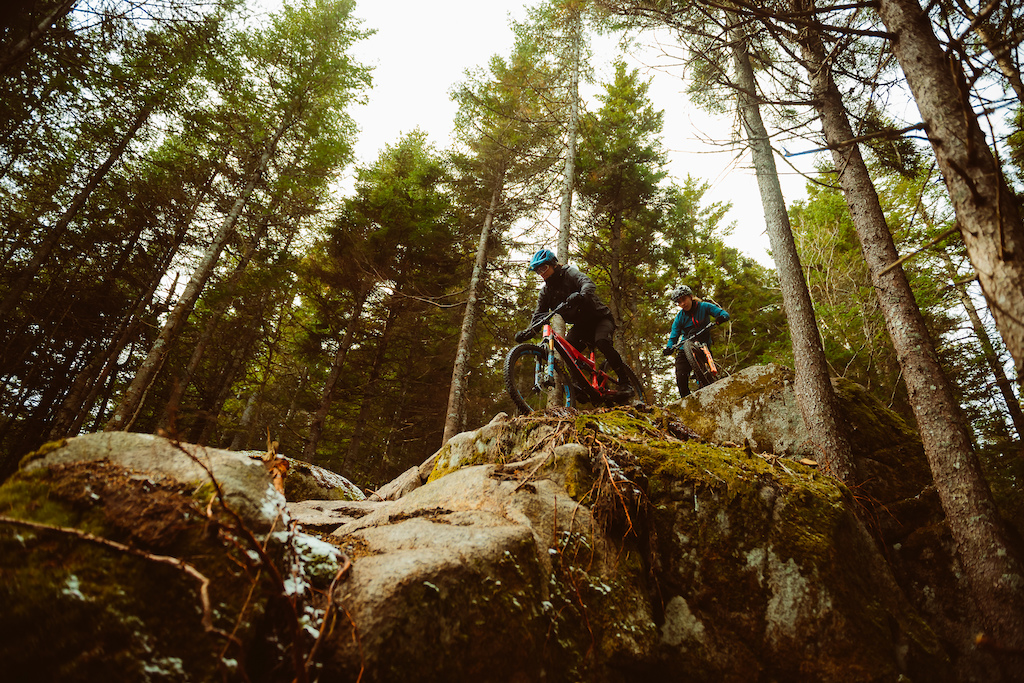 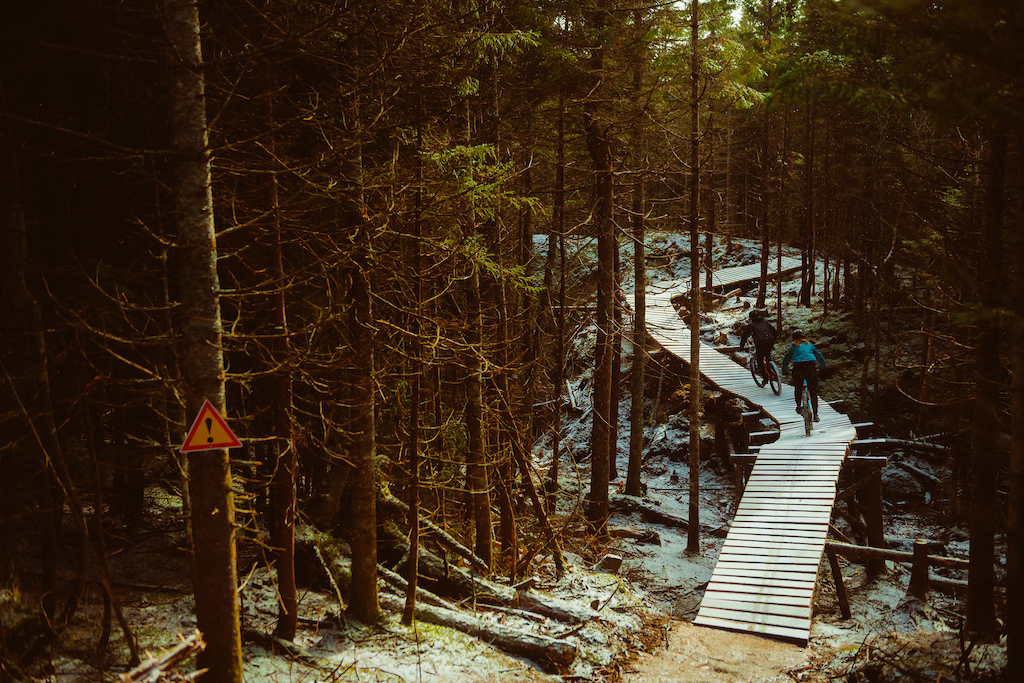 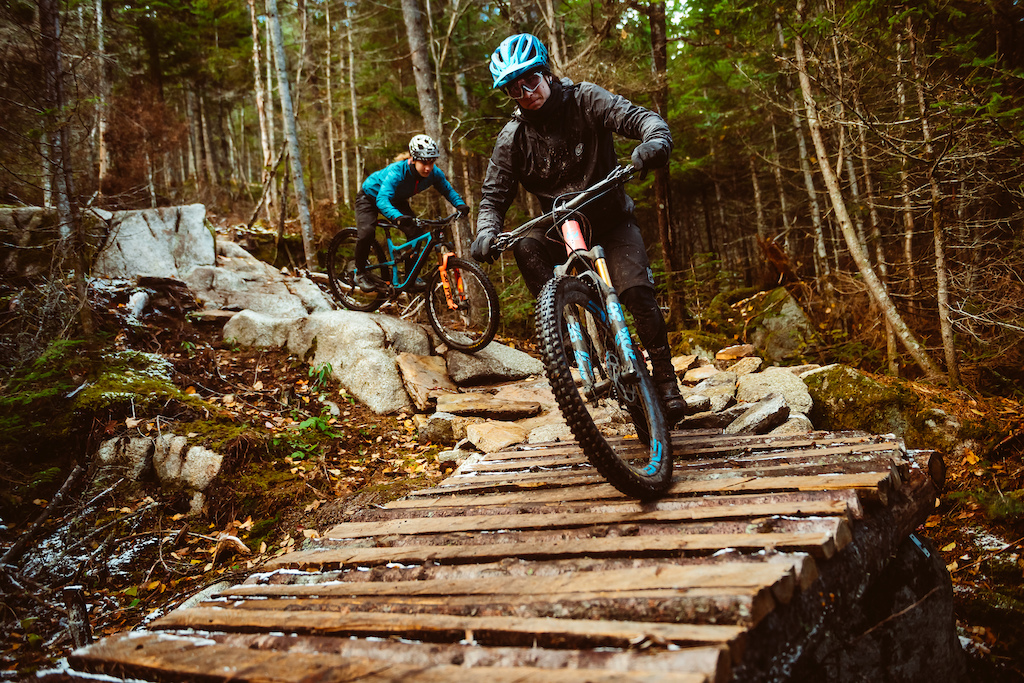 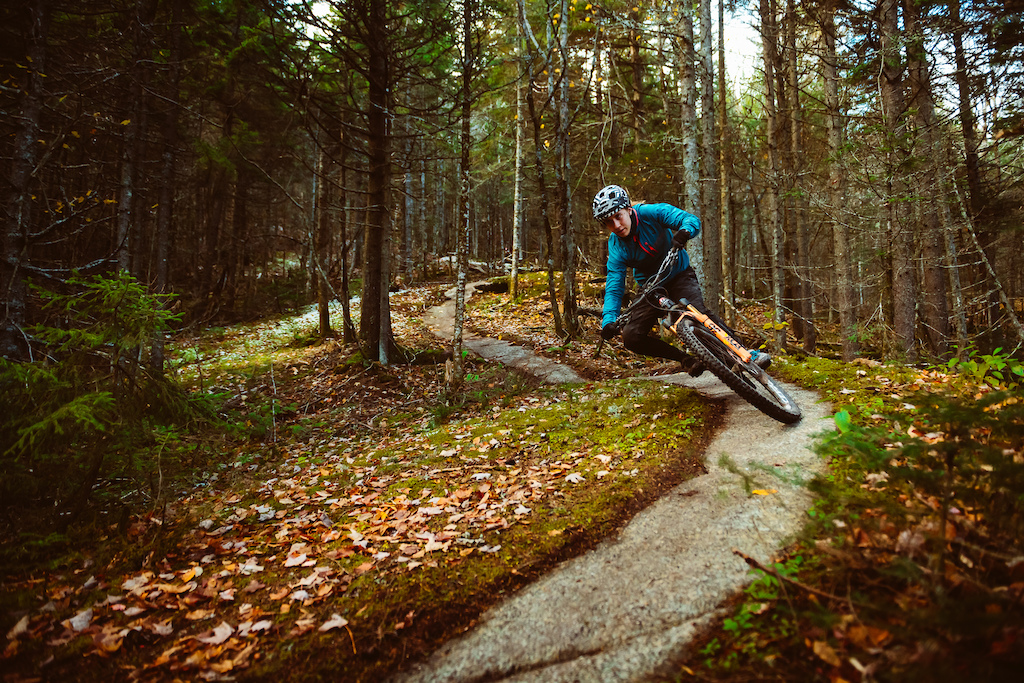 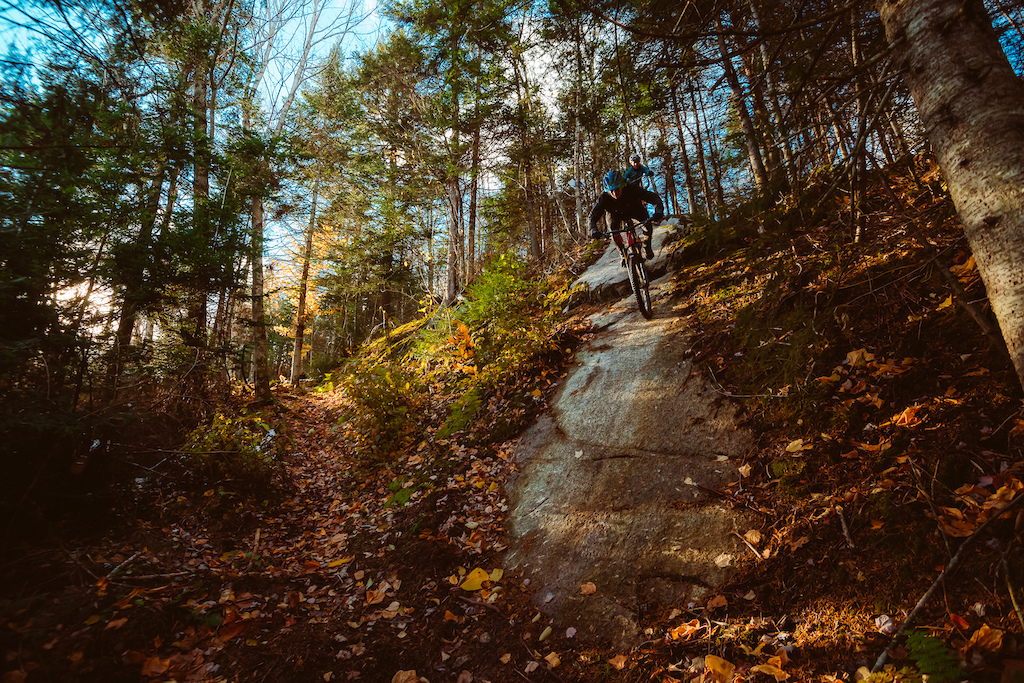 And that’s a wrap for #RideQuebecCity 2018. I hope you enjoyed discovering the trails that surround Quebec City as much as we enjoyed creating this content. 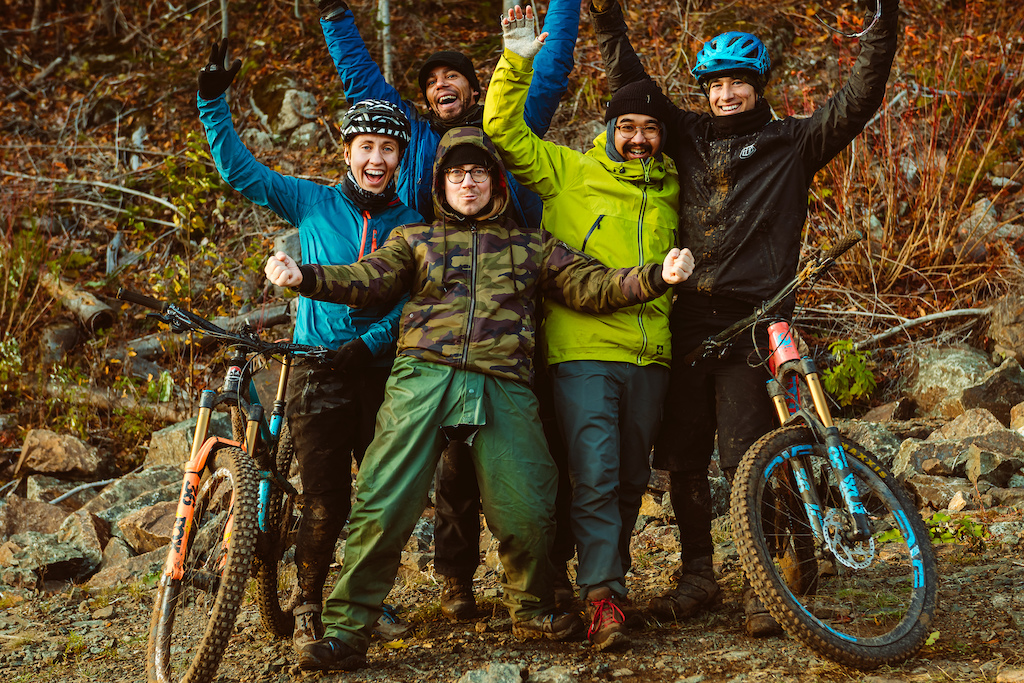 Thanks to everyone who made this happen!

Need to plan a trip to the area?
Visit quebecmountainbike.com

mnorris122 (Dec 6, 2018 at 6:24)
Damn! Amazing! I just applied to the program where the federal government gives you a nice big bursary to go spend 5 weeks in Quebec studying French at school for a few hours a day and partying at all other times (in French, of course.) I'll 100% be bringing my bike, but this video's reaaaaaaally making me hope that I actually get the Quebec City placement now (though Trois-Rivieres looks pretty good too.)

fred0 (Dec 6, 2018 at 5:28)
It's weird. At 5 degrees celcius, my bike start to work like sh*t... Tires are stiff and don't grip, Suspensions feels like locked, and my brakes feels different... Anyway, when it's 0 celcius or colder (add snow to the mix), I left my full suspensions inside and ride my fatbike on easyer trails...

Nonetheless, SDM is an incredible place to ride!

mnorris122 (Dec 6, 2018 at 6:19)
Not all that weird...rubber hardens and doesn't grip as well at low temps, suspension fluids become more viscous, brakes do need some degree of heat in them to get the most friction down, and I've found that the bite point on just my rear brake moves out a lot, maybe there's a bit too much water in my brake fluid or a seal's wonky or something.

eblackwell (Dec 6, 2018 at 7:48)
When it's cold I find I have to speed up my rebound significantly (~3 clicks) to compensate for the oil in the suspension being thicker and slowing it down. Makes a big difference I find!

colincolin (Dec 6, 2018 at 8:27)
Trails looked like techy and fun but not nearly insane enough to need an expansion of the 1-2 black diamond mark.

dolmen (Dec 6, 2018 at 11:26)
For me, some of the steep slabs and tight run-outs down Wolverine are a lot gnarlier than any drop or feature on King Kong. I know however that trail raitings are biased in every case. Huge props to both riders! Some of those features are worthy of Squamish-level gnarlyness!

dldewar Plus (Dec 6, 2018 at 9:43)
OMG. Now I get why slack head angles are the in thing. When things are filmed they "flatten out" as I call it. The two dimensional view you see on your screen does not tell the story of how steep some of those sections of trail are. Chapeau!

m47h13u (Dec 6, 2018 at 18:48)
As someone who is unlucky enough to live in the lower Laurentians and their lack of good gravity trails (shout out to my buds at MSS who are trying to change things out here) I love that this spot is 4 hours away. In fact my secret trails are built with a bit of the same old school high speed tech SDM has to offer. If you’re building trails in the Laurentians please take notes, Sentiers Du Moulin is how you should go about it.

mountainbikerfisher (Dec 6, 2018 at 5:23)
Riding Quebec trails is definitely on my bucket list. Did some fall hiking in Tremblant this year and QC looks like an amazing place to ride as well.

Bobo-San (Dec 6, 2018 at 7:16)
So the story about the Triple black trail (king kong) is pretty straight forward.
they did a green and a blue trail first. then they made a more difficult trail, and made it black.
Then came a double black which was even harder.
but then King-kong was harder and gnarlier than the double-black trail, so guess what?
THEY MADE IT A TRIPLE BLACK!! which is basically a ''Red'' trail for IMBA standards.

I suppose they will update their marking eventually to match what the rest of the world is doing.

SentiersduMoulin (Dec 6, 2018 at 8:39)
Done :-)
It's a proline because of some big drop
www.trailforks.com/trails/kingkong

We don't have those special signs meaning there's big features on the trail (like in Whistler and I suppose, everywhere else on the planet?!) so adding a diamond is a way to tell people this trail might be a little bit harder than a technical double black trail without jumps and drops.

sentiersboreals (Dec 7, 2018 at 11:43)
Actually, VeloSolution Canada is mostly Trep and some guys from Gestev and works there a few weeks per year. They are not anywhere close to be the only builders that worked in MSA. Mathieu Roy, now designer/operator for Sentiers Boréals, spent 9 years as lead builder for MSA and is responsible for many volunteer-built trails in the Land. Countless other also contributed, including Pat Dorion.

jgottya1 (Dec 6, 2018 at 21:22)
Gorgeous place. Eveytime I see the headline I keep hoping I am going to see the crew announcing a rebranding and build of Balfa...

Franzzz (Dec 6, 2018 at 18:14)
@colincolin: Yes it is: Vimeo videos always works like sh*t I noticed, even at friends places with better computers and connection than mine. I love to hate Vimeo for that.

IllestT (Dec 7, 2018 at 4:48)
Yeah my connection is roughly 35mb/sec.
It's Vimeo - crap.
They invite everyone to use HD uploads, but their servers can't handle HD streaming

Other thing to consider is lag. Have you done a Speedtest.net?

IllestT (Dec 7, 2018 at 14:35)
@sentiersboreals: in a household of 5, all with internet devices, all can watch Netflix, iPlayer, YouTube etc - at the same time, without issue.
Vimeo = problems

freestyIAM (Dec 6, 2018 at 9:16)
Does anyone else have heard time understanding Canadian French? Harder than understanding Ratboy's English for me.

jlb1 (Dec 6, 2018 at 13:05)
Might be harder to understand than Ratboy's, but then we have the excuse that English is only a second language for us French Canadian

Also, if you don`t speak french properly from the start, it`s totally normal that you cannot get what they say, don`t you think so?

rilor (Dec 7, 2018 at 8:32)
In my opinion the builders of those trails might want to consider putting wire mesh on their bridges, good way to not die

sentiersboreals (Dec 7, 2018 at 11:58)
Actually, we avoid that by using rough-cut plank instead. Wire mesh have the bad tendancy to break apart over time, leaving a bunch of spikes in the air. It's also a very, very effective cheese grate if you slide on it. If we really need to add grip, we tend to use roofing singles.

SentiersduMoulin (Dec 7, 2018 at 16:41)
It is planned to install shingles this spring on some bridges.

colincolin (Dec 8, 2018 at 2:13)
@sentiersboreals: people crash very hard all the time on slippy wood. At least where I ride.

Bikejam (Dec 6, 2018 at 9:15)
Hi there! I'm testing out to make a instagram-like page on here maybe. I don't know if people will enjoy, if not, I'll just move on. However, yes, I'm trying to get attention I admit, even though you can just check out quickly, and leave a follow if you are interested in a pinkbike page. :3