I wanted to film something that, at the end of the video, makes you want to grab your bike and go ride. I am French and as riders, we always seem really keen to go and film overseas. I wanted to showcase an area close to my home that is rarely filmed.

The filmers and I headed up to Serre Chevalier with the mindset: “Let's just have fun and see if we can find somewhere cool to film”. The Serre Chevalier Bike Park is full of fun, flowy trails - perfect for riding blind whilst being chased by a drone.

One of the days we drove to Le Col d’Izoard to check out a spot. I spotted a big ridgeline and immediately thought: “I want to ride this, even if it’s not for the video! I want to go to the top of this stunning mountain.” I did exactly that. It took me an hour to carry my bike to the top of the ridge, but the view more than made up for it.

I hope you enjoy my video as much as I enjoyed making it. 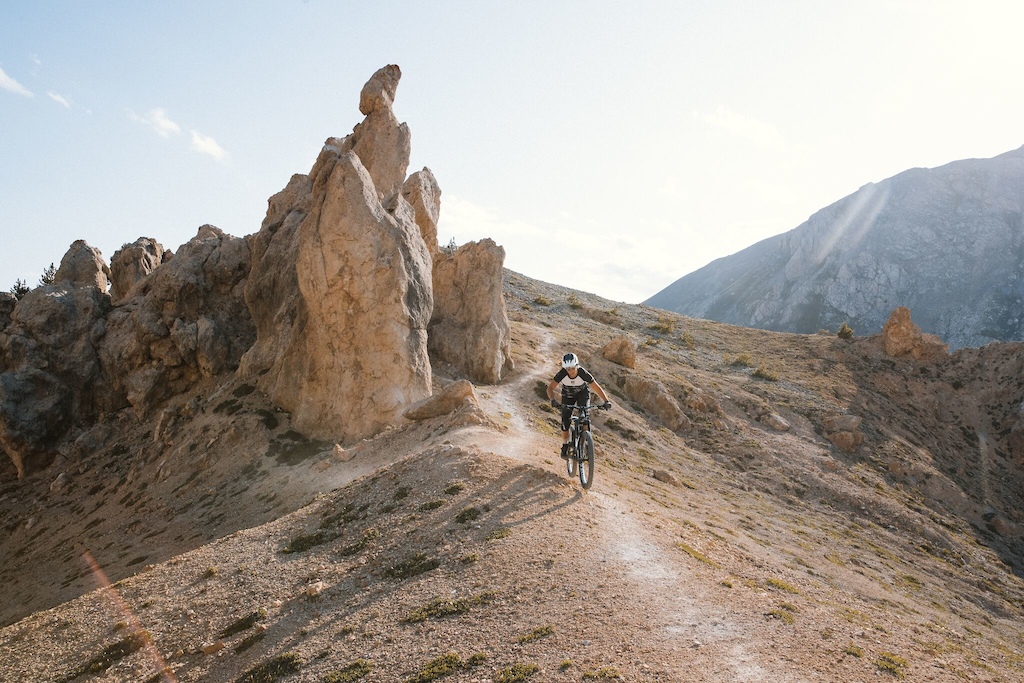 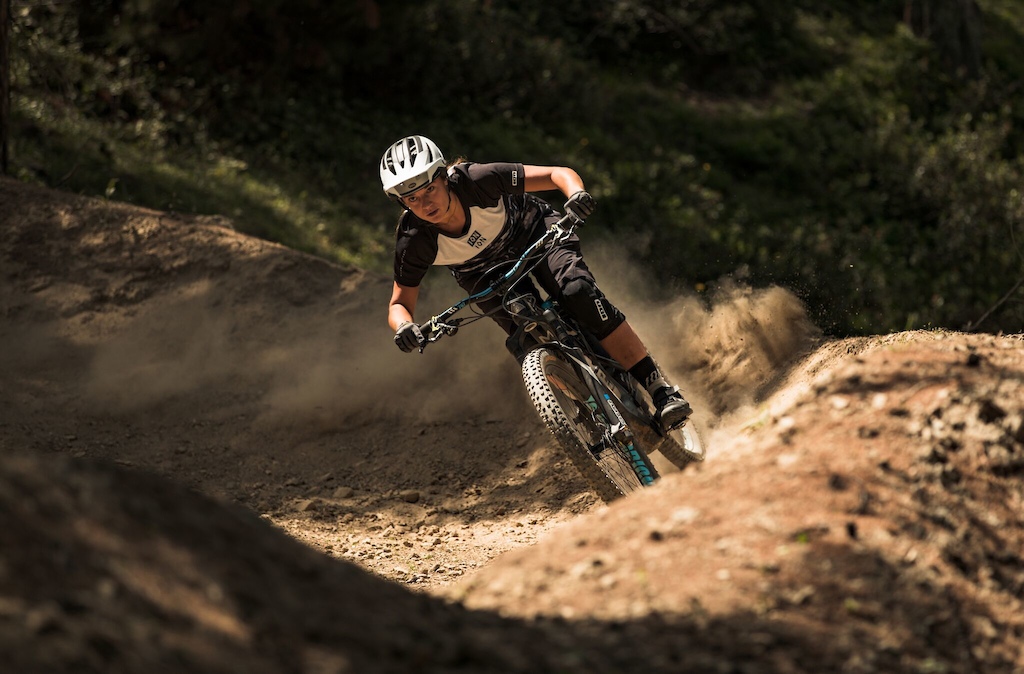 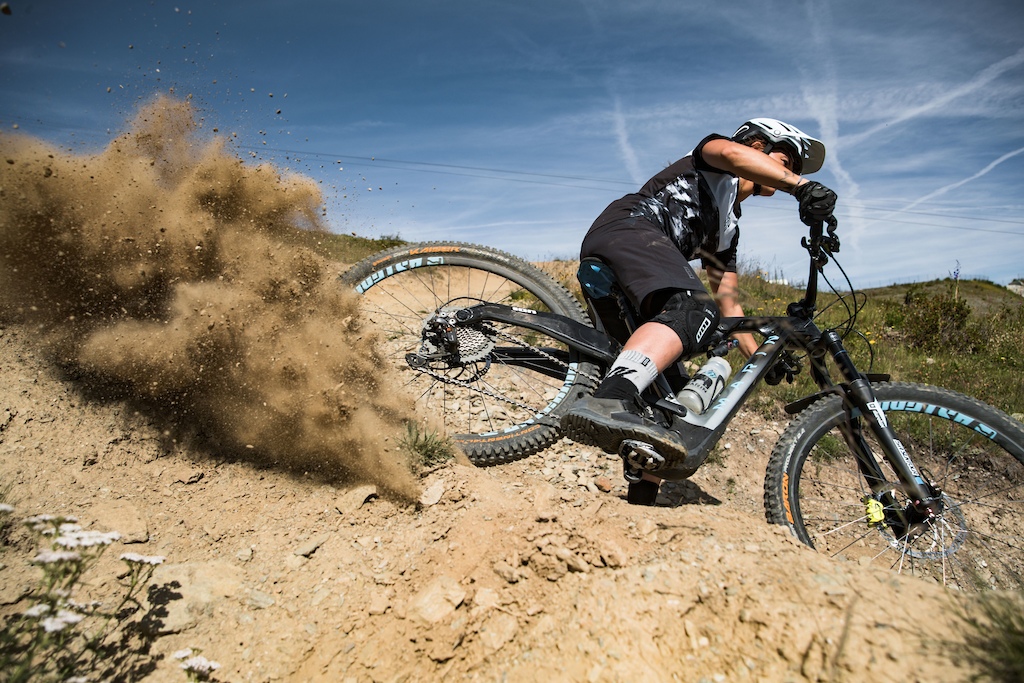 jeroenk (Nov 2, 2019 at 2:13)
Just don't tell anyone ;-). Briancon is a beautiful place to ride and the Col de Lautaret mountain pass does a good job of keeping the big numbers of tourists in the Alpe d'Huez / Les Deux Alpes area.

iamamodel (Nov 3, 2019 at 18:54)
@hpman83: I was walking past the little school in La Grave and said hello (in French) to them and they all started teasing me in this weird mock-English gibberish, making these weird round vowel sounds,riding tricycles and wearing sunglasses. It was hilarious and one of my best memories of my trip. Next time I will ride and not just eat there.

Jaybirdy (Nov 2, 2019 at 1:46)
Think that her riding & the overall video was really impressive..More so than feeling the need to comment about a riders cuteness appeals, which then in turn makes you beg to ask the question if you should be then be considered a pig after doing so.. hmm?

Woody25 (Nov 2, 2019 at 5:36)
My rule of thumb, if I'd been at the screening of that video and Morgane and the film crew were there, would my first comment to her, the team and everyone else in the room be "you're cute", or would it be about the content of the film. I then try and take that same approach when commenting online.

rrolly (Nov 4, 2019 at 6:36)
@Woody25: I find this very interesting (actually. I'm not trying to stir the pot). Would it be considered appropriate to say both? Would it be deemed offensive for a female fan to say it to a male rider? Is it the term "cute"?

IMO, it's not offensive (and nobody's gonna flip their sh*t over it) - it's just kind of juvenile and says more about the person making the comment than the one on the receiving end...

rrolly (Nov 4, 2019 at 20:23)
@speedfreek: I get what you're saying, but what if we compare this to bikes (again, not trying to stir things up, just trying to dig for understanding). People often talk about a bike's looks. This has almost nothing to do with how the bike rides; yet, most people find this acceptable, and for the most part not juvenile, no?

Woody25 (Nov 5, 2019 at 1:28)
@rrolly, for me it's about context. If Morgane was a friend of yours and she put a picture of herself on her personal social in a dress, dressed up for a night out saying "loving my new outfit!" then "you look so cute" is a perfectly normal response and "you're cute" is probably flirting. The appropriateness of the latter would depend on your personal relationship and history with her.

But this is effectively her workplace, in that video she's at work doing her job. Commenting on just on her appearance (or even on her skills and her appearance) it can sound like failing to recognise her competence at her job (riding and film-making) in favour of just thinking about her appearance. Obviously women have a long history of having their competence ignored in favour of sexual objectification in the workplace, and the media in general, so commenting about appearance on a video about riding could be seen as perpetuating that.

Micayla Gatto touches on that side of things a lot when she talks about sponsors wanting her to dress in a bikini to promote bike parts at sixteen years old in Ferda Girls.

I agree with @speedfreek, essentially it's really just not relevant to the video.

With regards to the talking about a bike's vs a person's looks; To me that's different, a bike is an inanimate object that people made a decision to look a certain way. In other words commenting on its appearance is commenting on a group of people's competence in a professional situation, so that makes complete sense when commenting on say a bike release video, they are expressly saying "here's our new ride, what do you all think?" so are asking for appearance related comments.

When bikes are featured on PB it’s because the bike is being pitched for your consumption (ie. gimme your money in exchange for this thing)
In this case, aesthetics can be important as you’re potentially looking at making a purchase and looks might matter to you. That’s totally fair - we’re talking about an inanimate object, not a human being.

Here, however, Morgane is not putting this out as an advert for herself personally. Rather, it’s a showcase for her riding ability as well as a form of advertising for her sponsors. It’s the bike, the location, the kit and the riding which are up for discussion.

I’d try to think of it this way: If I were a good looking person (I mean, I am, but this isn’t about me) and I put in a bunch of time and effort to make a film showcasing my talents and an extraordinary environment, and the first compliment I received was “you’re cute” my reaction would probably be along the lines of “oh... umm, thanks I guess. Any thoughts on the film?”

To comment purely on her appearance seems like an unfiltered, gut reaction that you’d expect from a teenage boy whose actions are determined by the constant rush of uncontrollable hormones they get (I speak from experience as I was a teenager once...)
I sort of feel it demerits the talent and the effort made by the creator and values them purely on their aesthetic, which is kinda poor IMO

Anyway, in answer to the OP here: No, I don’t think it makes you a pig. It just seems a bit unnecessary.

But whatever, that’s just my opinion...

Anyone else have something to add?

speedfreek (Nov 5, 2019 at 6:29)
@Woody25: well I clearly didn’t read your reply before I wrote my last one - it’s fundamentally the same points. Sorry for gilding the lily!

Yep, I think you’re dead on there.

speedfreek (Nov 5, 2019 at 6:38)
@rrolly: yeah, I saw a bit further up in the comments that her dad was on here. You’re right in that it would be interesting to hear his perspective, as well as Morgane’s, but then I doubt either of them really give a damn what a bunch of bike nerds on the internet have to say on the matter...

quite right too.
If I were them I’d probably rather talk about the film, TBH

LofM (Nov 5, 2019 at 23:00)
@speedfreek: as we are french .... nothing is an appropriate , she is a girl ,she ride , she is adult , she don't mind about being juge as that , as her father i'm proud of who she is and want to project .... she can be a pretty good rider , win races all year long , have big fun with her friends , love beach in summer and skiing in winter . In france we keep very good relation ship between male and female .... and most of french girl are very happy to be seen as "cute" , pretty ..... even if they are too damn good rider !

yonibois (Nov 2, 2019 at 12:01)
How about if your wife watched a vid of Bruni shredding and then said, "He's hot." would that be OK?
If the answer is 'yeah' you're in the clear, but it does suggest that you know little about biking and care less.