This impressive jump line resides on the outer edge of Palmerston North, New Zealand, just down the road from Arapuke Mountain Bike Park. Brad Nieuwkoop (Trail Tuned Ltd) has decided to use his land to give something back to the community, in the form of a place to come and train, learn to hit big jumps, and allow riders to progress.

At the end of last month, I headed up to attend the opening jam with the help of Myride Wellington. It was the first time a lot of the jumps had been ridden, with a windy forecast, and a fair bit of water on the ground it looked to be an interesting weekend.

I can't say enough good things about how the weekend was run by Trail Tuned and everyone else involved. On arrival we signed in, were given packed lunches for the day and headed down the valley for track walk. Riders of every skill level were welcomed with open arms, and only had to earn their keep with a couple of hours of digging. With future plans to build accommodation and facilities, Brad has made it very clear that he wants this place to be available to everyone.

The first big jam session is hopefully going to be after Crankworx Rotorua in 2021. 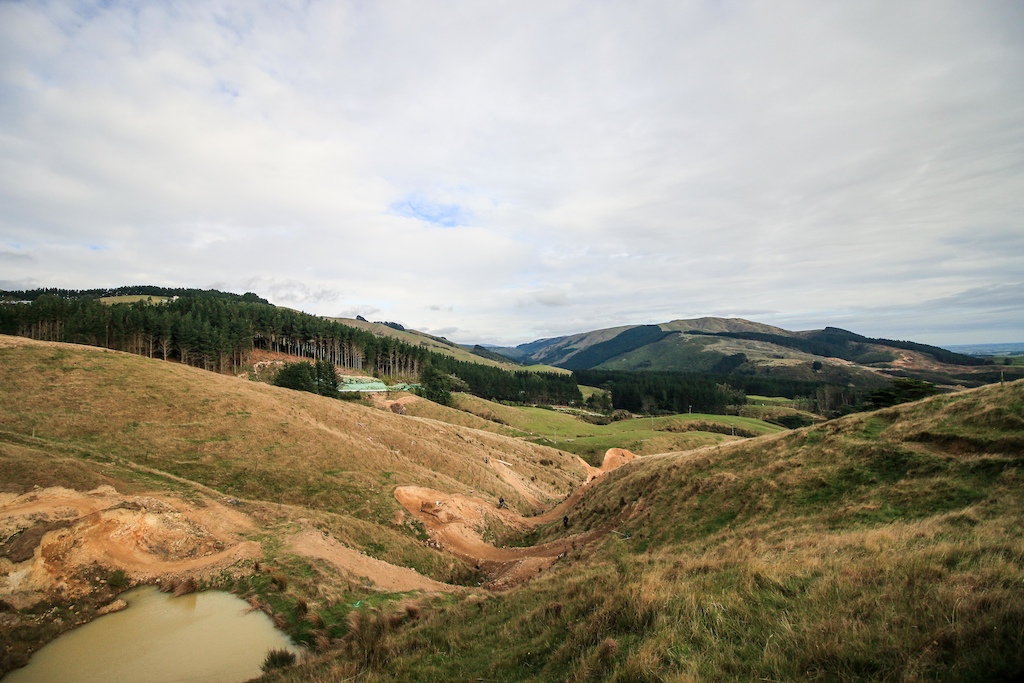 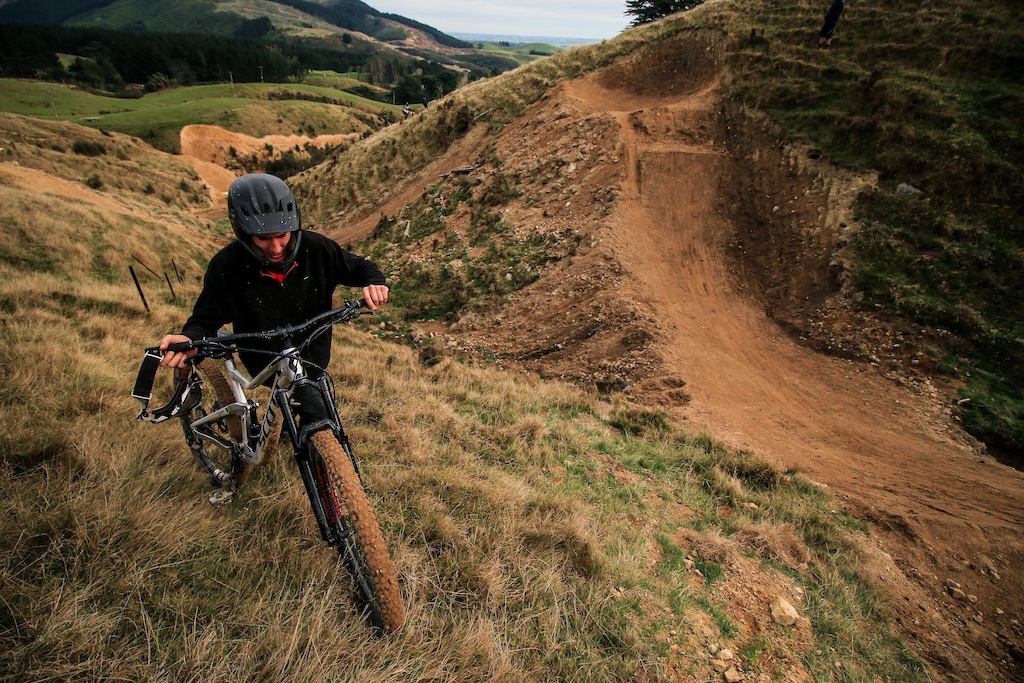 With strong winds coming through, some areas were tough to ride. Photos by Elizabeth Cocks.
After track walk, all the riders grabbed tools and headed out to dig. Paul Needham, the track designer at Greens Estate, facilitated the trail work by dividing people up into different digging crews and sending them to different sections of the track. A lot was achieved in the short couple of hours before the first ride and it was rewarding to see the first wheels hit the ground. 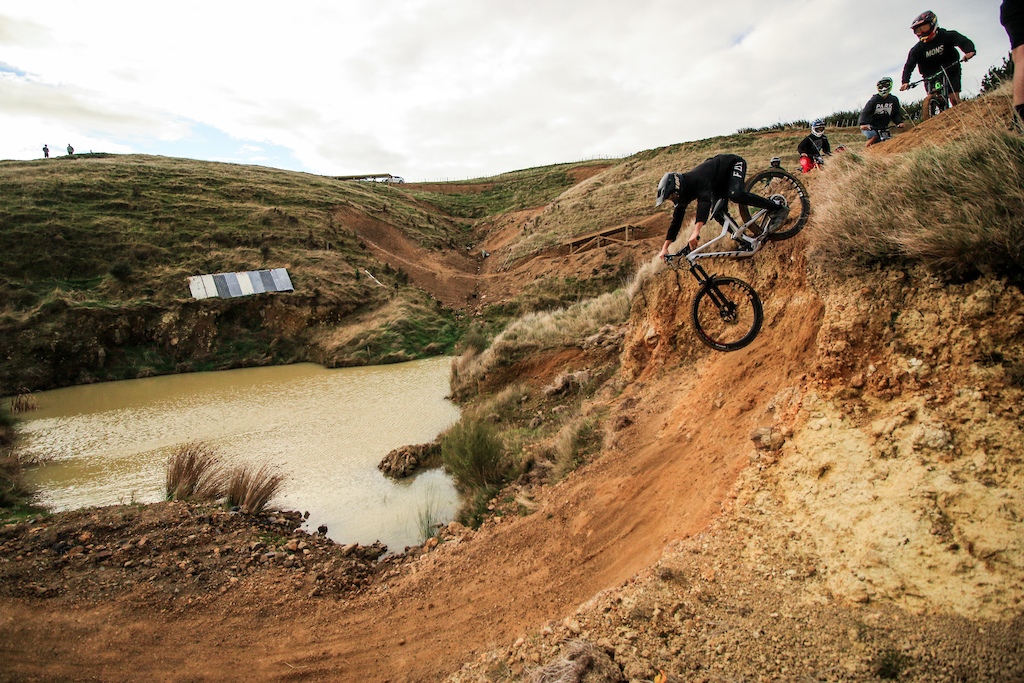 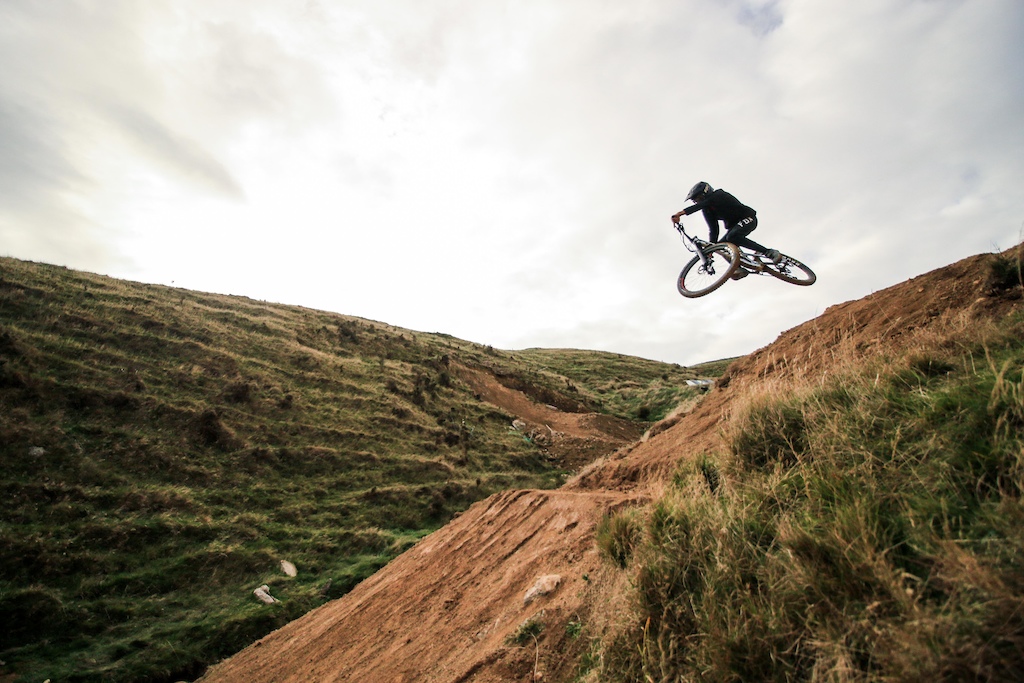 The features start off small and progressively become larger. everything has a B-line to help riders get their confidence up. Photos by Elizabeth Cocks.
By the time you get to the rock drop/step down, things really start to heat up. This monster feature is only a setup for the main attraction - a 50ft jump, with possibly the largest landing I have ever seen (to be fair I found myself saying that about all the features here). 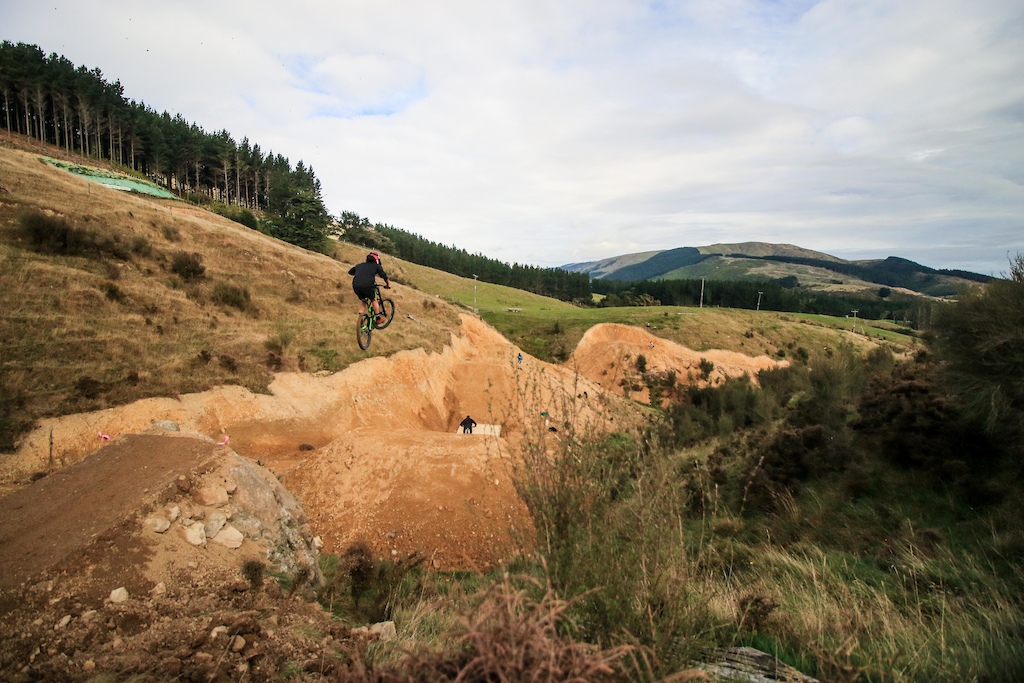 Matt Cocks heading into the biggest jump of the trail. Photo by Elizabeth Cocks 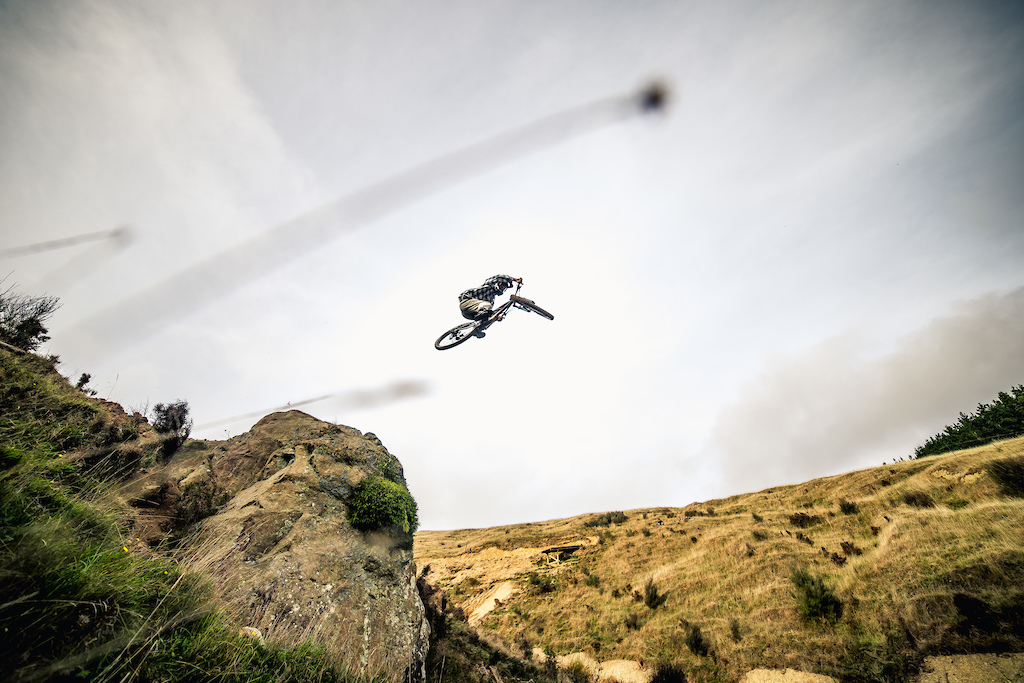 When Brad and Paul first spotted this rock in the natural landscape, they knew it would be a feature. Photo by Alex Davenport
The big double proved to be a problem for some, but considering how fresh the jumps are, it really is a testament to Paul's trail design that they were running so well.

Once Jesse Cseh got over the jump it opened it up to the rest of the field. Pretty soon there was a proper session on it, showing how incredible this line will be in summer.

After a full day of attempting the big features, the riders headed up to session some smaller sections. As seen in the video, people started throwing a few tricks and definitely made plans for tricks when the trail runs faster in summer.

Currently the trail ends at the end of the valley and riders would cruise out and catch a shuttle back to the top, that is obviously not the end of Brad and Paul's plans. The final section is looking to be much more slope style oriented, with big, trickable features. There will be other lines, alternate features and even bigger jumps in the near future. I also heard talk of some training features such as airbags or mulch jumps. There is so much land to work with here, and such a dedicated crew to do it. 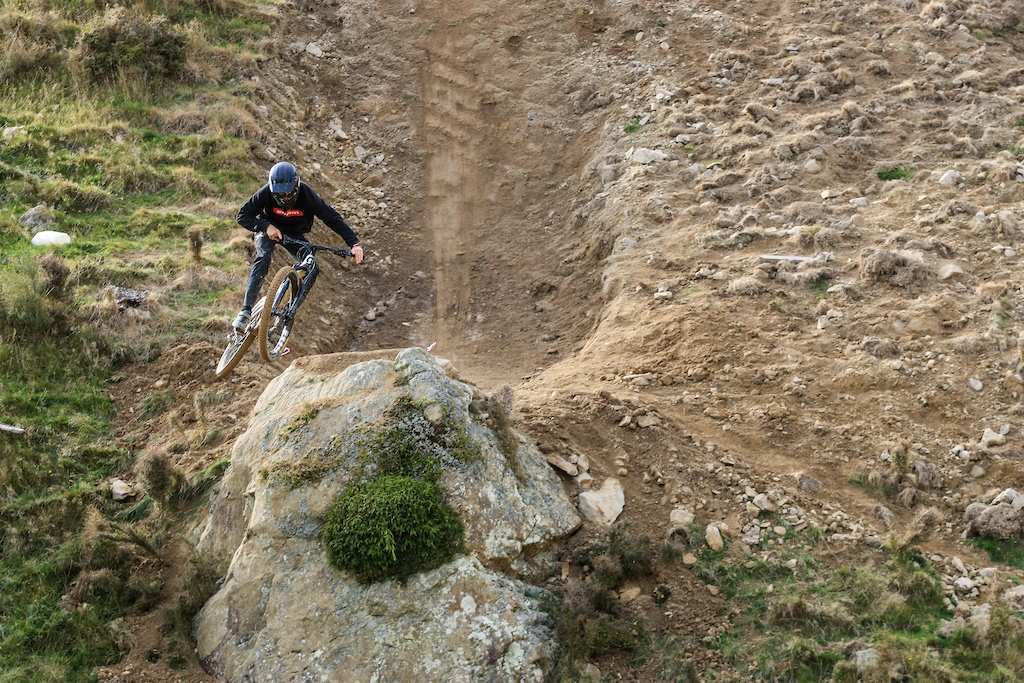 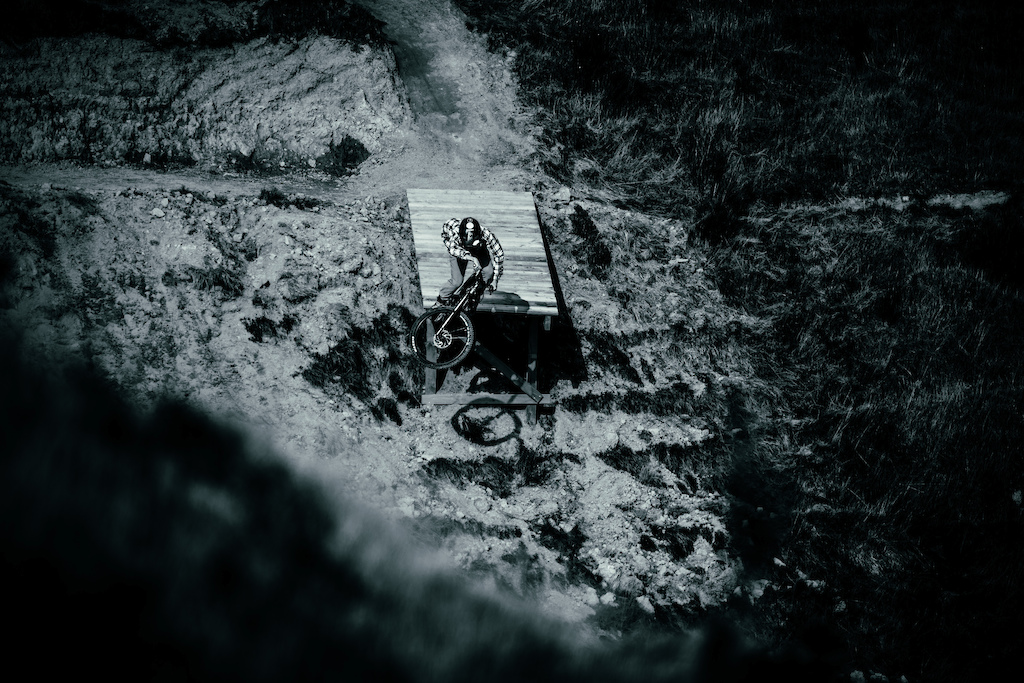 This downward sloped takeoff is not easy to scrub off. Photo by Alex Davenport. 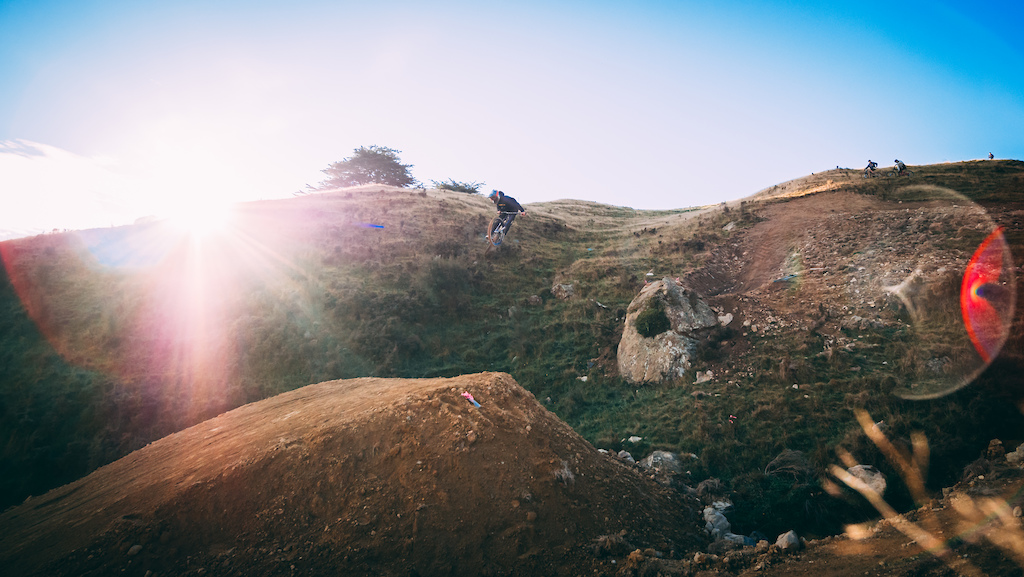 Blake Rountree putting some signature style on the rock gap, before wrecking his front wheel. Photo by Finn Lloyd 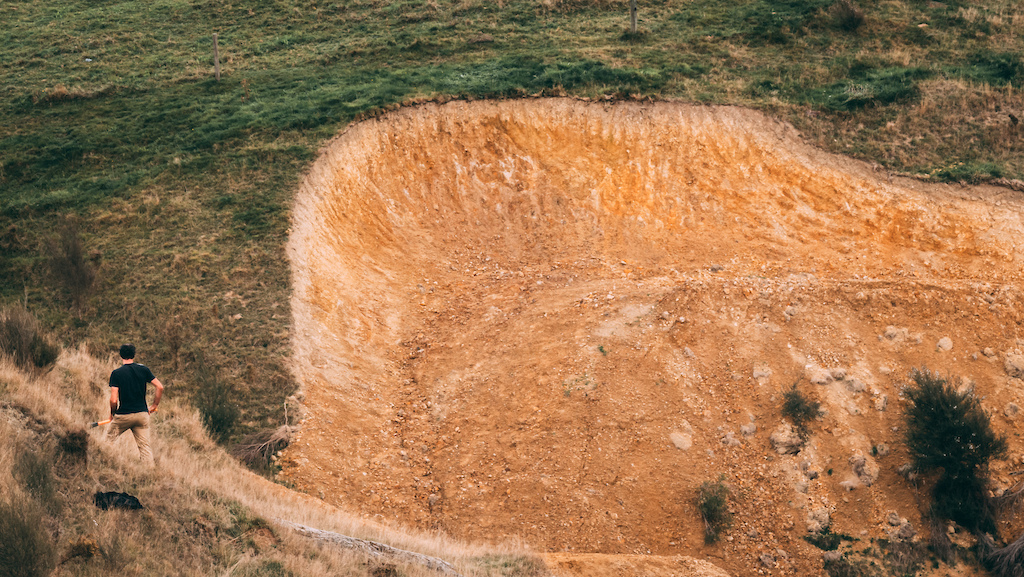 Paul Needham working on the hill above his insane creation. This berm is near vertical. Photo by Finn Lloyd 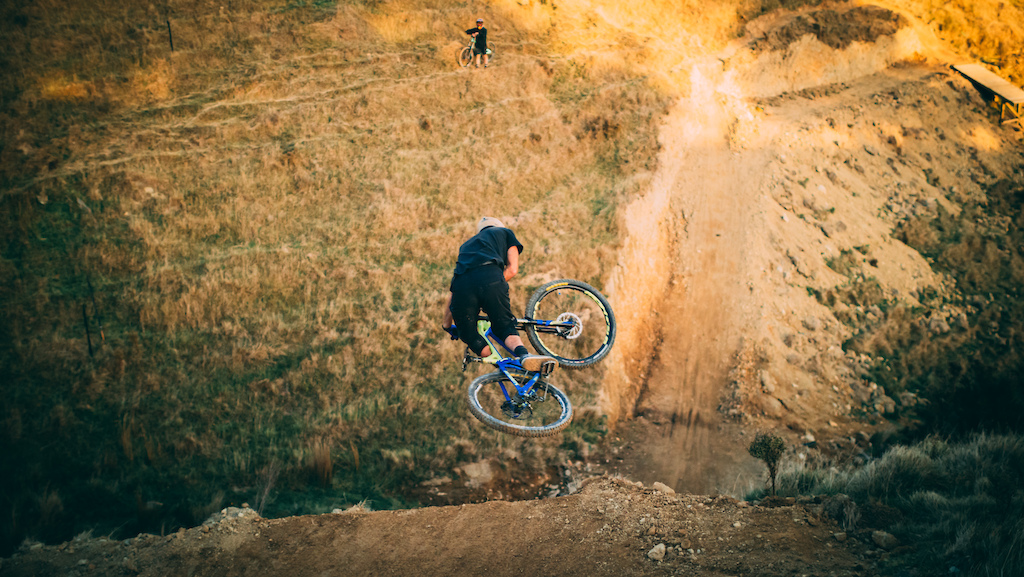 Paul Needham is the track designer and he sure knows how to ride it. Photo by Finn Lloyd
Greens Estate will quite clearly play a huge role in the development of riders in New Zealand. Their design motto is "Big but Safe" in order to help people grow into such large features. I am proud to be involved at such an early stage, and hope to see many people out here riding in the next few years.

A massive thanks to these guys for their hard work on the trail. 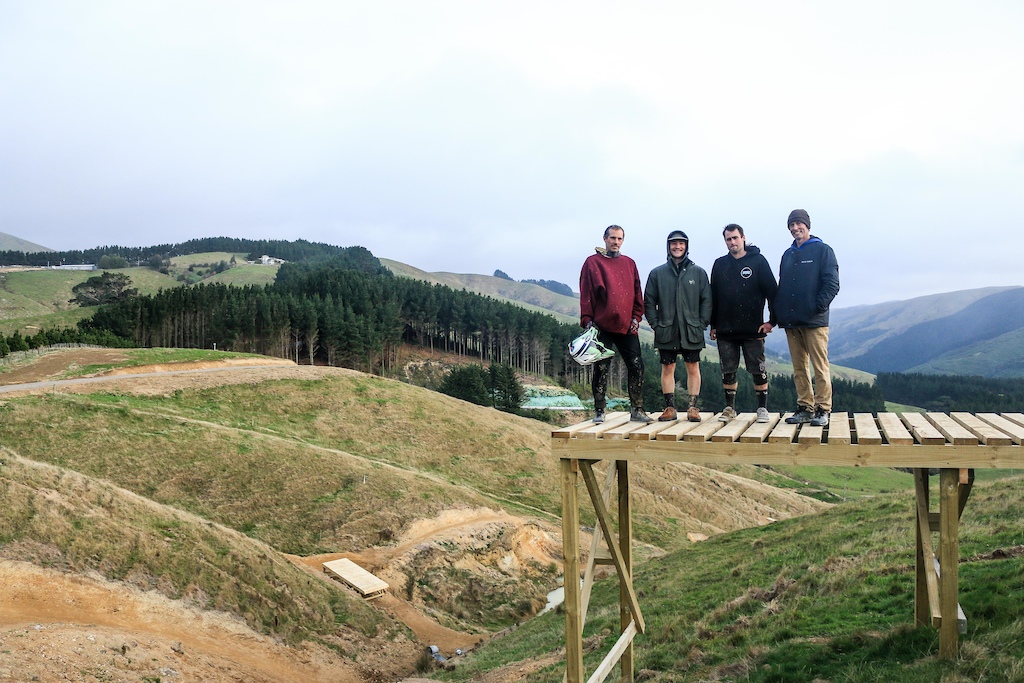 From left to right, Paul Needham, Matt Cocks, Tom Humphries and Brad Nieuwkoop. Photo by Elizabeth Cocks.
Follow Trail Tuned on Facebook for updates on future events.
There will be many more films to come out of this place, so keep an eye out for them.

Words and Video by Finn Lloyd

COVID-19 Disclaimer: Trail Tuned were very responsible in obeying all guidelines put in place by the New Zealand government to ensure a safe operation over the weekend. We are very fortunate to be in a position to do something like this, safely, at this time. I hope we can all be riding together again soon (once it's safe to do so).

ncrider5 (Jun 9, 2020 at 6:39)
Awesome guys. There is nothing better than building a whole line as a crew, and then hyping each other up to hit it for the first time. That's what mountain biking is all about.

enduroNZ (Jun 9, 2020 at 16:26)
Sick this is about an hour and a half up the road From me, you also have dirtfarm around there too some very decent riding all round

x-rider (Jun 9, 2020 at 7:58)
I wish this would have been around when I was in NZ ...
Hey @mikelevi could you include a link where I can download my permanent residency form and print it by myself... Kiwi nation looks like the place to grow up and we are boys so we never grow up...