There’s an honesty in numbers, and the stopwatch never lies. We’ve put thousands of hours into the design, testing, and construction of our products to shave precious seconds where it matters most. From the top of the track, to the top of the podium, our commitment to excellence shines with every compression. We’ve run the numbers, now it’s your turn.

And now for a bit of Fox Factory history...

A physicist by training, Bob Fox was an avid inventor and motocross rider in his spare time. He started racing using his own motocross suspension designs in 1974, and just one year later, he and brother Geoff marketed an air shock absorber designed specifically for professional motocross racing. 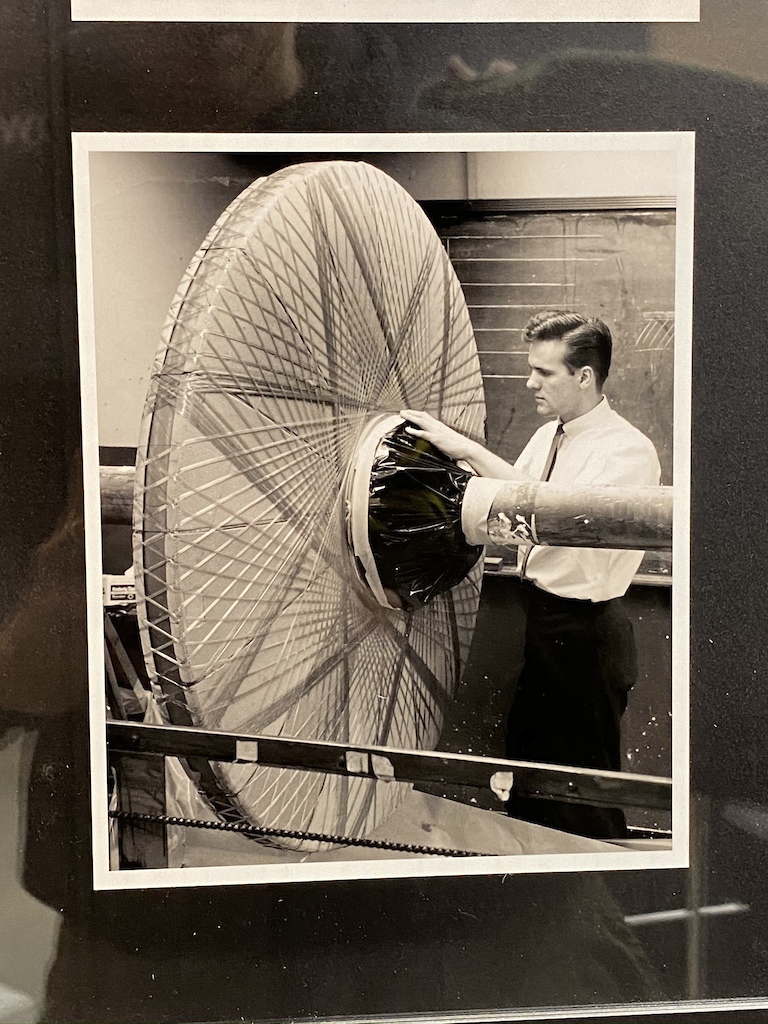 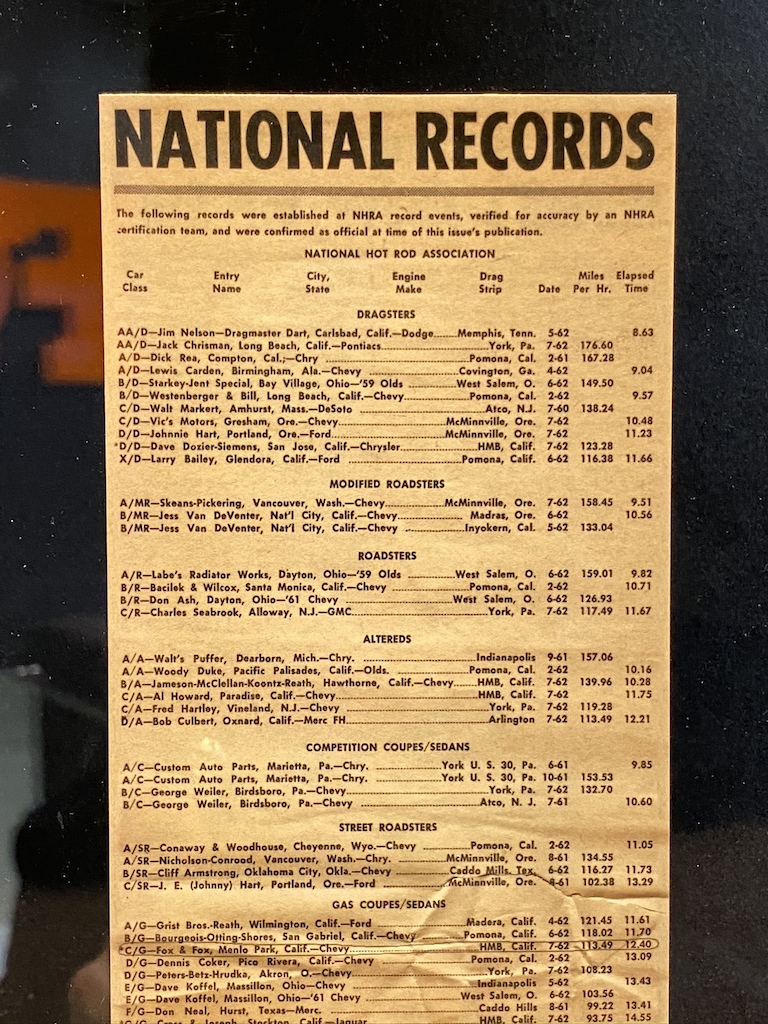 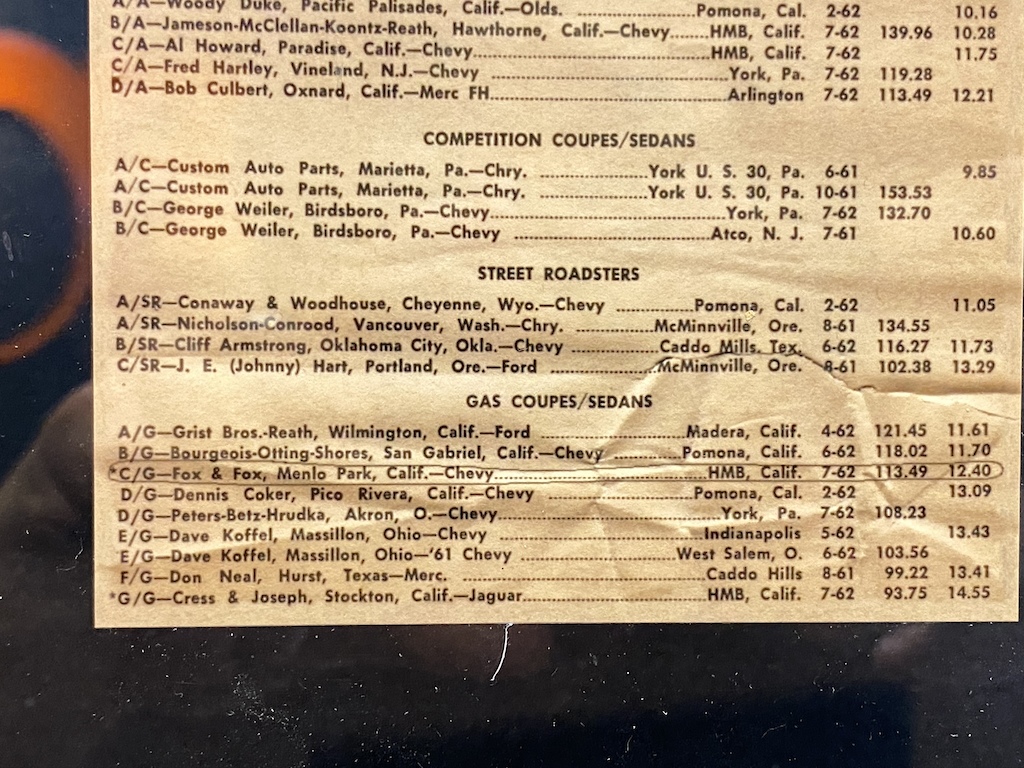 In the 1980s, FOX expanded into the Indy car, off-road truck, quad, dune buggy and snowmobile markets, building an enviable reputation as a producer of high-quality, high-performance suspension components. 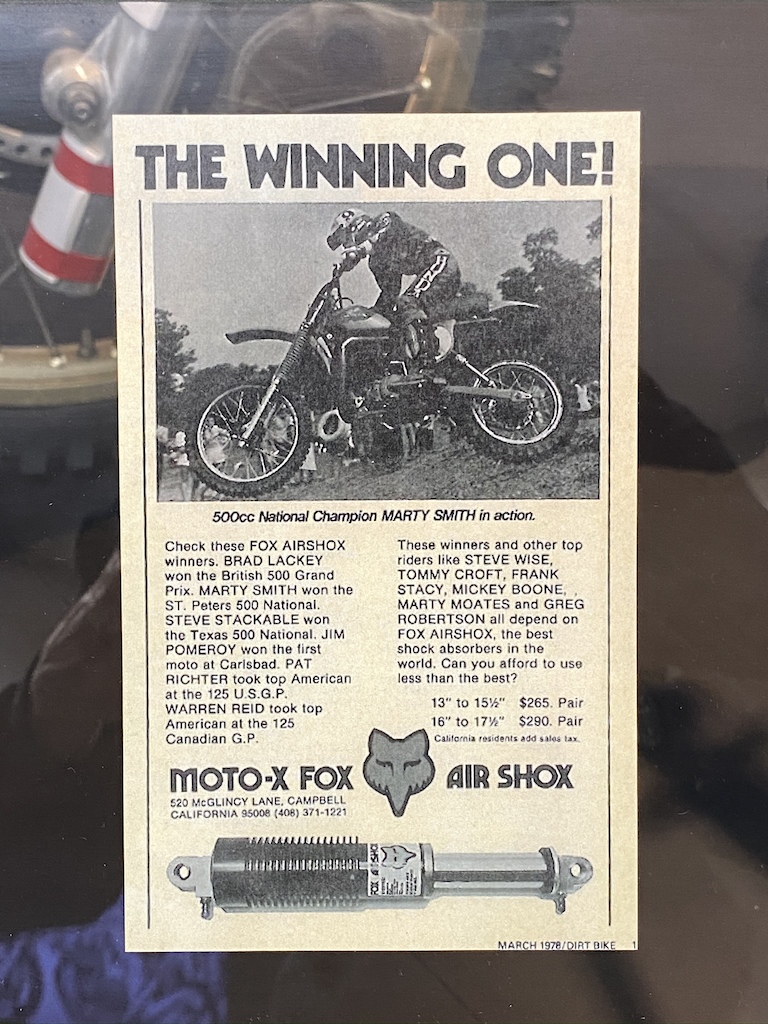 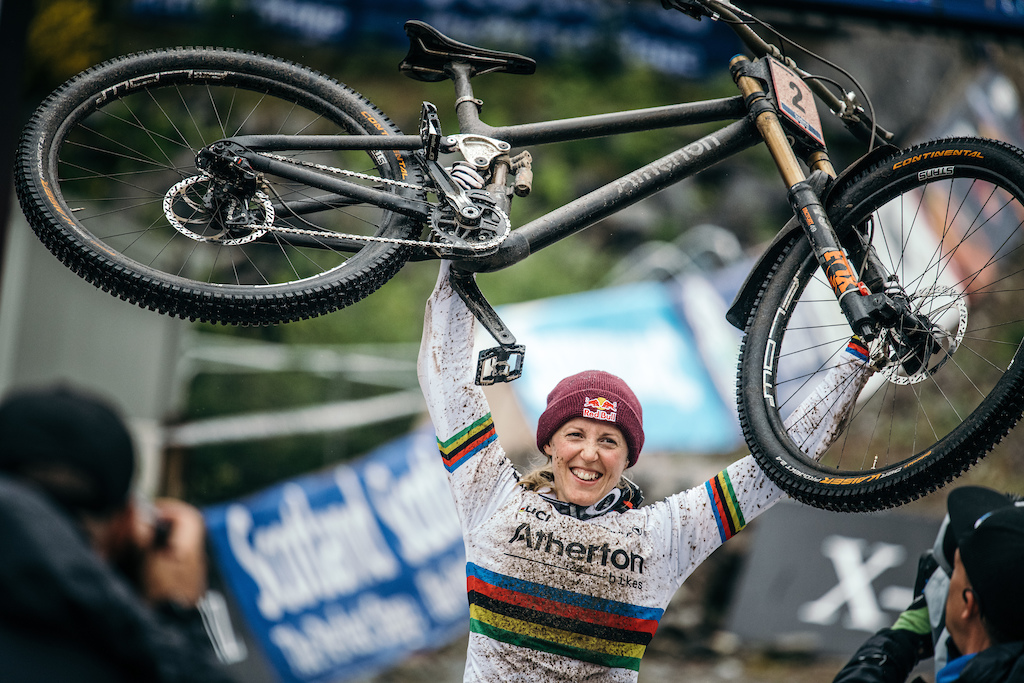 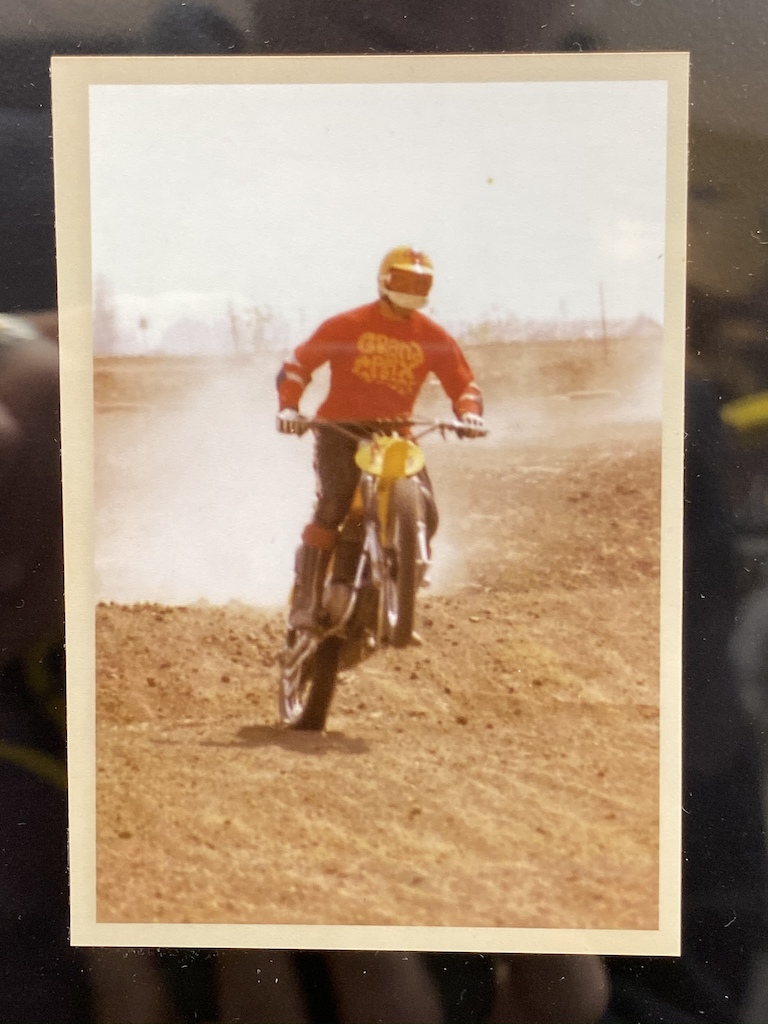 Bob Fox was inducted into the AMA Motorcycle Hall of Fame in 2009, and retired from the FOX Factory board of directors in August 2018.

Tweet
Must Read This Week
Interview: Trek's Travis Brown On Experimenting With 32" & 36" Wheels
85821 views
First Ride: Cannondale's All-New Scalpel SE
72315 views
Ridden & Rated: 4 of the Best eMTB Motor Systems for 2020 - Bosch vs Brose vs Shimano vs Fazua
61423 views
Pinkbike Poll: If You Had to Ride One Bike for the Rest of Your Life, What Would It Be?
53389 views
Video: Conflict Arises Between 17 Year Old UK Rider & Apparent "Trail Saboteurs"
52211 views
First Look: ShockTune is a Free Suspension Setup App
46503 views
Video: Claudio Caluori Tries to Keep up With Nino Schurter on his Home Trails
45396 views
Bike Check: Ben Cathro's Santa Cruz V10
35543 views

alwaysOTB (Apr 12, 2020 at 10:36)
This article got me curious and I learned that Fox apparel was started by the brother Geoff. I never understood why these two companies never sued each other for trade mark infringement.

Jordansemailaddress (Apr 12, 2020 at 16:02)
I always just presumed it was two divisions of the same company, like Burton Snowboards and their apparel line.

jamesdunford (Apr 12, 2020 at 23:39)
@scottlink: I'm fairly certain the two brothers ended up hating each other, but would need to triple check that.

ibishreddin (Apr 12, 2020 at 10:42)
Imagine when this all blows over how many people will be riding, eating out, drinking having a good time. It will be glorious and a moment the world will remember.

RoadStain (Apr 12, 2020 at 13:36) (Below Threshold)
Not here....too many fucktards starting fights on Facebook that will stand the test of time. I do not have FB but read enough comments to know there are a few people I would not help out of a ditch.

RoadStain (Apr 12, 2020 at 15:40)
Oh, but in reality that is a carbon fiber Loom. It would be used to weave carbon fiber into a tube structure impregnated with resin and then formed into the shape desired.

mtbikemccoy (Apr 12, 2020 at 21:49)
YES!!! When we can all resume life it'll be a massive breath of fresh air. I already approved my wife's idea to ride XC topless in celebration of freedom! She hasn't given me permission to ride balls-out, yet....Soon!... It's going to be incredible.

Sucks for RoadStain... Looks like he/she will apparently be fighting people on Facebook eternally, and my wife has awesome tits!

schulte1400 (Apr 13, 2020 at 0:07)
Out here, this is the busiest the trails have ever been. The number of bikers is about the same but the number of hikers is staggering! Everyone’s trying to get outdoors responsibly and it’s a pretty awesome sight to see!

I got screwed into looking by a "friend". Now, I remember why I dont have Facebook and why the site is blocked at all facilities.

ChazzMichaelMichaels (Apr 12, 2020 at 15:44)
I'd love to see a DH racer survey similar to what they do in professional golf. They ask the golfers anonymously which equipment they would use if they weren't contracted. Nearly all of them name a brand of iron that you barely see on Tour, Mizuno. How many pro DHers would use another fork, shock, tire etc, if they could choose whatever they like?

zyoungson (Apr 12, 2020 at 18:35)
A few riders have mentioned how they were happy to return to using fox products from riding other brands, from memory brendog & recently Greg Wiliamson.

WRCDH (Apr 12, 2020 at 12:48)
What’s that giant Tioga tension disk thing in the first picture? It’s definitely a composite filament-winding setup — appears to be Kevlar, fiberglass, UHMWPE, or some hybrid yarn or other yarn, wet out with a liquid resin (per the protective plastic on the “hub” mount). Also appears to be a removable winding mandrel inside. Maybe a Baja Monster Truck tension disk wheel? =P

RoadStain (Apr 12, 2020 at 15:41)
Oh, but in reality that is a carbon fiber Loom. It would be used to weave carbon fiber into a tube structure impregnated with resin and then formed into the shape desired.

WRCDH (Apr 12, 2020 at 20:35)
@RoadStain: Cool video! My colleagues at Toyota / Lexus in Japan came up with that for the Lexus LFA carbon fiber A-pillars. And the company I worked for at the time sold Lexus materials for their RTM & infusion processes for the LFA tub and structures.

I did McLaren’s carbon fiber “Monocell” tub / chassis prototyping on a similar braiding machine, just bigger, and vertically oriented. The one in the Fox picture is a filament winder though — essentially a lathe (with winding mandrel attached) and a computerized traversing feed of fibers is wound onto the “spindle” / mandrel / tool...so the tool / mandrel rotates and has a single bundle of fibers wound on it. But with braiding, often 72 to 144 bobbins of fiber are rotated around a mandrel / tool that’s fed through the braiding machine (like in the video). Lots and lots of setup time to spool-up and reload the 72-144 relatively small bobbins on braiding machines like Lexus used, and like I used for McLaren. So we switched to a non-braiding process for production.

rivercitycycles Plus (Apr 12, 2020 at 22:50)
@OceanPhil That maybe so but Steve Simons had his hands in both companies.

Jordansemailaddress (Apr 12, 2020 at 16:12)
Designing suspension and lifting cars? I guess that’s one way of figuring out what kind of load the suspension will need to carry.

vinay (Apr 13, 2020 at 5:10)
@CrispyNuggs: Imagine back when he started out in DH racing, that someone would predict some of the top riders would be running Tektro brakes and Suntour suspension. Yet here we are. I can imagine if RST wants to be competitive in WC racing, they probably can.

CrispyNuggs (Apr 13, 2020 at 17:04)
Yeah true I remember the usd USA made fork they did late nineties think rob warner rode one briefly @vinay:
Post a Comment