America’s Old West – just the name of the place stirs thoughts of romantic expanses of un-tamed land and untapped opportunity made famous in old-timey Hollywood.

The imagery etched in our collective psyches of what the American West is – the long-forgotten towns that shriveled away after industry and fortune absconded with the American Dream - has its roots in the Mojave Desert.

This place has a weight to it. A gravity steeped in ancient indigenous cultures who lived off this land for centuries before European settlers arrived, and whose spiritual presence can still be felt to those who seek it. 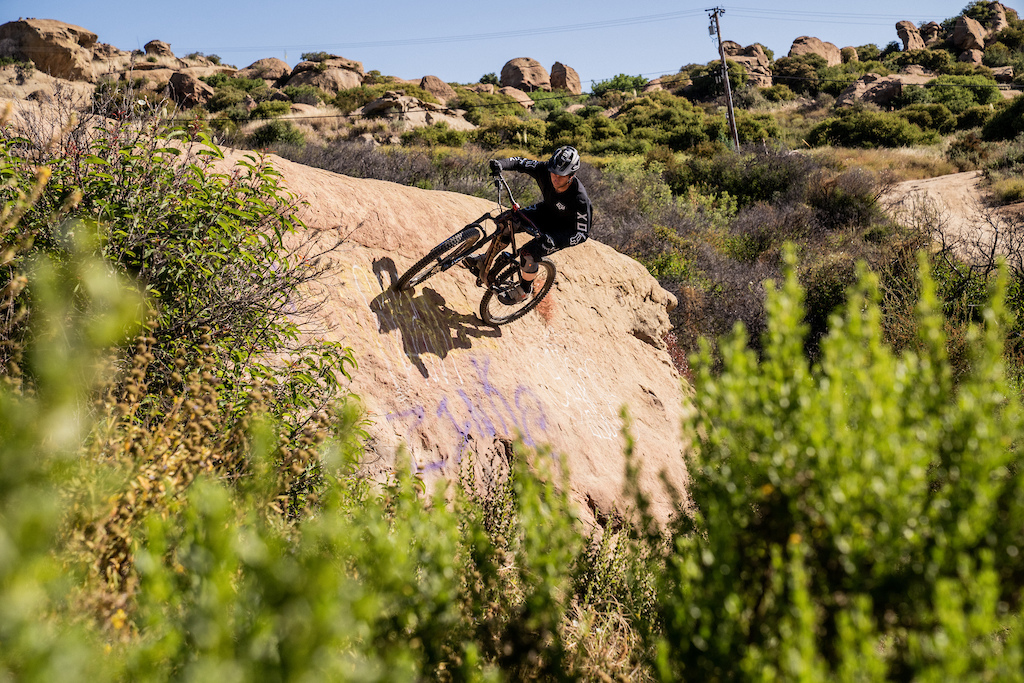 There is also, even today, the feeling of undiscovered territory in the Mojave Desert – like you’re the first person to ever walk this rugged land. And then, you crest the hill in front of you and see the indelible presence of modern life – but it somehow still feels like you’re a trailblazer. Like the abandoned towns, wind farms and industrial graveyards naturally evolved in this otherworldly place – like detritus scattered about by millennia of volcanic activity and the endless flow of the Colorado River.

When this infinite landscape is right next door, and some of the most famous dedicated riding spots in the mountain biking world just a short drive away, it took Woodward West MTB Program Director Jake Kinney a long time to see the riding possibilities within a stone’s throw of his Tehachapi, CA home. 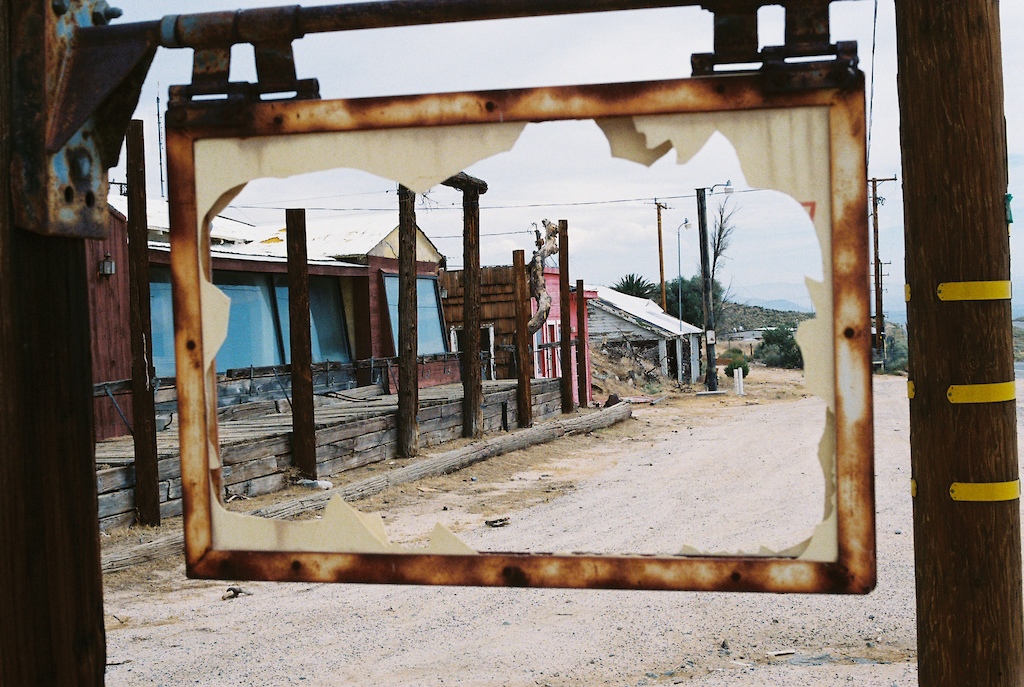 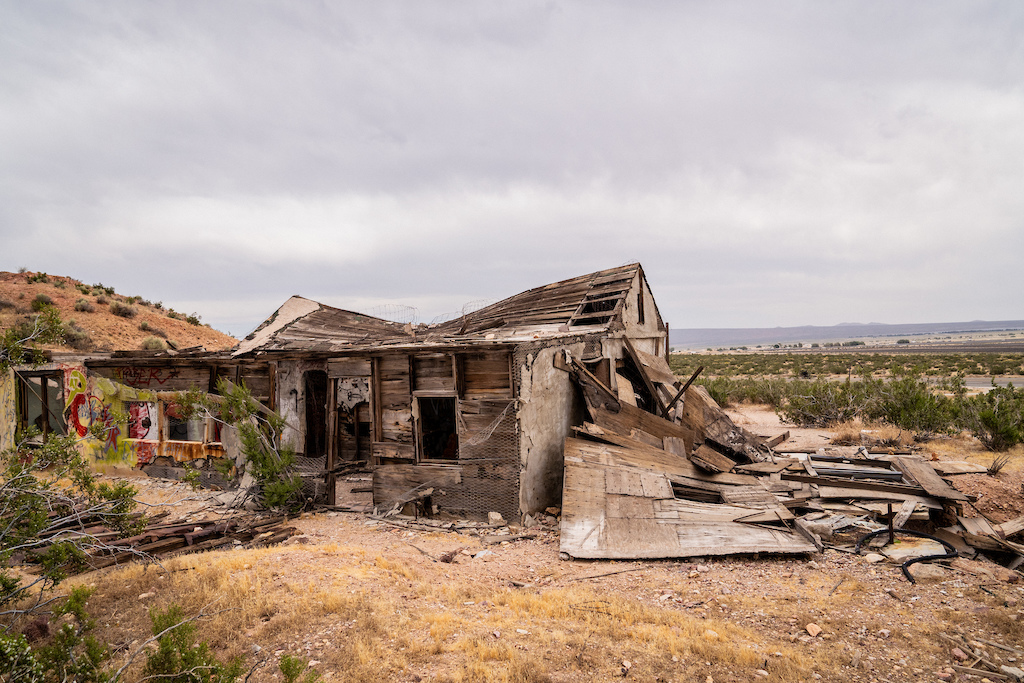 “We ride motorcycles up there a lot, and I was up there at one point and thought ‘How sick would this be on a bike?’” he said. “We’re really close to Mammoth and Big Bear, so the locals never really think about riding up there, so this is the first time mountain bikes have ever been on these trails.”

It can be hard to believe, for anyone who doesn’t live in the area, that a landscape so isolated and desolate lies just 45 minutes from his front door – and, somehow, this is the first time anyone has thought to bring a bike. There were no re-shoots, or sessioning a line to get it “just right”.

“Every part of the film is the first take. So, literally, the movie is showing the first time a trail has ever been ridden. It’s pretty cool.” 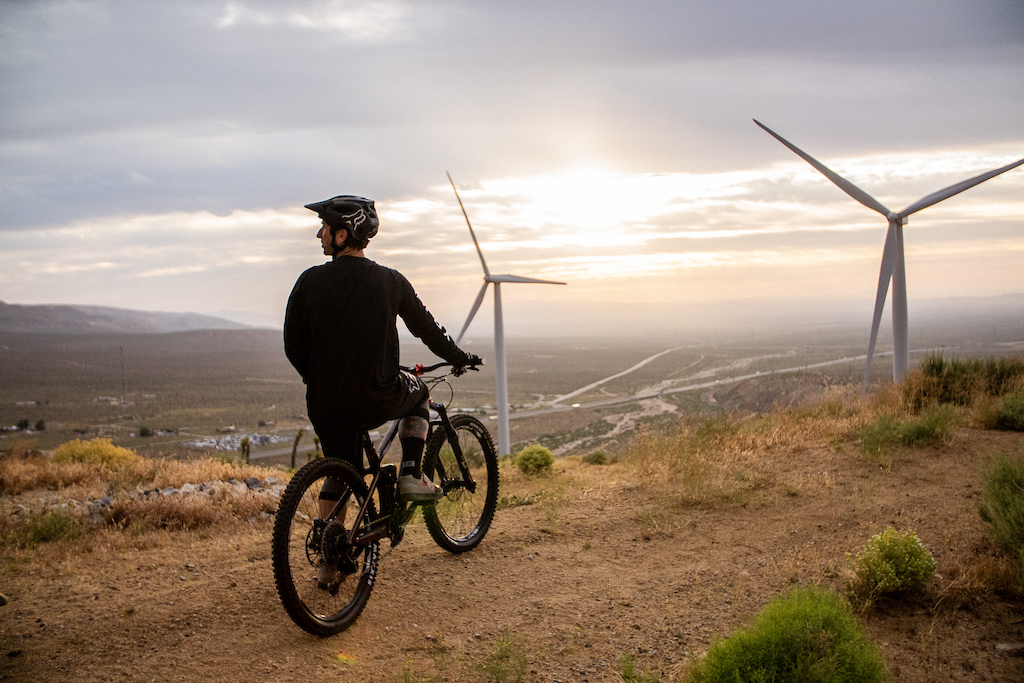 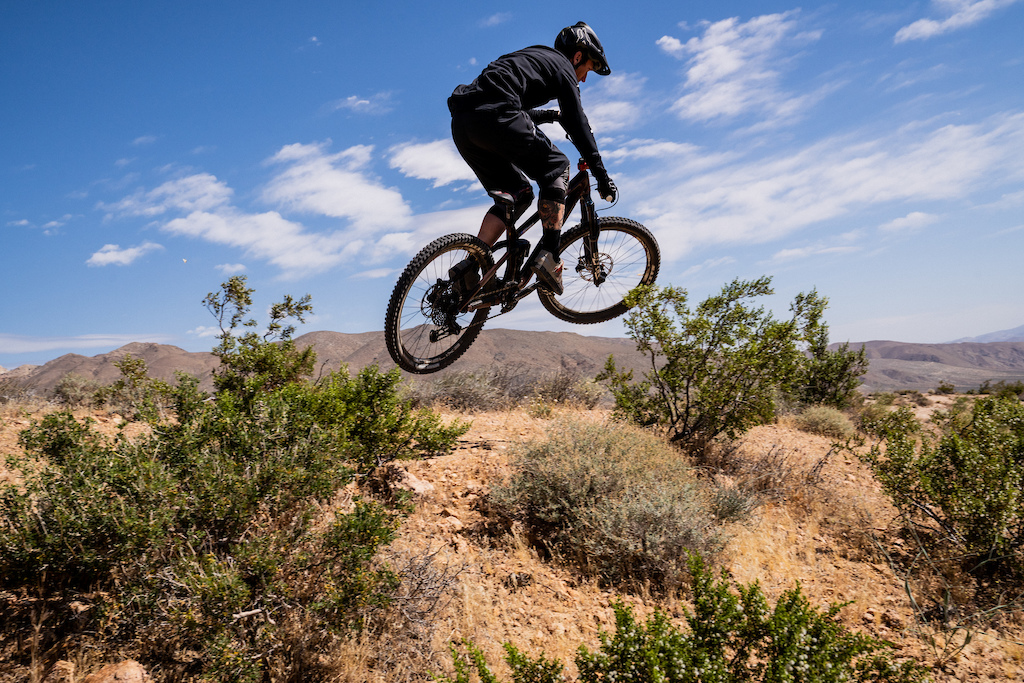 Ben Gagliardi is well-established in the world of skateboard and snowboard videos, and has worked on video shoots with Hawthorn Heights, The Offspring and Metallica. Ghost Town marks his first foray into MTB edits.

The three-day shoot took place over an early June weekend with perfect weather. The desolation and scale of the production was ideal in the reality of California’s Covid lockdown. With so much space to play with, social distance was not a problem. 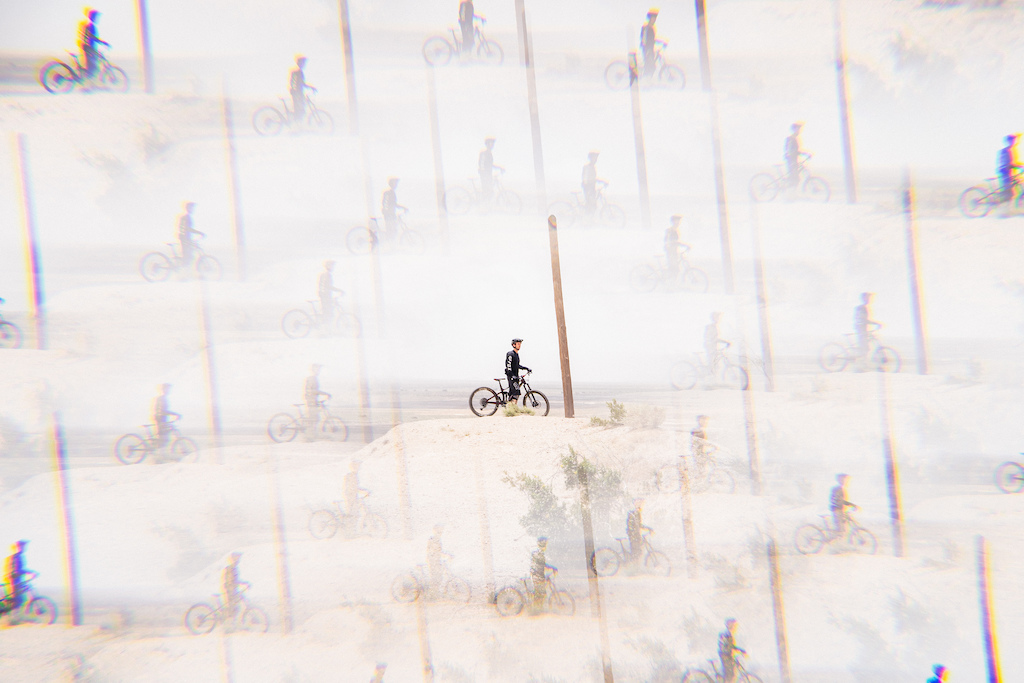 Kinney, who has lived in the area for the decade he’s been with Woodward, hopes that Ghost Town does a couple of things:

• Let the burgeoning MTB scene and riders from out of town realize what amazing riding and epic landscapes are easily accessed in America’s Old West.
• Remind us all to open our eyes to the hidden gems that might be right in our own backyards. 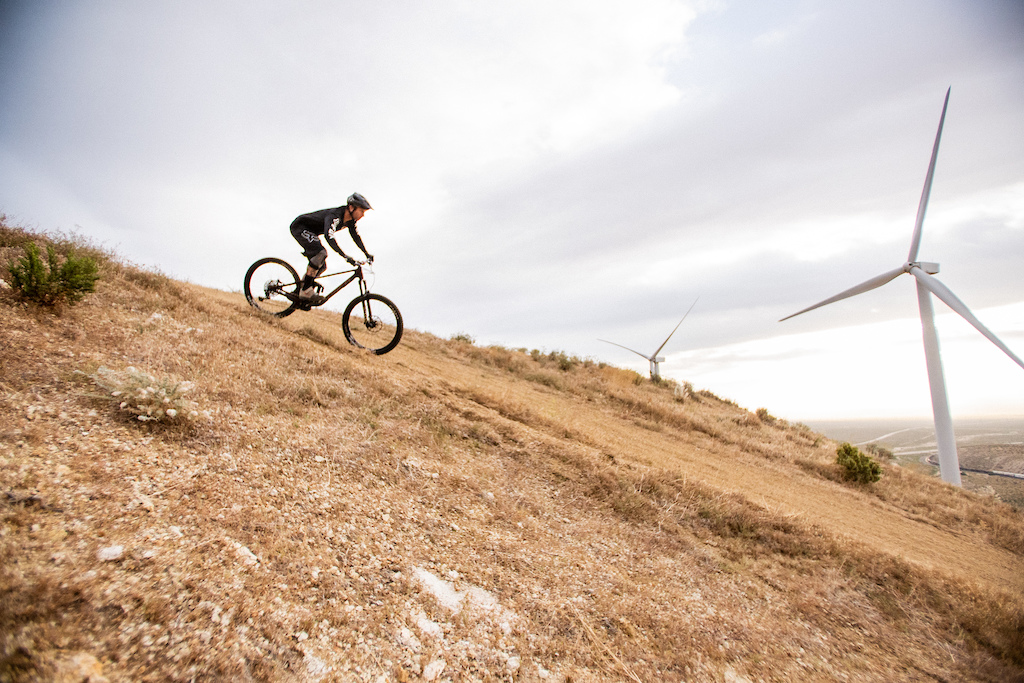 landscapeben (Aug 21, 2020 at 2:35)
With you on that, the title featured a ghost town playground, the video featured a few frames of the ghost town in passing.

Geochemistry (Aug 20, 2020 at 16:33)
Need more desert riding videos! I hope this just the start of more off the beaten path videos. Literally.

silentsingletrackslayer (Aug 20, 2020 at 17:15)
If it did not know the spot you almost would have been able to fool me that this is shot in one location. Big ups to Jake hitting the man eater on his trail bike!

eyeslide (Aug 20, 2020 at 19:08)
Reminded me of the Decline magazine ads that took up two pages and had one horrible pic. Great riding though, needed more of it, but it wasn’t a dj so i get it

REZEN (Aug 20, 2020 at 21:23)
I was just in Mammoth myself this weekend. I thought the same "Wonder if there's any non-motorized riders out here in this wasteland?"

rrolly (Aug 21, 2020 at 6:59)
I get so triggered when I see wind farms. A lot of people see them as environmentally friendly, when they're not. And it takes a massive amount of them to generate such little power. Please stop with this technology.

ali-chapple (Aug 21, 2020 at 9:51)
I suppose you have a better idea? They're a hell of a lot more environmentally friendly than a vast array of other technologies (did my thesis on this subject). Also, new generation turbines can power up to 4000 homes each, which I would say is a actually quite a lot of energy...

They can be paired with new power storage technologies very successfully, produce zero emissions when producing energy, and can be removed with little to no scarring left on the landscape, so to quite honest, I think you should go do some more reading.

rrolly (Aug 22, 2020 at 10:16)
@ali-chapple: dm your paper. Would love to read it, honestly. If what I've come across is wrong, great. But what I've seen is a significant difference between optimal power production and actual power production. And added to this the impact on plants and animals in the installation and operation of wind farms. I am genuinely open to see what your research says.

ali-chapple (Aug 24, 2020 at 9:16)
@rrolly: The only copy I know of is stored away on some shelf in a library in Scotland so I might have trouble getting that to you haha!

You are right, the capacity factor for a wind turbine ranges between 25-40%, depending on locations, time of year, etc, etc. but this is all considered in wind farm planning/operation. Per kWh of energy actually produced, wind is extremely competitive with conventional methods (www.lazard.com/perspective/lcoe2019)

As far as plant / animal impacts, wind farms are normally installed in more rural areas/seabeds I agree, but it's important to consider not only the direct impact of turbine installation (clearing trees for a turbine foundation, for example) but also the indirect impact (global plant/animal impacts due to less CO2 emissions). Overall the direct and indirect impacts of wind and solar (hydro is a completely different story) are about as minimal as it gets, granted they're not perfect but until we nail nuclear fusion, its about as clean as it gets for energy production, and its quickly becoming the cheaper option as well.

rrolly (Aug 24, 2020 at 19:26)
@ali-chapple: Thanks for the info. Last I paid attention to it, solar had significantly less negative impact on the environment. Of course, nuclear would be the way to go with a couple of improvements. People get freaked out about it given old reactor issues.