Berkshire Bike and Board, along with Bousquet Mountain, came together again this year for another (ski) season-ender downhill race. For Berkshire locals, this yearly 'run-what-ya-brung' format race is the official start to the riding season.

The plan for the race, as always, was to run the course no matter the conditions; be it mud, snow, or a combination of both. To stud or not to stud, the fat bike or the enduro race rig, it's up to each individual rider to decide how to attack. The weather was perfect and a crowd turned out to watch the bar-to-bar carnage.

The morning started with some qualifier runs, where every rider was allowed as many runs as they felt like pushing back up for to qualify for the heat brackets. I showed up to shoot video, but couldn't resist taking a few runs, which landed me in the LCQ... whoops! I had the lead all the way to the second to last corner, but I hit a crater and crowd favorite Levi Brown took the lead. He accused me of sandbagging, whatever...

As always, there was no shortage of crashes, but thankfully everyone made it to the after-party in one piece. The rest of the night consisted of beers, raffles, MTB videos on the big screen, and some late night ski bike antics.

Specialized Bicycles along with Berkshire Bike and Board stepped up huge to raffle off a 2020 Fatboy SE Fatbike, and Crank Brothers, Thule, Skratch Labs, Shimano, and Smith Optics all provided killer prize packages as well. All of the proceeds from the raffle are going towards a pump track design for downtown Pittsfield Massachusetts, which is already an up and coming hub for mountain biking, with new trails (and breweries) popping up on the radar.

This event is always a great opportunity to throw a leg over the bike again after looking at it all winter, come out next year and join the fun! 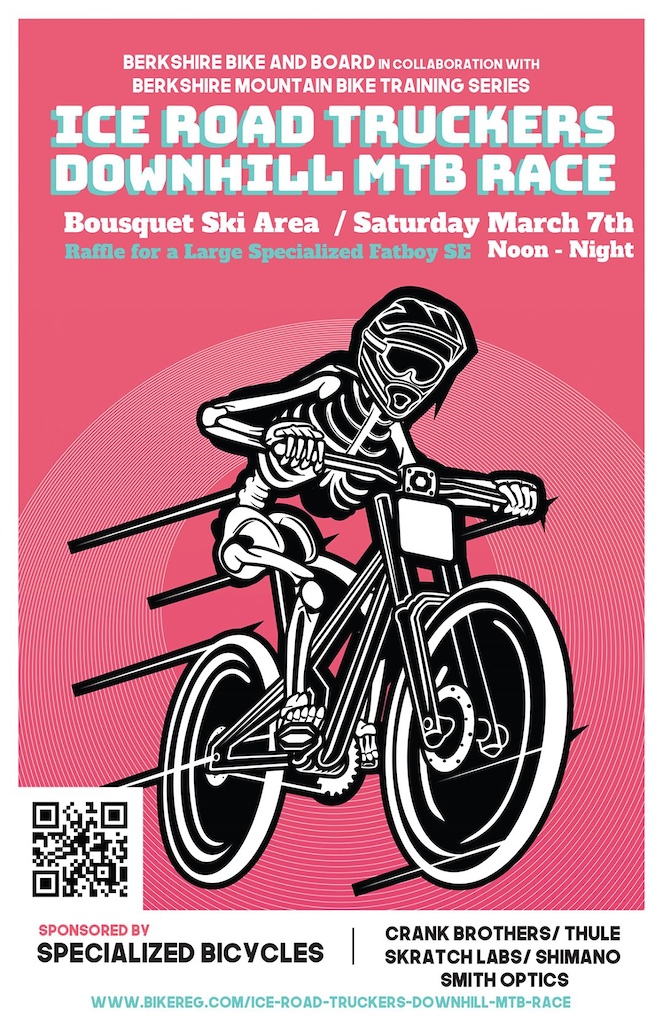 Larson627 (Mar 30, 2020 at 6:50)
Thank you! The event was before there were any cases reported locally, I figured something non-covid-19 related would be a nice break right now, that's why I didn't mention it! The song choice, however, was sort of a nod to current events...

streetkvnt-kvlt (Apr 2, 2020 at 16:31)
@Larson627: don't know why I didn't know it was them considering I grew up listening to T.S.O.L., Circle Jerks, Dead Kennedys and other era California punk bands haha.

Sarutobi (Mar 30, 2020 at 0:44)
In my country, we run a similar race every winter! We have two races: winter DH and like this but not 4X, Duel slalom.
This year I even finished a second at Duel slalom. Hahahahahah cheers from me.

billroth (Mar 29, 2020 at 20:44)
Times changed quickly. sad to say all of us (especially those at the top) were oblivious to the train wreck headed our way.

levizbrown (Mar 30, 2020 at 5:13)
It was a couple weeks ago, I keep joking to my coworker who put this on that this was the event that changed the world

scotttherider (Mar 30, 2020 at 11:28)
@levizbrown: he’ll they should have gotten red bull there. It was the last event pre-covid19f*ckeverythingtohell.