For the second year running the PMBA Enduro Series has been the crew behind the Hopetech Women’s Enduro. Hope being one of the major sponsors for the series, it’s an obvious collaboration for this event. 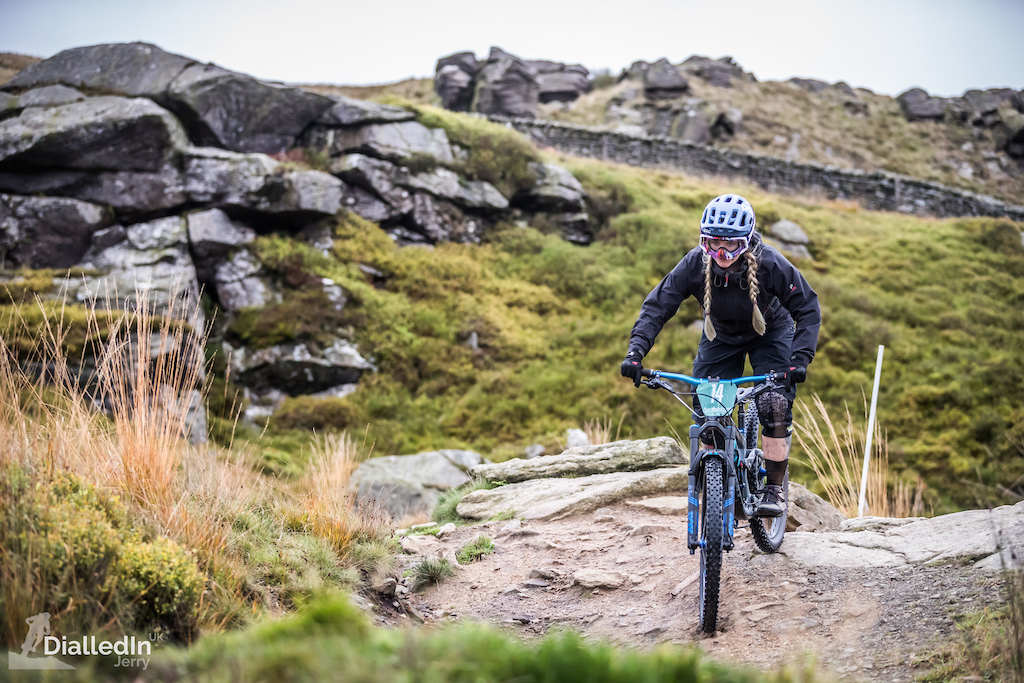 Amber Charity negotiating the rocky crags on stage 2
This event is the biggest all women mtb race in the UK, and is a key event in enticing women into what is perceived as a very male orientated sport. With complete novices, past & current racers; 11 year old's to those in their late 50's a complete mix of 320 women had signed up to this unique event. Hope put in a lot of work on the "extra's" goody bags for all racers, finishers medals, enticing a huge array of trade displays, free Crepe's and marshmallows to toast on a roaring fire pit; the sign on area even had fairy lights to add to the relaxed atmosphere.

The event takes place at Gisburn forest, one of the super 6 trail centres in the north of England; Grizedale, Kielder, Hamsterley and Chopwell Woods being the others. The PMBA Enduro Series is no stranger to Gisburn forest, its where it all started in 2013 and has hosted the opening round of the series at every year since. 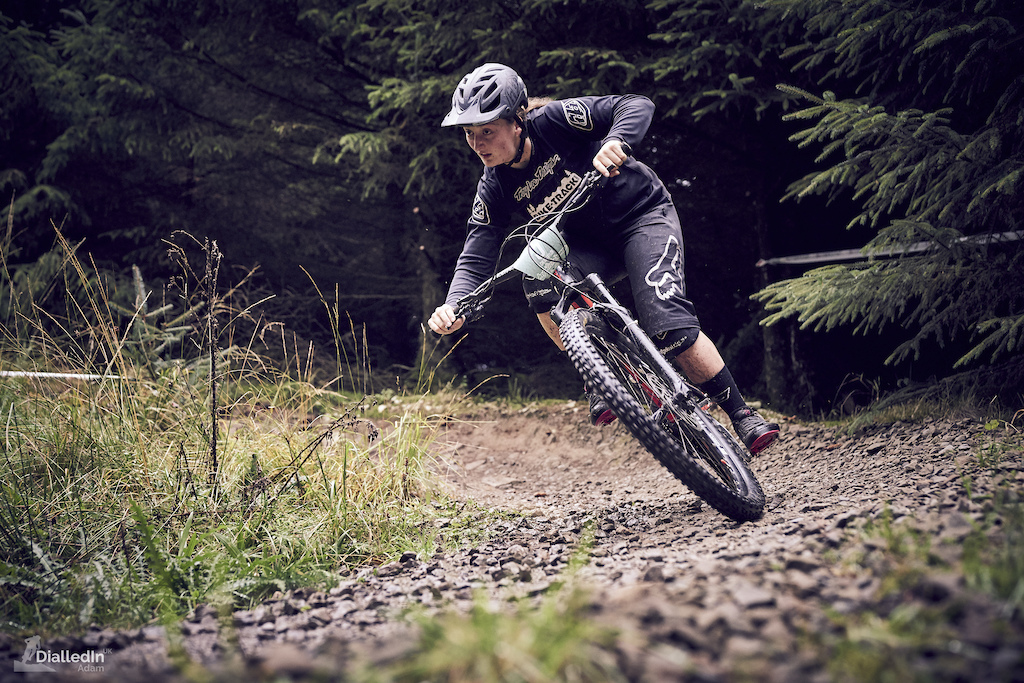 Chloe Taylor, one of the Elites battling out for the title
The purpose of this race is to attract as many mountain biking women to come along and either race for the first time and experience the race scene with like minded riders. This race also attracts seasoned racers too, loving the opportunity to see so many women racing together. 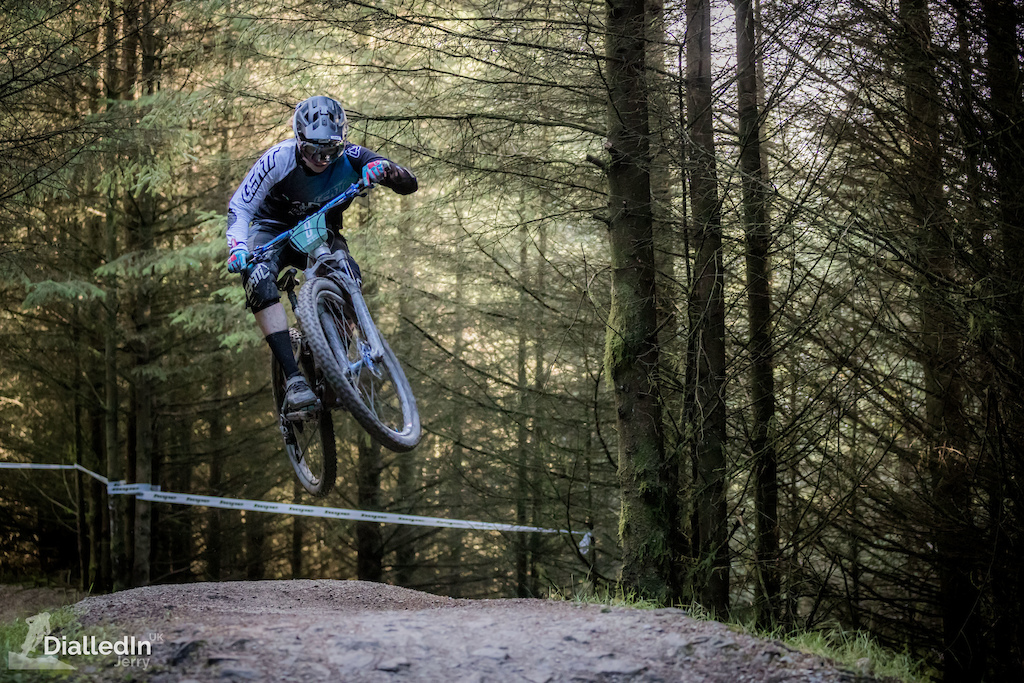 Gowaan girls very own Martha Gill racing in elite and taking the win
The spirits were high for the race day. Even though the weather was ruthless leading up to the race, with heavy rain storms and hefty winds forecast all weekend, it did not materialise, the temperatures were reasonable and the rains kept away. It really could not have been more perfect. 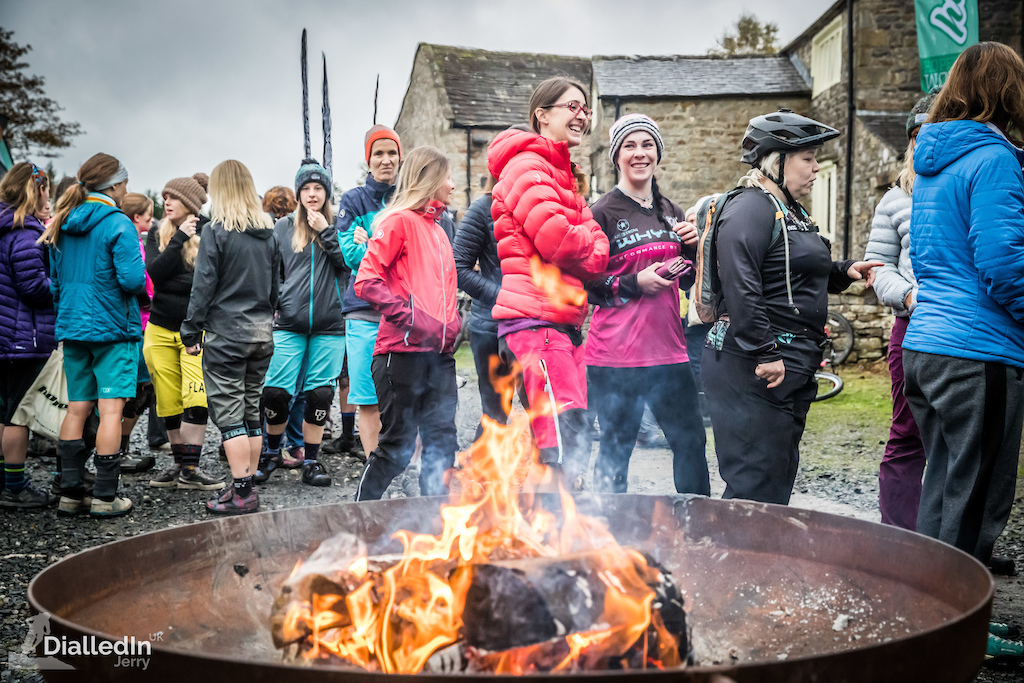 Riders queuing for sign on, fire pit ready for marshmallows later on in the day
The race itself consisted of an approximate 11 mile loop going far out into the Gisburn forest to the rocky crags. 3 differing style stages were timed within the loop. “Homebaked” was the 1st Stage, a tight stage, with slippery roots and a superb rocky staircase feature that had many tackling it for the better times. The alternate line was longer and added much time to those not keen on the techy rocks. 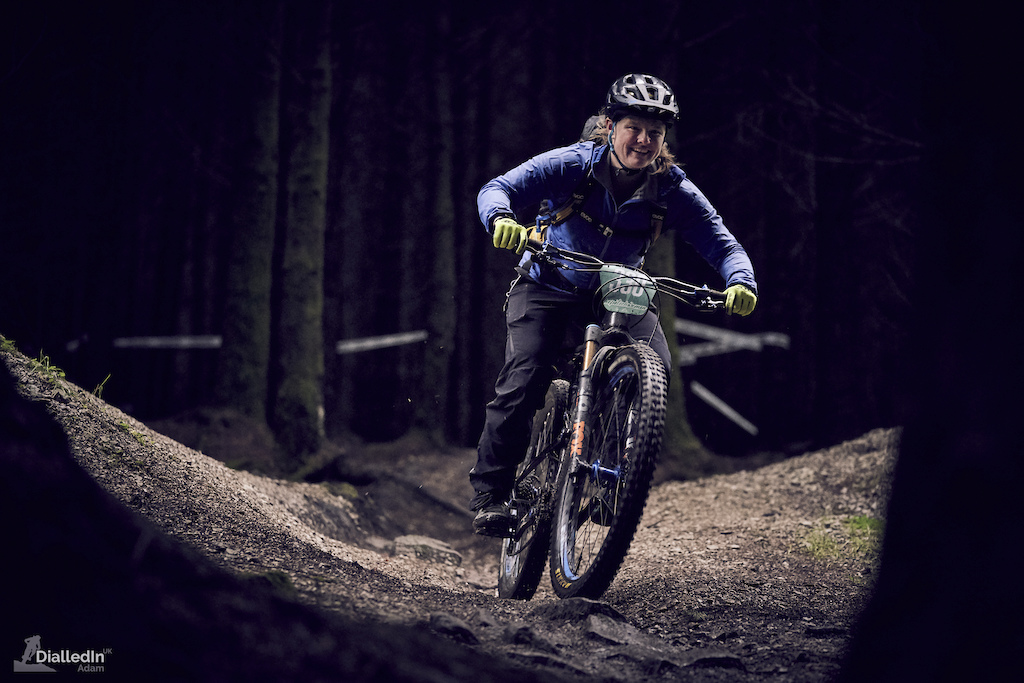 Stage one was dark in places with a low October sun 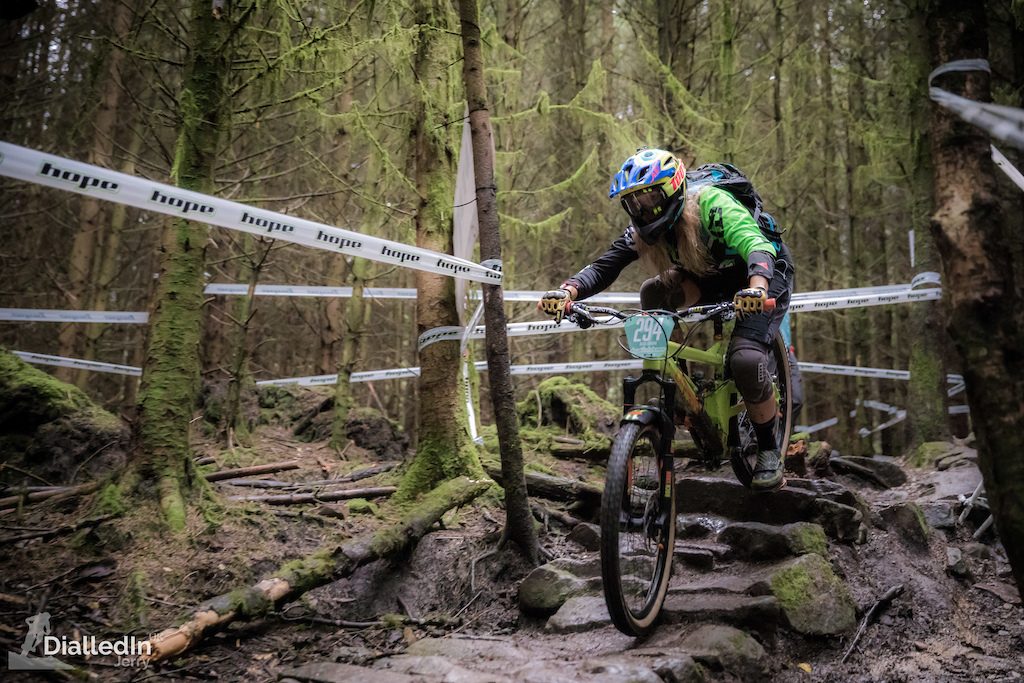 Becks Wareing taking on the rocky step in stage 1
The second stage “Long Way Down”, started near the infamous Whelpstone Crag and crossed rocks before an evil little fire-road uphill sprint to the new trail, with big sweeping berms and off camber trail centre gravel. 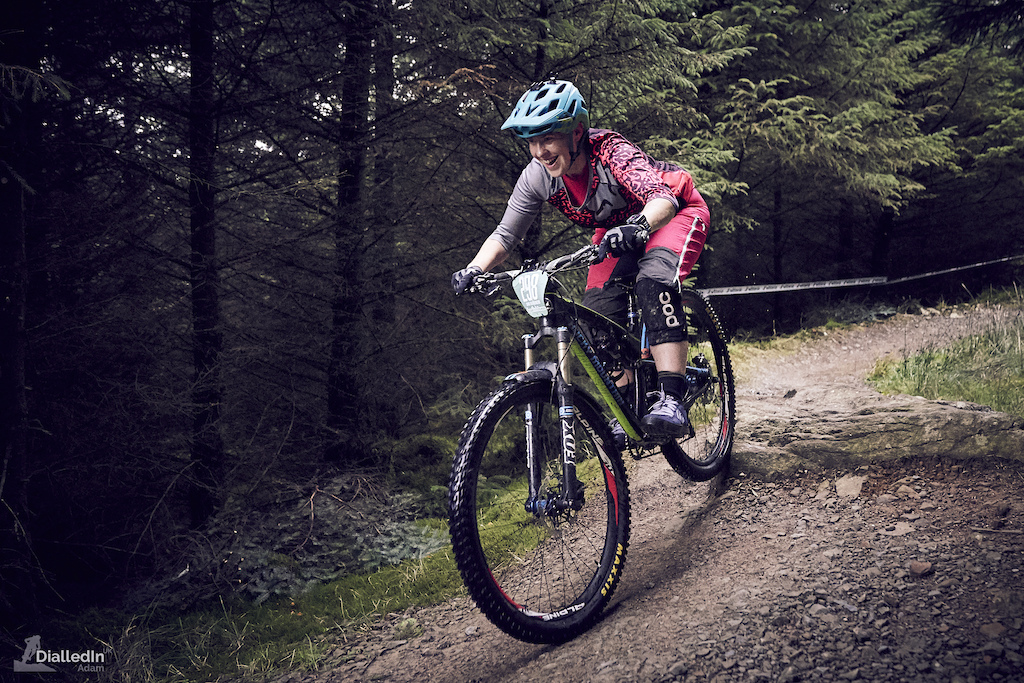 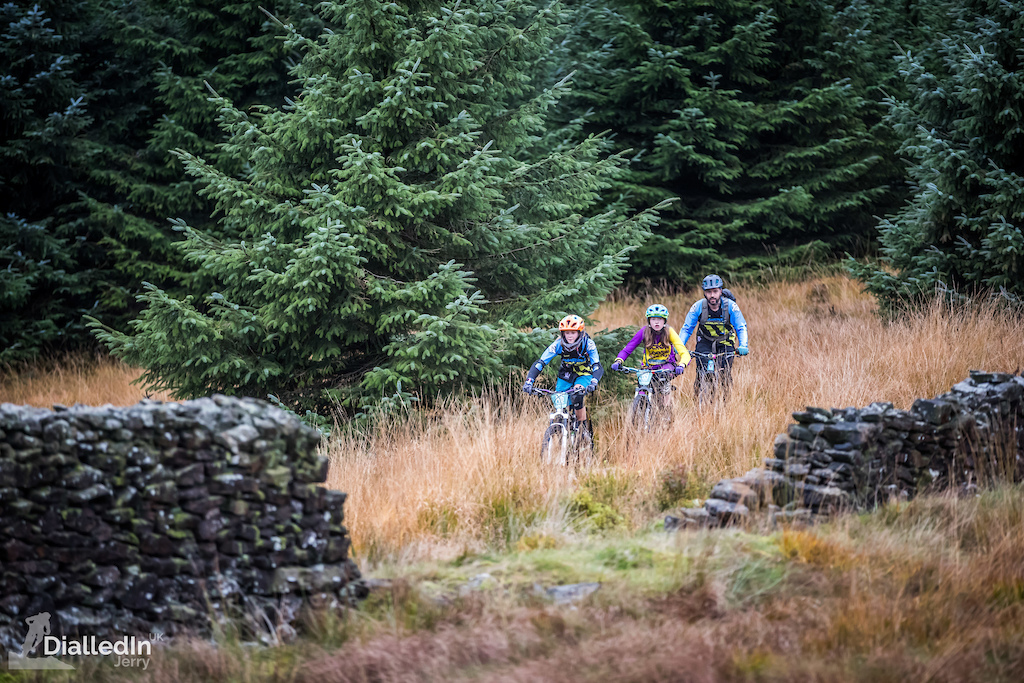 It was quite a warm up getting to stage 2. The younger riders were able to enter if accompanied by a chaperone
Finally to stage 3, “the Hopeline” a bit of a gravity stage with jumps drops and tight berms, with also the biggest group of hecklers (sorry supporters). Talking of the supporters, there were loads. Especially on the rocky steps on stage 1, when the women rode the tech, they got the cheers from the crowd! On stage 3 the supporters gathered on the three tabletops, and a good rock drop. Take on the rock drop and the cheers got louder and louder. 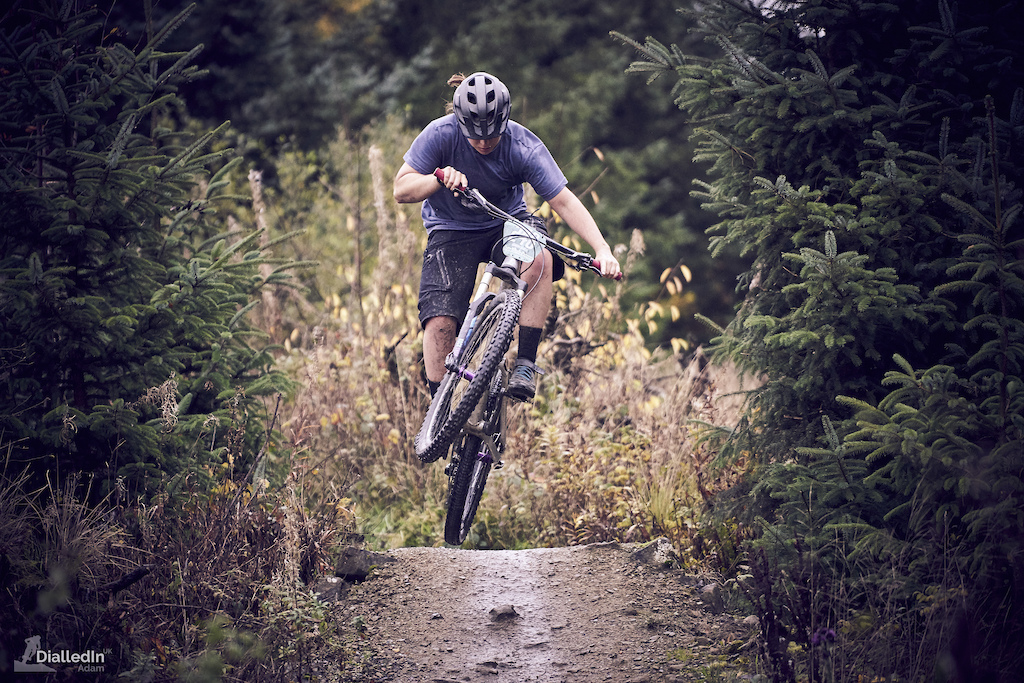 Hannah Saville sure didn't hold back on stage 3 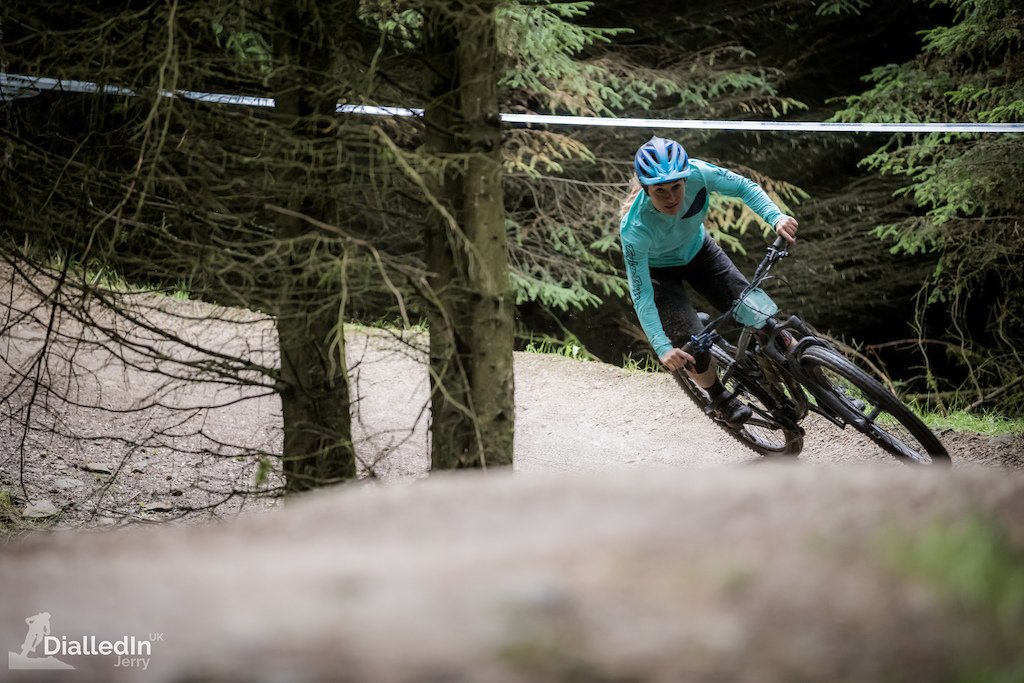 Veronique Sandler- Lean it girl.
The atmosphere was electric, not only from the riders, but also the supporters. DialledinUK has been to plenty of races, but nothing compares to this atmosphere. 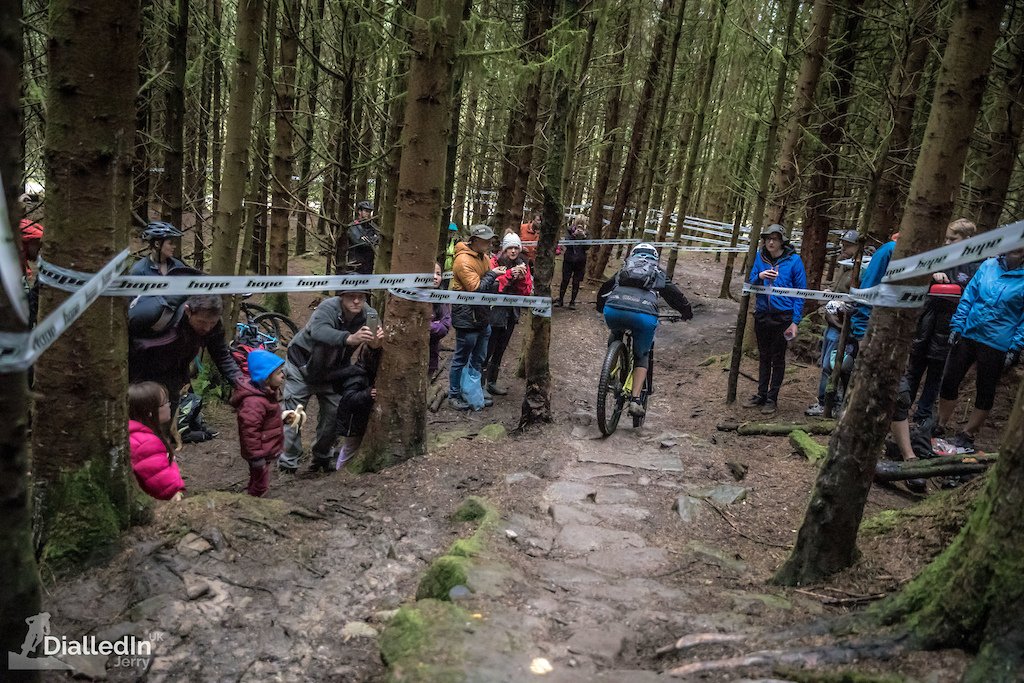 Supporters on stage 1, cheers as the riders hit the rocky steps 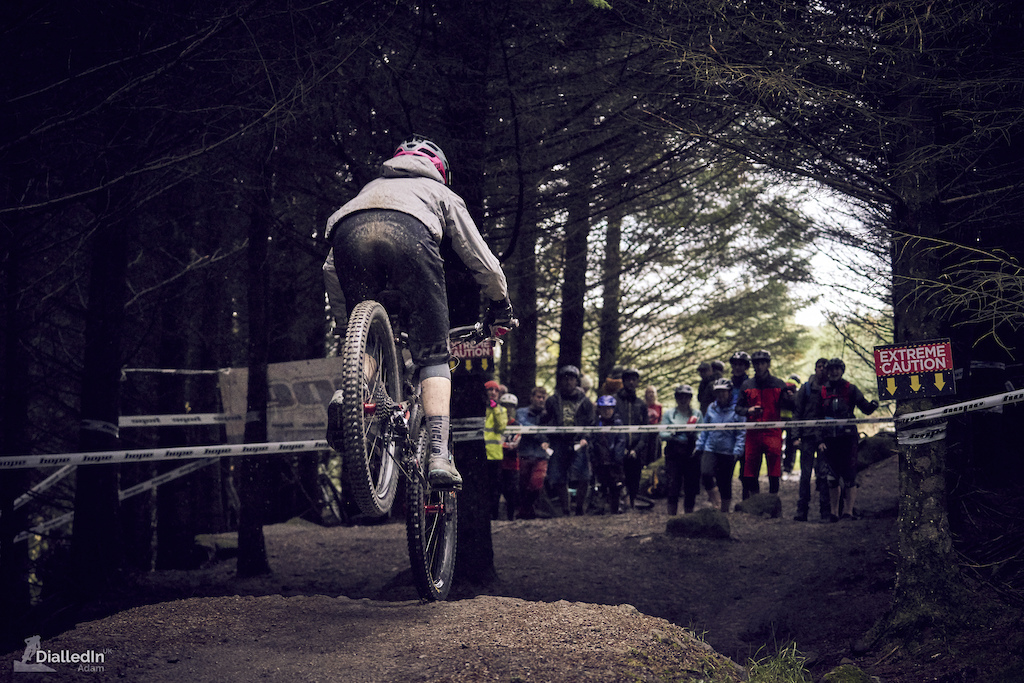 Hecklers corner on stage 3 for 2 years in a row
247 women raced on the day, with the elites recording some of the fastest times. Martha Gill (Elite) was the overall fastest and elite winner of the day. Winning in 6:09.21 she was very closely followed by Katy Curd (Elite) 5.19 seconds behind. 3rd fastest of the day was not an elite rider but Megan James (U21) in 6:21.30. Well worth noting that the fastest four U16's were also in the top 32 overall, and in fact the fastest 3 of every category including the Grand Vet (50+) finished in the top 36 overall! It was a tight race for the 3 fastest times of the day and an epic battle between Martha and Katy. Looking through the results, it’s great to mention the result from the amazing Karen Van Meerbeeck who not only came 1st in the veterans (40-49) but also came 8th in the overall out of 247 women, a star of 90's MTB racing showing she still has the skills and speed to mix it with the best. For a full rundown of the results head over to roots and rain. 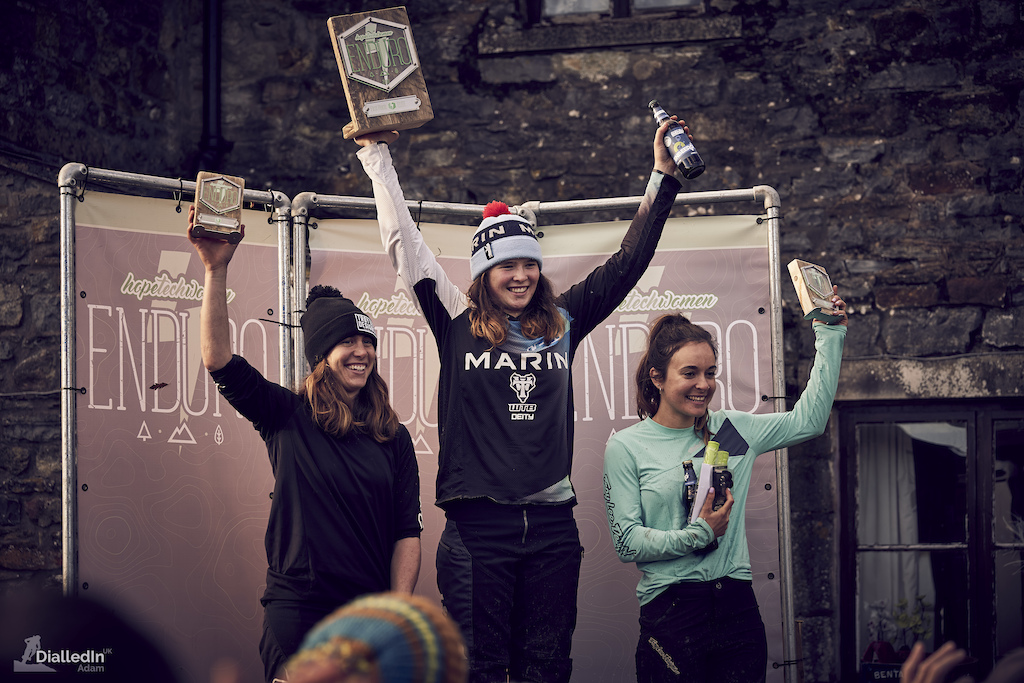 The elite podium. Martha 1st, Katy 2nd and Veronique Sandler 3rd
This was another superbly run even by the PMBA Enduro Series with the Hopetech team. The atmosphere all day was incredible and many people are already saying they cannot wait until next year. The dates for the PMBA races is out now, with an average of 10% women entering each race, it would be great to see some of these women enter. The stages are more technical in the main enduro series, but take the plunge and you can have Enduro fun more than once a year; and there is always the "lite" option that misses a hard stage if you prefer. 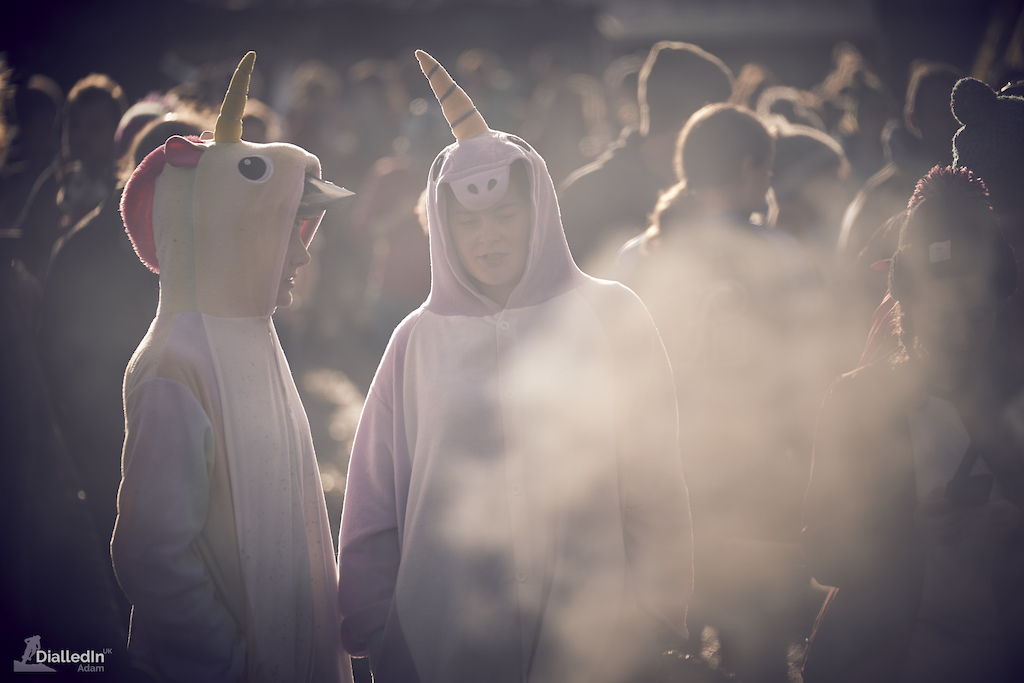 Diane Hawkins and Anna Fletcher returned in great spirits
See you next year, 20th October 2019 to be precise. For more information on the PMBA Enduro Series head over to the website here for updates. 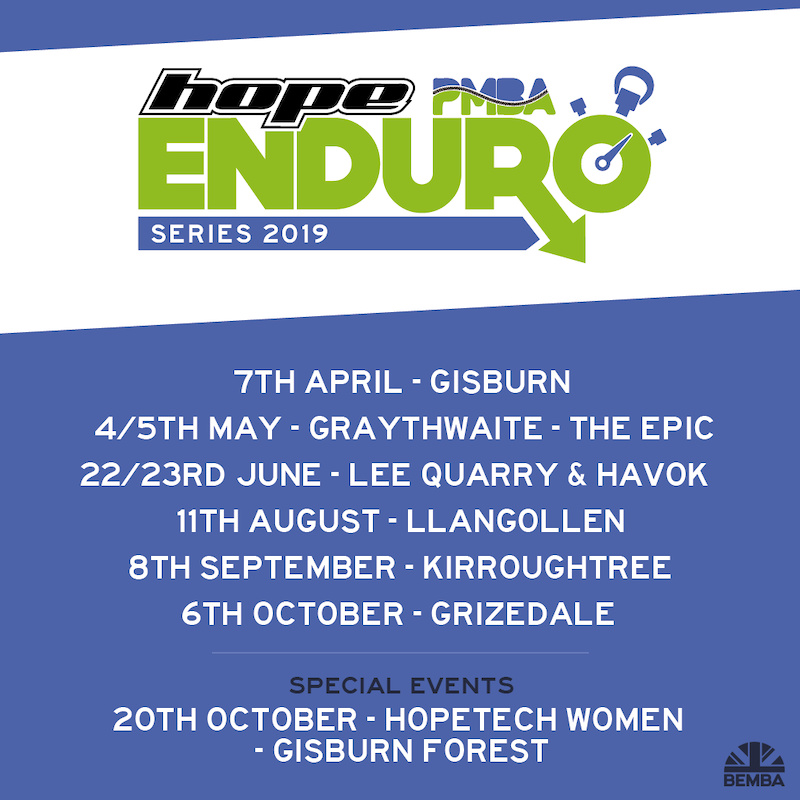 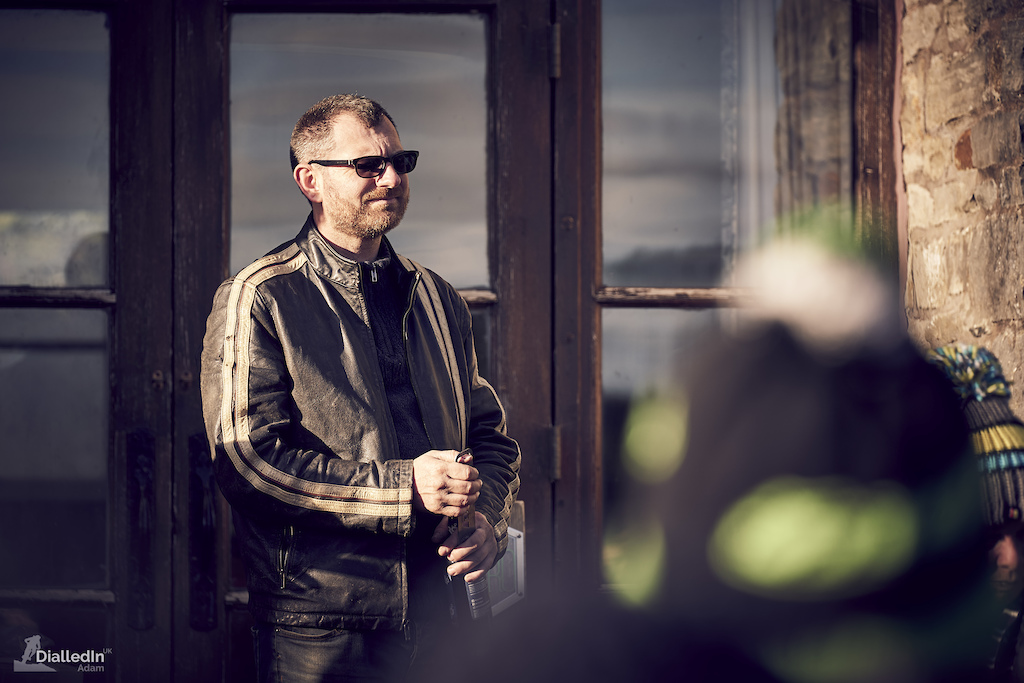 The man behind the PMBA series - Kev Duckworth 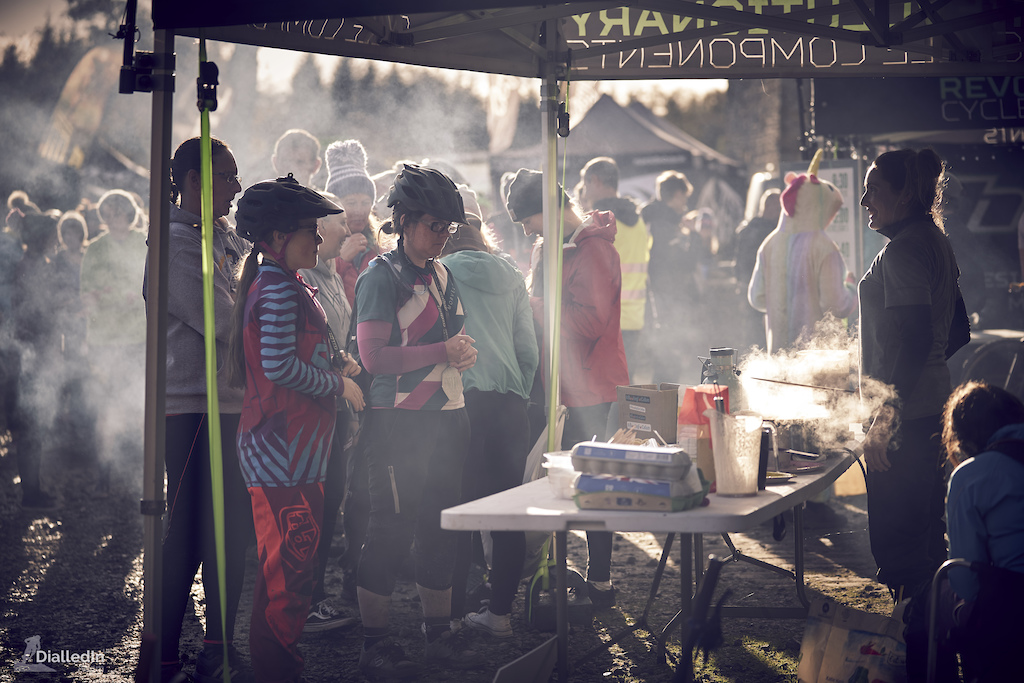 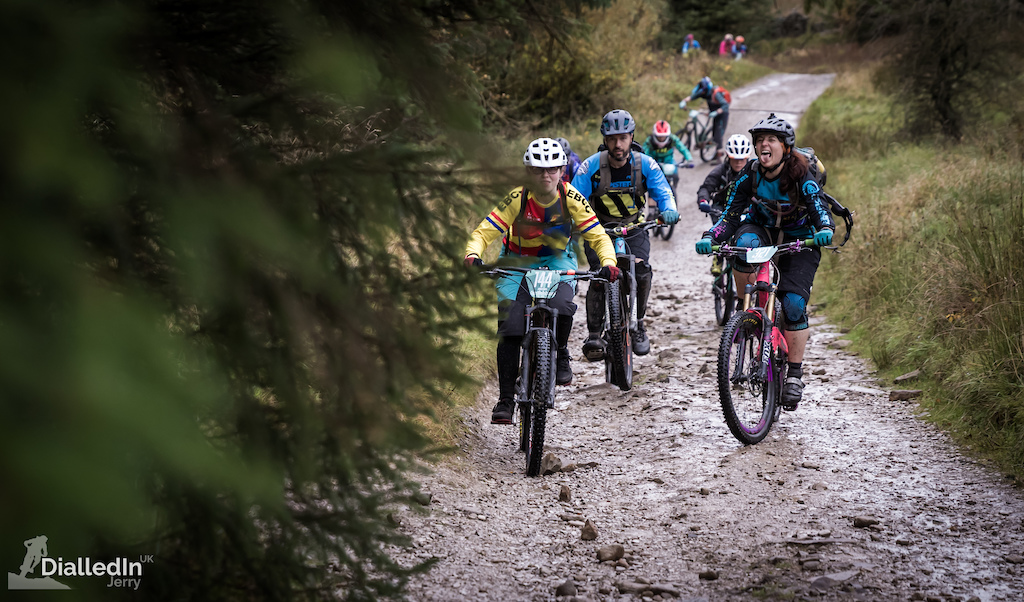 This climb is called Cardiac for a reason. Amber and Nicola taking on the climb

olitom (Oct 19, 2018 at 13:23)
Great race, so pleased to beat last year’s time. A fabulous atmosphere and encouraging support from fellow riders as well as the PMBA marshals. Already looking forward to next year and hoping to get some friends to join me. Awesome event and keep up the good work to all those involved in organising and running it.

tellend (Oct 19, 2018 at 14:40)
Huge amount of appreciation for all the staff at these events. Stage one was the highlight, all the marshals were really funny!

danposs86 (Oct 19, 2018 at 13:51)
Really great event, met so many women who were at their first race. All of them were looking forward to it and all had smiles on their face after finishing the stages.