The three-time Red Bull Rampage champion does the dirty work to make his dream yard a reality.

Initially for Kurt, his grandma taught him how to ride his bike as a means of getting back and forth to school but he soon discovered a sense of freedom and love for riding. This ultimately transpired into a 15 year career as a pro rider with three Red Bull Rampage wins for the Nelson native. Currently on his property he is constructing an epic trail tailoring it to his dream. This project will take a lot of work but for Kurt, it will be a labour of love.

Kurt's hometown of Nelson is picturesque with majestic mountains and winding trails, ideal for mountain biking and hiking. Although there is not a lack of amazing paths, they are not equipped for big jumps. As a child, Kurt would improvise and build jumps with his friends. Unfortunately they were short lived as they were continuously plowed down. This led to the idea of building his very own track.

It’s now a decade later and multiple revisions were made in order to create ultimate angles or to add more speed. During the project's conception, Kurt Sorge got more involved from a hands-on standpoint, from designing to creating. He traded in his bike for an excavator. Embarking on the next phase of his ongoing project, he learned how to use an excavator to work more efficiently, allowing him to make adequate progress during the winter months in time for spring. 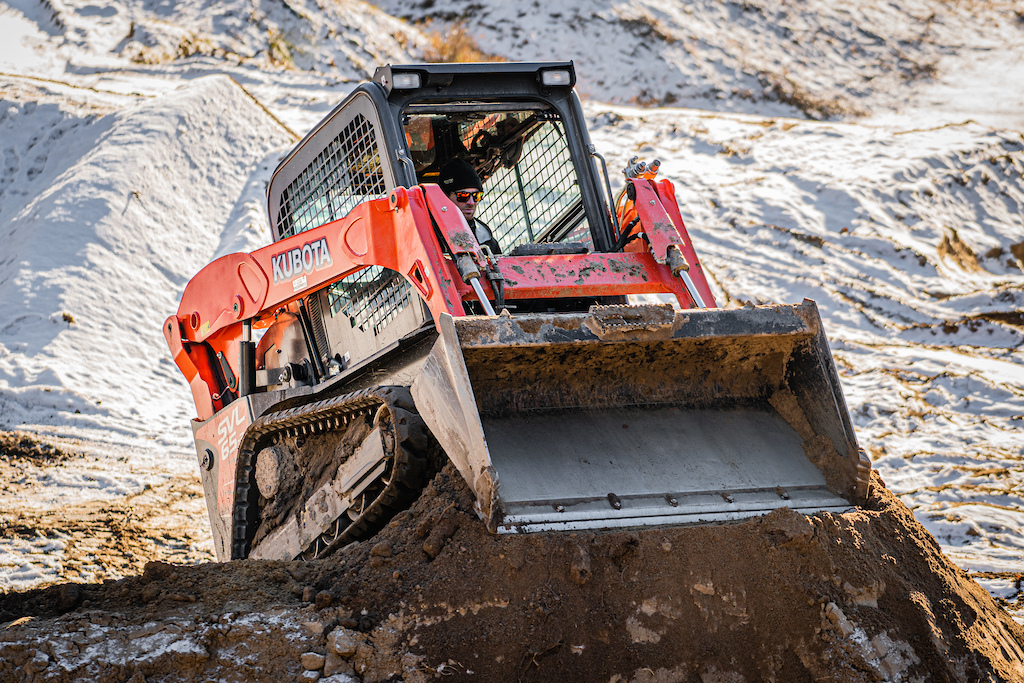 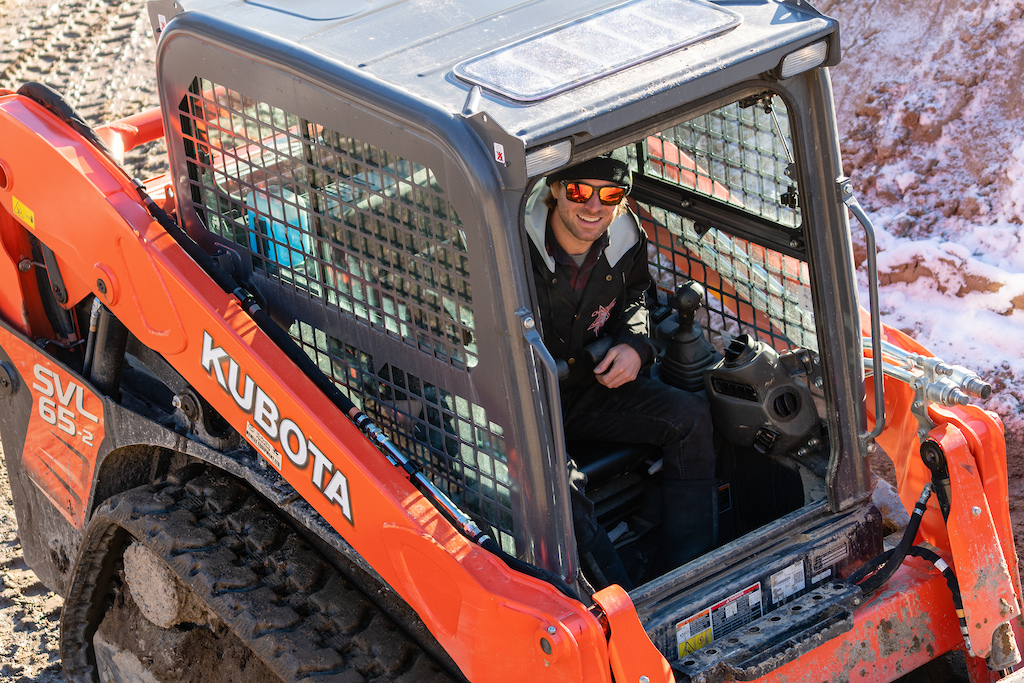 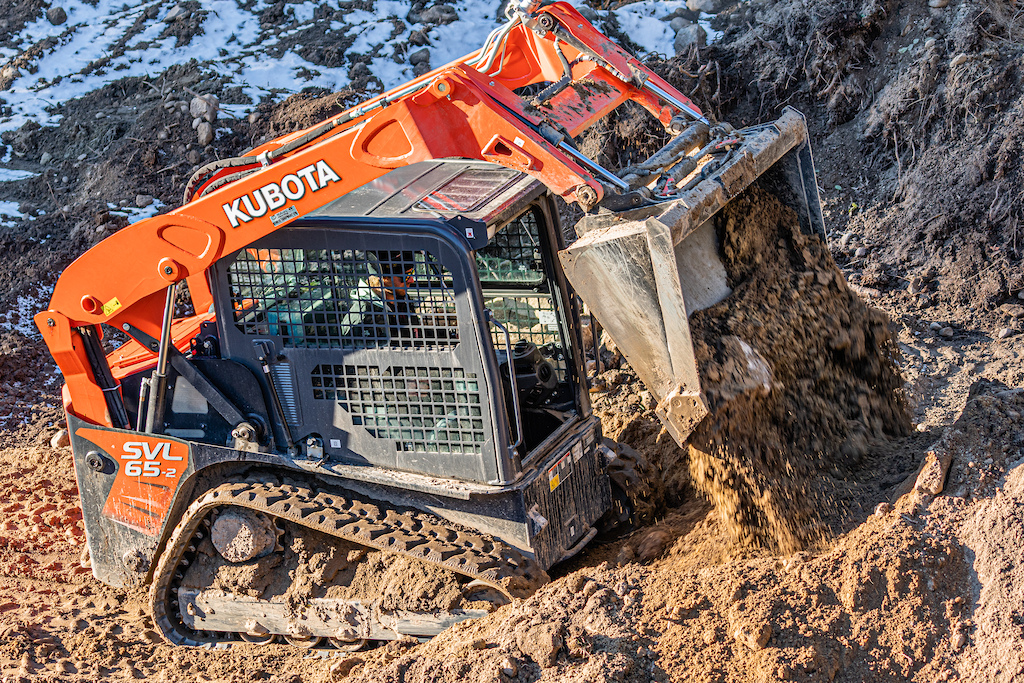 Seeing that Kurt was extremely involved in the project, he made certain that the 5-acre track would abide by his terms. Every hill, dip, curve, ramp, jump, and bump is tailored to challenge and elevate his style. Simply mere steps outside his door live a rider’s playground. This project was made possible with assistance from Kurt’s friends. Working together they plugged away as the guard began to transform into a reality.

From the operator’s seat of his Kubota U55 excavator, Kurt Sorge takes in the progress on his Nelson yard. He spots a few warm-up lines, carefully placed friend lines, medium lines, a large line featuring a wide gap along with more slopes taking shape. He’s been putting in the work on his dream yard — and it shows. 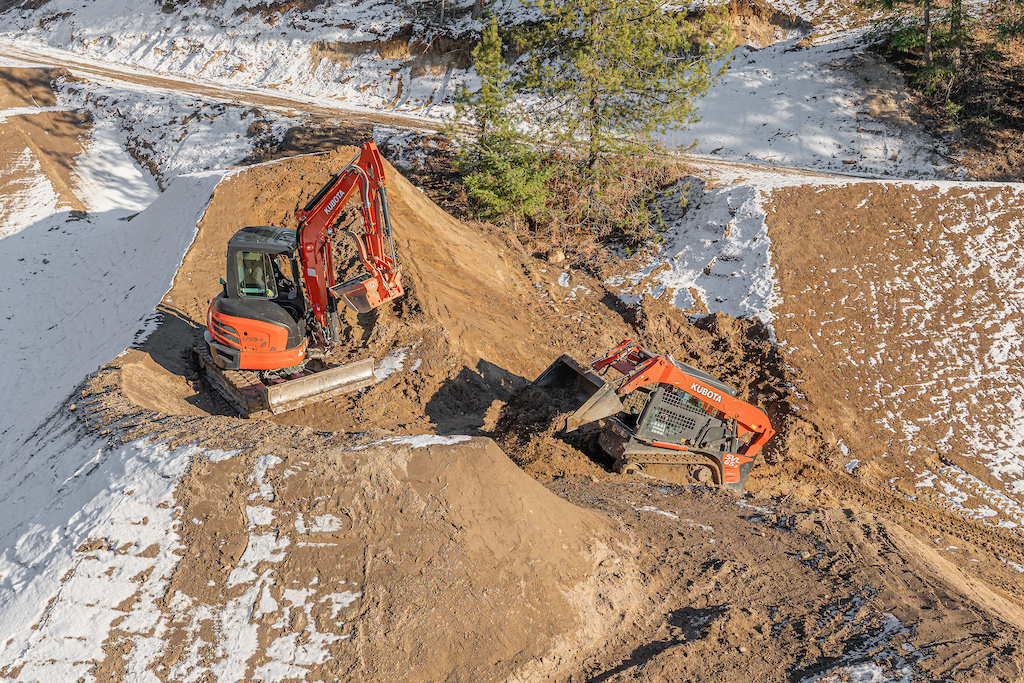 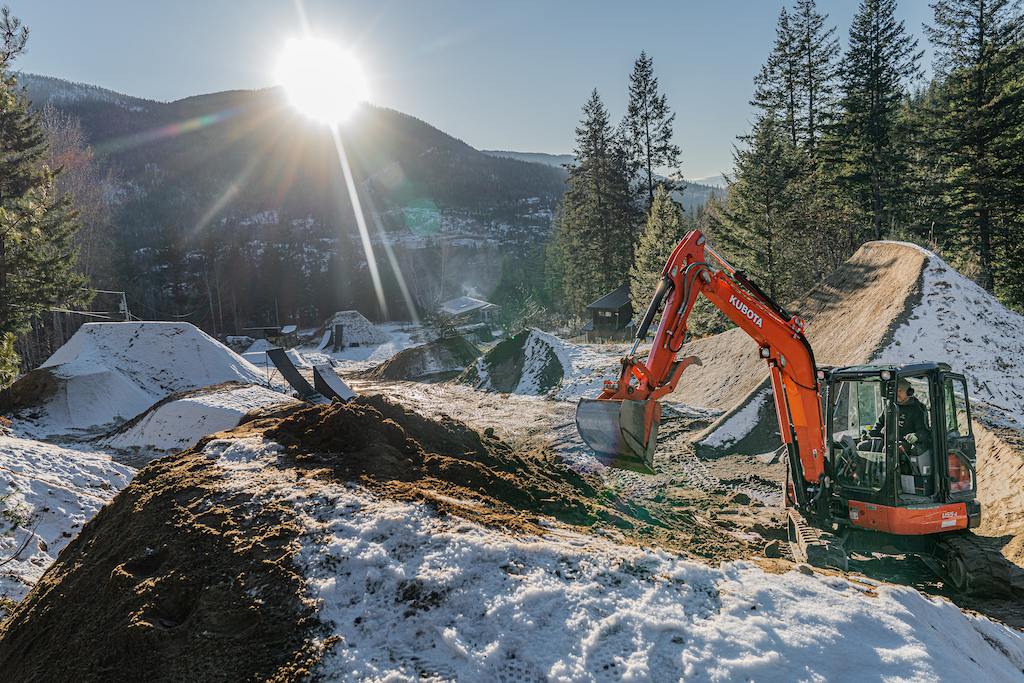 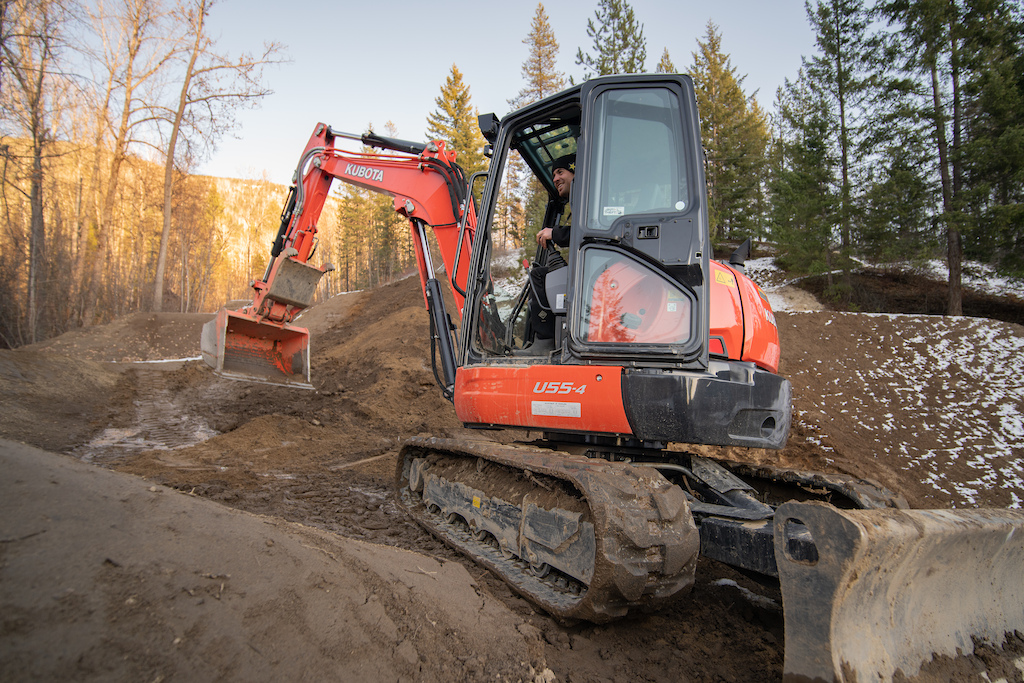 Months later they were nearing completion. One of the final tasks on the yard was the relocation of its second-largest landing. It was a serious challenge, but for Kurt, this tweak would allow for better alignment and more speed. Armed with shovels and his trusty Kubota, Kurt and his friends got to work. It took two weeks to complete the move, but the finished product resulted in a more satisfying jump.

Kurt built the ‘The Road Gap’ to maximize airtime and thrills. Featuring a large line with metal ramps leading to a 50-foot gap on big dirt landings. Balanced by medium lines with wood ramps and smaller first trails that flow to the larger lines, giving the track a quick pace and tempo. 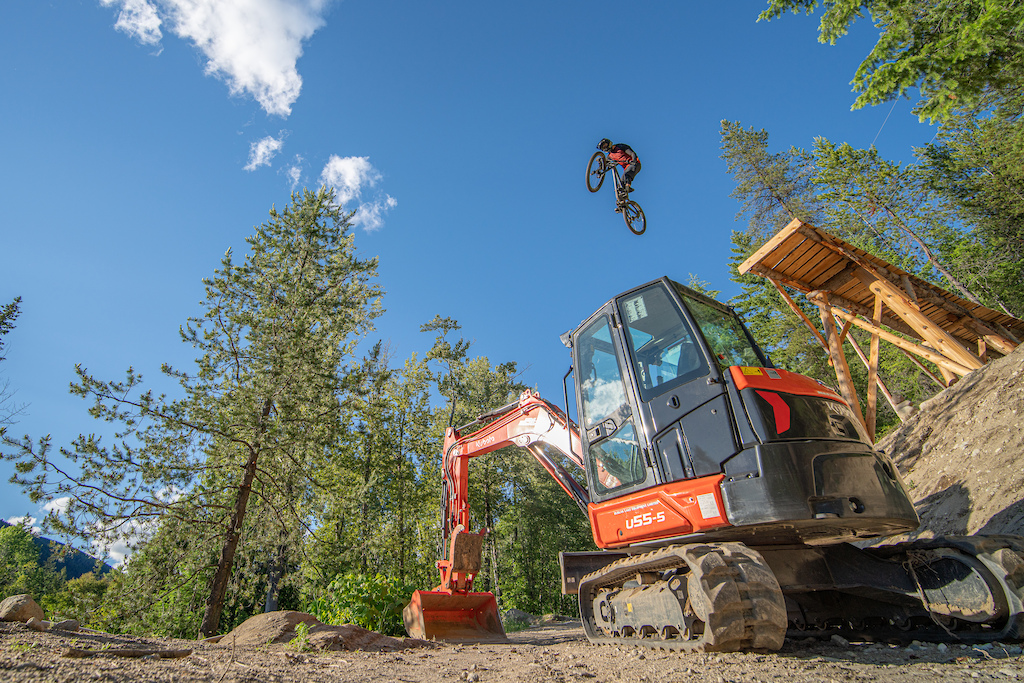 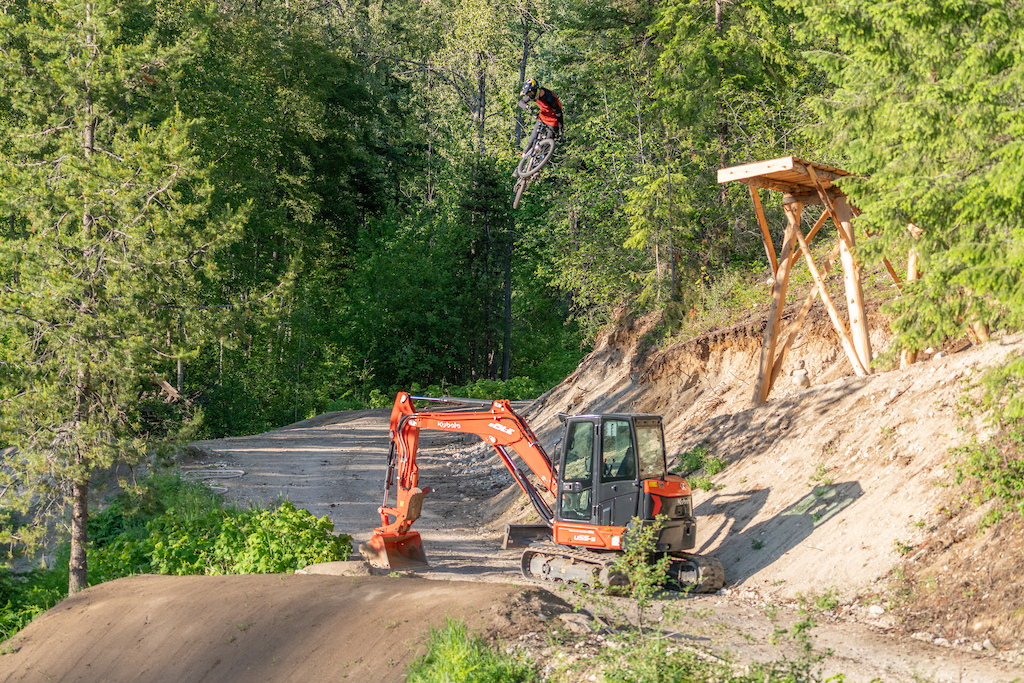 After months of hard work, the moment of truth arrived. It was time to ride the finished track. Kurt got on his ash black Evil Bike and ripped through the earth. A blink later and he was airborne. He hit every slope and ramp with brutal speed. From point A to Z and all spaces at once. Each trail and line he took flowed seamlessly to suit his style, a dirt bike demigod reigning over his domain. 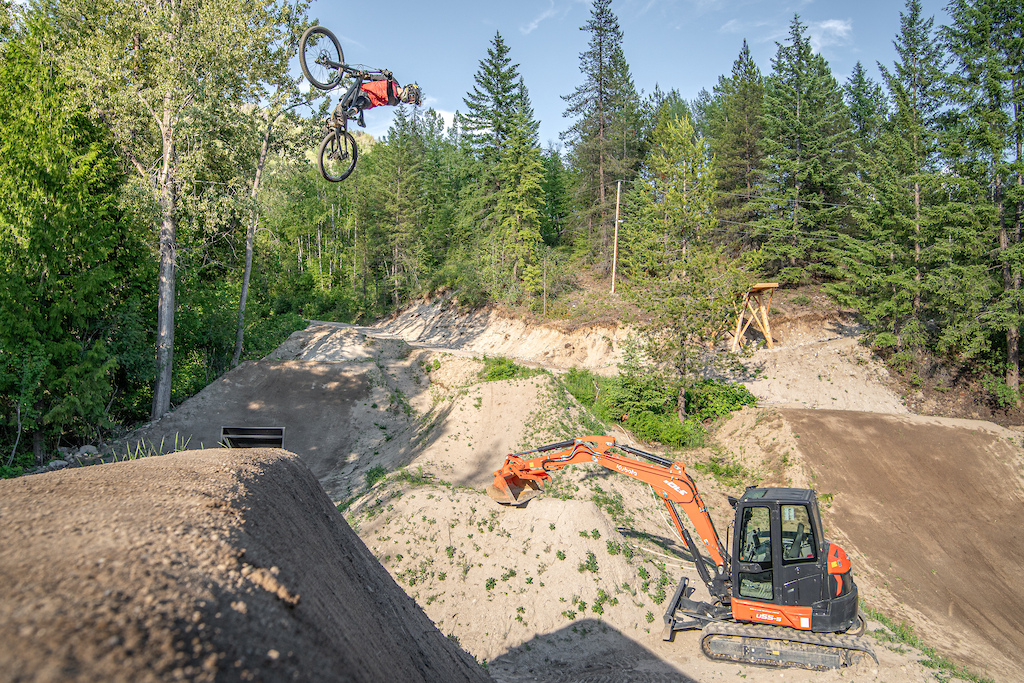 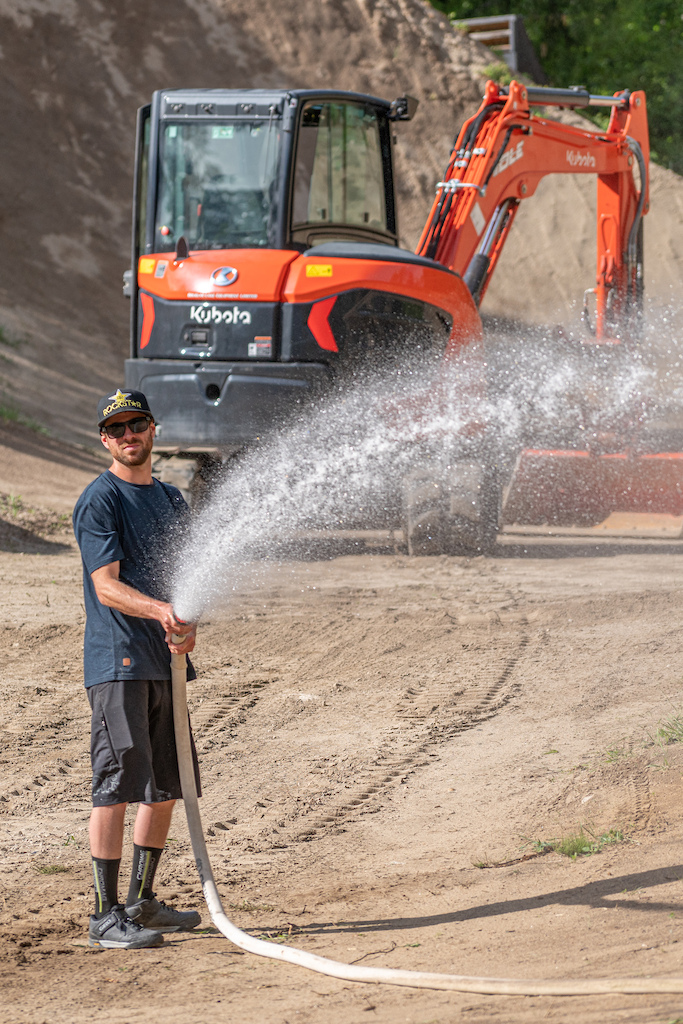 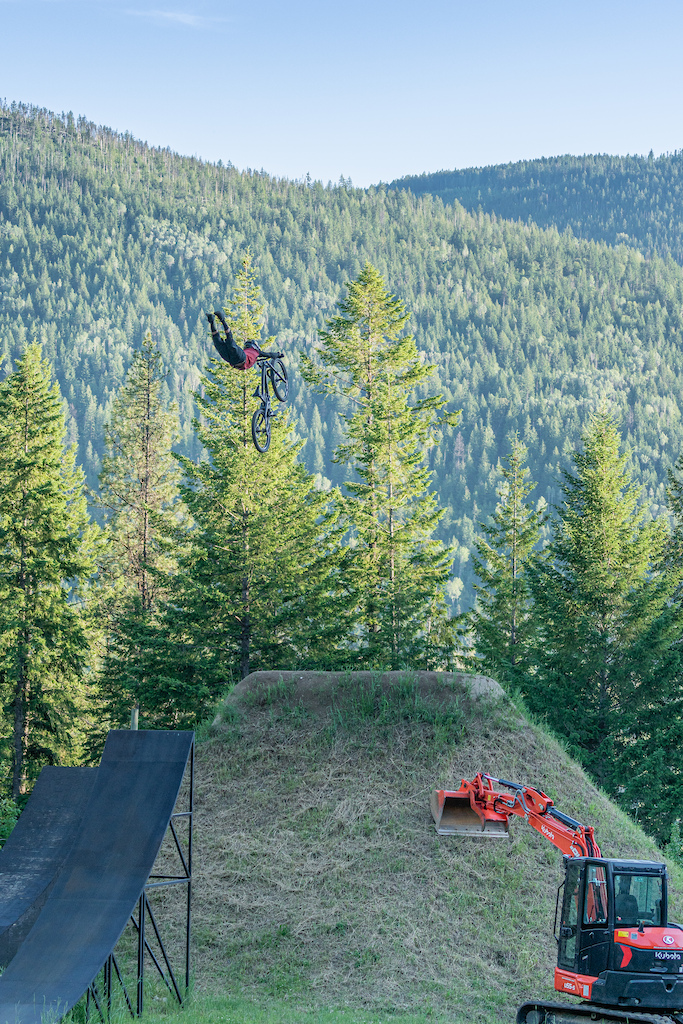 Every version of the track and jumps in his yard were filled with stories and memories. They all held a chapter in his dream of building a track fit for the adventures he wants. The dream was now a reality, and it was best enjoyed at top speed.

Dreaming big always demands audacity. It takes guts to pursue despite all the risks and obstacles. But it’s always worth powering through — because sometimes the reward is just that great.

We would like to extend a special thanks to Kemlee Equipment for supplying us with the Kubota equipment. Featured Kubota units: U55-4 Series & SVL65-2 Series.

Lloydmeister (Aug 13, 2021 at 0:39)
Hands up how many people here are in the market for some new earth moving machinery? I never thought kubota would have felt they would get ROI on something like this.

bigtim (Aug 13, 2021 at 0:56)
Digging out foundations isn't quite as extreme on video so this is a good way to get their product out on a film that'll be watched.

lk3city (Aug 13, 2021 at 3:12)
It's neverending long-shot marketing work, where you don't sell, just create brand recognition, which is necessary where you are about to buy something just to consider some brands. ROI is rather impossible to calculate. I would say it's better than most PR/brand recognition ideas out there. I would think that there are significantly more people than avarage on this website potentially in their target, Mostly men - check, outdoor hobby - check, probably higher earnings than avarage - check, probably higher rate of being or going to be from the construction etc. field than avarage. Plus it is a good content. Hail for the maker i wold say.

salespunk (Aug 13, 2021 at 7:37)
I know several people that own machinery rental companies that ride. It is not just personal use that this would influence and it will be used as marketing way beyond just the riding community.

ldhbaker (Aug 13, 2021 at 8:02)
I suspect the machinery wasn't actually given to Sorge, but only leant so he could get the work done. Probably didn't really cost them that much.

Afterschoolsports (Aug 13, 2021 at 8:20)
Me. I have a backhoe, am about to buy a skid steer or track loader, and a 9t excavator. I will probably go with jcb and kobelco though. This marketing is great because you may not want or need this now but you will see a contractor giving you a quote using it and think about it. Or you might need to hire something. Kubota also sell a lot of engines that go in small equipment like pumps and mowers and side by sides. At the end of the partnership, Kubota get their machines back without the massive wear and time on them that construction incurs, they will probably sell them as demonstrators.

luckynugget (Aug 13, 2021 at 10:31)
I am looking for equiptment to rent/buy for our bike park. There's tons of bike parks in the world, all need machines to build with. This is also noce and differant from just another miserable worksite for a scene to market equipment. I know you think excavators are a niche product, but anywhere you go, there will always be an excavator sitting somewhere working on something. This is dope that Kabota wanted to help Kurt out with this awesome project. Take your negativity and shove it up your ass.

Afterschoolsports (Aug 13, 2021 at 10:51)
@luckynugget: yep. The people who buy and operate these machines like rad stuff so having this in their marketing materials definitely makes them standout against the usual images and scenes.

endurogan (Aug 13, 2021 at 19:50)
@luckynugget: I dont think it was a negative comment probably just isnt aware of how many people own their own heavy equipment

ThunderChunk (Aug 14, 2021 at 19:39)
I dunno what it is about mountain bikers being attracted to heavy machinery for a career. I'm not referring to kurt sorge, he's obviously using it for trail building. I'm talking about bikers in general (including me). I swear half the people I've met at work ride bikes. None of them are trail builders, strictly civil construction. It's not uncommon to roll up to a job site and see tail gate pads on all the trucks lol

Stonerz94 (Aug 13, 2021 at 1:14)
I'm genuinely curious: do they have some kind of formula when building those super big jumps for how long and big the landing must be in ratio to the take-off ramp, in order not to case it, or do they just go by their feeling when building them and then really just guinea pig that brutal stuff?

Afterschoolsports (Aug 13, 2021 at 8:21)
They’ve been doing it for long enough they know what works but the Lee likes bikes link gives you lots of great information.

Sshredder (Aug 13, 2021 at 13:58)
That skid steer would be much faster with a longer reach. Bucket angle needs to be slacker. Other than that climbs like a mountain goat digs like a skid steer.

nicolassherbrooke (Aug 16, 2021 at 5:04)
Been building trails with a Kubota U35 and a U17. Super reliable, no non-sense options only what's needed. Impressive build quality.

hubertje-ryu (Aug 13, 2021 at 1:03)
I have a pretty big yard for where I live. Not sure whether I can fit even one of these landing mountains, though.

pourquois-pas (Aug 13, 2021 at 4:51)
The soil looks amazing to work with for jump building! Running diggers is so satisfying.