Video: James Doerfling Rips Through the Ashes of a Forest Fire in his Reverence Section

The movie script we had for James was to take the viewer through his psyche on how he goes about his business riding big lines and pioneering new big mountain terrain. We started filming with James in the Spring of 2017, and captured what turned out to be some epic riding accompanied by getting a rare glimpse of his mindset on how he tackles fear. The script for his next part in the movie was to set up at Perkins Peak in the heart of British Columbia's Caribou region to ride fresh terrain that promised multiple first descents on big terrain. Two weeks before filming, devastating wild fires started to pop up in the BC interior which progressed into the worst forest fire season in BC's history.

Multiple communities needed to be evacuated including Williams Lake where James calls home. At one point, the crew tried to get into Perkins, which was not impacted by the fires, but road closures made it impossible to access. The fires came to pass, residents of communities were allowed to return to their homes. James was fortunate that he did not lose his home, others were not so lucky. While recalibrating on the game plan to film his next segment, James had the idea of a "Burn segment" after visiting one of his favorite trail riding zones that were decimated by the fires. What he found was unexpected and provided a different way to look at natural disasters. What ensued was an epic landscape and storyline that our team was able to capture. Hope you enjoy!

We're in the middle of another summer. Most forest fires are caused by carelessness. Stay safe out there folks!

Reverence Movie is available in 4K at http://geni.us/Reverence 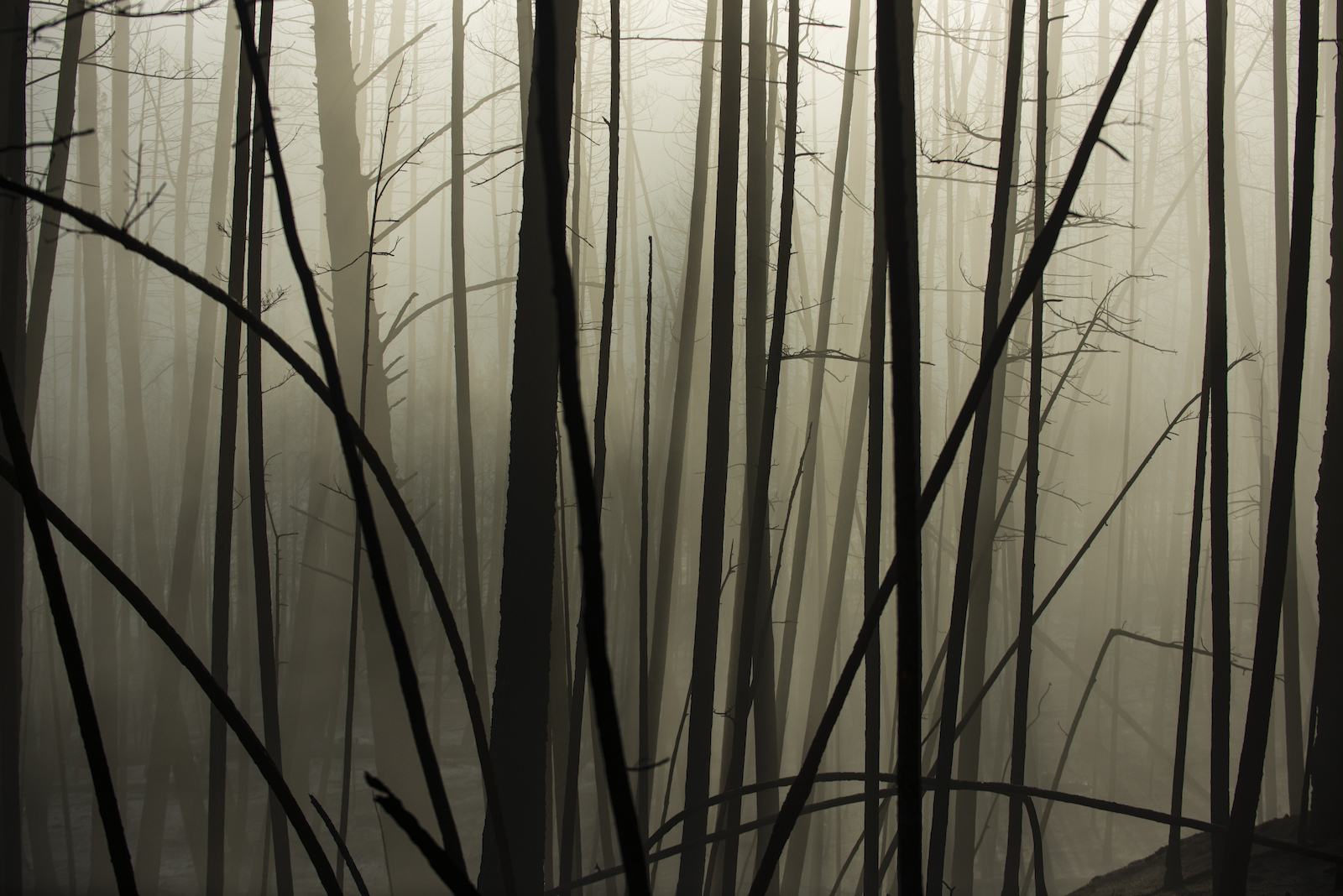 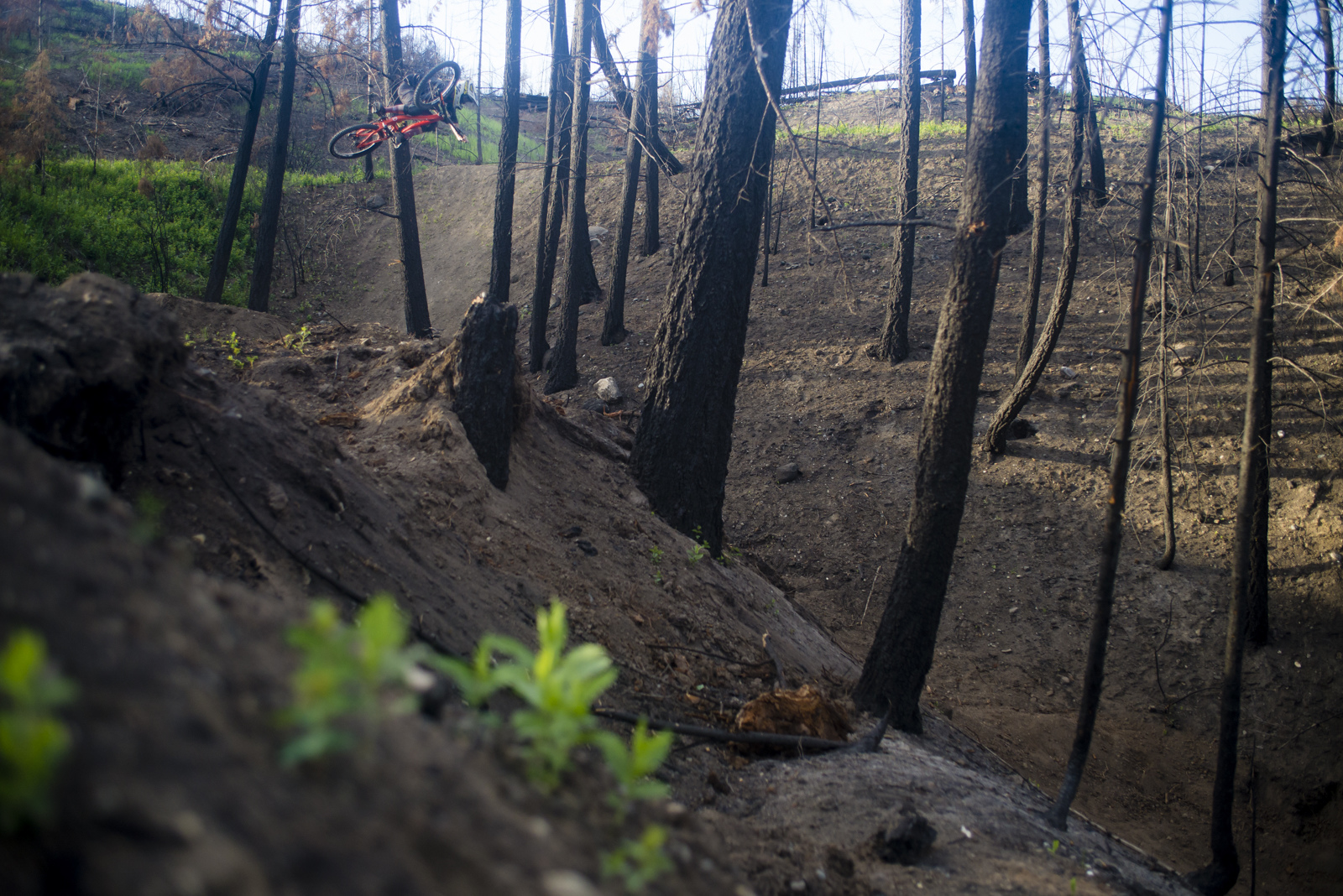 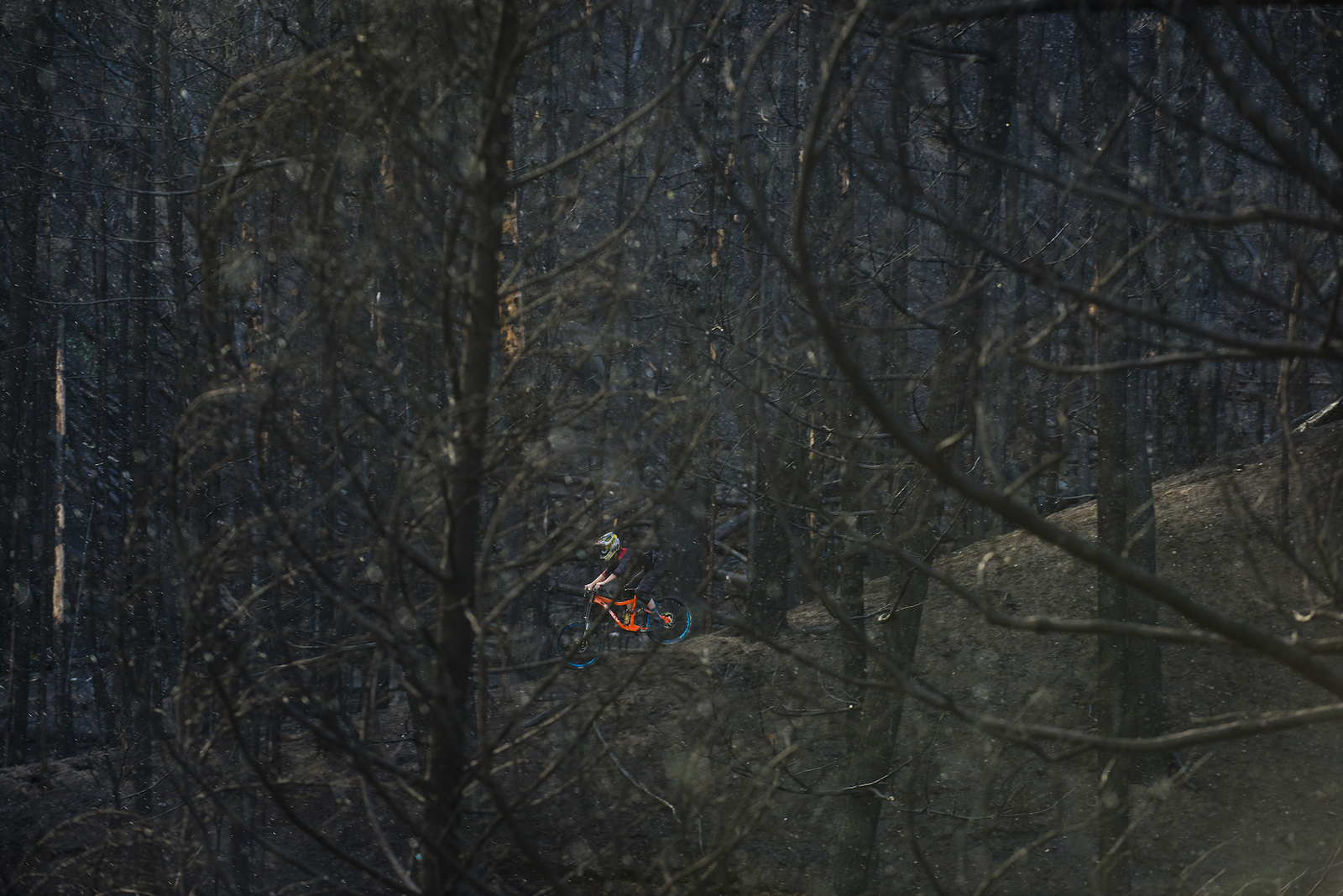 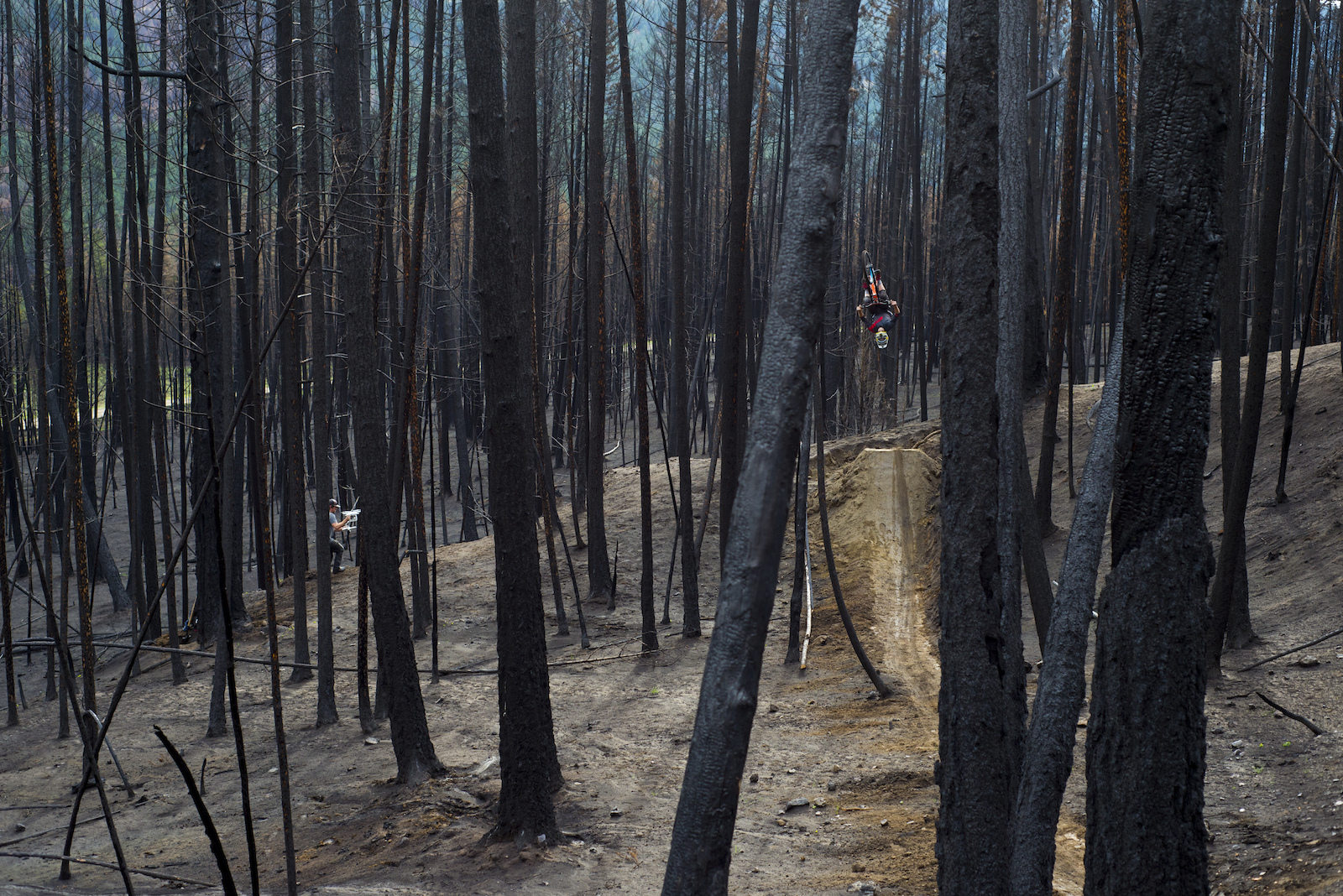 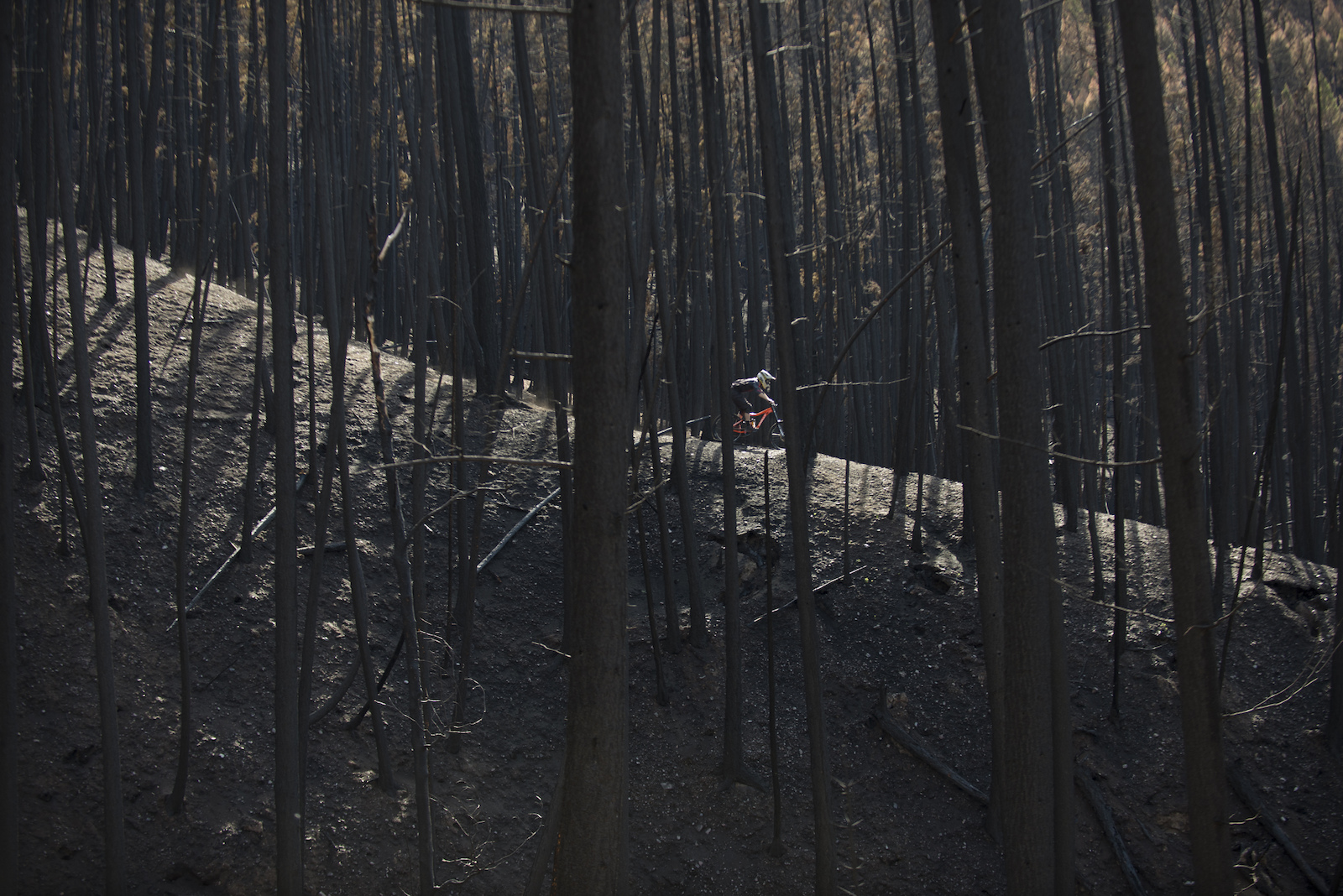 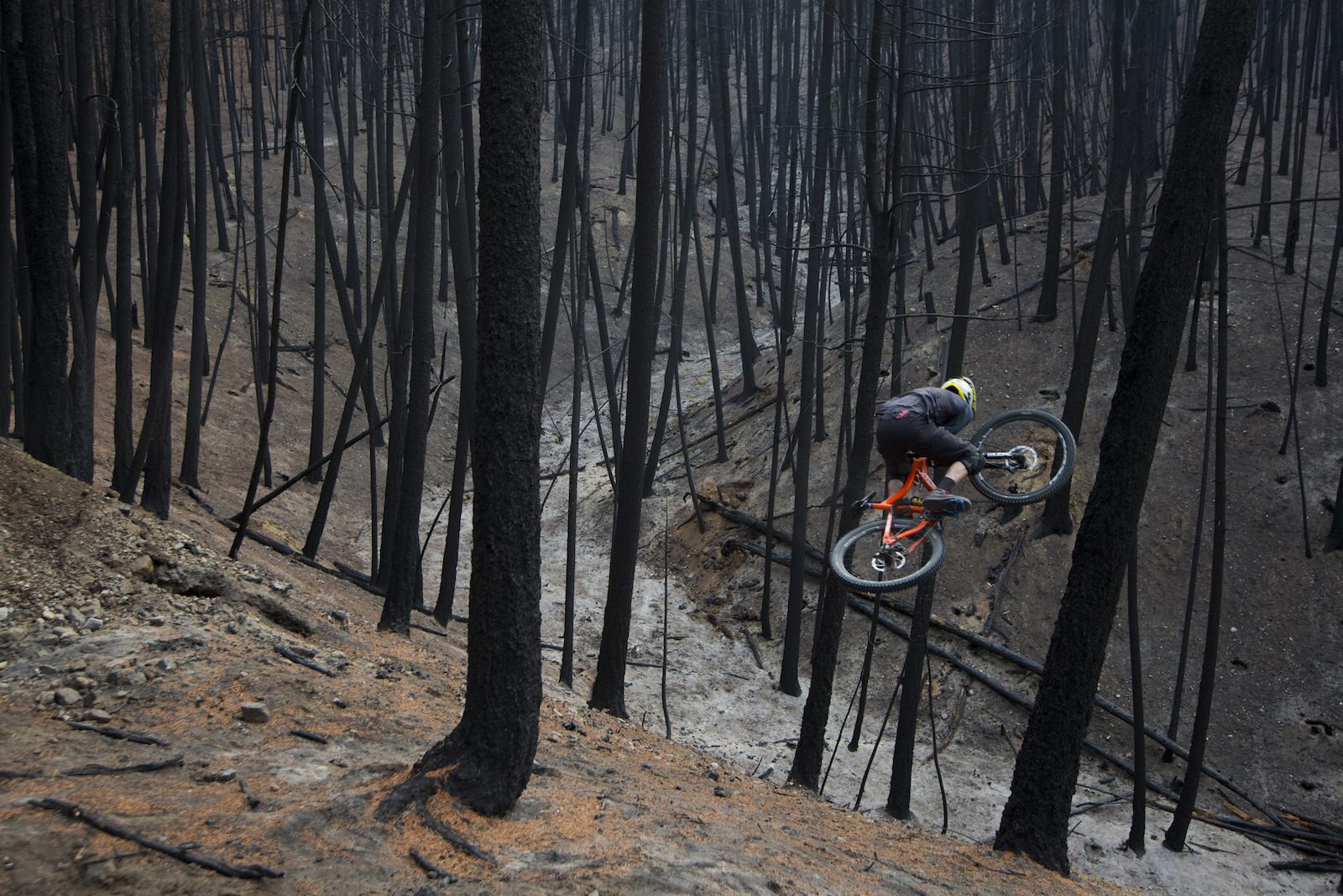 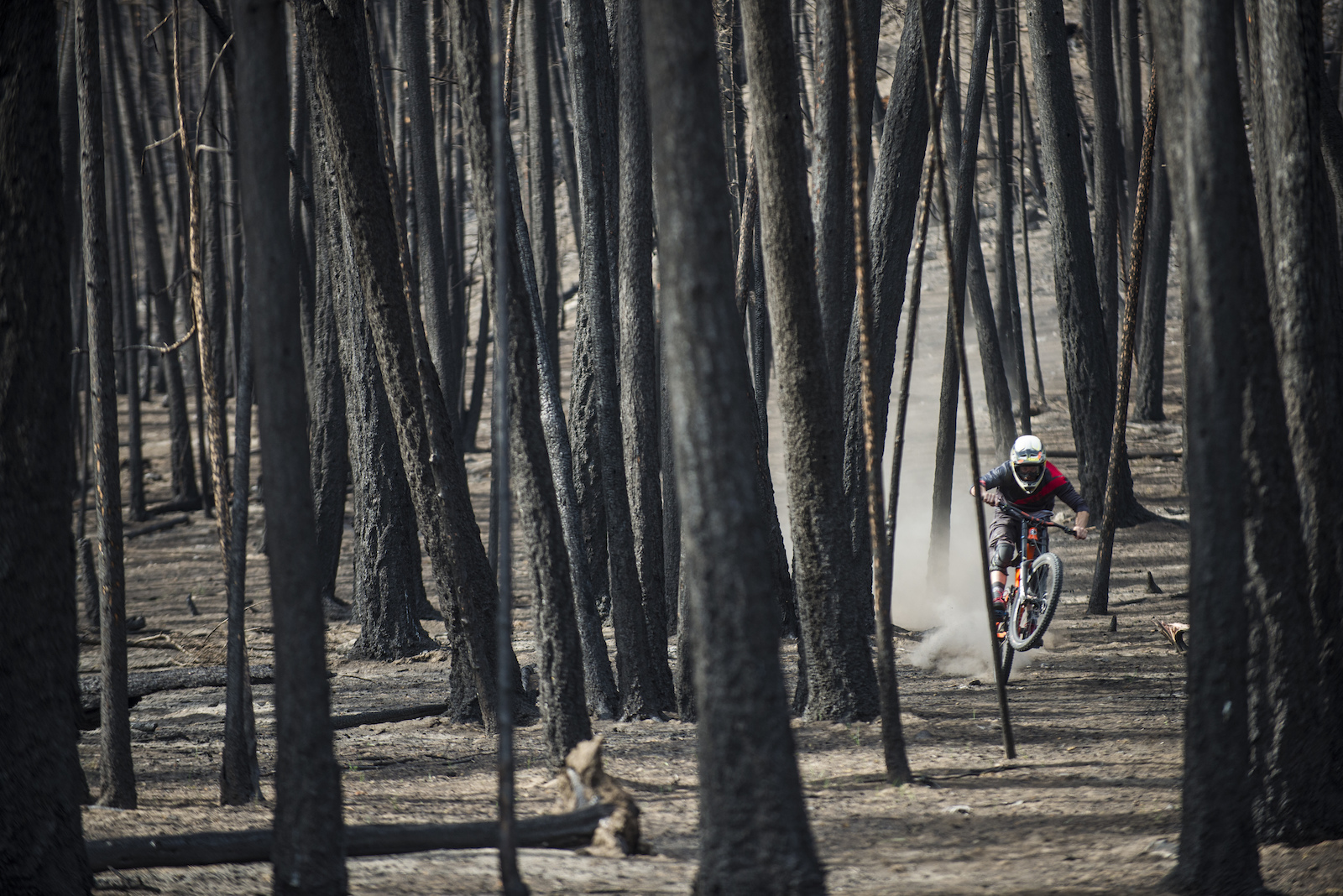 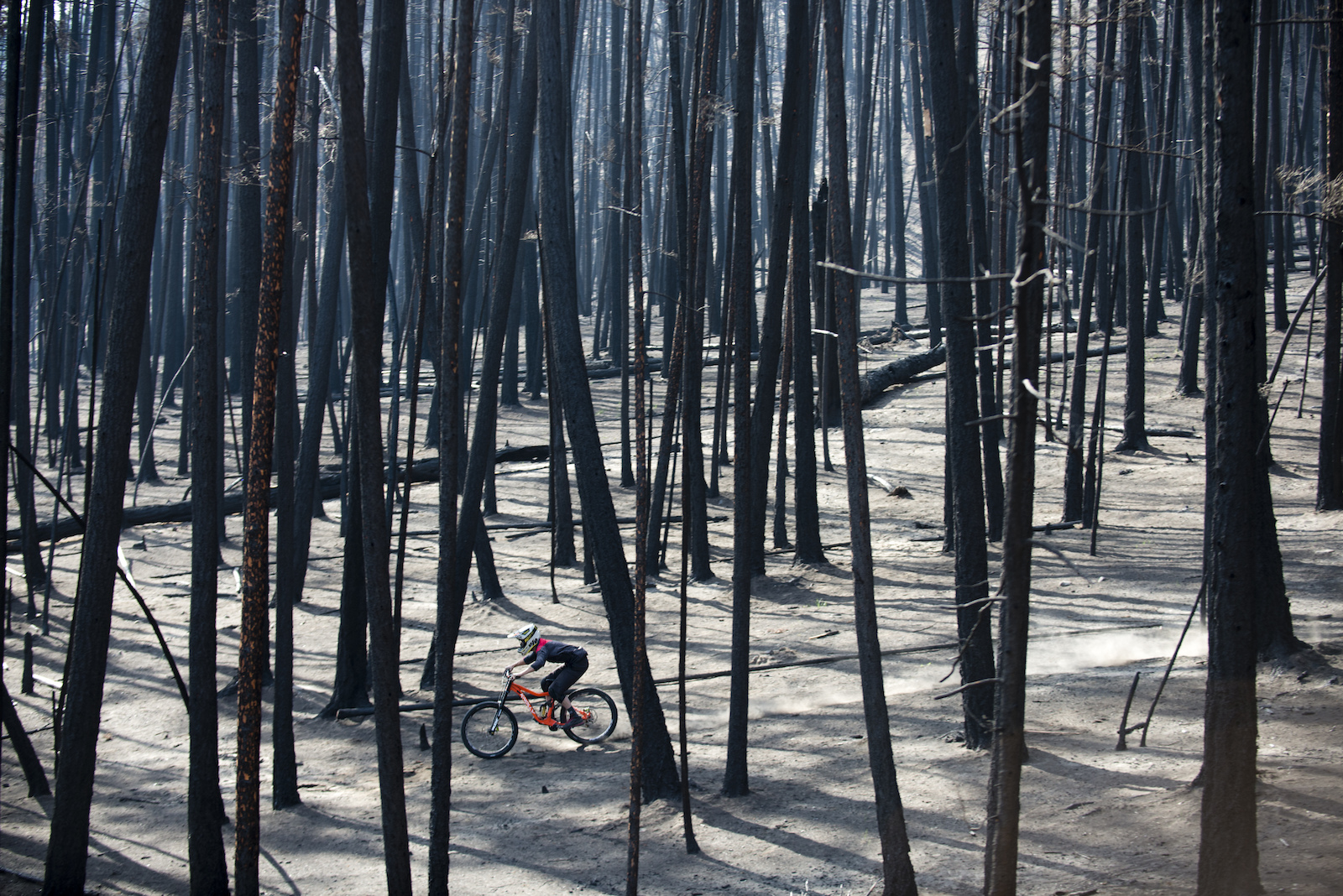 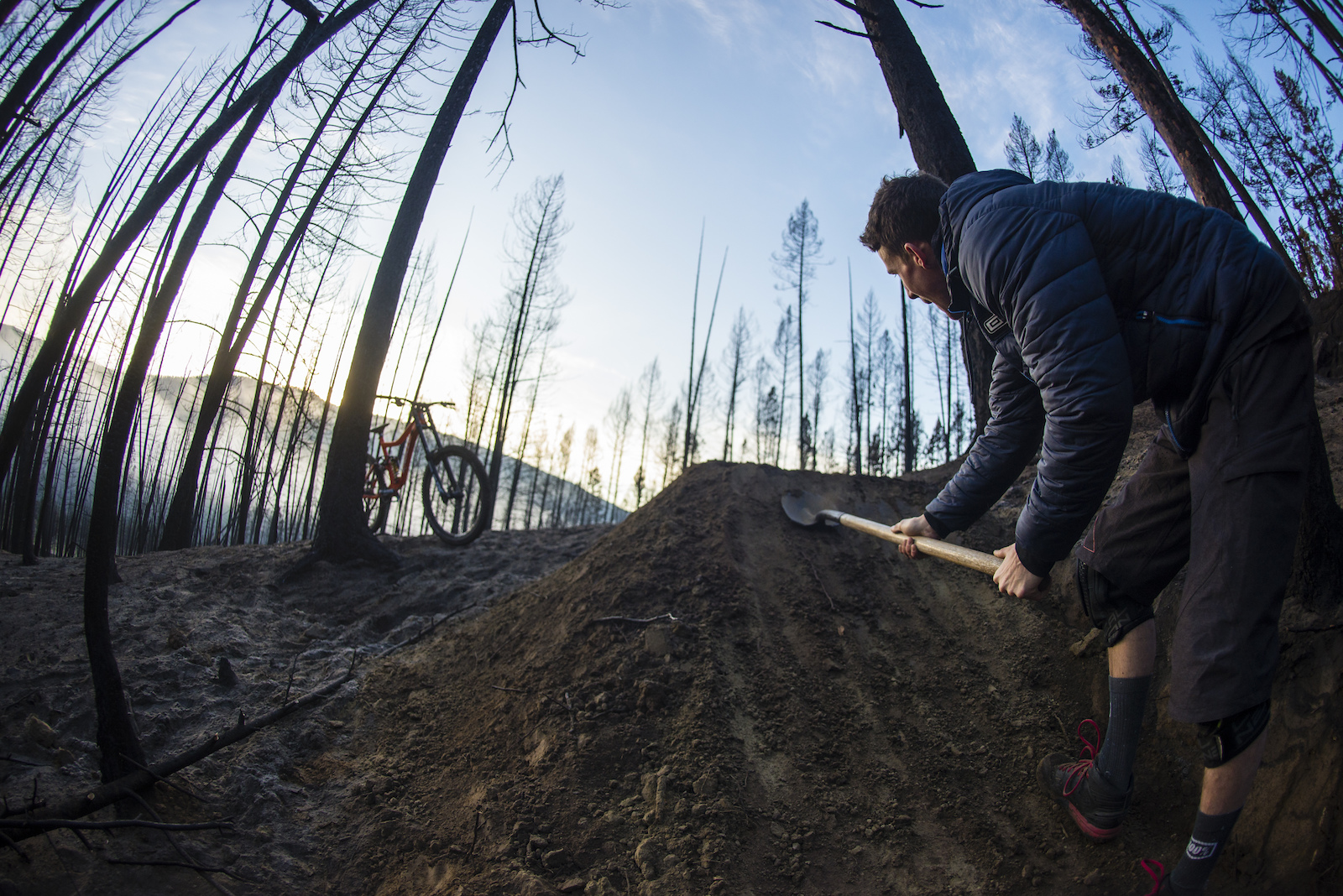 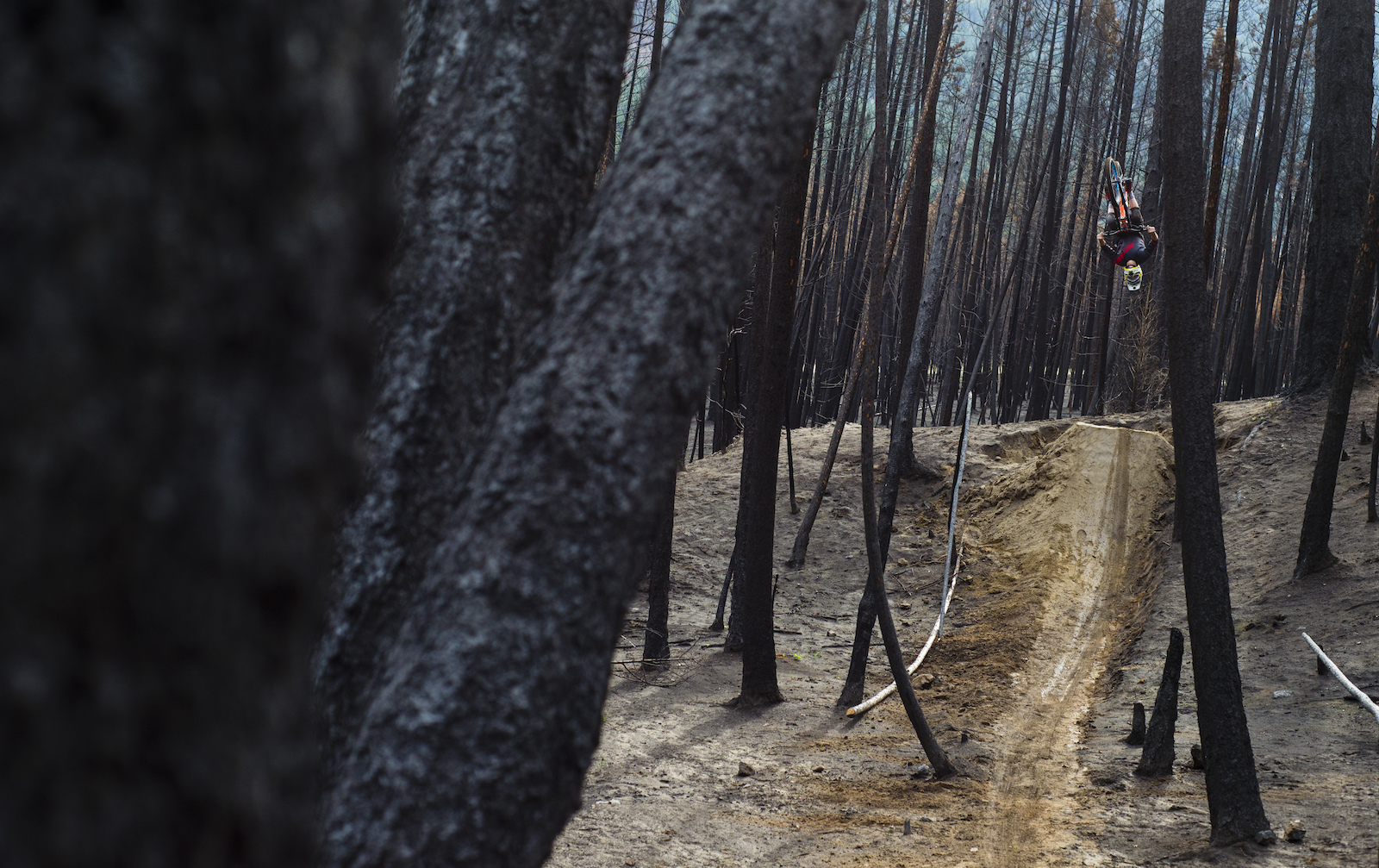 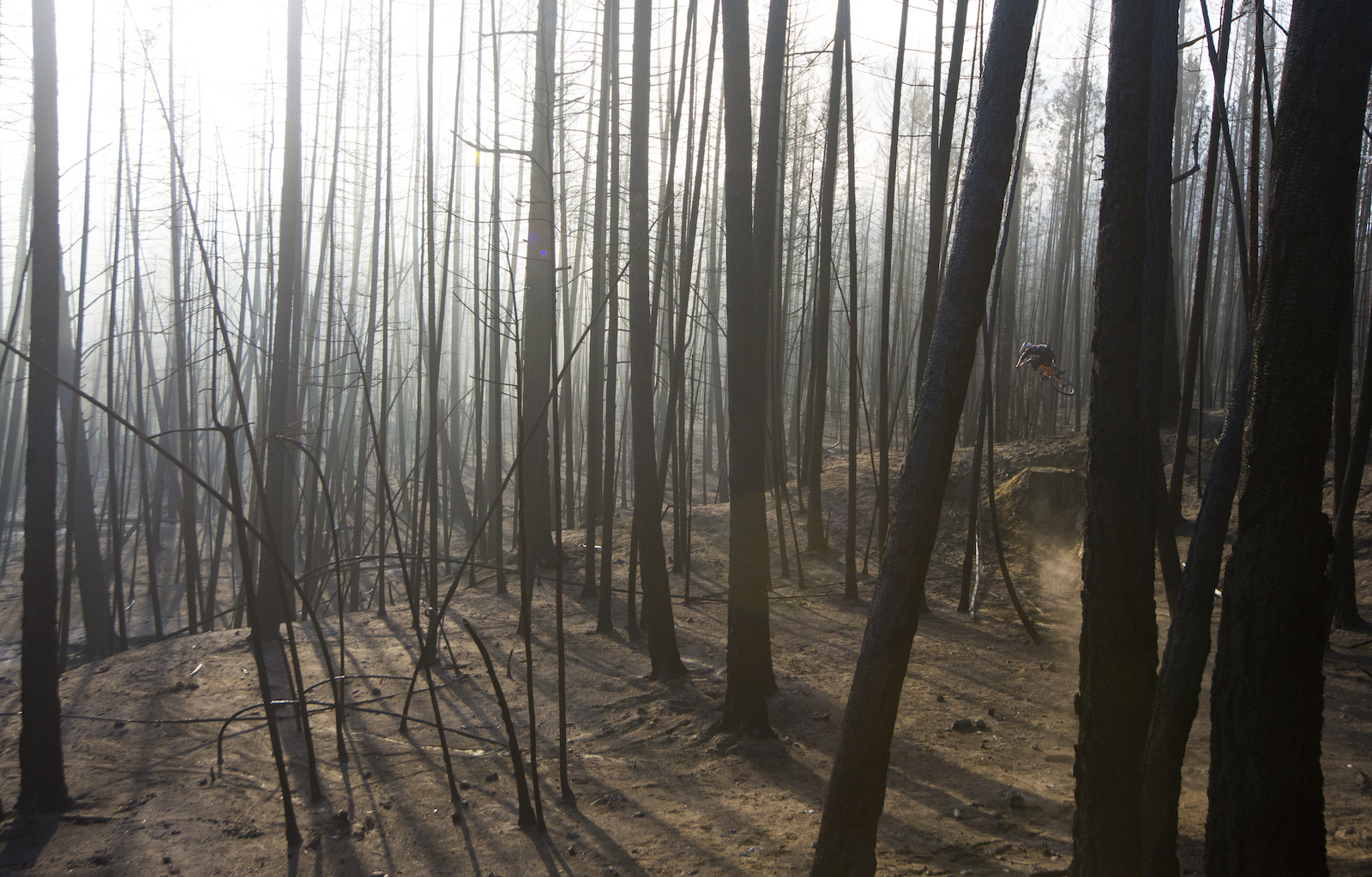 Reverence (Jul 23, 2019 at 7:38)
@mobil1syn: Appreciate the comment. We set out to tell a story a bit different that the community and general public could wrap their heads around. Was amazing to see how each athlete interpreted fear and how they manage it through the film.

Muk-Muk (Jul 23, 2019 at 19:26)
Thanks for the Colter Wall name drop. Just spent 4 hours listening to the rest of his catalogue and the other 20 hours trying to wrap my head around the depth of voice and soul that comes out of that baby faced ginger.

Svinyard (Jul 22, 2019 at 16:51)
Coming from a 60yr forestry family, that kind of fire does NOT rejuvenate the area. That's anything but a natural fire which would not crown and burn that hot. Natural fire would be a low burn removing the fuels on the bottom of the forest and not be anything near that hot. Its not just the trees that are lost, it's the soil too that is truly devastated from something that brutal. When you remove one of the most critical survival elements of a forest, it's no longer natural. Tree densities go from 40 per acre to 3000. Then the bugs and disease come in just like any over-populated environment. Drought tolerance is entirely lost and the amount of fuel in that forest hits insane levels. And then everything dies

CarbonShmarbon (Jul 22, 2019 at 22:31) (Below Threshold)
Oh the drama.
Get off their case over one line in a film that was well intentioned if not precisely accurate.
And oversimplified; maybe, but sooner or later ash=fertilizer and environments balance.

Svinyard (Jul 22, 2019 at 22:55)
@CarbonShmarbon: it's different when you get the evac notice on your house and have to move your kids out. Drama indeed.

No excuse for you to be ignorant to the effects of these unnatural high intensity fires. It takes decades for this to recover.
www2.nau.edu/~gaud/bio300w/frsl.htm

kookseverywhere (Jul 23, 2019 at 0:14)
@Svinyard: Decades seem long to a human, but is a very small amount of time for a forest. This ecosystem will rejuvenate, even the in following spring it will look very green. While these fires are devastating, saying they are unnatural is a lie (however there have been more of these hot fires lately, but they've been happening in BC interior for hundreds of years). Fires of all categories started by lighting strikes are completely natural fires.

Svinyard (Jul 23, 2019 at 1:49)
@kookseverywhere: Look I've fought wildfires and been around private timber management of hundreds of thousands of acres nearly my whole life. Call me a liar but dont ignore the science. The forest we see today looks nothing like it was 100yrs ago when it was natural. Man has prevented fires for so long, one of the most absolute critical factors of these forests. Its lead to the super intensity fires happening with incredible frequency. Of course there were always some catastrophic events but those were very rare because the fuels required to crown massive, resilient trees didn't exist. But this is not that and its obvious. The tree density is completely unnatural as is the bug kill and diseases the comes with it. Lack of those low intensity, healthy fires has led to this. Now instead of healthy fires we are constantly getting these catastrophic ones fueled by decades of unnatural fuels stored up at all levels of the forest. It's nothing new within the forestry community, it's just difficult to come back from without significant policy changes to how we manage our resources...which wont happen until the common public understands the reality behind it, which is hard because decades of failure looks like just a bunch of trees to most people and lightening has always started fires.

jeremiahwas (Jul 23, 2019 at 12:01)
@Svinyard: Man excellent comment. Not PC of course because it’s full of truth and reality. I wish the forest community had a platform to educate people. I’ve heard this reasoning before but it’s not what you hear on the news - devastating forest fires are 100% because of our allowance of fossil fuels and cow flatulence and have nothing to do with us putting out every single spark of what would be a natural, healthy fire. Now we have these super-fires and are told they’re going to get worse unless we ride our bikes 50 miles to work, eat cricket-burgers and put gas-capturing butt-packs on all the cows.

joe1989 (Jul 23, 2019 at 22:00)
Preach it. No one seems to talk about the unnatural state of our forests. Its all about climate change which I'm sure isn't helping but the real issue is that we have been "managing" (raping and pillaging) our forests for over a hundred years. This won't end well....

cougar797 (Jul 22, 2019 at 19:56)
Everything doerfling is in is sick. He’s just got this pinned out go big style plus this laid back backcountry attitude. No groomer edits just out in the woods or on the bluff face sending it old school natural and raw style.

KNOLLYBIKES (Jul 23, 2019 at 11:07)
It's so great to see this clip pop back up onto the page and for us to watch the video again. James absolutely destroys and we love watching him do his thing. Thanks to Ambrose and the the Claws for catching it all on film. It seems every summer that another community in BC is threatened by a big fire and many people loose their homes. Hearing of so many people be told that they have to leave their home was tough news, and it has happened in so many other town outside of BC as well from Fort Mac in AB down to California last year. It's fire season kids, please be fire smart!

mojavehac (Jul 22, 2019 at 15:28)
Last time someone did a wildfire edit negative comments exploded about lack of sensitivity to a healing landscape. Not trying to say it is right or wrong, just that we are a little inconsistent in the comment section. In my opinion, the amount of earthwork that goes into any of the Fest Series courses is the most environmentally destructive on any Pinkbike news.

japgezzy (Jul 22, 2019 at 16:28)
exactly! I only came to the comments to see if it would have the same backlash or if every one is just a straight hater of the kid on the other edit. Looks like I was wright. Straight Haters!!!

mrbabcock (Jul 23, 2019 at 4:43)
Agreed. I’ve never really been into country music, but Colter Wall is something else. Definitely worth a listen for anyone who hasn’t heard him.

Hoser007 (Jul 23, 2019 at 10:28)
They call burned out trees widow makers for a reason. Glad nobody was hurt in making this video but it kind of sends the wrong message that it’s cool to ride in an area which is closed (for a good reason).

scotttherider (Jul 22, 2019 at 12:44)
Weird southern Oregon we did a race in a burnt area the next year. Sections of the north Umpqua were opened within months of a fire.

chacou (Jul 22, 2019 at 13:10)
in my experiences it seems like burn areas on public lands open up fairly recently after the fire has been extinguished and any evidence collection for investigation is complete. Maybe certain wildlife areas would be closed off for habitat remediation but I think that tends to be closer to water sources like ponds, lakes, creeks, etc.

showmethemountains (Jul 22, 2019 at 13:33)
It depends so much on the land manager. The Carr fire in Redding burned a lot of trail areas. The BLM land was inspected, cleared with volunteer help, and all open within a couple months. The National Park Service land that borders it is has been way slower to open, piece by piece. To be fair, those areas burned harder. But the NPS staff had a lot more to deal with than just inspecting the old trails so even accepting and coordinating volunteer help got pushed really far down the priority list

scotttherider (Jul 22, 2019 at 13:35)
@showmethemountains: that sucks! My guess on the north Umpqua was that is a source of revenue for our area.

Svinyard (Jul 22, 2019 at 16:58)
@scotttherider: They kept everyone out of the Eagle Creek burn for a long time iirc. Depends on the burn I'm sure and the soil.

scotttherider (Jul 22, 2019 at 17:24)
@Svinyard: I remember you couldn’t go to the top of Multnomah Falls or back into a bunch of those places after that come to think of it.

scotttherider (Jul 22, 2019 at 18:16)
@iantmcg: as far as the logging goes blm and forestry are why our fires get so bad because they don’t log them fast enough so all that lumber turns to kindling for the next fire. If it’s on private land(RFP, Weyerhaeuser, GP etc) it’ll be logged inside of a few months. Sorry just noticed the logging mention in your first post. The chetco bar fire last year blew up once it got into the scar from the Sour biscuit fire from a number of year earlier.

iantmcg (Jul 22, 2019 at 20:26)
@scotttherider: lol... I meant logging as in clearing the trees that fell across the trail and the ones that are within falling distance of the trail that are unstable.

BiNARYBiKE (Jul 22, 2019 at 11:06)
Awesome edit. Bummer about the fire but that makes for some very cool terrain and footage. Topped off with Colter Wall? Love it.

bulletbassman (Jul 24, 2019 at 5:59)
I was walking my dogs in these woods for decades and a few years ago these mtbers showed up and now the whole place is burned down!!!

Pilsburry-Snowboy (Jul 22, 2019 at 11:52)
The POV shots were so surreal, especially the first one, looked like something straight out of a sci-fi film.