On the back of shooting with Joel and Matt for the Status back in Summer, we were asked to try and do something cool with the fresh 2021 Stumpy Evo. Any excuse to get out and shoot with those boys and I’ll be there in a jiffy. Start with the South West’s finest Joel Anderson, add in every riders favourite rider - Matt Roe, and finally throw in youngster and 2x British schoolboy 125 MX champ Preston Williams and you have a trio of amazing bike handlers. A strong little roster for Specialized from an array of backgrounds.

We wanted jumps though, lots more jumps. Matt Roe actually dug a fresh new line in the digger about 4 weeks prior up at Redhill specifically for this video (14 hour days kinda job) but we got shafted by the rain a few days before shooting, sadly rendering most of it unusable on the soft, sandy hill. But, we persevered and had a few cheeky back-ups including the insane work of the Dustyhuckers and their jumps hidden away in the South Wales Valleys. Along with a few pinned turns, wall rides in the Forest of Dean and sunset jump session, we got her done before the UK Autumn hit hard. 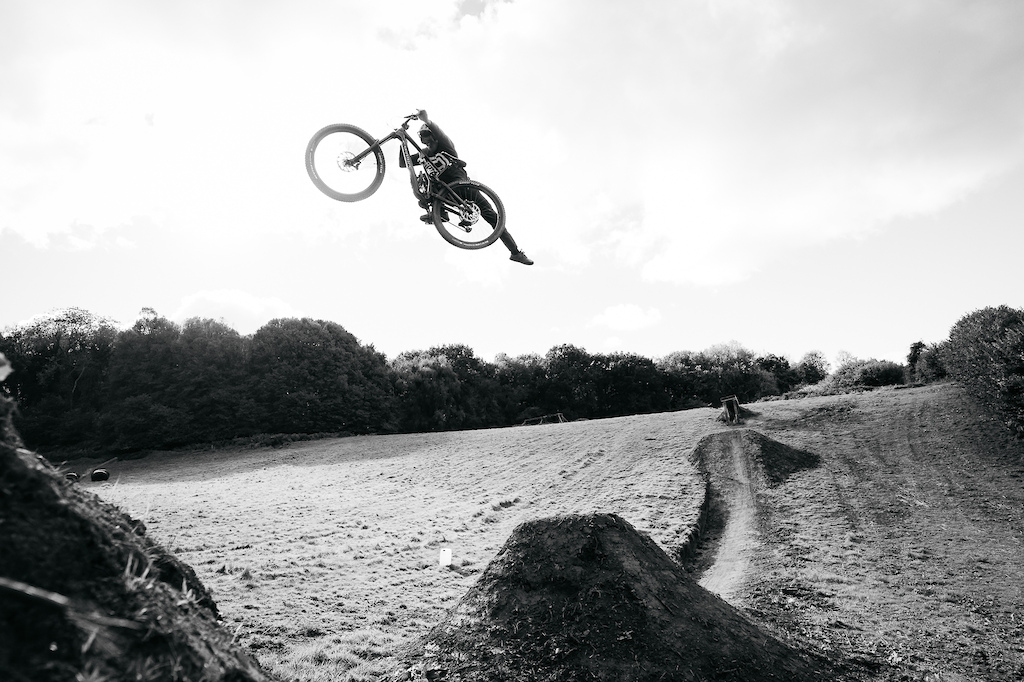 Joel stretching out a big nac for photographer Ian Lean, the banger machine. This is quite the line of jumps hidden away in the Forest of Dean. A little bird told me they might be available to the public soon, too. 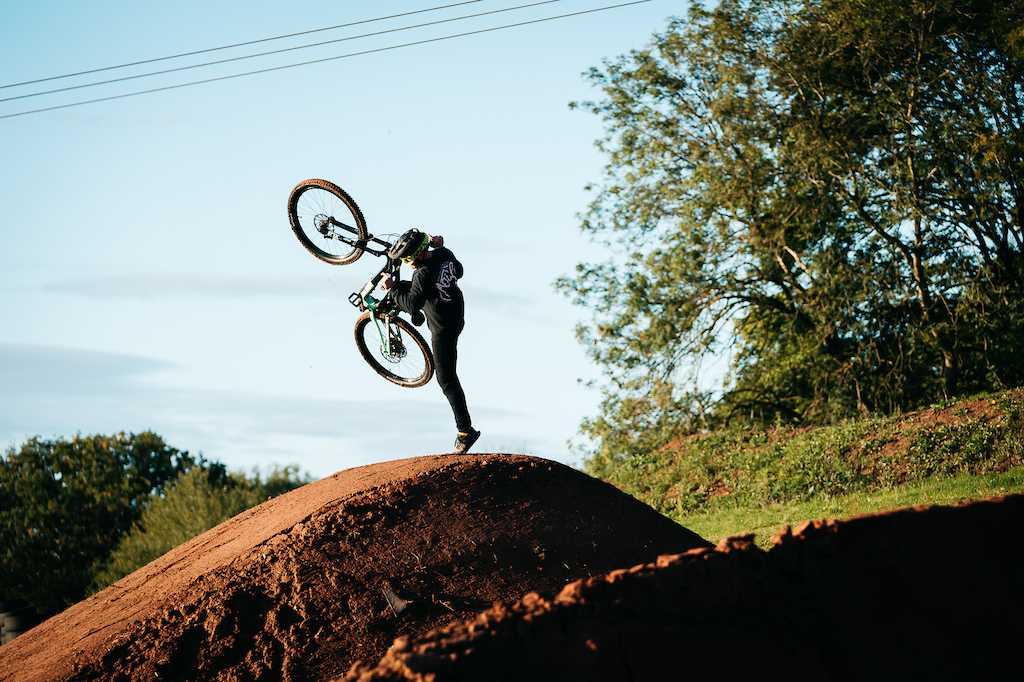 Loves a good fast plant does Matt Roe.. Over the lower scrub bump on the freshly built line pretty early in the morning sun. 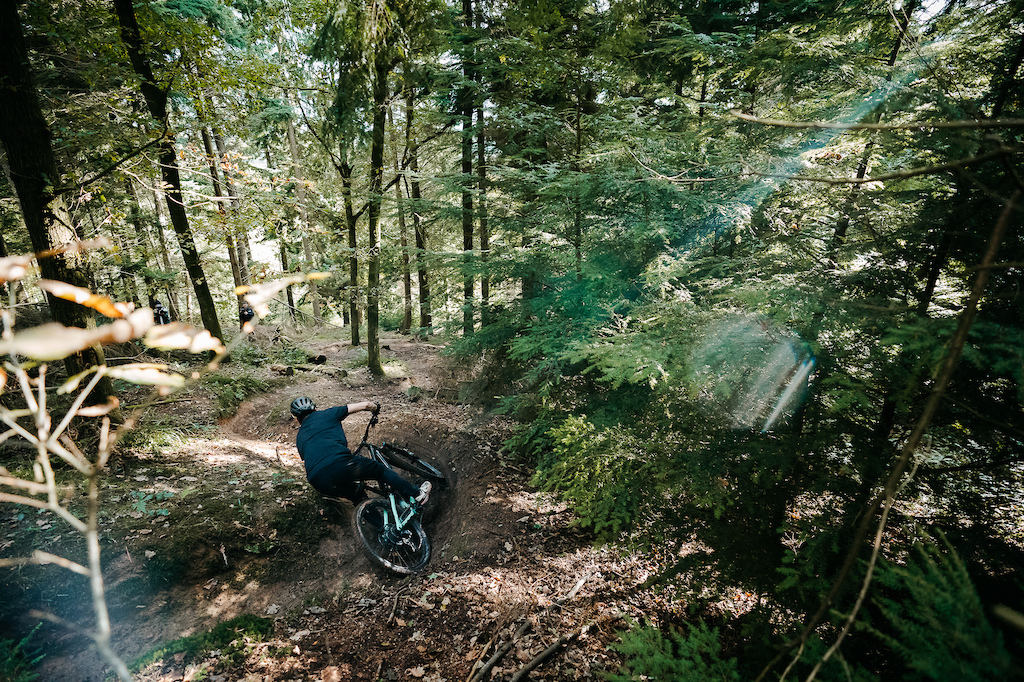 Preston Williams leaning her into some deep rutted turns over by PedalABikeAway. Check the video out and see him go full ejecto seato in this turn, and then nail it next run. 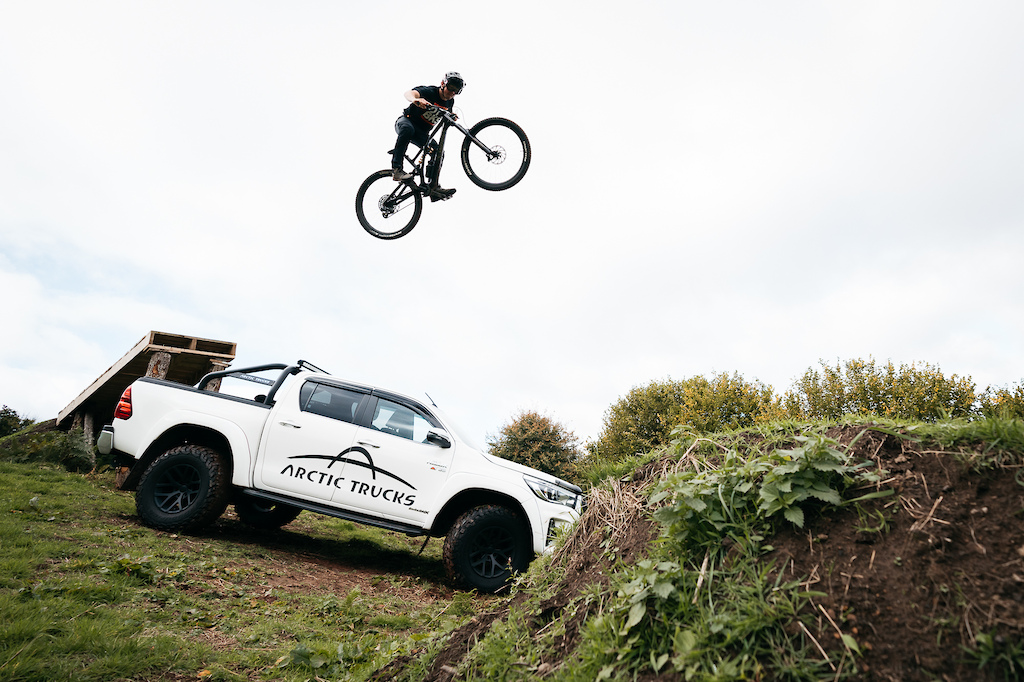 Joel pulling shapes over our posh uplift vehicles for the weekend, kindly provided by Arctic Trucks. They drove down from Scotland to come and help us out, so a big thanks to those chaps for getting involved. Keep scrolling down to see the Hilux in action. 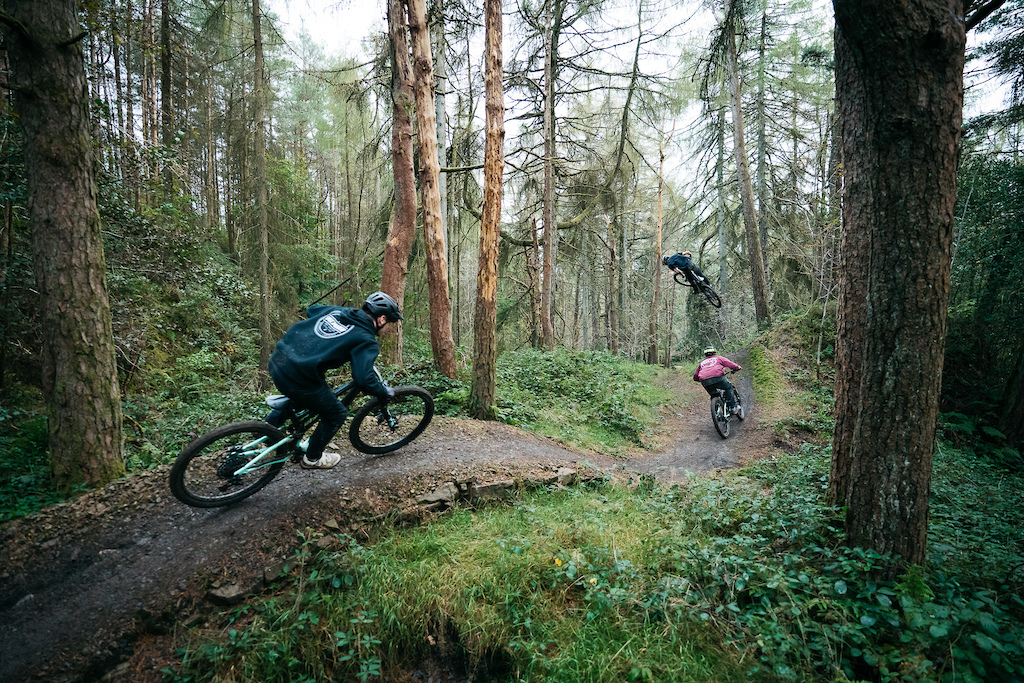 The boys rolling through a finely crafted line on the way into the big boy jumps at the Dustyhuckers compound. Daunting at first, and I certainly wouldn’t hit them, but once the lads had gotten through them they were buzzing. They also got the Matt Roe seal of approval.. so you know they’re of supreme quality. 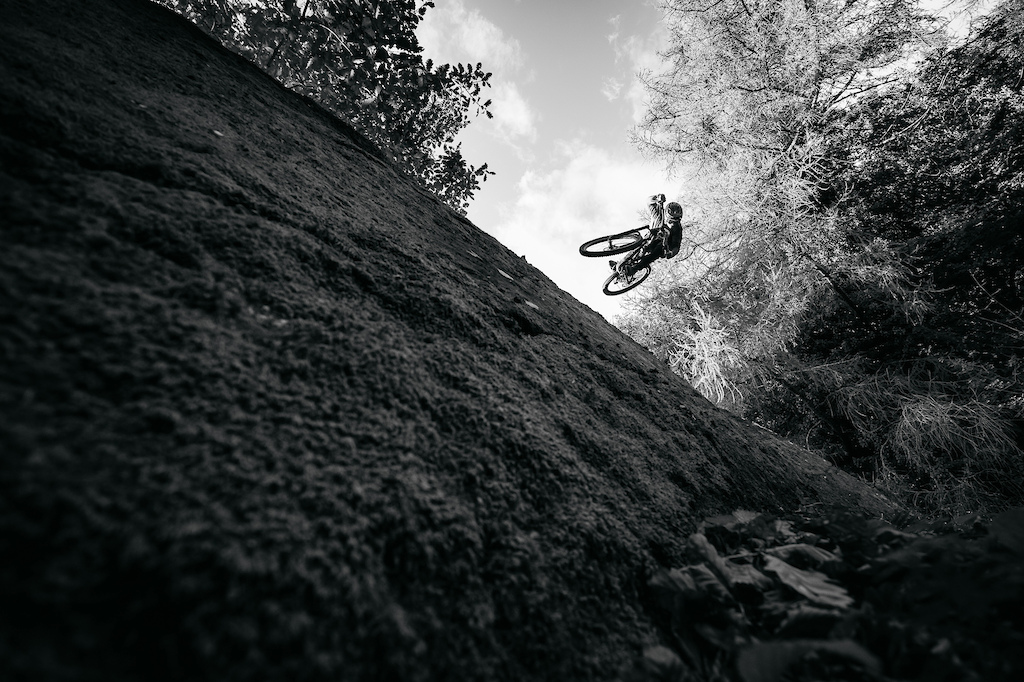 You may have seen lots of boys hitting this natural wall ride as of late, it’s a right cool feature you can ride right up and pop off the top. It’s certainly something a bit different. 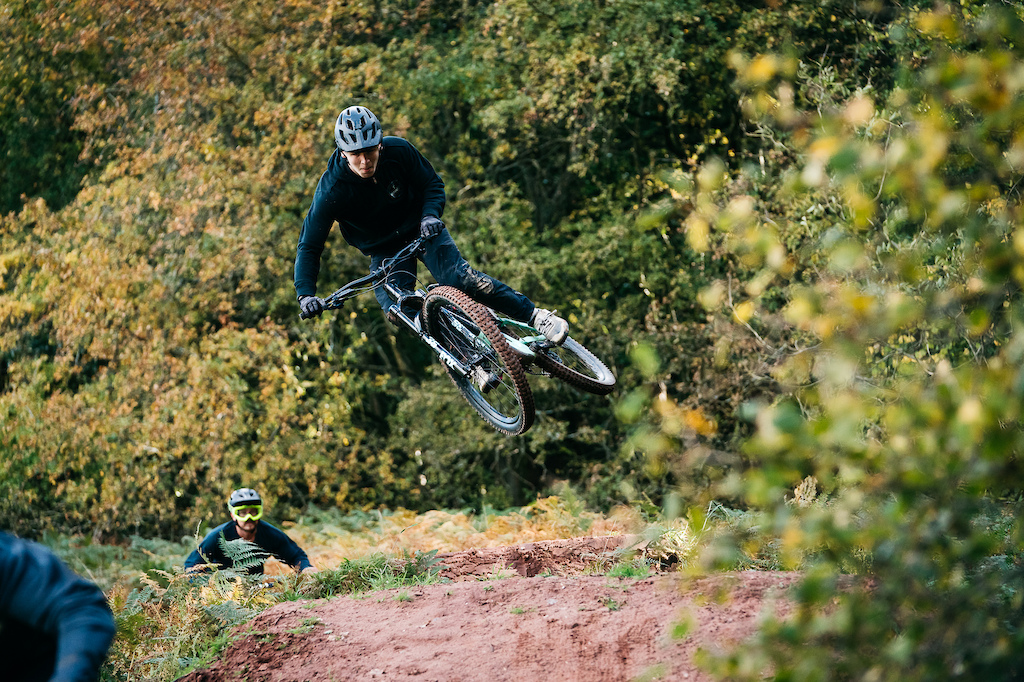 Preston throwing some style mid-train on the way through to the jumps. 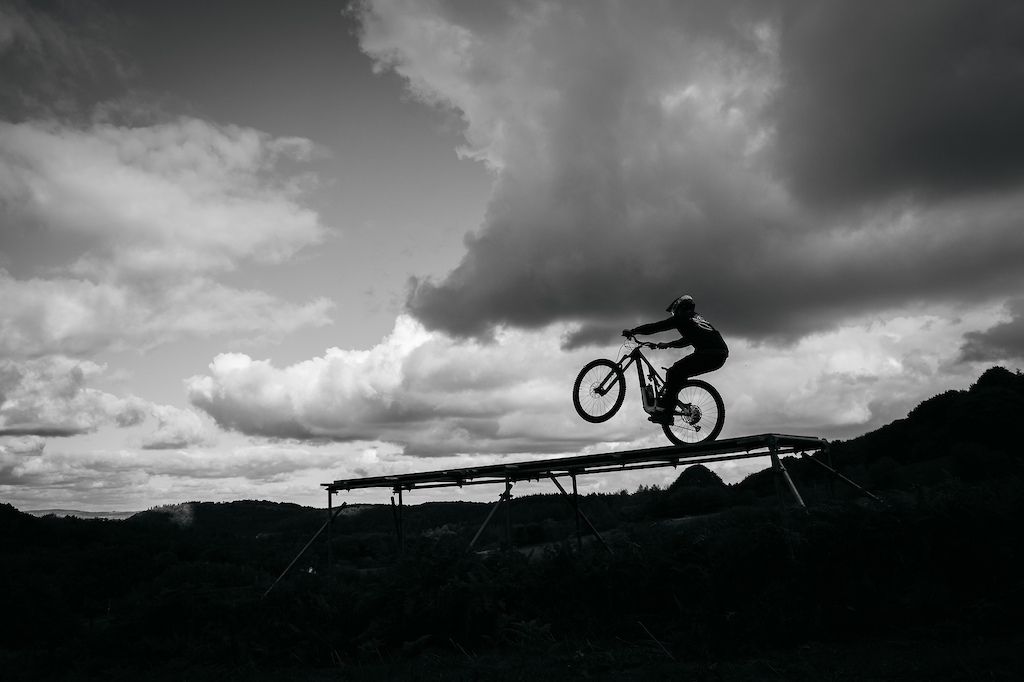 The scaffolding manny pad, demonstrated flawlessly by Matt and looking ominous below the threatening clouds. 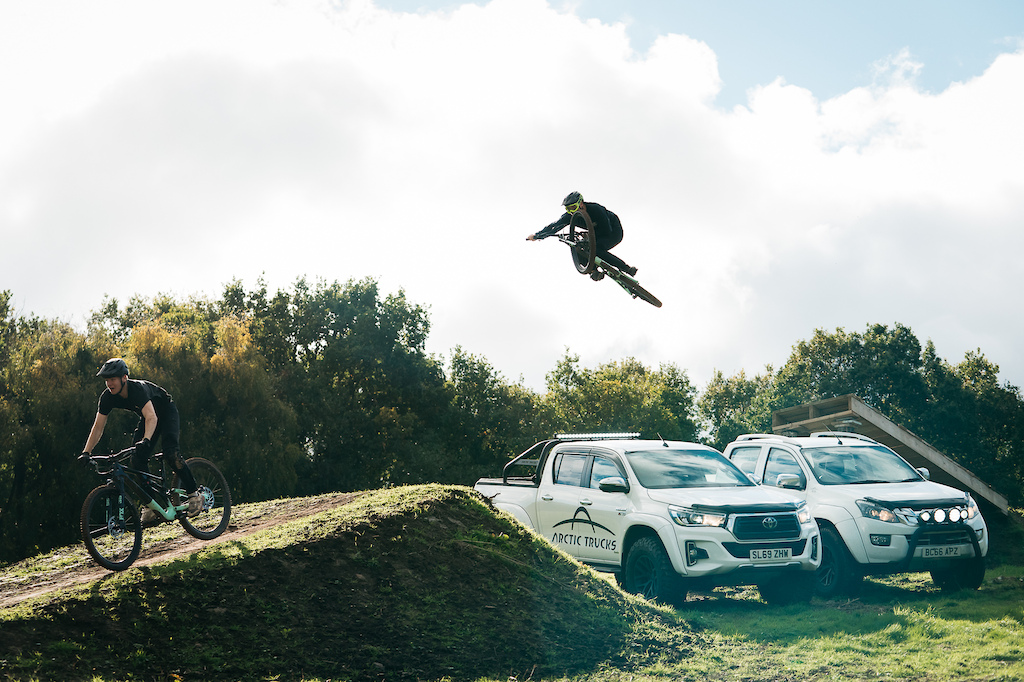 More trains over the trucks once the wind had dropped. 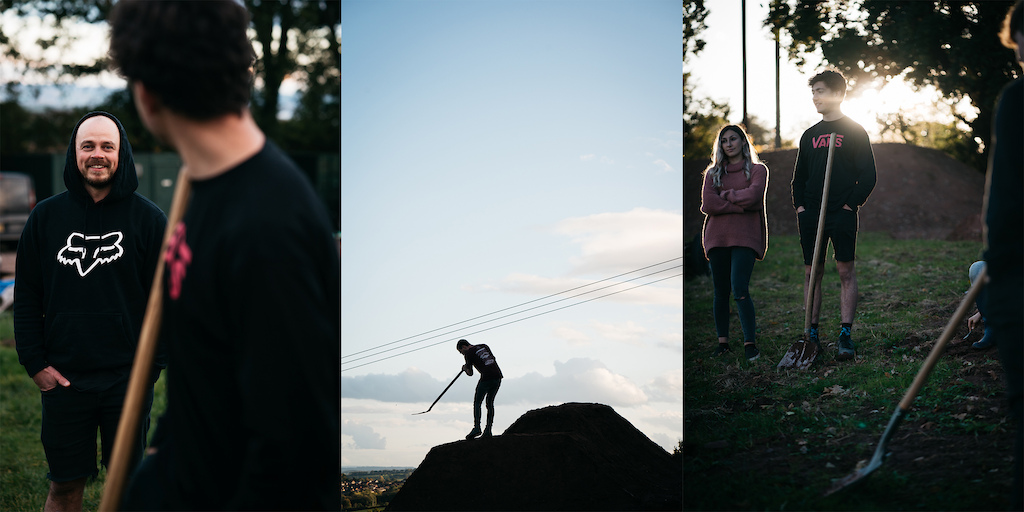 The unmistakable shiny bald head and northern grin of Matt Roe. Along with digging, and lots of it, trying to make our Redhill jumps work - but it was to no avail. We then realised we were trying to film jumps in October. 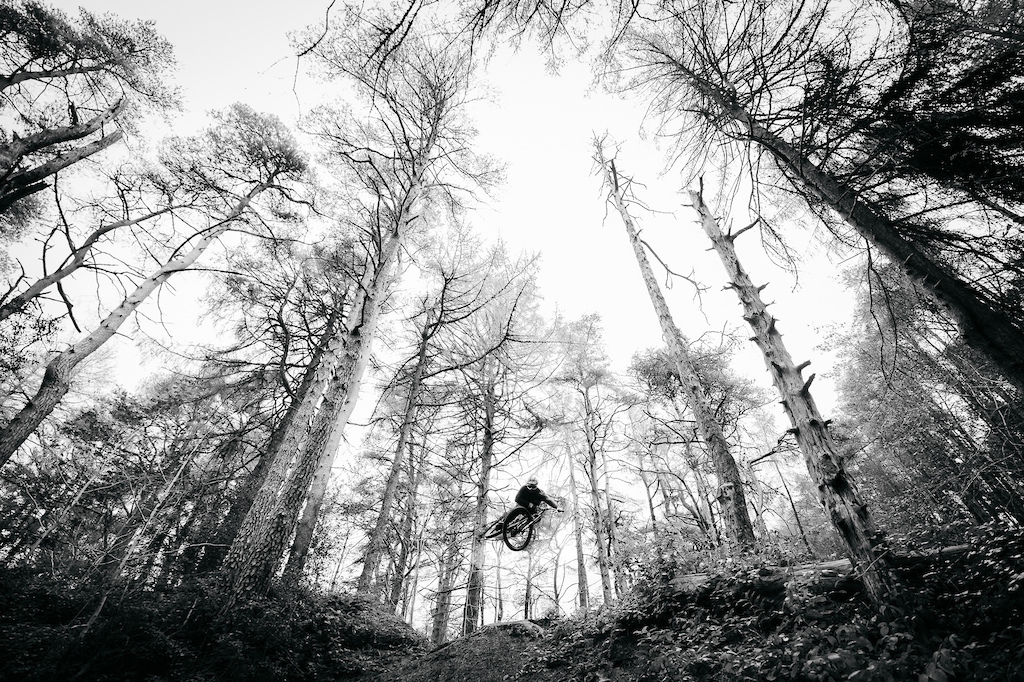 Matt on the setup step-down into the Huckers jumps, put into perspective by the spooky looking trees. 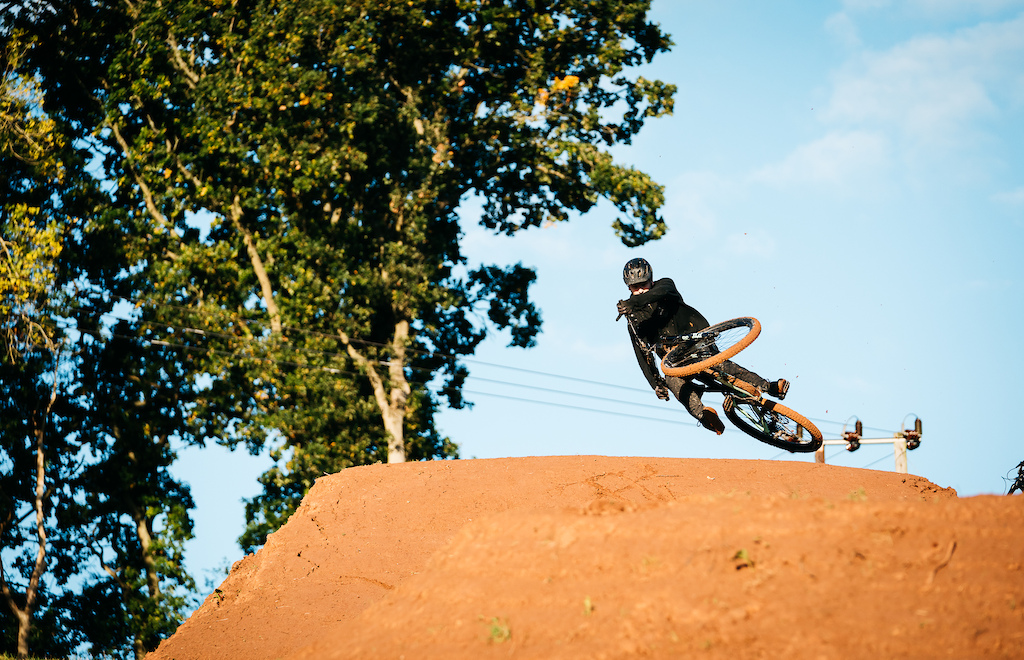 Preston throwing shapes over the scrub bump. You can’t forget this lad is 2x British Champ in the schoolboy 125 category and is probably familiar with a good scrub or two. One to watch in the future of downhill after a few good junior results in recent world cups (9th & 13th). 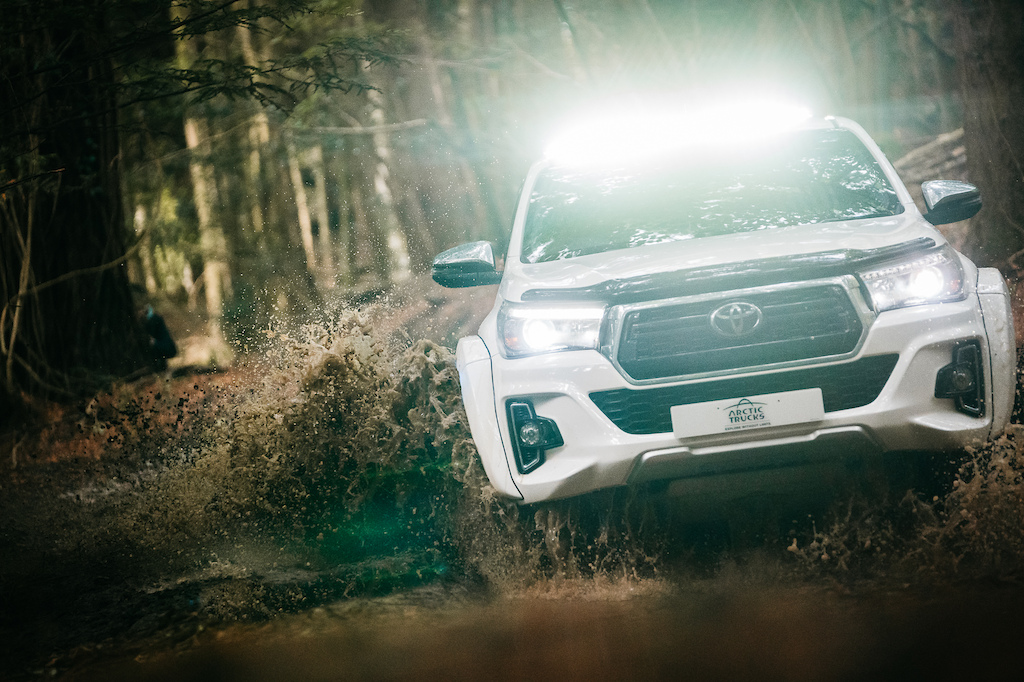 The Hilux in action deep in the woods on uplift duty. 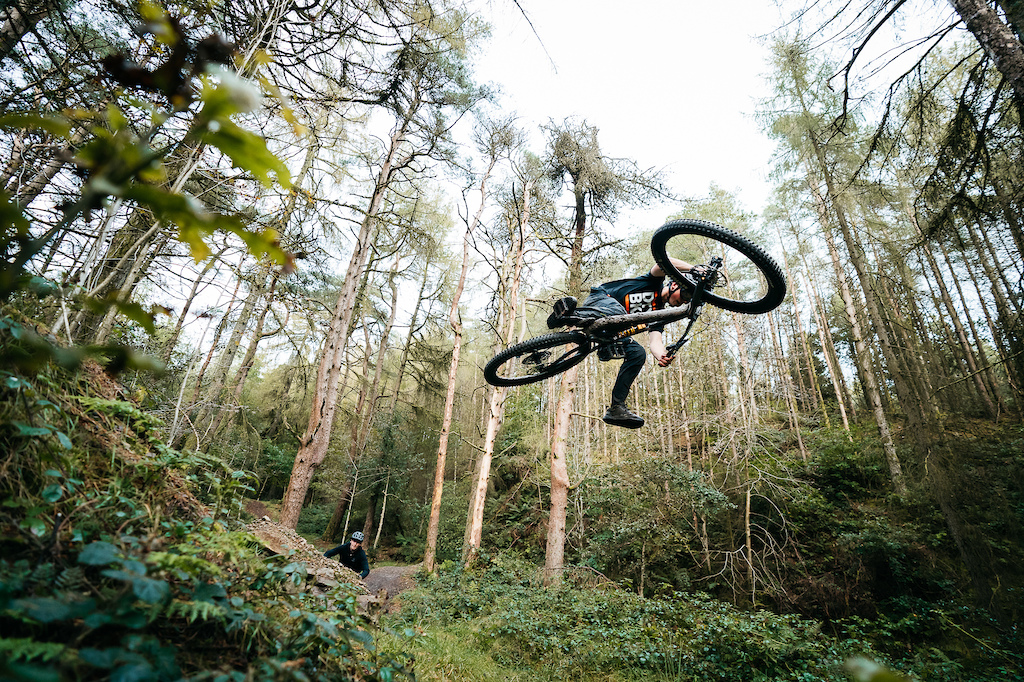 Joel’s foot keeps falling off in the air? 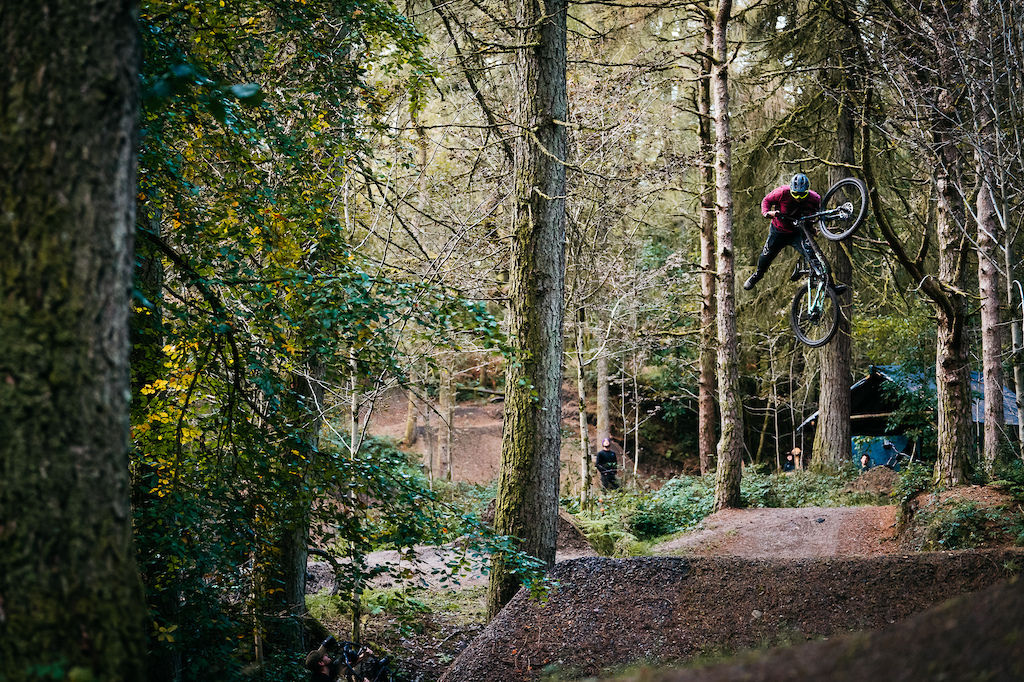 The ‘griz’ from Matt. Kind of like a one foot, kind of like a nac. A signature style transferred from BMX to MTB. 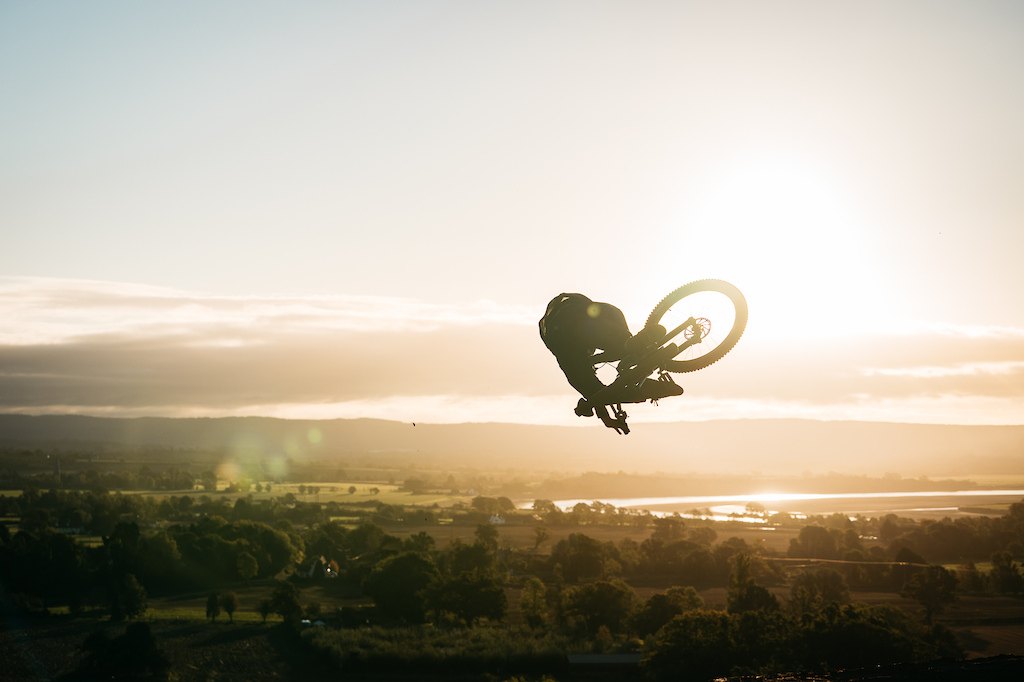 Sunrise hip sessions at Redhill over the Severn Estuary. 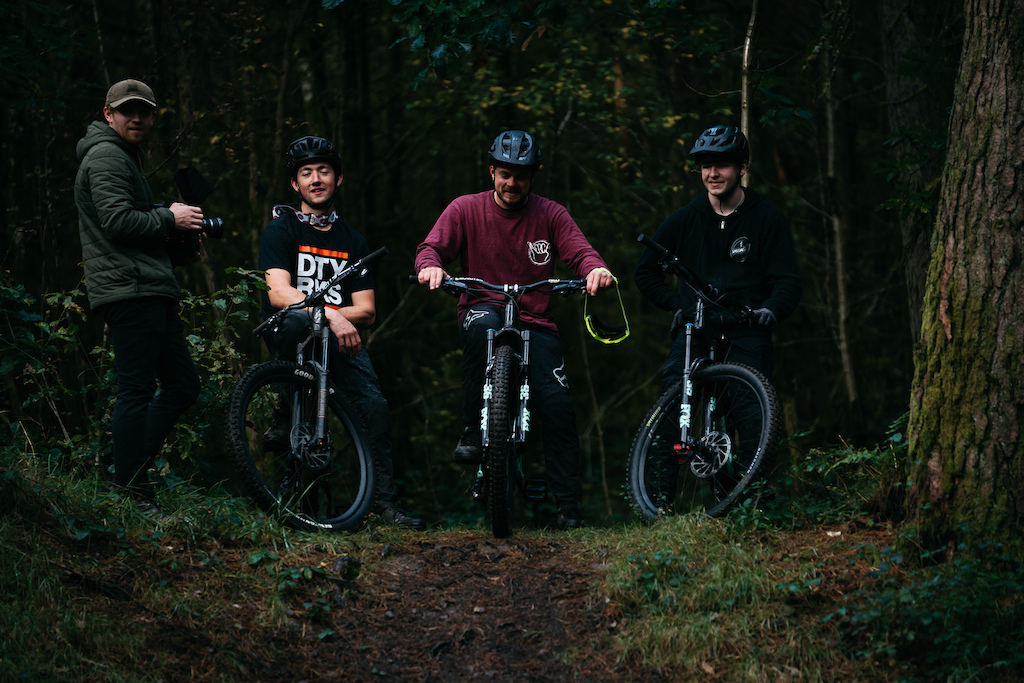 All the boys ready to drop in. You’ll notice the pans and zooms in this video are mixed with some stunning RED footage from the local camera wizard, Callum Philpott/Chapter Studios (pictured left). We tried to mix it up, combine styles and see how it came together. What do you think of the combination? Do you think they compliment each other? Let us know. 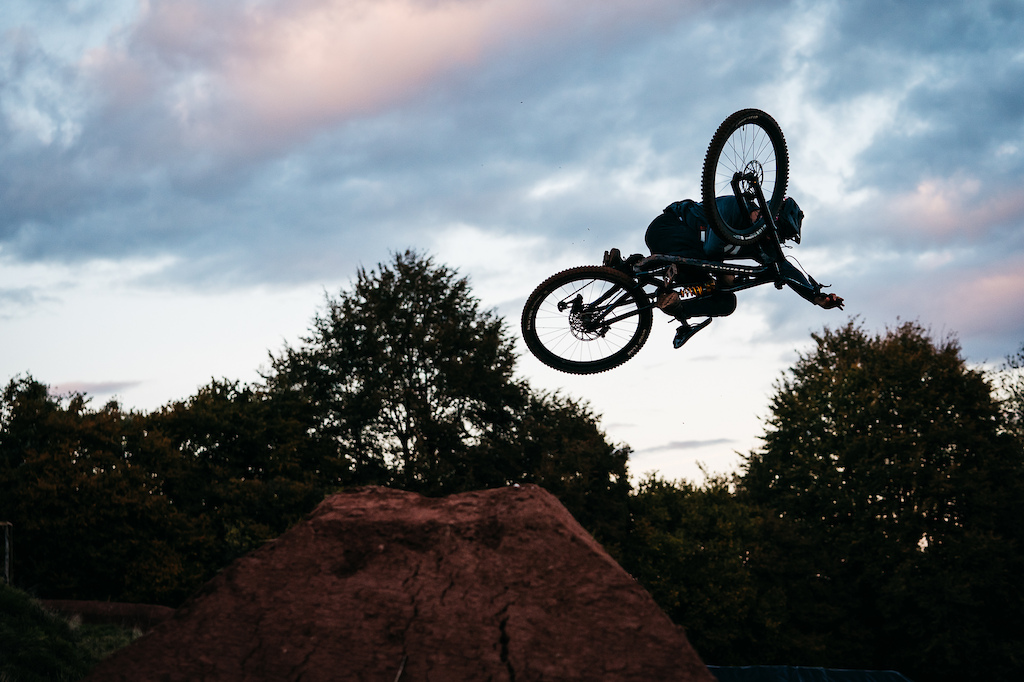 Final shapes from Joel on the final day of shooting.

A huge thanks to the Dustyhuckers for being such gents, Redhill Extreme and Matty Pugh (we’ll be back for redemption), Arctic Trucks for the logistics and huge uplift help, and Specialized Bikes for letting us do what we do.

Anyone know where exactly that wall ride in the FoD is?

OrangeGoblin (Nov 7, 2020 at 5:06)
Yeah, rode it a few months ago, so cool, but it's kinda in ancient woodland and not really cool to share its location.

rojo-1 (Nov 6, 2020 at 8:05)
Weerrhooo Arctic trucks!
"Arctic Trucks have driven to both poles. They visited the North Magnetic Pole with BBC's Top Gear, and in the Antarctic a fleet of four and six wheel-drive vehicles are used by scientists to support their work. Arctic Trucks vehicles also set the record for the fastest journey to the South Pole in 2010."

sjma (Nov 6, 2020 at 6:55)
Hopefully Spesh can get more of these made. My original delivery date was supposed to be in March/April but my shop is telling me it might be oversold for the entire model year already. Womp womp.

Time to get a gravel bike, I guess

ProperPushIrons (Nov 6, 2020 at 23:51)
Local/ small scale builders are still working and largely unaffected by supply issues. I realise they’re not building stumpy evos but maybe never been a better time to #buylocal

got to be better than buying a gravel bike

Man those front clips look better that US models

djt0013 (Nov 6, 2020 at 6:01)
Thought i was getting the new evo but this is what Specialized emailed me, “the shipping team made a huge mistake, SHIPPED YOU ORDER WITHOUT ANY LABELS, and the order was lost.” Worst excuse I’ve ever heard from a major corporation! Don’t expect to see these bikes available for awhile. Nor will i ride for a company that has such little respect for customers

vw4ever (Nov 6, 2020 at 6:11)
That’s too bad. This bike is on order for me, but who knows if/when I’ll see it. When I called the shop yesterday, they are allocated bikes in two shipments, one in November, another in December.

djt0013 (Nov 6, 2020 at 6:19)
@vw4ever: best of luck. I had received emails it had shipped, and then an email to review the bike but obviously the bike never showed. Been riding the S for past 10 years but S(he) lied to me and now i dump S(he). I’m up for grabs ladies, who wants me to shred their wheels off

djt0013 (Nov 6, 2020 at 6:50)
@vw4ever: bike was supposedly shipped Oct. 16. And after several emails i sent without reply’s, phone call that had me on hold for over 30 minutes, just yesterday i got that message. They did refund me my money but did not mention when more will be in stock

Turnerbikes23 (Nov 6, 2020 at 6:25)
Is the new bike a dirt jump bike, what is it with old bmx riders promoting trail bikes doing average tricks on average size jumps and riding slower than your average trail rider