When GT asked if I wanted to go and ride at Brage Vestavik's B-RAGE session at Trysil Bike Arena, I jumped at the chance. I'd never been to Norway so I was excited to go somewhere different and I'd seen videos of the line and thought it look amazing. So I packed up my GT force in a flight bag for the first time since 2019 and flew to Oslo where I met up with my GT Team mates Eliott La Potre and David Lieb. 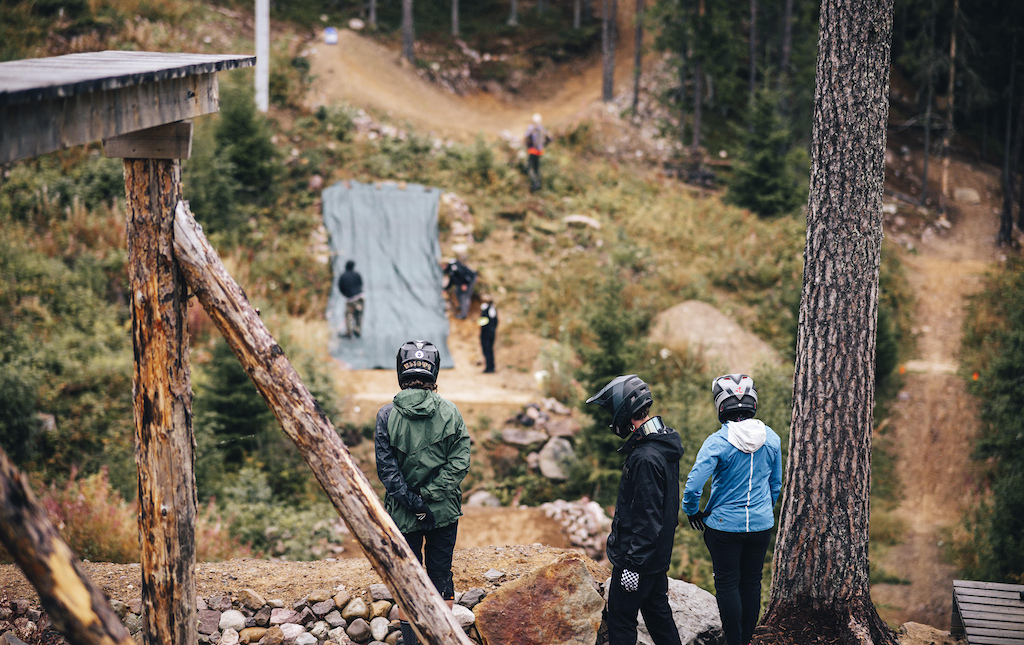 First look at the line PC: Gisle Johnsen
I was honestly quite intimidated by the line when we walked it on the Friday. I often don't look at a line in quite that much detail for that reason, but it is a technical line so it was good to know what was in store. The thing that intimidated me was not the size of the jumps, more that it looked quite technical without much opportunity to stop or exit if things went wrong. There were landings that looked like they would hand you a ton of speed, dropping you down the hill straight into the next low take off. These kind of set ups often leave me feeling like stopping would be difficult. There were also trees either side of lips, rocks on the back of landings and streams or fallen trees in the gaps. When I hit a new line, my intention will be to always hit the next jump if it feels right - but my mind likes an escape plan and I wasn't sure if I had one here! Regardless, I was pretty sure it was within my capabilities, I just needed to get those first run nerves settled. The rain ruined my plans though and I had to wait until the next day to hit the start of the line. 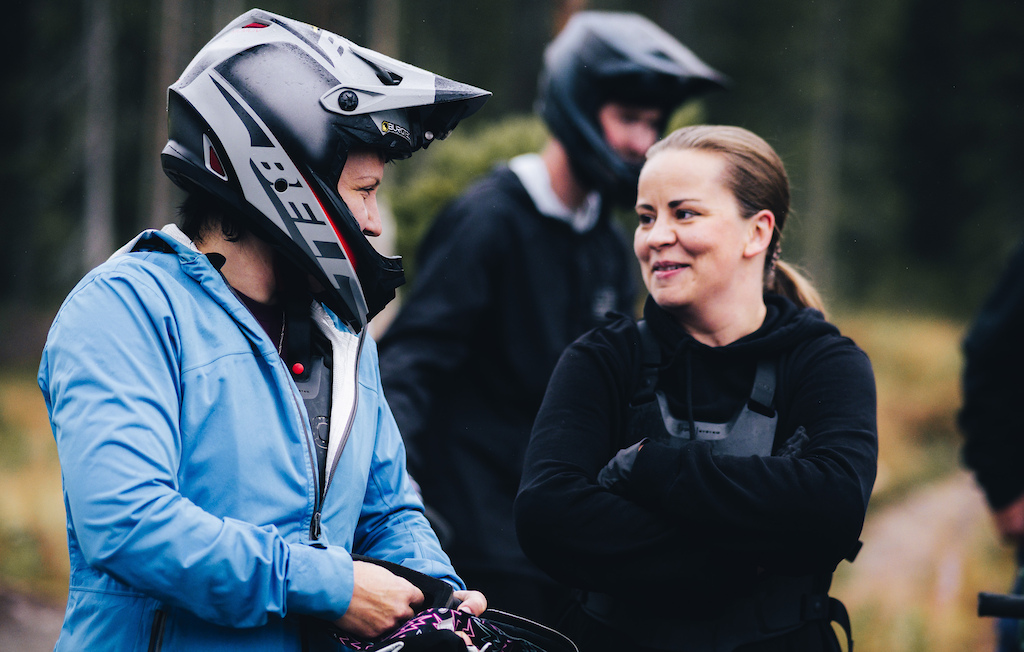 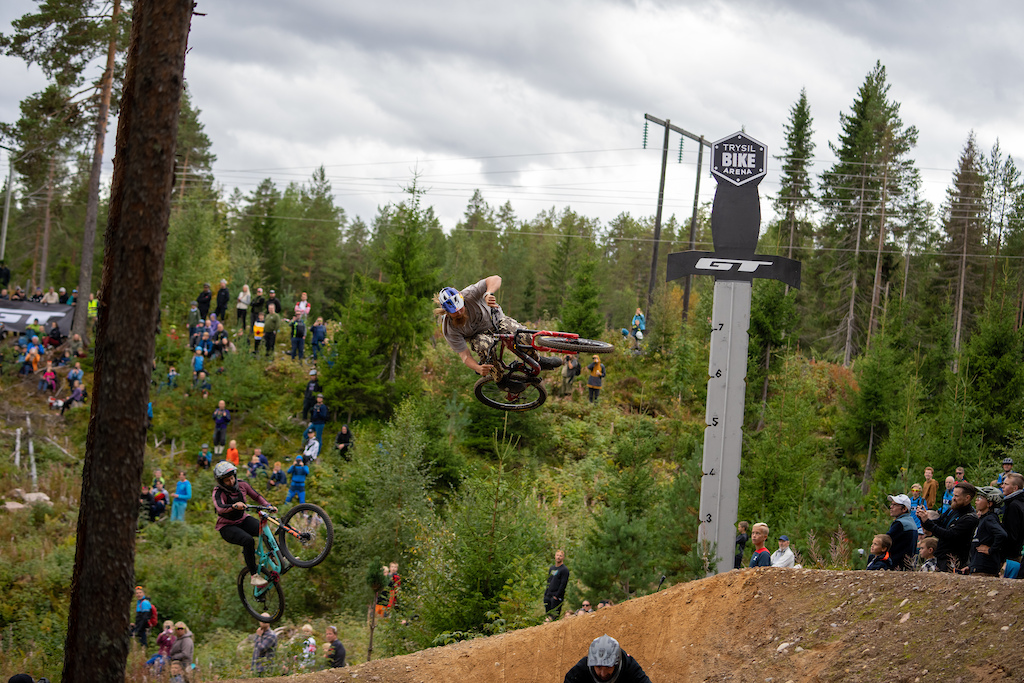 Brage leading the way PC: Jonas Sjogren
On the day of the session, we had much kinder weather thankfully. After a quick warm up on the dual track I headed straight up to the B-Rage line to meet up with Eliott. Eliott had jumped it the previous day before the rain kicked in and had full confidence in my ability, which in turn boosted my own. He told me it was running a little faster now too. Taking in the tips he gave me, I dropped in behind him and sent the first 3 jumps to the first natural stopping point. Wow! They felt so good! My mind was now at ease knowing this line is built so well, there is probably not much chance I will need to stop after all. I did see some others manage to stop at the points I thought weren't possible later on too, without too much trouble. Perhaps my risk assessment was slightly over cautious! 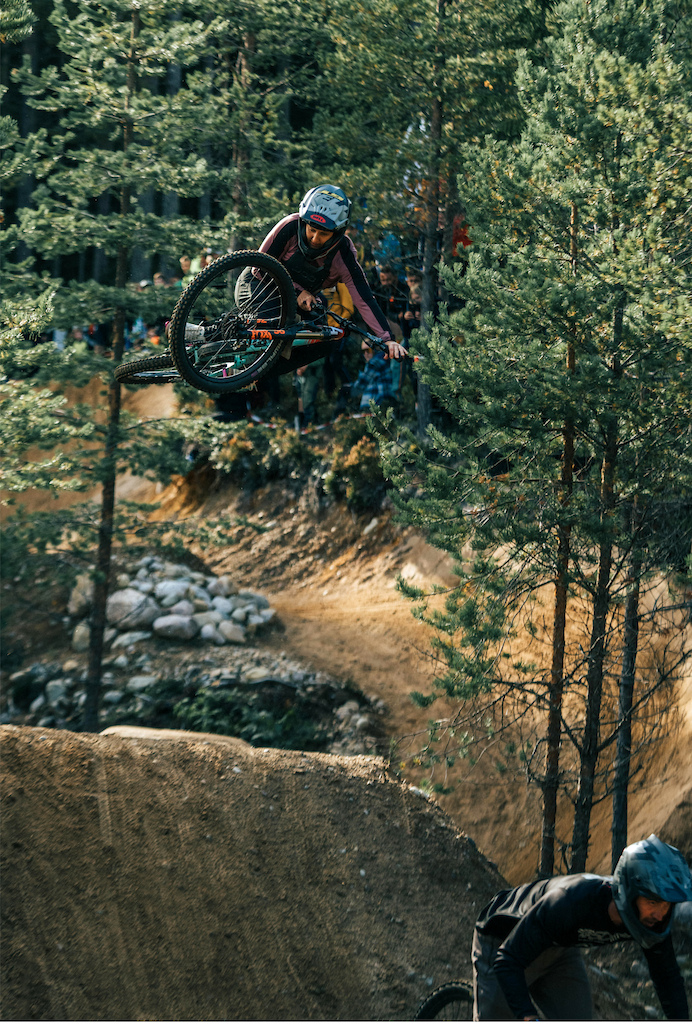 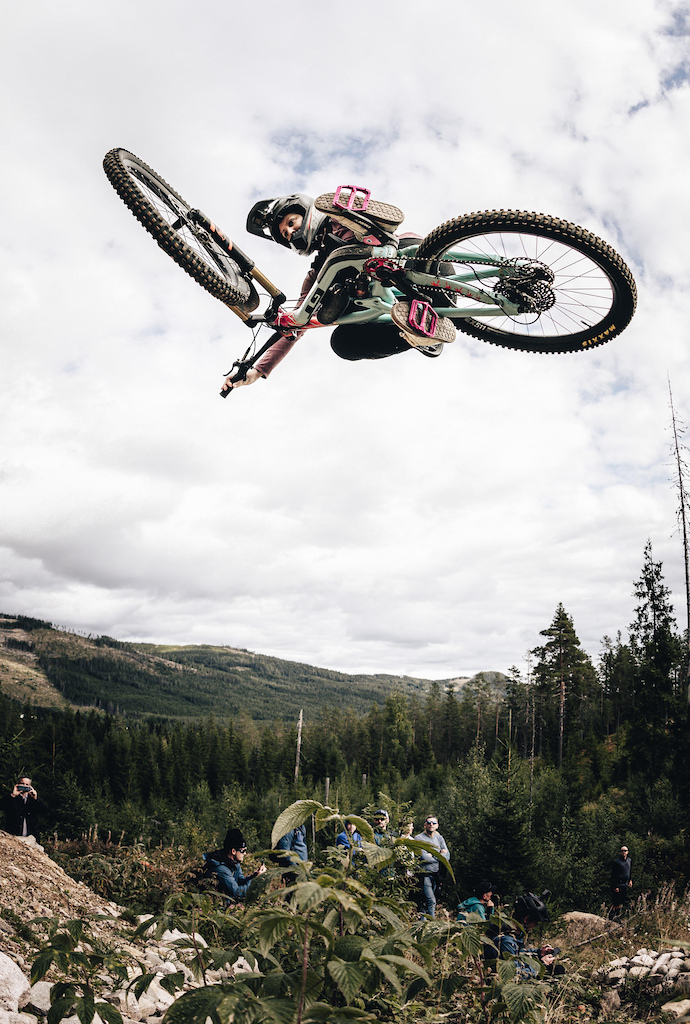 Left Hip - PC: Jonas Sjogren // Right Hip - PC: Gisle Johnsen
After hitting the first 3 sets we quickly moved onto the next section, which was on quite a steep part of the hill. Eliott assured me that once I was in this part of the line I just had to chill. He wasn't wrong, in fact I chilled a little too much on the biggest jump, but it wasn't much of a problem! Back to the top and we linked the first two sections together. Relaxed and starting to really enjoy it now, I realised what an awesome line this is. There's hips, shark fins, berms, extra wide landings to go big on... this line is built for flow and style. It felt like a big bike version of being at the trails on the dj bike, I was right at home. 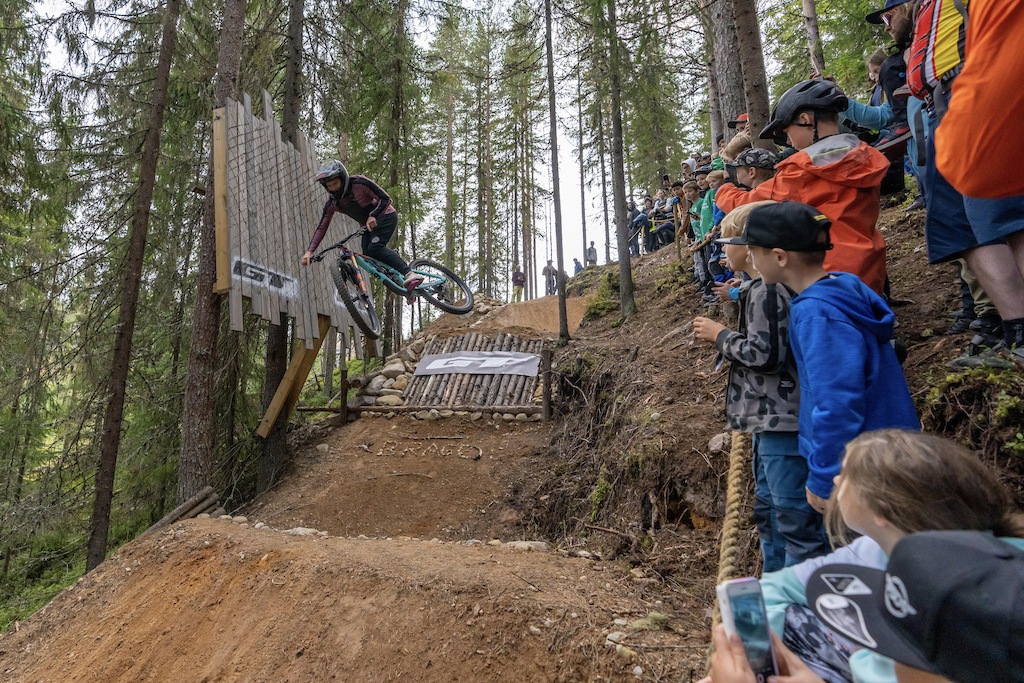 The second section dropped steeper through the woods PC: Jonas Sjogren
The crowd started to show up and the session kicked off. It was so much fun riding the line and doing trains with the likes of Eliott, David, Brage and Nico Vink who was a welcome surprise rider. The session finished at the end of the line on the big whale tail and new trick jump. I hadn't ridden this yet, but it like everything else and with the help of a friendly tow in, it just worked perfectly. It was also great to meet all the Norwegian women who came to ride - this was the first year any women have ridden the B-Rage session at all. None of them put pressure on themselves to ride any of the line, but all of them ended up jumping things they didn't think they would! I chatted to several parents in the crowd throughout the day who told me how great it was to see all the women in this session as they had brought their daughters along to watch. Hearing that put the icing on the cake of an already incredible day.

Thanks to GT Bicycles, Trysil Bike Arena, Eliott, David, Brage and everyone else I met for making it a great experience. I hope I get to go back! 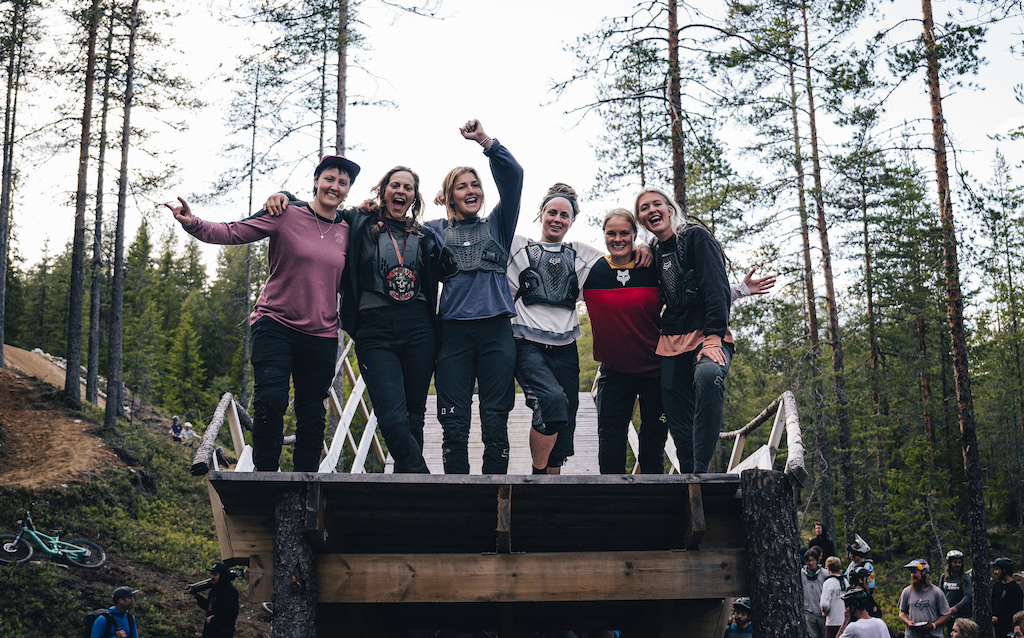 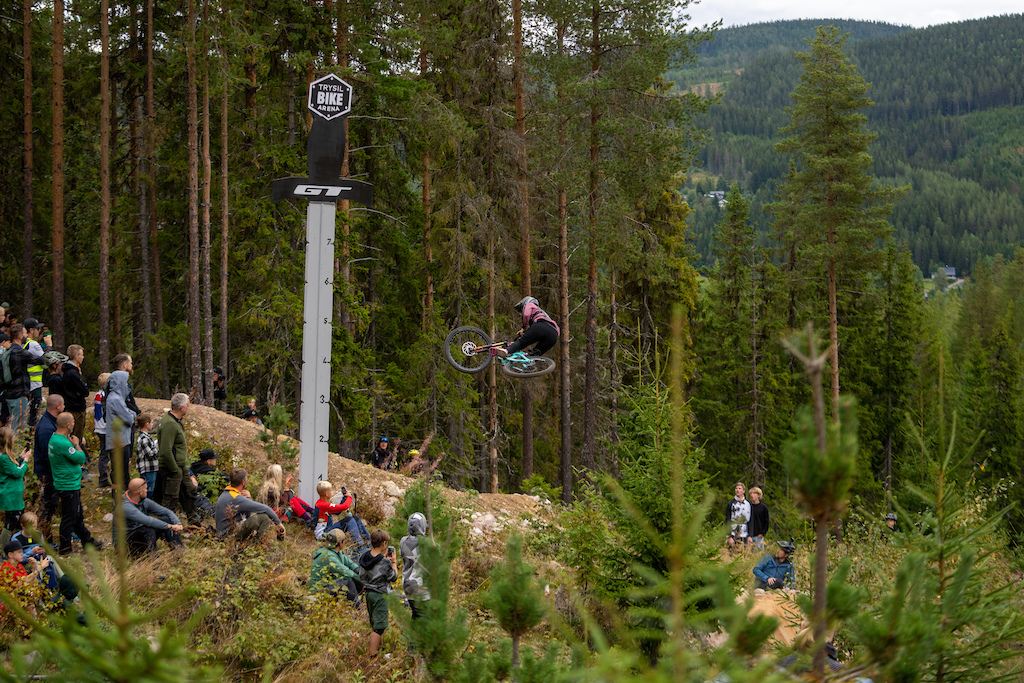 soup4myfamily (Sep 19, 2022 at 11:26)
Joey has been inspiring us for so long! had me smiling the edit, thank you so much for what you have been doing for Freeride all these years!

plyawn (Sep 20, 2022 at 9:58)
When you consider that Joey is basically a privateer, then see how & what she rides you can't help but have massive respect for what she does.

transitter (Sep 20, 2022 at 2:52)
Went to Norway this summer with the family, could only bring my hardtail unfortunately. Drammen bikepark was closed at the time we we’re there. They were building a jumpline which looked promising. Spend a day at Hafjell with my son but it sucked on a hardtail, tried to make the best of it. Maybe we should have gone to Trysil, wouldn’t have jumped these jumps but it looks like a good and fun place to ride.

Startgas (Sep 20, 2022 at 4:33)
I rode Drammen and Hafjell for the first time this year, both were quite rough. Trysil would have indeed been a better choice for you, there is a lot to ride and most can be ridden on a hardtail, both the lift accessed and Gullia-trails.

howsyourdad (Sep 20, 2022 at 5:04)
@Startgas: weird place though trysil. lots of blue trails, trails outside the park, then this MONSTER and not much imbetween

Aqui (Sep 20, 2022 at 7:36)
@howsyourdad: they built a red line next to B-Rage which is really nice and more accessible. It’s called Rodeo I think (you can find some videos of Brage riding it…)