Must Watch: Kilian Bron Shreds Alongside BASE Jumpers, Wingsuiters & More in 'Outdoor Synchrony'


"Three years ago, we started our series of missions deep in the heart of Peru. A first episode shot in one day was followed by other more successful videos. We have vivid memories of it, through Namibian landscapes, exposed dolomite rock trails, the sheer volcanic peaks of Chile and many more.

Beyond the landscapes, these adventures were completed by getting together and sharing with others. In particular, I’m thinking of Yannis Pelé and Jey Clementz, with whom I shared a nice trip with to the Faroe Islands.


Today it is all about a multi-month project, the seed of which was planted during a long period of confinement. Everything grew gradually until we were ready to go at the first green light from the French government, on May 11th. I personally wanted to do something new, by combining an original concept with the discovery of different worlds through different sports.

The idea was born… Bring together athletes from different backgrounds in a single video, crossing paths with them on my way, and across all the different spots. 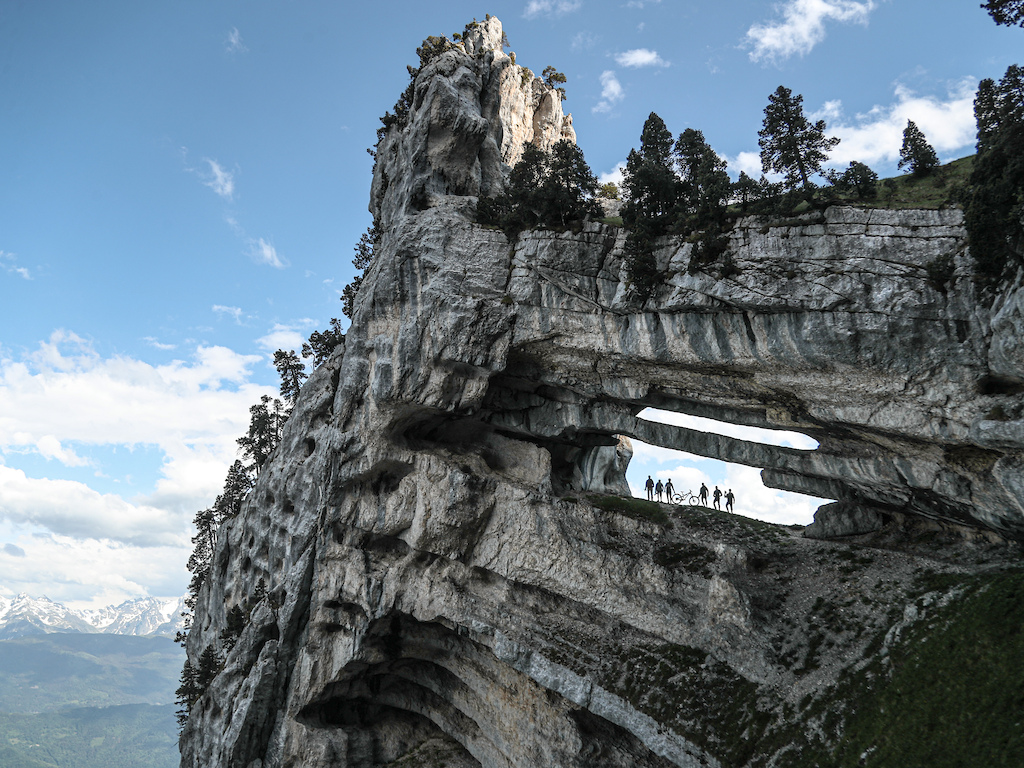 Fabulous places all over the French Alps that we scoured for weeks. For the most part I’d already written them down in my ideas folder, but they are places that I’d noticed, sometimes from years past. I like to spend time in the mountains, explore or chat with locals to find the most beautiful places. I also spend a lot of time studying different topography and landforms, reading and watching documentaries. There is no miracle recipe, it’s good to learn! 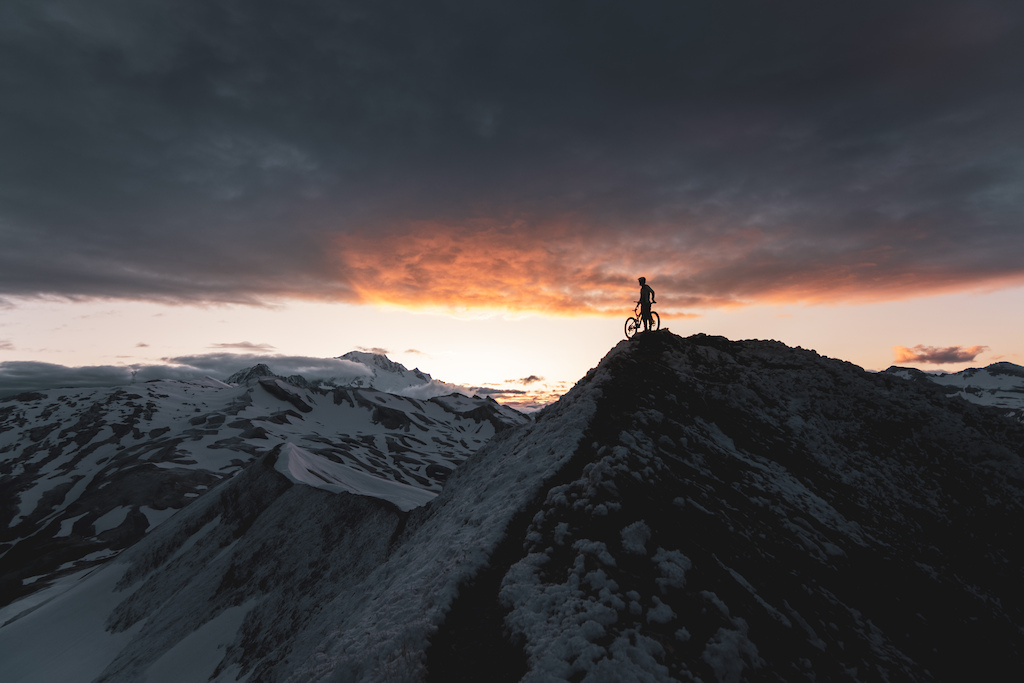 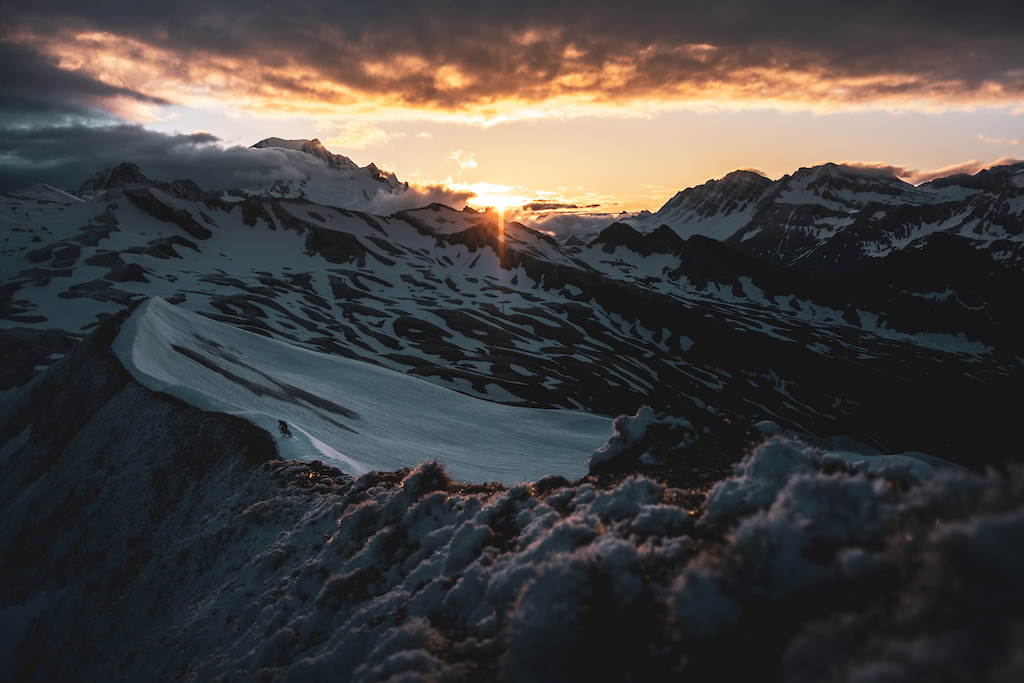 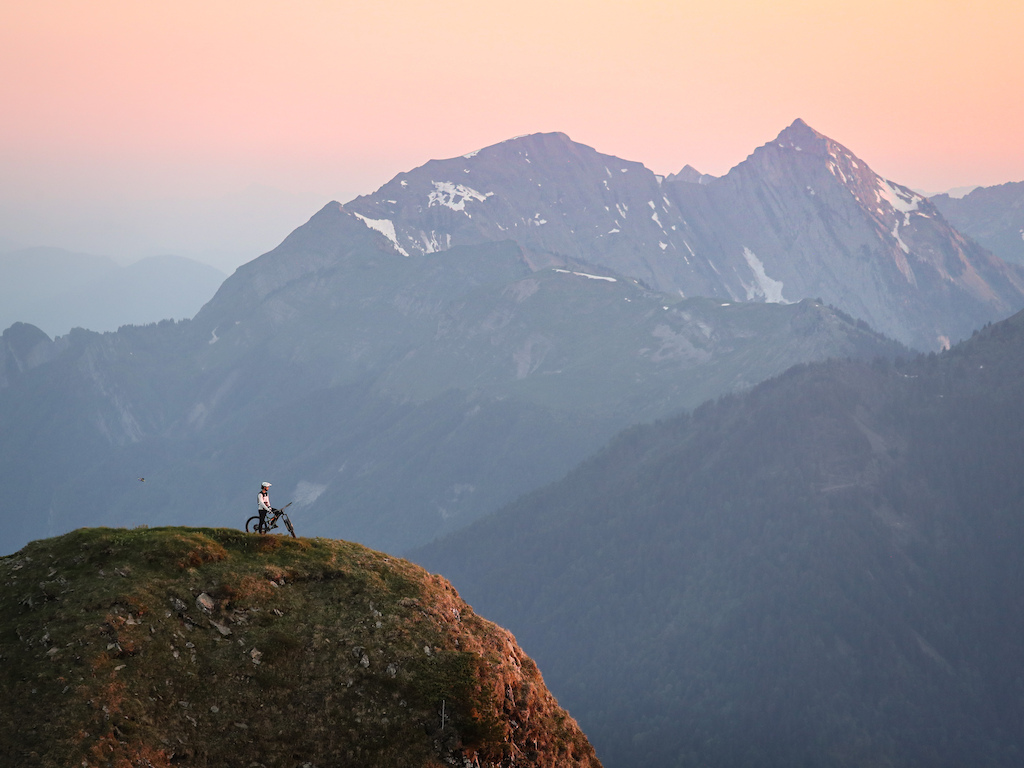 My two colleagues Pierre Henni and Pierre Dupont then enter the game. They accompany me with their cameras in hand to make all these ideas come true. This is rarely an easy task! Unlike some shoots accessible in a bike park, where clips can be easily joined together, it’s not uncommon for us to spend several hours conquering a ridge or a remote summit. For the record, we sometimes spend a whole day getting a single shot... But it is not a question of complaining and listing the difficulties of the shoot. I enjoy being in these situations. Like I enjoy riding every day, without thinking about these projects. 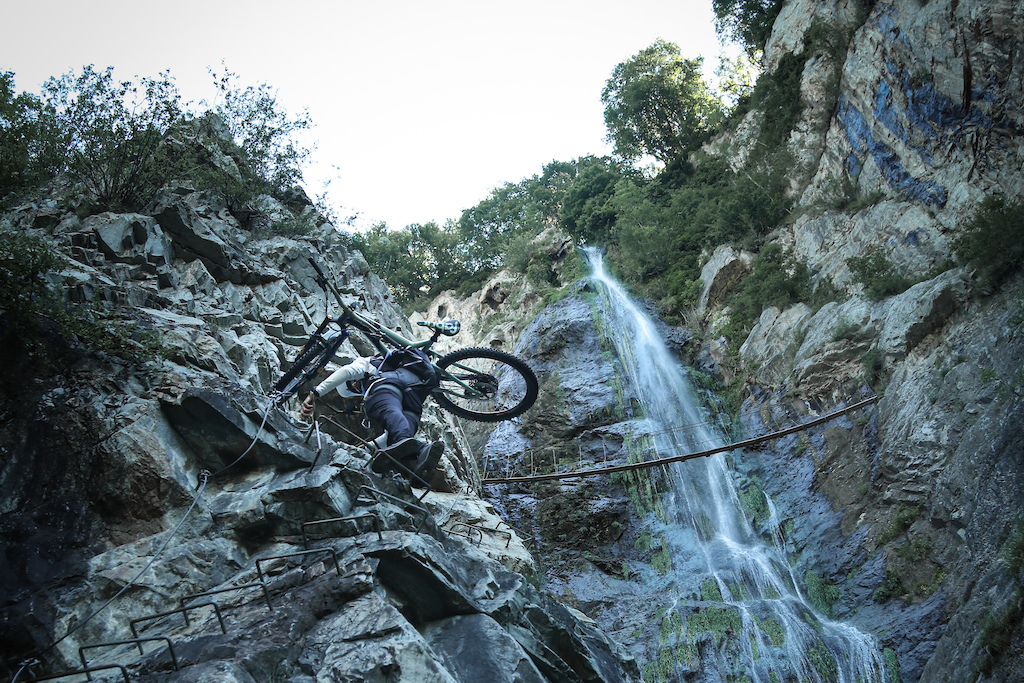 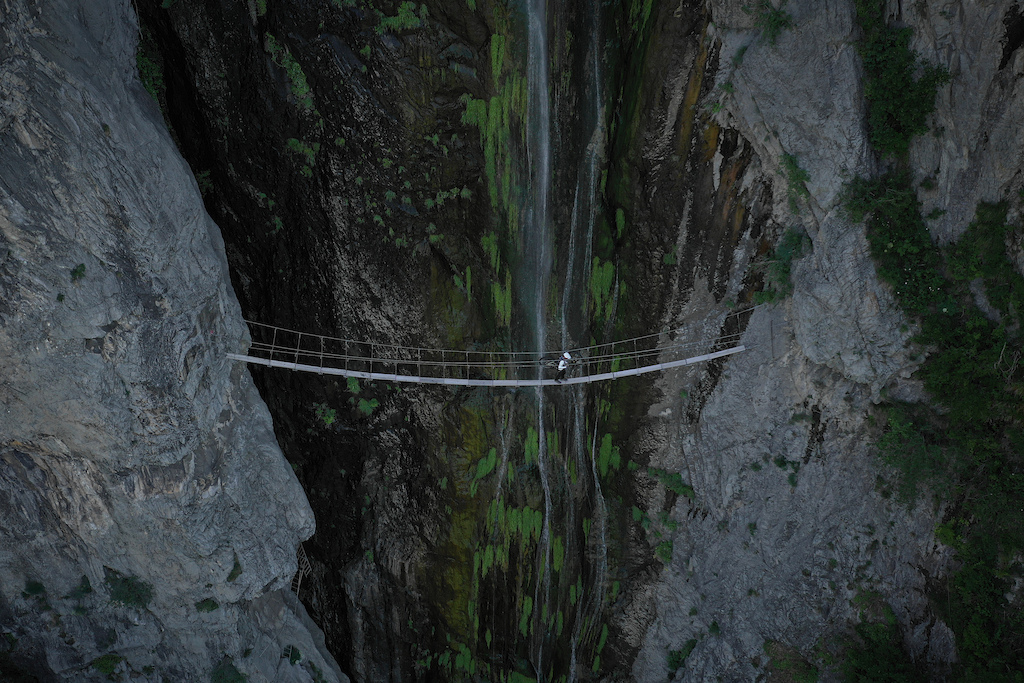 The shoot was a truly enriching experience on all levels! We learned a lot by getting closer to each sport and each athlete. Whether in the air, on the water, more familiarly on land or even on snow, we touched all bases. Above all, we shared this same desire to escape, no matter how we enjoy the mountains. 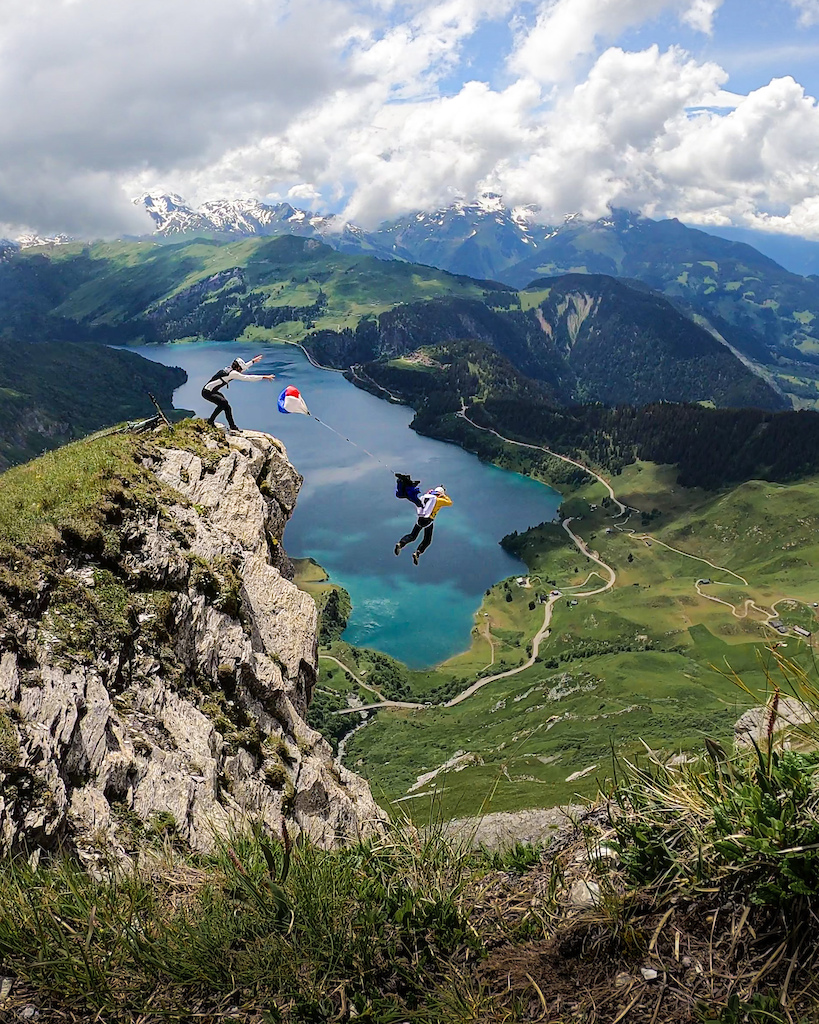 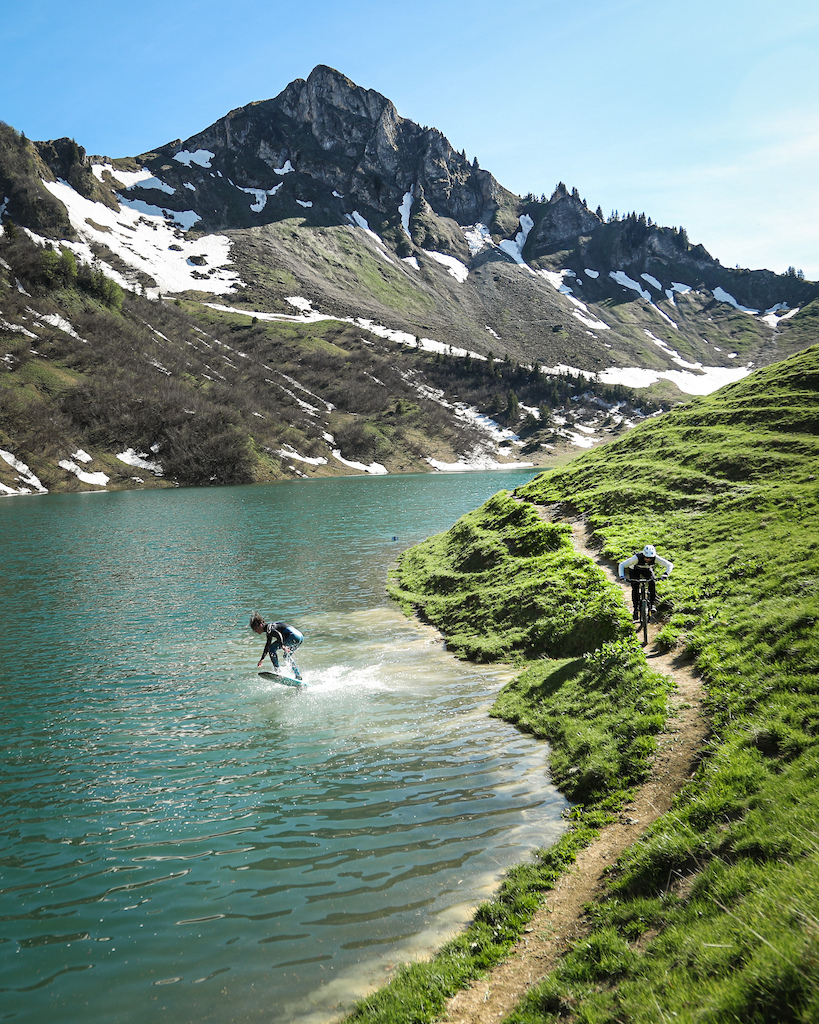 These pairings with each athlete were built on close affinities. Take for example, trail runner Michel Lanne. In addition to being an ultra-complete athlete, he is a truly endearing person. We met during a rescue; he was working at the time. Michel is a mountain rescue professional and was part of a team that came to help us in an avalanche a few years ago. For the record, we met again the same evening in a restaurant with the helicopter pilot. A somewhat unusual story which has allowed us to forge a relationship since. 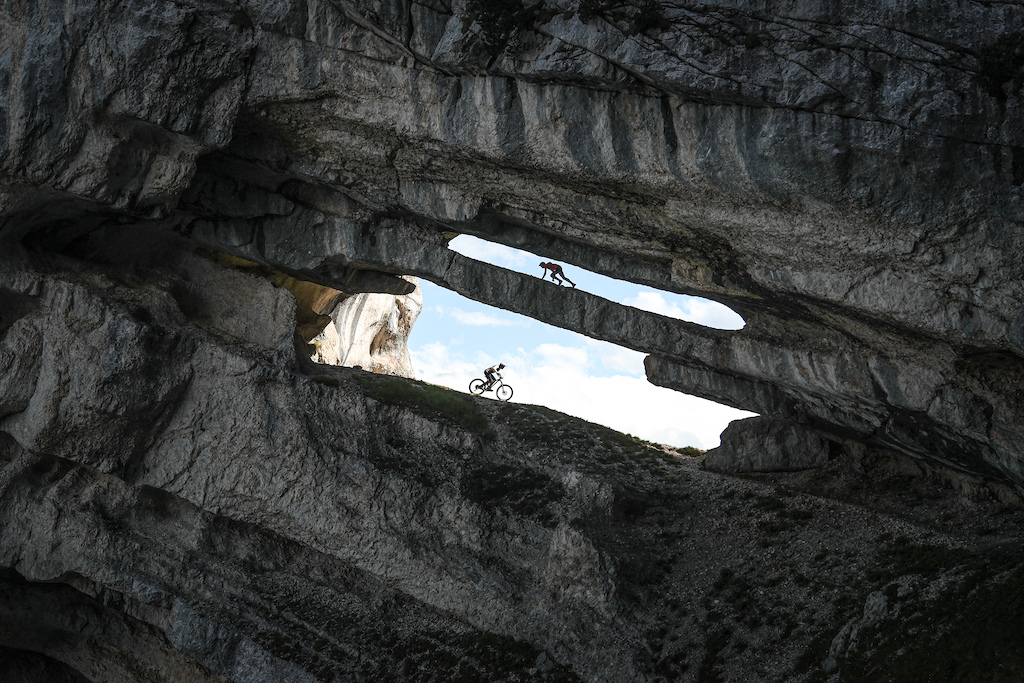 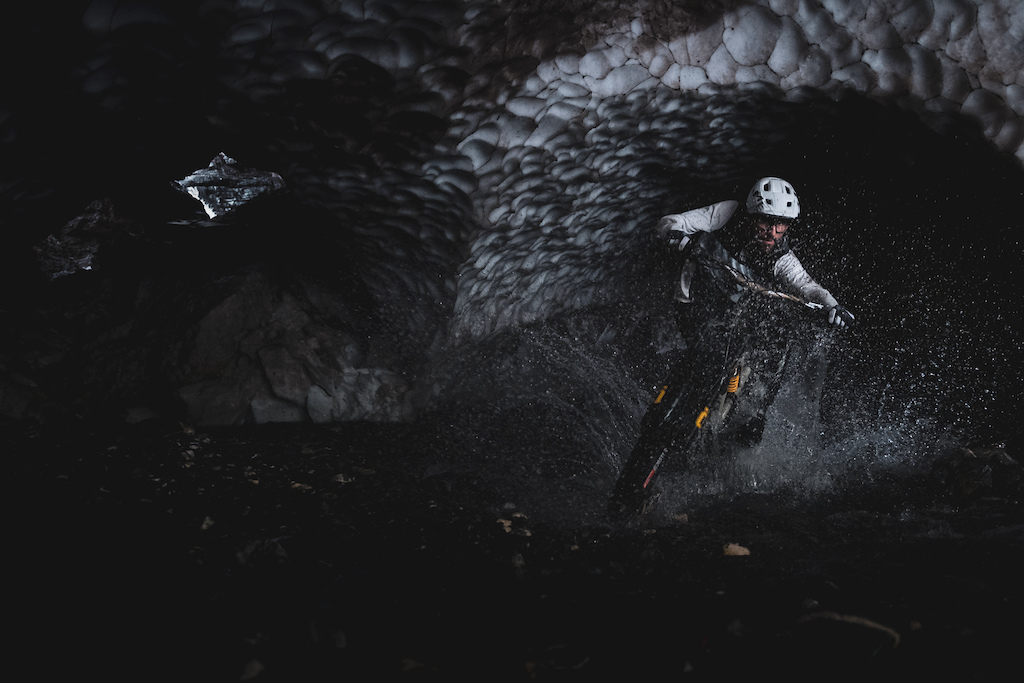 I’m also mindful of wonderful memories with speed flyers, Valentin Delluc and Ugo Gerola. It took several days to find the right weather slot as the wind was so violent and unstable at the level of the pass where we were to set off from. But we got there in the end! 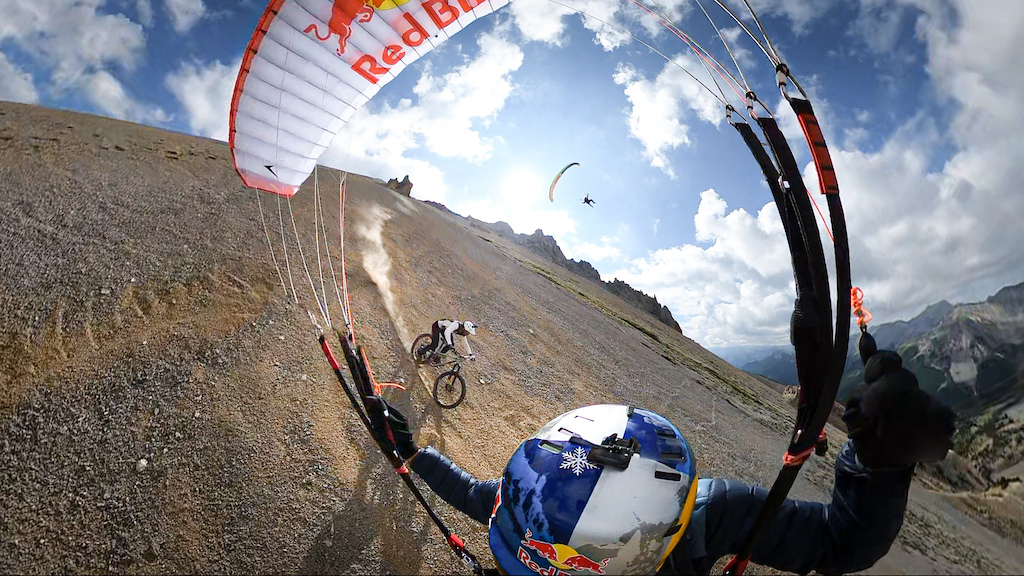 Like when we this long sequence shot in the first part of the video with snowboarder Victor Daviet and Scott Cheminal with the foil, just as I appeared on the mountainside at the end of the shot. 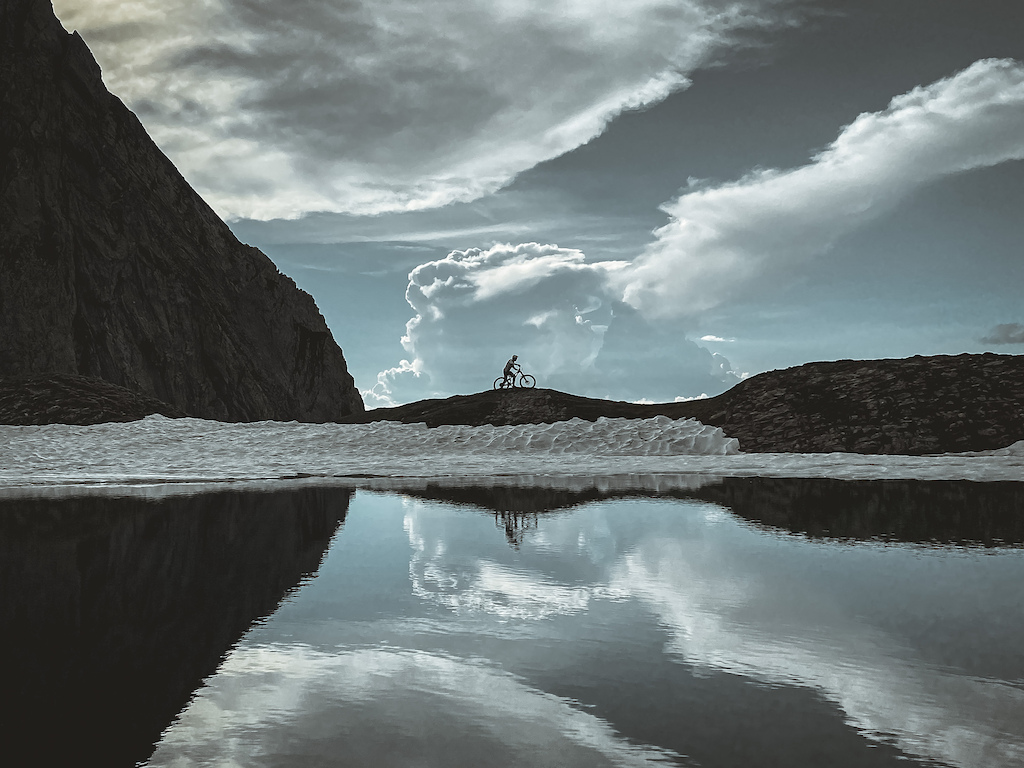 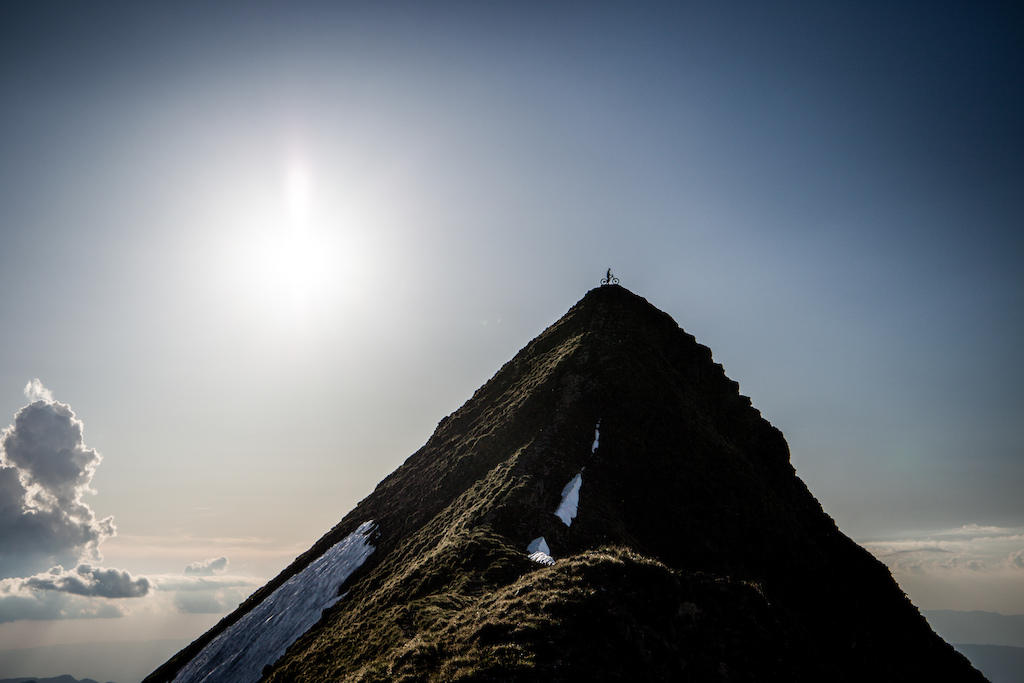 There are also other discreet appearances like that of climber Baptiste Hagnère and extraordinary encounters with BASE jumper and highliner Antony Newton. We also had the opportunity to try the experience with Pierre Henni, the cameraman and main editor of the project. Perched between two large cliffy rocks, high above Lac de Roselend, we tried as best we could to stay sat down on this highline, without being able to stand up... 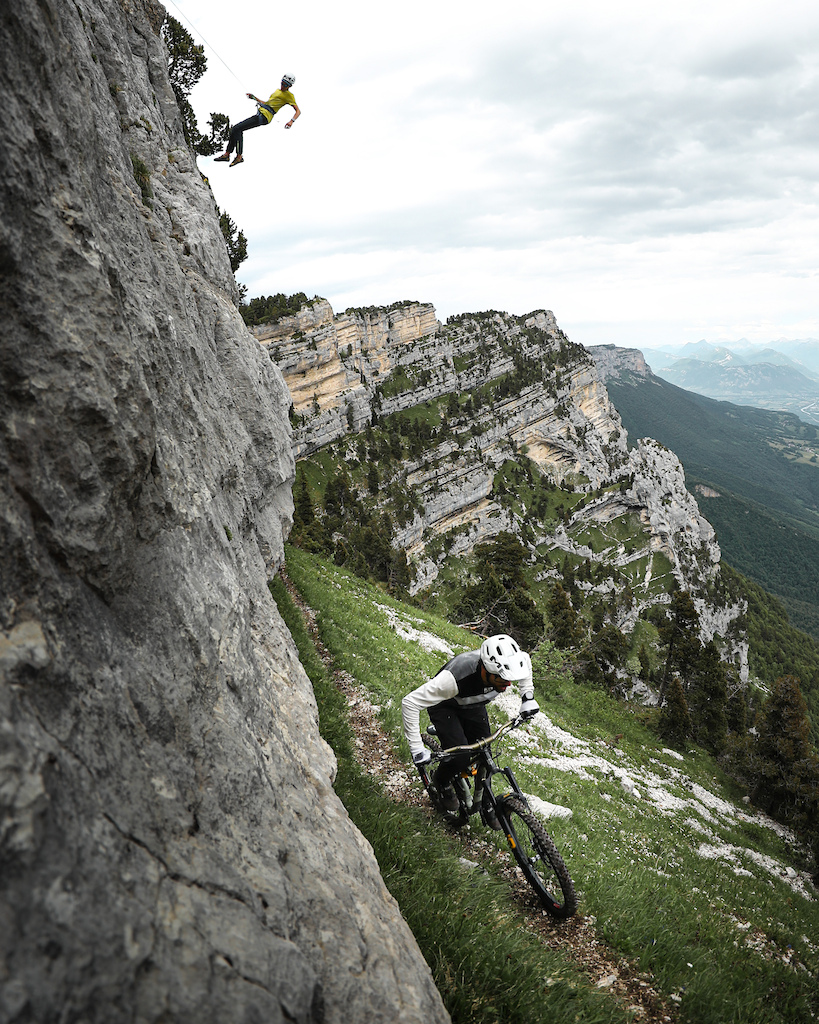 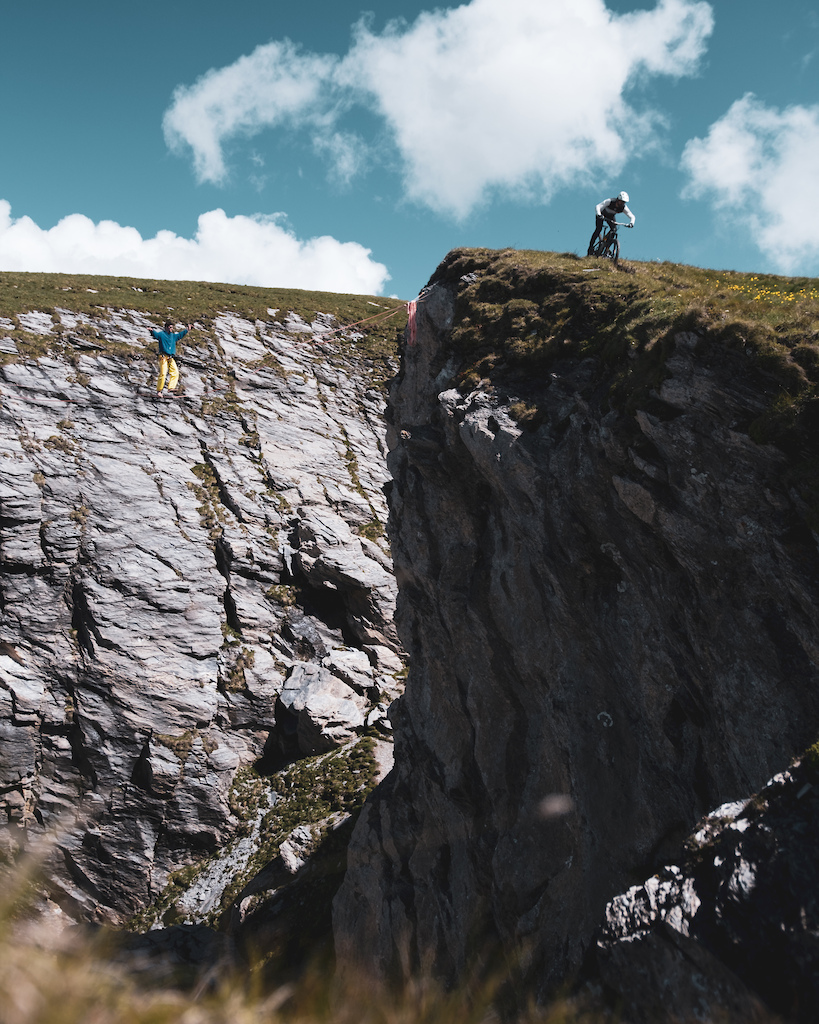 I will end with the passion and professionalism of the wingsuit the Soul Flyers which particularly amazed me. Once again, I’d also like to send a little word to Vince who tragically passed away ten days ago. Beyond his incredible performances, Vince touched us with his personality and how he moved all of those who shared moments of life with him from near and far.

You will continue to make us dream, good flight Vince!" 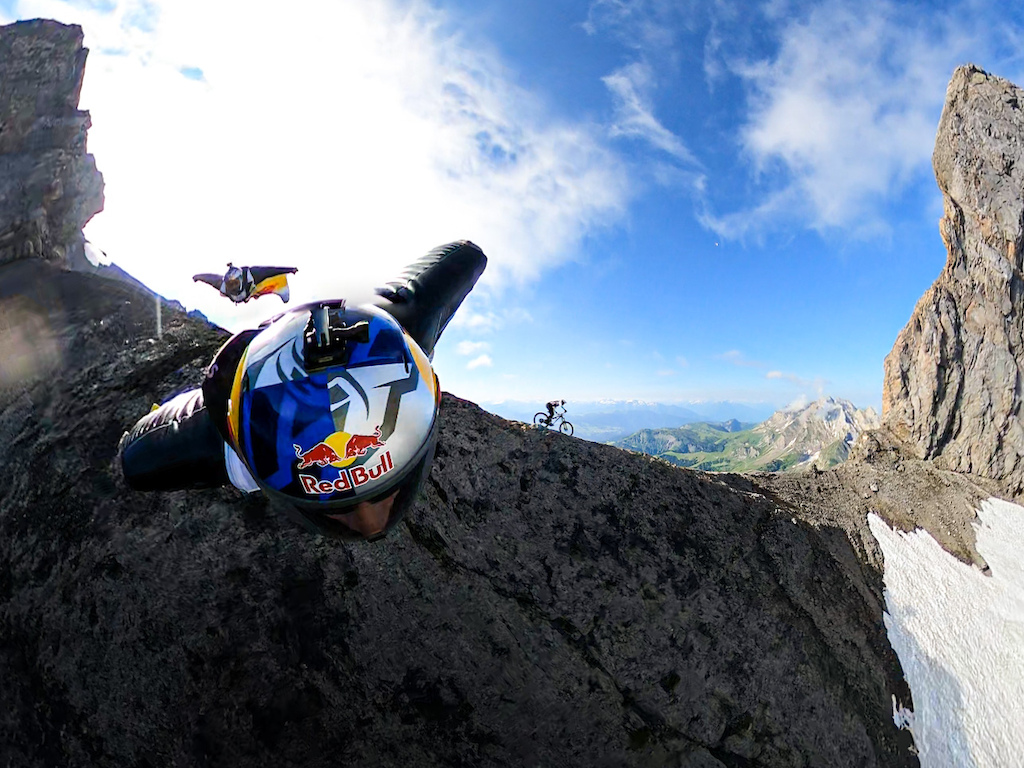 Nearly every person I know who did/does speedflying or BASE/wingsuit has gotten hurt. About half of them have given it up. The other half have had close calls, been busted up, lost limbs, lost lives, left behind parents, spouses and also kids that will never know them, were ruined financially, suffer(ed) disabilities, left orphaned pets. It looks righteously glamorous on screen, but for this punter, the losses in those sports are too likely and too great for (what I imagine would be) the awesome rewards. I'm decidedly not averse to risk, but I draw the line at a certain point. That point is for each of us to decide, so pardon my musing. But productions like this incredible film do a good job of masking out a dark side. Downvote away, but have fun and live to have more.

flaflow (Dec 3, 2020 at 15:31)
Sad but True Those wingsuit might be the most deadly thing ever. This edit though!! Man this is so fun and beautiful to watch.

chris-brown225 (Dec 3, 2020 at 21:30)
A friend of mine does and teaches BASE jumping, in normal life he's one of the craziest motherfuckers out there but in terms of preparation to jump or deciding whether to jump at a certain time or walk back down he's one of the most calculated, risk-aware people I know. It's obviously a sport with a lot less margin for error than others but there are ways to reduce those risks

BenPea (Dec 4, 2020 at 1:14)
That said, while there was a wingsuiter killed near here in the Chartreuse range about a year ago, a novice mountainbiker fell off a cliff next to a very popular trail just above the city not long ago (in the same range) and also never made it home. There will probably be an avalanche death in the region before christmas... So many ways to die on a mountain.

JustAnotherRiderHere (Dec 4, 2020 at 3:09)
@chris-brown225: Um...every time we ride our bikes we weigh a certain amount of risk. While I know you (Chris-brown225) get this, so many others will be triggered so hard......(seriously, I am thinking that the safe spaces may fill up).

BenPea (Dec 4, 2020 at 4:28)
@AAAAAHHH: More or less. It was actually on the path down to the Bastille if I remember correctly, with the boulder that you bypass to the right (apparently it was dark and he went left). He didn't fall off Le Corbak (although I did once...).

AyJayDoubleyou (Dec 4, 2020 at 7:45)
At one point I beleive that 10% of people who had ever done a wingsuited BASE jump had died doing one. Not sure if thats still true but its still a hugely high risk pursuit and I guess one that is not done light heartedly.

tremeer023 (Dec 4, 2020 at 13:19)
In many ways I agree with @rider001's sentiments but humans will always look to push the boundaries. See (off the top of my head) big wave surfers, deep sea divers/freedivers, freeclimbers, astronauts? etc.
Having said that, those wingsuits look particularly crazy.

FoesKnows (Dec 4, 2020 at 13:58)
I fail to believe that strapping yourself in a condom with flaps and dropping out of a plane while attempting to surf the earths surface is inherently dangerous.

FlorentLG (Dec 3, 2020 at 11:19)
I didnt read the comments before watching but during the movie I was wondering why is that not a big MUST WATCH???
Happy not to be alone in my opinion...
PB I dont understand your selection criteria?

Lokirides (Dec 3, 2020 at 16:08)
Point Break called and wants its plot line back. I'd put this video somewhere between the original and the redux... this one definitely has the best acting though!

This is THE BEST, craziest and most impressive clip ive ever seen , bar none!!