As the plane glides over the Eastern Himalayan ranges and starts its descent through the clouds, entering Paro airport, the team on board sense that the adventure has already begun. The plane then makes an exhilarating entry onto the runway flanked by lush paddy fields. 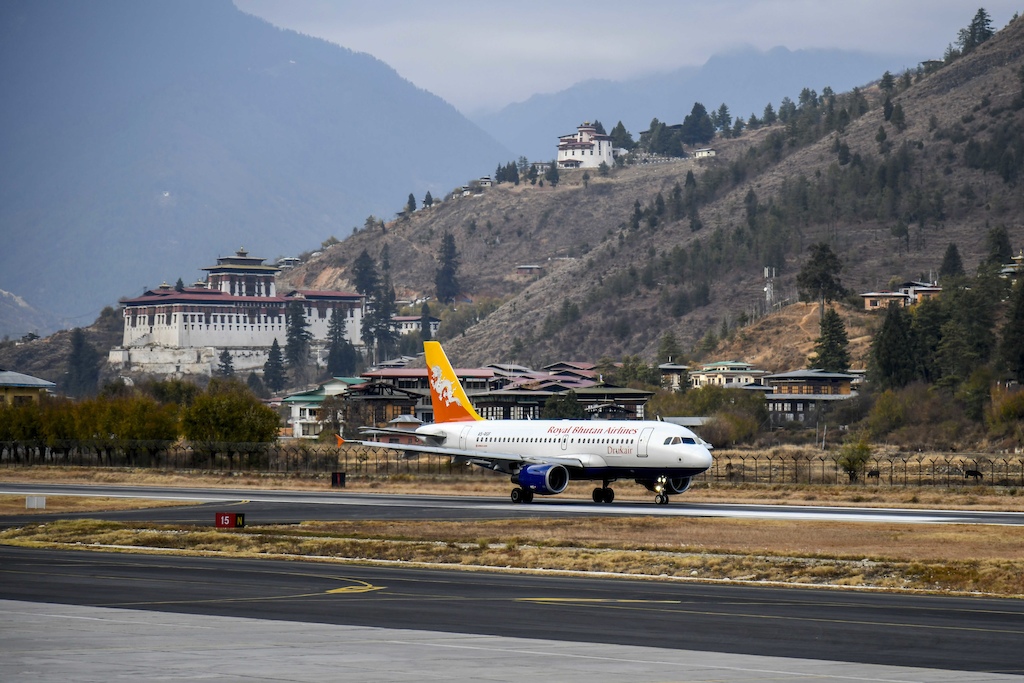 At the invitation of His Royal Highness, Prince Jigyel Ugyen Wangchuck, founder of Bhutan Philanthropy Ventures Private Limited (BPV), a commercially operating social enterprise founded to sustain the philanthropic activities of the Tarayana Foundation, organized a visit for Wyn Masters, Cody Kelley, Florent Poilane and filmmaker Scott Secco. The four travelled from three different continents to test some of the hitherto uncharted routes that the BPV intends to offer as part of a phenomenal mountain biking tour package under the Prince’s direction.

As they ride their way from the capital city of Thimphu towards the Madman Trails in Punakha, a panoramic view of some of the tallest mountains in the country opens up at the Dochula mountain pass (3100m ASL). 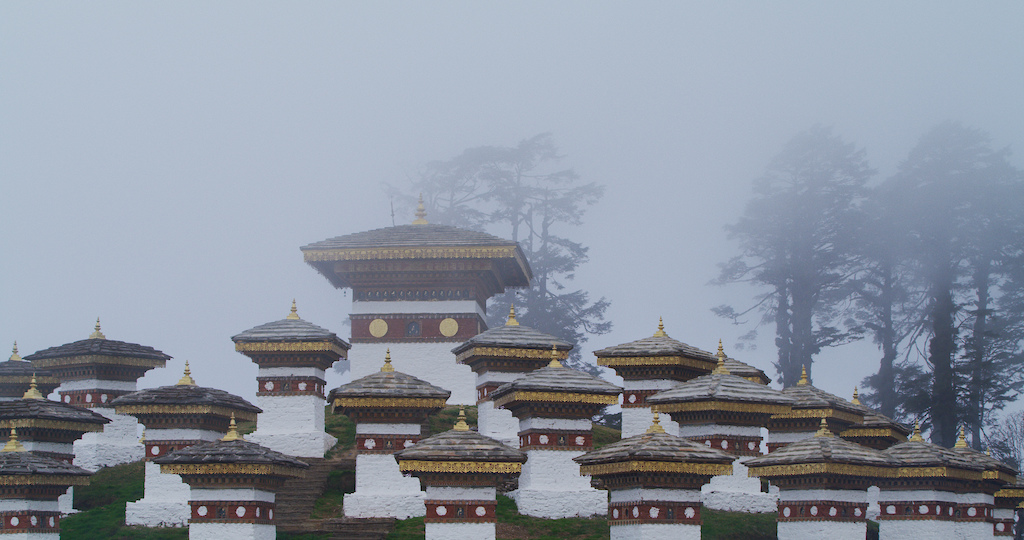 The crew then drop down the misty rhododendron forest following local pinner, Tandin “Junior” Wang, to reach the subtropical valley of Punakha. 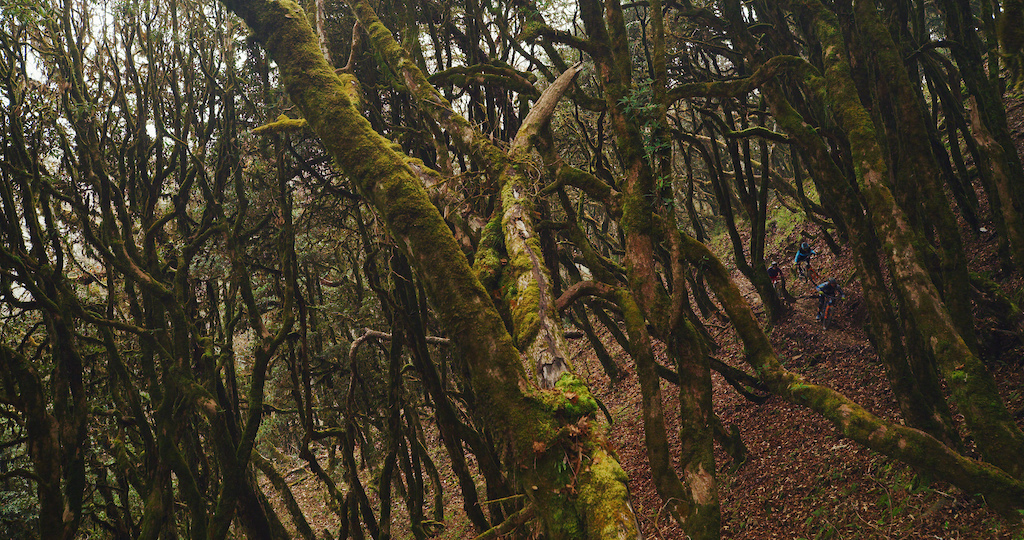 This is one for the memory book. Without any warning or warm-up, “Junior” two-wheel drifts his way around the very first berm of the 10km descent. 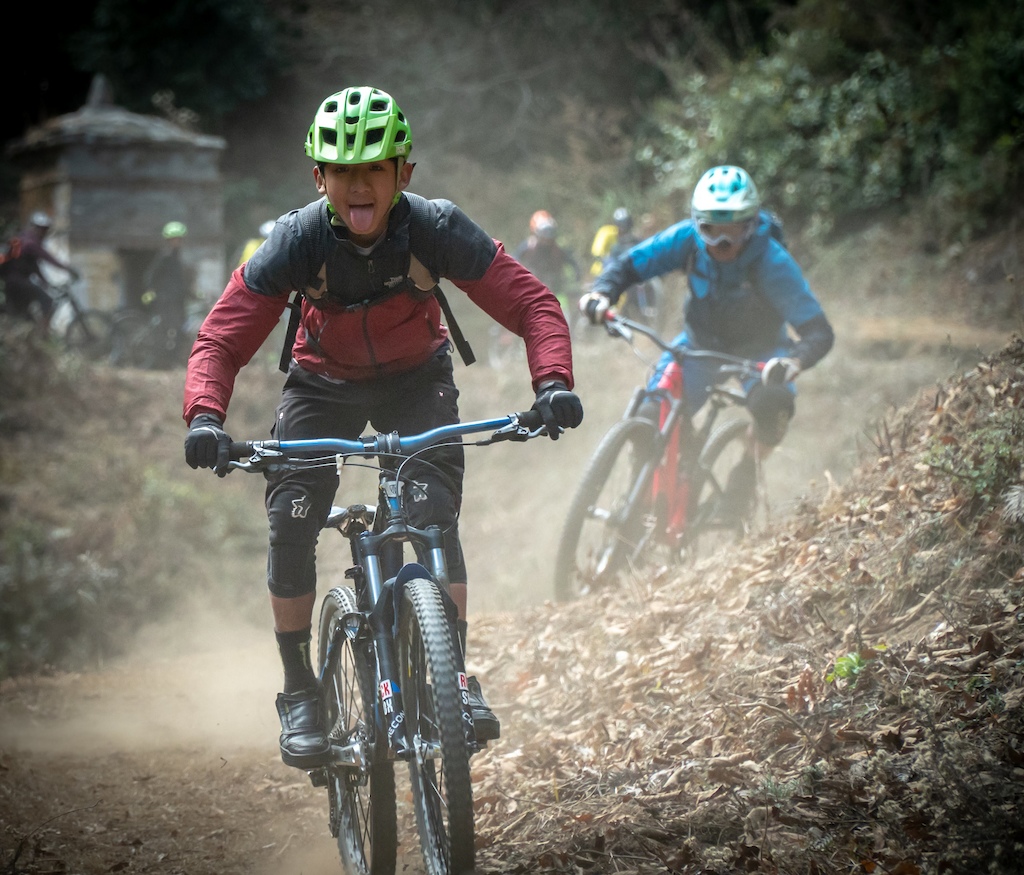 Wyn, Cody, and Florent realize at this point that it would not be the chill exploration ride they were expecting. It’s game on! Inside-lines, foot-out offcamber, big hucks over roots and rocks, loam flying around, “Junior” does it all on his beaten-up 26” bike. 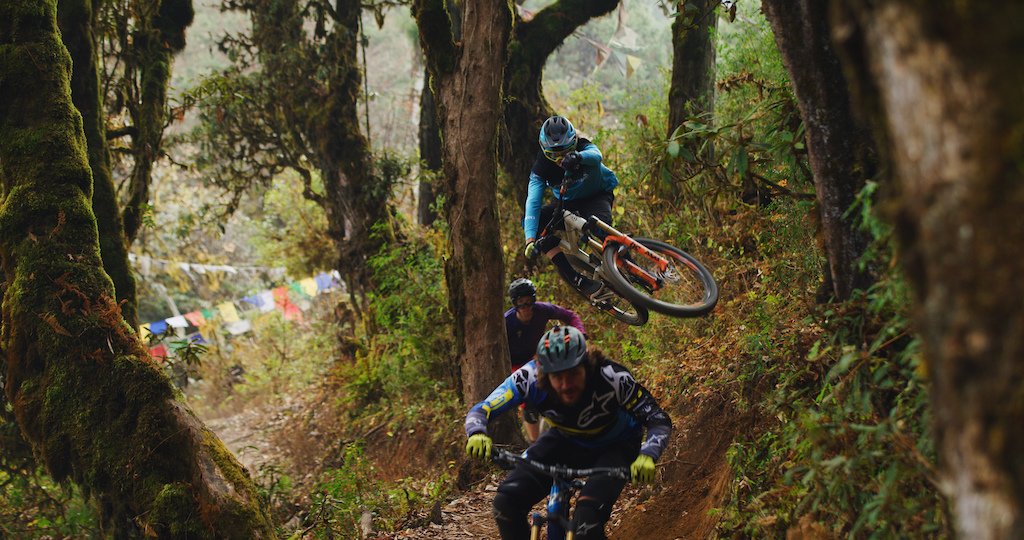 After shuttling to Limbukha, the Madman Trail of Punakha is up next. At an elevation drop of over 1000m, this is a network of both natural and hand-carved trails running through a mix of pine and oak forests. It is here that Bhutan will host its first Asian Enduro Series from 5th to 6th of December 2020. 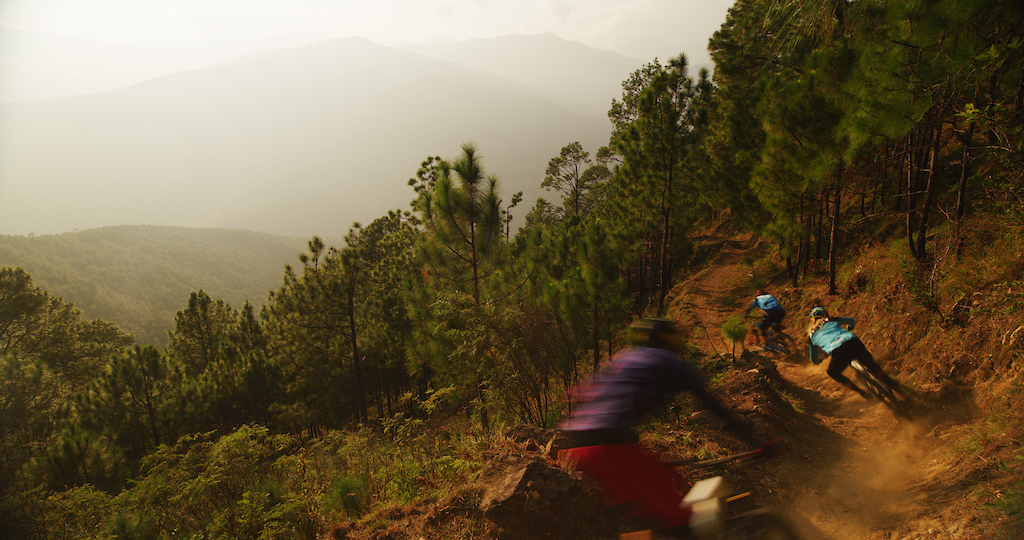 From Limbukha, the filming team along with what looks like the whole Bhutanese enduro scene drop into a series of high-speed berms and jumps on grounds carpeted with oak leaves, along progressively changing terrain. 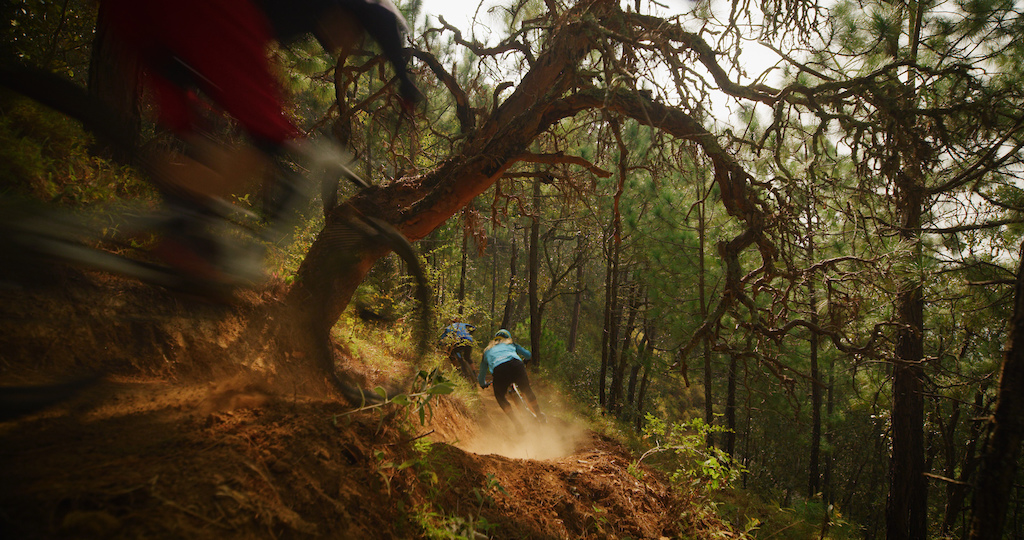 After winding around endless switchbacks, the trail straightens up while the gradient decreases. It gives way to natural gullies, rock-slab chutes, and a final traverse into paddy fields. 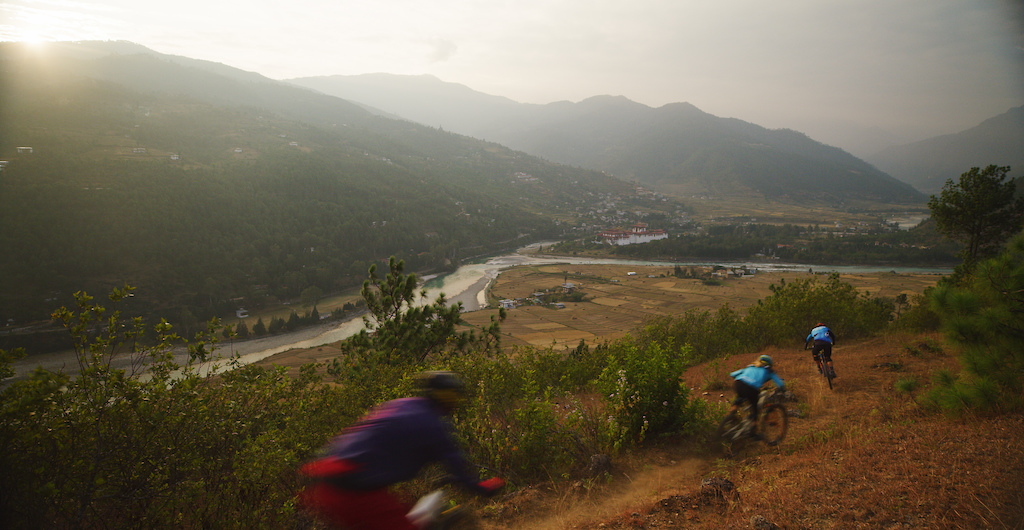 Ride over the longest suspended bridge in Bhutan, chill by the river next to the stunning Punakha Dzong enjoying local delicacies like the Ema Datshi or Phaksha Paa and it’s time to hop back in the truck for another lap! 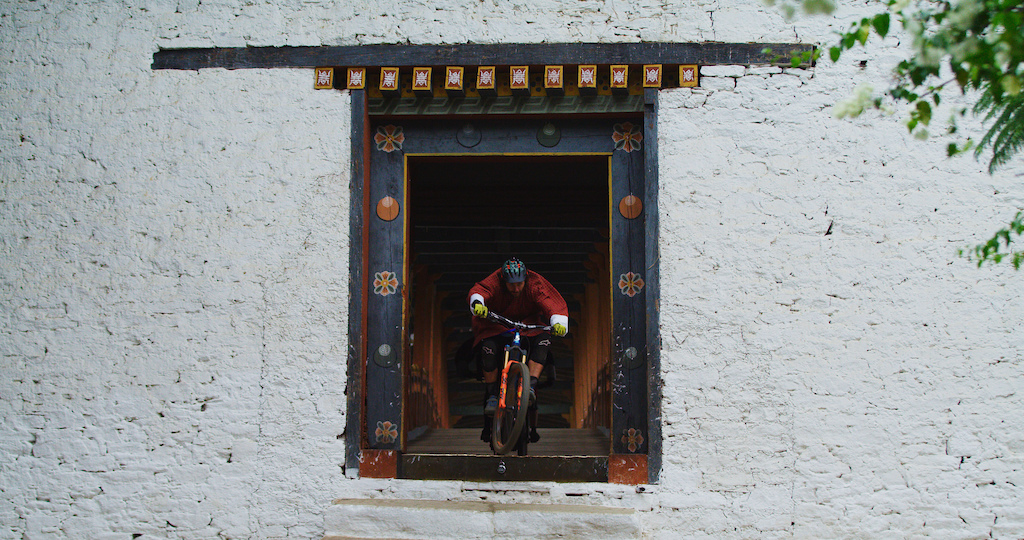 After a couple of days of pure riding, the team decides that the glacial valley of Phobjikha is the next stopover, winter home to the endangered Black-necked cranes. In fact, with more than 70 percent of Bhutan’s land area forested, the nation is among the top ten biodiversity hotspots in the world. 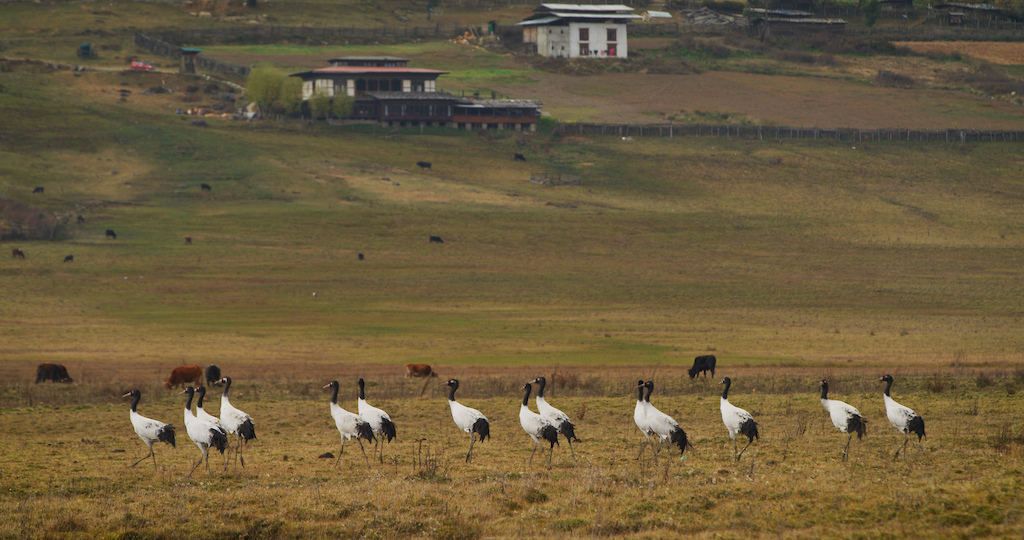 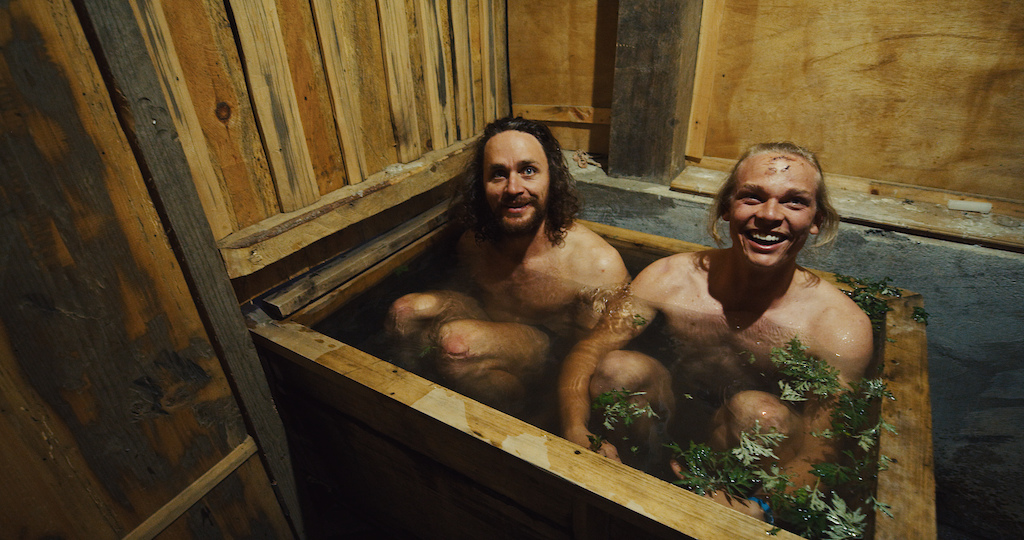 After driving to Lawa-La Pass before dawn, the crew hikes up to a vantage point making sure not to disturb the herd of Yaks grazing around in the dark. The sunrise with the sea of clouds slowly dissipating and exposing the valley rewards their effort. 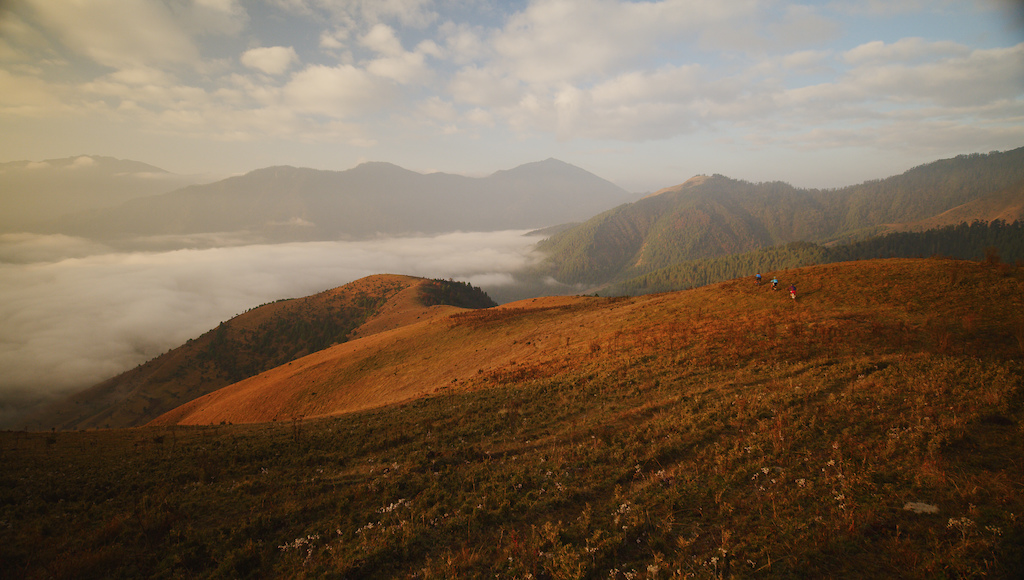 The visiting riders get a sense of the traditional reverence that locals have for the natural environment, organically co-existing with pristine green forests, turquoise glacial rivers, farm fields, and both domesticated and wild animals.

On the way back to the capital city, the team rides a small segment of the 160-mile Tour of the Dragon course, the world’s toughest one-day mountain biking race.

In Thimphu, the riders visit popular sightseeing spots but they do it on their bikes—rolling off the steps of the biggest Buddha statue in the world, wheelieing down the steep descent from the Bhutan Broadcasting Station towers into town and exhibiting wheelies, bunny hops, drops, jumps, endos, and other manoeuvres. 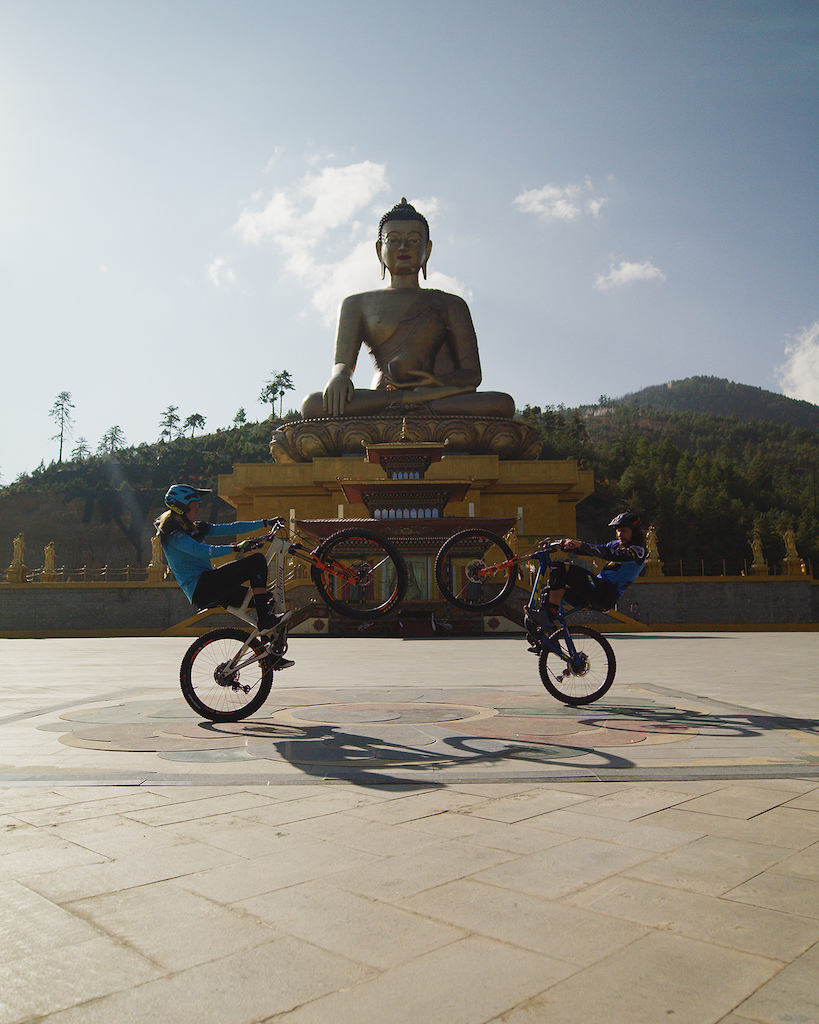 Back in Paro, where the trip started, the local crew had kept cards up their sleeves. Wyn, Cody and Florent are not quite done yet… time to descend 1200m into and out of alpine forests on both sides of the valley, riding consecutively through the Jela and Kila Goenpa trails—two world-class and completely natural single-track trails. 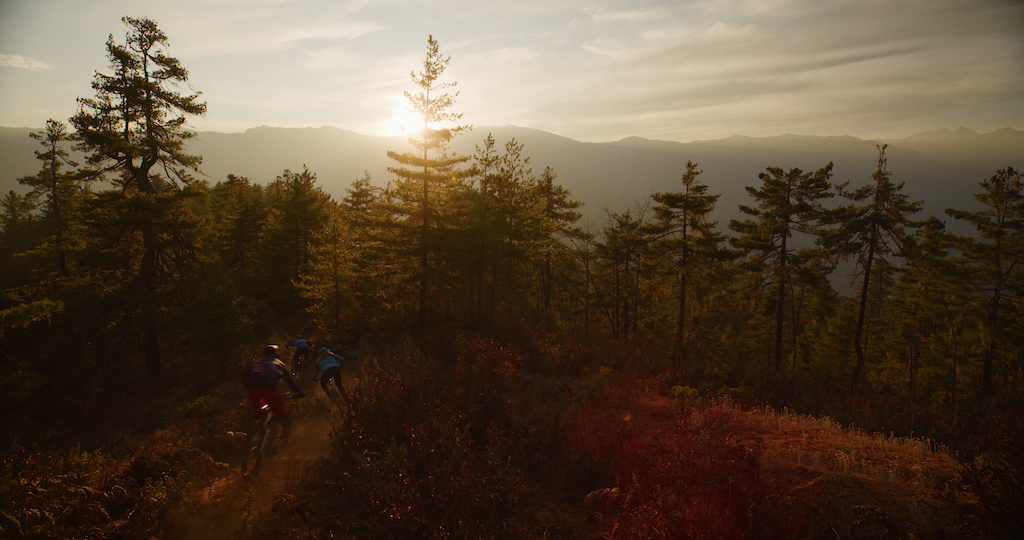 The riders’ giggles and shouts of joy and excitement still resound through the valley. Everyone is left with a feel that 7 days is barely enough to scratch the surface of the mountain biking potential in Bhutan. 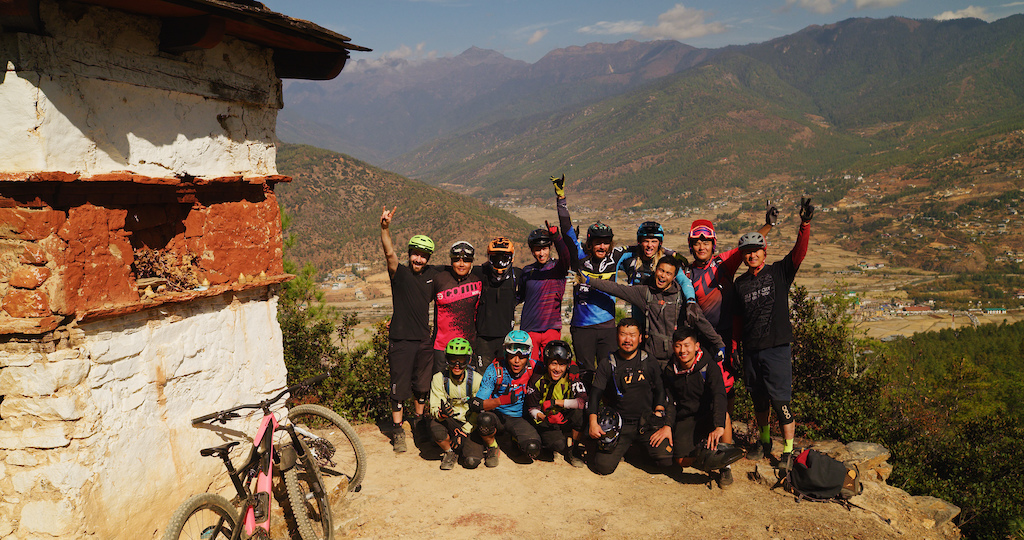 Last up is an encounter with the Tiger’s Nest or Taktsang as locals call it. While legends say that Guru Rinpoche flew from this cliffside on the back of a tigress, our riders climbed their way up the steep trail to reach the sacred monastery, perched precariously on a cliff face at 3120 meters. 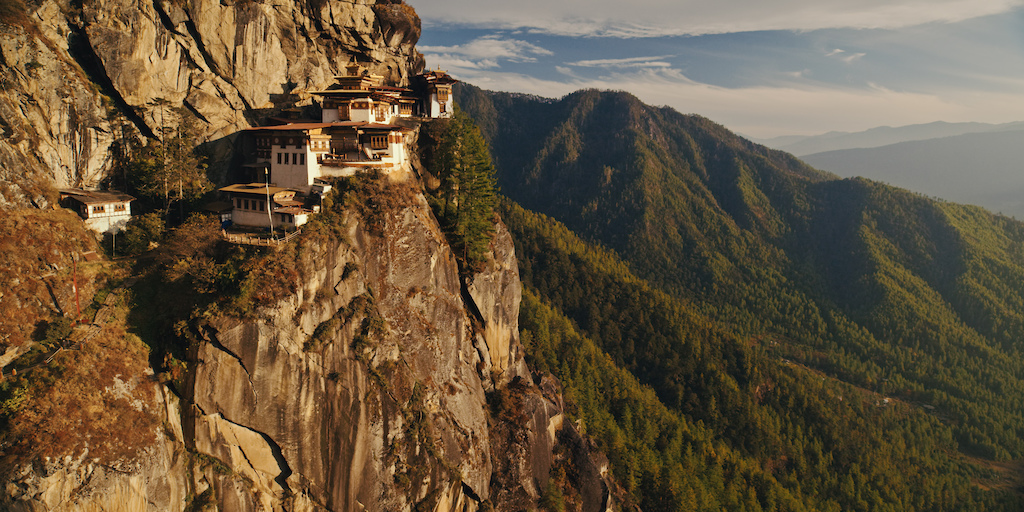 The perfect moment and perfect place for them to meditate and reflect on the adventure they had just lived - an experience which can only be realized through the seamless travel arrangement and meticulous coordination between the Bhutan Philanthropy Ventures and the Bhutan Olympic Committee which spearheads the foundation for sustainable network of Enduro (MTB) development in Bhutan.

For the visiting team of riders, the sacred land of Bhutan is one of the world’s last frontiers. With myths, legends, and spirituality all at once ever-present and still integral to the psyche of local communities, it seems to illustrate the delicate balance between old-world tradition and 21st century modernity and its associated hyper-consumerism. Certainly, with its philosophy of GNH Bhutan is striving to find the right balance. 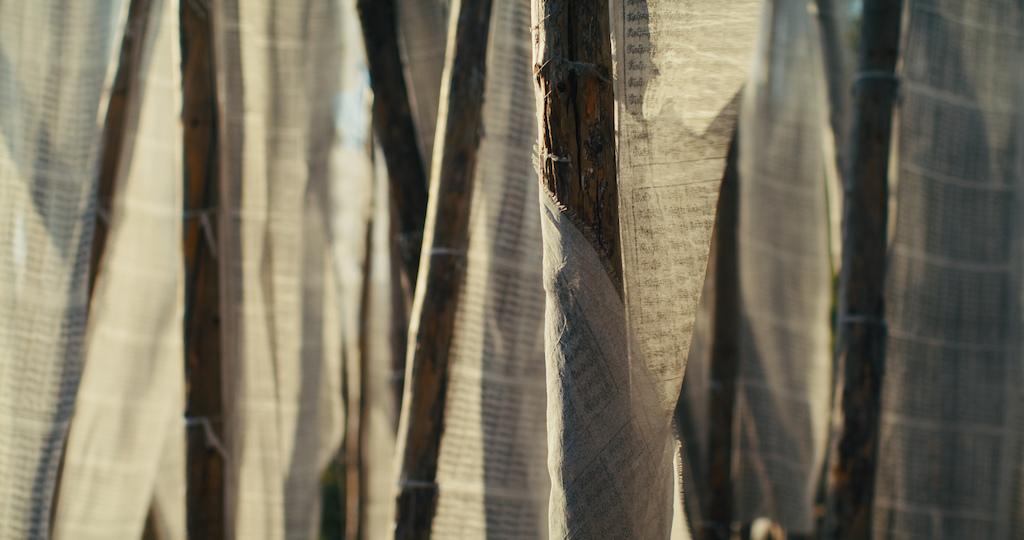 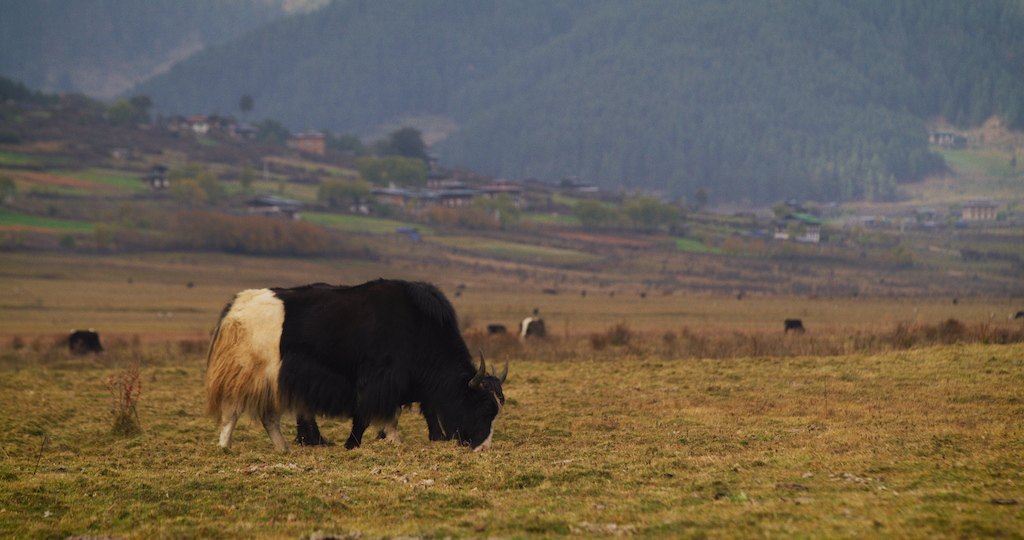 As the team heads back to their own homeland, they do so with the conviction that the best way to discover the Kingdom of Bhutan is by riding into its alluring wilderness. Having encountered a place that is as stunning as it is welcoming and hospitable, the team got stoked in the right spot—the heart—which is what Bhutan does best. 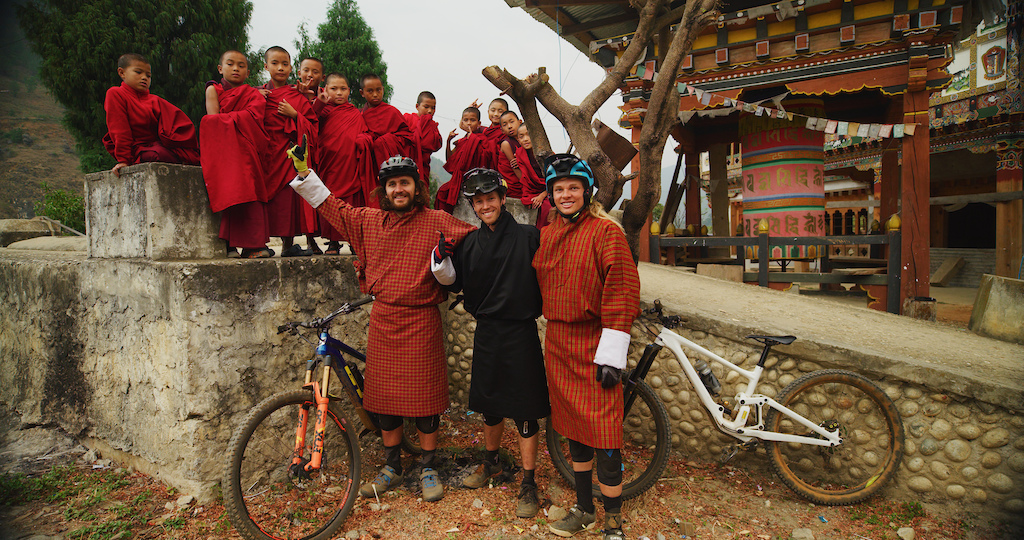 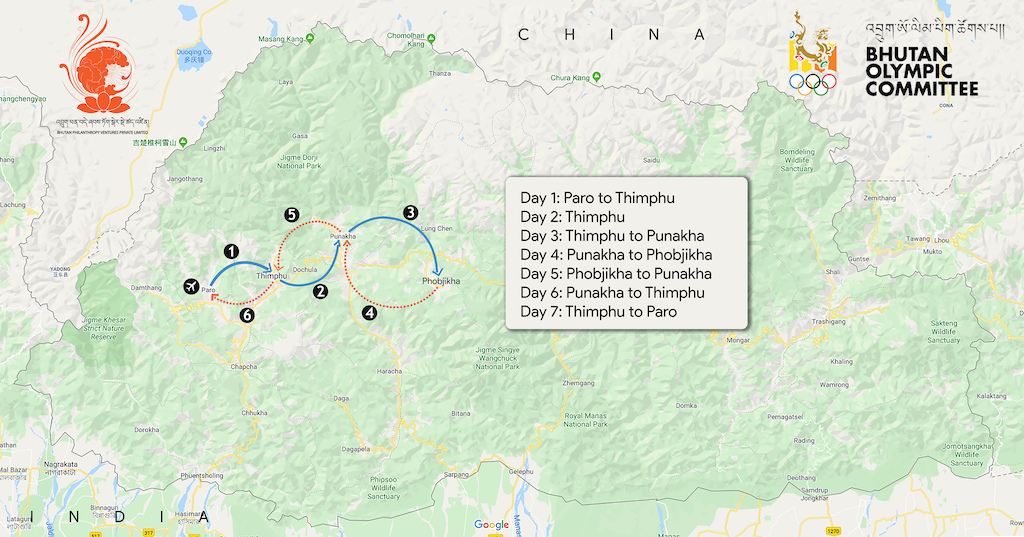 On behalf of those of us that will never likely make it there to ride, I appreciated all of it. The riding, the scenery, the people. All of it.

Also, unrelated note, both of them are on my fantasy EWS team

It's pretty cool that the country of Bhutan supports mountain biking: definitely a dream destination for me, it looks so beautiful!

VPS13 (Mar 11, 2020 at 7:43)
I went in 2007 and it was a truly amazing place. We spent a day hiking up and having tea in a hut looking towards the Tiger's Nest, its a very neat country with a rich traditional history. On various hikes we went on all I could think about was wishing I had my bike with me, fair warning that elevation is much more of a factor over there

Also give betel nut a try and see how you handle that...

powaymatt (Mar 11, 2020 at 8:50)
Quite possibly the most mellow and captivating mtb video I’ve ever watch. Nice work delivering the goods.

FlorentVN (Mar 11, 2020 at 5:34)
I'd say it's ready and in prime condition. The beauty of the riding in Bhutan is in its natural state. It will and should not become another bike park. The madman trails network in Punakha are 50% handmade and is pretty much done now. For the rest, it's a variety of ancient alpine trails connecting valleys with average 1000m elevation drop that have been fixed and improved for the mountainbikes by local clubs and guides.

PauRexs (Mar 11, 2020 at 6:39)
@FlorentVN: that's exactly what I am looking for.
Where I lived in Ainsa Zona Zero they did exactly the same, I am referring to this kind of trail network.

FlorentVN (Mar 11, 2020 at 7:12)
@PauRexs: that's exactly what you'll find there but with a lot of elevation drop. I have great memories from EWS Ainsa. That's the type of trails i enjoy riding.

PauRexs (Mar 11, 2020 at 8:01)
@FlorentVN: yesss well in fact any human mtb rider with a soul should enjoy over expectations the fact of riding pure natural pristine trails sorrounded by great culture and people.

HCorey (Mar 11, 2020 at 7:15)
Loved the paralell drawn between the twisting river/bermed trail as shot from above. sick

RXN059 (Mar 11, 2020 at 7:55)
Okay so the thing about Bhutan is that it's cool and all, but they have some... interesting artwork. Like everywhere. Check out Anthony Bourdain's "No Reservations" from there (NSFW). It's honestly impressive how they keep it out of all the photos. I think Casey Brown and Cam McCaul were there recently, as well.

oneheckler (Mar 11, 2020 at 15:31)
Just wonderful,rhe richness they have in simple things,enjoy while you can ,I still think when I ride near my home (nothing comparable in terms of the Single tracks going down,but in the way up It might be much easier :-)) )that I’m blessed cause I can forget everything and still have my sacred place ,ride on people just ride on ,have fun no matter how little it is

irideafrica (Mar 11, 2020 at 5:03)
Wow! What an incredible destination. Bucketlist book is getting too full!

Planetx888 (Mar 11, 2020 at 19:03)
Beautiful video and I’m all for mountain biking and trails being a tool to elevate communities, but maybe the Prince of Bhutan should be focused on their refugee problem? It’s kinda skeevy that it seems like this project was basically backed by the Bhutanese government, as opposed to just a local trail org. Maybe I’m wrong? Bhutan has a pretty serious dark side attached to all the great press it has been getting lately. I was a social worker in the Massachusetts public school system, and at one point, about 10% of my caseload was comprised of Bhutanese kids who came to the US after living in refugee camps in Nepal. Maybe some of ‘em will have a chance to learn to ride here in the US.

If you are curious, google “Bhutanese Refugees” for more info.

uberstein (Mar 11, 2020 at 7:05)
@FlorentVN:
suspension links are white instead of black. Custom touch, or different color option for Asia?

And he makes it looks sooo stylish and easy!

BlackPeak (Mar 12, 2020 at 19:48)
Nice video. Captures the country well. I've been running guided trips there since 2004. Check out www.blackpeaktravel.com if you want the full run down.

tacklingdummy (Mar 11, 2020 at 8:19)
Great video. Looks like an adventure. However, why to they have a race a such a difficult place to get to? Probably several days of just travel for western countries to get there.