Video: Manon Carpenter & Friends Bikepack to the Highest Point in Finland Near the Arctic Circle

Join us on our four day bike-packing trip to the highest point in Finland – Halti (1324 m) – in the very north of the country, up above the Arctic Circle.

"Journey to Halti is a four day bike-packing trip born from a slightly hare-brained idea three years ago, that saw us trying to reach the highest point in Finland – above the Arctic Circle, in the middle of winter, on skis. It was my first time on skis (brave or stupid, you decide), -28 degrees C when we set off and at the end of the year when the sun no longer rises in Lapland. We only made it halfway, faced soft snow and a lack of established skiing routes that early in winter, so it’s been an incomplete mission since then.

Christian moved nearby for work in 2020, and me visiting for summer presented the perfect opportunity to try reaching Halti again – this time by bike. We had no idea what the trail would be like, and were aware that it might not be rideable. With a very literal rocky start, and slow-going flat sections and climbs, we were rewarded with descents that we could actually ride to enjoy. Smooth sections in between the boulders felt like the best trail ever! Four days out in the vastness of Käsivarsi Wilderness Area, with everything we needed on us or our bikes, was a great way to complete the mission of Halti, three years on.”

In Finland the ‘Everyman’s Right’ allows every person the freedom to go where they like, responsibly, in nature - including by bike - with the exception of national parks where you’re encouraged to stick to the trail, and avoid protected areas. In national parks unlocked wilderness cabins are open to everyone who respects the rules to leave things the way you found them (or better!), and make multi-day excursions into the outdoors so much easier. On this trip wilderness cabins provided shelter, beds and cooking facilities which meant we only needed to carry food, spares and sleeping bags – with pristine water readily available from the many rivers and lakes we passed.

Riding out into a wilderness area and finding no one else around, a wood burner ready to light and a lake to dip in at the end of the day is a pretty special experience, and something that makes you appreciate wilder spaces all the more – and the invitation to roam in them, freely. 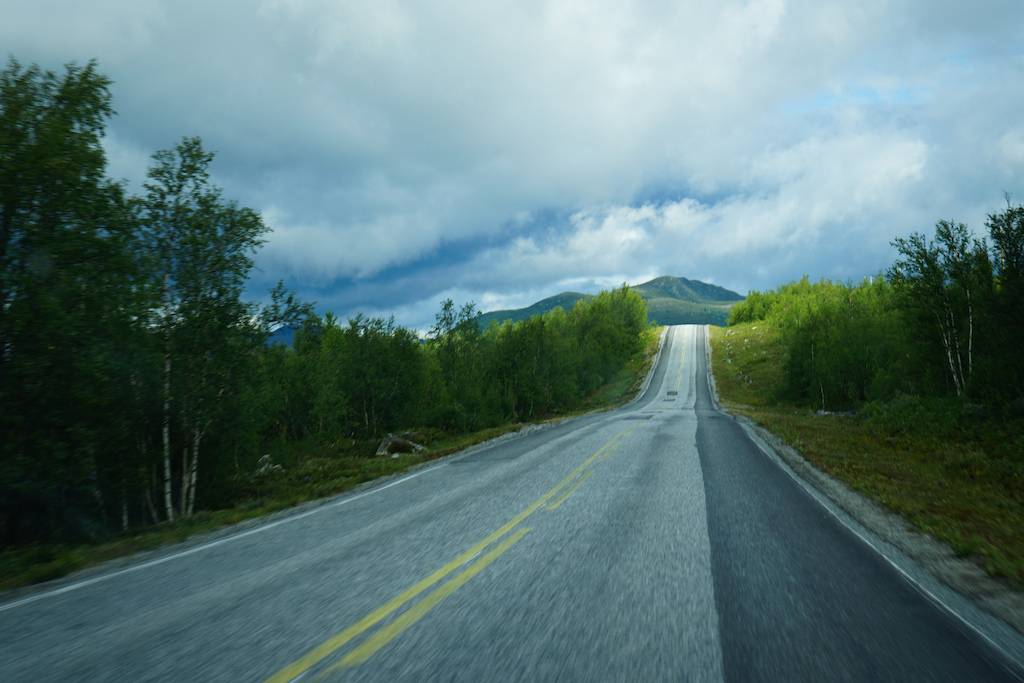 Mountains appearing from the otherwise mellow and rolling landscape, on the way to the trailhead. 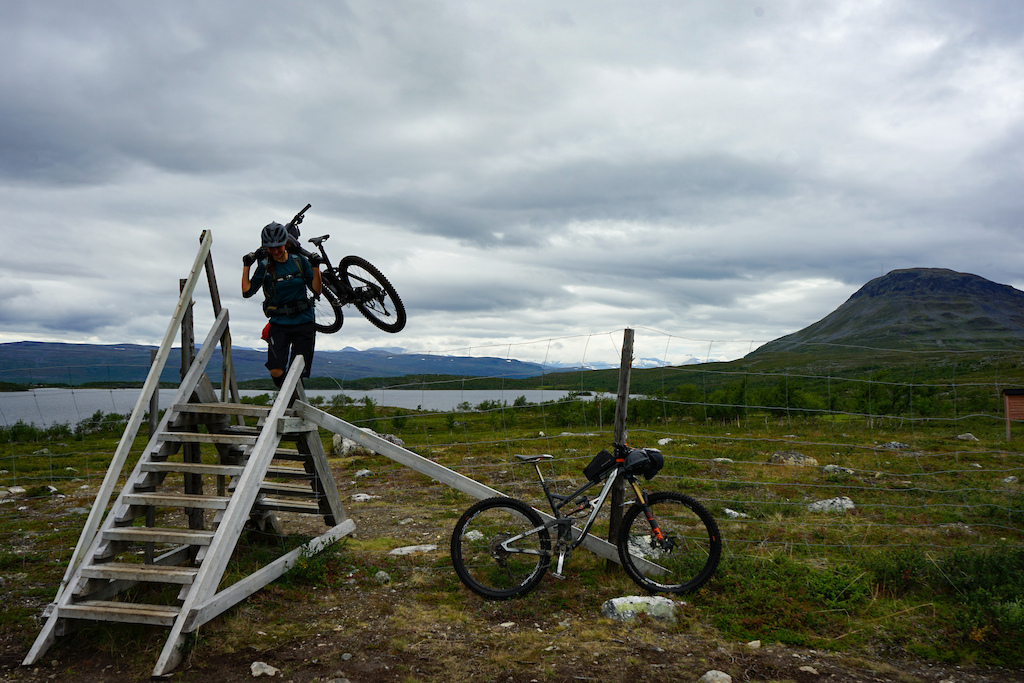 Heading out from our starting point near Kilpisjarvi, 69 degrees north. In the background is the recognisable shape of Saana - a sacred fell of the Sámi people - which has a protected nature reserve and research area with restricted access during the summer months. 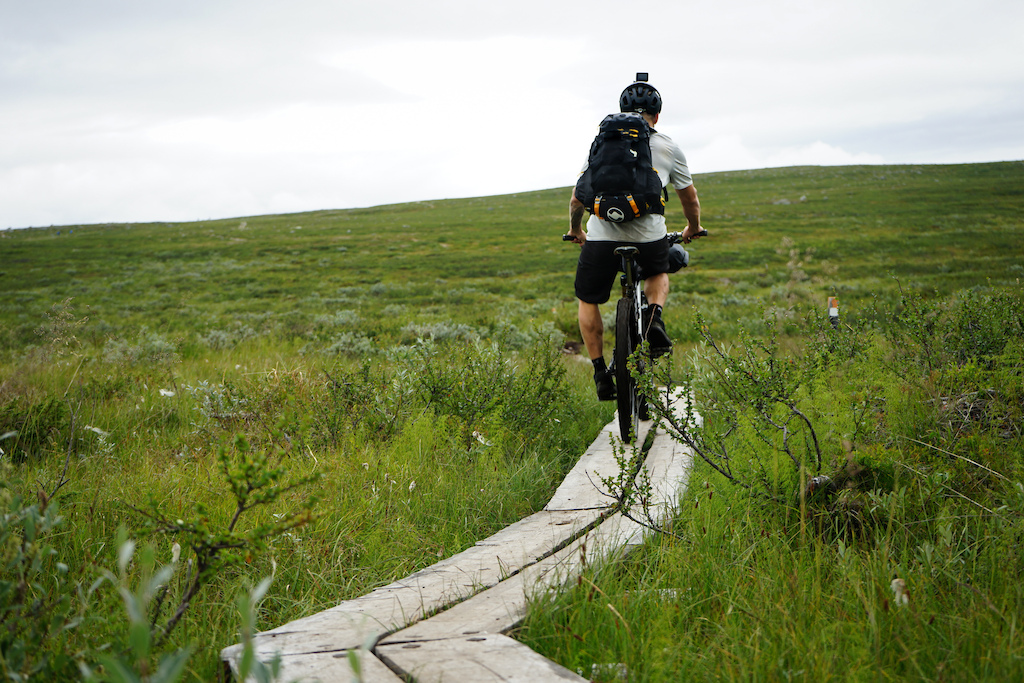 Wooden boardwalks offer brief respite from the rocky start to the trail. 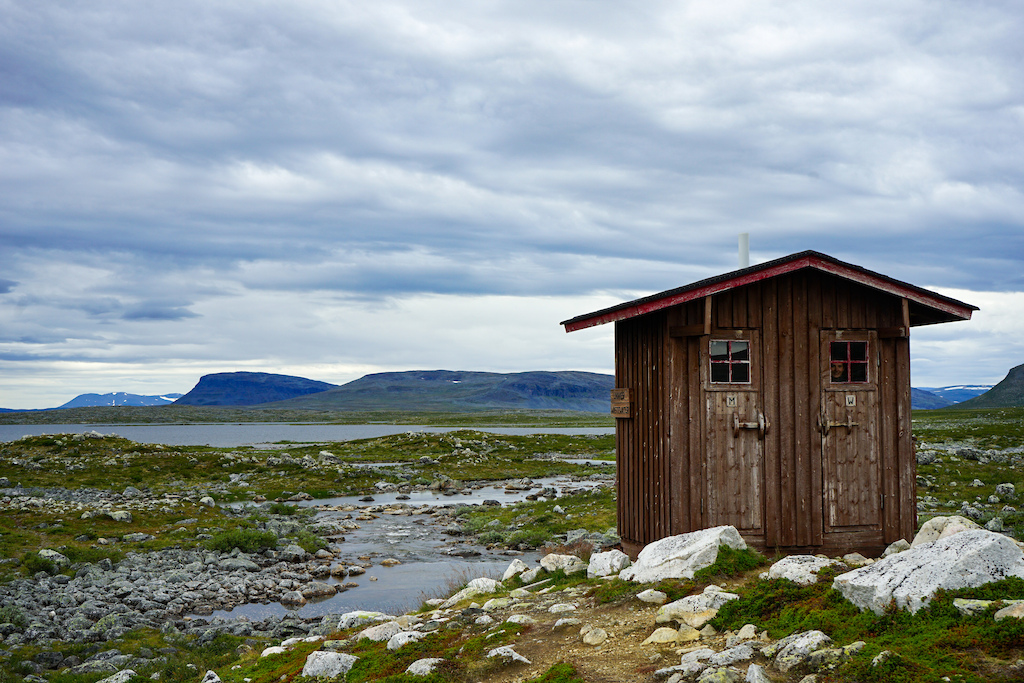 Where's Wally? A quick stop at the first cabin's WC, 12 km out from the trailhead. 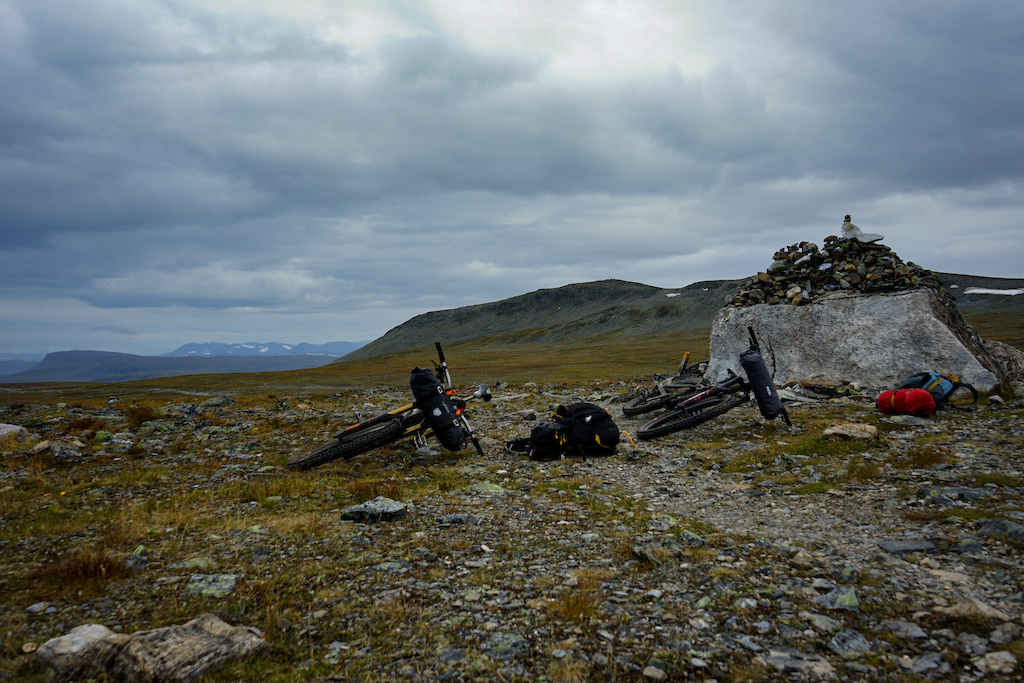 The highest point for the first day - with some hardy plants amongst the otherwise barren rocks. 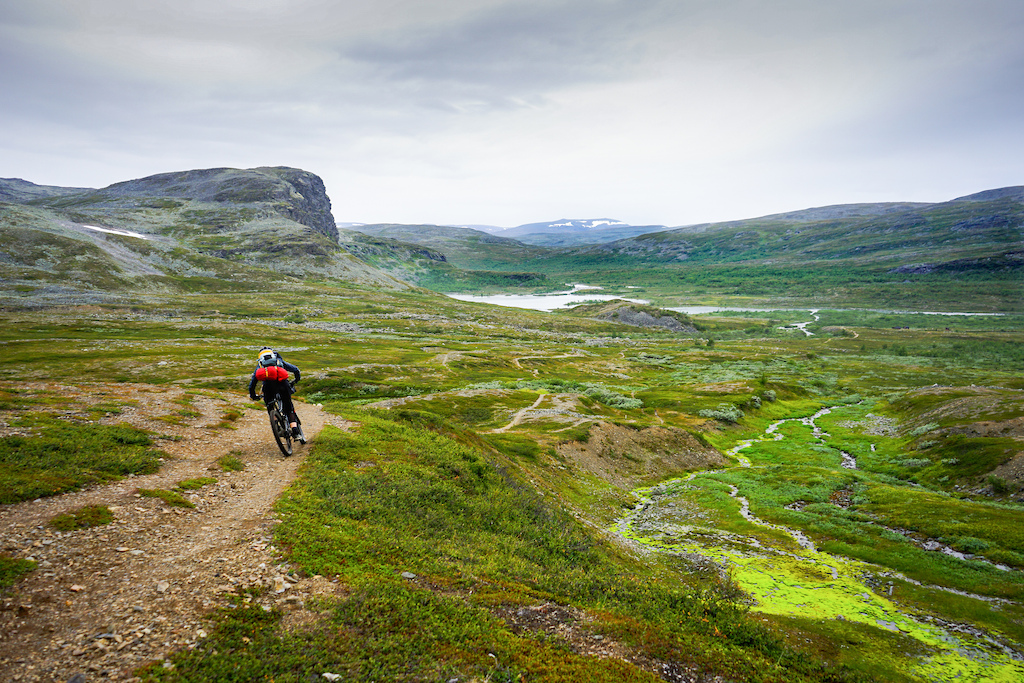 Heading down to the night’s cabin, with incredible greens lighting up the landscape. 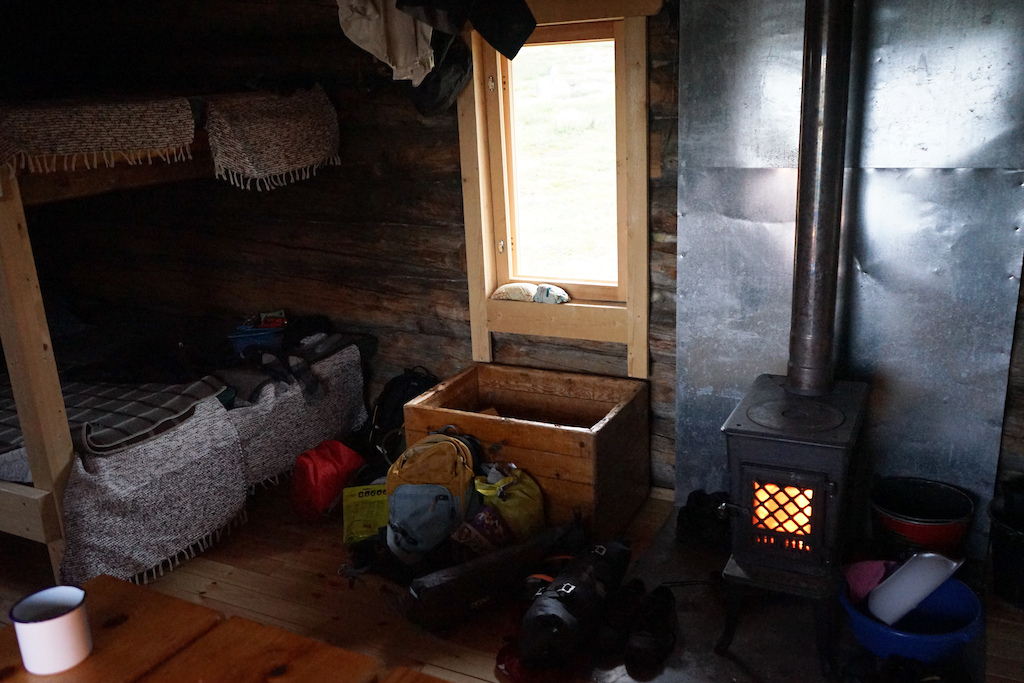 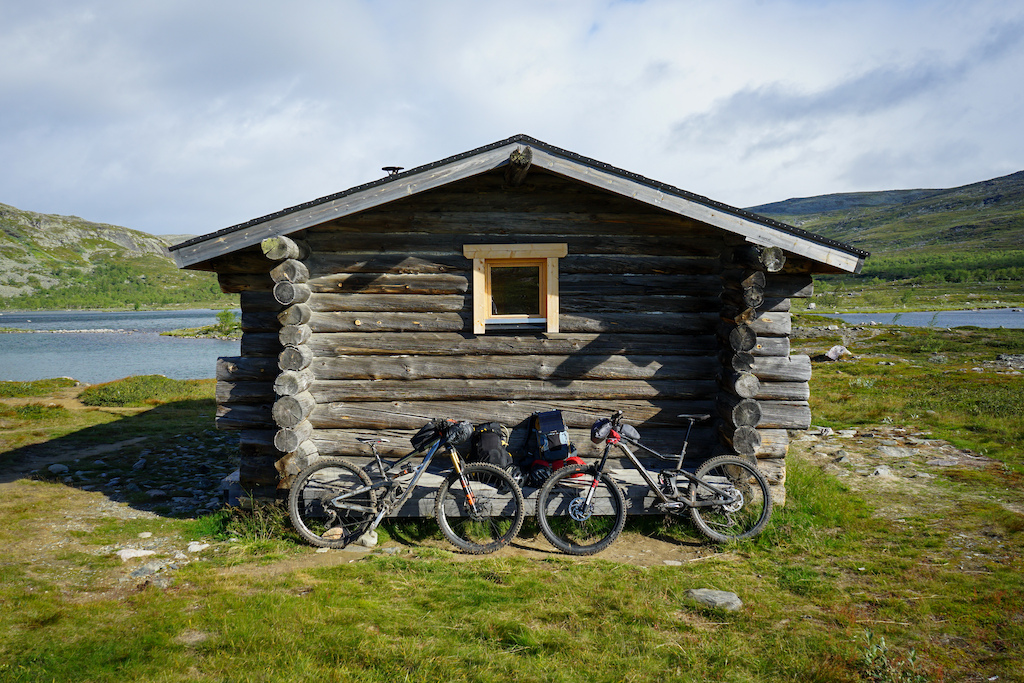 Welcomed by a cabin, all to ourselves, with a refresh in the lake and a decent feed before setting out the next day. 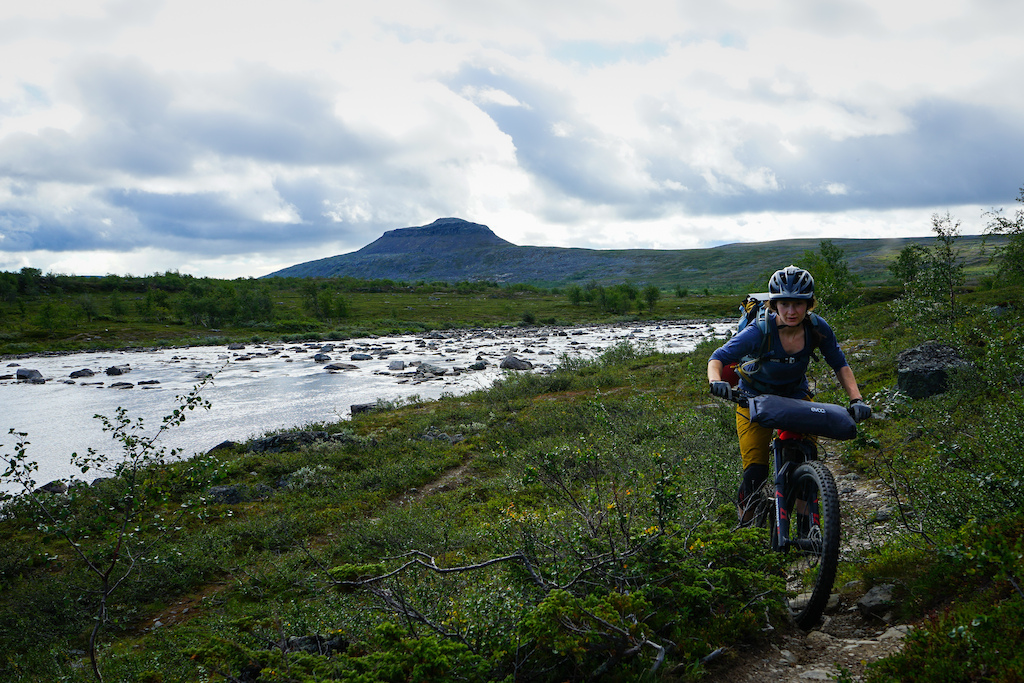 The trail was a mix of technical rock in between smoother sections and total boulder fields. A combination of bike riding, pushing and carrying kept us moving. 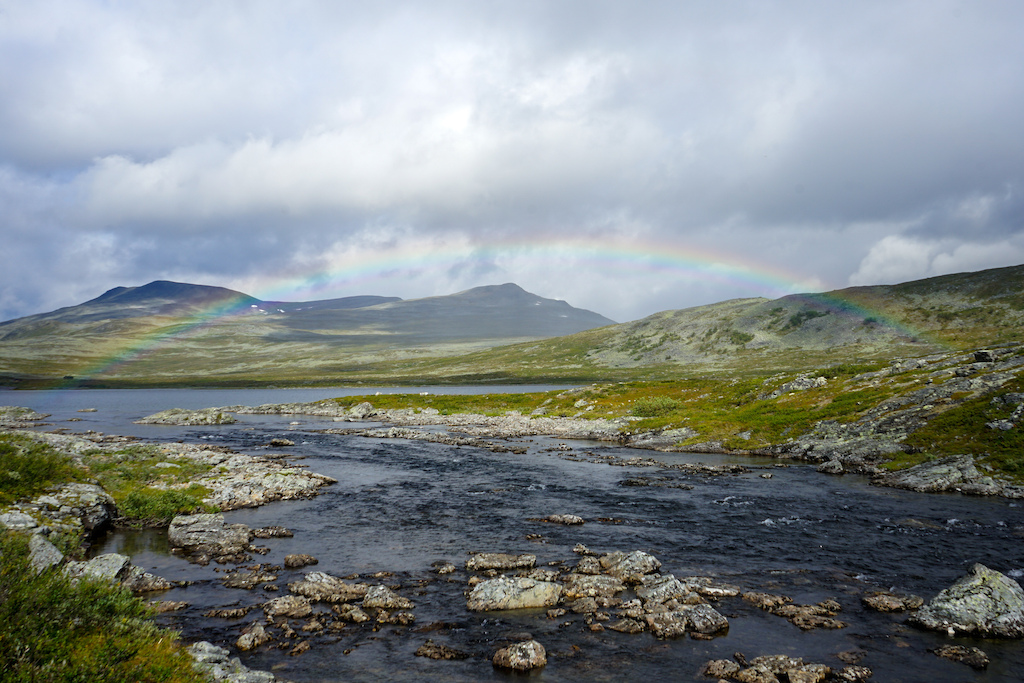 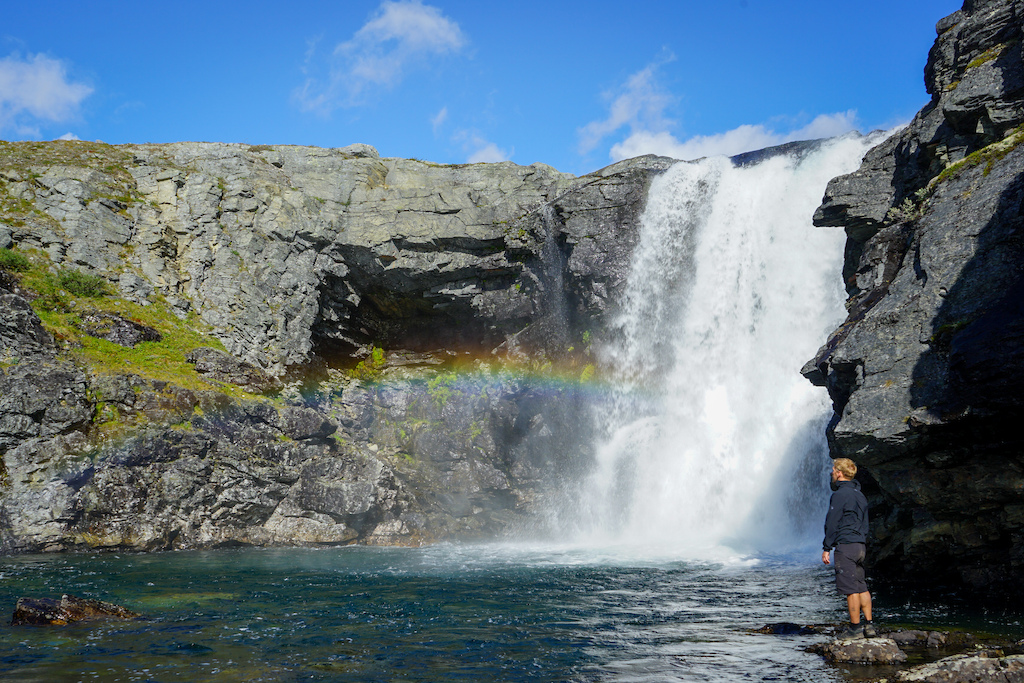 The weather changed constantly, with bright skies turning to showers, to gloomy clouds and back again - often with a rainbow thrown in for good measure. 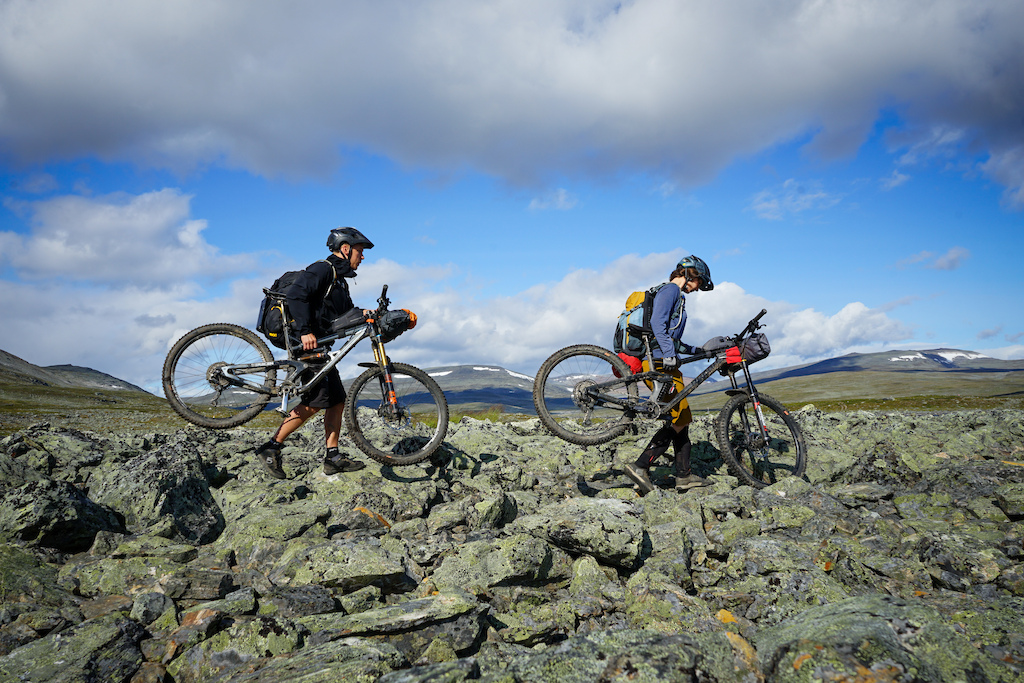 The flattest sections of the trail alongside lakes or rivers often coincided with serious boulder fields. 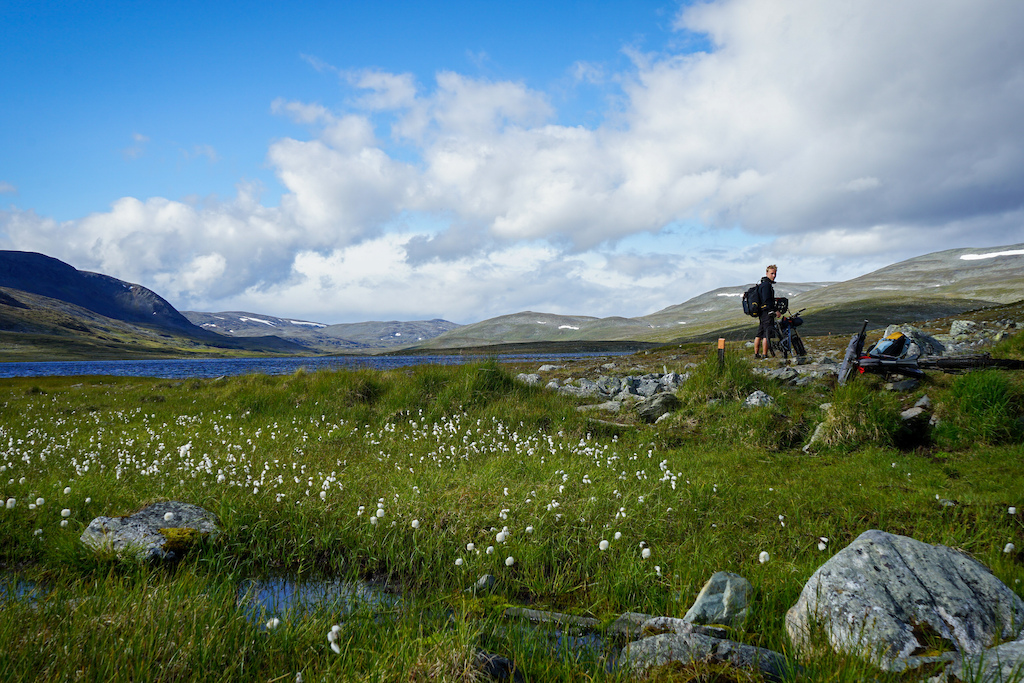 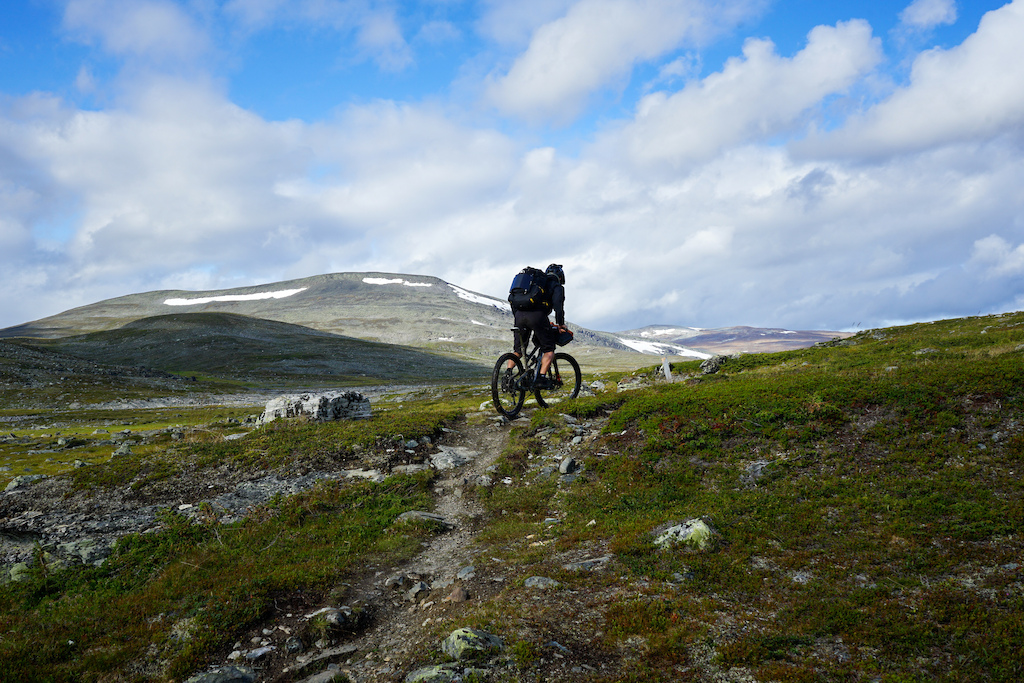 Heading up towards Halti, and getting closer to the snow. 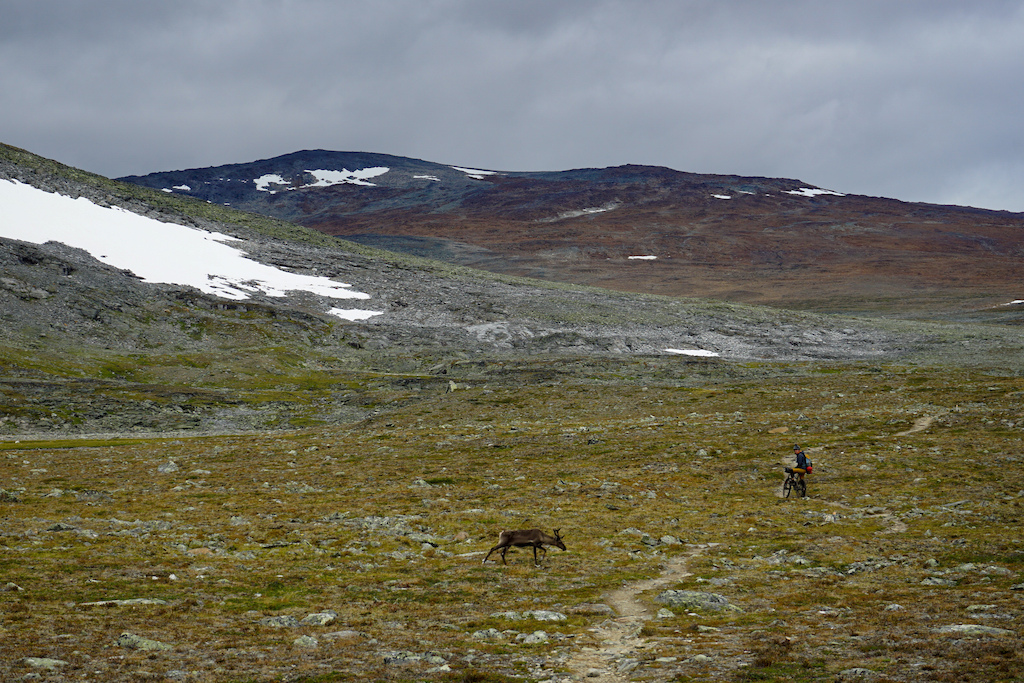 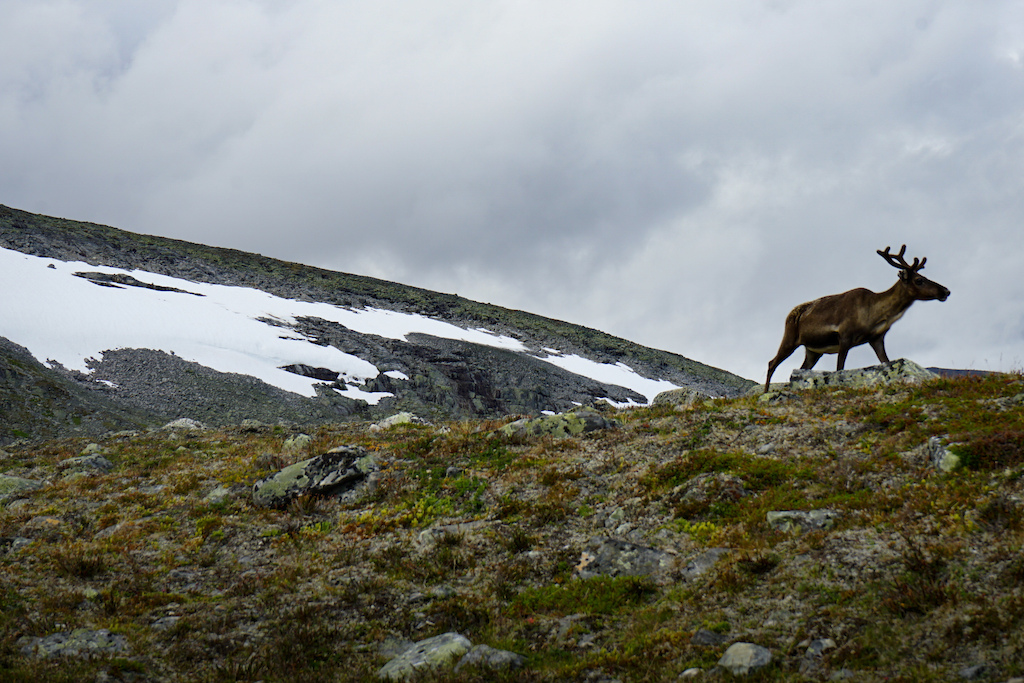 Not your typical trailside companion! 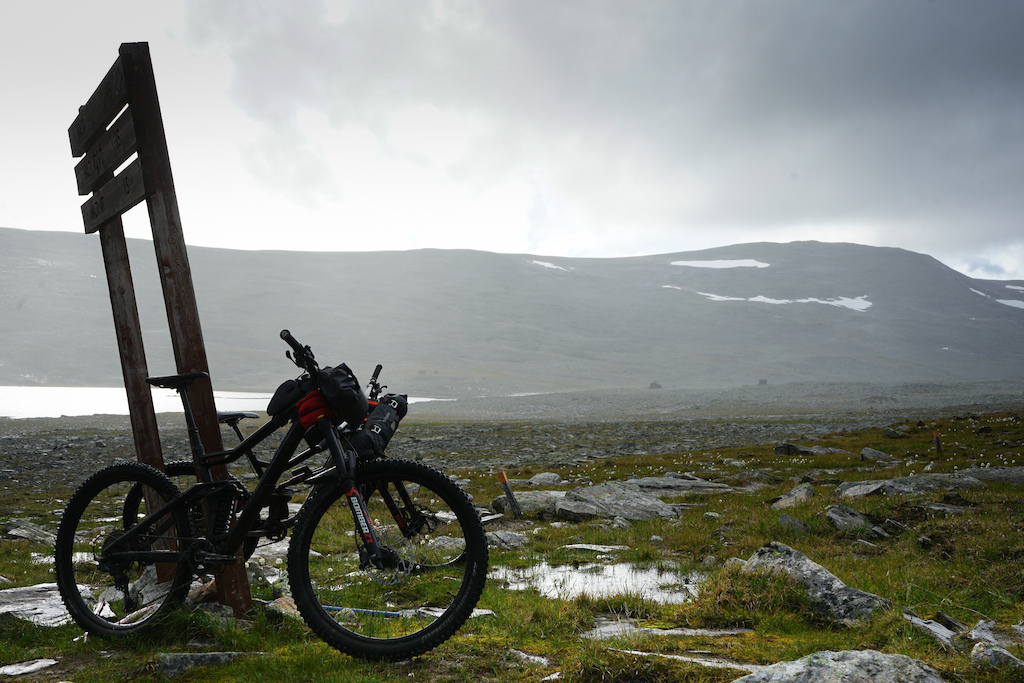 At the base of the last 4.5 km to the top of Halti. In the ten minutes we stood here debating how much daylight we had left, we had blue skies, ominous clouds and showers sweeping across the valley floor. Our cabin for the night is in the distance, but first there is the top of Halti to reach, before dark. 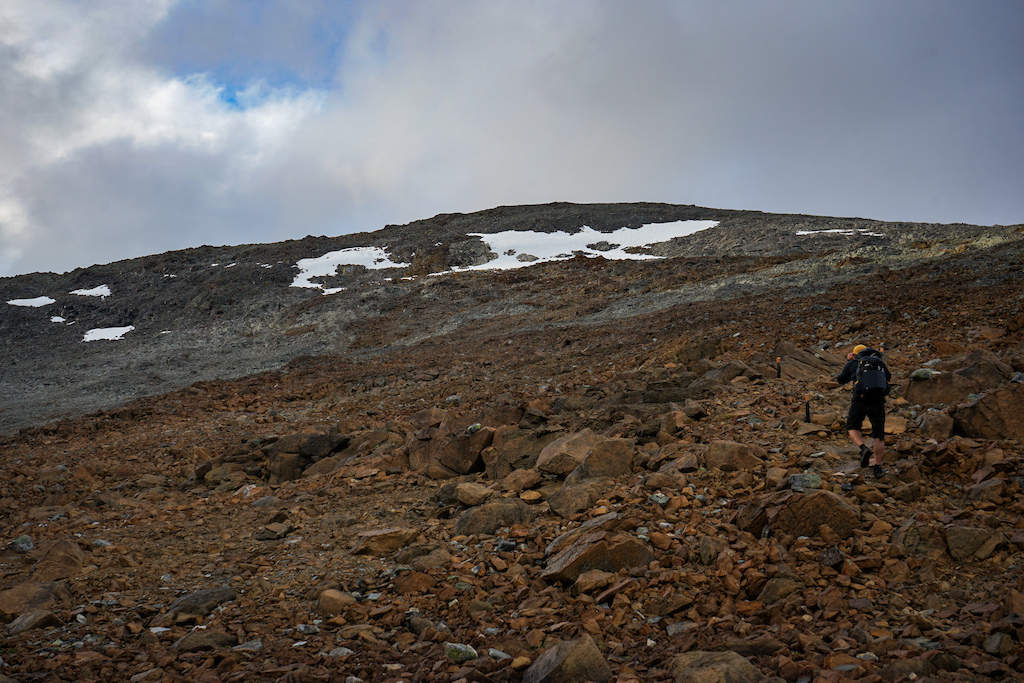 We ditched the bikes 3 km from the top as the trail became a mass of boulders, and carried on by foot. 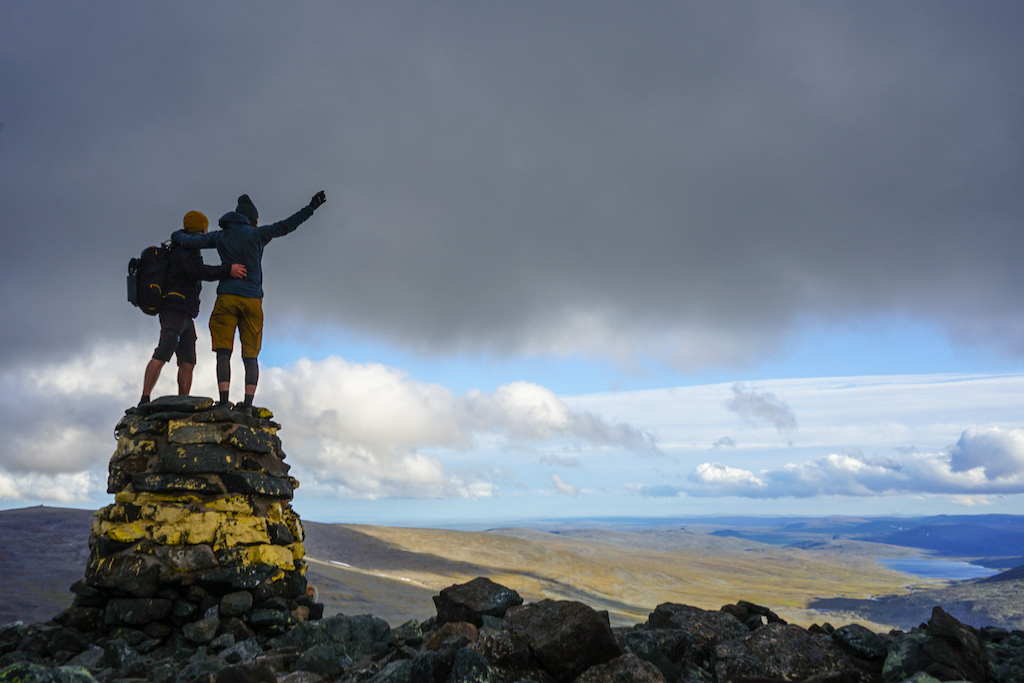 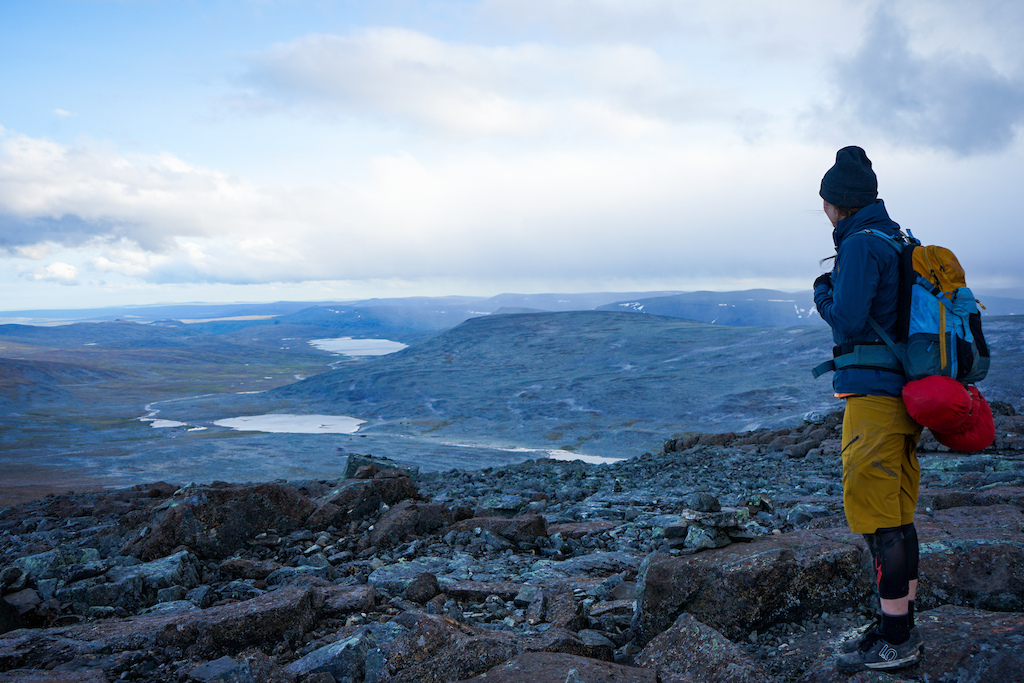 The highest point in Finland! Looking back on what we’d travelled through the previous two days. 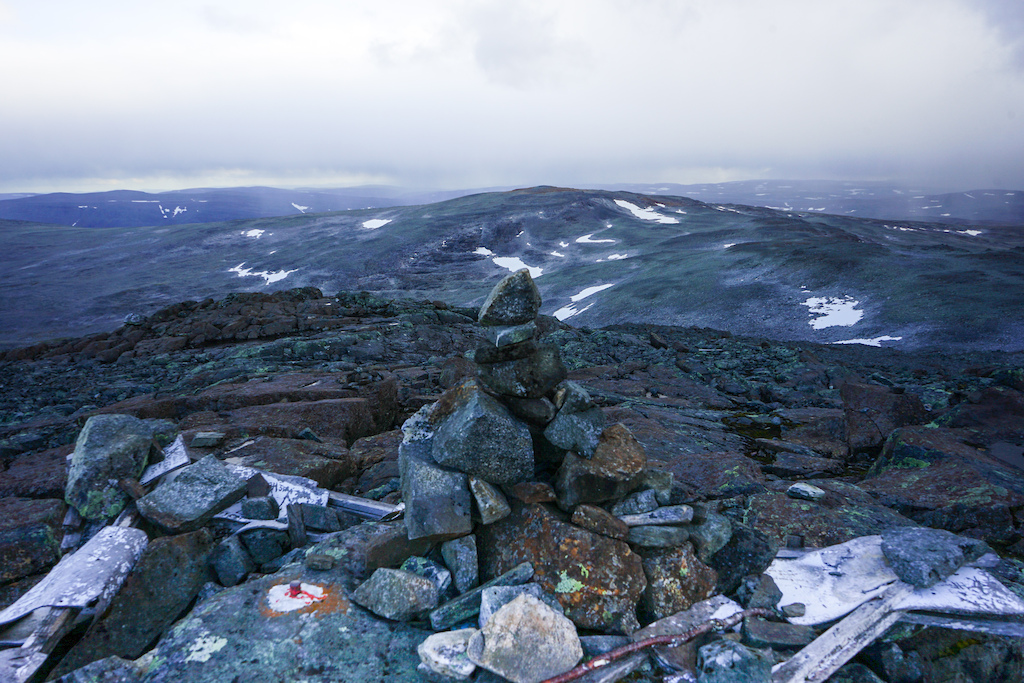 A short walk away is the actual peak of Halti, just over the border in Norway. 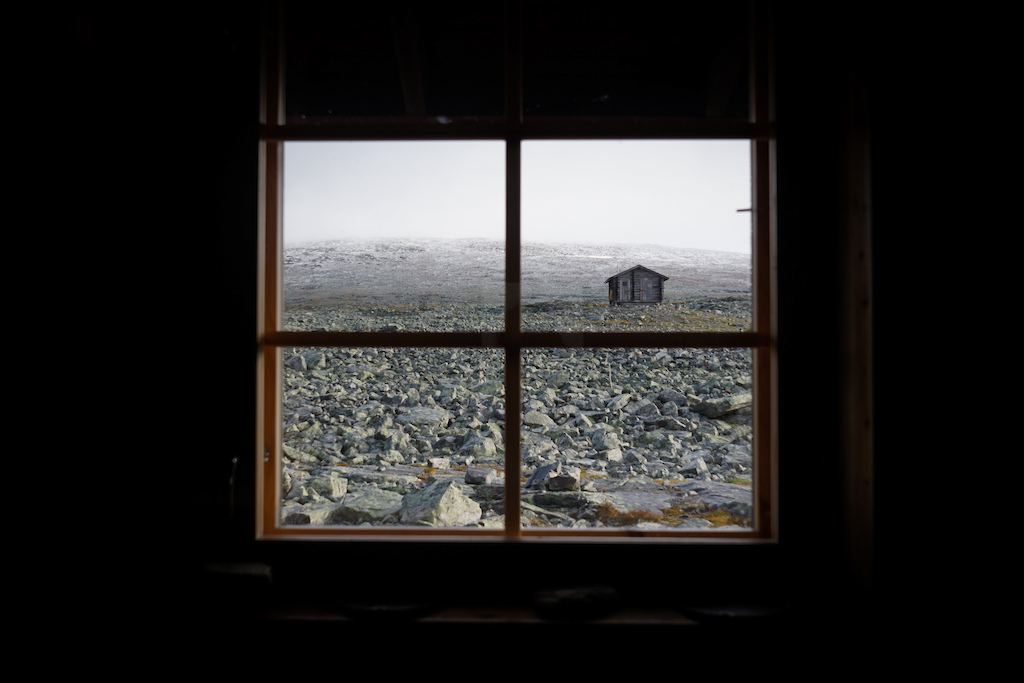 Strong winds whipped around the cabin during the night, and we woke up to a dusting of snow on the hills around us. 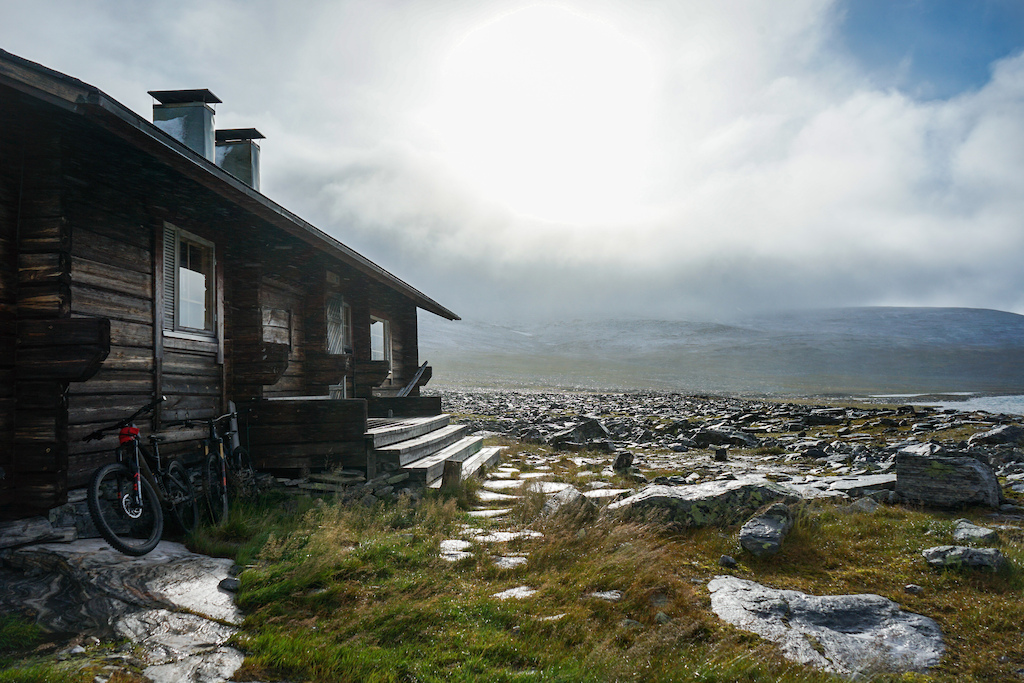 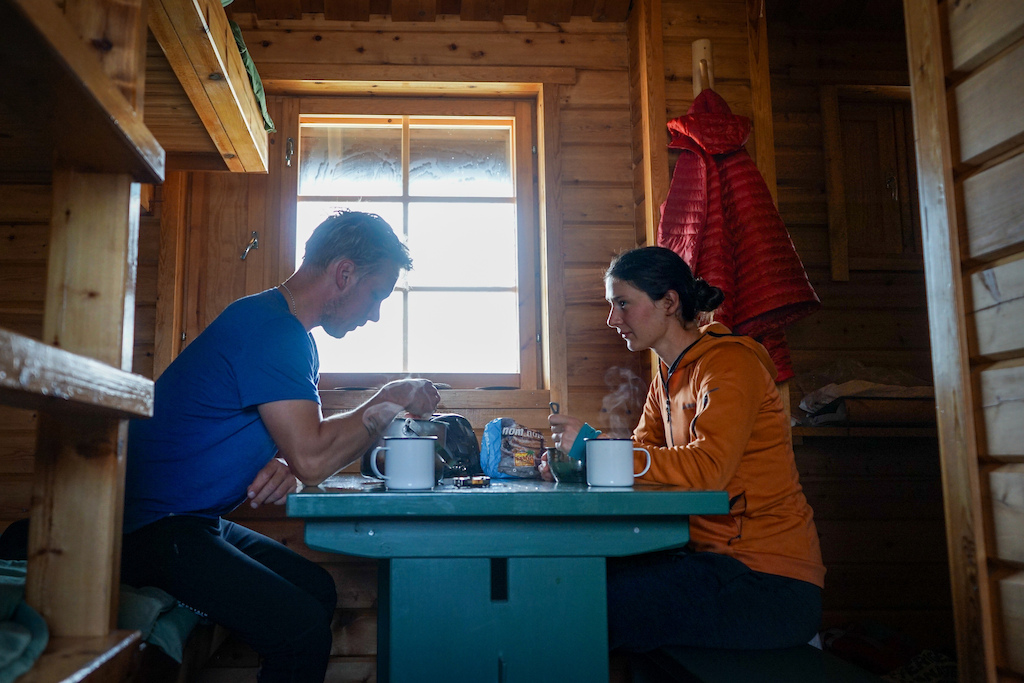 We took a little longer over coffee and basic porridge that morning. 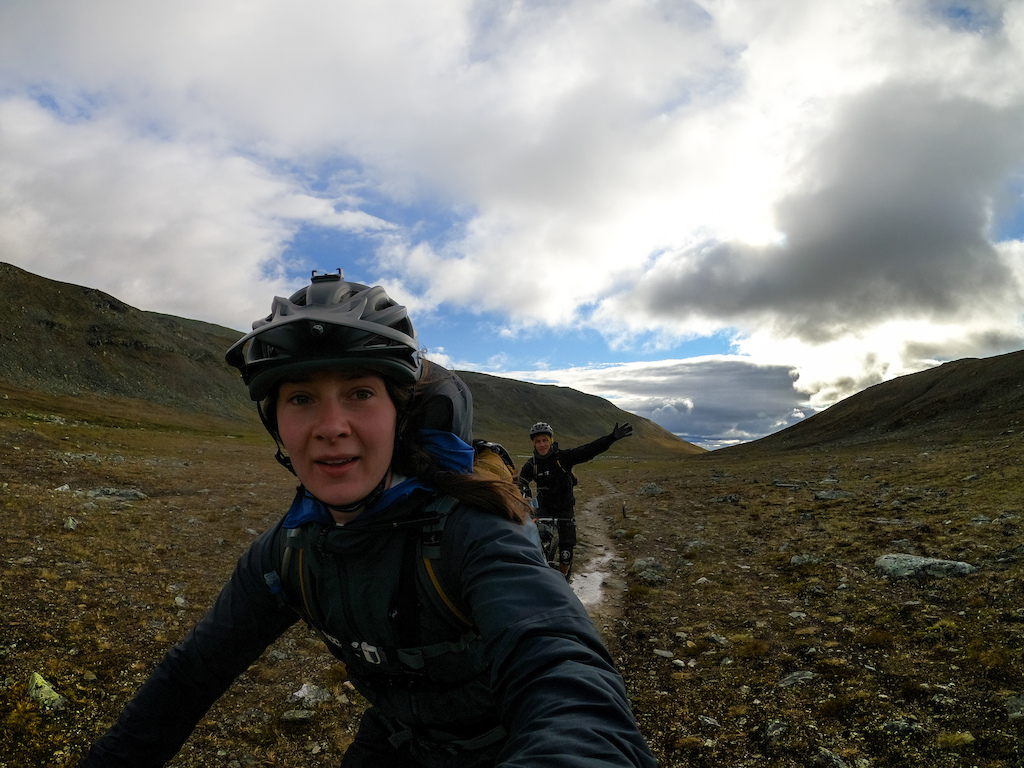 Day three, heading back down the way we had come with energy, food supplies and batteries getting a little low. 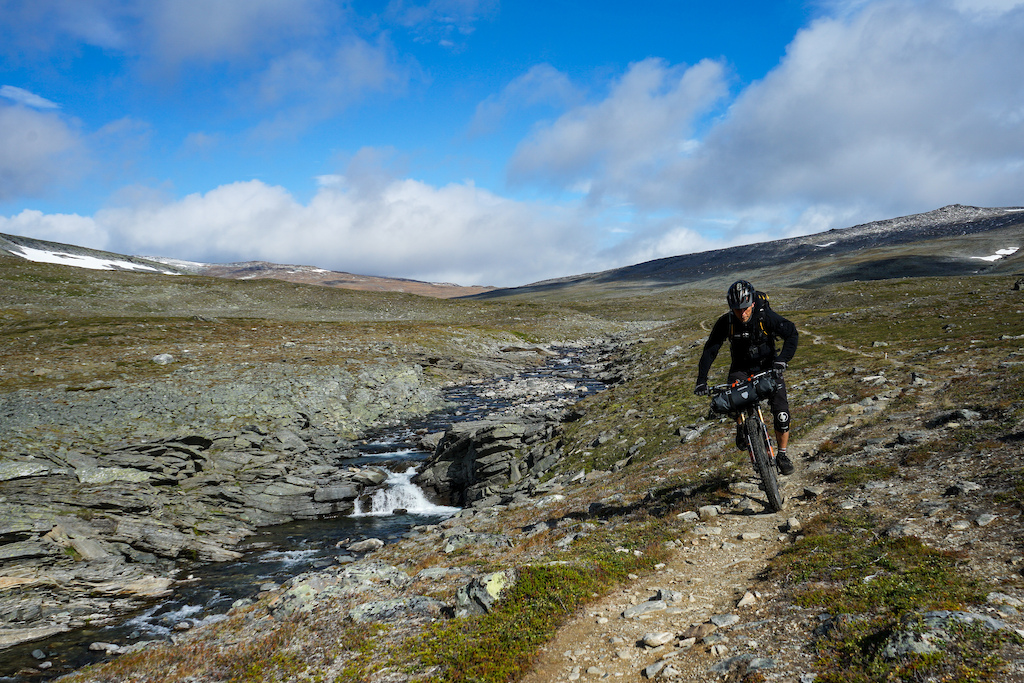 Our fourth and final day led us back up the pass we’d come over on the first day, with winds picking up again for the journey back to Kilpisjärvi. 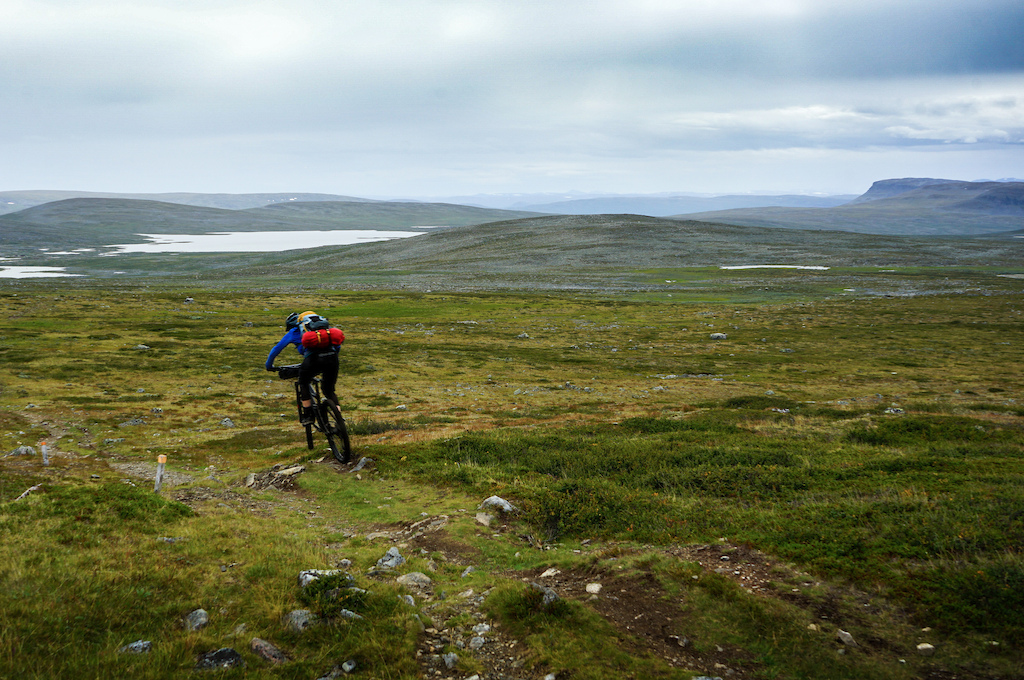 Enjoying the descent back down the other side, before a final mission along 12 km of mostly flat, rocky traverse to finish the trip. 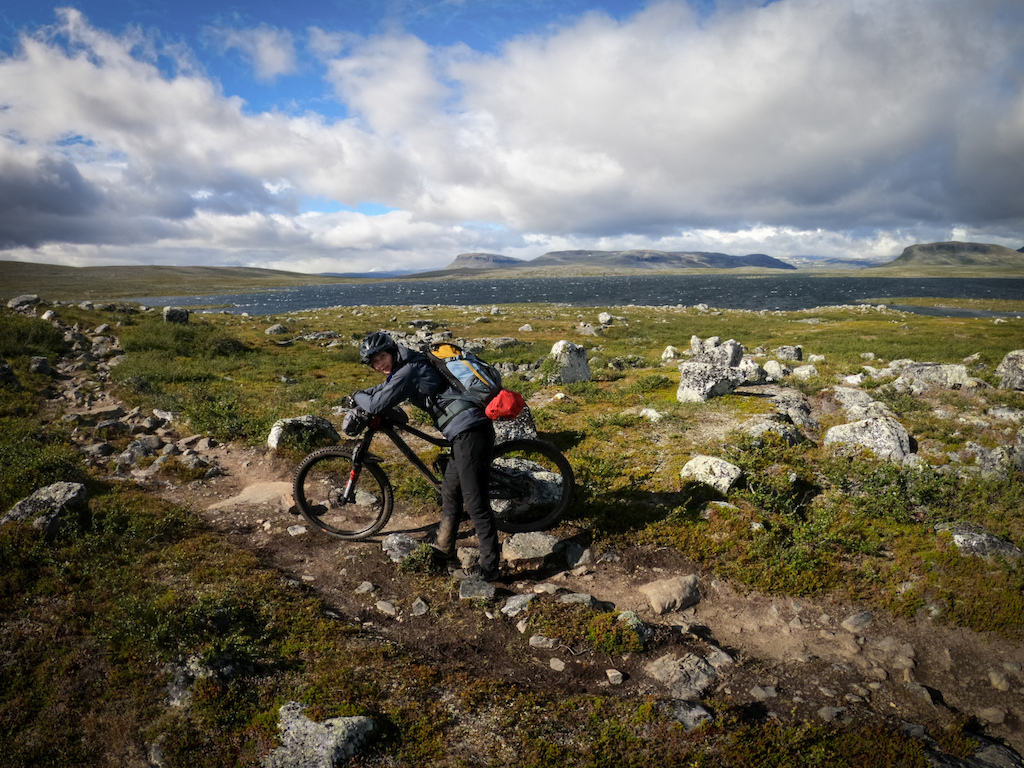 Energies running low! A relentless headwind battered us on the final push back to the start - which was almost insight, but on the other side of the lake. 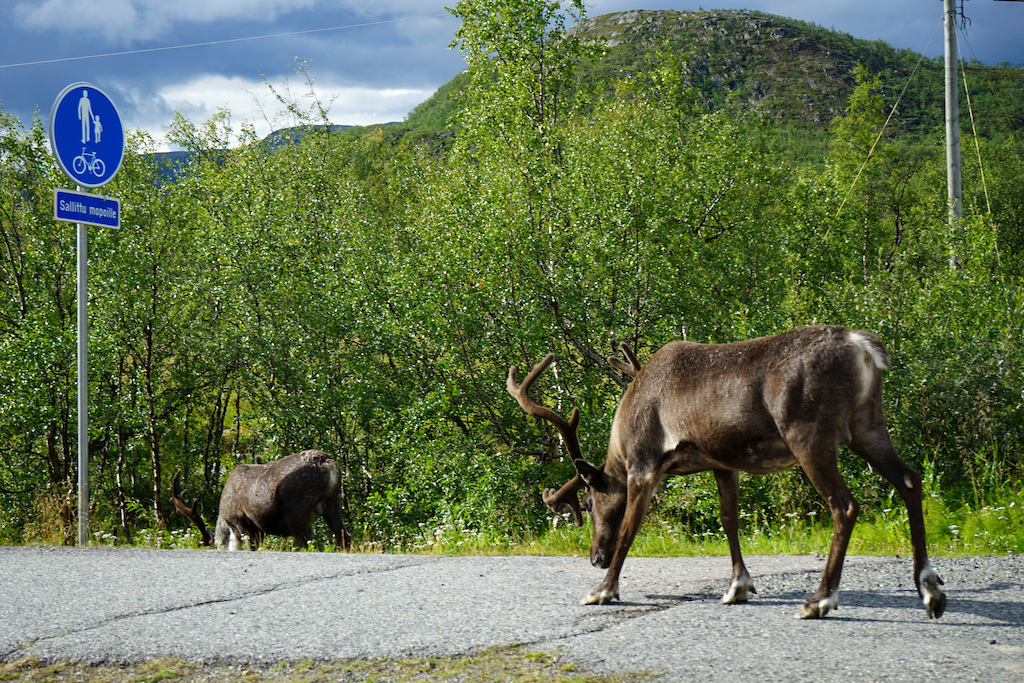 Back to relative civilisation, where reindeer make up a large portion of the population!
With thanks to Laurence CE for shaping our adventures and amateur footage into a fun story, and to Radon Bikes for the support to make it possible!

Offrhodes (Nov 12, 2020 at 9:43)
Finland is a bucket-list-item for me and this adventure makes it even more appealing. I would probably choose to hike (my wife's preferred outdoor activity) something like this, but glad to know the bike option is there as well.

kcy4130 (Nov 12, 2020 at 6:07)
Those endless, flat, rock gardens look like they could be pretty demoralizing! How does the cabin situation work? Is it first come first serve? Is it just so remote an area that it's not an issue? Do you need a permit to hike/bike in that area like you do for some very popular backpacking routes here in the usa?

lukeb (Nov 12, 2020 at 9:07)
To me as a European the idea of getting a permit to use the outdoors is absolutely insane. I'm lucky living in Scotland - if there's a trail you're allowed on it on bike, foot or horse, with a law that says in a lot of words "don't make a mess, don't be a dick". And, funnily enough, it works.

It mentions it in the article-

"In Finland the ‘Everyman’s Right’ allows every person the freedom to go where they like, responsibly, in nature – including by bike – with the exception of national parks where you’re encouraged to stick to the trail, and avoid protected areas. In national parks unlocked wilderness cabins are open to everyone who respects the rules to leave things the way you found them (or better!), and make multi-day excursions into the outdoors so much easier. "

kcy4130 (Nov 12, 2020 at 9:27)
@lukeb: It's very, very few places that require a permit for public land is the US. It's only in locations that were so popular and/or ecologically delicate that they were forced to limit the number of people per day. Otherwise they'd be completely overrun by hikers. For example Paria Canyon/Buckskin Gulch. It's a slot canyon on Utah/Arizona border that has very limited numbers of camp spots and floods if it rains. Hence a limited number of permits are given each day for overnight backpacking trips. but unlimited day trip ones. And yes, I am jealous of Scotland's right to roam laws (is that the correct term?).

Do you bring a tent in case the cabin is already occupied?

lukeb (Nov 12, 2020 at 9:32)
@kcy4130: Certainly in Scotland where we have bothies (the same principles, unlocked cabins around the wilderness and countryside for people to stay in) you have to have a plan b if the bothy you want is occupied. It's rare that you need to use it but if the bothy is too full to fit anyone else in you have to have other options, be it a tent with you or another bothy to head to.

KingOla (Nov 12, 2020 at 14:05)
@kcy4130: Some of the cabins are unlocked and some of them you need a key. The ones on the Norwegian side of the border, you can get a key for 10 euro, that will fit most of them.
First come first service. Or everyone that will fit inside if it is cold.

ManonCarpenter (Nov 16, 2020 at 9:45)
Yep, as @KingOla says generally half of the cabin is open to everyone, and half the cabin is locked/reserved. We reserved beds this time and got a key from the visitor center at the trailhead because we didn't carry tents with us, in the winter we chanced it and had a tent with us as back up.

And you can ride where you like in pretty much all of Finland. Some areas are restricted (Saana in the second photo is protected, for example), and you are encouraged to stick to the trail to avoid damage, but otherwise no permits needed. I guess it's less populated, which makes things easier. Can see why permits are needed in some places in the US!

anyexcusetoride (Nov 13, 2020 at 7:21)
I love this kind of video, much prefer it to the typical 'shredder' video. It is so nice to hear about someone's trip and come with them on it and also to follow someone 'going somewhere' rather than just riding a bike part or session a trail. I've seen on Manon's youtube channel there are more videos similar to this which I'll get watched!

I often plan in my head about making a video about some mountain top exploration trip I'm going on but then when it comes to the day/weekend of the ride I usually wuss out and get too nervous about talking into the camera, I just feel a bit daft. This one was great though, maybe I'll give it another go next time!

ManonCarpenter (Nov 16, 2020 at 9:48)
Thanks everyone for the kind comments! It's great to be able to share these trips, and I'm happy it's entertained, inspired or provided an escape to the outdoors in some way :-)

withdignityifnotalacrity (Nov 12, 2020 at 6:09)
Finland, my favorite country on earth. Thanks for the watch!