Video: Martha Gill On the Hunt for Adventure in Scotland

The stunning backdrop of Scotland is the landscape for the latest edit from the crew at DEITY, "Torridon"! Featuring Martha Gill on board the Skywire Carbon Handlebar and Copperhead 35/OS Stem, enjoy a slice of exploration as DEITY partners with Unieed Creative and taps into the essence of mountain biking. 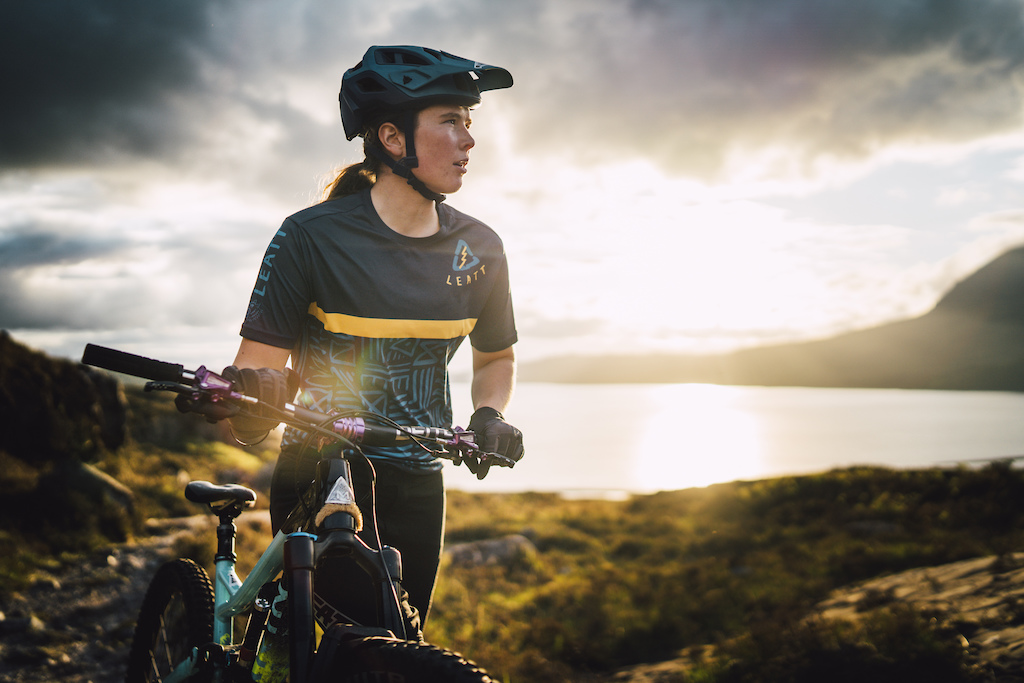 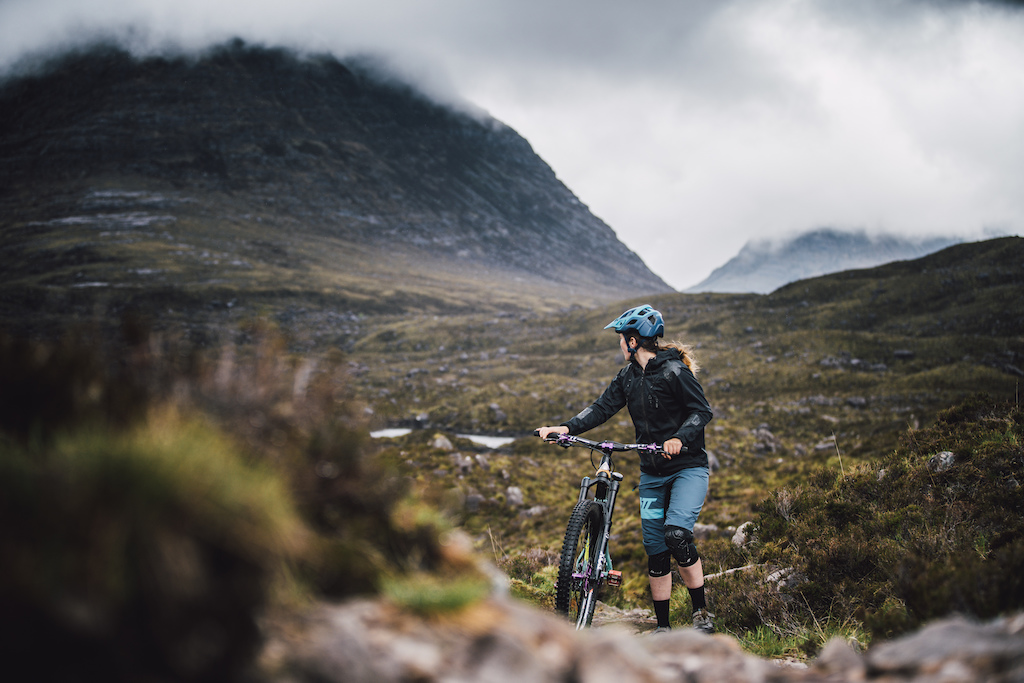 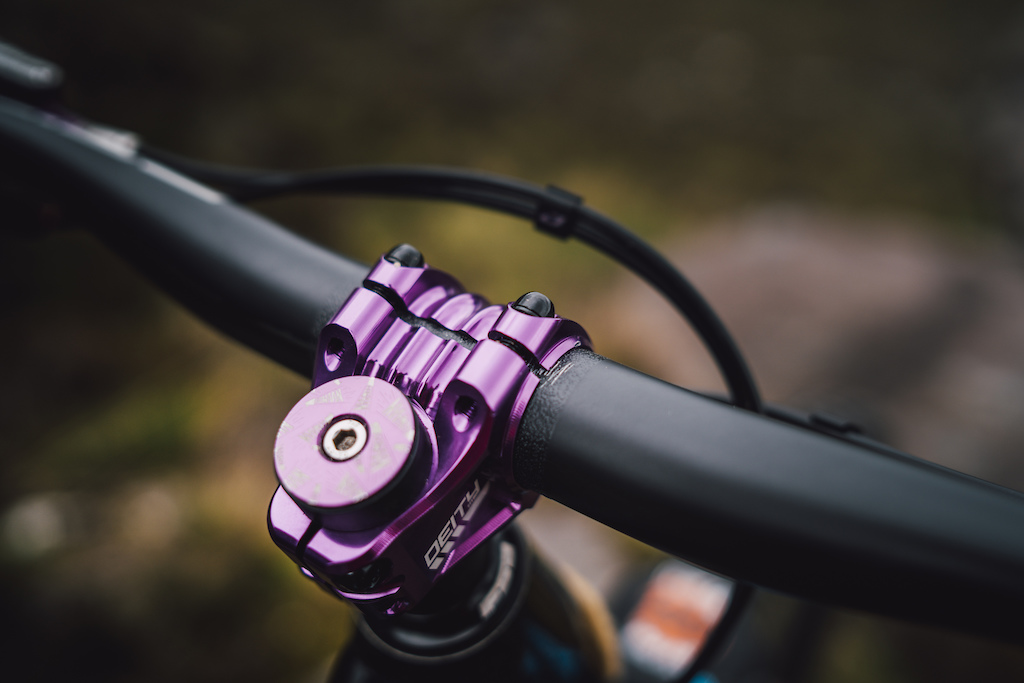 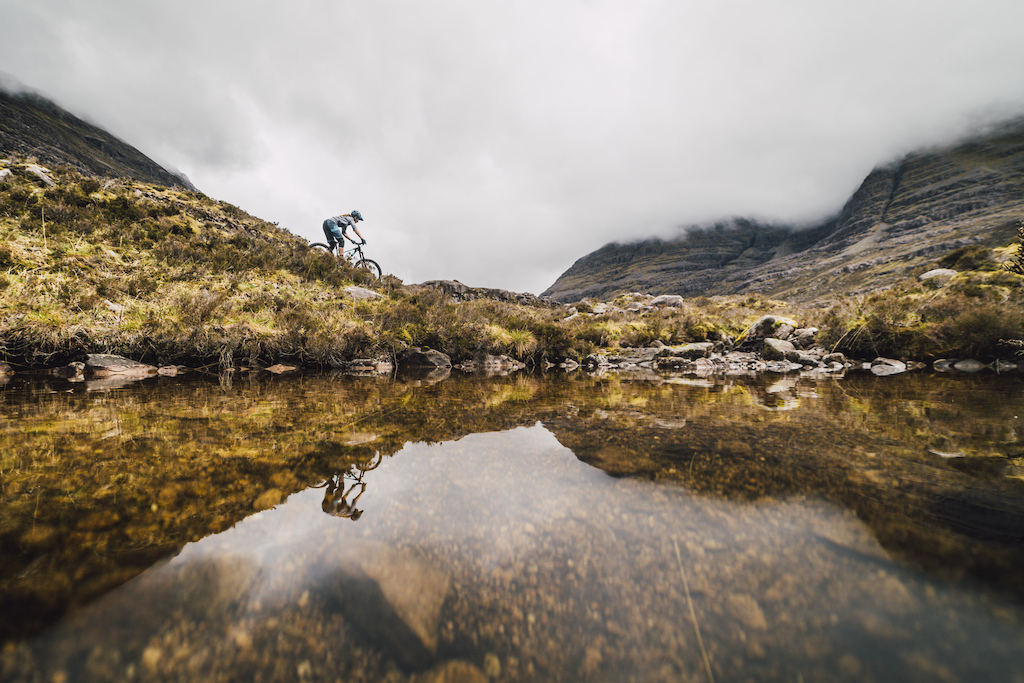 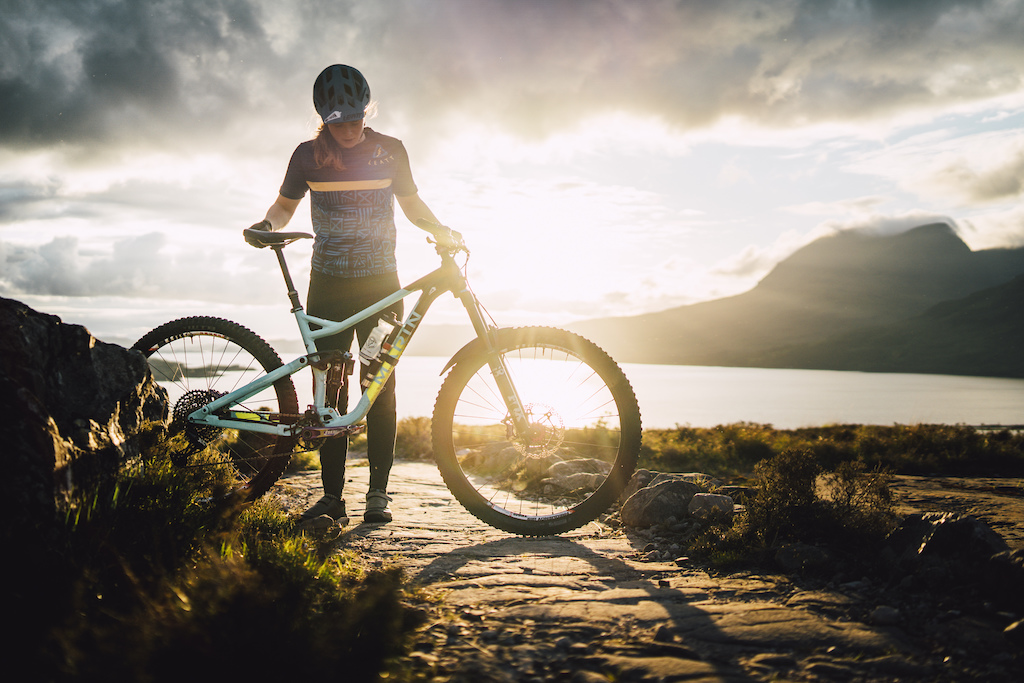 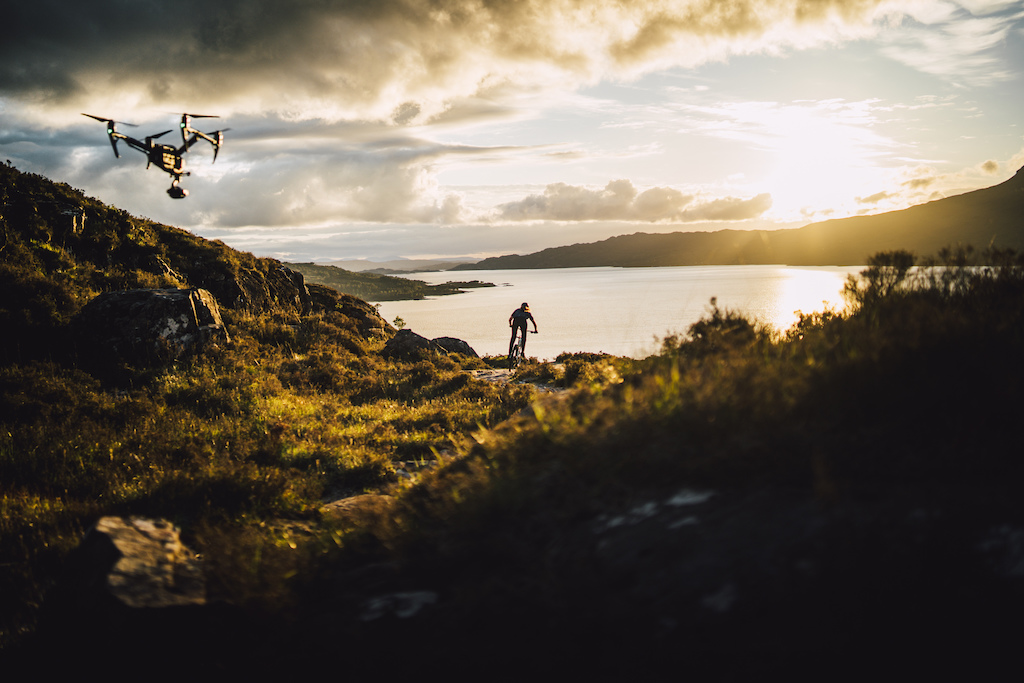 MrDiamondDave (Dec 14, 2019 at 18:42)
I still can't believe I have been there and ridden some of that same epic stuff!. Best week of my life riding across the Highlands

john303 (Dec 12, 2019 at 11:08)
Easily the best video if the year. Beautiful music; a sense of adventure; cinematography simply telling a story. Its 100 miles away from the generic, showie and boring biking videos with slow mo tail whips and loud indie-pop sound tracks.

RayDolor (Dec 13, 2019 at 18:40)
Understandable. Scottish girls who are beautiful, ride bikes, and are highly skilled musicians. I almost dropped everything, foolish old man that I am, to follow Hannah Barnes a year or so ago. I was hopelessly infatuated with her, let alone her riding skills, let alone her skills with a fiddle. A true Scottish Lass of legend.

I thought it was the British East India Company flag...

oneloosecrank (Dec 13, 2019 at 2:41)
I met this girl at the trail head of an Enduro stage. She was with her coach training for the race that weekend. I watched her do a pretty cool trackstand, take one hand off, then one foot, then the other hand, and hold it balanced with one foot on one pedal whilst seated. My jaw dropped. Never seen anyone do that before or since. I got a puncture later, her and the coach basically towed me back to the carpark. I shared a few drinks with her parents at the campsite and as I didn't have any beer to share, we invented a cocktail of Jack Daniels and Lucozade that we named 'Mosqituo'. Her folks cheered me on through my stage. I later ribbed her that I'd beaten her time on the DH track - she ribbed me that she'd beaten me on every other stage and I've been riding for as long as she is old. She's thoroughly awesome and comes from an awesome family.

Phipu (Dec 12, 2019 at 10:02)
Great video, great music... I'm just wonderign sometimes how it can be that some people are great bike riders or e.g. snowboarders like Pat Burgener, pretty damn good musicians aswell while people like me have a normal job, haven't found anything where they even would dare to think they are okish in and sometimes wonder whether there will at some point in time a moment where they find something where they can say: "yes, that's what i want to do, it fits my talents/what my strength are and is actually fun to do"

osteo (Dec 12, 2019 at 11:34)
About a gazillion years ago when I was a young and spry competed at the Provincial and just below the National level (not riding). The coach I had was fantastic (an English teacher) and he noticed over the years of coaching that all the best athletes he had were all artistic in some sense, music, drawing... but predominantly music, actual instruments. Maybe it is part the patience it takes... that was back before everything was electrified and boom-bastic.

Borealice1 (Dec 12, 2019 at 18:30)
@osteo: I guess I'll chime in here, and say that as someone who's played an instrument for almost 20 years, I can say that there's definitely something to what you're saying about patience. And not only patience, but I think the same way I can be critical of myself and keep doing takes in the studio for example, or play through scale exercises faster and faster, I can try and ride the same berm or section of trail with the same enthusiasm and intent just get better. Also, no on ever said you can't be an academically trained musician and not make electronic music... Just sayin'

James-at-Pedals Plus (Dec 13, 2019 at 1:05)
It would certainly explain why after 28 years of mountain biking I am still rubbish, tone deaf and rubbish at any instruments!

motdrawde (Dec 12, 2019 at 11:01)
Everything about this great! Music, riding, location, photography, videography. Brilliant

AKMTBER (Dec 12, 2019 at 9:13)
Quite simply, Martha is one of a kind. Amazing riding skills, awesome sense of humor, and a genuinely awesome person.

hotdogwog (Dec 12, 2019 at 9:51)
Having recently visited Scotland and being privileged enough to get some riding in, this made my day!! And yes, love the piano!!!

ridebikesyall (Dec 12, 2019 at 10:11)
Martha is such an awesome rider to watch. I love that she got to incorporate her love of playing piano into this edit as well!

LONDON (AP) — An exit poll in Britain’s election projected Thursday that Prime Minister Boris Johnson’s Conservative Party likely will win a majority of seats in Parliament, an outcome that would allow Johnson to fulfill his plan to take the U.K. out of the European Union next month.

Dropthedebt (Dec 12, 2019 at 16:02)
@endlessblockades:
I voted leave in the referendum but in the intervening years my mind has changed. Why? Well basically due to the people running Brexit. These are in the majority self-serving, upper class and untrustworthy people. It has been shown over and again that blatant lies have been used and the billionaire press has been mobilised in scandalous dirty tricks campaigning. It has been found by independent fact checkers that 88% of Conservative Facebook ads alone contained inaccurate or false information.
In my humble opinion this should not have been a General Election but a 2nd referendum on the choice of the Conservative negotiated deal or remain.
It has been a very tactical campaign, well masterminded for sure by the Conservative Party but I will say the way the E.R.G. and the hard-right Conservatives have played the British people over the last 5 years will come back to hurt us all as a nation.
We are a fantastic country that has been degraded by these same self-serving individuals across the political spectrum.
It's midnight here now and I'm off for a night ride.

ywos (Dec 13, 2019 at 4:25)
Great video! Torridon is such a beautiful place. I had the pleasure of hiking/climbing there in early spring two years back, and it was awesome. Applecross, Torridon, Assynt... Everywhere you go in northwest Scotland is simply amazing, I must take my bike one day...

BikesBoatsNJeeps (Dec 13, 2019 at 4:25)
Glad I viewed that, it was reallg well done. I really enjoy following the Gowaan Girls, Specifically Martha and Katy Winton, all though the lot of them look like they're skilled, super competitive, and great for the sport in general. Bex Barona is the kind of girl I hope my daughter turns into she is a shredder and looks tough as hell.
The EWS women in general seem to share so much more camaraderie the WCDH women. Even though they're fiercely competitive it seems like they all get along off the bike as well. I love how Vali Höll even brought up that it was a bit standoffish in the DH pits.
Gowaan Girl!

ejl1 (Dec 13, 2019 at 6:13)
I never post - but that's worth posting for. The location and riding alone makes it great but the music takes it to another level. I watched the credits twice just to double check before posting but Martha composed it and played it. WOW - reminds me of some of Aphex Twin's piano work and that is saying something - serious skills

PopoMack (Dec 12, 2019 at 18:25)
Leaves me with the feeling of my last epic ride with friends in a new place. Amazing work, captures everying I love about our sport!

teethandnails (Dec 12, 2019 at 18:26)
That's amazing! Hands down the best edit I have seen this year. Awesome music produced by the rider? AMAZING.

MarkJAmos (Dec 13, 2019 at 2:01)
Loved it. great riding, scenery, music and filming and we got see some mauals/wheelies with Martha is rather good at!! :-) On a depressing day for the UK this has brightened my mood.

aljoburr (Dec 12, 2019 at 22:03)
Must be nice to make your own soundtrack, my videos would be way better, Torridon is a place I would like to explore more! Would be adventure round every corner at this time of year!

Zarma (Dec 12, 2019 at 22:53)
Fifty shades of grey in this sky, but what a magnificient landscape! Scotland or the simple strength of Earth. Nice production, nice music, nice riding and nice rider: great job!

LuvDemHills (Dec 13, 2019 at 4:33)
Simply mesmerizing to watch and listen to! Having ridden these trails I appreciate how special and beautiful that part of the country is and what an amazing edit to showcase Marthas skills, well done.

ollieF (Dec 13, 2019 at 4:36)
This gave me goosebumps. Stunning cinematography and brilliant editing accompanied by excellent music and riding. (In case you didn't realise, i liked it a lot)

Jabbawasmadadda (Dec 14, 2019 at 2:18)
^ Exactly this, my goosebumps had goosebumps, damn we're lucky to be Scottish and call this place home

JimmyOto (Dec 13, 2019 at 11:01)
I think that's the only video this year that I've watched all the way through more than once! There's something about this that really captures the essence of the place and the riding. Love it!

mdscherrer (Dec 13, 2019 at 16:43)
BEAUTIFUL!! CAPTIVATING! Watched it three times already. The music, the riding the scenery, all of it is top notch! I wish there were more MTB videos like this.

savagelake (Dec 12, 2019 at 15:58)
badass. that peaceful ridgeline/rainbow shot that changes over to a chaotic pov was my fav part.

fatduke (Dec 14, 2019 at 12:19)
@mtb-scotland: close I'm Yorkshire we tend not to acknowledge the vast majority of England.
Post a Comment