2020 World Cup Downhill overall champion, Madison Saracen’s Matt Walker, has a target on his back for 2021. The young British rider is relishing the pressure however and after a summer training camp in South Africa is ready to chase his first World Cup race victory this year.

Since his victory in the Junior category at the UCI Mountain Bike World Championships in 2017 Matt Walker has been a downhiller flagged as a star for the future. A difficult second season at the Elite level in 2019 had him starting 2020 slightly low on confidence. When Covid-19 turned the bike racing schedule on its head the Madison Saracen rider was one of the quickest to adapt. Following the season opener, the World Championships in Austria, Walker went on to win the compressed World Cup Overall title. 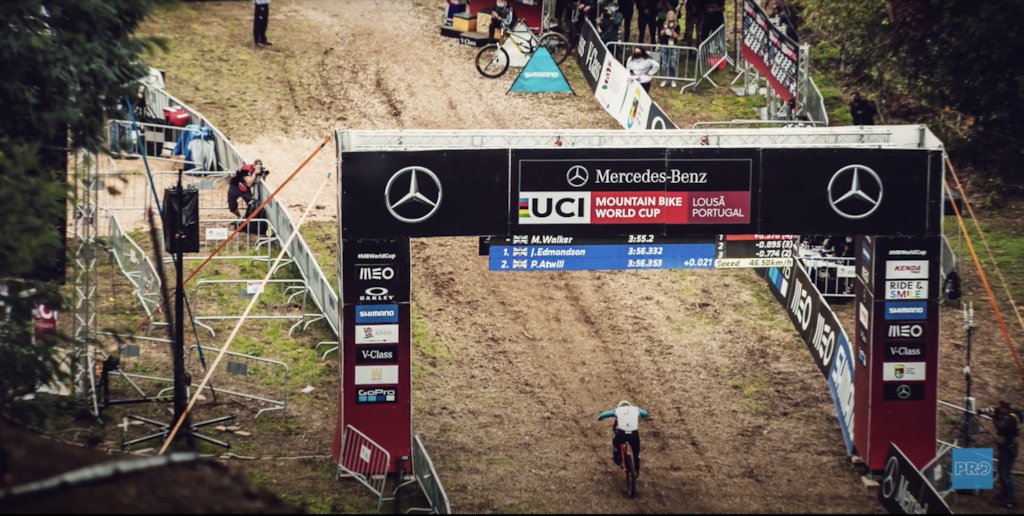 He did so by holding off some of his sport’s most established stars. As a result, he starts 2021 with a target on his back. There are however many goals left for him to chase. Both Walker and his coach, Phil Dixon have highlighted a couple of key things for the reigning champion to set his sights on.

Stepping into the Elite category was a strange moment for Walker the 21-year-odl allowed: “When I first got interested in downhill it happened to be the season when Greg [Minnaar] and Gee [Atherton] were battling it out for the overall title. They were, as a result, my idols as a kid. Then three years ago, when I stepped up into the Elites, I had to make a mental shift. It’s not like I respect them any less. But I had to acknowledge that my idols are now my rivals.” 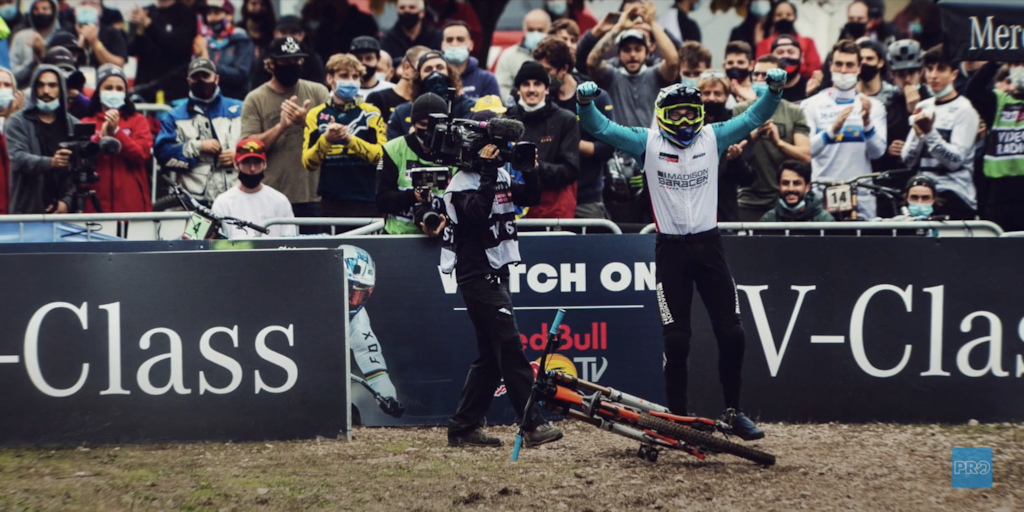 Walker’s grounded personality and steady approach to making incremental gains has seen him improve year-on-year. Or so says Dixon. “I’ve been working with Matt since he was 15” Dixon related. “When he first joined the Madison Saracen set-up as a Junior Will Longden asked me to work with him. In the early days we steered Matt towards having fun and developing his skills. It was only when he reached the Elite category that we introduced a more structured training plan. I believe that if you top out as a Junior it can be really difficult to close the big gap to the world class riders.”

“Three years of steady progression on and Matt is where he needs to be” Dixon stated. 2021 will no doubt be a big year. “In a way it was a blessing in disguise that Matt didn’t win a World Cup in 2020” Dixon reflected. “It gives him a big target to aim for in 2021 and a massive source of motivation.” 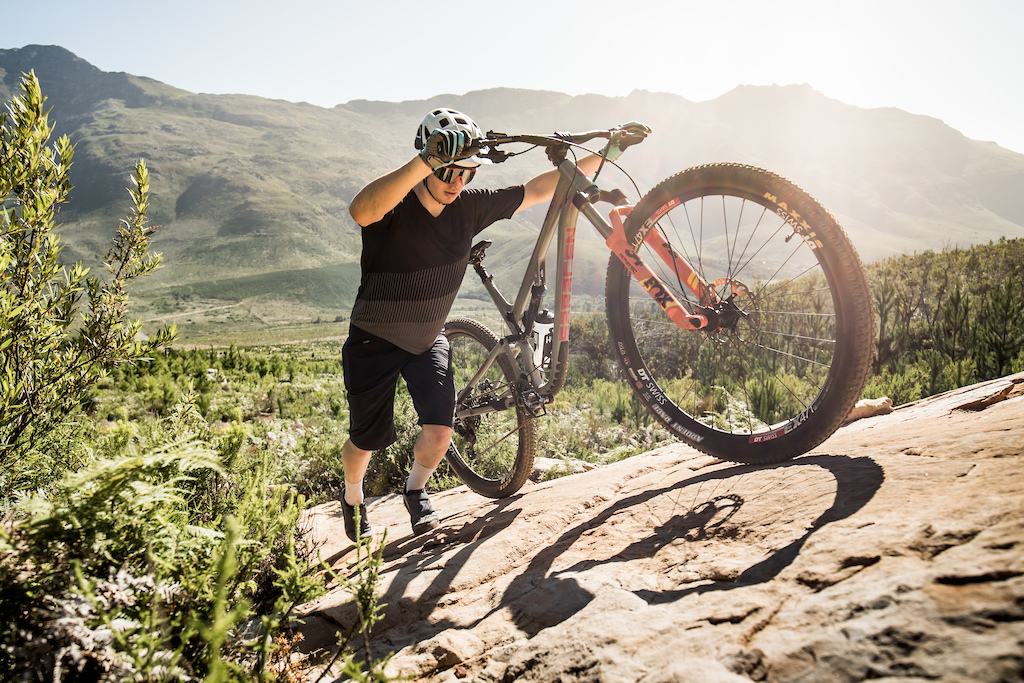 To kick off his preparation for 2021 in the best possible way Walker travelled to South Africa in January. While his home country, the United Kingdom, was enduring a snowy winter he was soaking up the sunshine in Stellenbosch. “It’s easy to see, sitting here in the sun, why I wanted to come to Stellenbosch to do my winter training” Walker laughed. “It’s been great to be able to escape the winter, ride an amazing trail network and train in the sun.”

Dixon ensured that Walker did not just get to enjoy trail rides and suntanning next to the pool however. Strength, flexibility and explosive power training programmes were worked into the fun activities. A year on from their last training camp in Stellenbosch the coach was impressed with Walker’s progress. “Last year you were kind of rag-dolling towards the end of your sprint efforts” Dixon recalled. “This year you’re driving power through the pedals right to the top.” “I feel more efficient” Walker confessed, in return. 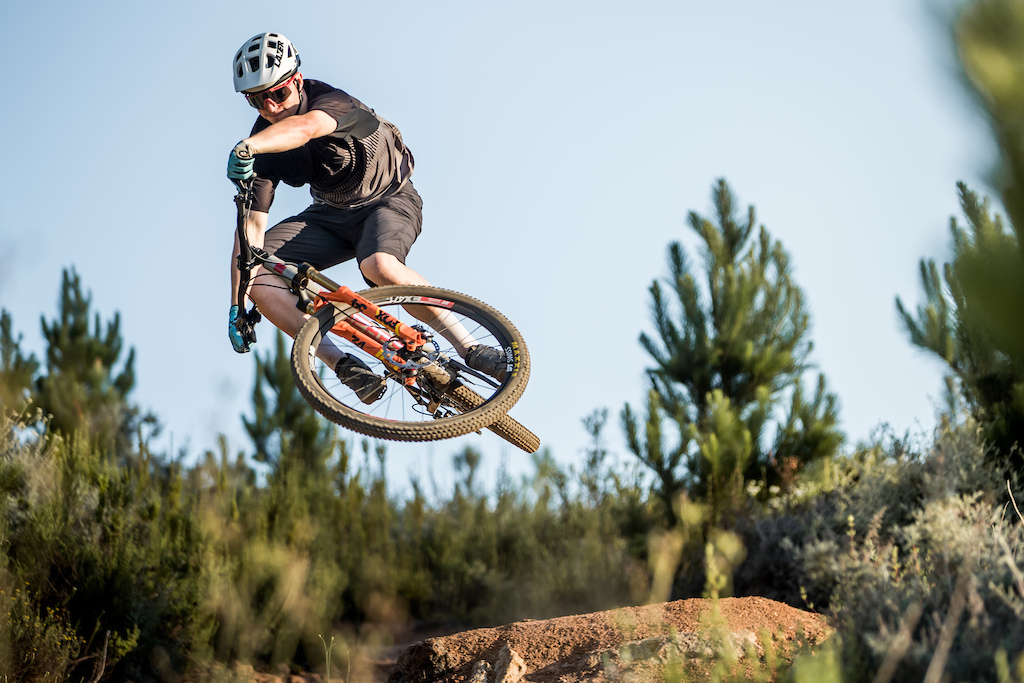 Ominous signs then for his downhill rivals. Especially as both he and Dixon are working with a plan to ensure that he’s not only physically prepared but also mentally ready for the season ahead. “I believe it’s really important to enjoy riding your bike” Walker said. “Of course, it’s hard at times; especially when it’s raining or snowing and you have to go out on the road bike. But being able to get on a downhill bike on the weekend and go racing makes it worthwhile. I love what I do!”

To keep things fun and to ensure Walker is motivated and relaxed heading into the races Dixon has one particular ace up his sleeve. “Lots of the downhill guys ride motocross bikes” he smiled. “But Matt loves his track bike. So, the plan is to keep him fresh and having fun by allowing him to ride his motorbike this year. Track days not only sharpen his reflexes but make him happy. And that will help keep him hungry and motivated for the World Cups. Right now, he’s really hungry for that first World Cup win!” 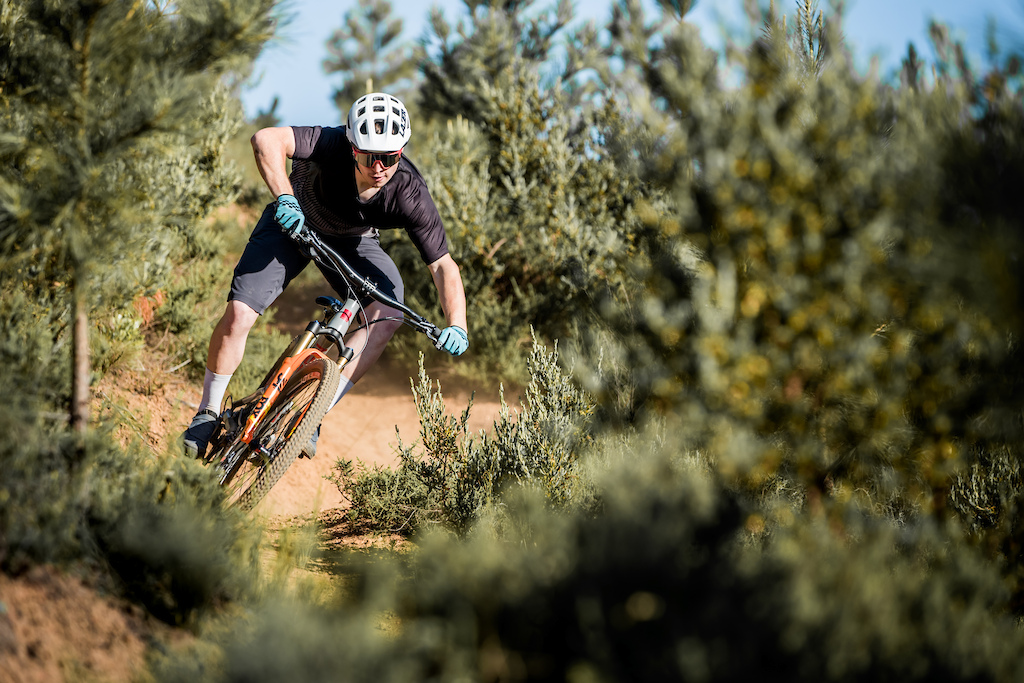 Maintaining motivation throughout a challenging season could once again be key to succeeding this year. With Europe in the midst of a Covid-19 second wave and with additional waves predicted there is not certainty that the World Cup season will progress as currently scheduled. The flexibility Walker showed in dealing with four races compressed into a very tight window in 2020 could well stand him in as much good stead as his winter training programme.

As could another year of familiarity with his bike and components. To ensure a similar feel Walker uses the PRO Tharsis 35 handlebar and PRO Stealth Offroad saddle on both his downhill and trail bikes. “PRO have done really well to find the balance between stiffness and feedback providing flex on the Tharsis 35 handlebars” he praised. “They are stiff enough to conquer rough terrain but have enough flex to provide the right amount of trail feedback. If a bar is too stiff you lose all feedback and that affects the ride quality." "The PRO Stealth Offroad saddle just fits me really well” Walker added. “I’ve tried a few other saddles before and none have worked as well for me. I use it on all my bikes and find it really comfortable, even on long training rides. Even on a camp, like the Stellenbosch one, when I was riding every day it remained comfortable; which is really important” 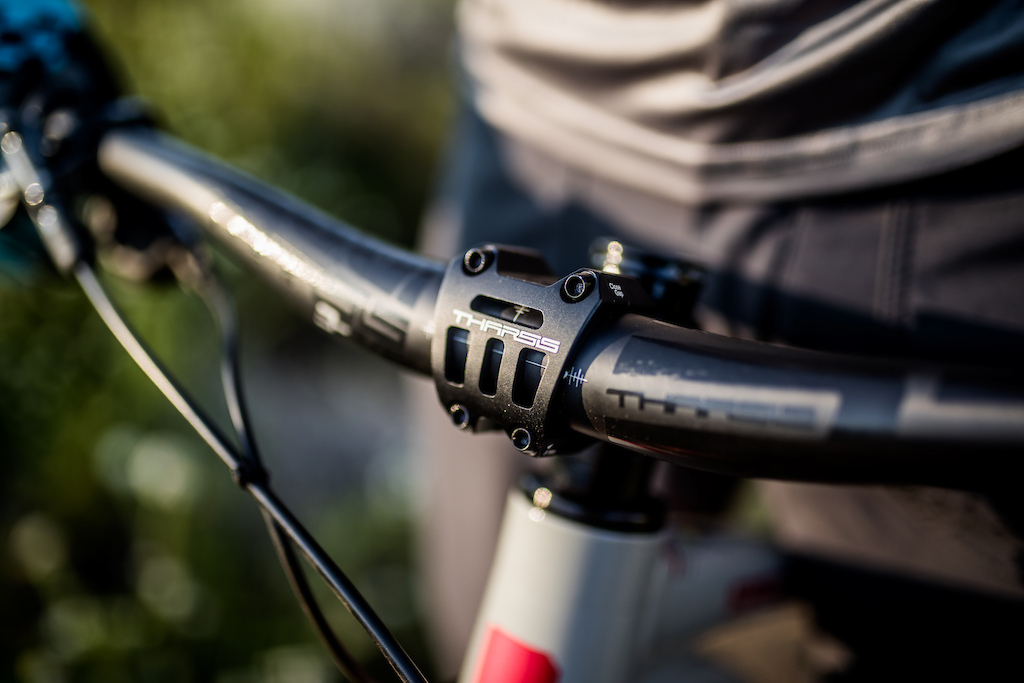 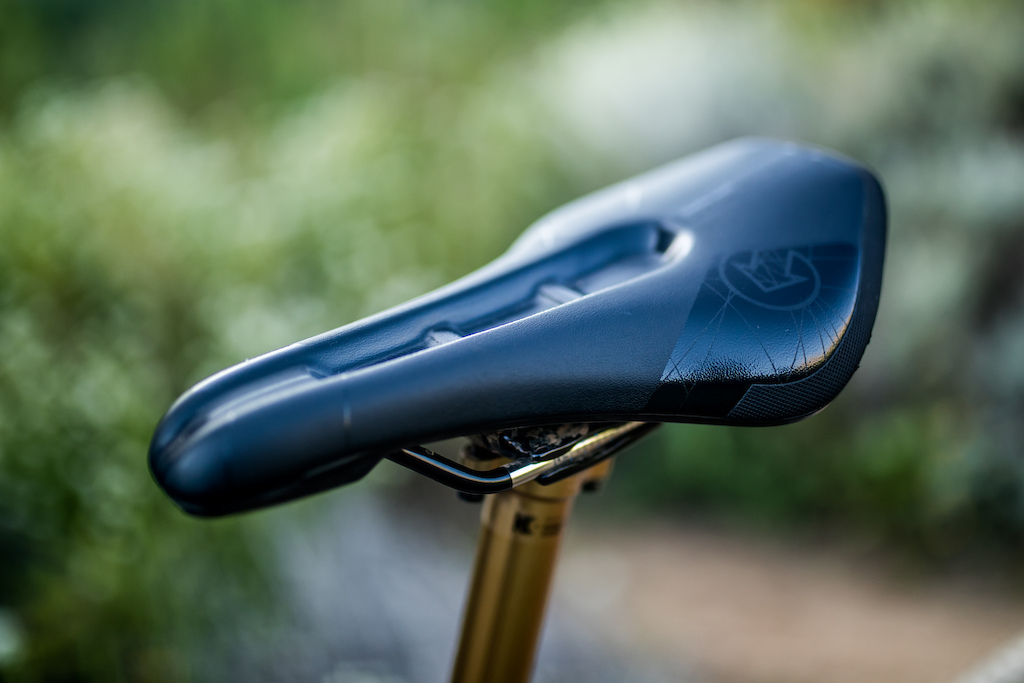 With his equipment and preparation dialled in, along with a plan for staying motivated throughout what could be a complex year, the Madison Saracen rider approaches 2021 with all the parts in place for another stellar season. A year that could well bring his maiden World Cup victory. No wonder there is a target on his back, though Walker carries that extra pressure with ease.

shift-media-co (Feb 9, 2021 at 7:44)
An absolute privilege to have produced this doccy with Matt & Dixie. Great guys all round, hard working, focused and a deserved winning combination for sure. The future is bright indeed.

Spark24 (Feb 9, 2021 at 5:00)
It takes a certain kind of badass to have confidence to slay those rocks at Jonkershoek without kneeguards. In Matt Walker, we have just that.

Raymondsoares (Feb 9, 2021 at 8:30)
Only moved away from Cape Town to England two and a half months ago, and already miss it more than Bambi misses his mother! Special place in the world right there!

PS: Its not all that great, dusty and hot at the moment, wait till summer finally arrives and you'll have some uplift options which we don't have much to choose from.

yambaman (Feb 9, 2021 at 8:19)
His sock choice in that final scene discredits all his achievements.

MrNally (Feb 10, 2021 at 1:20)
I think it safe to say that judging by the number of comments in here, wining a four round overall without actually winning a race isn't something that gets fans very excited. Oh well. Hoping for a long 2021 season
Below threshold threads are hidden

MikeyMT (Feb 9, 2021 at 8:22)
It's such an interesting case study of what PB Podcast has been talking about with this kid in particular. Pretty much zero social visibility, virtually no video parts or edits, but he won the overall...Yet does anyone really remember that? All I can remember is Greg and Loic winning this year.

MikeyMT (Feb 9, 2021 at 11:28) (Below Threshold)
lol. Haters gonna hate...but even the lack of comments on this article prove my point.
Post a Comment