These days, it seems, if the stats aren’t impressive then it isn’t worth talking about. The circles we live in and around will often ask how far, how hard, how high, how long; but what about how fun? So earlier this winter, to break free from solstice goals that are reached only by physical and mental punishment, we decided that on the shortest day, we deserved some simple fun. At first, waking up at 5am may have felt like a type of punishment but only for a self pitying and dramatic split second. It’s really not that early...

Across the street from our house lies Diamondhead; an area of Garibaldi Provincial Park, which sprawls around the mountains of Squamish. Iconic Squamish trails like Half Nelson and 19th Hole are all ‘up Diamondhead.’ Just past the entrance to 19th Hole, a 15min drive up a FSR, is the entrance to Red Heather, a popular ski touring spot. Red Heather has a bit of a bad rap amongst the hardcores. There’s almost no avalanche concerns due to the limited and low angle terrain so it attracts a lot of beginners and out of towners looking to learn. The approach is long so it’s a lot of up, for not a lot of down. It is, however, across the street from our house and we’re not too cool for Red Heather. Our goal was to catch the sunrise from the top, which we missed, but the day was clear and the views INSANE. 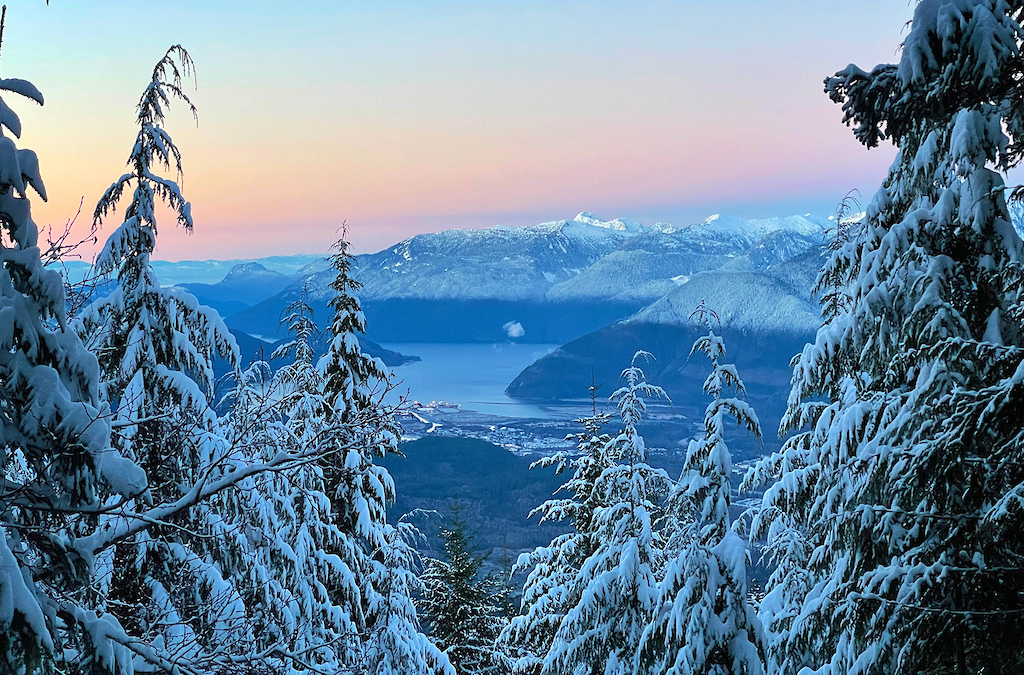 In the past, traveling so much for racing, it wouldn’t be uncommon for us to almost miss entire seasons at home. Often, summer would just be getting started when we’d leave for Europe and we’d arrive home to already cooler temperatures and shorter days. In the Winter, scared of the days where the sun never comes up and it rains 100mm+ we’d run away to the drier and friendlier climates of California and Arizona. COVID has forced us to break routine and stay put. We’re no longer able to get up and go whenever we want, wherever we want, a privilege we’ve lived with for so long. It’s highlighted how special our home is and the people we're surrounded by.


The day may have been short, but even after an entire morning of skiing there was still ample time to ride our bikes. It’s crazy to think that mid-December was actually the snowiest and coldest day we’d had on our bikes thus far! Riding straight from our door to the trails, puts us back on Diamondhead and only a couple hundred meters below where we were skiing earlier. A few fun and slippery laps later we were sitting on our bikes watching the sunset from the top of Hybrid.

We’re not sure the total distance, the elevation climbed or the calories burnt for the day but we remember Jesse’s backflip, Remi blowing up a snowy turn on his bike, the laughs we had, the mysteries and international problems we solved, the endless views and the feeling of reassurance that we were doing exactly what we should be, exactly where we should be.

Also, not trying to be annoying, but just a friendly reminder that in this era of increasingly clever and brazen bike-thieves, we need to be mindful of how much info we're giving out online regarding where we live. From the line "Across the street from our house lies Diamondhead" and the neighborhood shot (around the 06:55 mark of the video), I was able to pinpoint your exact street, in less than a minute on google maps. And I'm not even familiar with Squamish, just a random dude from the internet who likes to explore around with maps. I'd hate to hear about your garage getting raided! Cheers

artistformlyknowasdan (Apr 13, 2021 at 15:33)
This was fantastic! Being able to bike and ski in the same day is a large part of why I decided to move to where I am. Couldn't imagine life without it now!

rjcaswell (Apr 13, 2021 at 22:53)
3 of the most likeable and charismatic athletes in sports. Awesome video living the dream in a beautiful part of our wold.

Molesdigmyjumps (Apr 14, 2021 at 0:31)
If you have the whole day why not start without driving for a change

mammal (Apr 14, 2021 at 8:10)
Because it's literally the shortest day of the year, and you can't ski through most of the town of Squamish? I'm sure there are more reasons I could list.