Video: More Prototype Failures in Another Episode of 'We Develop a Bike Frame'


All those who have followed our project "We develop a bike frame" from the very beginning have surely noticed that it has become quite quiet in the last months. The reason for this was another bad result in the test laboratory at EFBE. We've kept you up to date on YouTube with video content. But paused the articles here for a while to work out solutions from the new findings and to know more about where we stand before we face the public. Most of you will know that bad results are part of the game but a few might just believe that we do not know what we are doing.

Let us start with the first video in which we explain to you what we have changed between the V2 and V3 in order to achieve the Gravity/Category 5 test at EFBE. 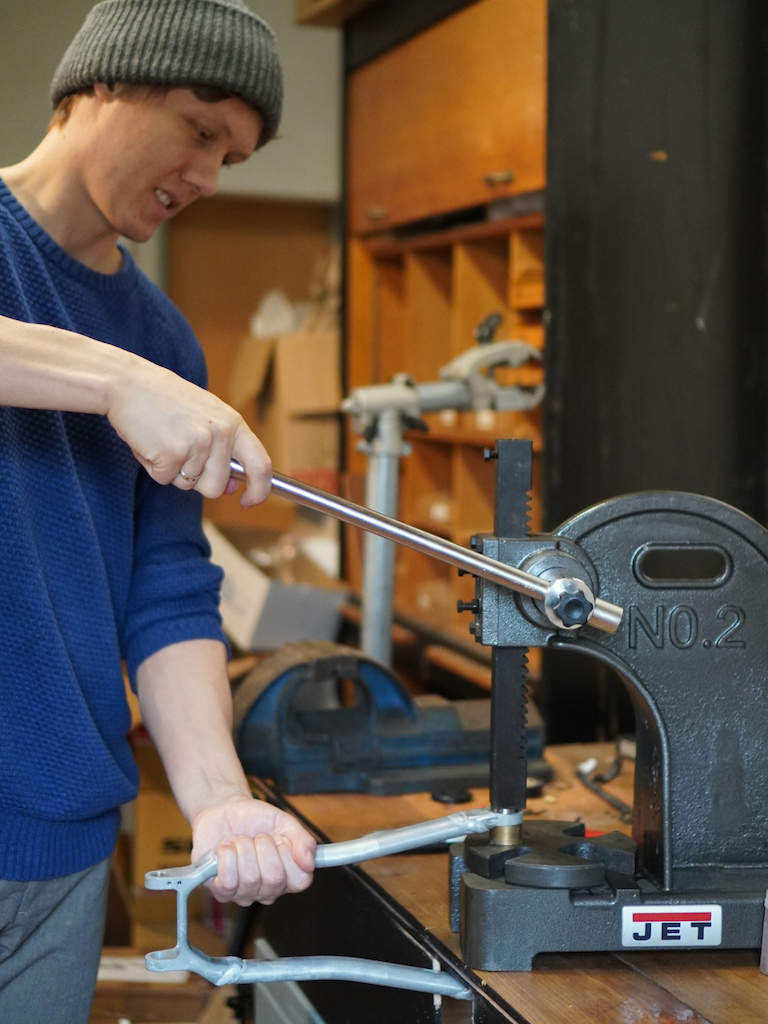 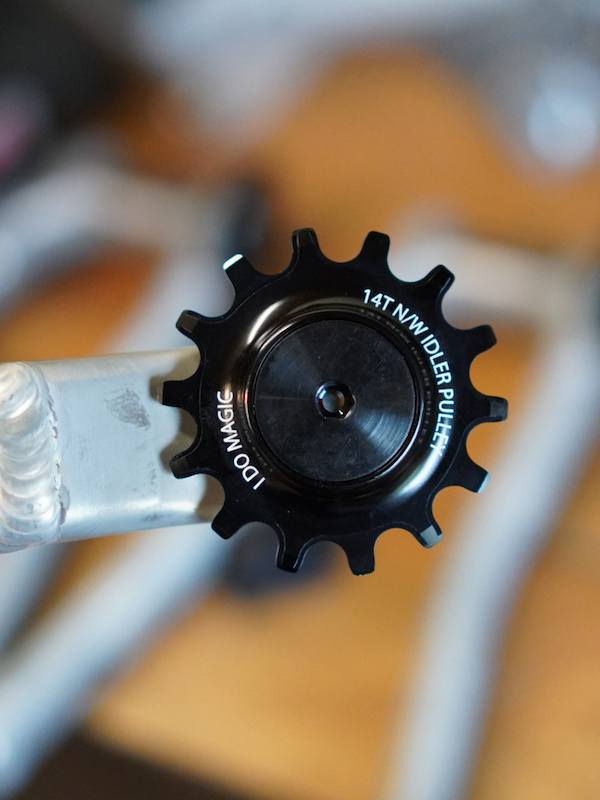 The changes to the yoke which had shown a fatigue fracture during the first test bench attempt. All test bikes will now be converted to the new chainstays which also includes the kinematics update. 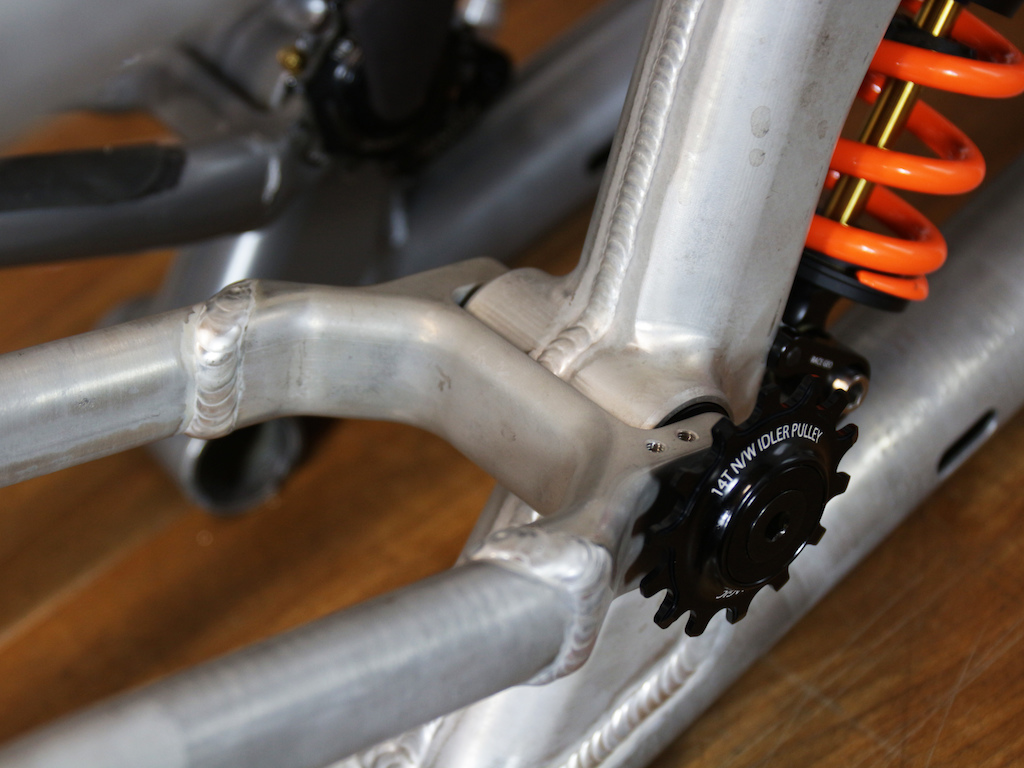 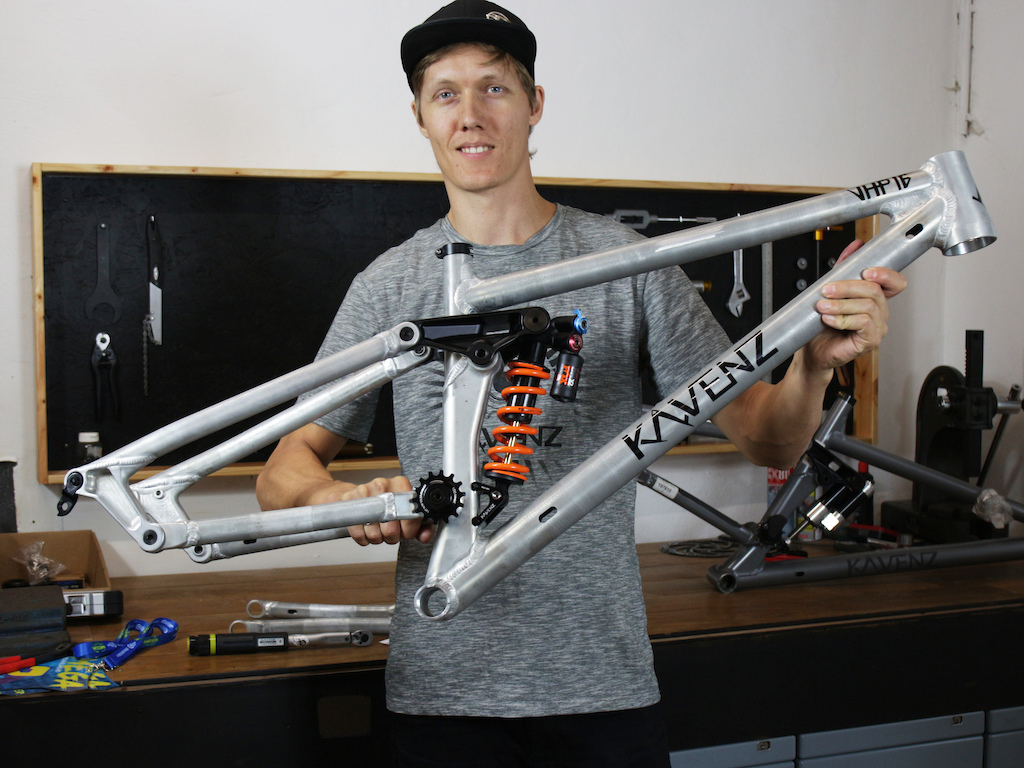 This is the second video we filmed at EFBE last November. Unfortunately, we encountered some very unexpected problems, namely a crack in the Headtube area after only 15.000 cycles. This seemed very strange to us because this should have occurred in the field test after one year at the latest. But in the field, we still have zero problems at this point, even with the first samples from 2 years ago. But the good news is that the changes in the chainstays have led to a good result. 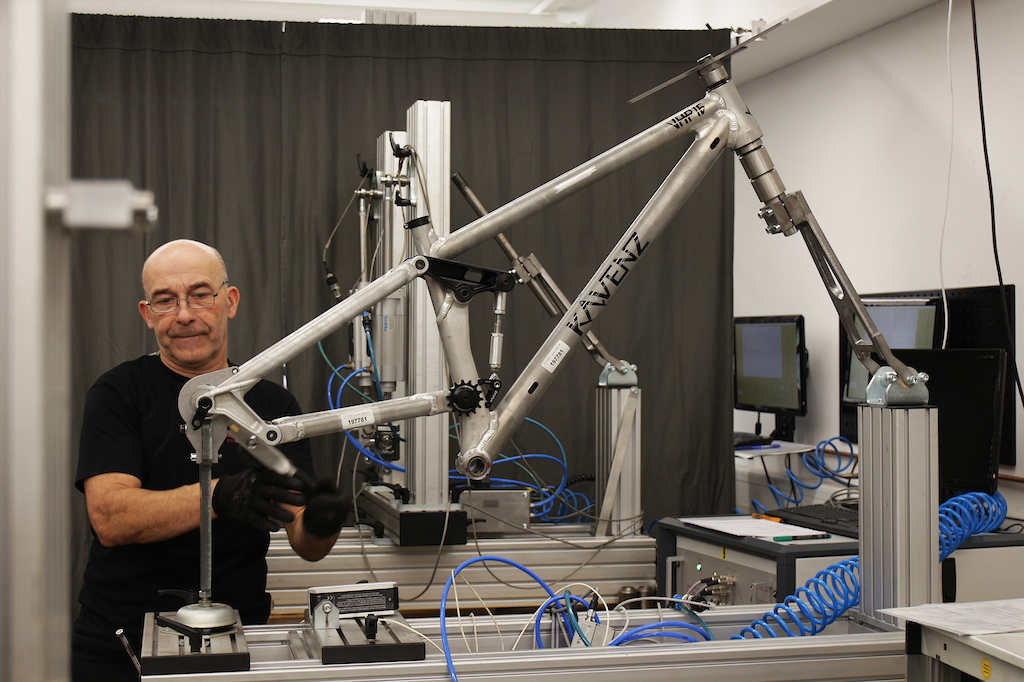 Siggi from EFBE set up the frame for testing vertical forces. Here, a seated ride on an uneven path is simulated. 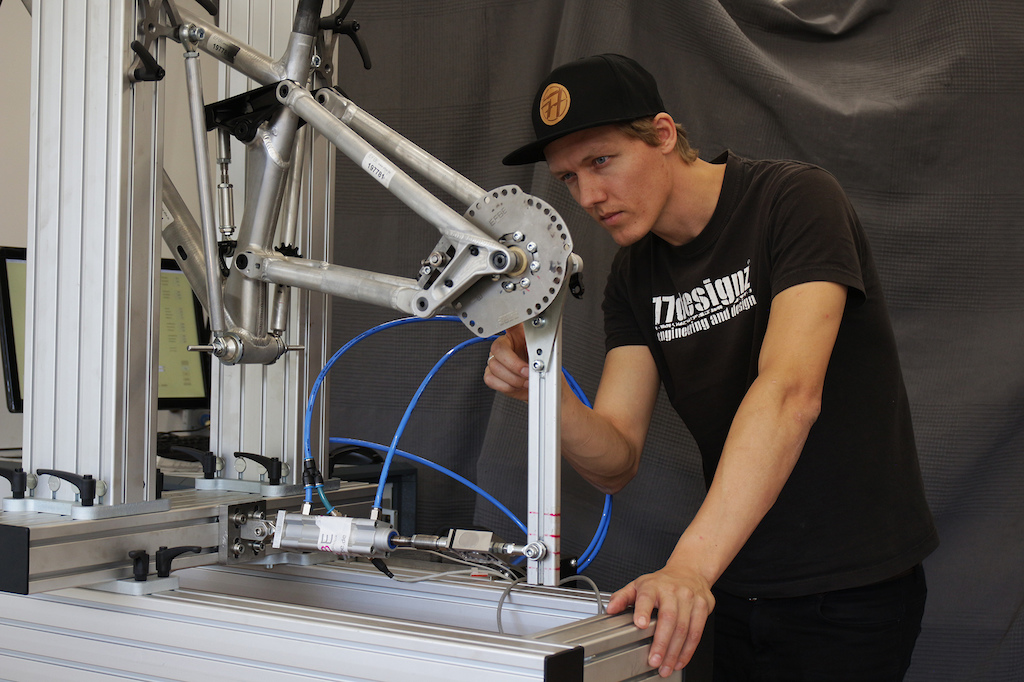 Giacomo observes how the area around the welding seam behaves under load - being able to observe such tests with your own eyes is particularly valuable for a developer.

In the third video, we explain what consequences we draw from the lab test, how we will proceed and what changes will be made to the frame. 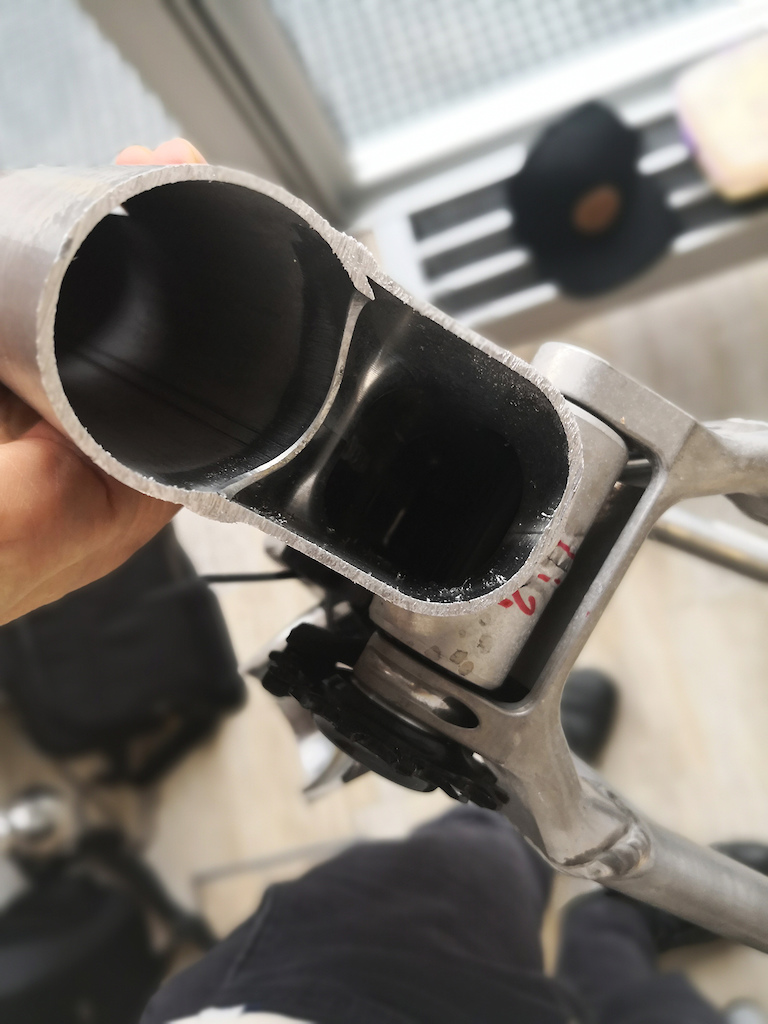 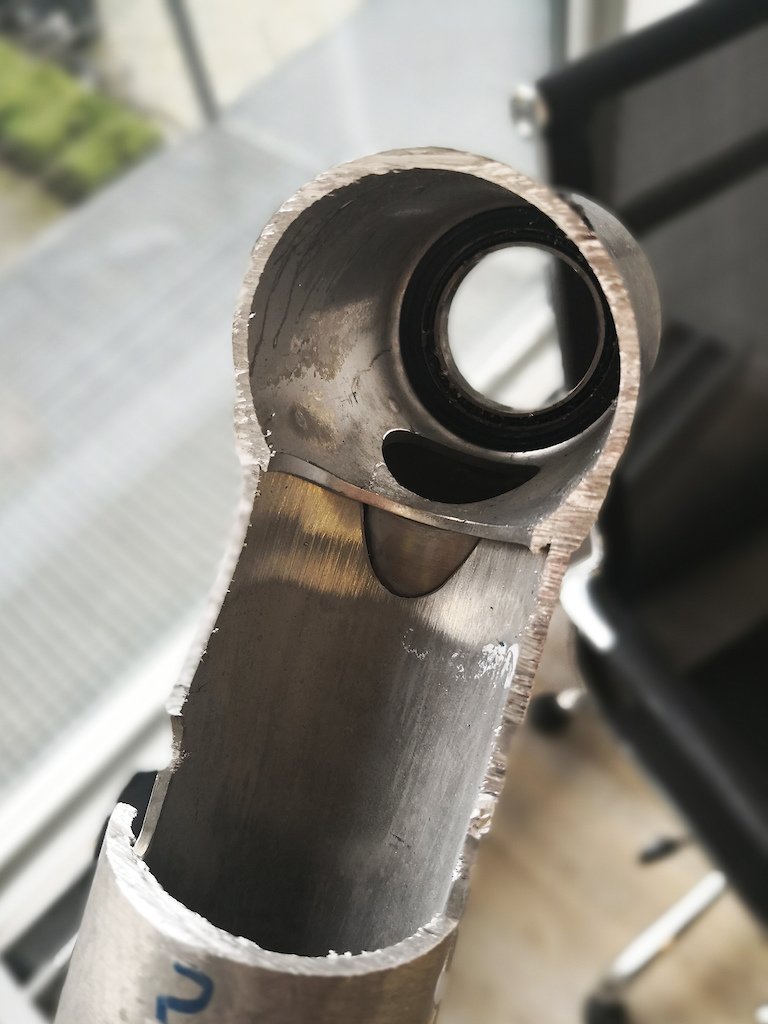 The samples were taken for hardness testing allow an insight into the inside of the frame. Unfortunately, the hardness test itself did not give us any clarity - maybe we had simply spent too much time and the material itself has hardened further.

With the help of @OnkelBob, from MTB-News, we have simulated the area around the head tube extensively. First of all, we made an actual comparison on the basis of which we found out that the new gusset had no influence on the new crack. Here in the picture, you can see the comparison between with and without the new gusset. 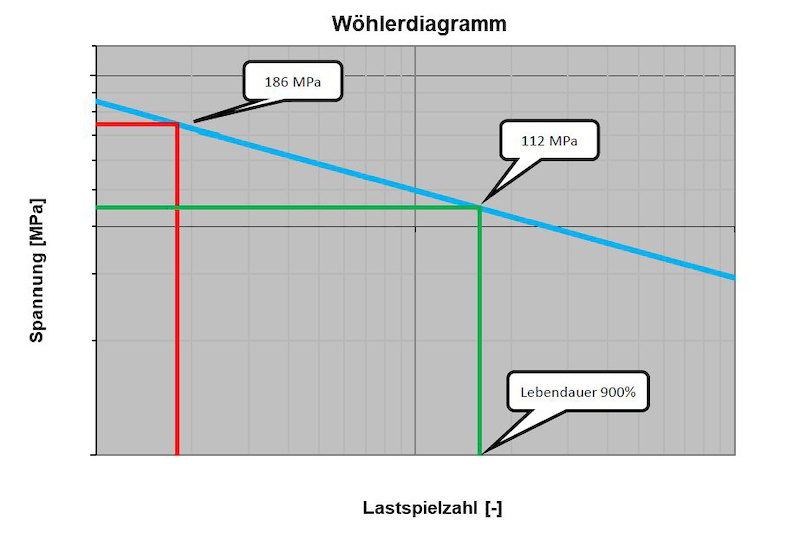 According to FEM, this gusset can increase fatigue strength by 900%. Considering that we neither had no problems with the first frame on the rig nor in the field, we should be in a very good position here. 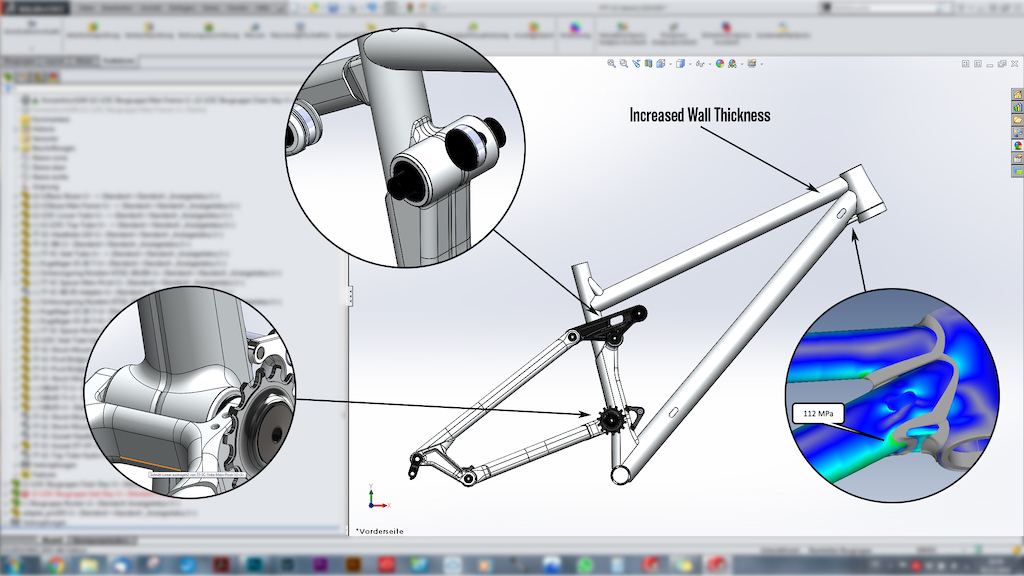 Here again all changes of the Kavenz VHP16 frame on the way to the V4 at a glance. 25 frames of this evolutionary stage are currently in production. They are planned for our Extended Field Test Program, some industry contacts, the test bench at EFBE but also to build demo bikes for magazines. If everything works out at EFBE we will start with full throttle into the series production. If you don't want to miss out, subscribe to our newsletter, find the current geometry options and much more.

As always, we are looking forward to discussing this with you and take your suggestions.

Trudeez (Mar 25, 2020 at 0:33)
“I assure you it was a pre production model that had not received thorough heat treating” -bike product managers from (insert) company.

Jokes aside, this is really cool to see some of the things that these designers are working through. I applaud them for being forthcoming and showing that they’re working hard and not just gonna crank out some cheap junk that will break after a couple of months.

DirtbagMatt (Mar 25, 2020 at 21:22)
I have to say I have a ton of confidence in their approach and forthcoming-ness about the errors and refinements. I’d really like to get in the pre-order and financing if I can pull it off.

subwaypanda (Mar 25, 2020 at 0:11)
I love how open you guys are about the challenges of developing a complicated product. Really interesting stuff, keep it up.

Great job in my opinion!

boss-matsumoto (Mar 25, 2020 at 3:43)
Definitely I wold like to give a go on that frame if not that I just lost my job and can't afford anything at this time. All I hope is till the time frame will pass all tests and will be available I'll be still alive and within some work which make income.

Bhaack (Mar 26, 2020 at 5:49)
@Giacomo77 It takes lots of courage to put this all up. So eell done.
Do you understand that the fatigue performance of a welded joint is vastly different to that of parent metal.
Also i think you should have investigated where the cracked started with a metallurgical / micrographic examination, rather than investigating the material properties. (Maybe you did but haven’t published what you found). Actually even a close up phot can often be enough to perform an RCA.

Giacomo77 (2 days ago)
The crack started from the junction between Down Tube and Head Tube. The holes for the cable inlets where not related they made only the exit point of the crack. The FEM results confirm that. That's why we decided to move on with the gusset.

Bhaack (2 days ago)
@Giacomo77: to understand the failure you would look much closer at the details of the crack. Did it start at the root or toe of the weld? Or in the heat affected zone? What was the weld quality like. Any undercut or lack of penetration? The mod you are doing will help of course, but i would want to know the root cause to be sure it is addressed. Good luck.

Giacomo77 (1 days ago)
@Bhaack: thanks for your in depth interest and support. I can send you a detail picture in a PM. The crack started right next to the weld in the highest stress zone of the Down Tube. We also located light imperfections in the weld, further the angle of the weld was not ideal so it made a hard jump instead of a smooth one. I'm confident that smooth welding alone could have solved the issue but we wanted that area as safe as it gets.

aljoburr (Mar 25, 2020 at 1:23)
Amazing looking frame, would watch videos but computer got a virus or something as cant even stream on youtube Still can reheat treat by heating frame up with soap rubbed on the frame heat until soap goes black!

TheGambler88 (Mar 25, 2020 at 3:16)
really nice story to get a little more insights of the development and improvement of a frame on its way to production! ????

benmoosmann (Mar 25, 2020 at 8:18)
Cool to be able to see what the designers are working through, super interesting stuff.

telephunke (Mar 25, 2020 at 8:53)
cool project and cool bike, hope you guys succeed. looks like you are pretty close now

Giacomo77 (Mar 25, 2020 at 12:24)
I understand your concern but we snapped M8 aluminum shock bolts while Testing Max Overload at EFBE (Not Shown in the Video) which had no impact on the tiny baby itself. New frames will feature a M8 Ti bolt for the lower shock mount as well.

michael83 (Mar 27, 2020 at 0:40)
@Giacomo77:
I had the same thoughts as Steve on that shock mount. Everything else looks stout except for it. In testing you snapped an alu shock bolt, but are now moving to a ti-bolt. The extra strength of the ti-bolt now means something else will give first.

The upper member of that little link will be in tension mostly. I would imagine you won't shear the associated bolt but over repeated bottom out cycles the aluminium around the bolt hole will see high stress and crack or elongate the hole. In my work i tend to think about what will happen to things if the end user under-torques a bolt. Without the friction interface that comes from correct torquing, the little bolt will flex back and fore, and hence wear / elongate the holes.

is there a reason that this is a bolted link rather than a welded gusset between seat and down tube as on many other bikes? (I presume some degree of geometry adjustment by swapping it out?)

Just some food for thought, loving the series, honesty, applied engineering and correct use of engineering terminology!

Giacomo77 (2 days ago)
@michael83: hey mate I appreciate your thoughts. The shock mount is bolted on to allow for geometry adjustments and also for a mullet option with almost no change in geometry (only metric changes is, of course, the BB drop).
And yes you are right we do rely on correct applied torque otherwise the bolts might come loose over time or even shear off. But you should also consider that we are working on a high-end product here and we are maximizing performance where ever we can. These bikes compare to formula 1 cars rather than to normal cars so we expect our clientele to know how to use a torque wrench. If it passes the case test which applies up to 8000 Newton we can be confident that it is a good solution I guess. That's some rampage guy coming short over the canyon gap.