Video: Mountain Biker Rescued After Dangling Headfirst Off a Cliff

A mountain biker has been rescued following a fall that left him dangling hundreds of feet above the canyon floor on Mt. Wilson, California, last Thursday.

The unnamed rider fell around 40 feet from the trail and found himself hanging from the rock wall on his stomach with his head facing down. Two onlookers, including the rider's brother, were quickly on the scene and were able to lasso his ankle to hold him secure in that position until emergency services could be contacted. Thankfully, the fall happened on the south side of the mountain, facing the city of Los Angeles, where the phone signal is much better so rescue teams could be contacted immediately.

That wasn't the end of the event though, as when the rescue crew from the Los Angeles Sheriff Department's Special Enforcement Bureau (composed of former SWAT team officers with paramedic training) arrived they were worried the downwash from the helicopter would unseat the rider from his precarious position. The team described the rider as hanging on "like a cat" and explained that he was too scared to even rotate his head to look at them. 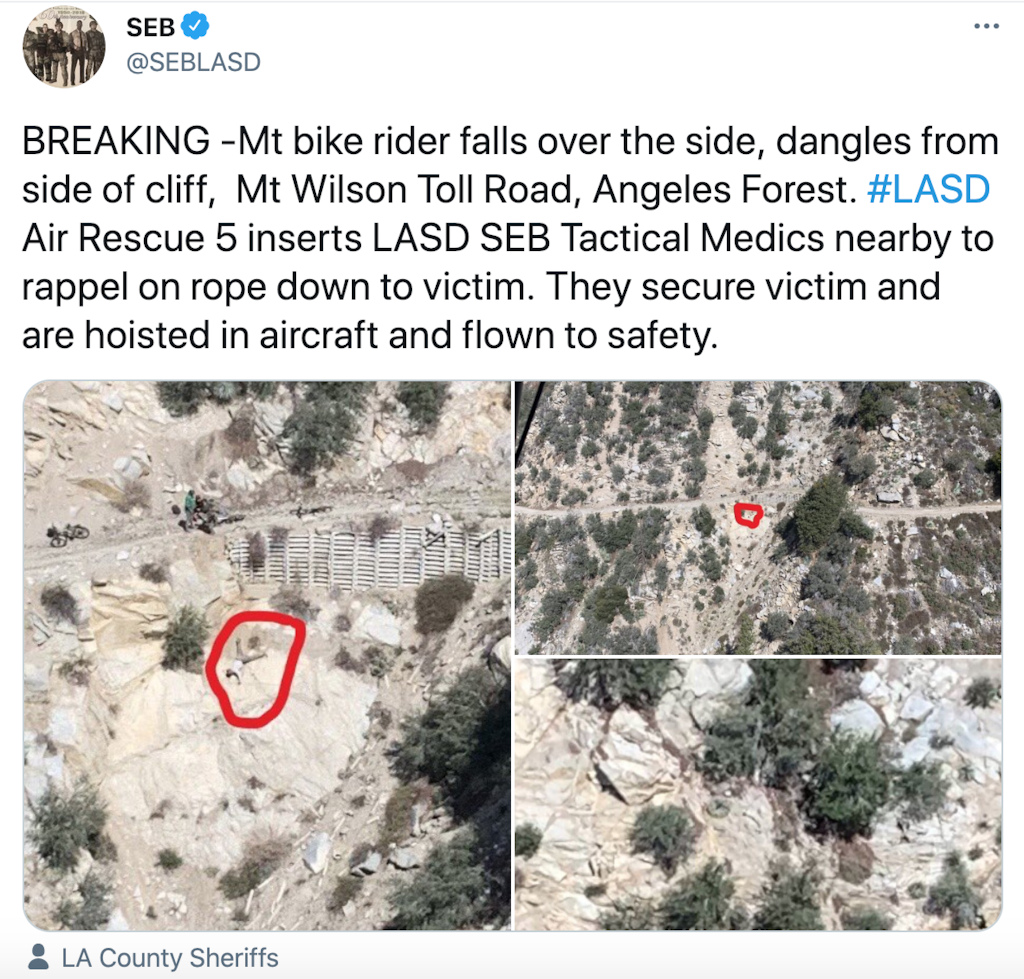 The L.A Times describes how Daniel Aleman, one of the rescuers, was dropped off further down the trail then used both of the other mountain bikers to be his anchor for a rappel point. He asked them both to sit down and then tied a rope to them so he could reach the stranded rider and secure him to be airlifted to safety. Aleman found the man shaken but conscious. He later told reporters, "Thank God, he was OK. That made me feel better. He was just stuck — in a bad spot.”

The rider's bike was later recovered from the bottom of the canyon. No serious injuries were reported from the incident.

jgdblue (Apr 19, 2021 at 4:31)
Article clearly not written by a mountain biker, leaving the most important question for the end "is his bike okay?"

scott-townes (Apr 19, 2021 at 5:01)
Yeah, I don't see the big deal here. At worst he would have pulled a Rogatkin by falling off a cliff, getting up and finishing the rest of his ride.

danielfloyd (Apr 19, 2021 at 5:11)
"The rider's bike was later recovered from the bottom of the canyon. No serious injuries were reported from the incident." I'm pretty sure this means the bike was fine.

RayDolor (Apr 19, 2021 at 8:28)
Before the rescue unit had anyone on the trail, they video'ed the scene, and I counted three people, including the victim, and 3 bikes. So, apparently, he got off his bike and fell, without his bike, off that cliff. The bike was never in danger. Thank god!

bcbikeman (Apr 19, 2021 at 11:13)
That was the first question that entered my mind when I finished reading the article!!

hamncheez (Apr 19, 2021 at 7:47)
Ha, I grew up riding this trail. Its not just exposed, its tacky for 5 min after a rainstorm then its just loose sand the rest of the year haha

vondur (Apr 21, 2021 at 17:40)
@rrolly: The upper sections of the trails are high enough elevation to have real trees. Lower sections not so much.

squidvicious (Apr 19, 2021 at 14:28)
Charlie Bronson's always got a rope. He's always got a lot of rope around him in the movies and they always end up using it

ColeLancaster (Apr 21, 2021 at 18:45)
I was thinking you could maybe use shifter/dropper cable, but then again he might not have a foot left by the time you pull him up.

naptime (Apr 19, 2021 at 5:12)
reminds me of a little crash I had where I ended up on my back, head facing down a steep incline, pressure suite an neck brace. some walkers where like "are you ok?"
I replied "I can't get up"
They panicked "DON'T MOVE, DON'T MOVE, We'll Get Some Help, We'll Phone The Police!!!!!"
I replied "nah I'm OK, I just can't get up" as I'm wiggling my arms an legs about doing the dying fly trying to get up off my back! :'D

RonSauce (Apr 19, 2021 at 6:21)
Had the same thing, on my back inverted, my pack was caught on something so I couldn't roll to the side. The 2 bikers I just passed before the crash found me and panicked when they asked if Iturtles. It took some convincing to get them just to extend a hand. Chose your words wisely when you are turtled.

inside-plus (Apr 20, 2021 at 0:02)
Not a nice situation in deep and steep powder, no leverage to stand up you just keep sliding down and sluff keeps burying you.

DhDWills (Apr 19, 2021 at 7:28)
In the interest of not setting up some karmic fail for me in future rides with serious exposure, I will say nothing else except...knock on wood.

carym (Apr 19, 2021 at 8:21)
The exposure on the Mt. Wilson downhill is bad. Super narrow loose trails with long near vertical drops. While not technically hard, the penalty for a miss is high. Downieville on Third Divide is comparatively wide and the drops off to the side smaller (but hard, sharp rock).

Sscottt (Apr 19, 2021 at 5:27)
It depends on the local government. Some places are starting to charge for rescues because of too many people doing stupid things and using the rescues to get out of trouble that they could get out of if more prepared. Many are free. If your house burns down, you don't get charged for the fire crew.

dubski (Apr 19, 2021 at 5:39)
Common misconception of the american health care system is that everything costs money. A search and rescue like this would not cost the victim anything. Although if they can prove you were being negligent and intentionally are putting individuals lives in danger, then they will for sure charge you every cent it took to rescue you. If you're in a car wreck, an ambulance can come out to you and the paramedics can perform medical services for you, but as long as you don't ride in the ambulance back to the hospital, it's free.

kcy4130 (Apr 19, 2021 at 5:48)
@Sscottt: Yep, also the free SAR are often partly funded by donations, and people who are rescued are often encouraged to donate in gratitude, or guilt tripped. Also, not all fire fighting is free. If a farmer or land owner does a controlled burn on a day that it's not allowed (due to high wind, it's called a red flag warning around here) and it gets out of control and requires fire fighters. Then, that land owner has to pay for the fire fighters. They also have to pay to replace any houses/barns of neighbors that were burned.

mtbmaniatv (Apr 19, 2021 at 6:15)
If I'm not mistaken, that's right next to the road at the top so they wouldn't have had to walk terribly far. That assumes distance hiked in is correlated with cost. It looks like a nice ski drop in, but there's never any snow.

ryan83 (Apr 19, 2021 at 6:25)
I’ll also add that over 90% of Americans have health insurance (employer, Medicaid or Medicare) which guarantees a minimum amount of coverage. While search and rescue can be highly dependent on the situation, once in the ambulance, they might be stuck dealing with a shitty deductible but out of pocket max is unlikely to exceed $8k. For mountain bikers who opt not to have insurance...they are just making a dumb life decision.

kobold (Apr 19, 2021 at 7:24)
In Utah you can buy a policy form the state for 40$ annually that will cover like $50,000 on a search and rescue. They started charging for most rescues here because people are stupid and put themselves in ridiculous situations. Happens more and more as the population booms. Utah sucks now.

DhDWills (Apr 19, 2021 at 7:34)
I really don't know, but I've always been told search and rescue from helicopter is in the tens of thousands. At the ski hill that occasionally pays me to do stuff, they tell me getting rescue from the out of bounds run is mucho bucks. So, I disagree with these other posters. But like they said, depends on state, county, etc. I call it personal responsibility reinforcement.

moabenchilada (Apr 19, 2021 at 7:55)
Charging for SAR can be a bad idea. There’s been a number of incidents where people attempt self-rescue to avoid costs end up in an even worse position and still need rescue or they end up dead.

nvranka (Apr 19, 2021 at 8:14) (Below Threshold)
@rossluzz: that is much more rare than retards calling for a heli when they’re overheated at a local land locked trail system surrounded by suburban neighborhoods.

fullendurbro (Apr 19, 2021 at 9:22)
No. I used to do SAR. A rescue almost never costs money. The exception would be if the person is gravely wounded and a med-evac team needs to be called in to fly straight to a hospital. Then the Med-evac company will charge appropriate costs, but SAR units work with Sheriff's department, Civil Air Patrol, USAF, and the US National Guard for flights. Sheriff's dept assists out of duty and is publicly funded, the other three are happy to assist as it's training hours for the pilots.

suspended-flesh (Apr 19, 2021 at 9:32)
@mexicant: Not if it's the good ol California Highway Patrol's helicopter. CHP chopper flights to hospitals are free. Just depends who gets the call. That is the problem with for-profit medical care and don't get me started on for-profit prisons.....

CTYankee (Apr 20, 2021 at 19:51)
It can also depend on where you are. In many national parks SAR is free IF you stay in marked trails. If you are off trail where you should not be then you can be billed. In this area there is also a SAR that usually responds. They are all volunteer and work with local authorities with helicopters.

OldDert (Apr 21, 2021 at 19:22)
@nvranka: I’m sure you didn’t intentionally mean to slander folks with intellectual disabilities but that slang needs to be dropped from popular culture.

horse-with-no-name (Apr 19, 2021 at 12:57)
This happened to my friend in the same place a week ago. We were riding the Wilson trail and he washed out on a loose corner and just disappeared off the side. He is alright and got back to the trail, but lost his bike.

Cro-Mag (Apr 20, 2021 at 21:23)
Covaids has everyone in fear response mode......time for people to get their shots so they can get comfortable again, stay upright on their bikes and deal with themselves when they crash Cm!

maxxx (Apr 19, 2021 at 4:55)
Going to assume a more badass sounding name for a search and rescue technician. Of course a SARTECH is one of the most badass jobs on the planet, but I supposed having "technician" in the title doesn't sound nearly as cool as having "tactical" in it.

kcy4130 (Apr 19, 2021 at 5:14)
Tactical Assault Medic: A medic who rappels from the chopper, karate chops all the bad guys, then rescues the guy and treats his injuries.

Marquis (Apr 19, 2021 at 8:46)
In the LA County Sheriff's Dept., the SAR team that rescued this guy is comprised of former SWAT officers who are then trained to be paramedics. The deputy who rappelled down was a SWAT officer for 20 years before joining the SAR team. Pretty interesting combination of skills and training.

ejopdahl (Apr 20, 2021 at 0:07)
I've washed my front wheel off the edge of a big cliff at mt. wilson and belly flopped chest first to avoid going off the edge. It's scarier than it looks there

flyingchancla (Apr 20, 2021 at 16:20)
That's one of my local spots. There are some steep cliffs there. Looks like he crashed going straight? Or slipped while taking a piss?