I've built such a huge drop for the first time! I am very glad that I turned my old dream into reality. We've waited several weeks for the rain to stop and the speed trail to become dry. And finally, I can show you the video. Be sure to watch with headphones or good monitors to immerse yourself in the atmosphere of RAW. 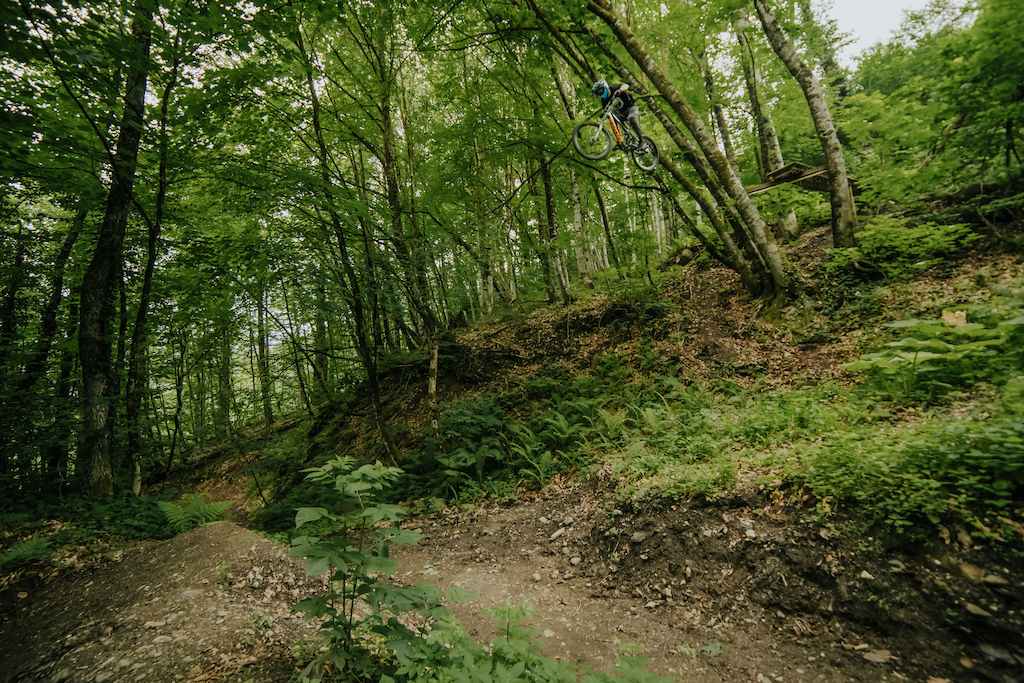 At the beginning of May, while climbing the green track of the bike park in Sochi, I saw an old construction road running along the new serpentine, which the builders of the latter used to get up to 960m, and thought it was a good spot to land. It took only 8 days to build. I have been looking for a suitable place for a long time.

I think this is not the most difficult jump in size and flight time. But a short landing and a turn after it, as well as a turn before the jump add some difficulties ... Diagonally, from the end of the drop to the start of landing - 14 meters. 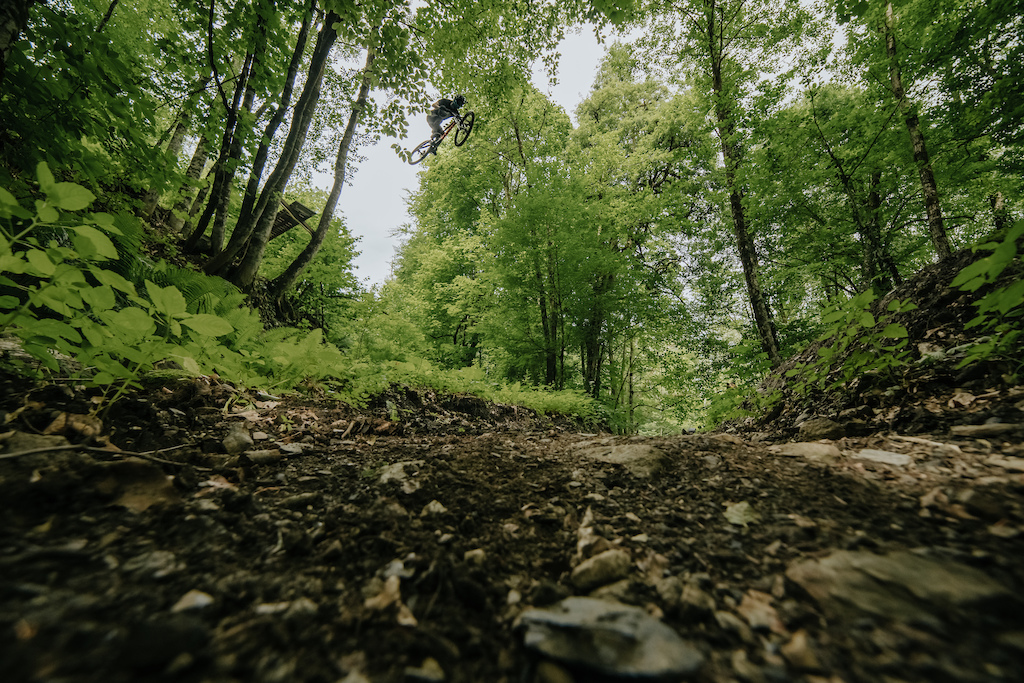 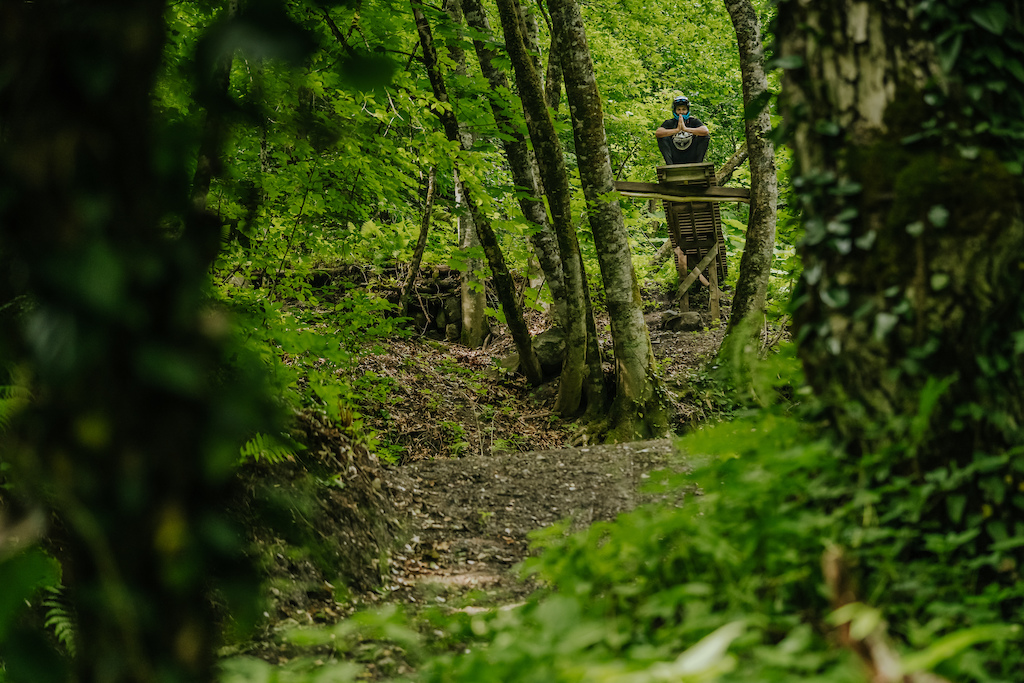 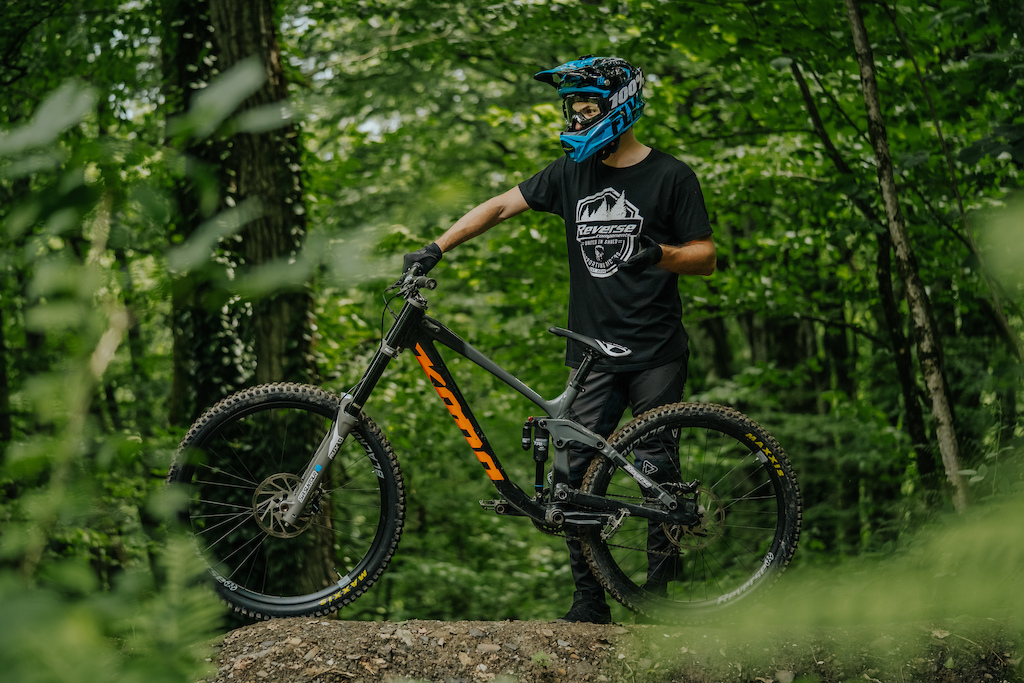 chriskneeland (Jul 1, 2020 at 10:04)
Y'all can keep your electric motors and clunker wheels. This is the type of shit that gets me fired up.

IamTheDogEzra (Jul 1, 2020 at 12:46)
That's all well and good but have you ever had someone come to the door while you were napping and dreaming about unattended Big Macs? That gets me fired up every time.

armeniandave (Jul 1, 2020 at 15:37) (Below Threshold)
This was awesome but only .01% of riders can actually do this kind of
riding. If this gets you fired up great but don't knock what gets other
people fired up!

GnarAZ (Jul 1, 2020 at 21:02)
Very Benderoni! Has Kirill recovered and gotten back at it? Nice to see another big Russian sender making the front page!

likeittacky (Jul 1, 2020 at 19:03)
That would be one of the worst case landings in history if he came up short, that knuckle on the landing is medieval !

Both wheels at once up the curb is at least something. I usually do one wheel at a time going up these days.

oneloosecrank (Jul 12, 2020 at 3:25)
@tacklingdummy: I'd have worn all that and probably have needed it - fair play to you for having it and clearly being competent enough to not need need it! Safety first bro

catchinfishisfunner (Jul 1, 2020 at 10:39)
I'm supersized the frame absorbed the weight of his massive balls

mountainsofsussex (Jul 2, 2020 at 2:45)
How do you decide what size takeoff to build and what speed to hit something like that? It's not like he's got the option to gradually move the takeoff back, and of you've got to hit it first time, coming up short pretty much = death in this case... I know the short answer is "practice"!

takeiteasyridehard (Jul 1, 2020 at 10:54)
Nice work! That looks really well built, and more importantly - great execution on hitting it! Were there any sketchy clips?

veero (Jul 1, 2020 at 14:22)
Tyre buzz or bum cheeks flapping? I know mine were watching that. Fair play, I suppose with a dangly pair that heavy you're gonna bottom out any landing.

CuyunaHTmn (Jul 1, 2020 at 14:32)
People downvoting you are probably thinking ‘they must break you’ for being insensitive. That wasn’t really an exclamatory line in the movie tho so maybe they think you botched it.

NiklasRausch (Jul 1, 2020 at 11:18)
PB: "Been a while since we've seen a proper freeride one-hitter."
But.. i've seen a lot of them in one line ridden from a bunch of crazy riders, think the Gap-/Drop at Loosefest (Malmedy) is even bigger..!? I think around 25-30 meters, that' what it looks like when you stay next to them.
But no question.. that is a big one for sure, CONGRATS!

phobospwns (Jul 2, 2020 at 7:39)
I cannot believe how amazingly smooth that was... what a perfectly built jump- so long as you get the speed right!

friendlyfoe (Jul 1, 2020 at 16:14)
Did you just learn this today? When I moved to BC I just accepted that I sucked at riding. You can't have an ego about trying to keep up with anyone. There's just too many crazy fast people.

pdxjeremy (Jul 1, 2020 at 10:08)
Good thing he had those codes, the levers on his shimanos bite point would have probably been in who knows what position on the landing

sspiff (Jul 1, 2020 at 11:45)
@pilatusflyer: Wow! I never knew you could learn the lengths of the 2nd and 3rd legs of a right triangle from just the hypotenuse.

...oh yeah, you can't. Pythagoras and all that.

But here’s the thing: Bender was attempting these drops on a 13”/12” custom dh bike.

The guy in this video went huge!

pilatusflyer (Jul 1, 2020 at 19:01)
What do you think a more realistic guess of the vertical to horizontal ratio would be given a 45’ hypotenuse?
I was just basing it on road gaps I’ve seen in person. @sspiff: