It seems as though the seasons here in the Northeast fly by like a redlined enduro stage. You clock in and hammer down only to see red immediately. Doing all you can to hold it together while riding on the edge, you focus simply on not screwing up the next turn or technical section, only to hear the beep of the transponder tell you it's already over. Our season had so many highs. To list them all would take a while, so just like last year, we'll just give you the summit. 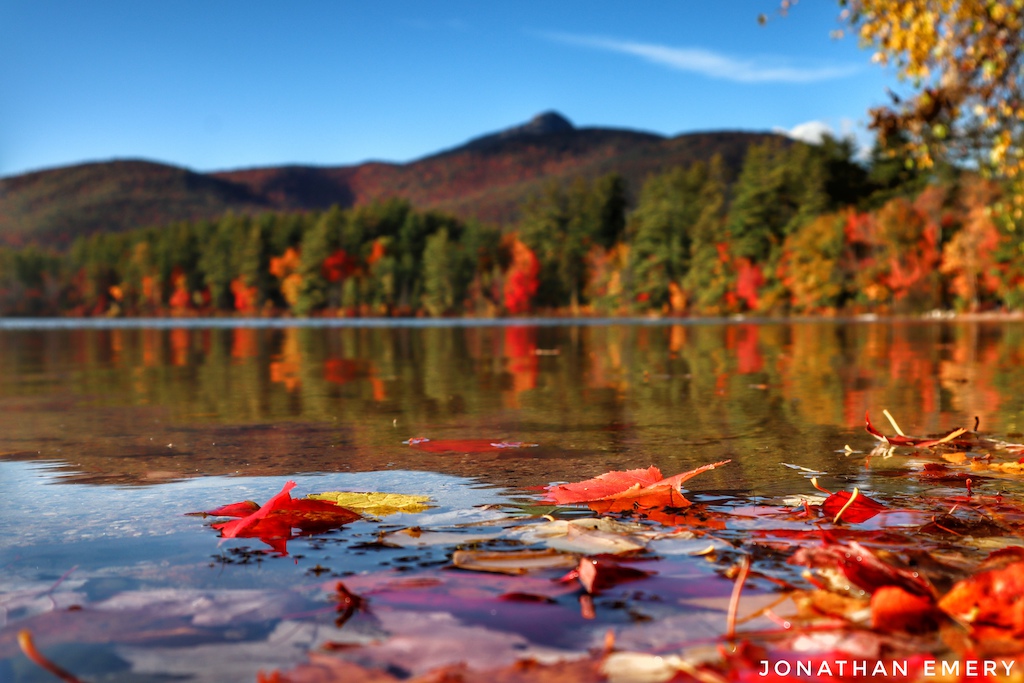 It doesn't get any better than the Northeast in the Fall


For this year's summit, we kept it local. Last year traveling through Utah and Colorado was awesome, but it's so hard to beat the terrain we have in the East at prime-time leaf-peeping season. It just so happens that at the same time as our summit, RideNoco was ramping up for some big announcements to the local riding scene in North Conway NH for 2020. 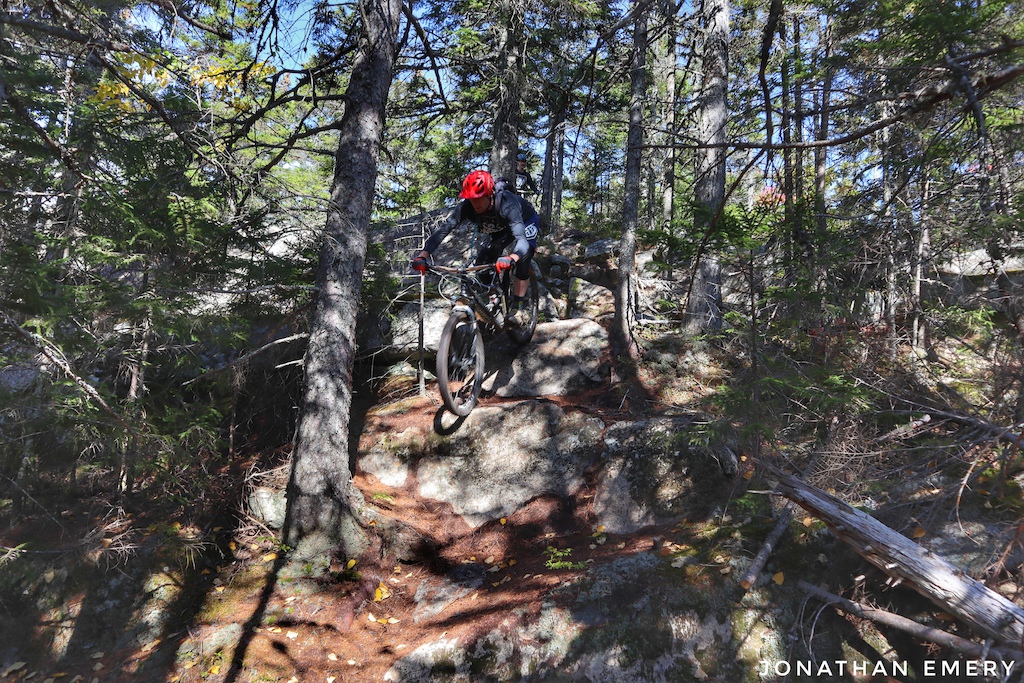 Backcountry hiking trails in the valley offer some unique challenges 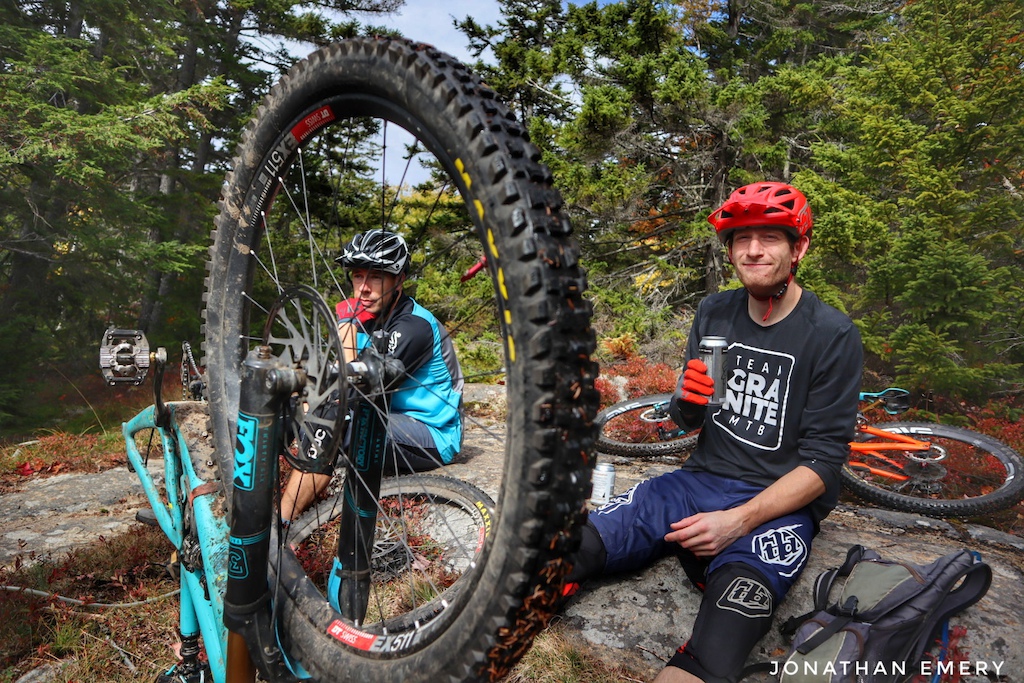 Mid ride brew? Tucker knows how to let loose on summit weekend
We started the weekend with some shuttles hitting up Hurricane MTN road. I invited RideNoCo's Chris Mckay to do a lap with us on his lunch break. We chatted, and I picked his brain on the way up about all the ins and outs of what they are trying to do for MTB in the Mount Washington Valley. I knew a lot of it already as I follow the area closely with my ear to the ground. (It's easily my favorite place to ride in the East.) We got to the top of Hurricane Mountain road with the crew, grabbed our bikes, and proceeded to do a hot lap down some of North Conway's newest Enduro style trails. 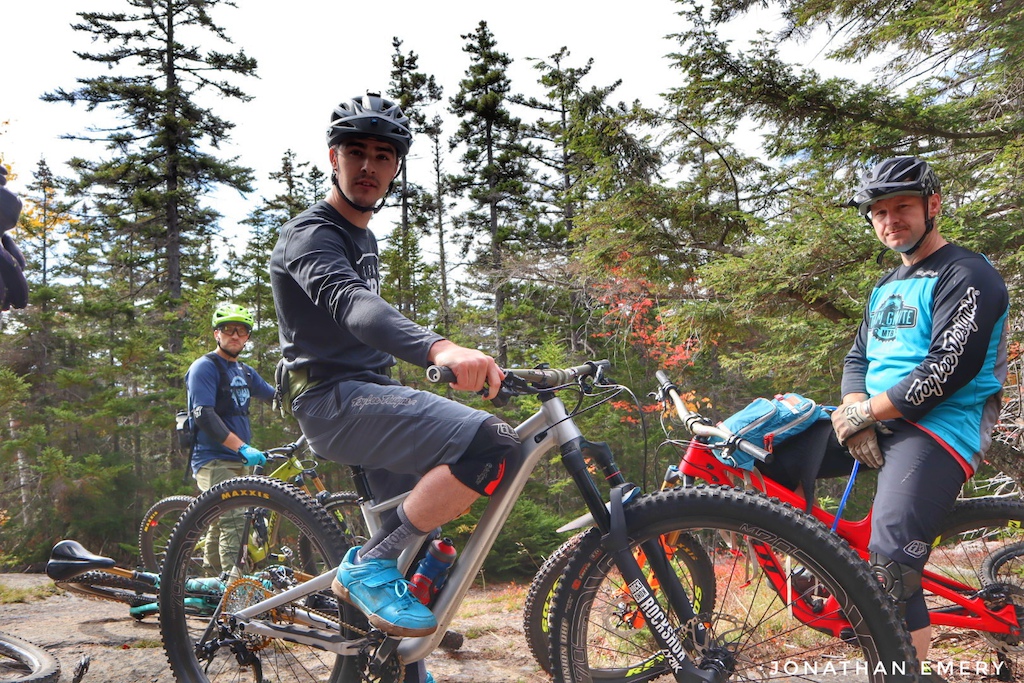 Why so serious? Probably because I made them hike for an hour to start the ride
As the weekend progressed we must have descended 10k' in just a few short rides. Switching it up between flowy bike park style trails such as Hurricane, rough and rowdy trails with optional gap jumps such as Kandagnar and pinball, and hike-a-bike adventures we got a little taste of everything the area has to offer. Just like that it was Saturday night and a few of us descended upon RideNoco's leaf-peeper bash at Theatre in the wood. With beers in hand we enjoyed some local films and they announced to the community all the big things to that they have been brewing up. The biggest news came in the form of local trail guru Knight Ide being involved in multiple trail projects in 2020, a 4 person paid trail crew to maintain the trails around the valley, Tyrol trails building a brand new beginner-oriented bike park at Cranmore resort, all being made possible by donations, and generous grants from White Mountain Trail Collective. 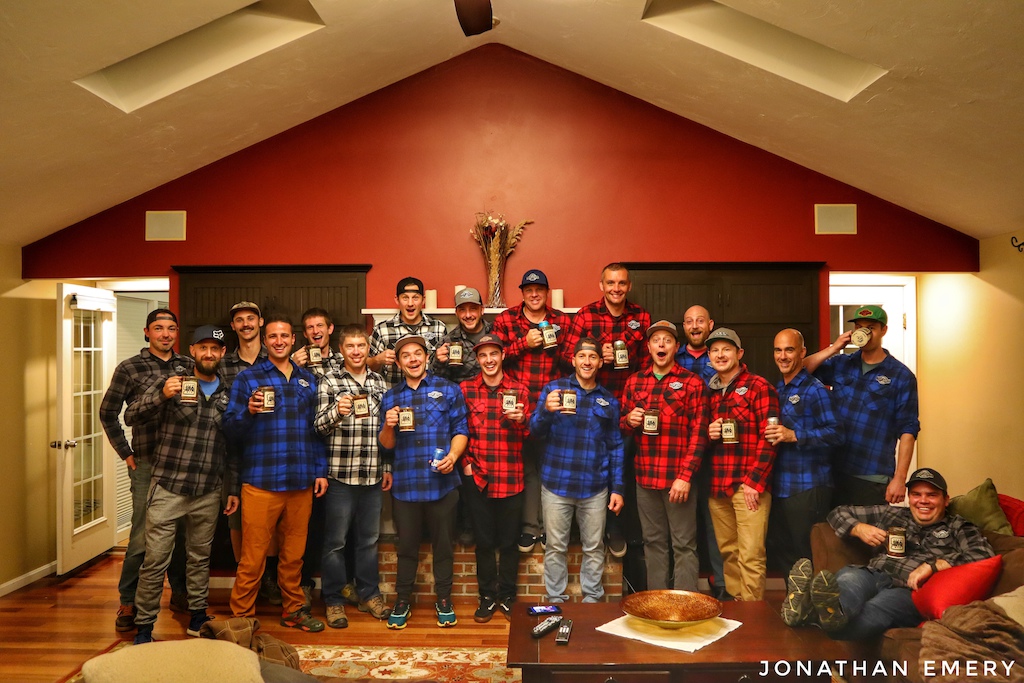 Before we knew it, the weekend was over and we were headed home. As the season is now officially over and news of major trail closures at the other mountain bike mecca in the Northeast; Kingdom Trails (a topic for another article), it's nice to have some good news for mtbing in the region right before the holidays. I truly can't wait for next season, watching the progress in our team, in the region for MTB, and of course more of #bikethewhites. 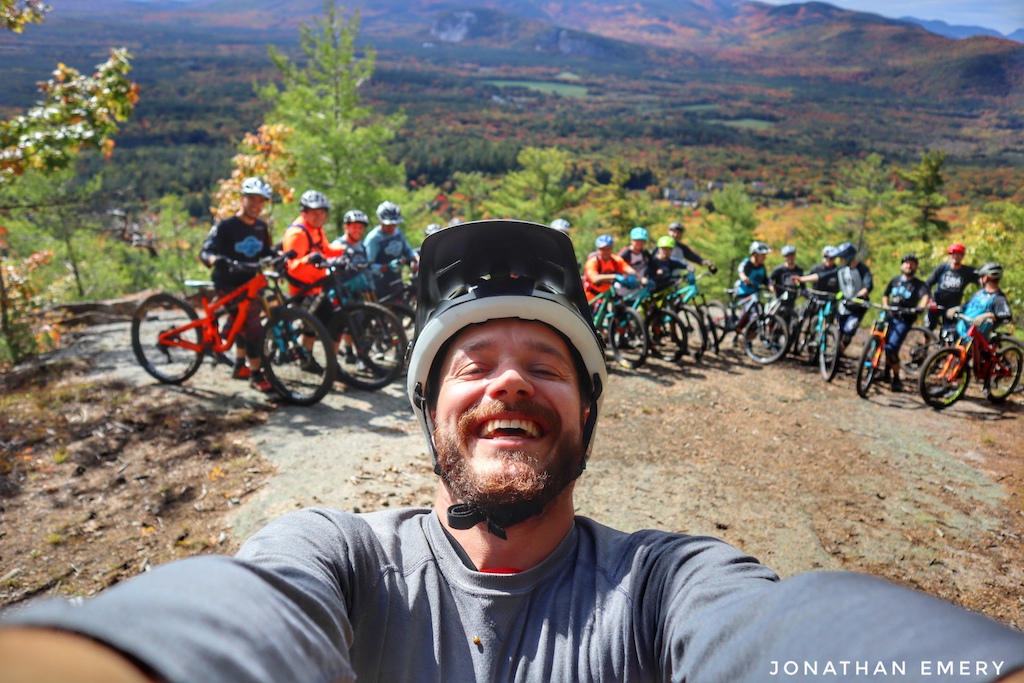 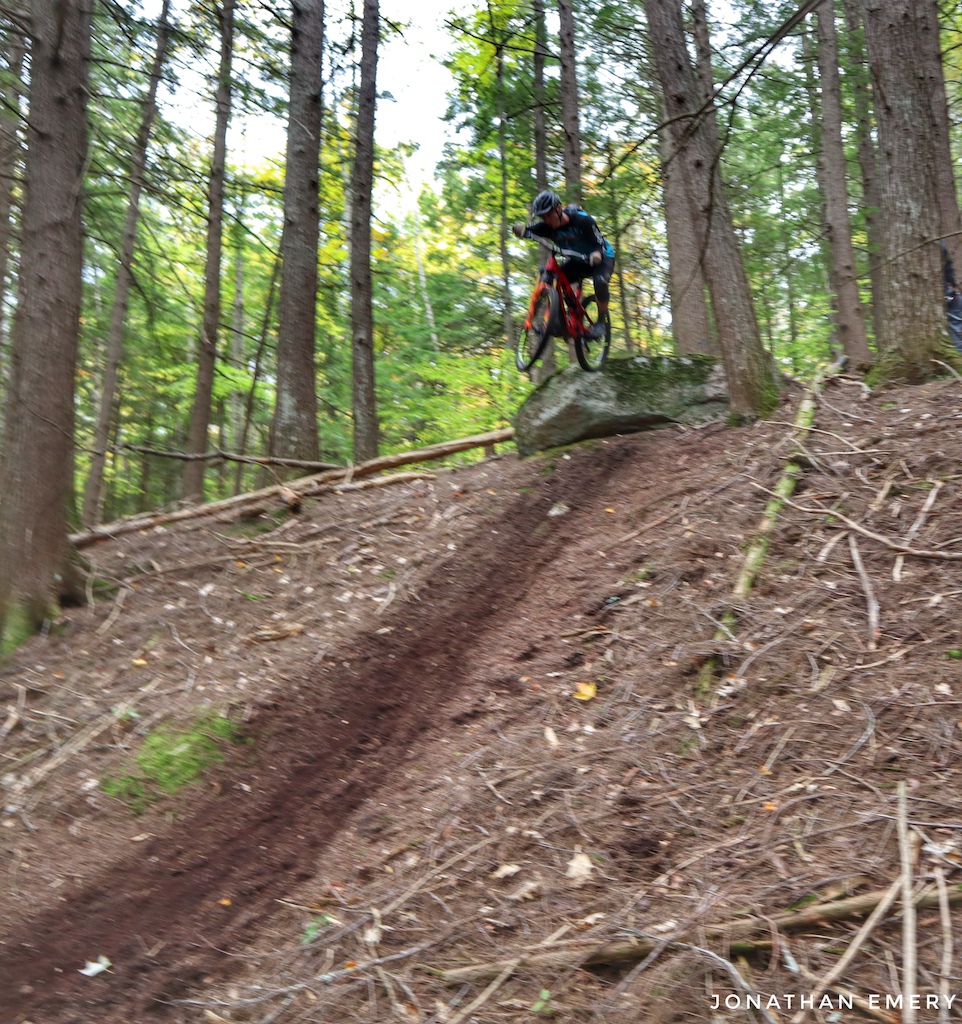 Left: Mike with the epic dslr selfie Right: Kyle styling off a small drop at the end of a hike-a-bike adventure ride

elsinore (Dec 29, 2019 at 14:19)
@chadchandler7:
Don’t think we have to worry about Lycra clad anything jamming up trails
Like Kgnar, Pinner, Charlie etc..

Amlundy9 (Dec 28, 2019 at 7:20)
Awesome video, love to see videos like this showcasing New Hampshire trails. Definitely got me stoked to ride these trails next year !

TannerValhouli (Dec 28, 2019 at 8:12)
Sick video! So stoked to get up there over the next year and watch it grow while riding the best trails in the east (maybe even North America?)

projectnortheast (Dec 28, 2019 at 9:56)
Thanks man! Ya the scene just keeps getting better and better up here in the Northeast!

Lowthar (Dec 29, 2019 at 15:52)
Subscribed also, moved to southern NH 3 years ago been wanting to get up that way. Looks sick @projectnortheast:

xxburton4lifexx (Dec 28, 2019 at 18:20)
Definitely sucks about KT. Hopefully something will change by spring. But hopefully some of the other up and coming areas such as NOCO and green woodlands can keep rolling strong with more trails for people to ride.

sleemans12 (Dec 30, 2019 at 15:38)
Damn, looks fun. Didn't know there was that much dirt in NH, let alone flow! Last few times I've ridden there it was all shoulder pounding janky rocks. Great job finding the dirt!

projectnortheast (Dec 28, 2019 at 14:00)
Its gonna get huge up there! The terrain available is what this area has been waiting for... BC like terrain. Just need to build it!

andyelliott3 (Dec 29, 2019 at 5:35)
It's good but its all focused on one road, hurricane mountain rd, and there aren't THAT many trails there. hopefully they build more.

projectnortheast (Dec 29, 2019 at 6:06)
There are atleast 50-60 miles of trails just outside of main st. Hurricane mtn road makes up maybe 12 miles of that... yes most of the enduro style trails are there... but that's because it's the biggest elevation available. Maybe explore a little more... you'll be surprised if that's all you think is there

andyelliott3 (Dec 29, 2019 at 6:36)
i'm sure there are more great trails, im just saying articles about the Conway area always make it out to be this vast expanse of epic Enduro trails everywhere like its BC, when really its basically just kandagnar..as evidenced in this video. hope it changes and would love to help out on any build days for more new trails.

projectnortheast (Dec 29, 2019 at 7:35)
@andyelliott3: kandagnar, pinball, charlie dont surf, red tail, sendero, hurricane, black cap connector, cathedral, white horse, orange chair... those are mostly all the enduro style trails with good elevation.. not to mention Miles of XC and backcountry adventures on local hiking trails... your missing alot. Sure they dont all have big berms and gap jumps like kandagnar

projectnortheast (Dec 29, 2019 at 7:36)
@andyelliott3: this video has atleast 5 or 6 different trails including ones that arent even on the map

projectnortheast (Dec 28, 2019 at 6:48)
Not even close to dead but Darling Hill trails will basically be broken in half with landowners in the middle of darling hill on both sides closing their land to mtb access.

smithcreek (Dec 28, 2019 at 14:47)
@projectnortheast: Damn. That sounds tough. I always wondered what would happen if landowners backed out.