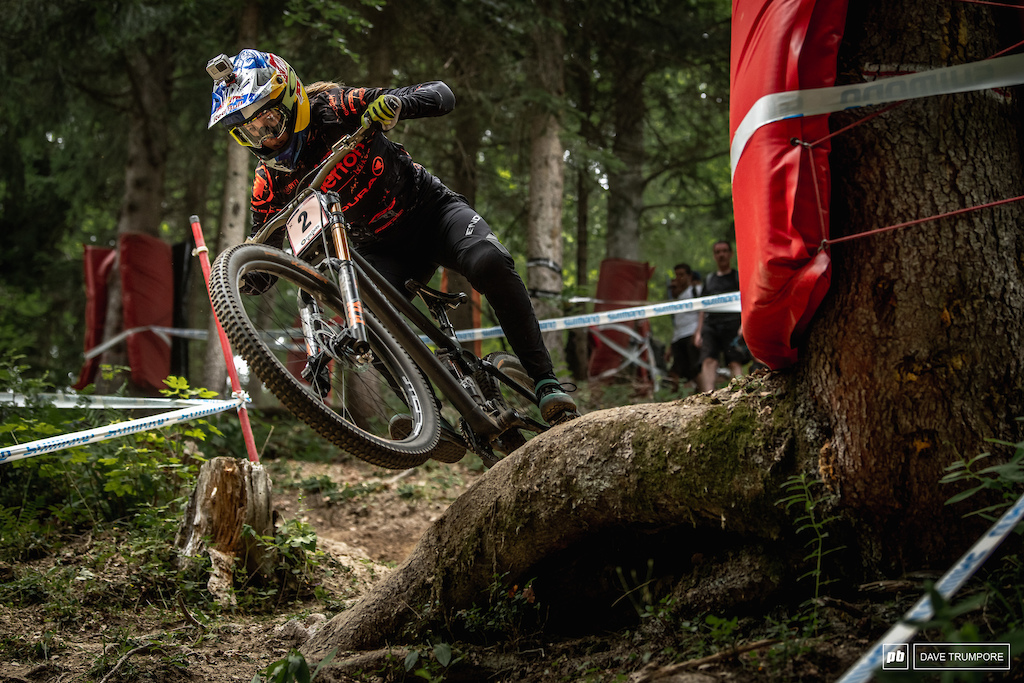 Rachel Atherton has today announced she will be aiming to return to World Cup racing in Lousa on March 22 in an interview with Red Bull.

At the time of the interview, Rachel said she had six more weeks of rehab to complete with the World Cup still nine weeks away. This would only give her three weeks to prepare at full strength but she is still aiming to be on the start line at the first race.


Rachel injured her Achilles on the final drop of the Les Gets course in July 2019. Lousa will be more than nine months after the injury, which must surely be one of the longest rehabs of Rachel's career. She also spoke to Red Bull about her first time back on the bike after the injury.


You can watch more of the interview where Rachel discusses her rehab, Vali Holl, and her wedding plans, below: 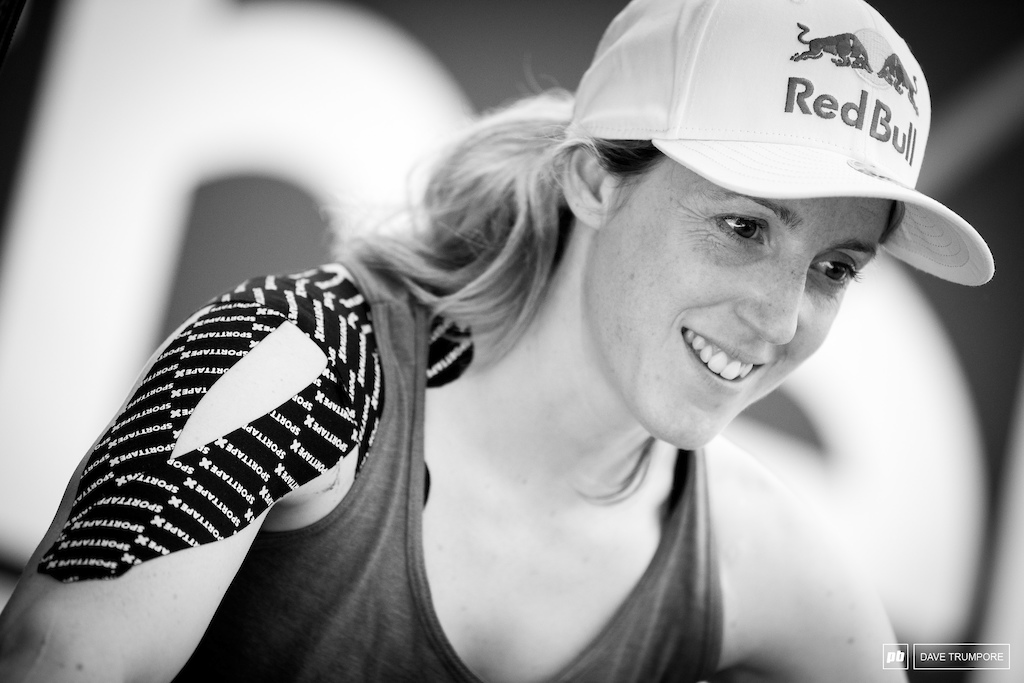 TommiHXH (Feb 5, 2020 at 1:38)
Them Athertons are made of strong stuff. Wonder what they had in their porridge growing up?

AinsleyTrimix (Feb 5, 2020 at 1:48)
PomPom is likely to be back fully fit, as will Seagrave, so chances are it will be a close season for those two. Perhaps later in the year Rach will be able to win again. It will be very intersting to see if those that were winning last year can do so again this year.

Boosting (Feb 5, 2020 at 8:06)
I think you might have forgotten to mention next year's overall winner, CABIROU!

ROOTminus1 (Feb 5, 2020 at 12:35)
I agree. I think the standing if everyone is on top form has been #1 Rach, #2 Pompon, #3 Tahnee, #4 Tracey, #5 Marine.
Rach is going to have to build race speed back up from the injury over the first few races of the season. Myriam is well recovered by now and very consistent. Tahnee has the ability to be on the top step in a square fight, but has been finding her risk/reward line over the last few seasons. Hannah and Cabirou are of a similar level and it's always anyone's guess as to which comes out on top, and there's a few usually just behind them like Siegenthaler who pull something special out of the bag every now and then.
The women's competition isn't as wild-card as the mens, but there are fierce battles race after race that are a joy to watch. And then there's the excitement of where Vali, Anna, and Millie will fit in... bring on the 2020 season

Boosting (Feb 5, 2020 at 12:51) (Below Threshold)
@ROOTminus1: you are forgetting an obviously important factor; age. Marine and tahnee are still Very young and are now getting closer to their peak. If vintage Rach shows up right away, she'll win. Tracey is passed her Prime and will be finding it hard to top 5 this year. Emilie gets a top 8 when she's lucky and top riders crash but it's nowhere near a threat. Vali is not 100% commited to racing because of school so I don't think she will be a constant podiumer. Millie is nowhere close to ready for elite racing.

All and all, you're way off, chap.

ROOTminus1 (Feb 5, 2020 at 14:53)
@Boosting: That's where I think the standing have been, but that's my opinion based on observations from the last couple of seasons.
You're right that time and injury will have taken their tolls on the older riders, and the energy and fearlessness of youth is on the side of the younger women, but experience and the ability to manage nerves, expectations, and the general pressures of racing will also be a factor in the results. I think the new blood will be great competition for the established riders, and it seems in the video that Rach is excited for the challenge, and I'd guess the future of the sport.

Balgaroth (Feb 5, 2020 at 1:02)
This year is gonna be hard for Cabirou, Tracey and the few others that got a taste of podiums when they will have to fight with Myriam, Tahnee and hopefully Rachel once she is back to strength.

Balgaroth (Feb 5, 2020 at 2:28) (Below Threshold)
@jesogang: you are right but unless she bumped up her speed over the winter she will most likely be fighting with Cabirou, Tracey and the slow ones rather than with the few fast girls.

Clem-mk (Feb 5, 2020 at 4:57)
@Balgaroth: wait and see if Marine step up like she did the last years she could equal and beat Thannée or Myriam.
What she does on jumps is phenomenal, she miss just a little overall speed.

Balgaroth (Feb 5, 2020 at 5:27)
@Clem-mk: My feeling all last season was that Tracey and Marine were only fighting for the top stop like they used to for the 3rd/4th spot but since the 3 usual contenders for the win were gone that lower rank fight made it to the news. I hope for Marine I am wrong as having 2 French athletes on the top of the sport would be great but I am rather sceptical. Few more weeks to see what's up

Conclusion: she got roosted when Myriam and Tahnee came back to the WC. Now if noothing goes wrong and she keeps progressing she is most likely the new Rachel of the years to come but she will need to increase her speed still. She is young and technically should still progress technically and physically but nothing is done and I doubt she will be a serious troublemaker this season for the top spot. Maybe in 1 or 2 season once she i sdone with school, race full time and got stronger.

Jrtf (Feb 5, 2020 at 6:38)
it's no dig at rach shes the g. o.t but also had one of the worst possible injuries maybe afew rounds to get upto speed.the raw speed cabirou showed last year is amazing if she can stay on that is.her like Rachael are the only woman that look visibly faster than the girls and look like a mans riding.its going to be a good season anything can happen

gramboh (Feb 5, 2020 at 9:34)
Big fan of Rach and wish her the best but this seems like a pretty aggressive timeline given how she looks mobility and strength wise on her instagram. I have seen she is doing some smooth/flow track rolling on her trail bike. Obviously she will take her doctor's medical advice, would just be awful to see her reinjure herself pushing to come back too soon.

homerjm (Feb 6, 2020 at 4:48)
A few friends met the Athertons while training in Spain last week,Rachel was ridding slow,still healing but on the bike... Both were very friendly and happy to ride with normal riders. This people is made from another mold,true professionals athletes.

Can vouch for post-injury jitters. Sciatica kept me off one leg for a month, and atrophied calf & glute meant totally lopsided pedaling. It took months to get back to normal. Super weird feeling at first.

robinfisk (Feb 5, 2020 at 4:09)
Looking forwards to seeing Cathro talking to Rachel about the fastest line during the track walk

LaurensVR (Feb 5, 2020 at 0:27)
I thought she was getting married to Vali for a second... For real tho, I hope she takes all the time she needs so it doesn't happen again.

jerseyjinx (Feb 5, 2020 at 1:59)
will be after anne caros win record for sure , might even be an update on the atherton bikes website this yerar haha

garrettstories (Feb 5, 2020 at 11:45)
Rooting for you! Stay strong mentally in this home stretch of recovery.

platnum (Feb 5, 2020 at 17:03)
Not really, I suffered a complete rupture several years ago. It was surgically repaired. Two weeks in a plaster cast followed by ten more in an air cast. Another month with a wedge in my shoe. I was back on my bike within six months. Now that said, the recovery is painful as the tendon has to stretch to get back to full range. When fully healed it is unlikely to cause her any problems because the amount of scar tissue around the repair makes it quite strong. On a side note a lot of my therapy was on a stationary bike so I was able to work on my fitness a little.

beirge294 (Feb 5, 2020 at 19:35)
@platnum: I ruptured mine a week after Rach. 6 1/2 months ago. I am in the gym every day building the calf up and the muscles around it (atrophy occurs in the quad, glute etc). I still cannot lift my body weight off the ground with my right calf. I’m sure she has similar issues. It’s the eccentric movements that are a bitch ( drops) and fatigue. I do know what I talking about. I doubt most are 100% at a year post injury.

mtnbiker1978 (Feb 5, 2020 at 20:01)
@beirge294: I'm completely agree. I ruptured my achilles in April and Im just now getting back to aggressive trail riding with no drops. If she can do it (and she's more likely than me, I'll admit), that's pretty awesome. The hardest part for me has been mental, wonder where her mind will he with that. I stopped at the bottom of my first real climb wondering if I was going to rerupture with the first hard pedal stroke. I think Maribor is much more realistic a goal. Good luck to her though.

platnum (Feb 6, 2020 at 4:28)
@beirge294: that is true, it’s been years now and my one calf is still noticeably smaller than the other. I’m resigned to the fact it will likely always be that way. Atrophy in my quad wasn’t too much of an issue because I was focused on doing what I could to avoid that. Lots of leg lifts, a lot of walking after a while after I’d been in my air cast for a while. A lot of work in the pool as well, I think that helped a lot. I was easily 100% in a year. Keep working, you’ll get there. Good luck. And yes the pain is normal.

mangochaos (Feb 6, 2020 at 11:58)
I thought the same thing. KD sitting out an entire season, will be over 18 months before he is back on the court playing again (albeit there is a $30M+ contract at play here too, and bball is much more calf/achilles intensive). Surprised, but lets hope it works out!

Chilliwacker (Feb 5, 2020 at 0:32)
Ride flats and hardtail this season Rach. You've nothing else to prove