JBC Bikepark in Jablonec, Czech Republic was the host for Round 4 of the 2015 4X ProTour. After three superb rounds already, it was time for the riders to take on the most challenging track on the 4X ProTour. Famed for the 'Marosi wall-ride pass'; this track has it all. Gap jump from the start, huge jumps, wooded section full of roots and rocks, wall ride and technical jumps that really catch the riders out. It is the ultimate 4X challenge and the venue for what was an amazing night of 4X racing.

The event started on Thursday with practice. An hour and a half for the riders to start working on their lines and getting used to the high speed and nature of this track. With a new hip jump section, there was an extra challenge for the riders to learn. As with the event in previous years, it took riders the most time getting used to the speeds. In excess of 50mph at times on a hardtail, it is a tough track to master. After the practice session on Thursday there was the opening ceremony in the centre of Jablonec town with the mayor giving out the number plates to the top ranked riders, along with interviews with them all in front of huge crowds. The atmosphere and expectation for the race was already bubbling with the locals, and it was great to see the whole city getting behind the event. Friday rolled around and it was qualifying day. The weather was hot and sunny. Within the first few minutes, the riders were flying through the air and getting the huge doubles dialled. The track was perfect and the scene was set.

In the women's qualifying it was Helene Fruhwirth who set the fastest time ahead of Natalia Piwowarczyk and Katarina Brauer. Helene made no mistakes on her way to maximum qualifying points and the important number 1 plate for Saturday's racing. Next up it was the men. Running in reverse order to the UCI World rankings, the fastest riders qualified at the end. As each rider left the start, the times were getting quicker and quicker by the finish line. Blake Nielson was the first rider to lay down a time that looked like it could be the quickest time. The Australian rider looked fast all week and his run was solid. Stanislav Sehnal then went quickest. The Czech rider looked faultless in his run but was it going to be quick enough? The answer, possibly unsurprisingly, came with the last rider on course. Tomas Slavik built the track, runs this race, and in all honesty, simply looked faster than anyone else. Taking the fastest time to the roars of the home crowd. Ondra Stepanek took 2nd and Quentin Derbier in 3rd.

Onto race day. The crowds turned up in their thousands. At an estimate there were 7,000 passionate Czech 4X fans all with air horns, flags and whistles. There was a true party atmosphere and this was going to be a fantastic night of action. They we looking for hometown hero Tomas Slavik to take the victory, but would it be his night? First up, the top riders were introduced to the crowds. Fire, smoke and each rider's choice of music introduced them to the huge crowds. Then the Red Bull Flying Bulls took centre stage. Three Red Bull Air Race planes flew just 50 metres above the crowd doing loops, stalls and fly-bys. It was truly awesome. 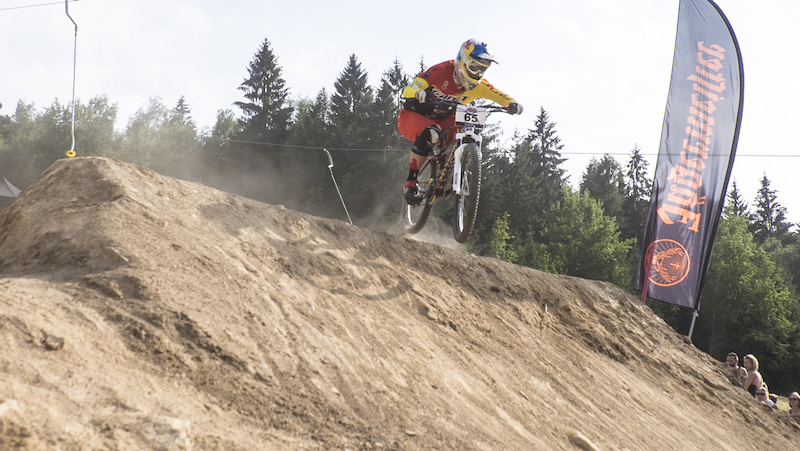 Onto the racing. Big names out in Round 1 were Jaroslav Faistaver, Cedrick Lorens and Ingo Scheck. In the quarter finals, Simon Waldburger - currently 4th overall in the overall points went out along with Hynek Strouha - the local rider who made the final here for the past 2 years. The track was definitely causing some upsets.

In semi final 1, there was action all the way to the finish line. Tomas Slavik and Hannes Slavik were out front and looking good. Tomas pulled a good lead but Hannes started to slow a bit. In 3rd place was Dave Roberts and with some of the best riding we saw all night, Dave carried amazing speed through the last turns and grabbed his first ever spot in the final across the finish line.

In semi final 2, it was Quentin Derbier and Blake Nielson who looked to be going to the final. On the wall ride though all hell broke loose. A puncture for Blake saw him crash on the landing and keeping a cool head Alex Metcalfe rode into 2nd to book a place in his first ever 4X ProTour final.

So the first final up were the women. In the small final it was Eva Brauer who took the win from Michaela Berakova to book the final spot on the podium. In the main final Helene Fruhwirth made a great start and did not look back. Riding smooth and pulling a good lead on Simone Jirkova. A great comeback by Natalia Piwowarczyk after a huge bobble on the first step up nearly caused her to crash. Olga Romzaikina from Russia rode great in her first ever ProTour to finish 4th. Helene took the win and with it retained the overall series lead.

In the men's small final, Blake Nielson got the snap and won the race from start to finish. Taking the win and with it the final step on the podium, this was Blake's first ever podium at ProTour and just rewards for him after what has been a terrible couple of years plagued by injury. Nice work Blake.

Onto the main final. Tomas Slavik took gate 1, Derbier in 2, Dave Roberts in 3 and Alex Metcalfe in 4. The gate dropped and it was Slavik and Derbier battling into turn 1. Slavik was leading down the second straight with Derbier drifting a little wide looking for space. Through the woods Roberts started to charge on his enduro bike flying through the woods he moved into 3rd relegating Metcalfe to 4th at the hip jump. Slavik was flying and extending his lead. Across the finish it was Slavik ahead of Derbier, Roberts and Metcalfe. 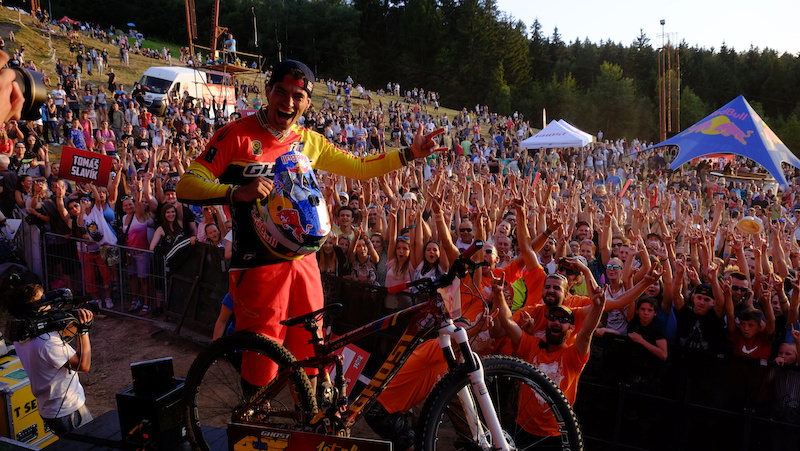 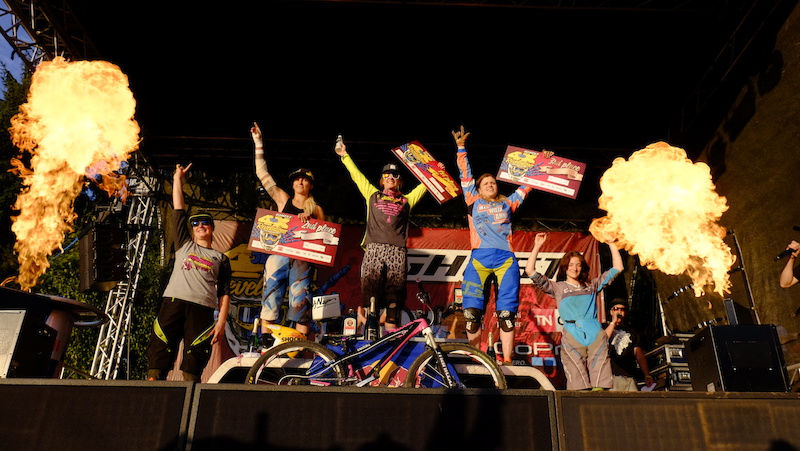 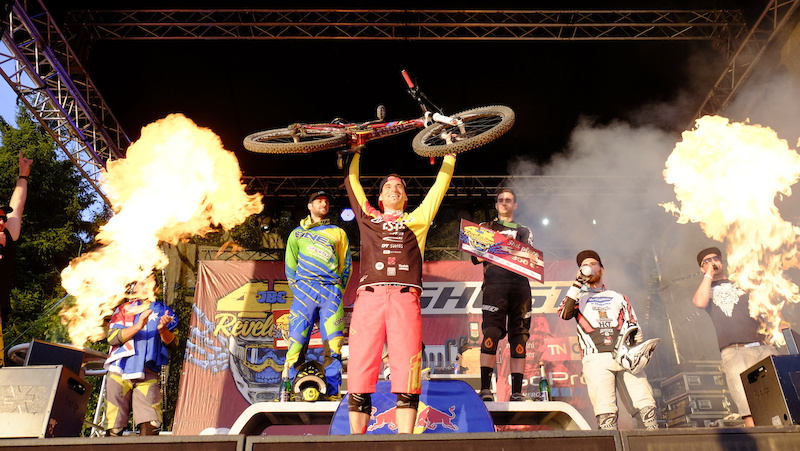 After huge podium celebrations, the Jagermeister guys took control and the after party began. With dj's, bands and thousands of happy Czech fans, this race was the perfect showcase for 4X ProTour, the sport of 4X and all the riders.

Thanks to the world's MTB media who supported this event, the live webcasts, the fans in Jablonec, the riders, the sponsors for this race and most of all Tomas Slavik and his crew for working tirelessly on this project and showcasing to the world that 4X is amazing.

The final round of 4X ProTour is on Saturday September 5th, at Malmedy, in Belgium. The overall title is still very much up for grabs as we expect Scott Beaumont to return from injury to battle with Quentin Derbier, Hannes Slavik and Simon Waldburger. It's going to come down to the wire and you won't want to miss it.

davemays (Jul 30, 2015 at 8:50)
I think 4X would be such a good fit for the Olympics. People already love the boarder-cross snowboard format. Though summer Olympic cities aren't expected to have mountainous terrain like the winter Olympic areas obviously have to.

larsveenstra (Aug 1, 2015 at 5:52)
Agree! You don't need big mountains either, the vertical drop on this track was only around 150 meters I guess

Ruffletron (Jul 30, 2015 at 7:22)
Man, that was genuinely AWESOME!!! I never followed 4cross; Judging by the tracks i've seen in the uk thought it was basically big smooth BMX tracks. This is way more technical and interesting!

Excellent highlights edit, i'm definitely going to start following it if the rest of the races and coverage are like this

Joebohobo (Jul 30, 2015 at 10:35)
You must have only seen a couple in the UK. Google Afan and Falmouth, both are incredibly rough and a bmx wouldn't even be able to get down it, let alone race it

Ruffletron (Jul 30, 2015 at 14:43)
You're right, I've only seen the tracks at Aston hill, leamington spa and chicksands. I checked out the previous 3 pro rounds this year, this discipline looks sick!

singletrack29er (Jul 30, 2015 at 3:42)
Anytime I click on the 4x highlights, I just expect to see that Slavic will win... he seems to dominate everyone in this discipline right now!

singletrack29er (Jul 30, 2015 at 8:10)
I realize he has been out for the first few stops but if you remember last year, and when you watch this final highlight... when he is there he always seems to be unstoppable

Chris-GER (Jul 30, 2015 at 6:06)
Ghost has another highlight video on their fb: www.facebook.com/ghostbikesgmbh

aljoburr Plus (Jul 30, 2015 at 5:13)
What an AMAZING track pity the coverage was not as good, what was the problem with live feed?

Allaboutthehardtails (Jul 30, 2015 at 15:04)
Man I got to get myself to Czech Republic just for the parties
Post a Comment