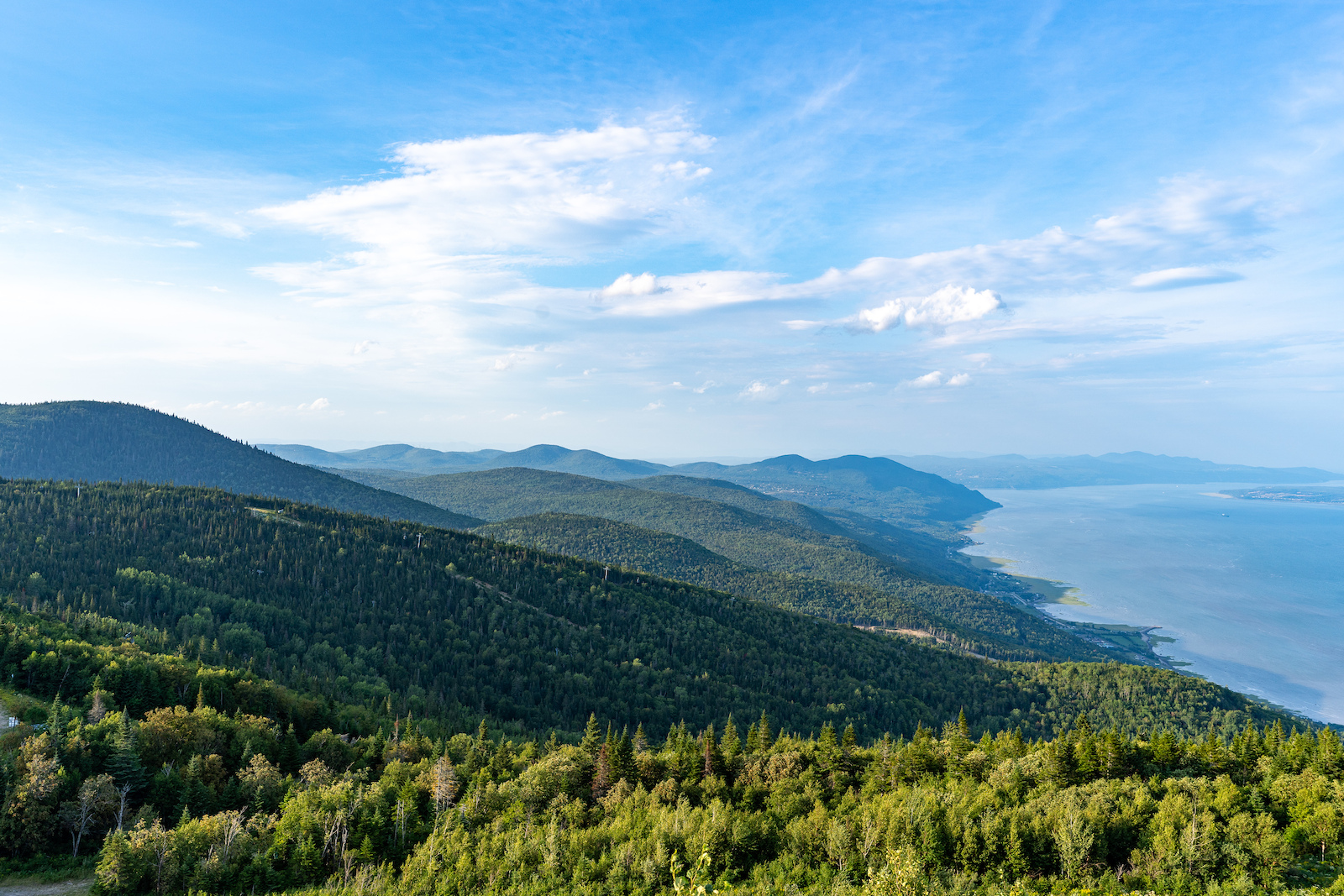 
Just over an hour east of Quebec City lies Le Massif de Charlevoix - Quebec's newest lift-accessed bike park. With 800m of elevation to play with, Le Massif de Charlevoix already has a strong baseline of trails but they have big plans to double what's on tap for next year. Christina already had the pleasure of sampling some of the goods last fall, but this time brought Jason along to show him around. Follow the two as they make their way down Le Massif's network blind. 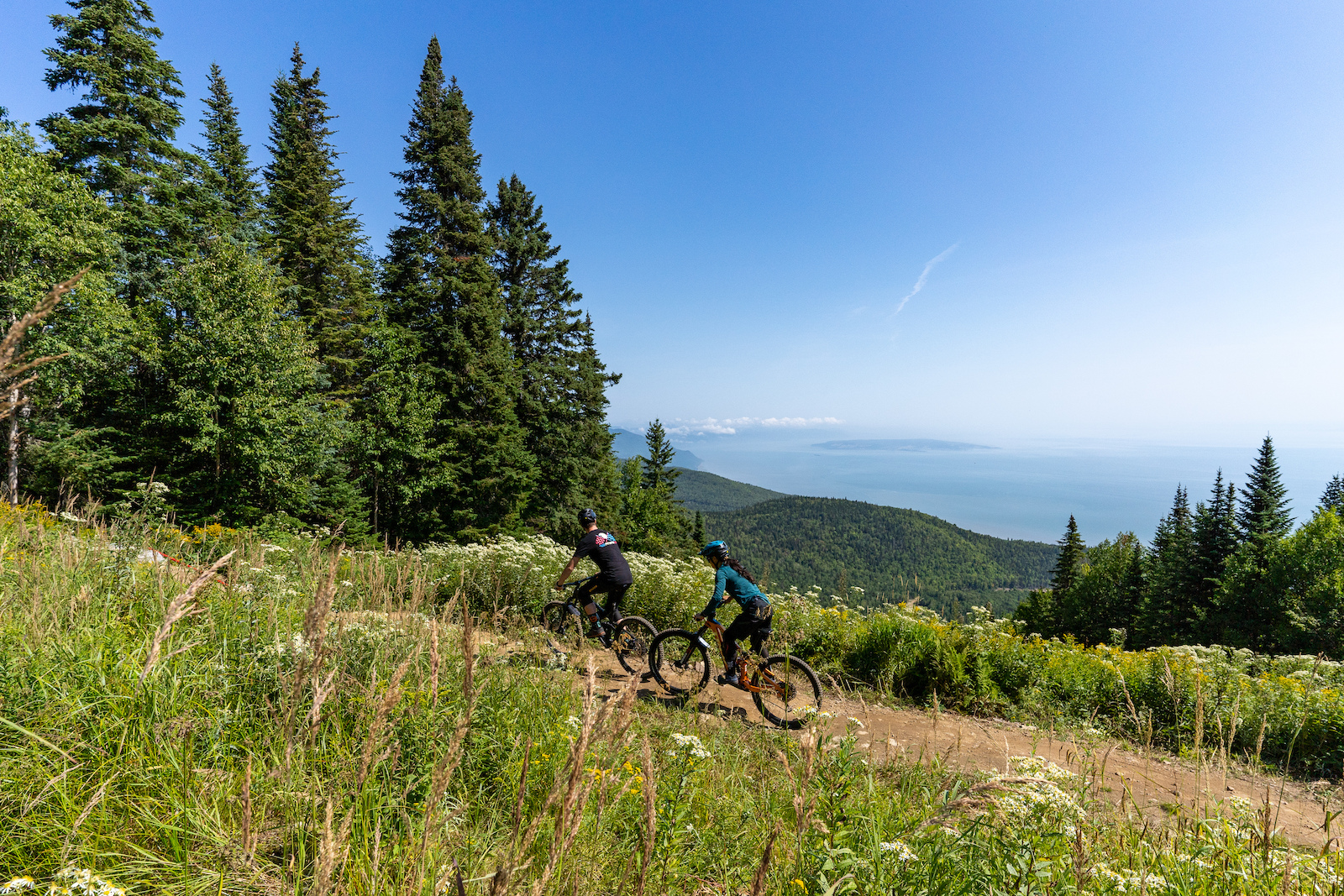 No shortage of views on the way up Bus Jaune. 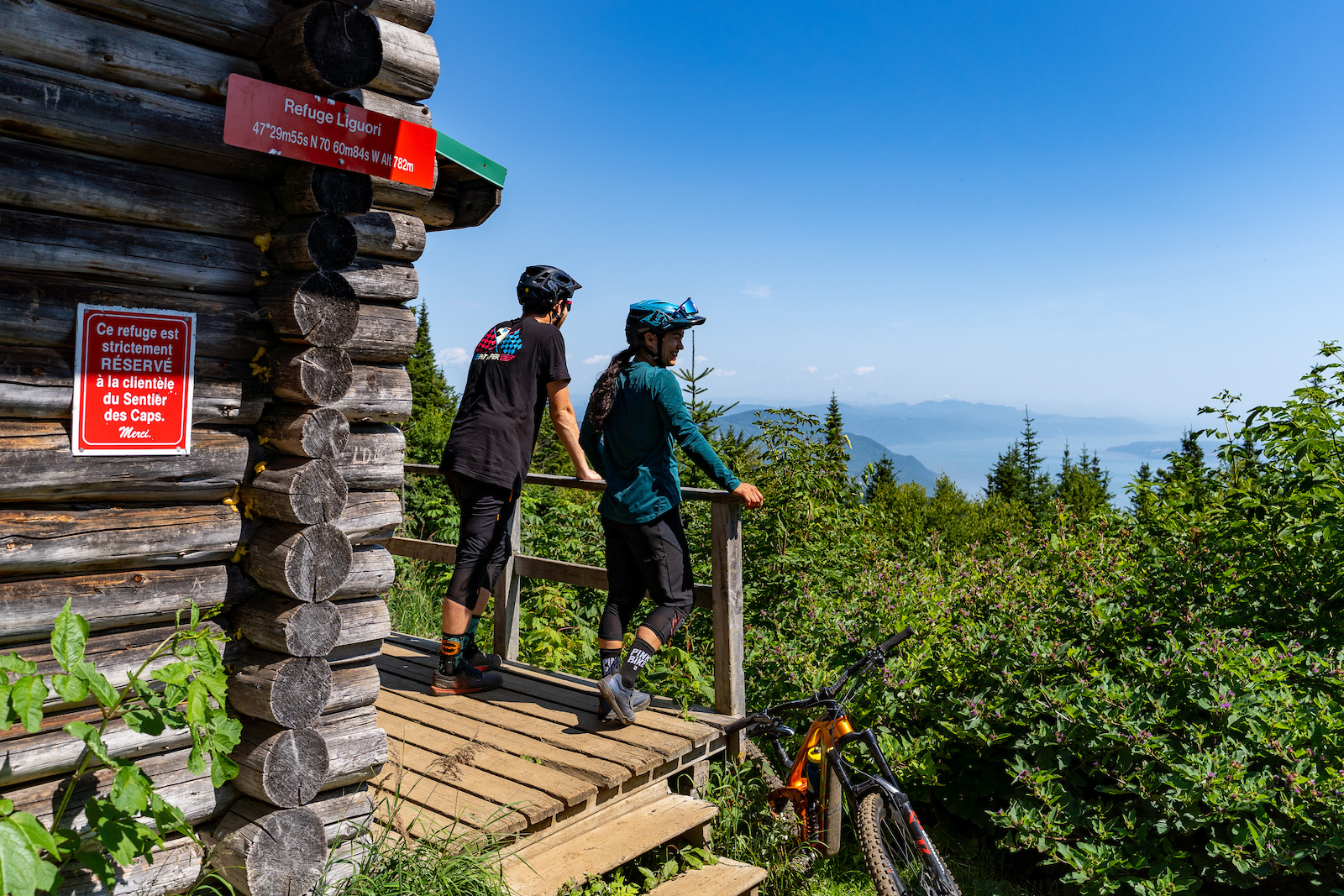 Sometimes you just need to stop and soak it all in... before dropping in. 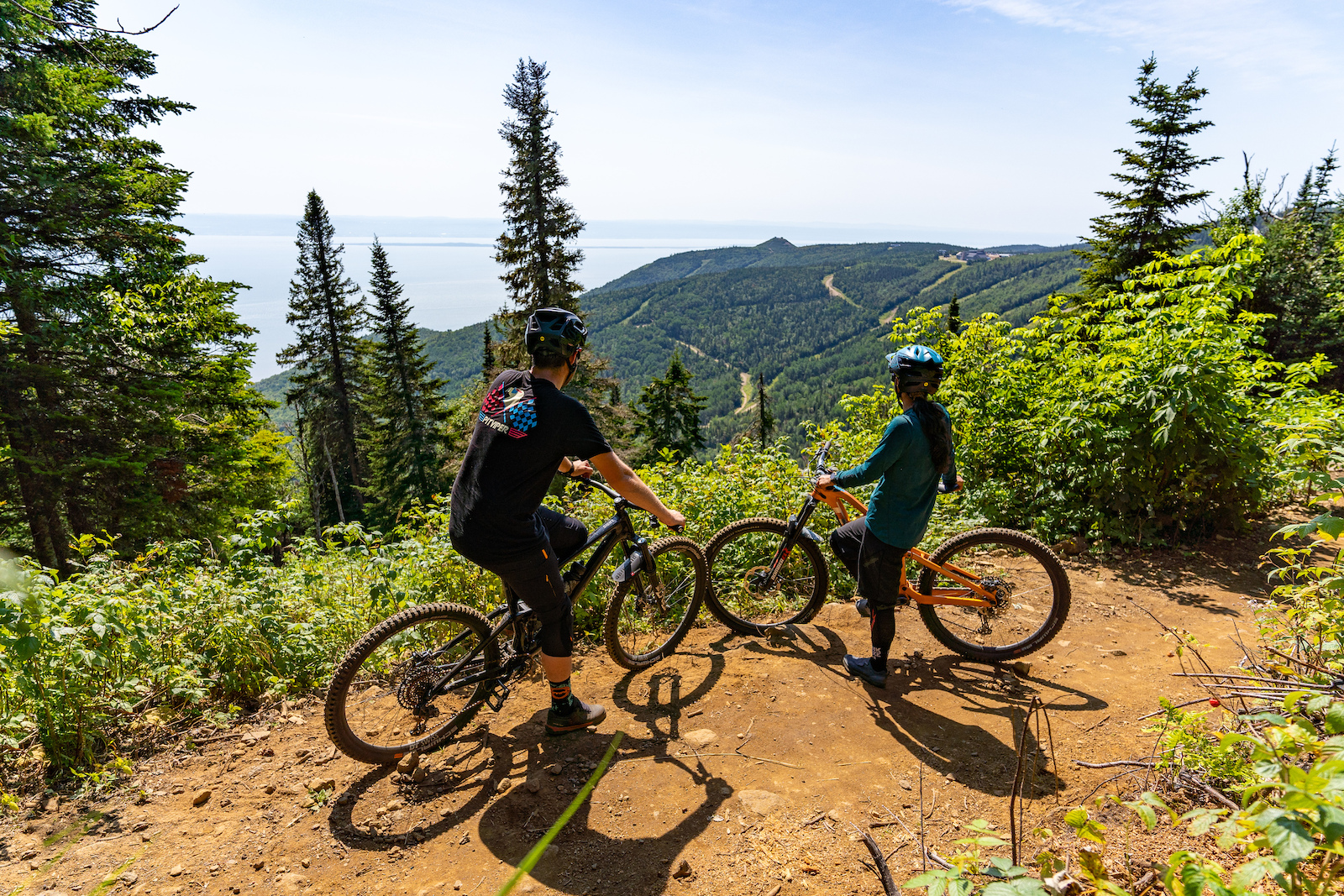 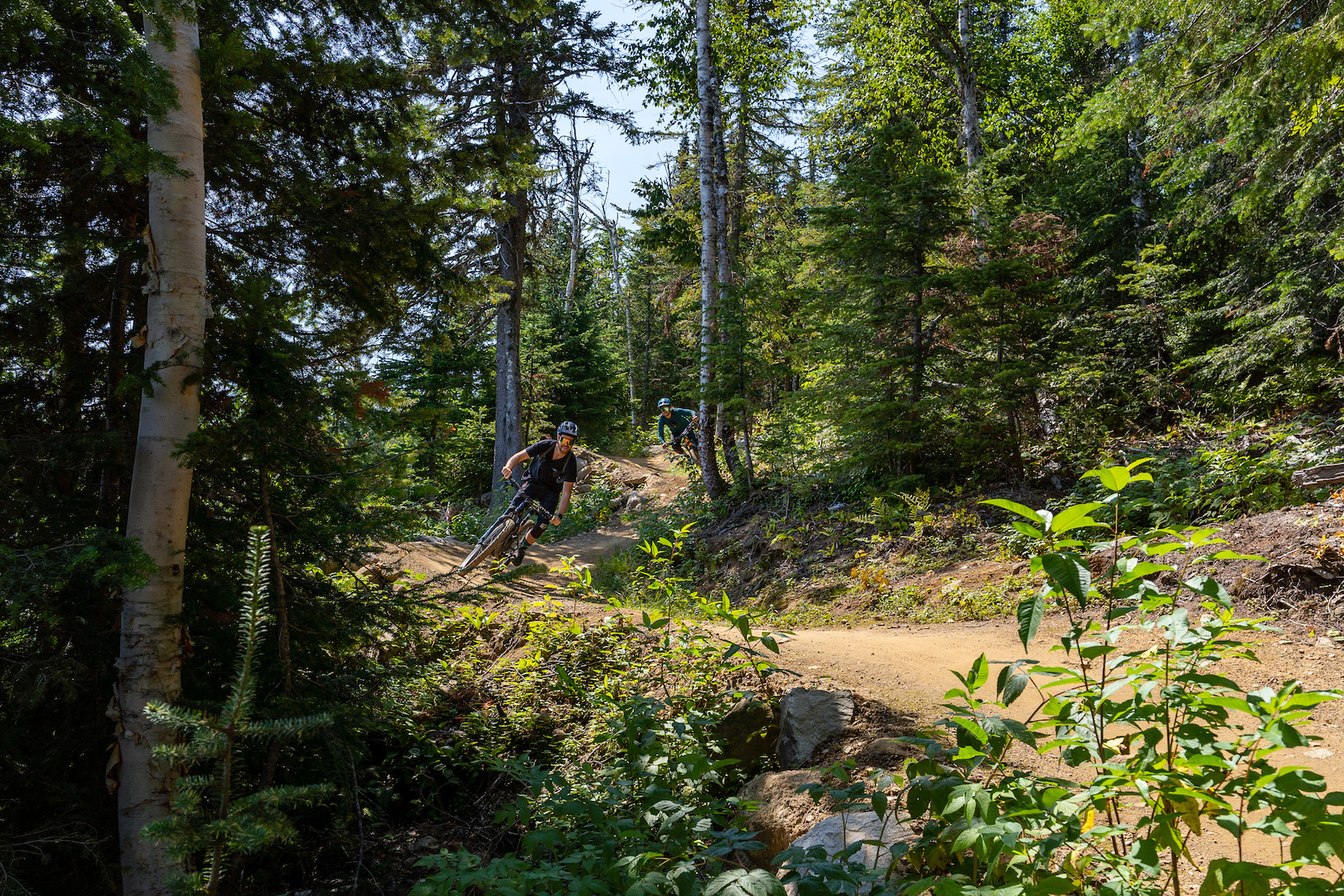 Histoire Sans Fin or The Neverending Story is the best bang for your buck on the mountain. With endless corners, rollers, and flow this one is a must-hit. 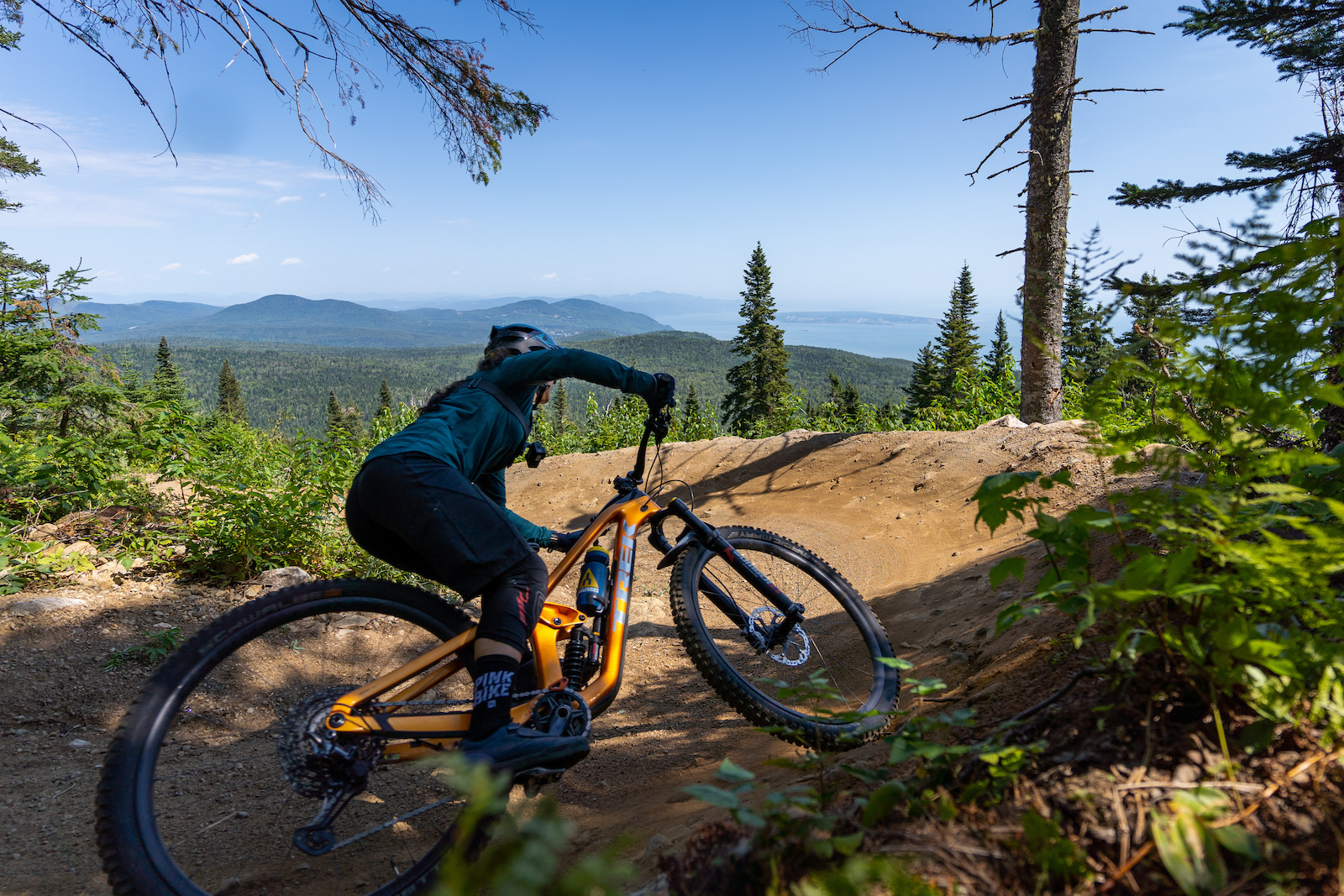 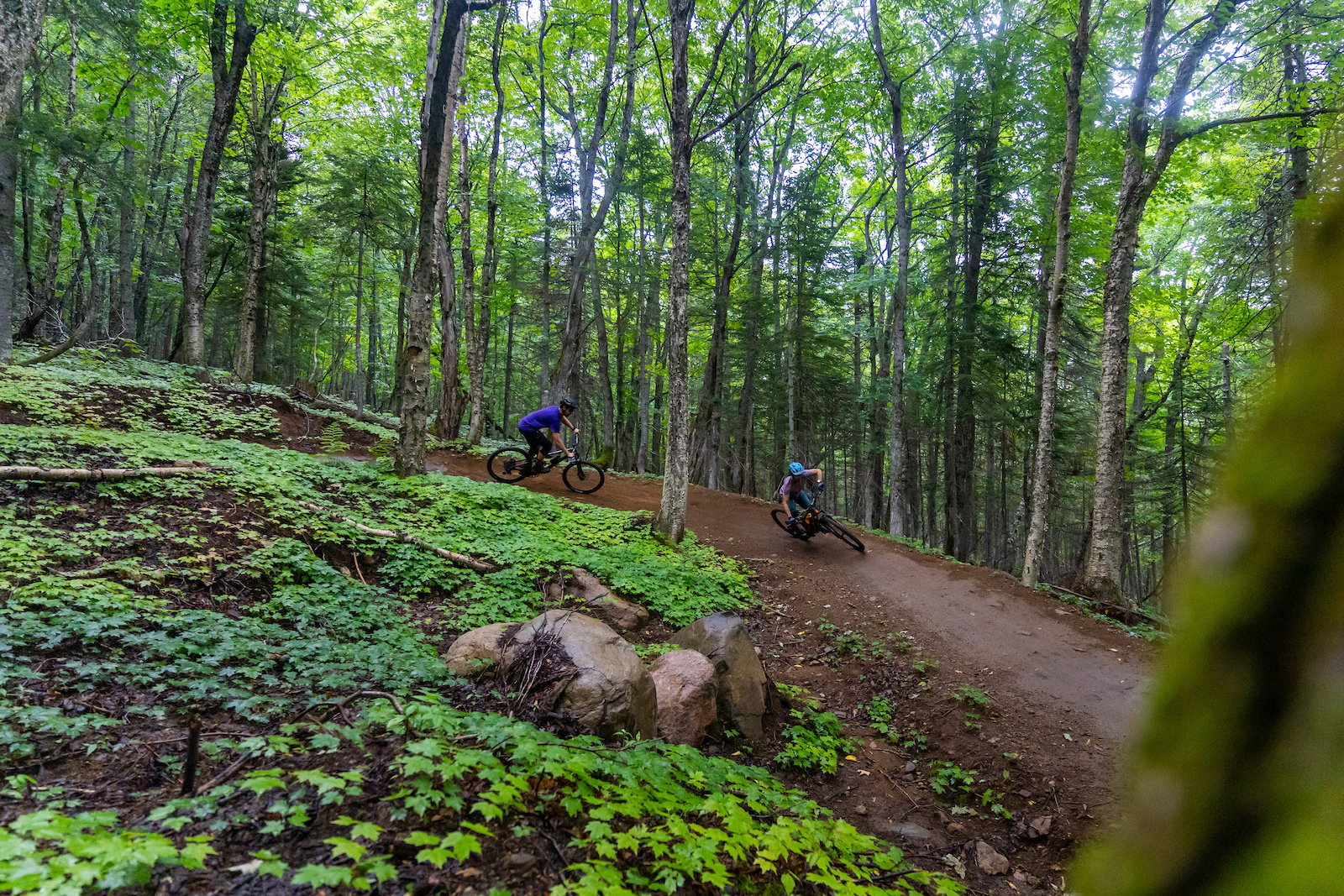 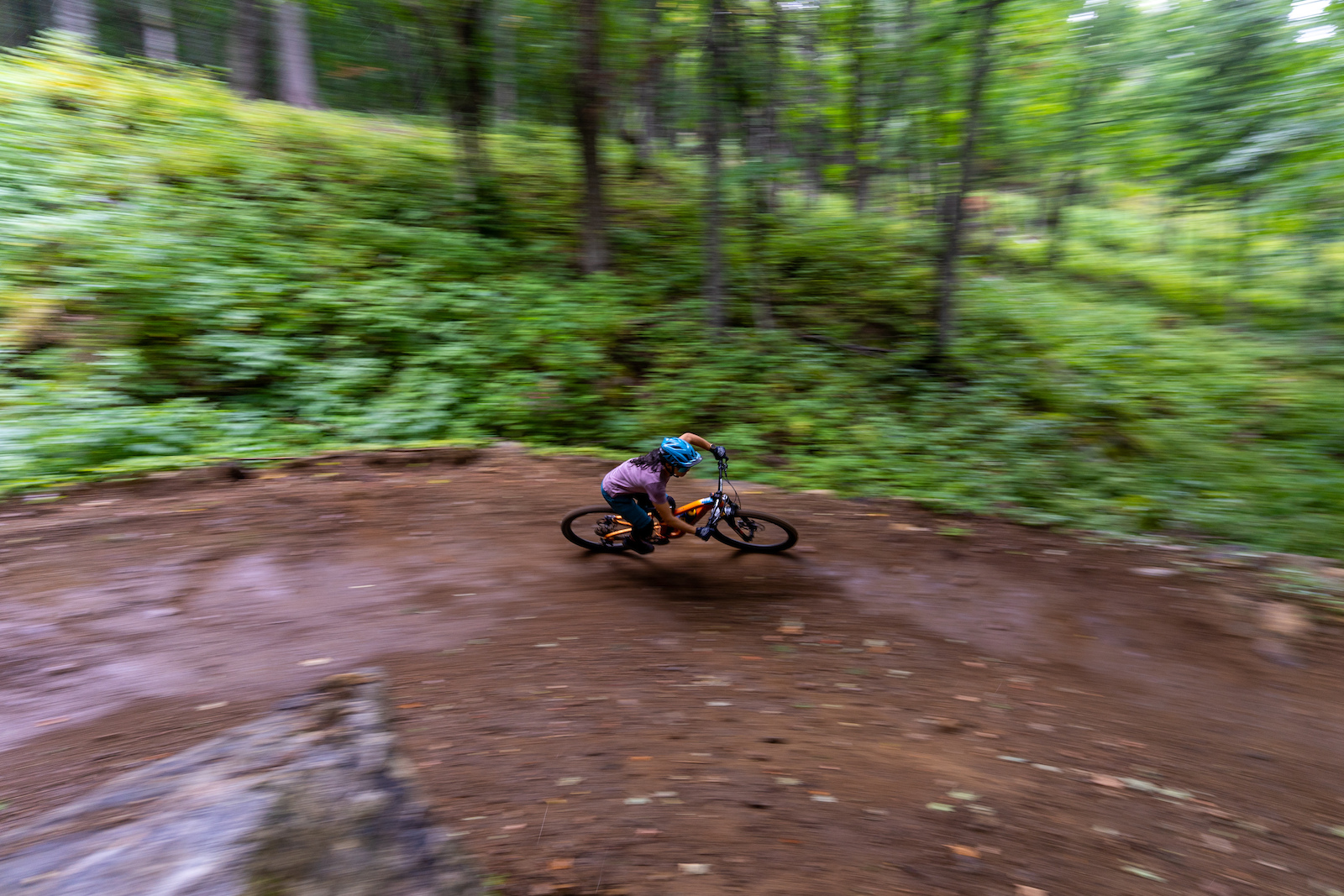 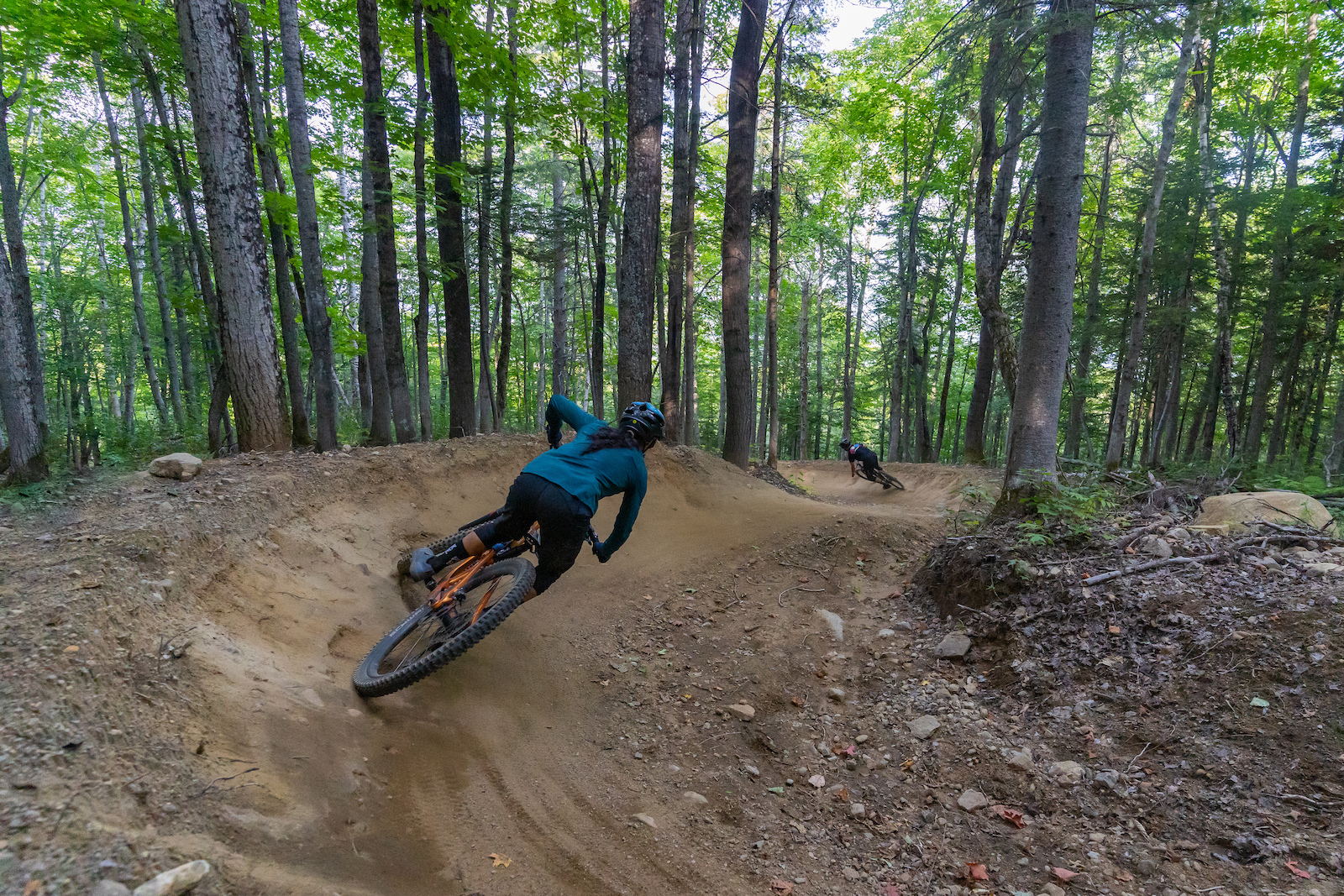 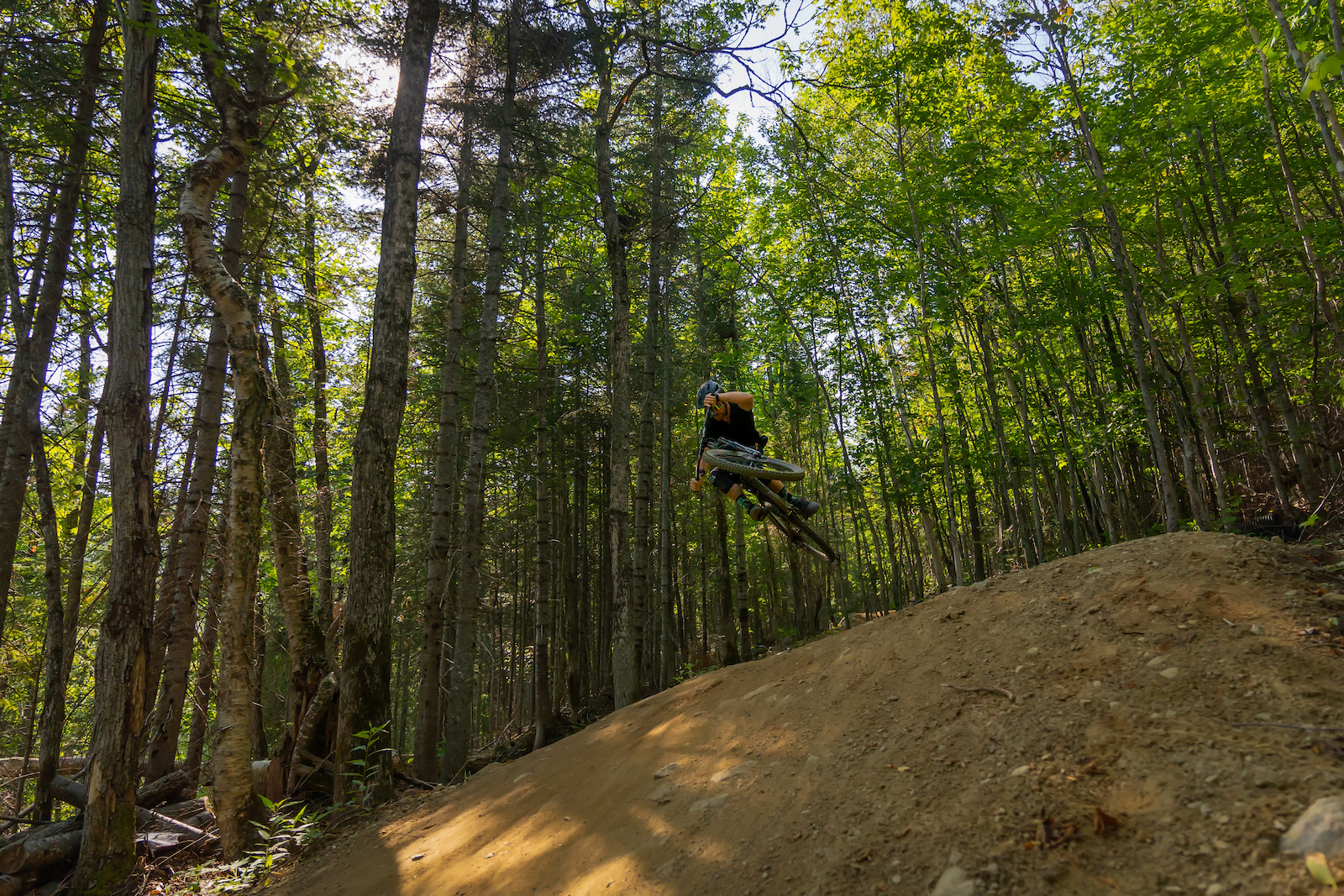 Once you're warmed up, Whipette is a great trail to get a bit more airtime with larger jumps and rollers. 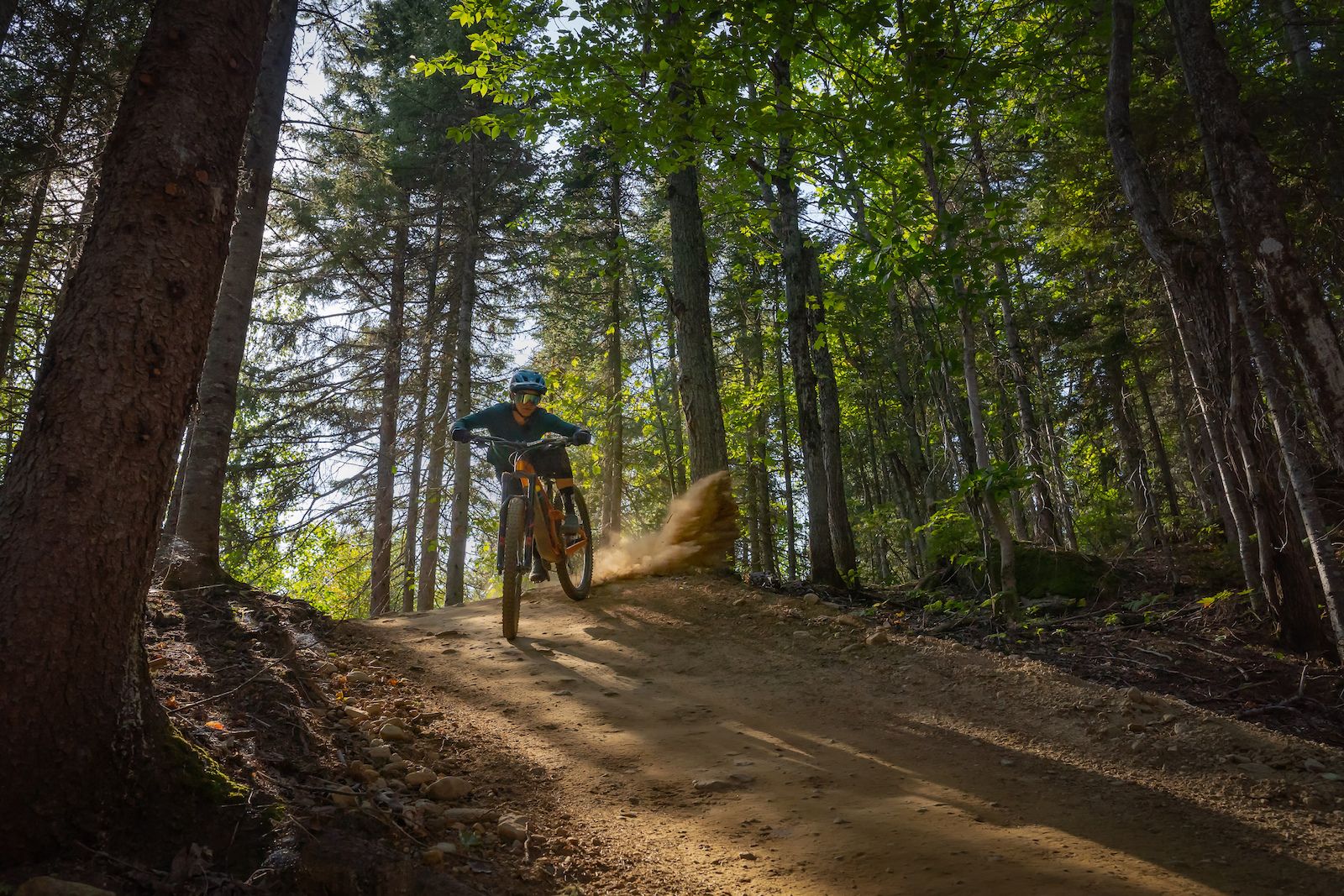 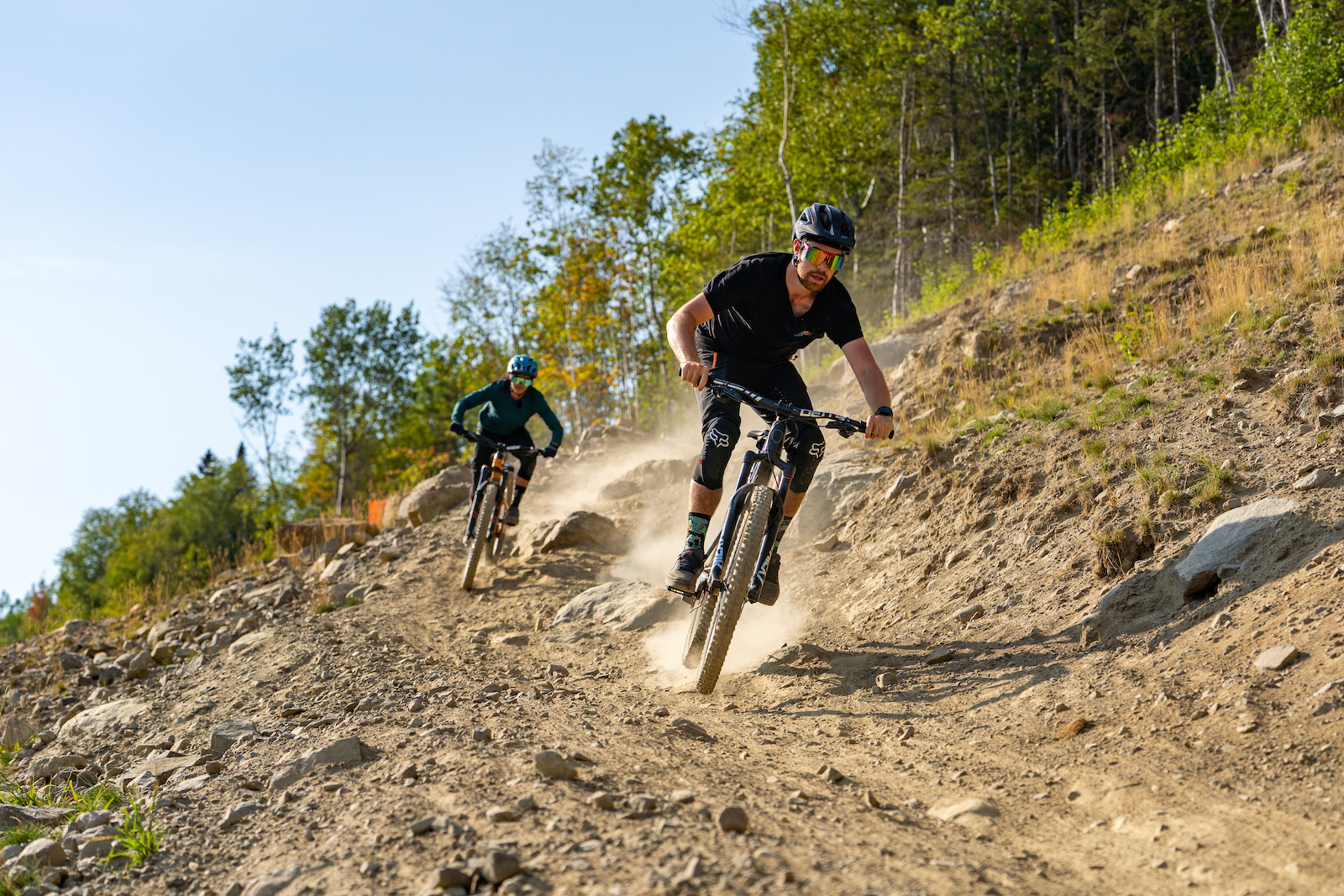 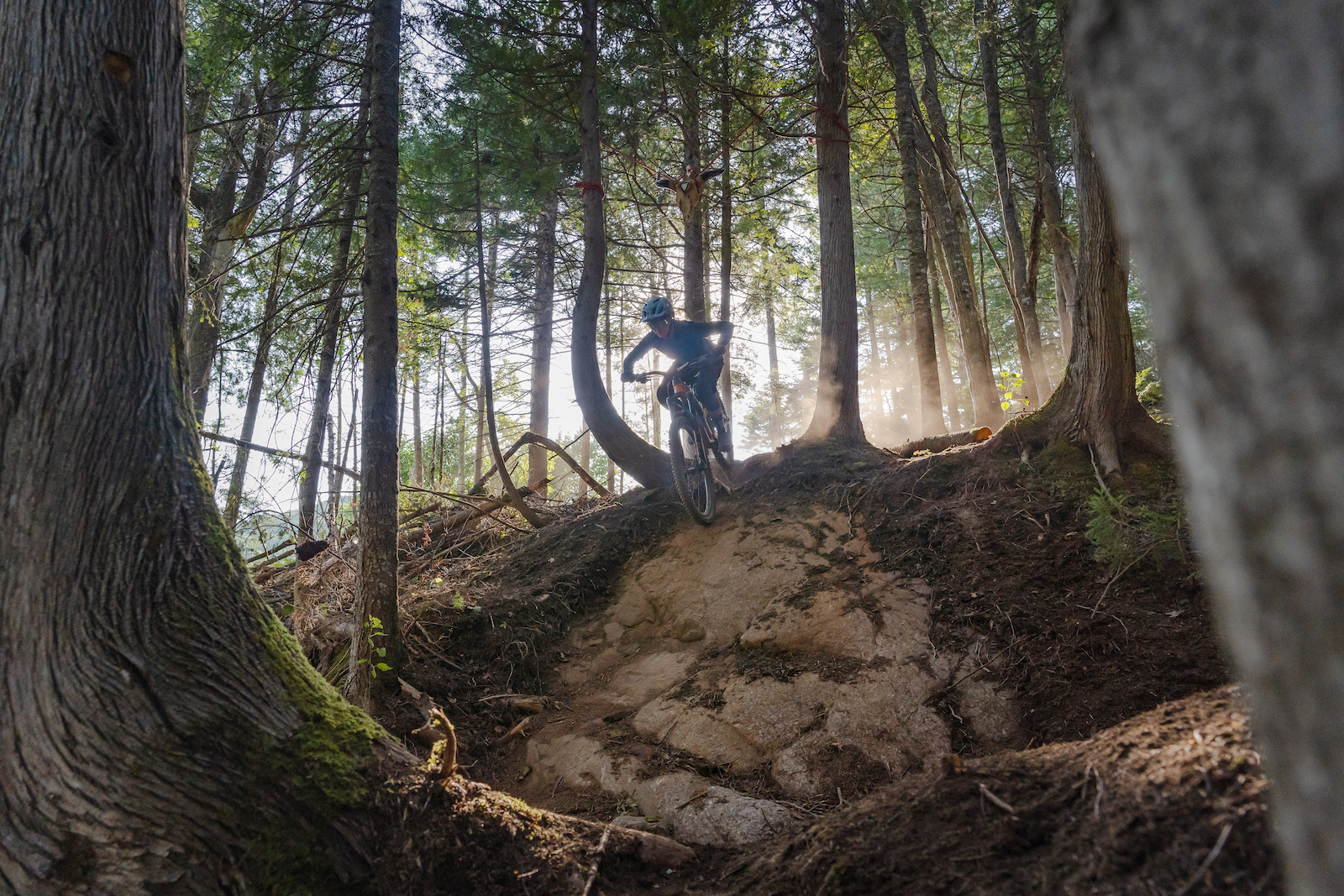 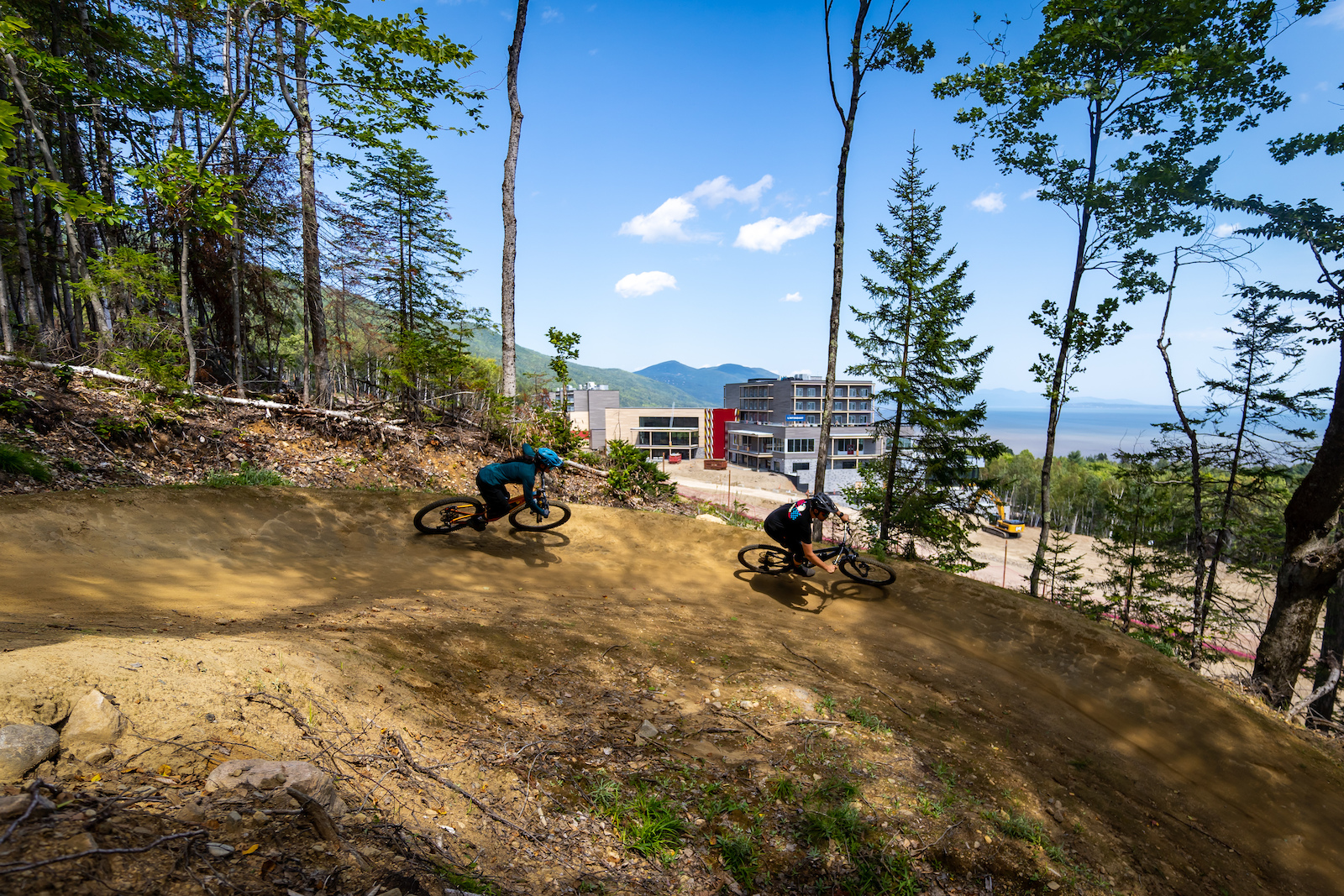 Basilic, which is essentially a downhill pumptrack, is an insanely fun way to end a lap. In the distance, you can see the under construction Club Med which will be completed this year. 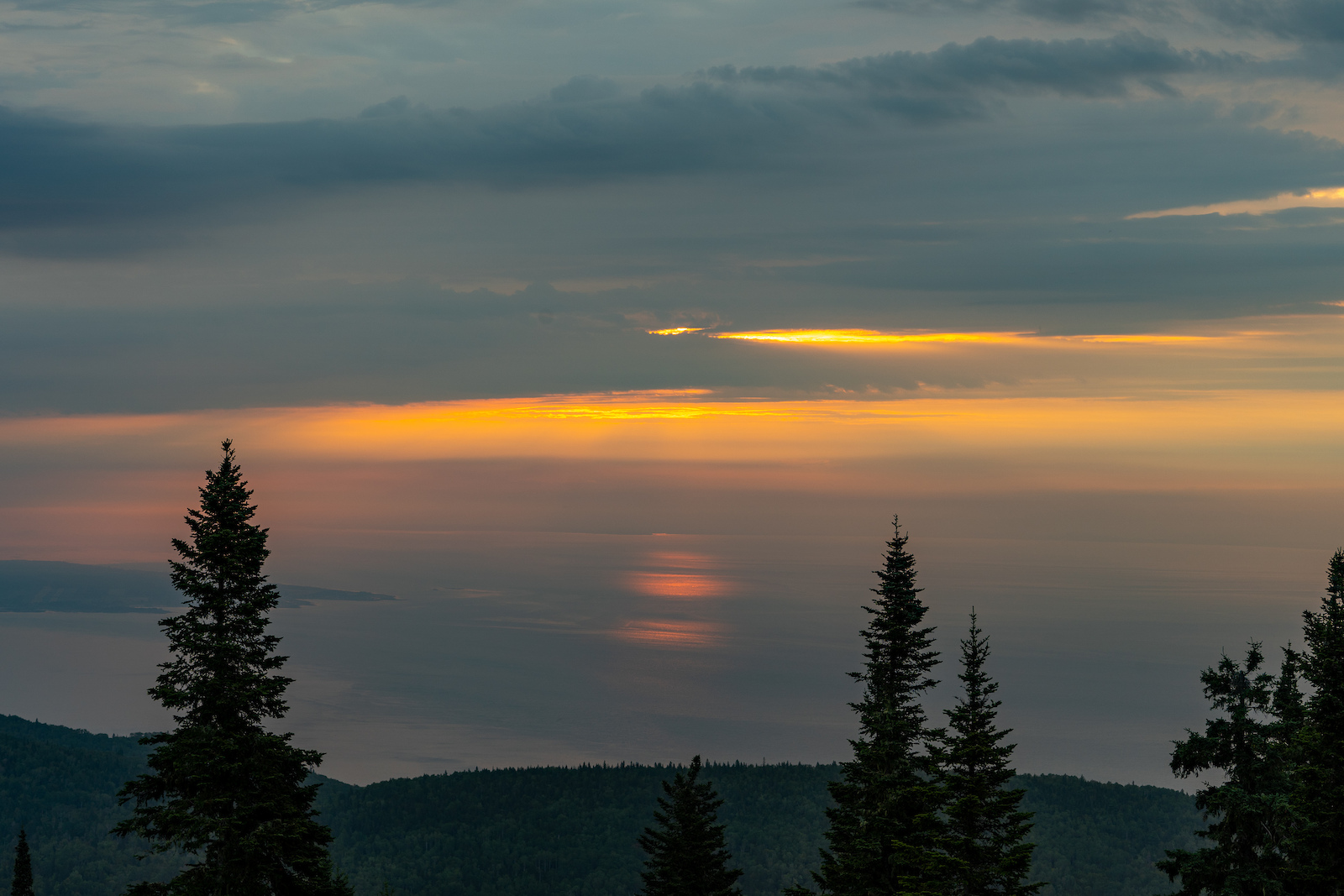 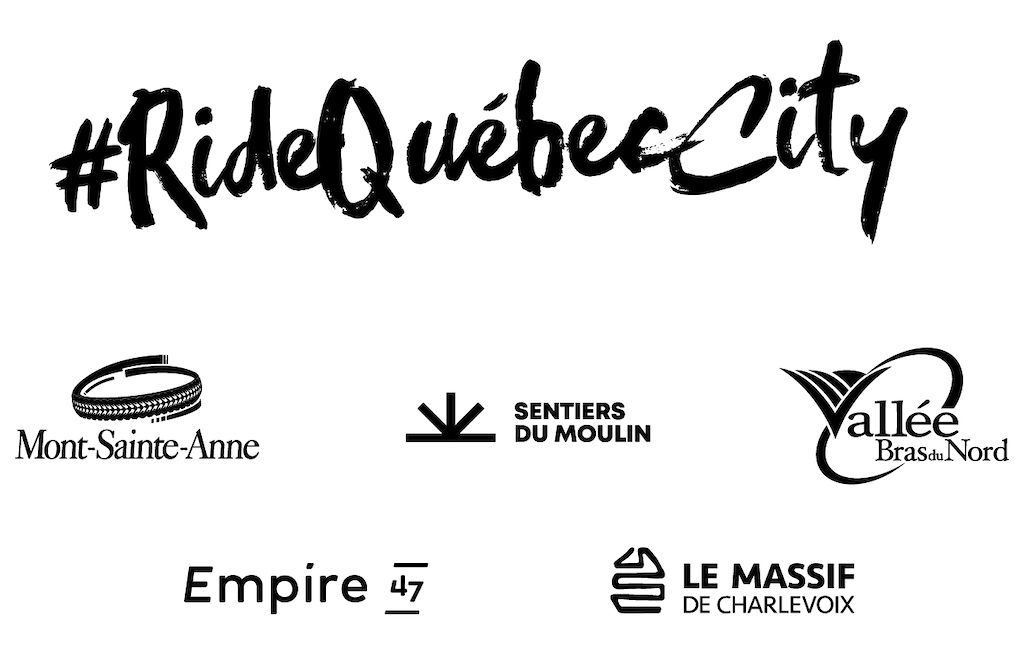 Canadmos (Sep 14, 2021 at 7:20)
It'll be interesting to see what they add in the upcoming seasons. I'm hoping for more natural stuff in the trees; most of what is there right now was clearly machine built. And hopefully they get some rain - I visited a few weeks ago and it was a massif dust bowl with holes and braking bumps the entire way down.

But its definitely a very cool spot and something different from MSA!

bishopsmike (Sep 14, 2021 at 7:43)
Honestly the Quebec City area is getting a regional network to rival any destination location:

Not to mention the huge number of small/medium sized places like Mont SM, etc.! And 2 hours down the road is Bromont, Sutton, St-Sauveur... etc. It's MadNeSS!!

pirati (Sep 14, 2021 at 7:55)
@bishopsmike: absolutely agree. Having lived in Quebec region and close to BC's North Shore, would say that Quebec region is at least as attractive as BC, but in different ways.

Canadmos (Sep 14, 2021 at 8:32)
@pirati: Yeah agreed, Quebec has so many good biking options. And while the mountains aren't the Rockies, there is still quite a bit of elevation and an excellent variety of terrain.

The only downside to riding in Quebec I find, is that almost everywhere has a trail fee of some sort. BUT, the trails are almost always worth that cost as they are built well, with good facilities etc etc.

christinachappetta (Sep 14, 2021 at 8:38)
It was really rad to ride the newest trail, Gros Boef, because it was quite different that the rest of the trails. Much techier with some rock slabs as well. Goes to show they are keen to keep investing and growing the trail network. We lucked out with a rain shower one day and that made the dirt pretty perfect.

shredddr (Sep 14, 2021 at 8:45)
Great to see this develop - buddy of mine from Montreal swears by the skiing there - I guess they get a decent amount of snow and it can be very good.

shawn-in-action (Sep 14, 2021 at 12:25)
@bishopsmike: Very envious of what Quebec City locals have to work with ! The trail building in the area is on a whole different level !! Can't wait to make a visit some day down the road!

hg604 (Sep 14, 2021 at 12:30)
@Canadmos: I was there a month or so ago as well, have the same thoughts as you. There is SO much potential at Massif, they have a lot of vert, really good gradient for a bike park, and clearly they are investing in making it happen. The first few blue flow trails are fun but not really super interesting for advanced riders, however they have so much space there and such cool natural terrain that I could easily see it becoming a legit world class bike park within a couple of years.

I also actually encourage the trail fees - places like SdM are amazing, and I like that they have paid trailbuilders to do maintenance. Having seen a number of places around the world where a bunch of money is invested (often by local governments) to build trails then the location never gets funding again, it often ends up with a ton of totally shitkicked, poorly maintained trails. BC seems to have done well with local clubs managing it, but it's usually still some unpaid volunteers building it. No dig, no ride etc fair enough, but many people are busy enough that getting out for a ride is an achievement in itself, and would rather just pay someone else to do the digging.

christinachappetta (Sep 15, 2021 at 16:33)
I love them so much haha possibly my most beloved piece of kit, glasses that actually keep dirt out of my eyes

pierre22 (Sep 14, 2021 at 9:10)
To anyone riding the east side of the North America, this place is a must. Granted, there's not a ton of technical trails and double blacks, but it’s an absolute pleasure to go down a hill at Max speed for 25 minutes. And there is enough variety to make it a really fun day... Bonus! It's actually super affordable, the staff is nice and the chairlifts are fast! A little personal recommendation, if you plan on riding le Massif, check out the little down at the bottom of the hill called Petite-Rivière-Saint-François right on the Saint-Lawrence. (you need good brakes on your vehicle, that hill is long and steep) There’s a camping/ coop called Coopérative de solidarité l’Affluent www.laffluent.com. Super cool spot to stay at on your trip. Enjoy the East mes amis... and don't fear the French

mxnate (Sep 14, 2021 at 13:44)
Man.... honestly didn't think I could hate Ontario anymore than I do and then Quebec adds another lift access park. I need to reevaluate my entire life.

Thanks for showcasing the region and kudos on the enjoyable video.

christinachappetta (Sep 15, 2021 at 16:34)
Thanks so much and it was lovely to meet you, as well as so many other riders, while we were visiting.

preridedump (Sep 14, 2021 at 7:52)
With all the posts lately showing these incredible rigs allowing paralyzed riders to ride again I read this caption and was ready to have my mind blown. Cool bike park tho.

pink505 (Sep 14, 2021 at 8:33)
Please get Ben, Tom and Jason to read out the french trail names after a few beers and post. It was Like you where speaking gibberish Jason, A for effort, gave me a good laugh. The trails suck in the east...and we aren't enduro bro...don't come here.

ybsurf (Sep 14, 2021 at 10:23)
We beileve you, dont get me wrong I'm sure theres fun trail in your area but it's still far from a "bike destination" like BC/pnw. Dont need to play that localism game.

pink505 (Sep 14, 2021 at 10:55)
@ybsurf: I forgot to mention the biting insects: May blackflies, june mosquitos and july august deer flies. They are so big they can actually pull off wearing Pit Viper shades. This a "bug destination" not a " bike destination"

jrouellet (Sep 14, 2021 at 9:54)
Christina is a wizard! How did she save herself from those crashes? It's unblievable to me! Also , did you see those cornering shot?! They look great!

rocksandrocks (Sep 14, 2021 at 10:10)
Great to see Quebec’s investment in riding. I’d love to see a little more information on best places to stay etc. It’s a 10 hour drive from Toronto, so we would need to stay and make a trip of it.

christinachappetta (Sep 15, 2021 at 16:36)
Glad you enjoyed the video! We did a fun trip last fall and rode loads of spots. Worth the trip. Link here to get some inspiration on places to stay www.pinkbike.com/news/destination-showcase-ride-quebec-city-part-1-portneuf.html

Smith22 (Sep 14, 2021 at 15:07)
I live in Toronto,Onterrible. Sucks that Blue Mountain permanently closed down their DH trails while seems like everywhere outside of Onterrible are increasing the number of trails & opening new bike parks.

Respect to Horseshoe, appreciate their efforts & I'm glad they are open but its nothing like these other bike parks.

homerjm (Sep 15, 2021 at 23:29)
Looks awesome!I wish We had the chance to get more bike parks/trail centers near Madrid or really any other big city in Spain. Our politicians are years light of Canadians,they only know corruption and how to steal any money it is near their pockets.
Investing in MTB stuff is non existent thing here,Madrid council is a f*cking bad taste joke,like most of them in Spain.
Young people had little or no chance to ride MTB,park,pump track or whatever in a decent well thought place for free.
We had tons of mountains & good bikes,but no chances to build a good bike park.

torontomtb (Sep 14, 2021 at 8:52)
I did a few of these trails during this year's Québec Singletrack Expérience (quebecsingletrack.com). The flow trail is so long and of high quality.

mkpfaff (Sep 14, 2021 at 7:57)
I assumed they were a favorite among Bostonians still rocking mullets.

apokolokyntosis (Sep 14, 2021 at 21:54)
Quebec trail builders: Let's name this trail after a mythology creature, a snake that kills you even if you only look at it!
Christina and Jason: THE BASIL TRAILLLLL!!!!

christinachappetta (Sep 14, 2021 at 8:39)
It looks tropical at times! I couldn't believe we were still in Canada

lloydfletch (Sep 14, 2021 at 14:26)
@christinachappetta: I moved to Montreal from the Uk and have struggled with that. It's like being in the friggin jungle over here.