It seems like everything has been discovered by now, all continents, the oceans, and even space. As a young person, you could get the impression that we arrived a generation too late to discover something truly new. A feeling that must be overcome somehow.

For me, looking for places that have been forgotten by time and give them a new purpose did just that. See something different in them, that others overlooked, something new. Capture their unique beauty for generations to come before those places decay and disappear forever. Join me on my journey around the world, in constant search for new places to discover, ride and document. Catch a small glimpse behind the scenes of how I take my self-portraits and the stories behind the photos. 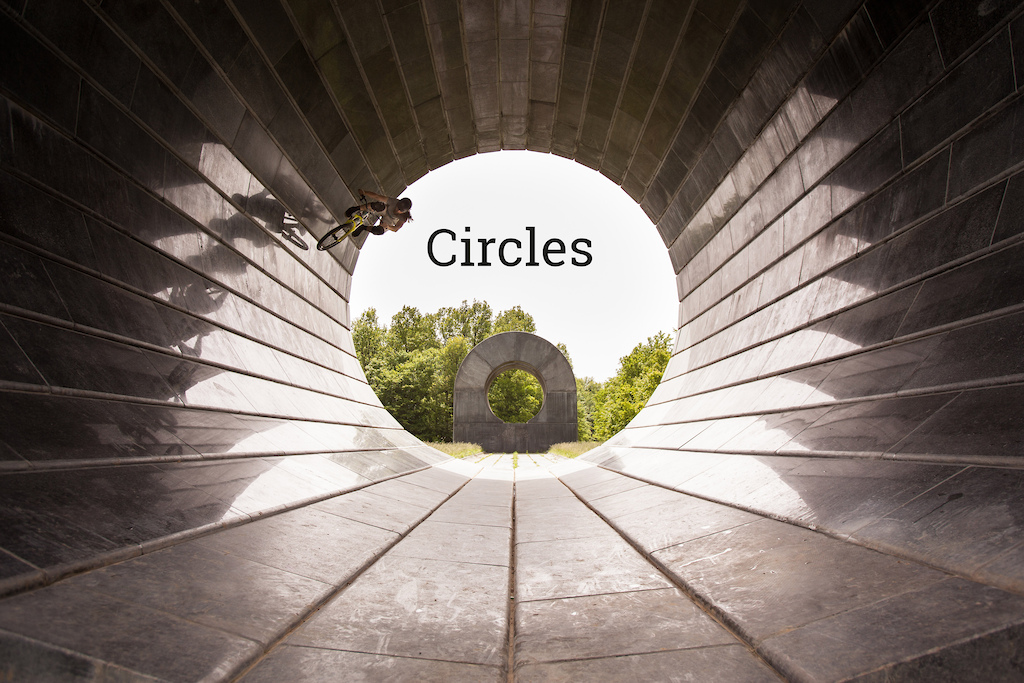 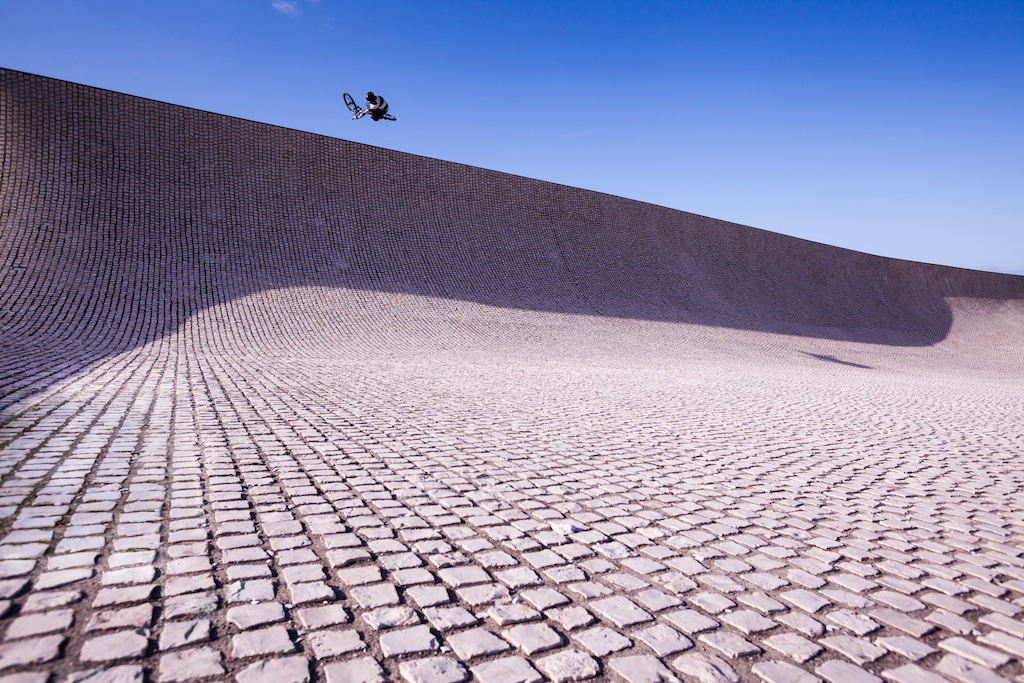 Some spots make you wonder if the architect had this kind of usage in mind when he designed the Building. I read about this place in an architecture magazine in the library of my university and I had to check it out. After visiting my friend and idol Ruben Alcantara in Malaga we stopped by on our way home. Probably one of the scariest spots I have ever ridden. Being close to the ocean, unforeseeable wind gusts were constant The surface was constructed out of very sharp cobblestone that would cut you into pieces if you fall. Worth it though. 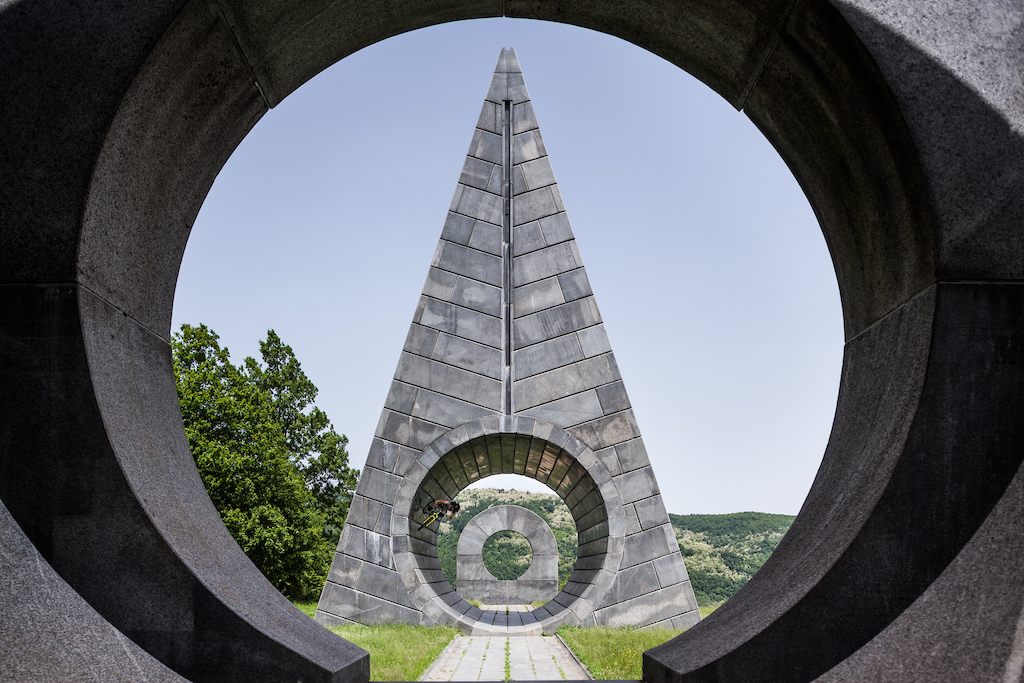 A true once-in-a-lifetime spot that seemed to be straight from another world. Once a place where people would meet, now a deserted landmark in the middle of now where. Before riding it I had to clean up a lot of trash that former visitors had left behind. The carves I took inside this marble full pipe might be the most memorable I ever took. The vertical version of this photo also happened to be my first magazine cover as a rider on a major mountain bike magazine. And it might be the first proper self-portrait on an action sports magazine, ever. 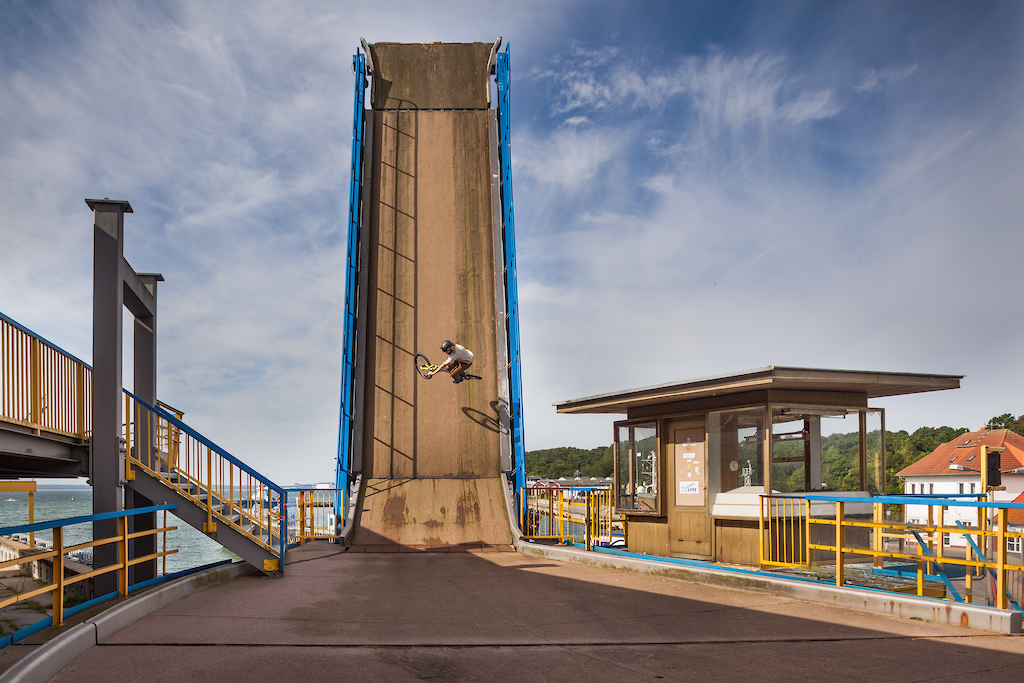 I found this spot on a recent road trip by accident. A huge loading Dock that seemed to be abandoned for quite some years. Broken glass, old pictures, and a lot of rust created quite an interesting contrast to the still bright blue and yellow Colors of the railings. This quite unusual setup and the stormy clouds in the background inspired me to get something good here. The trick itself was quite a challenge on this nearly vertical Dock and it took me at least 15 tries to get the timing just right as I had imagined it in the beginning. 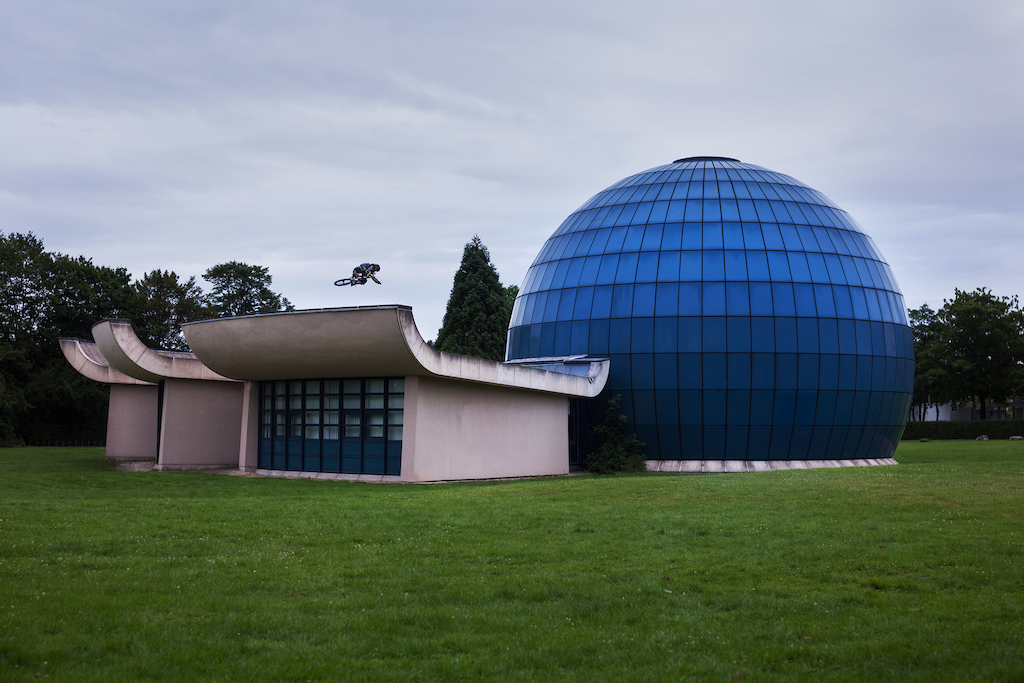 I saw a picture of this building in 2012 and in my head, I instantly saw a rider on top of it. It took me over three years to track down its location and another two years to finally make the trip. The quarter itself was a true challenge like they always are when a spot looks too good to be true. A kinked bumpy run-in, a concrete block on top of the quarter with a lightning rod made it even trickier to ride. But here we are, another fantasy made into reality. self-portrait. 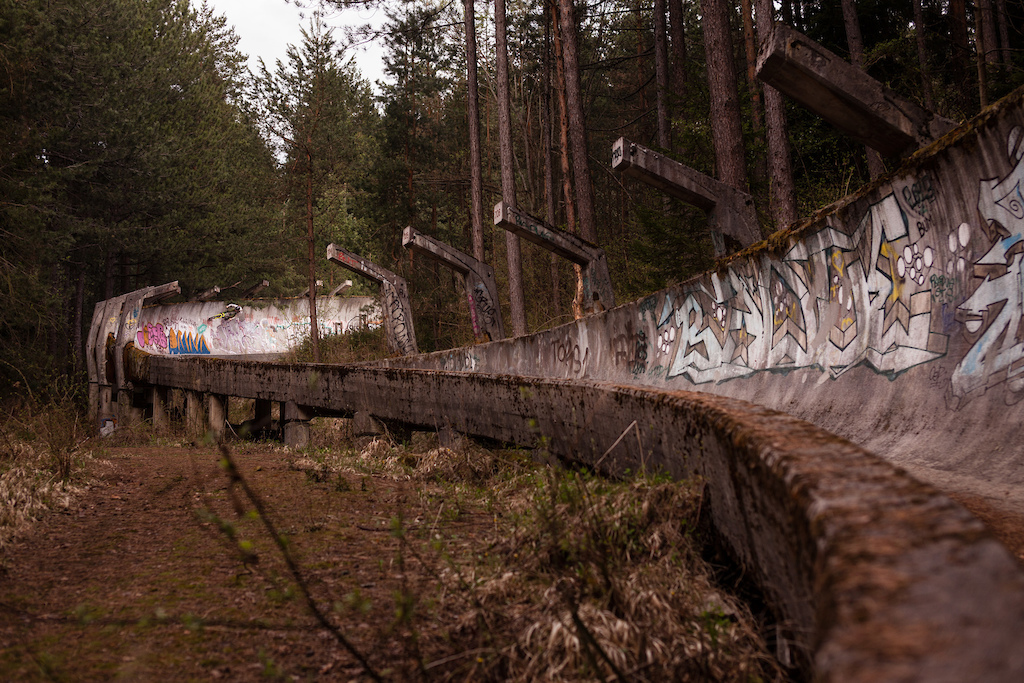 I came across this Bobsled Track close to Sarajevo and could not resist the temptation. It was built for the Olympic games in 1984 and got partly destroyed during the Siege of Sarajevo. Driving through the city of Sarajevo, you will find a lot of houses that are still riddled by bullet holes and explosives shells used during the war. The same goes for the bobsled. The fighting around the city didn't spare the remnants of the Olympic winter games. So if you decide to ride this track. Watch out for holes in the track. 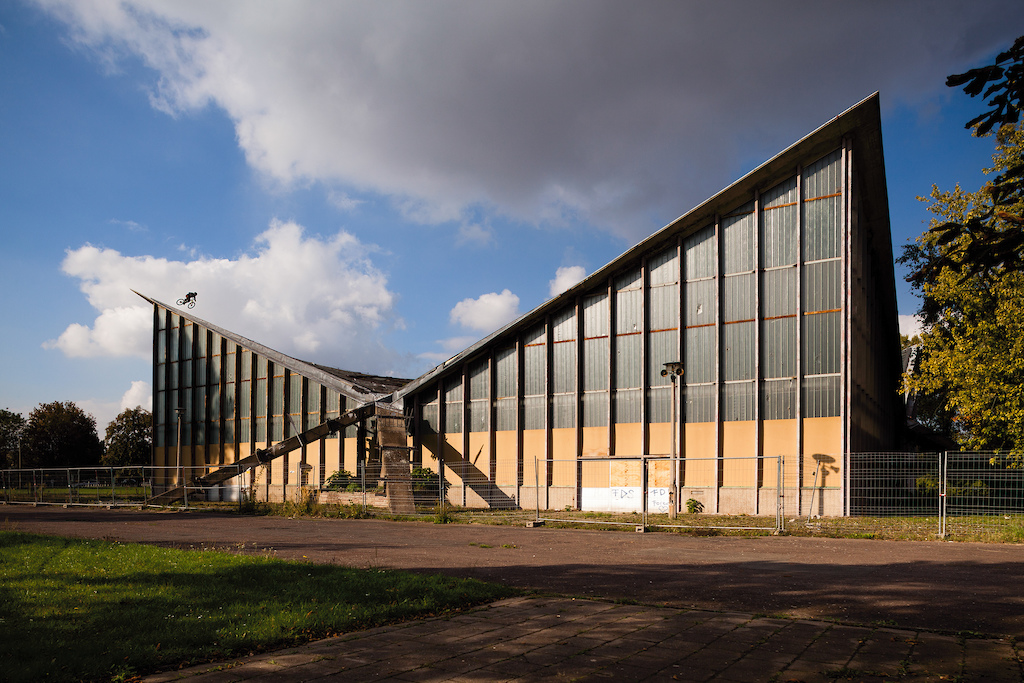 This frame is part of my photo series "Muethers heritage" about the legacy of east German builder Ulrich Muether. The story behind this image is one of my favorite ones. A lot of buildings that defined the architectural style of GDR got targeted for demolition shortly after the reunification of east and west Germany. This building was no exception. Even though plans for a renovation existed for a long time, the city left it rotting for over ten years until it was on the brink of destruction in 2017. My photo series "Muethers heritage" gained popularity and the german state television decided to air a 10-minute special about it. They wanted to film some footage of me riding a skatepark. After a few shots, I convinced them to follow me to this very building, so I could show them how I shoot my self-portraits. They were thrilled and carefully documented the process of me hoping the fence and illegally making my way up the building to ride the roof. Afterwards, I gave them an interview, criticizing the state of disrepair. The Story got aired multiple times and sparked a huge outrage towards the city for its tremendous lack of action. Enough so, that they were pressured into releasing the funds for the renovation just one month after the city. They tried to sue me for trespassing but the case was dropped shortly after. Reconstruction started in 2019 and will hopefully be finished in 2021.

A-BOMB-67 (Feb 25, 2021 at 10:29)
truly appreciate your dedication to the art and craft (and riding). you have an unparalleled talent for finding and capturing these unique locations and architectures with style and grace. half of my all time favorite PB photos are your self portraits. keep up the great work and thank you for sharing this edit!

dirtyburger (Feb 27, 2021 at 1:07)
The spomeniks of former yogoslavia are hauntingly beautiful. Such a rad film.

Tsoxbhk (Feb 28, 2021 at 9:39)
The Spomeniks are pretty wild. I was fortunate eniugh to ride around a few of them while on a bike tour in Croatia a few years ago. Got a sweet photo of me airing my fully loaded touring bike at one of them. That whole area is pretty special.

HaggeredShins (Mar 1, 2021 at 10:54)
Awesome video. Growing up riding street and not MTB as it is, I know a lot of people aren't going to understand the drive or even dedication it takes to envision and ride these kind of spots. Big props for putting it all together so well.

watchmefly (Feb 28, 2021 at 3:11)
Absolutely wonderful, Erik! You're a huge inspiration and it's incredible to hear that your drive and passion saved one of these incredible relics from destruction. Keep up the amazing work!

bashhard (Feb 28, 2021 at 13:03)
Very nice Airik! I instantly remembered that video and your pics. Was great watching it again

rosemarywheel (Feb 27, 2021 at 17:06)
The locations were lovely, but (risking being sent to hell by the sheer weight of the downvotes) can you do anything besides 180 again and again and again? Scenery

Send me to hell, so long as I can bring my bike and it has buildings like these

Airik (Mar 1, 2021 at 1:42)
Well, luckily you can click on people's profiles here and have the opportunity to figure out what they can do.

SirWonky (Feb 27, 2021 at 14:02)
Wondering why we don’t have cool stuff in PNW USA like this around......I guess if the zoning laws don’t stop you, the extreme environmentalist like Sierra Club will : /