A motorhome, 4 riders, and a half planned tour of the UK during a global pandemic, what could possibly go wrong?

The Melon team trip has become somewhat of a ritual the past 3 years. Ever since Ben Deakin, Joel Anderson and Adolf Silva visited our home island (at the time) of Bali to ride with fellow island inhabitant freerider Nick Pescetto, the ensuing carnage and non-stop laughs led to the beginning of what are some of the most fun trips we’ve ever been part of.

The 2020 incarnation of the team trip was as to be expected heavily impacted by the C-word. Initial talks of South America, China, and even Russia soon clearly become unrealistic due to the sorry state of the world.

This meant like most riders we had to look closer to home to get our kicks. So we rounded up Rob Warner, Ben Deakin, Joel Anderson, and Theo Erlangsen and hit the many hills of the UK for a week of madness.

After getting Theo Erlangsen in the country by the skin of our teeth from Switzerland before quarantine rules were implemented, the airline came through with a classic clanger and forgot to load Theo's bike on the plane

Queue our fingers in pies photographer Ryan Franklin making the call and managing to source a temporary set of wheels for Theo to ride until his showed up. 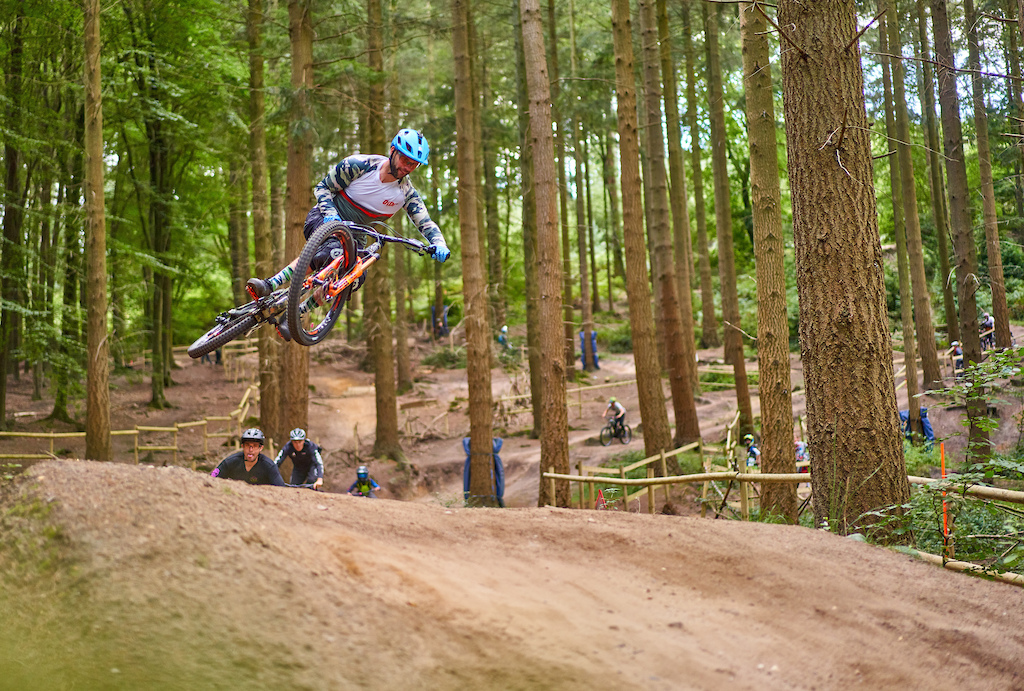 Rogate Bike Park located in the South of the UK was the kick off point for this year's trip, packing a serious punch of fun into a well-designed hillside, Rogate has become the go-to spot for Deaks as well as a number of other South Coast based riders to film the social content that many of us have developed a habit for.

The park was buzzing with riders, including with some seriously fearless youngsters hitting the DMR line on outrageously unsuitable low-end bikes giving some tangible evidence to support it’s the rider, not the bike. 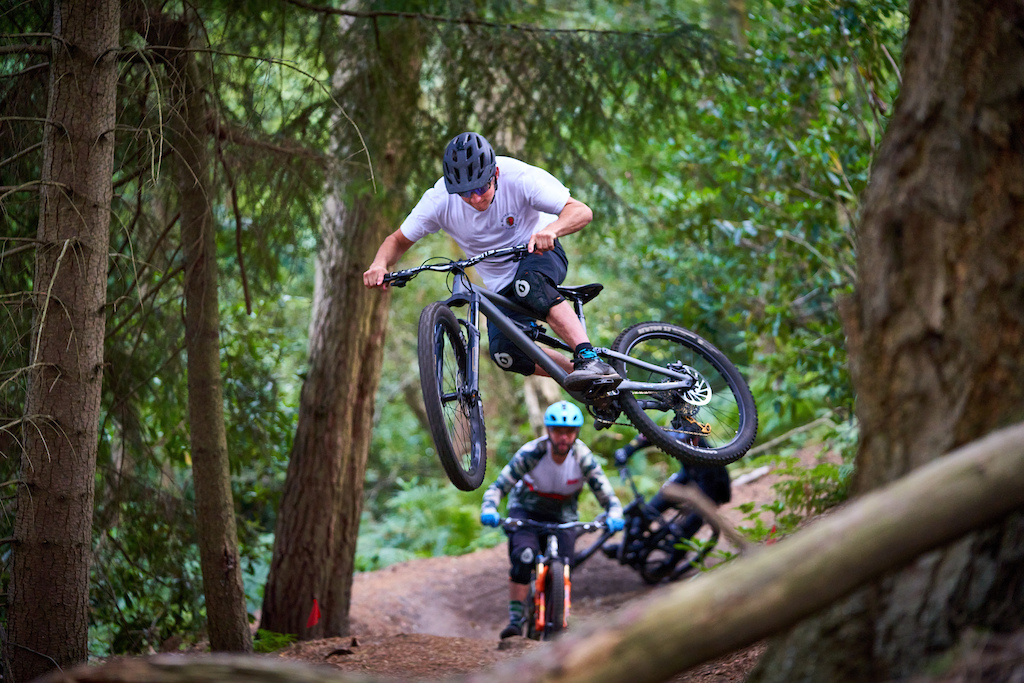 After sessioning the always fun DMR line, it was down to the bottom section of the park to train the jump lines with Rob leading a chant of "Oi Oi's" with the locals, much to the dismay of Deaks the owner of the now-infamous catchphrase.

We finished the day lapping with the locals before kicking out and hitting the road for a 3-hour drive to our first campsite in the beautiful Quantock Hills.

Joel Anderson was seemingly born on a bicycle, no matter how fast or how sketchy the hit Joel always looks calm, in control, and oozes style. Having seen many posts about one of the tracks he’s built in his local woods we’d been itching to visit and take on “Techno Tony” for some time. 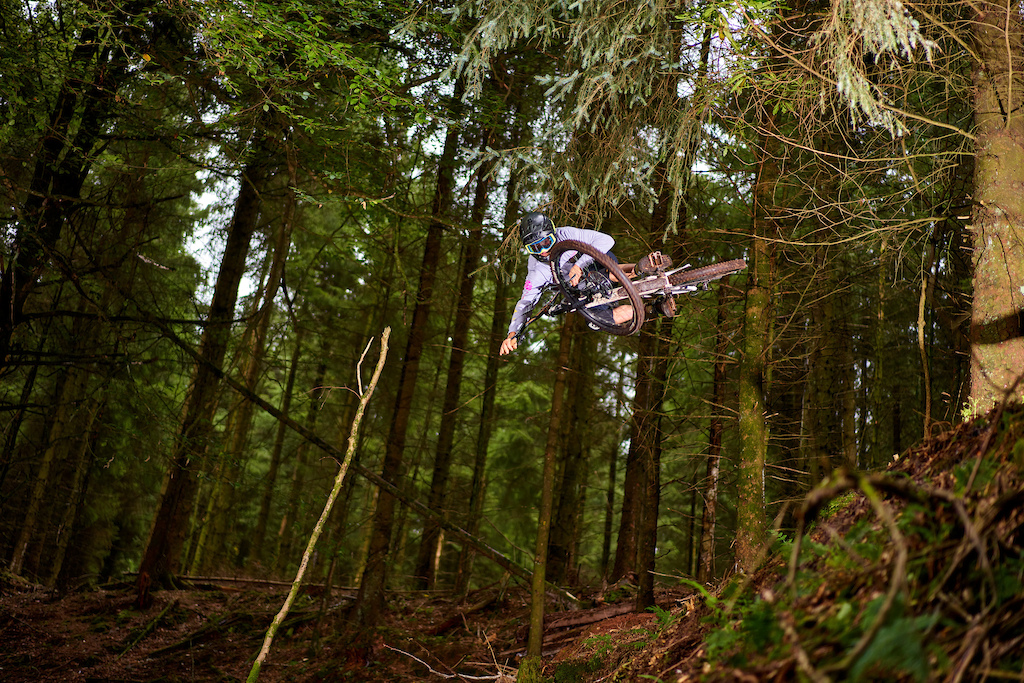 With bellies full after a fry up at a local cafe, we weaved our way through the countryside roads of the Quantock Hills to reach the top of the hill and the entrance to a labyrinth of incredible forest trails, a number of which have only ever been hit by Joel, his brother and a couple of friends.

Once the obligatory portrait photos were taken in front of the beautiful English countryside, it was off to take on the trails. Riding new spots with a local is always a thrill especially for Theo who’s first time it was on British soil.

Theo’s stoke and energy was a big source of vibes as the boys explored the trails under the woodland canopy including the infamous Techno Tony a track which is known by a lot but ridden by a few, and as Joel describes “it’s deceivingly difficult, it looks manageable on the internet but trust me, it’s stressful in reality!”. 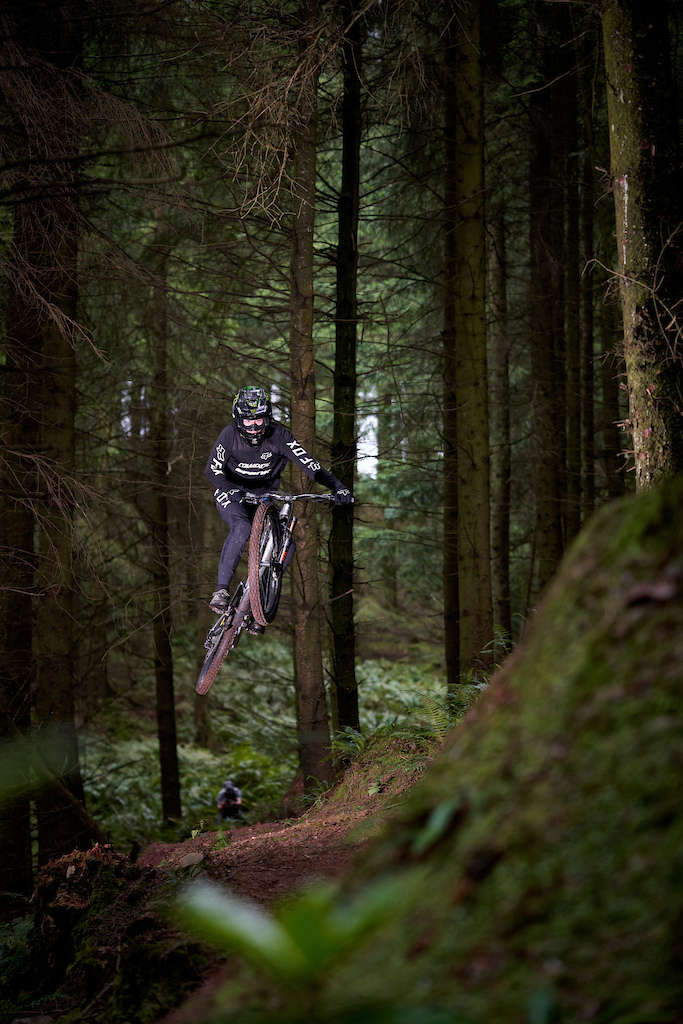 We finished the session on a hidden hip that Joel recently built and remains the only person to have ever ridden. Shots bagged it was back in the bus for a 2 hour trip up to the next campsite in the Welsh town of Abergavenny.

A spot that never fails to deliver is Black Mountains Cycle Centre. Located in the heart of the Welsh Black Mountains, this centre offers some of the biggest jumps and fastest flowing tracks in the UK. 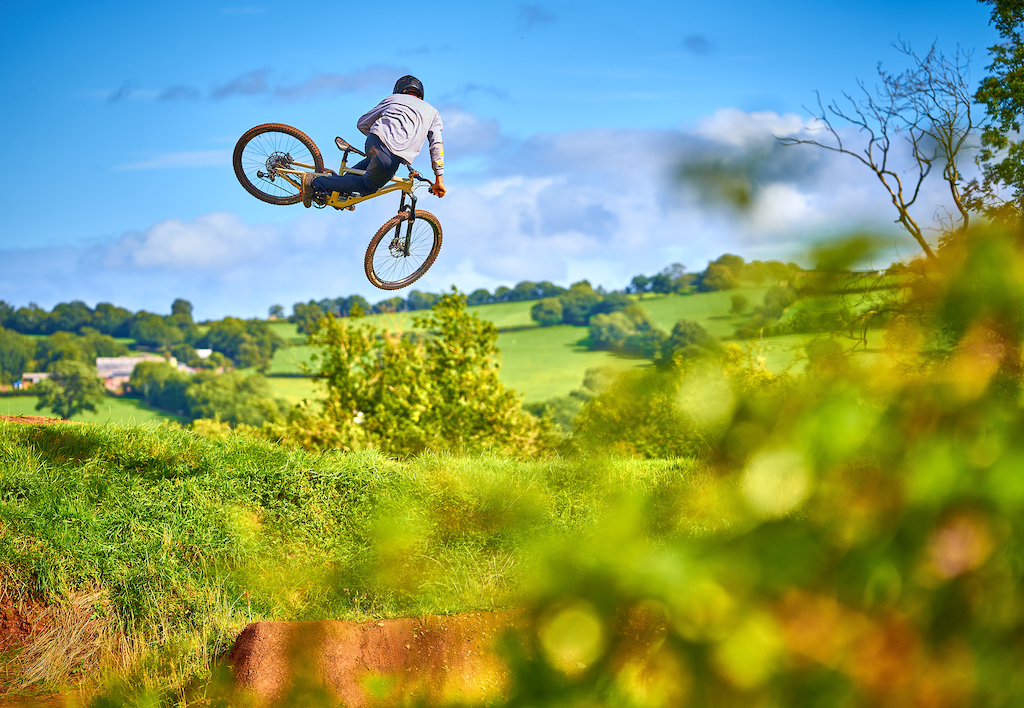 Theo in particular was pumped to hit the spot for the first time, but that hype was sadly short-lived.

After one sighting run he dropped in on Rabbit Run and found out the hard way that simultaneously taking off whilst trying to clip your foot in the pedal doesn’t mix. He took a heavy over the bars slam, bent his bars, and was carted off to the hospital to get a scan on his back.

Not to let a crash stop the fun, Deaks and Joel spent the rest of the day bagging shots on the bigger lines under the unseasonally warm Welsh sunshine. 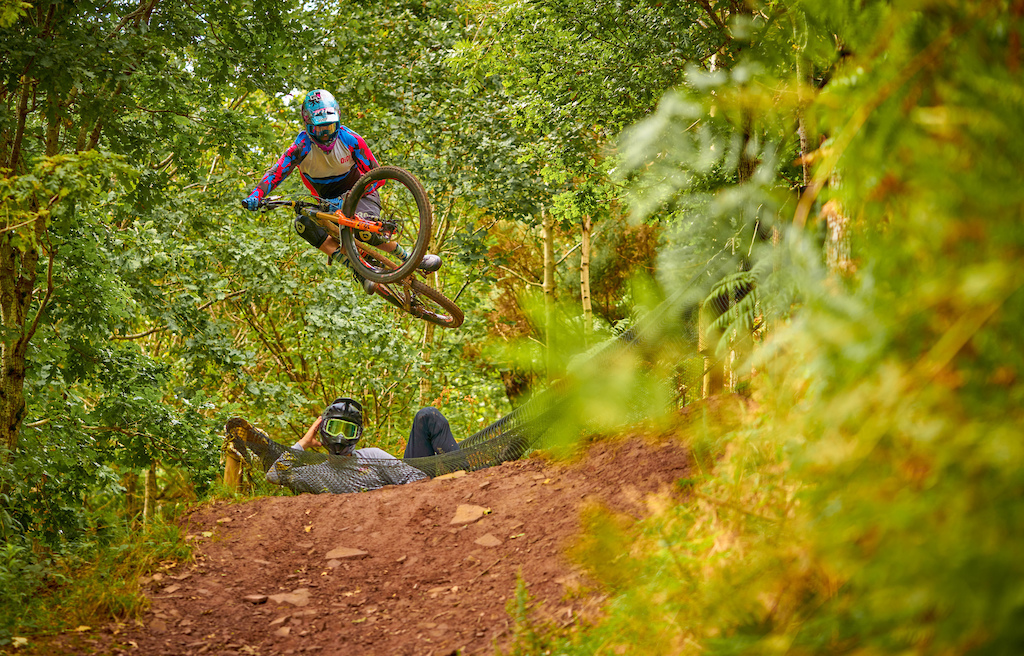 Luckily no major damage was done and Theo dosed up on pain killers and spent the next few days hobbling about on crutches.

In true Melon trip style, there was no plan real plan of what was next, and with every campsite, we called being fully booked due to the spike in home vacations, we put the word out to see who would able to accommodate a motorhome and a crew of 7 crashing their party.

Word came straight back from ex-World Cup Four Cross Bronze medalist Luke Cryer. After digging the motorhome out of a hole at Black Mountains it was all aboard for the 3 hour trip to the Midlands to Lukes Dad's house.

With Subway providing the morning “nutrition” the next spot on the tour was Cannock Chase located in the Midlands region. Well known for being a mellow trail centre, Cannock also has some super fun little tracks well built by the committed local scene if you know where to look.

Being Luke’s local spot we were at the mercy of his guiding for what turned into a hilarious day of shredding really fun trails and checking out the best of what the spot has to offer.

Continuing the "less plan = more fun" mantra we put the call out again this time to see who could accommodate the crew as we hit the road up to Scotland.

Coming through this time was Murray who runs the impressive Glentress Hotel which focuses its efforts on being the place to base yourself if you’re riding the Innerleithen area. We packed up the crew, loaded up with snacks and hit the road for a late-night jaunt up to the beautiful Scottish Borders.

Waking up in Scotland there was a noticeable chill in the air, but nothing a feast of a breakfast and endless coffee from Murrays team couldn’t fix! Fully fuelled it was off to hit the tracks up at the Golfie, the steepest spot we’d hit all trip. 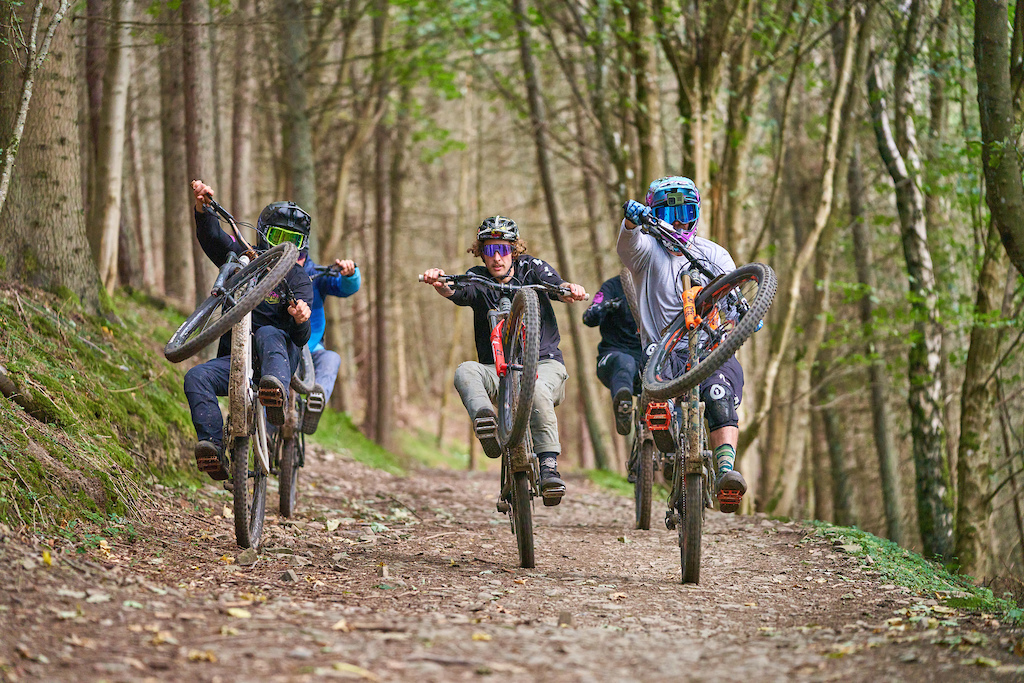 After a 20 minute crank up the fire road (Rob's E-bike leading the charge) a session railing some banging berms was the morning's fun. It was then back down to the bus for a sarnie by the river then a short pedal over to the other side of the valley. Here we met a large group of eager locals who led us up to a fun jump line where we got the perfect end to the trip shredding trains with our local guides. 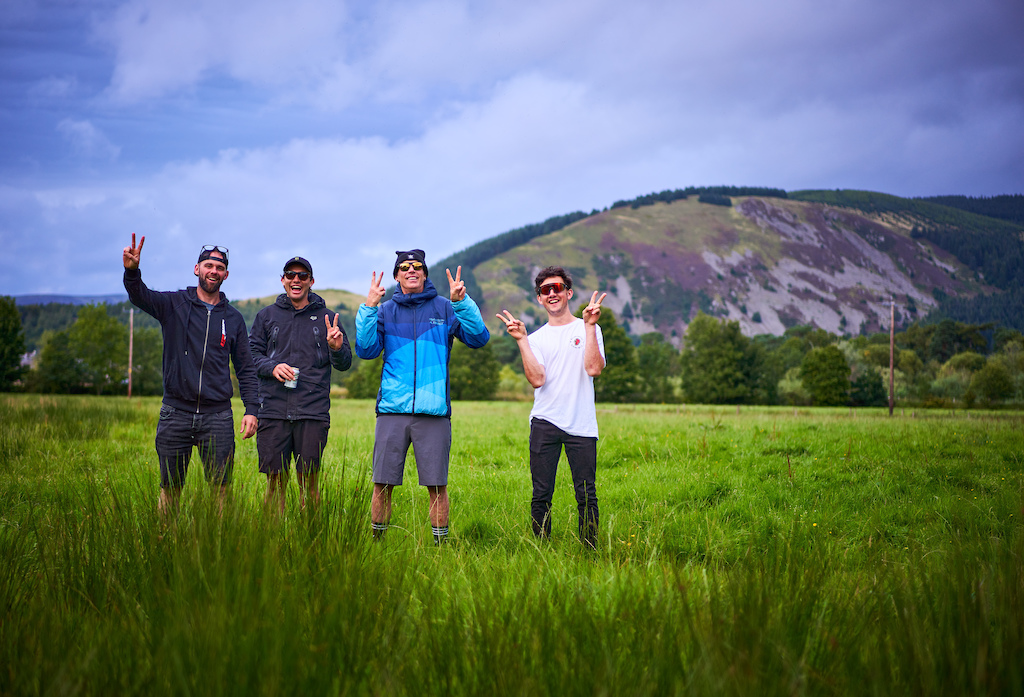 Shout out to the UK scene

To all the locals that welcomed us in to their trails a big up to you all! There are so many spots we could have hit, so many in fact that we'd still be on the road now if we were to take them all in. Thanks to anyone who offered us a tour around their local spot, here's hoping we get to you in the future. Nice one UK for having such a scene, much love.

McArdle (Oct 16, 2020 at 12:55)
I whole heartedly agree, the blokes an absolute lunatic and I f*cking love him!!
He’s one of the best sport commentators in the business!! His enthusiasm is unrivalled!!

Binderclip (Oct 16, 2020 at 8:44)
Warner looks so old without the beard.
Below threshold threads are hidden