Video: Sam Blenkinsop Takes His Daughter For A Ride In 'Sam & Indie'

When Sam’s parents bought him his first pedal bike at 3 years old, they kick-started a lifelong passion for their son.

Now, after 17 years competing professionally at the top level of the sport, and collecting his share of silverware along the way, Sam says he’s still in love with mountain biking – just as much as when he got that first bike.

“Biking has always been the thing that I love so much, and I always thought that if it ever became a job for me, that’s when I’d stop. But I’ve been professional now for 17 years, and I’m still so hungry for it.”

When Sam’s not wide open between the tape on a World Cup downhill track, you’ll find him on his local trails at home in Christchurch, New Zealand – sharing his passion for riding bikes with his daughter Indie.

Since becoming a Dad, Sam has juggled racing and fatherhood while remaining at the sharp end of the world cup leaderboards. For most pro’s, having kids would mean time to ease off the gas – but Sam says getting to share the things he loves with Indie has only made riding more enjoyable.

“My riding still feels the same, I’m still as stoked as I ever was – I’m probably more stoked because I get to share that with Indie.”

Reflecting on a life of getting to see the world through racing, Sam says he now wants to show Indie what life has to offer, like his parents did for him.

And whether Indie inherits his love for two wheels or not, riding bikes together for them is about sharing amazing adventures, and showing Indie the world, with all the incredible things in it.

A massive thanks to Sam, Lysh, and Indie Blenkinsop for sharing their story. 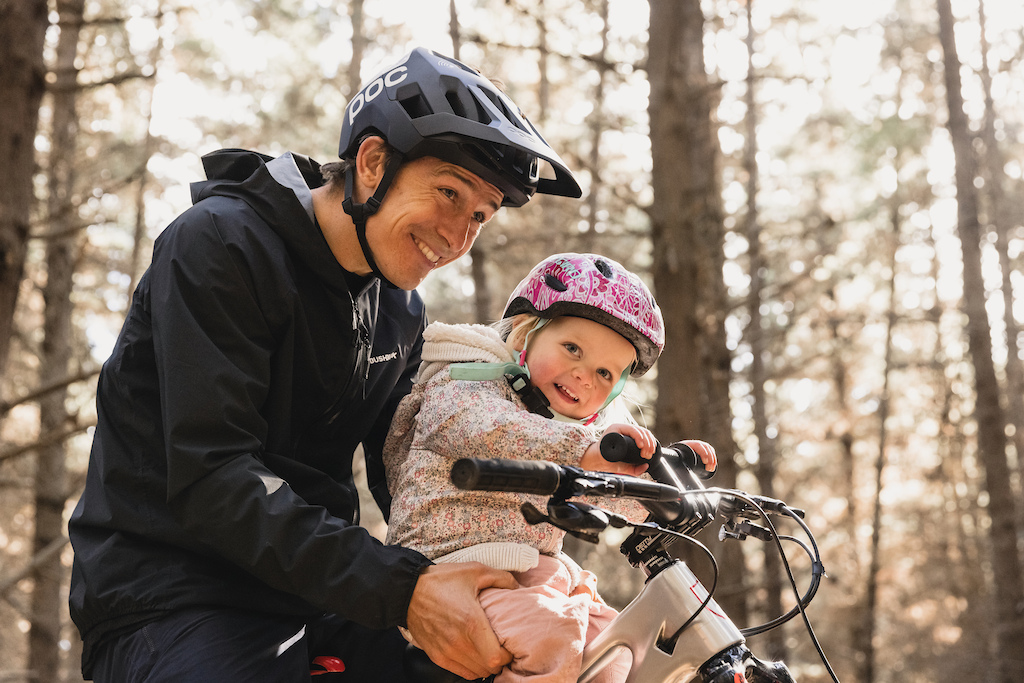 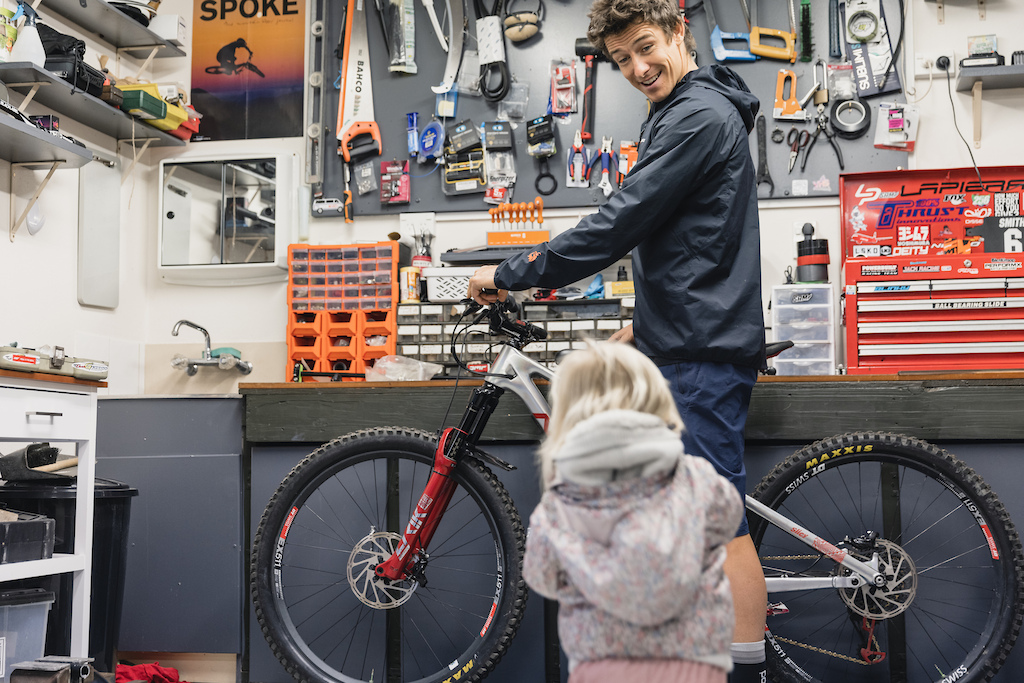 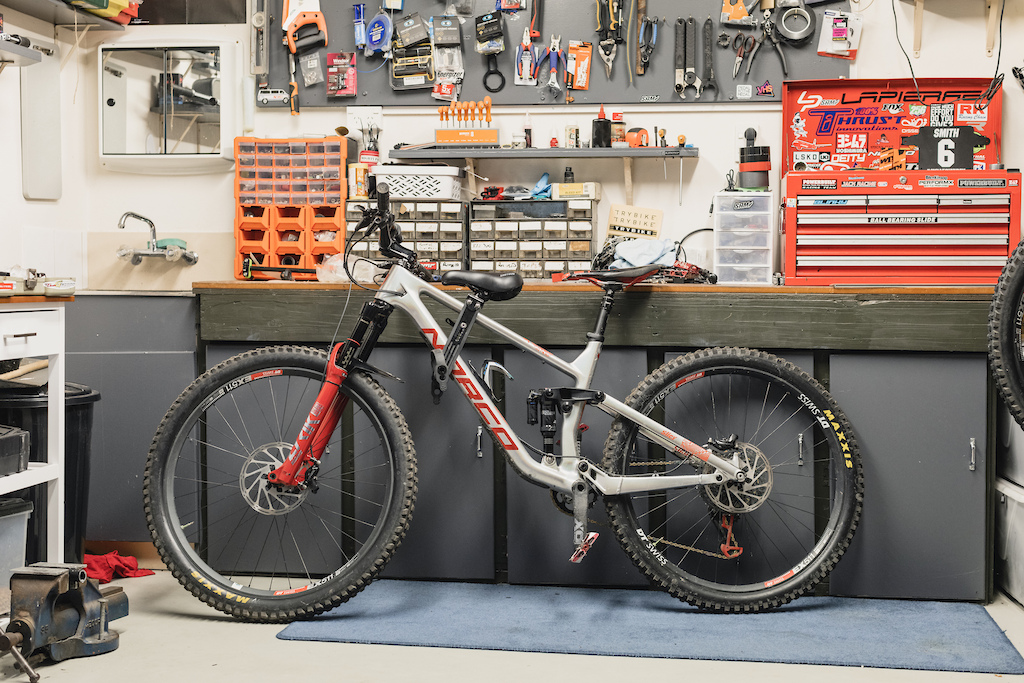 Wanna go for a ride? Not a bad set up for a mini shredder! 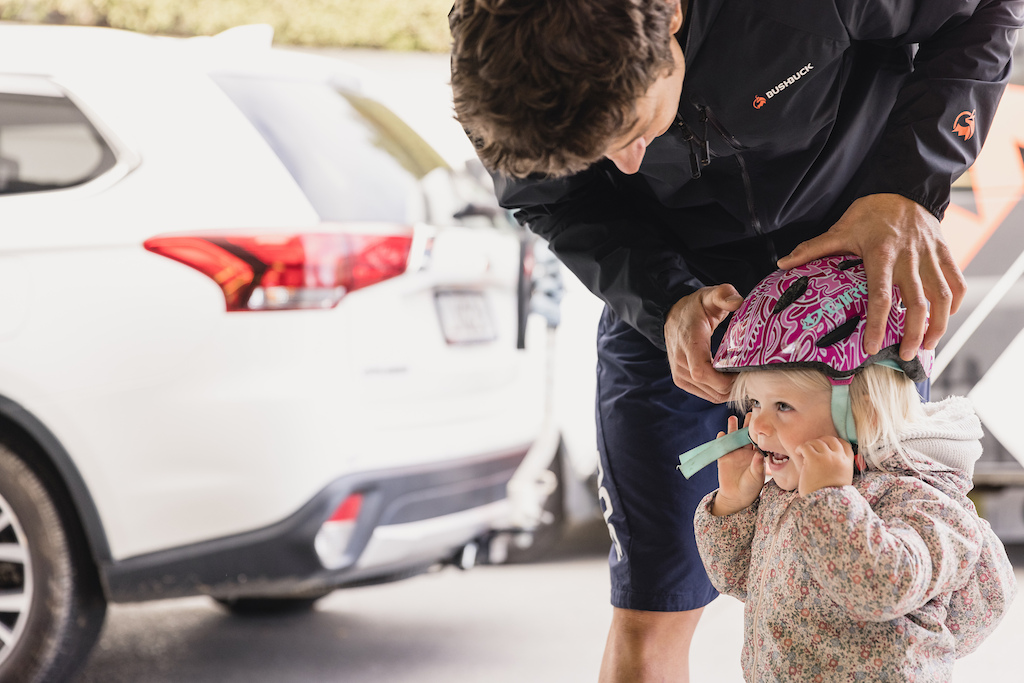 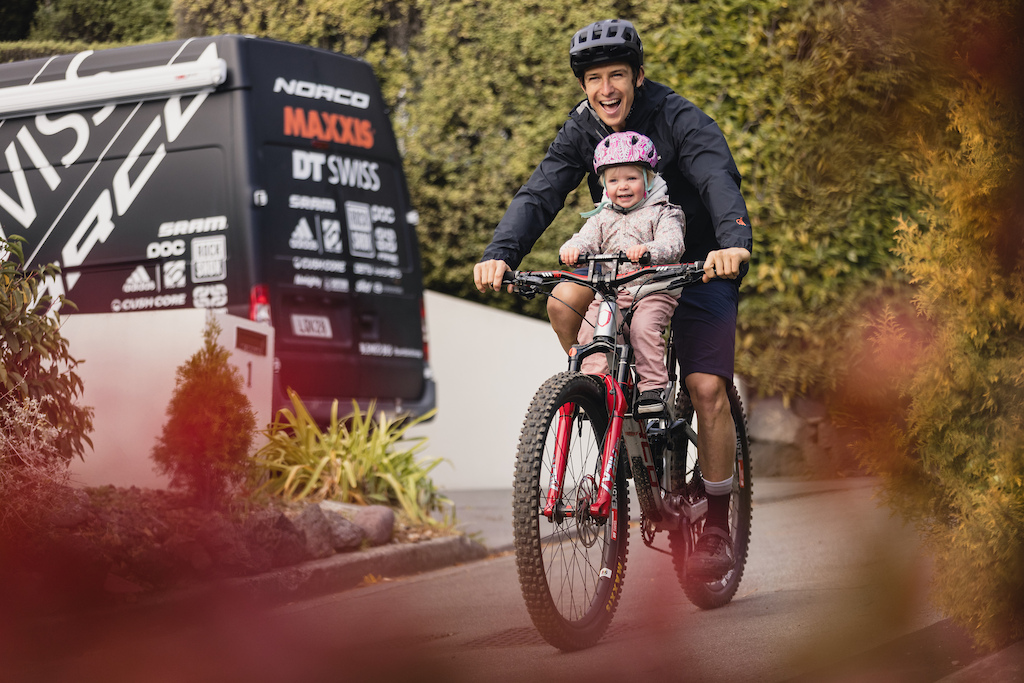 Shred stoke runs in the family 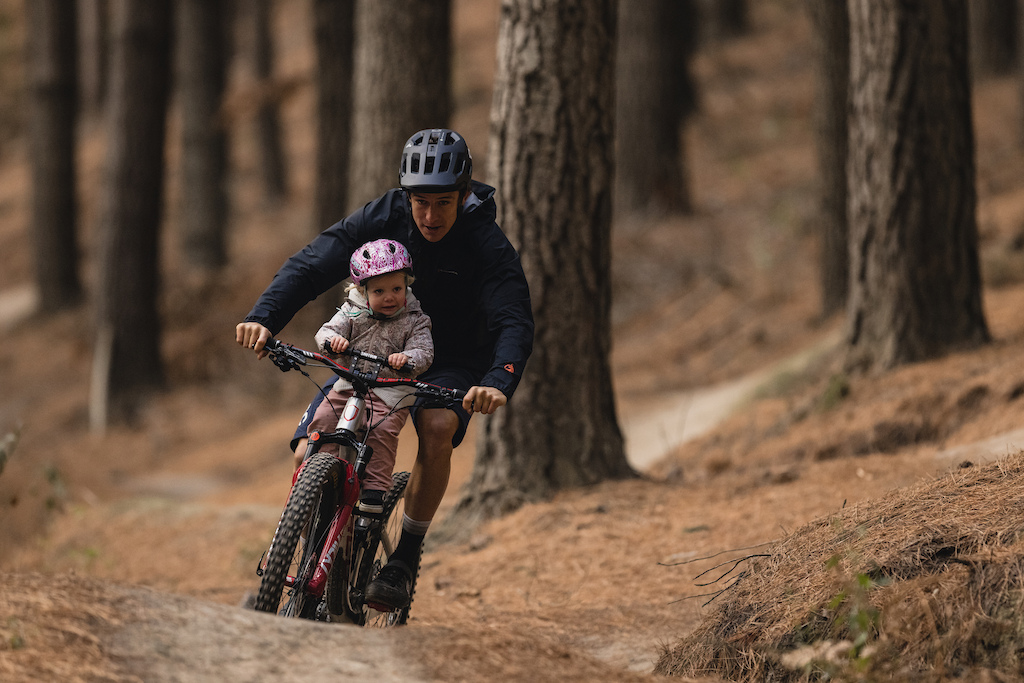 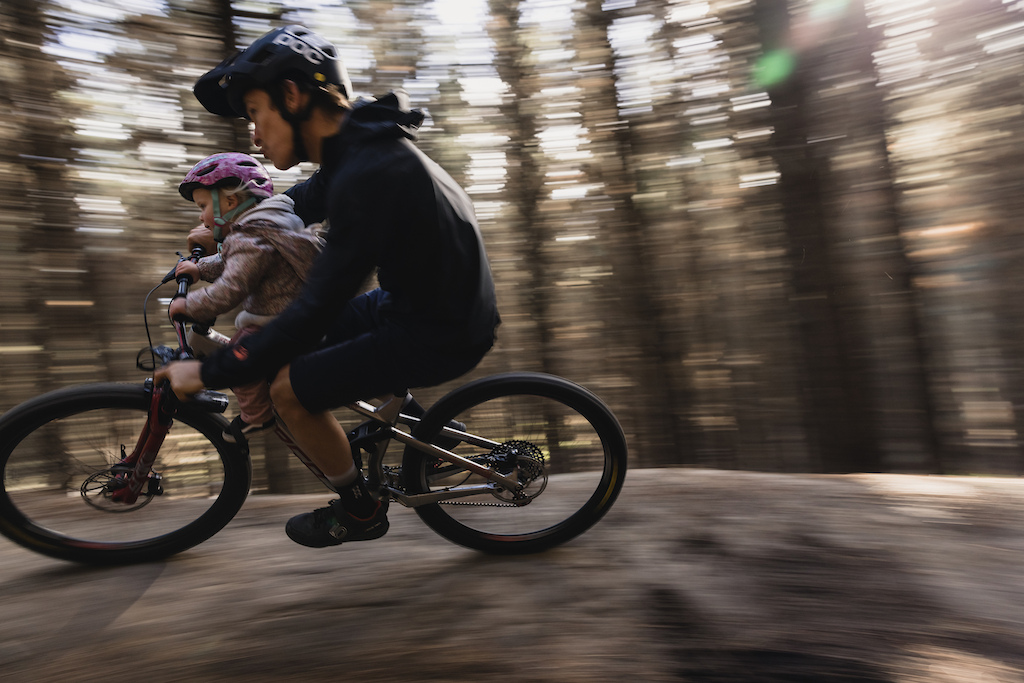 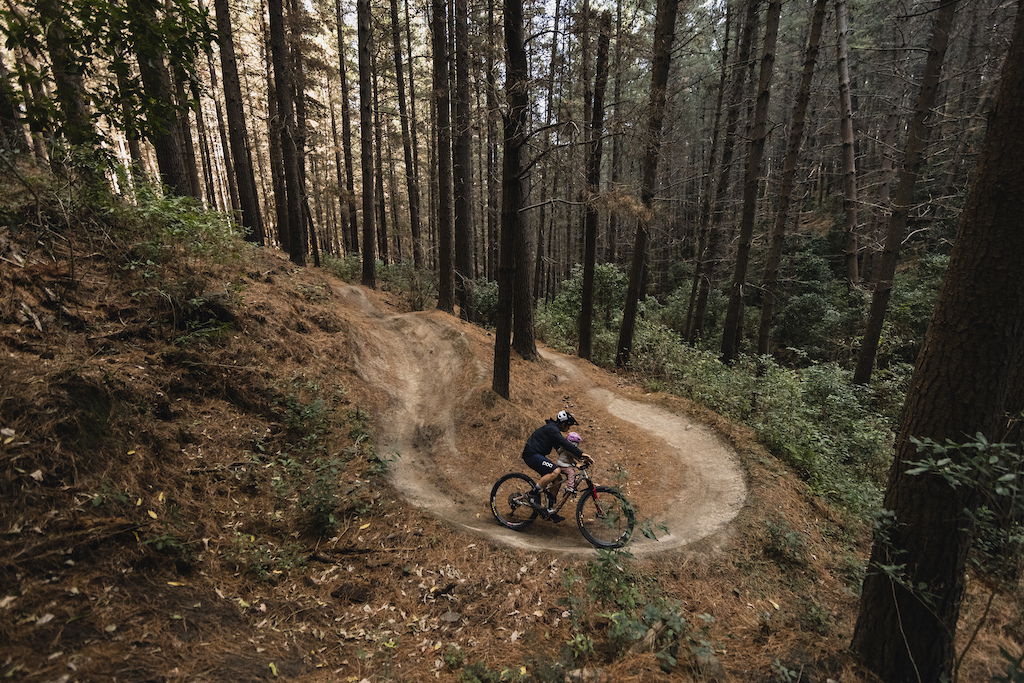 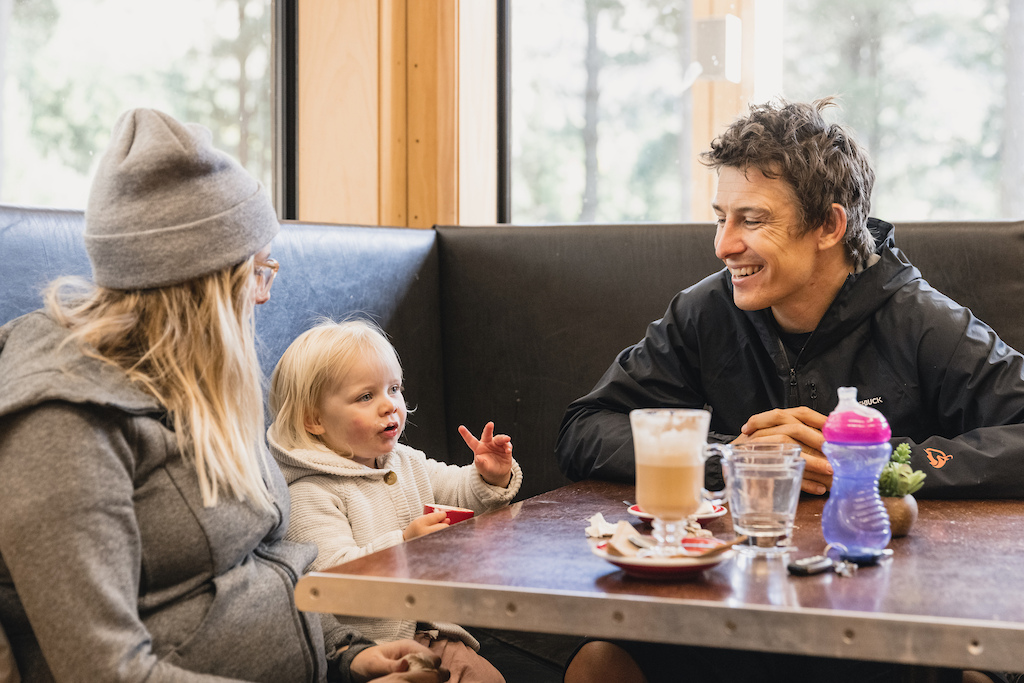 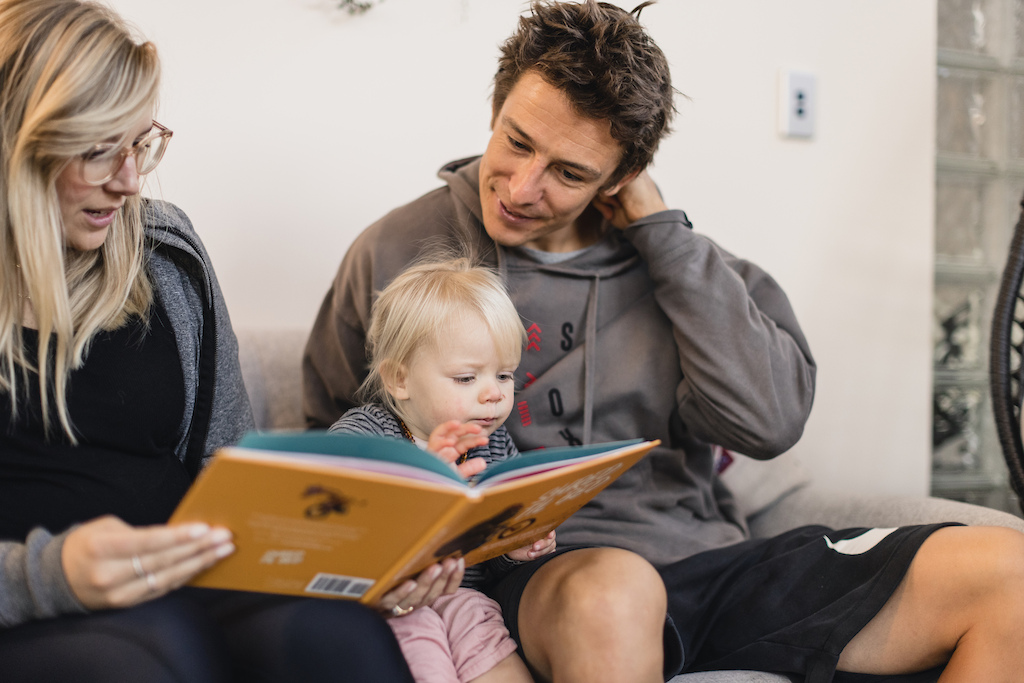 Bedtime stories
Edit produced by Cadre.nz
Brought to you by Kids Ride Shotgun

medievalbiking (Sep 18, 2021 at 18:03)
I remember the first time I figured out how to get those bloody things off when I was a kid. Careened straight into a brick wall and fell off into a rose bush. Hooked immediately.

I had two of my kids riding pedal bikes at 2 years old with training wheels. Parents just need to put the time into their kids.

CustardCountry (Sep 19, 2021 at 15:47)
@meathooker: my twins turn 3 this week and we just managed to get them pedalling by themselves 2 weeks before their birthday. It just took giving them a balance bike for their first birthday, then a bigger one at 2 and plenty of times playing on the local pump tracks at their own pace. Then a week on stabilisers learning to pedal.

They absolutely love their shotgun seats (tip - much easier with ebikes, we hired some to try out).

Combined with Shotgun seat on the MTB +another style of front seat on commuter, he was on his first 12" pedal bike at 2.5. Training wheels stayed in the packet, he was able to balance/steer and cruise with his feet on pedals right from the word go.

A couple of months of practice every now and then (plus continuing on the balance bike) and he is pedaling away - just needs to learn to brake now haha!

meathooker (Sep 20, 2021 at 6:14)
@CustardCountry: sounds like me with my youngest daughter trying to get her to stand up!

we're getting them to lift served biking and she wants to sit down the whole ride ... ARGH!

CustardCountry (Sep 20, 2021 at 8:21)
@meathooker: these 2 will be the reason my wife and I get ebikes in the next fewyears. When it gets to the stage that they need towing uphill.

Also riding uphill with a 15kg toddler, KRS seat and all the crap kids require is bloody hard work.

Tambo (Sep 20, 2021 at 23:18)
@meathooker: Standing has been the latest development for my kid, about a year after learning to ride his pedal bike

It's a real game changer. Highly recommend to all the parents out there.

CustardCountry (Sep 20, 2021 at 8:22)
It’s terrifying when you hit something slightly too quick/hard and it looks like they’re getting bucked OTB. But those foot straps are pretty good at their job. Lol

glenno (Sep 19, 2021 at 15:07)
Nice story ! Can recommend those kids handle bars too ! definitely worth having more so them them trying to hold onto your bars with no grips !

cedric-eveleigh (Sep 18, 2021 at 15:34)
So cute! And shotgun seats looks darn fun. With that plus push bikes plus those tow ropes, kids these days have it good.

RobertGrainier (Sep 18, 2021 at 17:50)
Buddy of mine has one and loves it… maybe cant shred as well as Blenki but his kids are loving it too