Video: Sam Hill is Back in Action on the New Nukeproof Mega

The internet may have just repaired itself from Sam Hill’s breaking it last week. We’re stoked Sam’s staying with Nukeproof for another 3 years (minimum). Probably time to show him riding the new Mega:

While Sam was absent from the 2020 Enduro World Series rounds, he’s not been in full feet up mode, although it has been nice for him to “relax” and enjoy a full year at home with his young family for the first time in his illustrious career. The V4 Mega is a ground up design and Sam’s been out to ensure the bike is dialled for the 2021 season. He’s even been putting in times against the clock (and winning) at his local Western Australia Gravity Series. With Sam taking a hattrick of Enduro World Series titles on the Mega V3, the V4 Mega had some big shoes to fill. But the redesigned V4 Mega has allowed our engineers to implement some fresh thinking and changes on both 27.5” and 29” platforms. Geometry changes, all new linkage and suspension curve and a full carbon frame (with a fully optimised carbon layup). 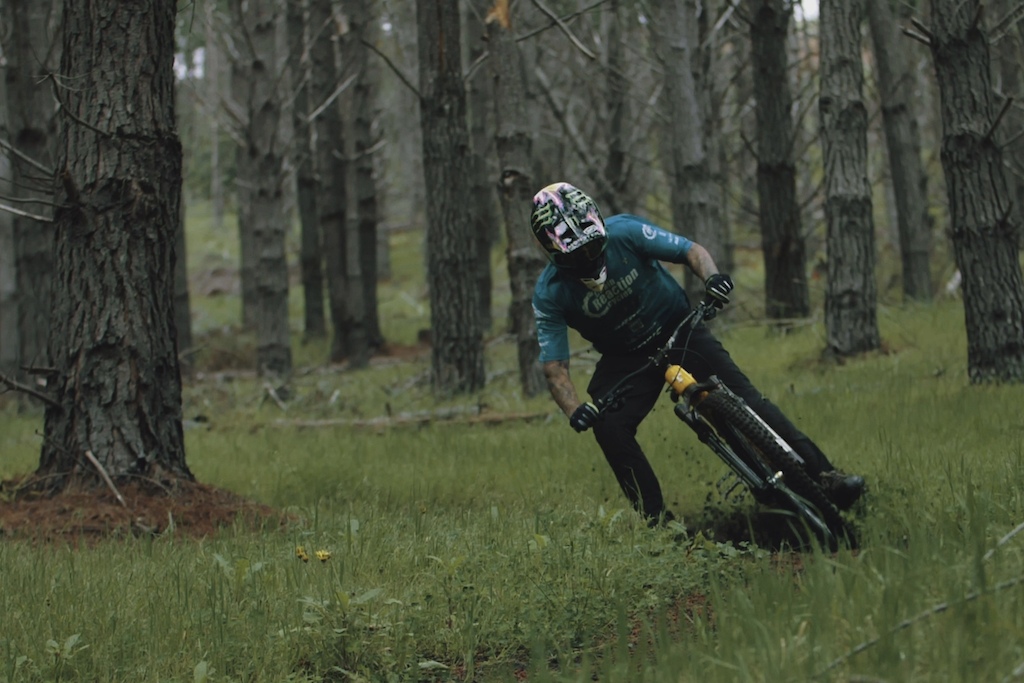 Filmed in Western Australia at the awesome Linga Longa. Taking on some of his favourite enduro and downhill trails. For those that may not have been to this area, the park is pretty remote, situated about 3 hours from Perth, towards the southernmost tip of Western Australia. Originally the land was bought in 2012 as a family retreat by owner Boxer (as he put it “to run wild and free”). As a relative local Sam has been instrumental in helping design and build in the park along with hundreds of volunteers. What they have created is a little piece of MTB paradise, well worth a visit https://www.lingalongabikepark.com

wheelsmith (Jan 12, 2021 at 5:32)
"my initial impressions of the V4 is how quick and positive it feels to change lines and direction on the trails" (says Sam on any bike.)

klake (Jan 12, 2021 at 4:11)
I'm wondering what kind of training and terrain or just raw talent it takes to be a top enduro rider. Because these aussies like Hill or Moir clearly are killing it (or the UK guys for that matter or Maes) but they clearly don t have daily access to that kind of big mountain area with long -gnarly descents. You need a variety of singletrack-purpose built bike trails so you can dial in your speed and hit the gym a lot so the muscle is there for the races?? or just born ready?

munkiemagik (Jan 12, 2021 at 4:36)
Funny you mention that, I was jut thinking as I was watching you could almost get a sense of how much strength he's using to really push the bike down with his arms and legs as he's manhandling it around the track and searching for grip and composure at those mega speeds.

MattyBoyR6 (Jan 12, 2021 at 5:15)
this video may show an idea of some of the strength. But check out Kate Courtney instagram and you'll see as an XC rider how much she works out and deadlifts.
www.youtube.com/watch?v=xXyAdMzjvo8

Afterschoolsports (Jan 12, 2021 at 5:46)
We still have plenty of terrain suitable for trails hill. There are heaps of great trails in the Perth hills. The Perth hills are actually an escarpment that rises 250m+ from flat pretty steeply.

On my small farm to the east of Perth, I have three decent hills across a ridge line that I’ve cut trails on. The drop is 180m over 1km. My individual trails are between 1.3km and 3km.

millsr4 (Jan 12, 2021 at 6:45)
@munkiemagik Sam Hill doesn't search for grip or composure... he has more control of his tires breaking point than anyone else on a mountain bike and no one looks more effortless while riding at those mega speeds.

Artikay13 (Jan 12, 2021 at 11:22)
Bike setup is probably huge for them too. Some of the pros (Elliot Heap, Greg Gallaghan, etc) have mentioned that they have to set their bikes a bit softer than they would for all-out speed on a track (like in DH) because since the runs are long and there's a lot of them so as the day goes on they fatigue and can't hold on to the bike as well and they can't ride as smooth/well because it's tossing them.

Obviously some conditioning does come in to make sure they're rock solid to survive longer and prevent injuries if they crash. Although guys built like Richie (or Grubby and Curtis Keene for that matter) do probably get away with that firmer setup because they're jacked.

Robin Walner in particular rides a fairly soft setup and it's been treating him well. Fwiw I also think a lot of people try to be heroes by riding stiff suspension overestimating how fast they are/the terrain they have and hearing that Richie and Gwin run super stiff setups (I've done it myself so I'm not blaming anyone haha)

Roobar (Jan 12, 2021 at 20:42)
I was taken to the area in Perth hills that Sam grew up and there were still the remnants of jumps and trails the motocross guys are scared to touch that sam apparently built as a teenager (or so the story goes). Extremely steep and still not in an area with sanctioned trails.

Afterschoolsports (Jan 13, 2021 at 4:47)
@Dallasdownunder: next summer maybe. I’m currently in the process of making them a bit more gnarly. Last weekend I marked out the path for a jump/flow line. Clearing and digging will start next week when my excavator is fixed.

short-but-sweet (Jan 13, 2021 at 13:09)
Can’t speak for Perth trails, but we do have smaller mountains here (much smaller than Europe or Americas, usually topping out at around 2100m) where many top level Mtb riders live.

Mount beauty is such a place where many such riders live, train. A week on the trails around there is a shock to the system, you’ll see why the best choose to live near such a place

RadBartTaylor (Jan 14, 2021 at 12:05)
Based on terrain youd expect the best riders to come out of NZ or Whistler, but you see guys like Sam out of areas like this often in sports. I think with the right person and situation, being someplace where you have to work for it breeds a different level of commitment, outside of box thinking and enthusiasm....

Lokirides (Jan 12, 2021 at 5:33)
I'll watch anything with Sam Hill, but damn why did they have to use that same tired "song" that's used in pretty much every other bike video? It must be stock / free for production companies...

Aburns70 (Jan 12, 2021 at 9:38)
as a armature filmmaker , and having done a few paid gigs, I can say its very hard to find good music that doesn't cost a lot of money. most of the royalty free music is pretty awful to work with and honestly is the hardest part of editing ( for me).

matt5311 (Jan 12, 2021 at 19:27)
i just shuffle played the music in another window and muted this vid. way better suited
music.youtube.com/playlist?list=RDTMAK5uy_kset8DisdE7LSD4TNjEVvrKRTmG7a56sY

YETI-Koko (Jan 12, 2021 at 8:13)
Did you notice when he was riding with his foot out front moto style he isn't sitting on the seat, all his weight is on the outside pedal standing on one foot. Dude makes it look so easy!

DavidGuerra (Jan 12, 2021 at 11:15) (Below Threshold)
Because it is easy, it's harder (and takes more courage) to keep both feet on the pedals and deal with any losses of traction in that position, and also a hell of a lot more rewarding.

DavidGuerra (Jan 12, 2021 at 13:11)
@SintraFreeride: I don't know, I think two-wheel drifts with both feet on the pedals are the most memorable moments when they occur. With the inside foot out all that's needed is a slippery surface. With both feet on it can't be too slippery. One who does that on hard, soap-like mud has my utmost respect!

DavidGuerra (Jan 12, 2021 at 13:47)
@SintraFreeride: This terrain here for instance, is pretty compact and offers little resistance to the drift, so getting the foot down was quite unavoidable. In looser terrain (not loose over hard) control is much easier, so much that I don't even think it counts...
www.youtube.com/watch?v=MrTMDEU05jc

Roobar (Jan 12, 2021 at 20:58)
@DavidGuerra: riding perth hills in summer like that normally results in gravel rash as it’s 10-20 cm of pea gravel over hard and once it steps out it often won’t stop. Over winter once it’s rained it’s great, but spring/summer it’s a completely different game (and why almost everyone wears knee pads.)

wickyfelps (Jan 12, 2021 at 13:16)
Sam Hill on the Mega, Bryn Atkinson on the Optic. Two bike release videos with cornering geniuses. Are Aussies just born knowing how to drift through a corner like nobody's business? Whatever it is I love watching it, over and over again.

Maybe they're made to lean....

(works better with the jingle playing in your head)

Maybe it's Nukeproof's way of reminding Yeti of the Hill vs Rude score for the last 3 years.

Curse-of-the-foot-long-sub (Jan 16, 2021 at 1:24)
Cut the guy some slack he got punished for doping completely on accident and served his time

jaame (Jan 12, 2021 at 1:12)
I love the new Mega, loved the old one as well.
I wonder what the waiting list is like in those just now. I quite fancy a 290 Elite (dark grey with yellow graphics, fox suspension). It seems everyone is out of stock.

Darragh-McD (Jan 12, 2021 at 4:07)
What is going on with the colour grading in this. The shadows seem really weird. Or else its just my monitor. Either way super riding

diamondback1x9 (Jan 12, 2021 at 9:23)
Pretty sure the earth started rotating faster when he started riding.