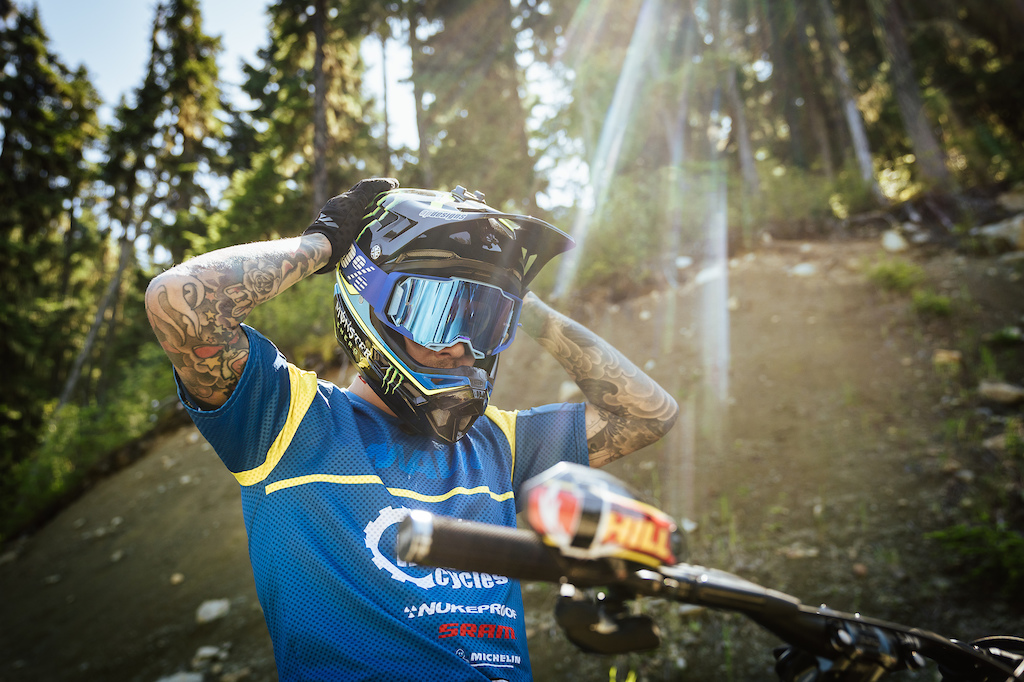 As ever, Team Manager Nigel Page was there to bring us this report:

Round six of the Enduro World Series took us back to the mountain bike Mecca of the world – Whistler, Canada. 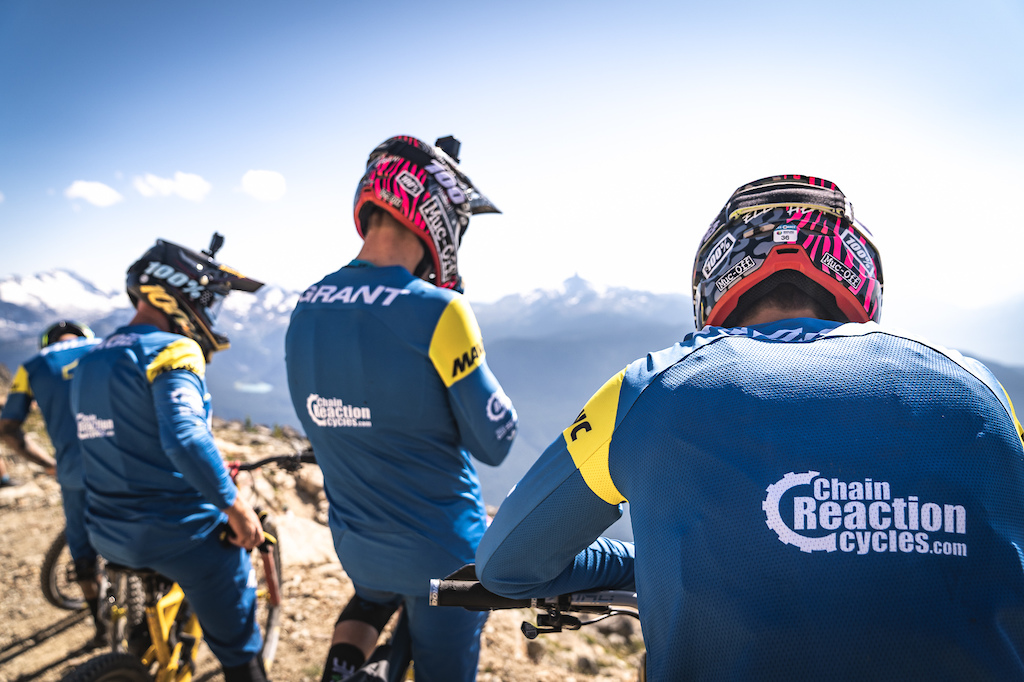 For this year’s race there were six stages with the massive Top of the World stage on Saturday night and then another five really tough stages on Sunday.

The stages in Whistler are all made up linking different trails in the bike park with a few fresh sections thrown in, but if you ride Whistler regularly or you are a local you have a huge advantage.

Stage one was a really important one at over 20 minutes long – a lot of time could be made up… or lost! 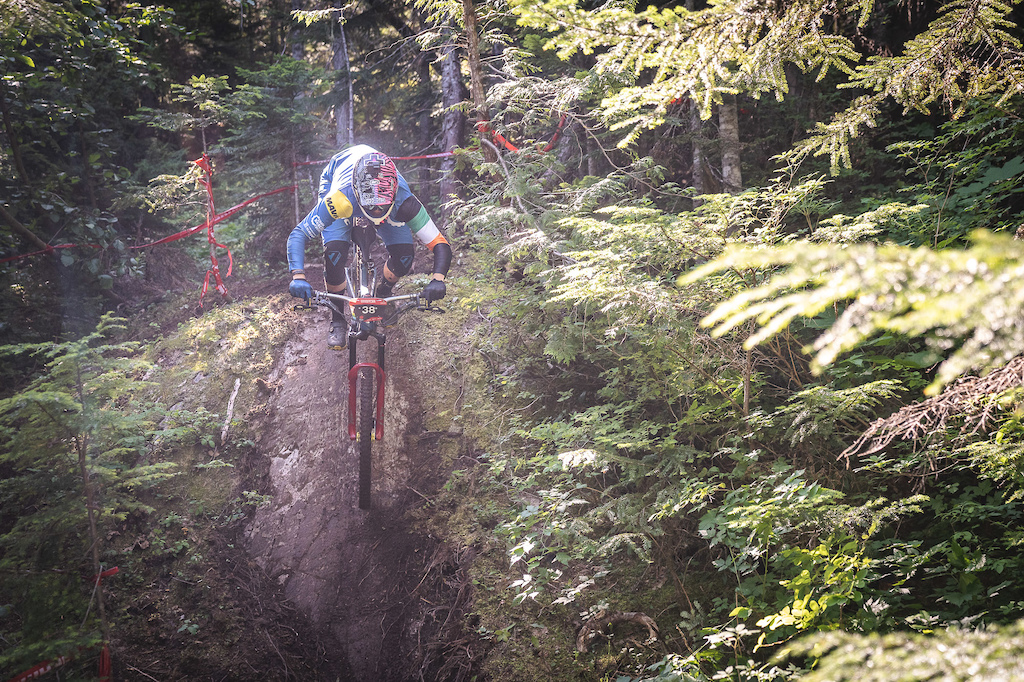 Kelan Grant was off first for the team and was nervous going up for the start, he had a huge crash on this stage last year and knew it was an important stage. Kelan ended up riding tight and finished the stage in a time of 21.32 putting him in 53rd position. 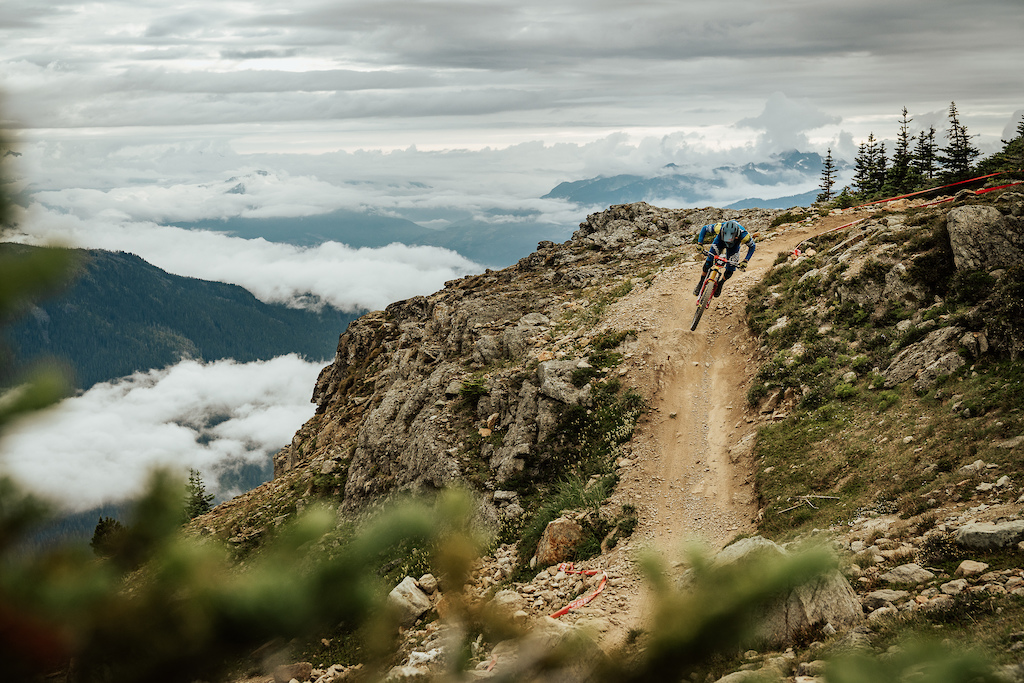 An under-the-weather Elliott Heap had never raced the Top of the World stage so it was going to be tough for him trying to race 11 miles of track with only one practice run, but Elliott did a time of 21.23 putting him in 48th place. Getting sick this year on the road seems to be a thing we are having to deal with. It’s hard with so much travel and racing to keep colds and viruses at bay. 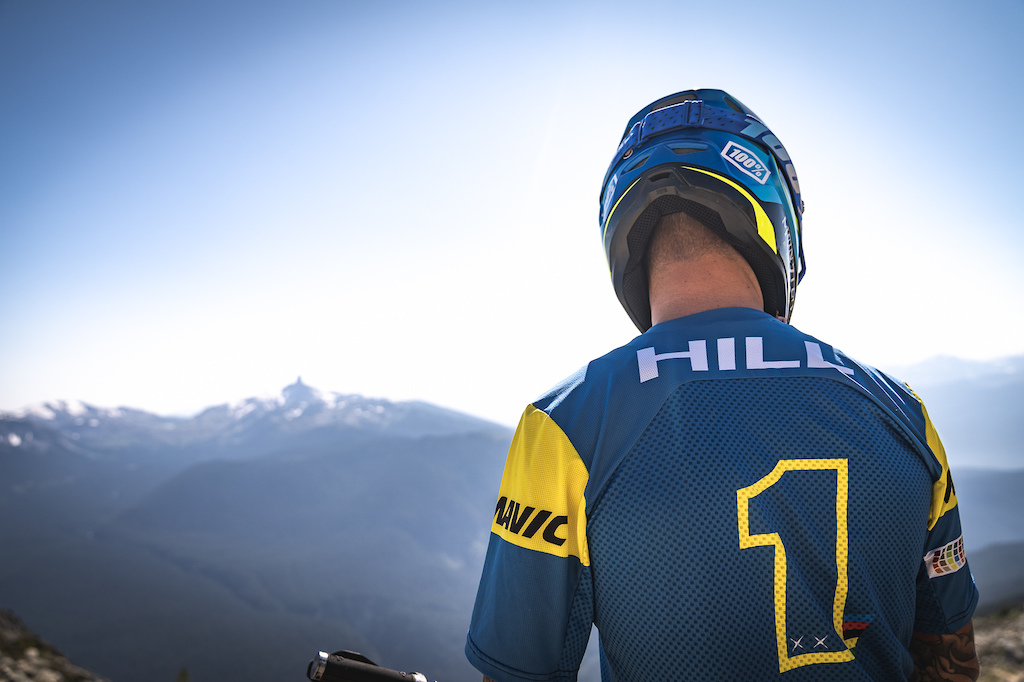 Sam Hill was focussed and determined as he went up to the top of the stage but his bad luck seemed to curse the two-time champion once again. Sam was third from last to start and just as the top 10 riders were to drop into the gnarly exposed rocky Top of the World it started to rain, making the rocks super slippery and vision impaired through the goggles.

Richie Rude had come down before the rain along with a few other guys that were super familiar with the Whistler trails and Richie put in a blistering time of 19:45 – the only rider to go under 20 minutes. Sam came down with the fastest time of anyone who started in the rain in 20:32 which put him in fifth place, but a lot of time lost to Richie on stage one. 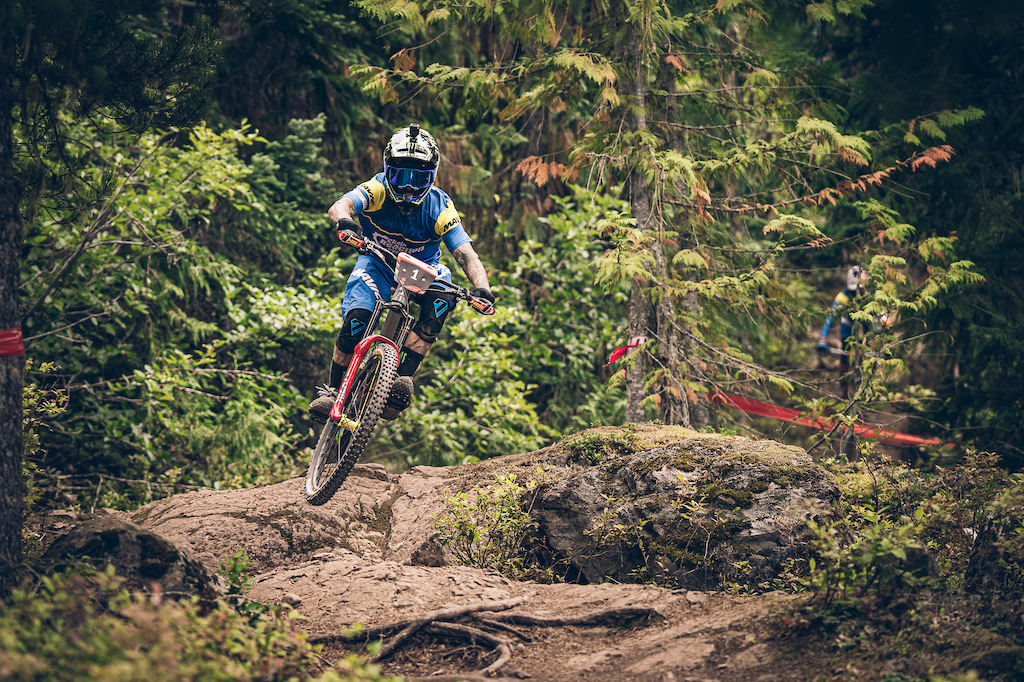 Day two was a different story with rain all through the night, making conditions slick and muddy on the tough, technical and physical stages.

Kelan Grant and Elliott Heap seemed to have a battle all day between themselves which is crazy with how many riders there are. Elliott ended up finishing 31st overall and Kelan Grant in 32nd, only two seconds separating them over just under one hour of racing. Crazy stuff, but well done lads, a great result for you both. 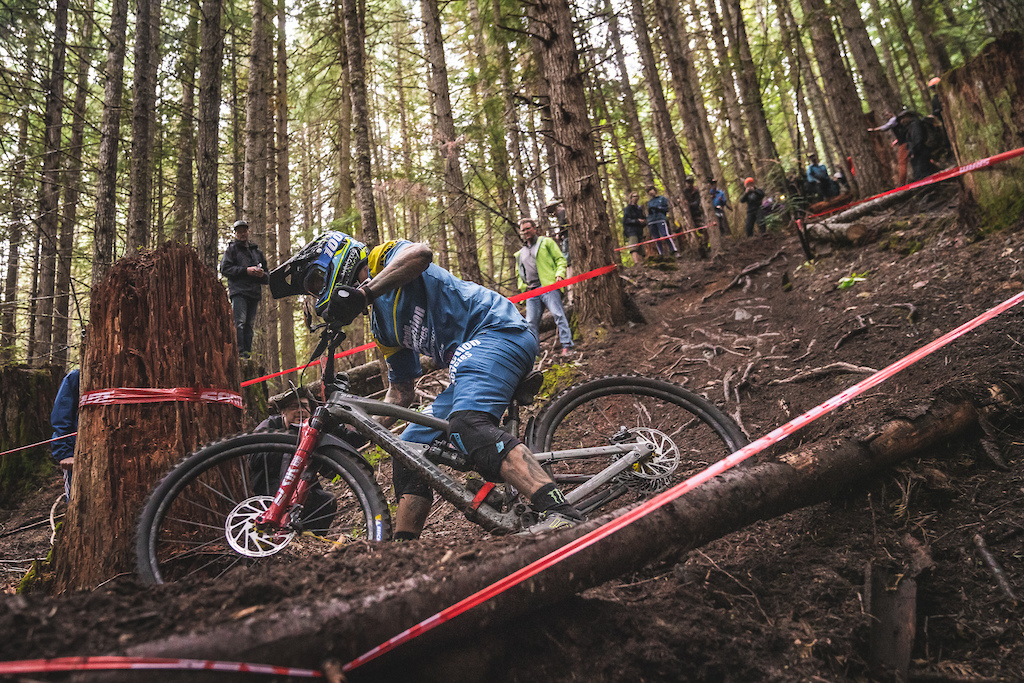 Sam Hill came out swinging on day two with a good battle against his closest rival in points, Eddie Masters, over the first three stages and then Sam knocked it up a gear on the last two stages to extend his 0.1 second lead over Eddie after stage four to finish 29 seconds ahead of Eddie to get second overall for the race. Richie Rude had too big of a lead after the first stage and took the win. 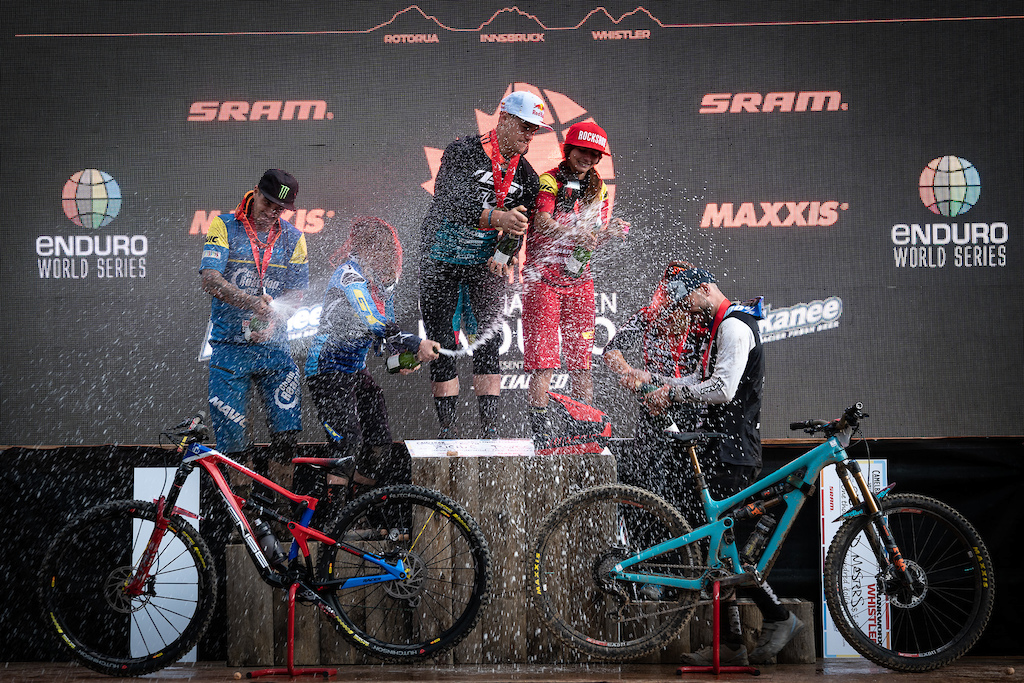 This was an amazing result, well done Sam and he has closed the points gap a bit on Eddie Masters and Florian Nicolai for the race for the World Championship title.

With two more rounds to go in North Star and Zermatt, the race in on!

fattyheadshok (Aug 15, 2019 at 4:45)
What was up with that soundtrack? Absolutely horrid. Couldn’t watch it. Had to turn it off. Photos and text were top notch.

shuttonup (Aug 15, 2019 at 19:58)
Unfortunately like getting my teeth pulled by a techno rave loving dentist.

whatyousaid (Aug 14, 2019 at 12:38)
I kid you not, last night I dreamt that I owned a baby pet duck. I bought baby duck food for it, fed it, and took care of it. The duck grew super fast and was full grown within a day, I couldn't believe it! He made a bunch of duck friends and then flew away.

Uncled (Aug 14, 2019 at 13:30)
I know let’s make a video of Sam Hill who is basically the Metallica of the Enduro world, fast, aggressive, people’s champ, a riders rider, sling a whole bunch of slo mo at it along with what sounds like a broken soundtrack of some old shampoo advert aimed at students on a gap year....
that should shift some Nukeproofs on chainreaction.com

patryka (Aug 14, 2019 at 12:04)
Some time ago his dh team mate Brandog told stories how nervous Sam Hill always was and lots of crazy stories like that and still winning with crazy margin. Fantastic interview how human type he is, not calculated machine but emotional and very human. For me he is and always will The Man

Sucks we didn't get to see Melamed racing at Whistler again. I'd bet he'd have torched it on his home field again.

cpobanz (Aug 14, 2019 at 19:32)
I like how yeti sent me an email proclaiming richie rude dominance, but they didn't explain that the weather played such a factor.

ramymcc22 (Aug 15, 2019 at 6:09)
Who the F#CK picked that dreadful music. Shocking. Honestly. Im not even joking and felt the need to comment on it. Raw soundtrack would have suited better. I couldnt even watch the whole video.
Come on !!!!

patryka (Aug 14, 2019 at 15:55)
Please note that Sam fights for over all points or even title. Richie Rude coming back from disquali. after using not permited meds. Both great, great athletes but both fight for something else. Rude is all in. just to show how good he is. Sam is ok with no. 2 as long as he is before Florian and Ed. Of course he wants to win but all in aproach can give him crash or mechanical and not worth it.

Madtown (Aug 14, 2019 at 10:43)
Team Manager making it sound like Richie coasted to the win on the second day LOL. He put time on everyone on day two as well.

steezejenkins (Aug 14, 2019 at 19:09)
If I wanted to watch a slow motion video, I'd watch myself at full speed comparatively. I was wanting to see Sam hauling it!

To be fair, Richie did nearly double his lead after the second day.