Video: Sharing a Moment on the Trails in 'Dance in the Woods'

Danica and Andrew Fife are husband and wife who love to mountain bike. The last few years they’ve lived in the Pacific Northwest riding some of the most breath-taking terrain in the world. This video was filmed on local trails near Bellingham.


The story
“When we got married, we were living in St. George, UT. Andrew got me my first entry level bike so we could ride together. Mountain biking was his hobby and he didn’t expect me to really get into it. To his surprise, I became addicted. I found a local group of lady shredders and soon I started riding even more frequently than he did. Early on I made it a goal to become skilled enough to join Andrew and his friends on their adventurous biking trips. I am happy to say I am invited on pretty much every trail now. Plus, I currently have the one up on the manuals and wheelies.. he’s got some catching up to do. Biking for us is something so amazing that we can do together or separately with our friends. It helps us explore our world, since most of our vacations evolve around riding bikes. I love steep trails with good dirt. I prefer natural to man-made but like a good jump line too.” 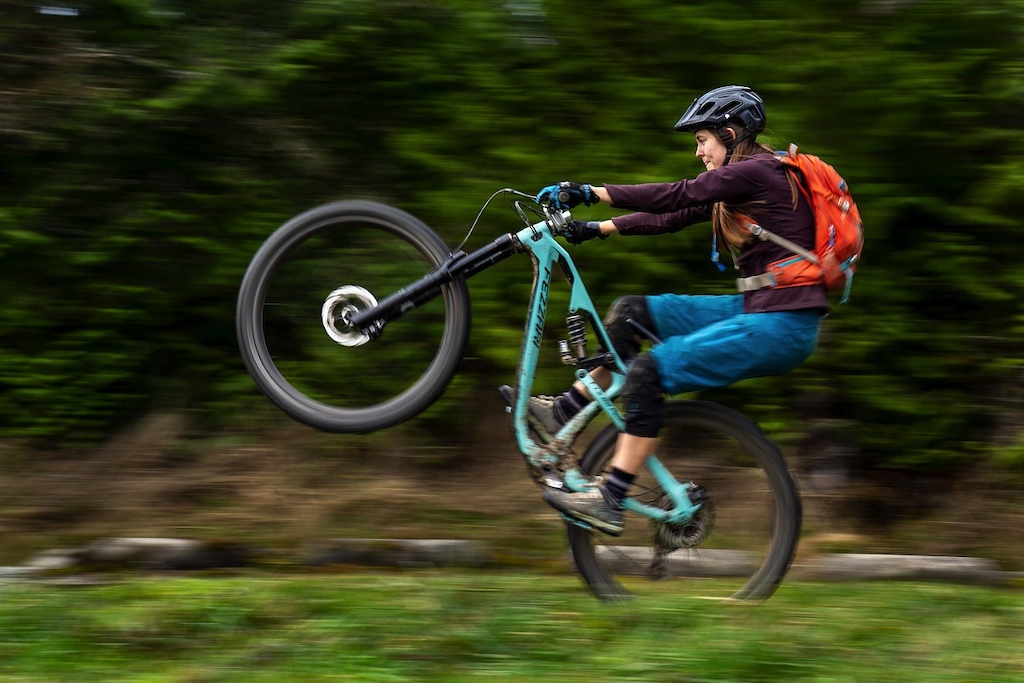 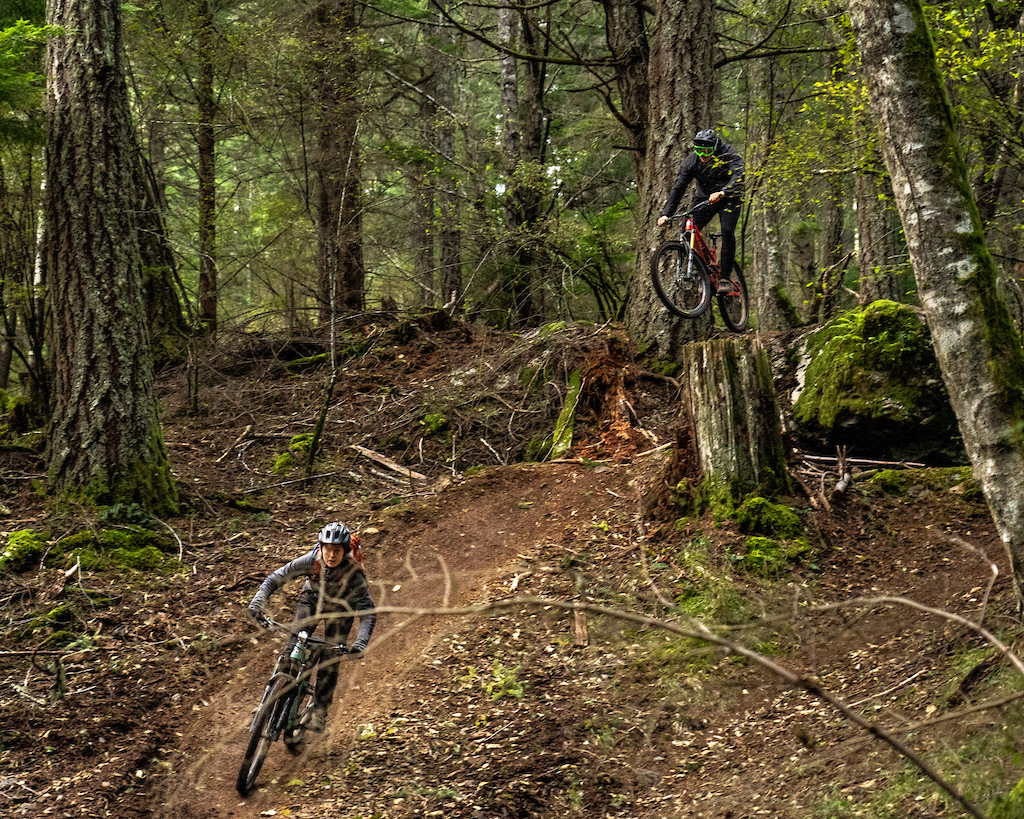 Danica continued about the day they filmed this video:

“The day of the shoot we were hoping for a typical PNW gloomy day, but it ended up being quite clear and freezing! There was some frost on the ground and probably one of the last days of riding in this area before the snow set in. We had amazing dirt conditions and had a lot of fun filming and riding together.” 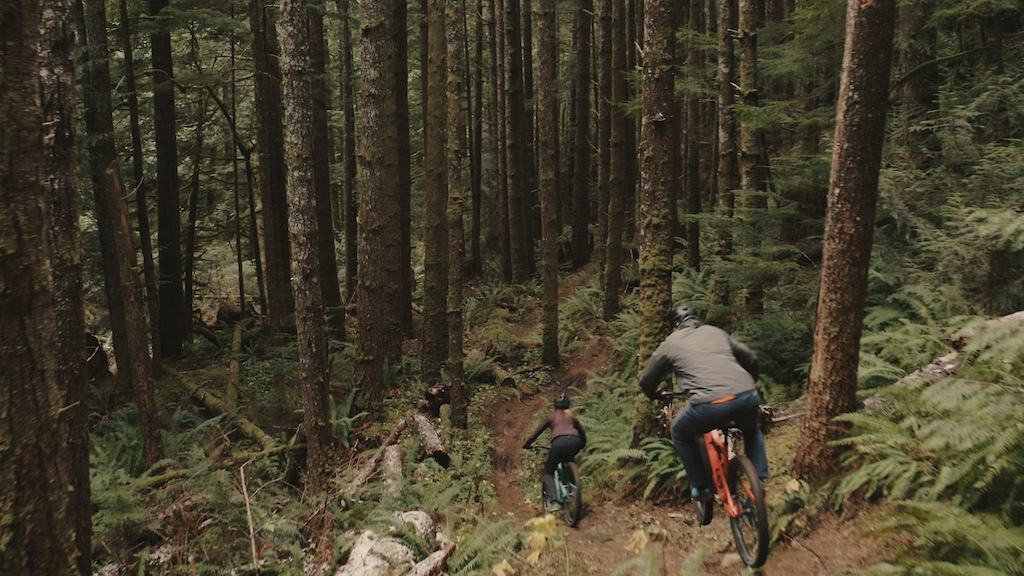 Gear picks
Danica’s ride of choice is the Fezzari La Sal Peak equipped with 29er wheels and 170mm suspension in front with 150mm in the rear. Andrew’s pick is the Delano Peak 29er with 150mm fork and 135mm shock. 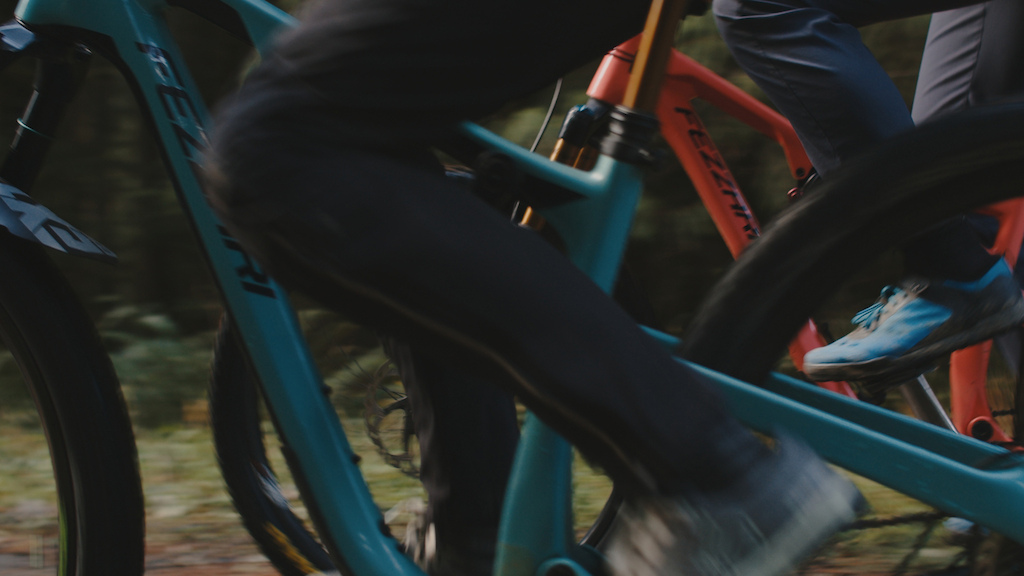 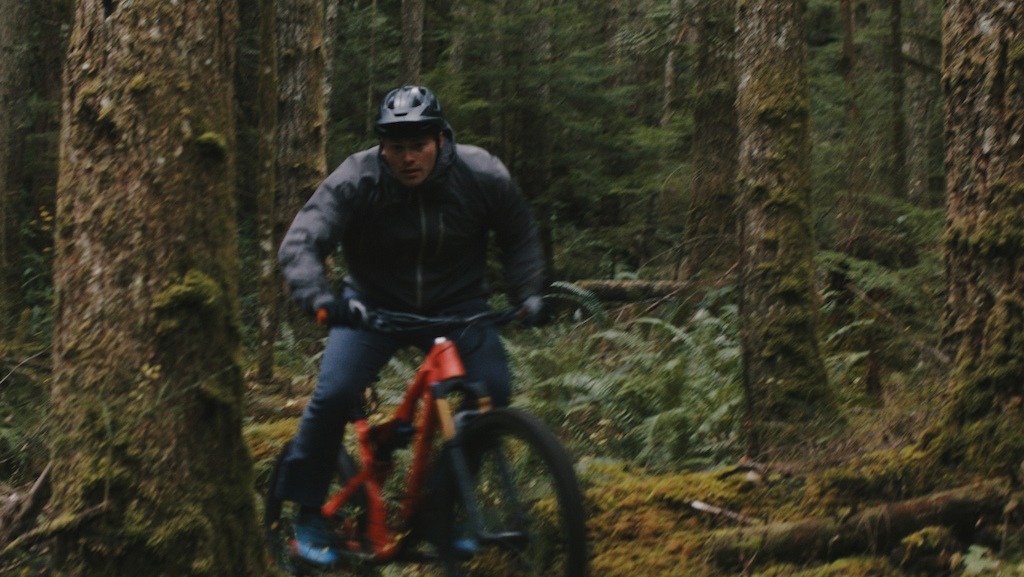 The future
Andrew and Danica recently migrated from the dense PNW forests down south to the Las Vegas area and will be riding a lot of dry desert conditions through the winter on many of the Bootleg trails. With much of 2021 travel plans still unknown at this point, they’re excited to focus on riding together and continuing to spend a lot of their time together on bikes. 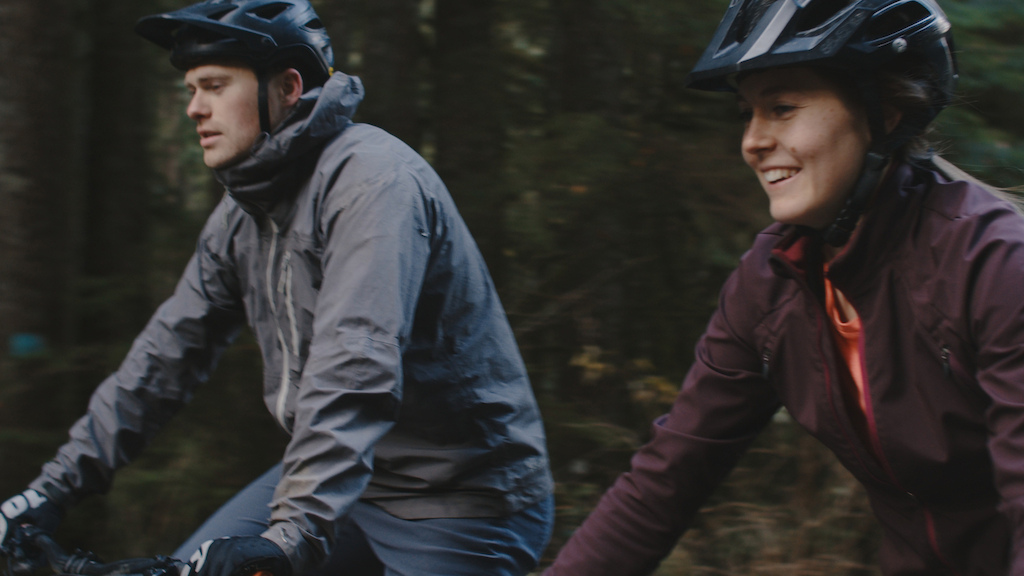 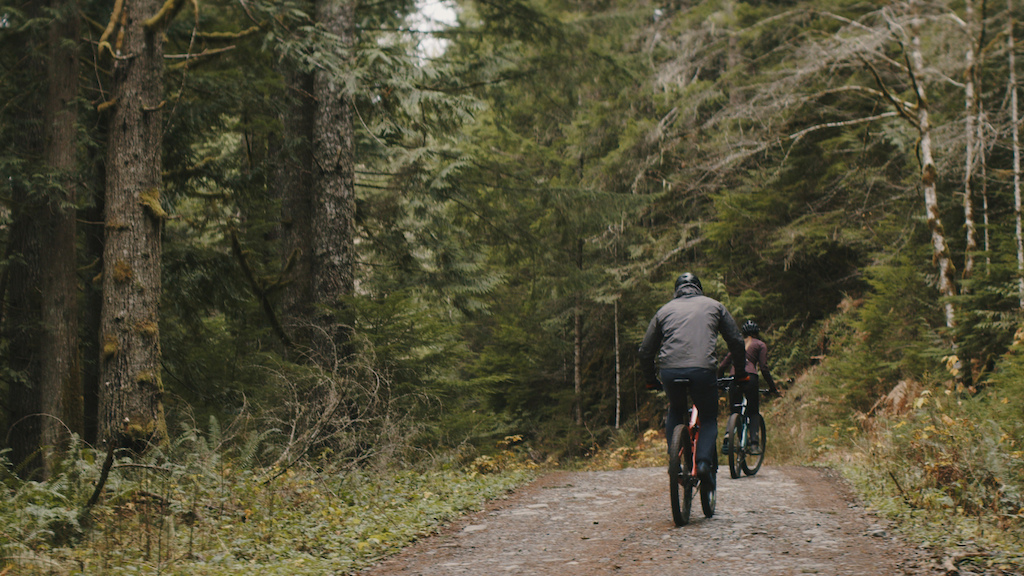 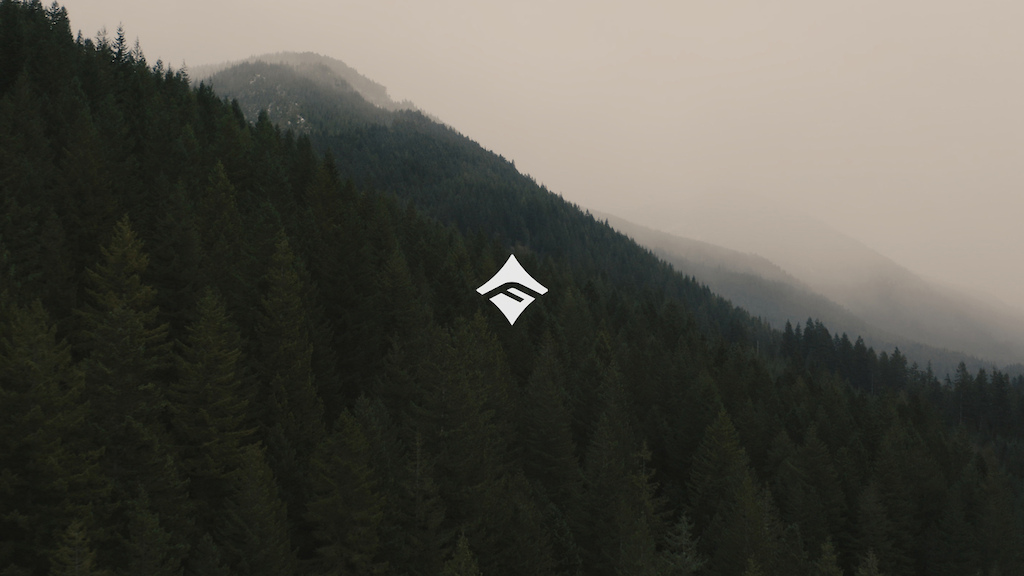 Another thing I found cool about the video is the fact that they didn’t show up in a Tacoma but a Vibe instead.
And promoting it’s okay to just go out taking it in your own rhythm don’t need to be Remy and the trials don’t need to be Squamish . But it d be nice though ha

chubby5000 (Dec 30, 2020 at 8:21)
That was a really nice and refreshing video. This is sexist, but I yelled(ish) to my wife “Woah this chick can manual!!!” and I was stoked.
Chill song, chill riding in beautiful scenery. With a fairy tale back story.

Rdenney3141 (Dec 30, 2020 at 8:36)
Danica and Andrew are a blast to ride with. She always has an awesome attitude and has great tips if you are questioning your skills going through any sort of terrain.
Beautiful video, it never looks like this when you’re actually riding through the woods. Makes you want to stop and look around a bit!
Stoked to see some videos of them in the desert!

slayersxc17 (Dec 30, 2020 at 6:25)
This is what I dream that my ride looks like with my wife. But alas, I have two crazy boys 3 and 4, and we are constantly checking they are flying off the appropriate sized jumps. Guess that’s not a huge problem

thatguyzack (Dec 30, 2020 at 9:10)
Stoked to finally see Danica show up on the main page! Her and Andrew reflect all the reasons we love to ride, so much passion but also carefree and fun. We need more content like this.

Ry-gar (Dec 30, 2020 at 8:33)
Wow what a life, to get to ride bikes in that part of the world, would be the greatest thing ever! I couldn't imagine ever living anywhere else or ever moving away from this amazing gorgeous luscious part of the world!

ShinsOfSteel (Dec 30, 2020 at 9:35)
Great people, great bikes, great edit! Makes me remember what a blessing it is to live in the PNW. Nice job Danica and Andrew! Can’t wait to see some deserts edits and hopefully be able to ride with them in the future!

jaj23 (Dec 30, 2020 at 9:37)
Great video that captures the essence of mountain biking. I've had the opportunity to ride with Danica. She has the best attitude! Always smiling, having fun, and willing to absolutely smash down anything. I hope to ride with Andrew and Danica in 2021 before they head off on their next adventure.

Mavinon (Dec 30, 2020 at 15:15)
What a sweet video! love the PNW vibe and it makes me want to go ride so bad! Danica you are such a big role model for me. You have taught me so much, not only you have helped me improve my mountain biking skills but you have also reminded me that consistency, effort, and hard work are the key to success and accomplishing your goals. I have seen you practice over and over your manuals and wheelies and I know all the effort that went into it. So proud of you girl! You rock! Miss you Fifes, and hope to ride with you two soon!

Andrewcycleaddictstaton (Dec 31, 2020 at 4:54)
nice riding. i feel like i got lucky. my significant other fell in love with mountain biking. all i had to do was surprise her with a big ol YT box on at the front door. "DID YOU BUY ANOTHER BIKE??" yes, but it's your new bike.

capnkirk83 (Dec 30, 2020 at 9:00)
I have had the opportunity to ride with Danica and Andrew on a few occasions. Down to earth people and enjoyable to be around.

Tron23 (Dec 30, 2020 at 9:05)
This is awesome! There’s nothing better than hitting the trails with your partner especially, when you get to do it in such a beautiful place. More of this!

ATXZJ (Dec 30, 2020 at 10:23)
Can't say how great it is to have your partner into MTB. Whether it was auto racing, off-roading or bikes, my wife has always had my six. Also makes a huge difference when trying to justify expenditures if they are included, and enjoy your hobbies as well. Vids like this make me smile. Keep em' coming in '21!

trailhound79 (Jan 3, 2021 at 9:52)
I really enjoyed this video and thought it captured very well the type of riding that probably the majority of people on here do (despite what they like to think or claim they do in the comments!)
I don’t get all the negativity - if it’s not your cup of tea, then go and watch something else, one thing PB does very well in my opinion is cater to a wide range of tastes - it doesn’t all need to be 50ft hucks to flat on 2006 Norco’s or Knolly’s you know!
So what if they’re not the fastest riders out there, sponsored pro’s or knarly freeriders (brah) - it’s all just bikes people.

Tron23 (Dec 30, 2020 at 9:06)
This is awesome! There’s nothing better than hitting the trails with your partner especially, when you get to do it in such a beautiful place. More of this!

ridelikeyoulift (Dec 30, 2020 at 13:11)
Andrew and Danica are super kind people and they’re the ultimate team (: Andrew finished his M.S in exercise science with me at WWU , and saved my ass from making stupid mistakes on a daily basis lol. Im stoked you guys are living the dream right now!

NatanaelHP (Dec 30, 2020 at 13:22)
Great video, I've been watching Danica's content in YouTube, waiting for the new adventures on their new spot. Their bikes are great and its awesome that they both love MTBing and can shred the trails and create content together. Keep it up

whitneyzalewski (Jan 1, 2021 at 20:12)
Really cool video!!!! The filming is great and it really shows what the area is like in the Pacific Northwest! So fun to see a couple riding together and just enjoying the beautiful terrain!

Alexhandro26 (Dec 30, 2020 at 12:20)
Love to see Danica out riding and having a blast! Also jealous that she’s so amazing at wheelies and manuals!! Beautiful footage too, kudos to the film crew!

crysvb (Dec 30, 2020 at 8:35)
what a stupid comment lol everyone who's anyone in biking has an instagram and can make an edit. pinkbikers eat out of the hands of self promoters like remy lol

swenzowski (Dec 31, 2020 at 6:32)
@crysvb: Remy is a pro athlete though, and a very talented rider who creates interesting content. These people are just rolling around some trails. I mean it's nice that as a couple they get to spend time together riding bikes, I like that, but pinkbike front page material?

crysvb (Dec 31, 2020 at 8:00)
@swenzowski: i'll happily take a married couple shredding trails together over remy selling his soul for his sponsors LOL it's a very nice change of scenery.

swenzowski (Dec 31, 2020 at 8:48)
@crysvb: So you'd rather watch amateurs doing nothing special, rather than talented riders showcasing incredible skills? Each to their own I guess and you're entitled to that. But I'm also entitled to voicing my opinion in the comments lol.

crysvb (Dec 31, 2020 at 9:36)
@swenzowski: it's just nice to have something different, there's nothing cool about trying to bring this couple down for doing what they love. especially trying to bring them down for "being influencers" when everyone's hero Remy is the biggest self promoter

swenzowski (Dec 31, 2020 at 11:47)
@crysvb: I guess when I used the term "influencer" with reference to mountainbikers I didn't mean it in the technical sense, but the pop culture/meme sense. You know, like people who go around riding the blue trails and taking selfies to promote the brand they get x% discount on. Where the target audience is other novice riders who just like to hang out with their friends, rip a couple green/blue trails, then post pictures of the beer/food at the resort lol.

Which is cool if that's your demographic, but I don't like it.

FuzzyL (Dec 30, 2020 at 8:19)
Those are so ugly, they really should have a motor. But the riding was nice.
Below threshold threads are hidden

calarco68 (Dec 30, 2020 at 16:59)
Just sayin, Ive been editing video for 30yrs. your track (Nat sound pops) come before the video. Creating a audio bridge.
I had a hard time watching this. Its a mess. If your going to promote something at least have someone in the profession look at the segment.