Growing up and watching the New World Disorder and Anthill movies, I have dreamed of riding some of theses stunts for a long time!

Here we are 15 years later and Steve Vanderhoek is showing me some of the crazy lines. It's awesome to see what some of the freeride legends such as Andrew Shandro were doing back then.

This video was filmed a few hours before Steve Vanderhoek broke his wrist... and a few weeks before I broke my scapula. The team will back soon, don't worry!

Filmed and edited by Joel Clifton 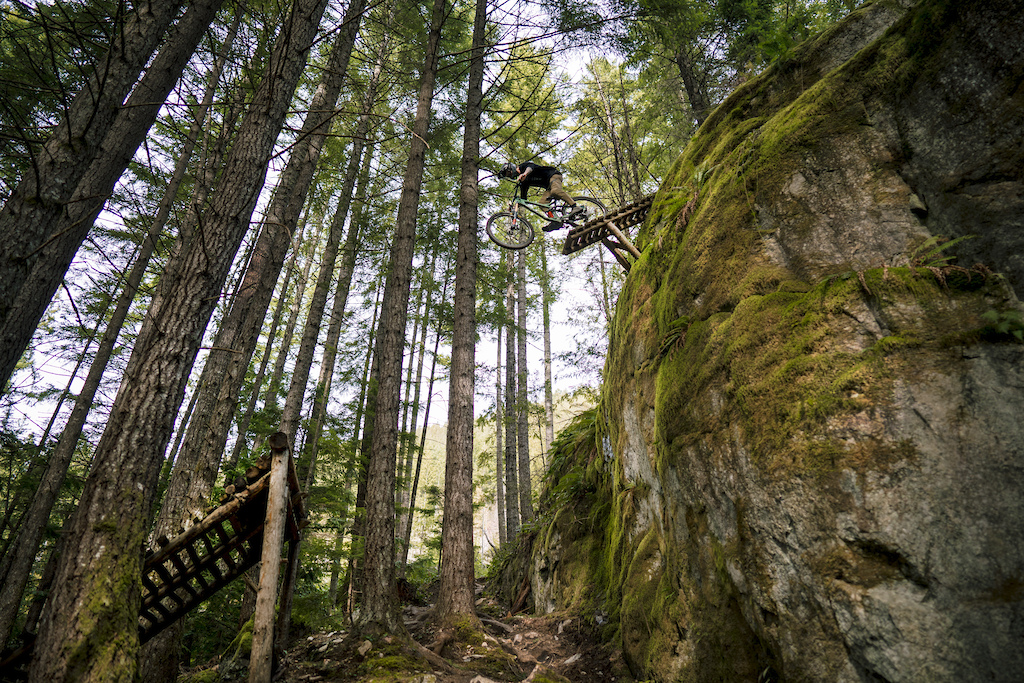 This message brought to you by Steve’s hair.

jmortstar (Sep 23, 2021 at 10:30)
Insane riding as always from these two. So fun to watch. And props to the builders of these features. Not only to have the cajones to build a sloped ramp off a cliff but to build them well enough to hold up over years of abuse.

synchro (Sep 23, 2021 at 19:58)
I'll be the guy to say both of those features look past their best before date and teetering on the brink of getting ready to ruin someone, maybe permanently. I think it's a bit irresponsible to have this up as it sends the wrong message to people who already don't know what they're doing in terms of building/riding stunts that aren't structurally sound.

CarbonShmarbon (Sep 23, 2021 at 21:20)
@synchro: I agree with your sentiment, but anyone who rocks up to a feature like this and has the skills and experience to give it a go will surely have a pretty good idea what they're looking at, structurally.

imbiker (Sep 24, 2021 at 2:25)
Think of the mtb's the trail builders were riding 15 years ago, and then riding features like this for the first time, that's insane.

JWadd (Sep 24, 2021 at 8:47)
Over a decade of PNW moisture exposure? I noticed he didn't even dare to even walk out on that sketchy ladder bridge.

synchro (Sep 24, 2021 at 10:40)
@CarbonShmarbon: you would hopefully think so yes. But, last I checked nobody has made any x-ray goggles to be able to see inside a piece of wood to check if it's rotten or not.

In the first stunt in the vid you can tell the rungs/slats are undersized with a couple being either broken or missing. The stringer or support for the ladder bridge, while a decent size, is not made of cedar and looks to be alder which rots out a lot faster. At the 1:16 point you can see that the stringer is deteriorated. Consider what might happen to a rider if that thing collapsed or some rungs broke while they were riding down it.

On the second drop. while it's made with cedar, the rungs are again undersized. Also, you can see the top ramp wobbling at the 7:14 mark when Vanderhoek hits it. Who knows how that thing is anchored. What do you think happens if it collapases or slide outs as a rider is trying to pop off of it in order to hit the landing?

I get that these things were made as one-offs for a vid so they were made with durability in mind, but if that's the case then maybe they should be taken down after. The concept of these stunts are cool, but construction wise they're not a great example of how things should be done if you want something to stand up to traffic and last.

CarbonShmarbon (Sep 24, 2021 at 20:57)
@synchro: Right, ok.
You can tell all of that from a video, but someone actually being there could not determine any of this without the aid of x-ray goggles. Got it.
Thanks for clearing that up.

synchro (Sep 26, 2021 at 14:56)
@CarbonShmarbon: There's enough evidence in the vid to suggest that the structures are suspect in terms of stability. The point about the x-ray goggles is that you can't be 100% sure with something like that, it might hold up break or it might break - you can't tell for sure. I'm not saying what they could determine, but they made a choice (risk) and it worked out for them. If they're comfortable with that risk that's their choice. My point is that I think this sort of thing sets a bad example - relatively speaking of course.

Arepiscopo (Sep 23, 2021 at 10:29)
Man, these videos are just incredible. Out in WNY we have nothing like this. I can't imagine what these features and the landscape in general looks like in person.

adrennan (Sep 23, 2021 at 11:22)
Go visit squamish and whistler if you ever get the chance. Totally recalibrated what I thought my skill level was.

Been snowboarding in Whistler a couple times and it was incredible. Some day I'll get back there in the summer to ride...

canow18 (Sep 24, 2021 at 8:07)
@Arepiscopo Is there anything in WNY?...my parents are back in Rochester but growing up I never saw any mountain bikes until I visited the Adirondacks.

Arepiscopo (Sep 24, 2021 at 8:41)
@canow18: Yes, we have a ton of stuff to ride. There are about 6 parks in and directly around Rochester and if you go into the finger lakes there are a few more that can get pretty technical. But nothing on the scale of what these guys are riding feature after feature. Our trails are a lot of punch, both up and down.

Arepiscopo (Sep 24, 2021 at 11:06)
@canow18: We have bigger climbs than 100' but not many. A lot of our trails are build on land that surrounds Irondequoit Bay which means steep and narrow. Move south and things spread out a little. Ontario County Park has some of the best riding within an hour of Rochester.