Video: The Struggles of a Downhill Racer From A Flat Country

Imagine being a young and ambitious racer. You’re on a winning run in a series you’re leading and the overall title is within reach. You can almost taste the next victory when, suddenly, a red flag pops up in the last corner. You hit the brakes and roll down slowly, just to find an empty track.

It happened to Tristan Botteram, a young Dutch downhill racer who killed his last season as a junior. He won the iXS Downhill Cup, finished second overall in the iXS European Cup, ended 4th at his first ever World Cup in La Bresse and 9th at World Champs in Lenzerheide, despite injuring his hand in practice.

His results are even more amazing considering he lives in the Netherlands. With roughly 35% of the country being reclaimed from the sea and below sea level, it's one of the flattest countries in the world. Flat roads equal easy pedaling so bicycles are a widely used mode of transport, but other than our rowdy commutes the Netherlands has nothing to offer for a downhill mountain biker.

As a result, Tristan hardly spends any time on his downhill bike outside the races. "It’s a three-hour drive to the closest downhill track in Winterberg (Germany), but because I don’t own a driver license yet I hardly ever go there. Besides, you can’t compare those tracks with a World Cup", he says. 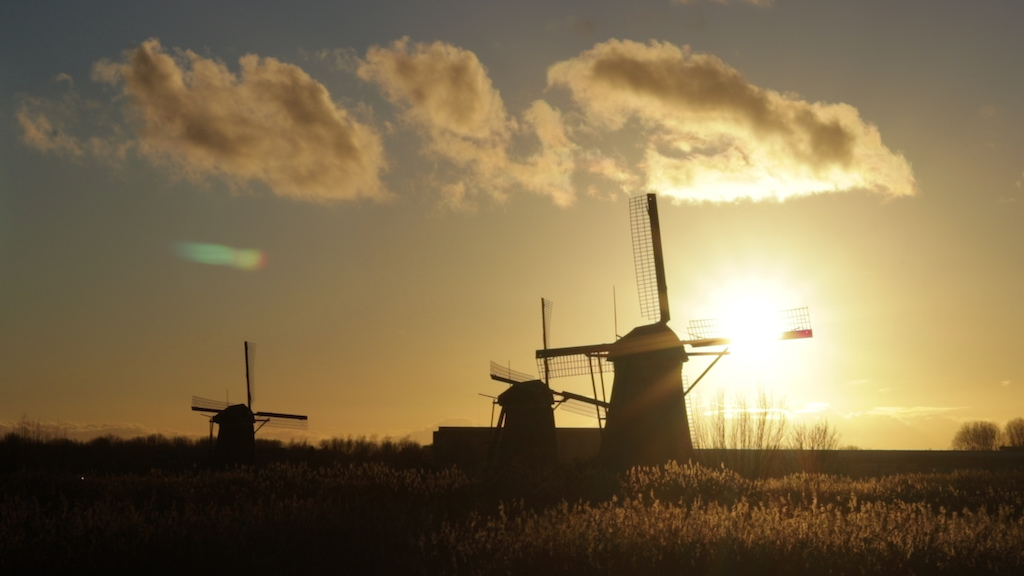 The Netherlands is the third flattest country in the world. Photo: Fine Line Media

Tristan’s dream of becoming a professional downhill racer started a few years ago. He originally wanted to follow in his father’s footsteps and race motocross, but it was considered too expensive and dangerous for him at a young age and so he started racing BMX.

While on vacation in Austria with his parents and older brother in August 2016 Tristan enrolled in two nearby downhill races, the IXS Rookies Cup and the International Rookies Championships, and ended 5th out of 105 participants in both events. Tristan: "I instantly loved it and that's when I knew, I want to race downhill bikes."

While Tristan used the offseason to get fitter and better, his dad bought a camper van and converted it into a fully equipped mobile garage to escort his son to the races. By the time the new season began they were fully prepared and as soon as they set off, medals came pouring in. 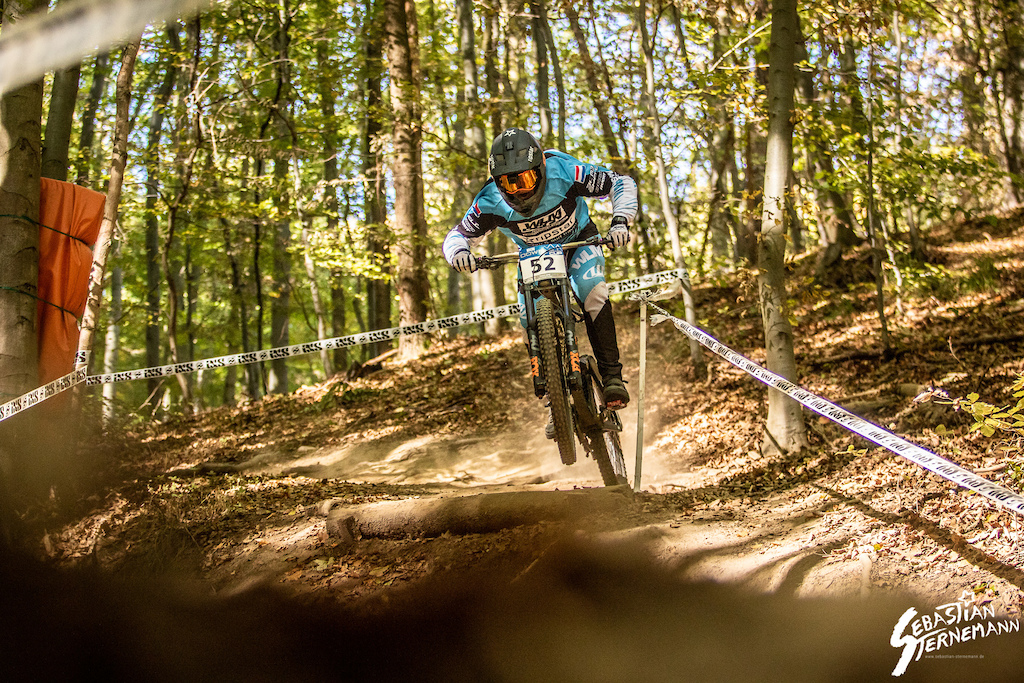 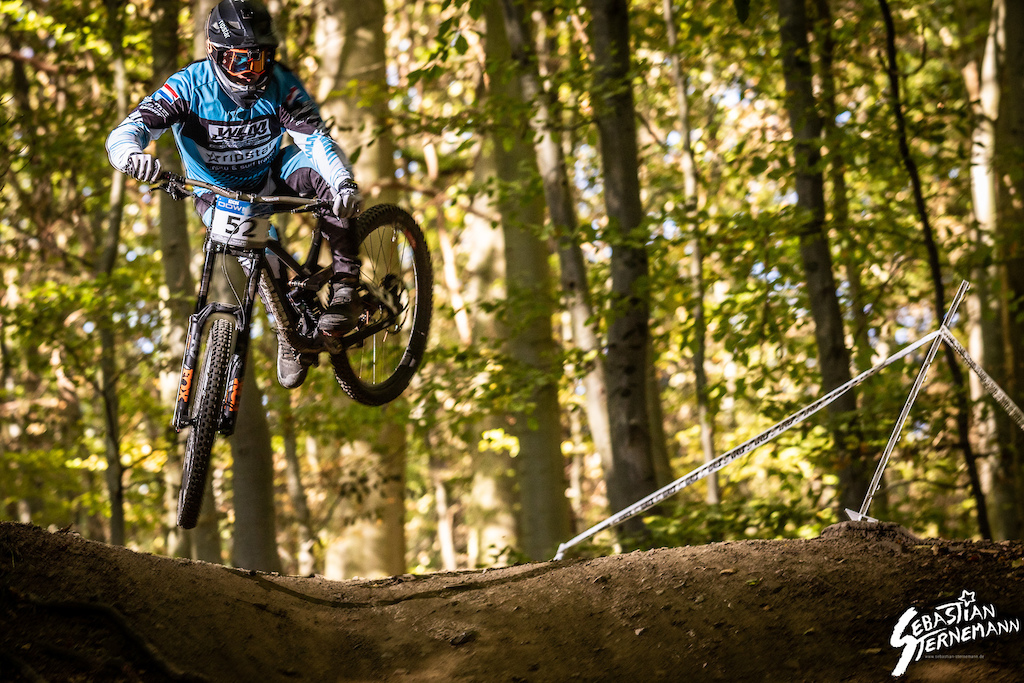 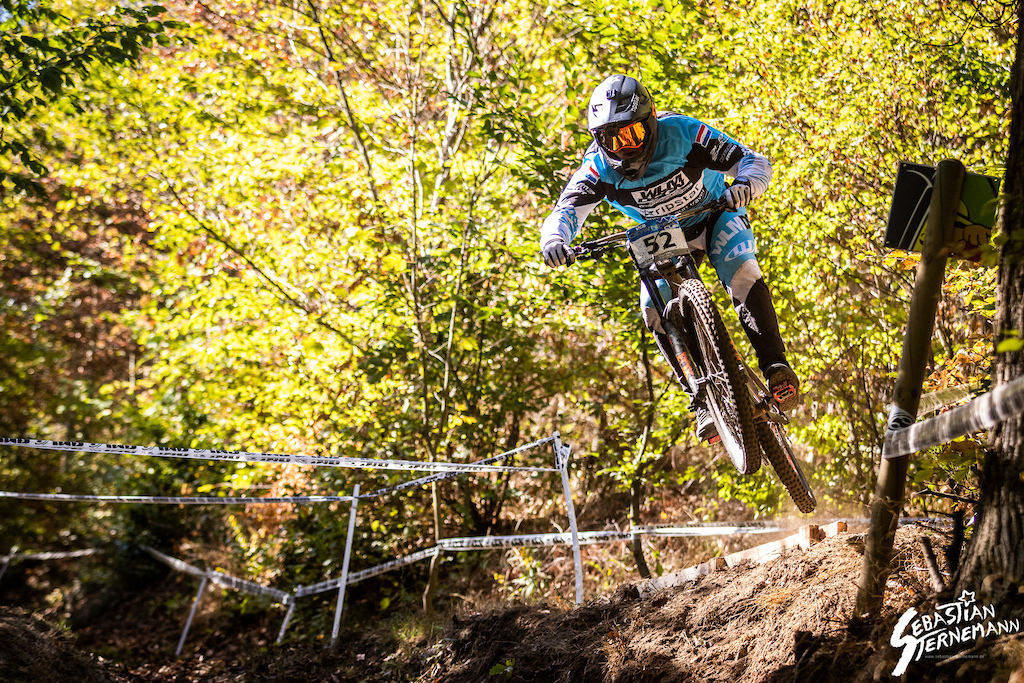 Tristan Botteram at the eighth round of the iXS Downhill Cup. Photo's: Sebastian Sternemann 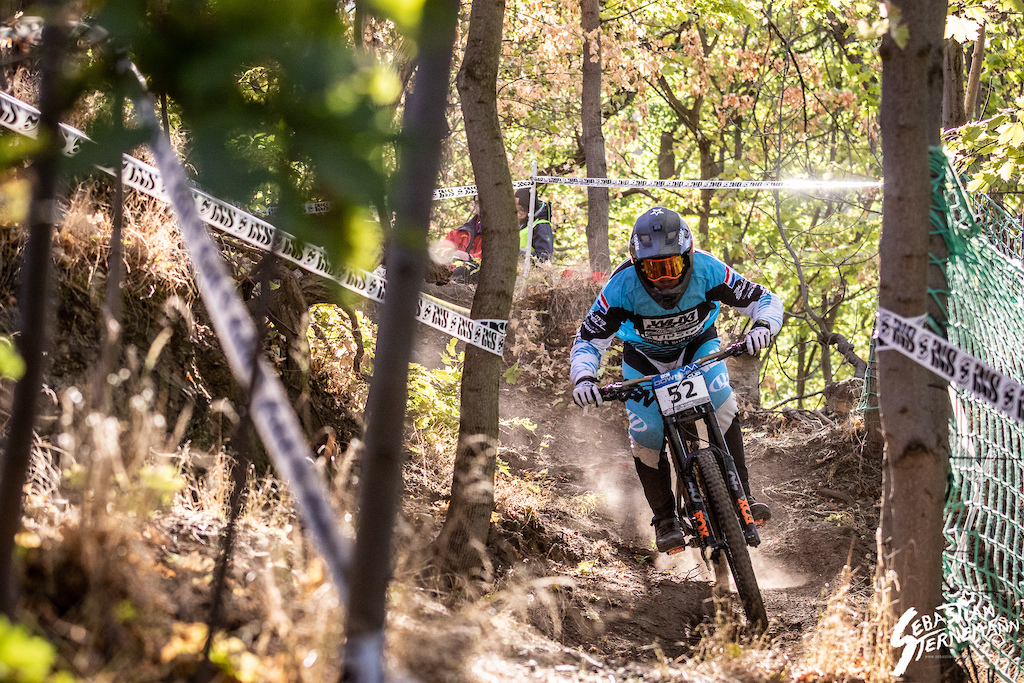 Back to the incident with the red flag. It happened at the second last race of the IXS Downhill Cup in Thale, Germany. Tristan was leading the series, but the overall outcome was far from decided yet. A win that day would put him firmly in the driver's seat.

The rider in front of Tristan had crashed on the wall ride just before the finish, but got straight up and was already over the finish line when Tristan was stopped by the red flag. Of course, safety first, but when you get stopped on "a really good run" and find an empty track, you're going to be a little frustrated either way.

Technically the track in Thale is not really demanding, but physically it is. About two thirds in there's a nasty uphill section that had been killing riders all weekend. With his legs still burning from his first run, Tristan feared he might not have the leg power to do it again. 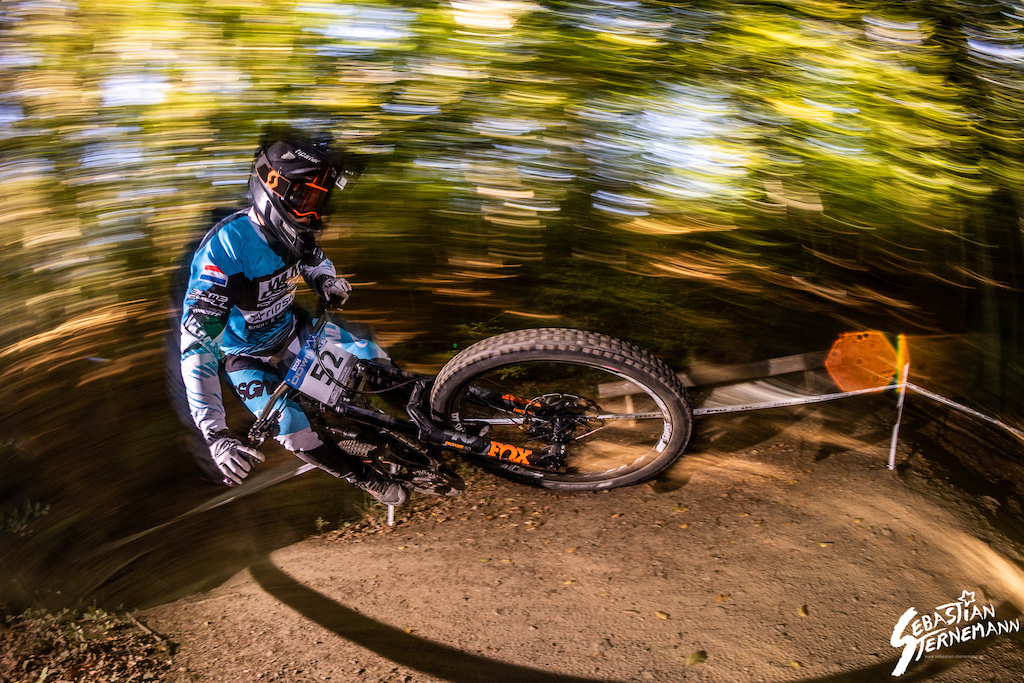 Photo: Sebastian Sternemann.
With hardly any time to regroup Tristan had to go straight back to the top and start immediately. While his mom and dad were anxiously watching the clock hoping he could pull it off, the commentators were pondering if a second run should be considered a pro or a con. They settled on it being a bit of both.

The fastest time of the day was a run of 3:40:004 and Tristan was in touch when he popped up on the screen that showed the last few turns of the track. His mother was cheering loudly as he blasted through the wall ride and sprinted towards the finish. "Look. At.The.Time!" downhill's favorite commentator would have shouted. Tristan beat the best run by a half second, which did not only earn him the top step in the Pro U19 class but also the second place in elite. 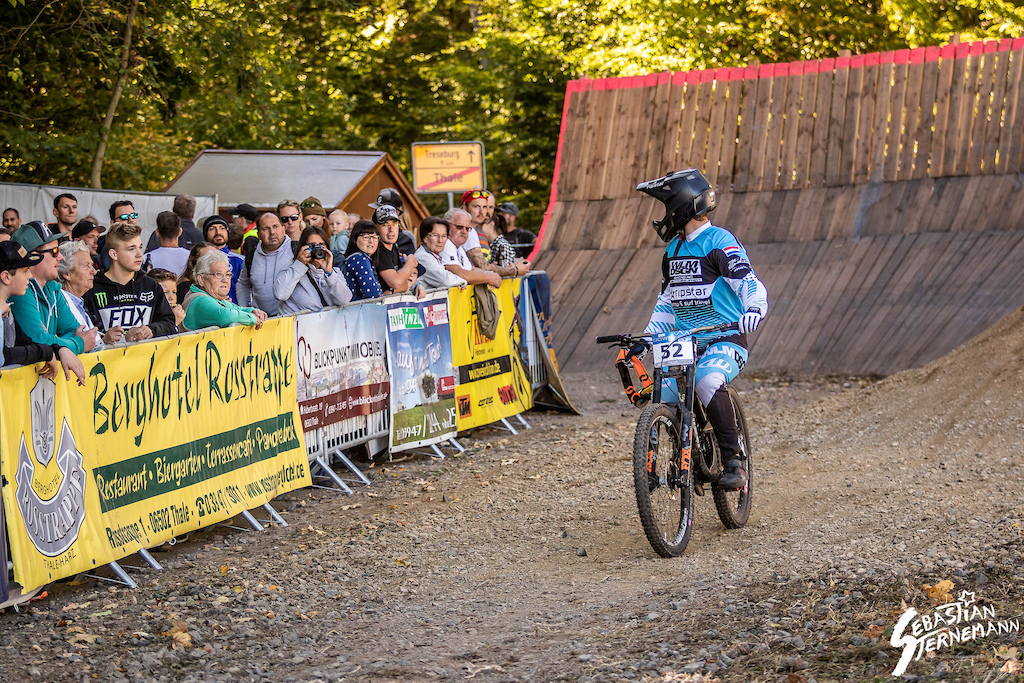 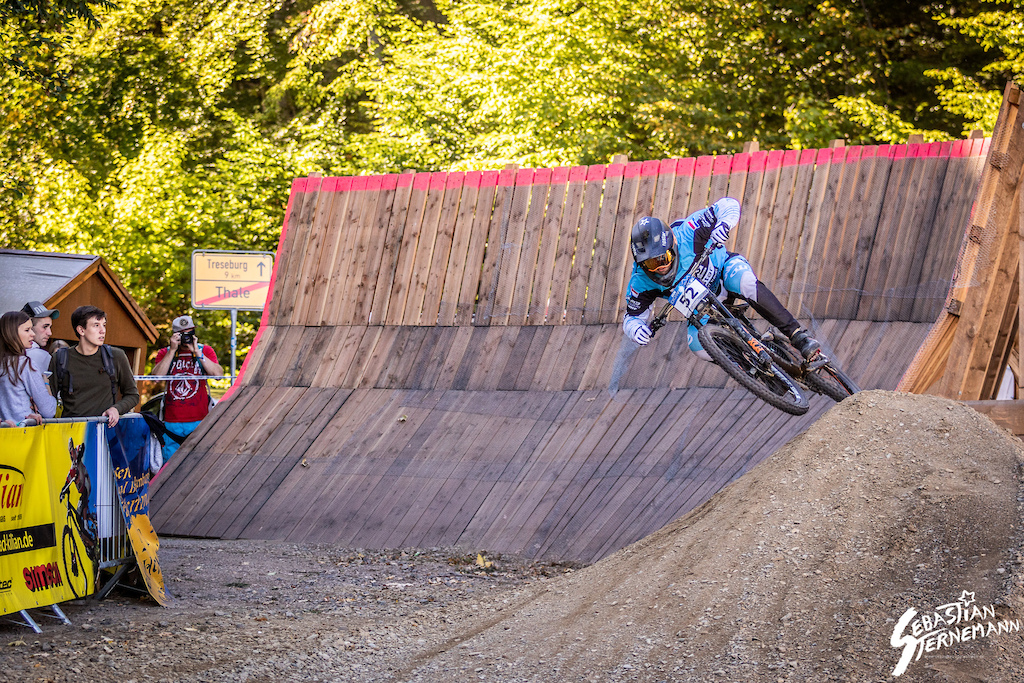 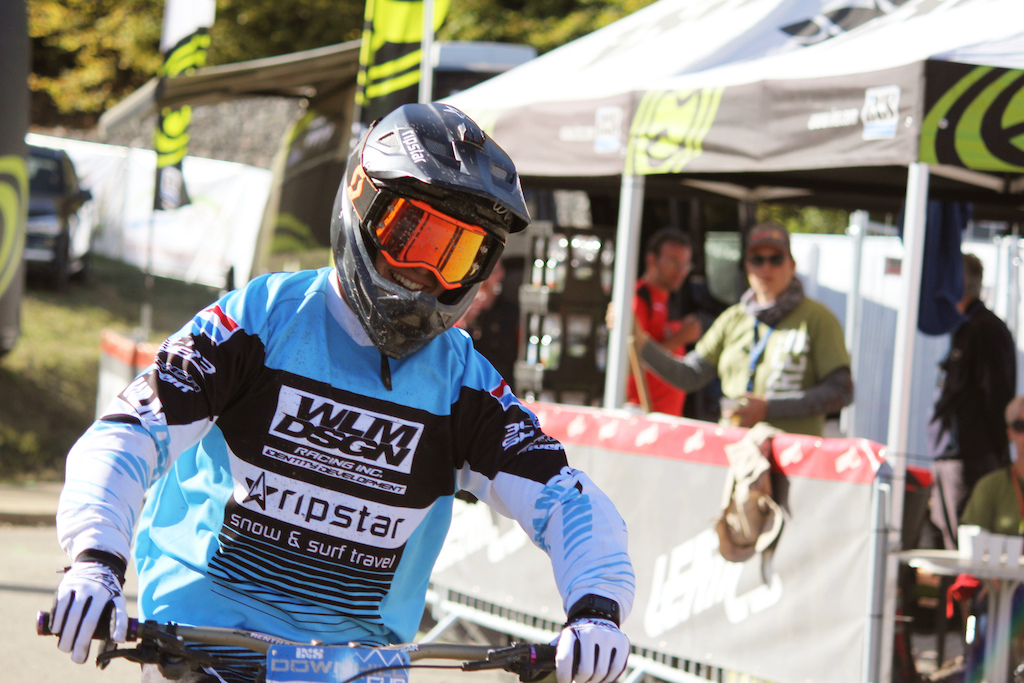 Nothing but smiles as Tristan lays down the fastest time in his second run. Photo: Anneke Botteram.
World Cups

Tristan's result is a big confidence boost as he just turned 18 and will move from juniors to men this season. "It definitely gives me a bit of extra hope to get more podiums", he says.

He will start the season riding the European cup, "but if it goes well and I'm blown away by my own riding like this year, I'll try to race the World Cup mid-season and see if I can qualify. I think that will be the biggest challenge because it's a new class and the speed is way different, but we'll see how it goes. There are other riders who just came from juniors and now ride top-20 in their race runs. I think it's all about your game plan and, of course, you have to be strong mentally as well."

Tristan's ultimate goal is to secure a spot on a factory team. "I'm always thinking of the bigger picture. Ever since I rode my first European Cup it's been my dream to win a race like that and this year I did that. Looking ahead, it would be amazing if I can race for a team and do this for a living, so I can hang out with my teammates and move to the mountains in like, Austria, or something.' 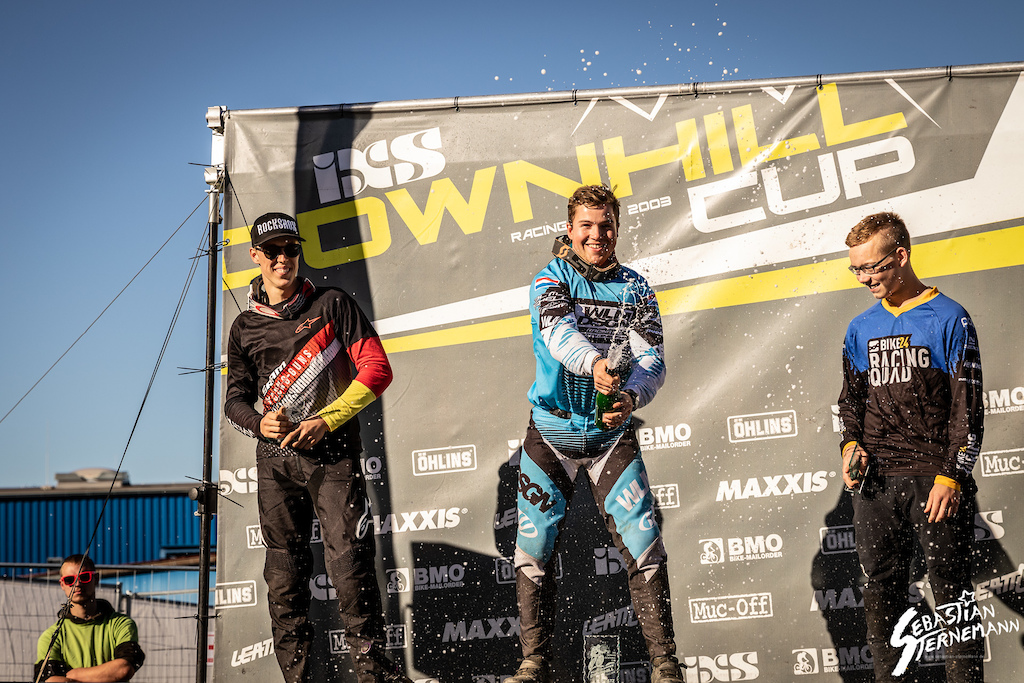 Will we see a Dutchie win a World Cup in the future? We just might. Photo: Sebastian Sternemann.

Joost Wichman and Jurg Meyer did pretty good to a couple years ago... ;-)

But yeah, Gerwin and Bas were some real pinners.

The Netherlands have some of the best BMXers in the world like many below say.. Put any one of 'em on a DH bike and they would probably give some of the top world cup guys a hard time....

Batipapo (Mar 9, 2019 at 10:08)
I love seeing parents like them. Just awesome to see parents making their kids dreams realized.

sieneke (Mar 9, 2019 at 10:56)
And how about our own Anneke Beerten? This awesome lady is still continuing to kill it in the mountain bike scene on just about very level and discipline possible.

vinay (Mar 9, 2019 at 12:47)
The BMX scene is strong. These past Worlds in Baku, the ladies swept the elite podium and got gold in juniors as well. Amidst much bigger countries like France, Australia and the USA I think they're doing quite well. Because of the terrain though, it is really hard to make it in gravity mountainbiking. Especially if you don't have a driving licence! 4X racing really used to be a great way to transfer from BMX to gravity MTB but it kind of died when UCI pulled the plug. On the other hand, BMX racing became Olympic so there is more support to pursue that on a high level. Or people move on to another discipline. I wouldn't be surprised if more than a few road, track or XC athletes have a background in BMX.

Bas de Bever has been the national BMX coach for a good while and obviously his team has been quite successful. He recently quit as he emotionally couldn't bear that (Olympic silver medalist) Jelle van Gorkom got severely injured in a stupid training accident and has his career cut short. He's left a very solid team and obviously I hope they'll continue to do well.

Once again this (very well done) video shows how important parents can be in this stage of an athletes career. I think this goes for pretty much all the greats in mountainbiking. And it is cool to see how grateful he is towards his parents. He seems to be loving it and I hope he manages to make his dream come true and can actually make a career in racing mountainbikes.

FineLine-Media (Mar 15, 2019 at 1:37)
@vinay: thanks Vinay! Really appreciate the feedback. Jelle’s accident was indeed a very sad one. He seems to be recovering well though, better than expected even. He’s also very down to earth about it, kinda like Paul Bas. Been inspiring to see how they both handle such a tough blow.

vinay (Mar 15, 2019 at 2:30)
@FineLine-Media: Yeah, Jelle seems like such a disciplined guy. He sets a goal and then just goes for it. Be it an Olympic medal or now "just" to return to normal life. Cool to hear he's still making great progress! The national BMX team seems like such a positive and tight knit group (including Anneke back when she was racing 4X) and I'm still disappointed Bas de Bever left. Though I get that it just proves how much he cares and how deeply it all touches him. I trust they'll keep doing well and getting kids inspired to hit the dirt despite the disproportionate attention road cycling, soccer and F1 racing are getting. The BMX team, Jeffrey Herlings, MvdP and hopefully Tristan Botteram, all good for another decade of successful racing.

FineLine-Media (Mar 21, 2019 at 2:57)
@vinay: 'The BMX team, Jeffrey Herlings, MvdP and hopefully Tristan Botteram, all good for another decade of successful racing.'

zoobab2 (Mar 12, 2019 at 16:17)
@bressti: where Martin Maes lives is moe east of Belgium. I am from the south :-) BTW our dutch friends used to have their DH champion during one of the DH1 races in Belgium, organised by my cousin, but he burned out last year to organise all those races, and again this year there are no downhill races in Belgium. Maybe next year who knows...

litespeed74 (Mar 9, 2019 at 14:11)
Not related to DH racing but I always found flatlanders to be super strong on the road, especially in wind. Flat roads and wind is by far the most dreaded combo on a road bike. You ride with someone that road that type of condition every day....they can definitely lay the hammer down.

BlackVR (Mar 9, 2019 at 16:00)
They apparently even have competitions in the Netherlands for cycling into headwinds. Look up "Tegenwindfietsen" on YouTube. It's pretty hilarious. Especially since they do it on commuter bikes.

Hope to hear that name a bit more in the future!

warntz (Mar 10, 2019 at 6:31)
Belgium has some flat parts, but the part where Vink and Maes come from is definitely not flat

The part where Nico lives is as flat as The Netherlands. Nico and I both have to drive at least 1-1/2 hour to get to “a decent hill”... Not even a mountain.