Video: We Tested Our Bike From The Future - The Grim Donut Part 2 [April Fools]

Getting to this point took countless long nights of bad decisions and the courage to ignore sound advice, all while knowing full-well that the industry will probably copy our game-changing design as soon as it was completed. Regardless, it's time for the next step: Testing the Grim Donut to see just how awesome it actually is. On a scale of one-to-awesome, we already know that it'll be awesome, but the challenge will be to quantify that awesomeness. And then put that number in our ad campaign so everyone knows how awesome it is.

In the second episode of the Grim Donut saga, we head to the mountains to find out if geometry from 2030 will even work in 2020. Miss part one, or has it been so long that you forgot what happened? Same here, but you can catch up by checking out the first episode. 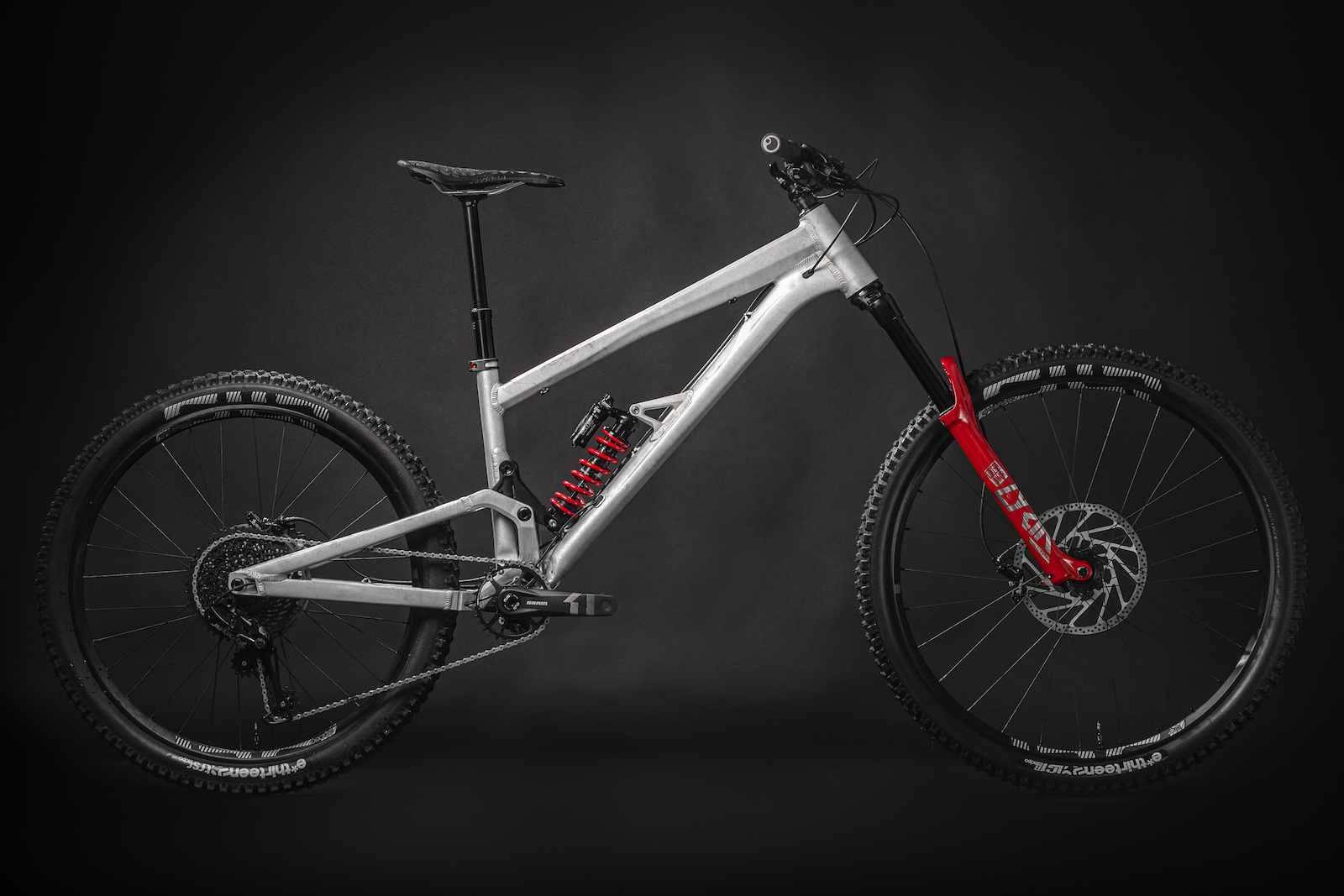 Hope you enjoy it and thanks for your patience!

lake-st (Apr 1, 2020 at 7:10)
Mike they make air bags for skiing and motorcycles, might be prudent to use for your Test rides, or find a test dummy.

I saw it was 15 minutes long, and was just settling in, excited to hear the story. BAM - hopes were crushed.

vinay (Apr 1, 2020 at 7:58) (Below Threshold)
@tomhoward379: I don't know who Buzz Killington is but I do know what day it is. For months people have been hijacking the comment section calling for the Grim Donut review. Then on April 1st PB publishes this article claiming it is about the Grim Donut. I'm not falling for that, I won't click the video, hah! I see you all fell for it and are encouraging me everyone to dive in too in order to not be the only one who got fooled. But I won't, no I won't. I've been on PB for long enough to realize that they just had to create this joke for all the hungry visitors to catch the bait. You did, Í won't.

Don't even bother arguing with me. I'm the one with the tinfoil hat here, you'll never beat me.

you have got all of us. Bravo!

DaMilkyBarKid (Apr 1, 2020 at 8:56)
Don't take this the wrong way but you absolute bastard!!!!! I'd specifically made a fresh cup of tea and opened the special chocolate digestives just to watch this.

RoadStain (Apr 1, 2020 at 8:57) (Below Threshold)
For "Not being the time to ride" trails near me SURE are busy. More so, tons of families out in the neighborhood on rides as well. I would guess 20% of the neighborhood riders have helmets (at any age). Current record is a guy with a kid on the back in a child seat, another kid on the top tube child seat...three riders, one bike, no helmets.

Simply, not my business (nor any other persons). But, if I am going to get infected (well, I am in medical facilities every day)....sure as hell not going to not ride. Not in my final days.

mkotowski1 (Apr 1, 2020 at 9:07)
my guess is they filmed this the day before the head tube snapped after riding off a curb, now there will never beeeee footage!!!

cky78 (Apr 1, 2020 at 9:12)
Considering the first video came out two months ago, and considering you would have been riding the GD well before that I call BS on the C19 excuse. In fact since the actual riding of the GD would have been weeeeeeeks ago, and we've all had A LOT of free time on our hands, I say something bigger is at work here.... Just my thoughts

gotohe11carolina (Apr 1, 2020 at 9:28)
@unrooted: specialized In cooperation with the deep state has now built something similar, patented it, and are now suing for ip infringement....

ridesingletrack (Apr 1, 2020 at 10:18)
Well played, dude. Needed Ferris Bueller at the end. You're still here? It's over. Go home. www.youtube.com/watch?v=T1XgFsitnQw

vinay (Apr 1, 2020 at 12:35)
@jfcarrier: Oh wait, this is actually an April fools joke? I was kidding and insisted on not watching it today, but I'll check it tomorrow. If it is, I finally get what the downvotes are all about

Lankycrank (Apr 1, 2020 at 13:18)
@cky78: I have two competing hypotheses.
1) It failed catastrophically on the first test ride, they had to scramble to get a new one made with reinforced frame which took 2 months to arrive.
2) First test ride immediately proved this is the ultimate, best bike that ever existed, so they had to scramble to get international patent protection and an investor to fund the first batch of 5000 ordered units.

LaurensVR (Apr 1, 2020 at 7:17)
Carole Baskin was forced by the deep state so people would stop talking about how Eptein didn't kill himself. Wake up!

TheR (Apr 1, 2020 at 9:29)
@mikelevy: Hard to write this without coming across as sarcastic, but I mean it: This was good. Really good. A trolling masterpiece.

Way to go guys! It put a smile on my face.

waffleShirt (Apr 1, 2020 at 7:19)
Dammit Levy, the internet is a finite resource! You can't be wasting megabytes on all those blank frames. That's like 13 minutes of cats that will never be able to exist now. And in the absence of the Grim Donut, cats is all that a lot of people have to get them through antisocial distancing!

ajreed (Apr 1, 2020 at 8:05)
I don't know... With all the deepfakes out there, I'm going to need more proof that wasn't Levy's face superimposed on Kazimer's body. I still think Levy died when the headtube snapped.

fullendurbro (Apr 1, 2020 at 9:07)
When it said "April Fools" I thought that the April Fools was them telling us that the video wasn't ready. So I was relieved that there was still 14 minutes of video coming. I stared at a black screen for 20 seconds before it hit me.

showmethemountains (Apr 1, 2020 at 9:10)
This bike is so low that I ordered mine with welded foot rests to use it as a push bike. The ultimate solution to pedal kickback and pedal strikes... is to not have pedals. All the kids are going to be so jealous of my Grim Strider

lou-talks-mtb (Apr 1, 2020 at 7:50)
wondering if anyone watched the whole video - this was left on the second monitor while i was gaming i didn't reach to the other tablet - they actually had a link hidden in the video - tinyurl.com/dymbb3a

CurtisLeblanc (Apr 1, 2020 at 7:48)
You forgot to change the offset to compensate for the slack head angle! What you can do it drop the fork lowers and turn the crown steer unit around and install them backwards. That will give you a negative offset ????

Fix-the-Spade (Apr 1, 2020 at 8:22)
@brianpark: But is a Manitou mounted backwards actually forwards or backwards backwards?

jaymachine (Apr 1, 2020 at 9:02)
The best part about the grim donut are all the facebook comments arguing over head tube angles and taking this bike 100% seriously.
Pure comedy in a time of need, Thank You!

DennisVV (Apr 1, 2020 at 9:23)
just told my daughter asking to help with homework to bug off for 15 minutes. Settled with nice coffee....then aaauugg

Narro2 (Apr 1, 2020 at 15:51)
I actually believe it is a good looking bike, now, i understand they designed it with a long chainstay to make the bike stable at high speeds, but.... i think they achived that with the long wheelbase altogether, i would've made a very short chainstay to make it poppier you know, easy to jump with, the bike would still have a long wheelbase due to the slack headtube angle, and the bike would still "be" stable at high speeds

ReformedRoadie (Apr 1, 2020 at 7:15)
It feels like a combination of getting Rick Rolled and yard sale'ing so fast you don't know what the hell happened...

zanda23 (Apr 1, 2020 at 9:40)
Good one pb. My one issue is that you used the virus as a reason that testing could not go on. Are you saying that since the fall (when the trail scene in episode one was presumably recorded) there has been no time to record this? despite the fact that levy was filmed dropping into trail suggests that there could have been ample time to film this in the months before the virus incapacitated us three weeks ago.

brianpark Mod (Apr 1, 2020 at 9:50)
Being serious for a moment, yes we've captured a few days of testing footage since we released Episode 1, but it takes a lot more work than people might think to make one of these. We also had winter here, and the team went to Sedona to ride value bikes early in the season, so there wasn't a ton of time before things got weird.

The Grim Donut deserves us doing the best job possible on EP2. Thanks for your patience.

Roman1234 (Apr 1, 2020 at 12:33)
Saw that part 2 was out on PinkBike's Instagram post. I have been looking forward to watching this so I set up my computer and got a bag of chips so that the video would be more enjoyable. Then this... wow

MorbidlyObeseKoala (Apr 1, 2020 at 12:43)
WOW. I read the comments first and I was thinking the whole project was a set up for April fools. That would have been one hell of a prank

Roguee (Apr 1, 2020 at 16:53)
Do you think the forks can withstand the forces from the head angle being that slack? I would imagine the bushings would give up quickly

benjamin-s (Apr 1, 2020 at 8:17)
Can someone please clarify the meaning of "dick pound"? Sure, some a*shole will probably respond with "dick pound", but for those of us that went to college, and can actually use grammar and punctuation...will someone please enlighten me?

gomeeker (Apr 1, 2020 at 8:27)
Its taken so long that Specialized has patented the Donut, soon to be released as the EndureO!

Anyone else think Mike Levy looks a bit like a Session?

rayme (Apr 1, 2020 at 9:44)
I now realize that this whole Grim Donut thing was just the build up to one of the biggest april fools in history. well played!

huntingbears (Apr 1, 2020 at 11:18)
And when part 2 is finally released, you'll see tiny figures pounding corn, laying strips of venison on the empty car pool lane of some abandoned superhighway.

littleskull99 (Apr 1, 2020 at 11:45)
I think this has been strung out till April fools day. See you for part three. (It needed three parts due to the wheelbase)

Tasso75 (Apr 1, 2020 at 8:03)
This fills me with the urge of killing all April fools pranks with eterocatalytic thermonuclear fusion .

lastminutetech (Apr 1, 2020 at 12:04)
Part of me thinks that was a Tim Hortons product placement commercial. Boycott Restaurant Brands International!!

brianpark Mod (Apr 1, 2020 at 13:15)
...? Ad dollars never have any impact on our technical editorial's product recommendations. Also, Norco won bike of the year this year.

Keoke (Apr 1, 2020 at 7:45)
Everyone unfollow pink bike on all social media platforms. Make them pay for insulting us.

Cheddar420 (Apr 1, 2020 at 7:23)
Now is definitely the time to make jokes at the expense of others, while everyone is trapped in their homes desperate for something to do.

I am inclined to suggest PB has better things to do with it´s time.... but we all know that´s not true.

phops (Apr 1, 2020 at 9:51)
Why is everyone so excited for the actual review? Just go look at the review for Pole Stamina 180, which is the best bike you can buy right now hands down (and that is not an April fools joke, if you don't think so then you either don't ride hard enough or don't know enough about bikes)

And before anyone comments on the broken chainstay, it was the Stamina 140 that did that, not the 180.