Video: The KHS Pro Team Take on the 2021 US National DH Championships 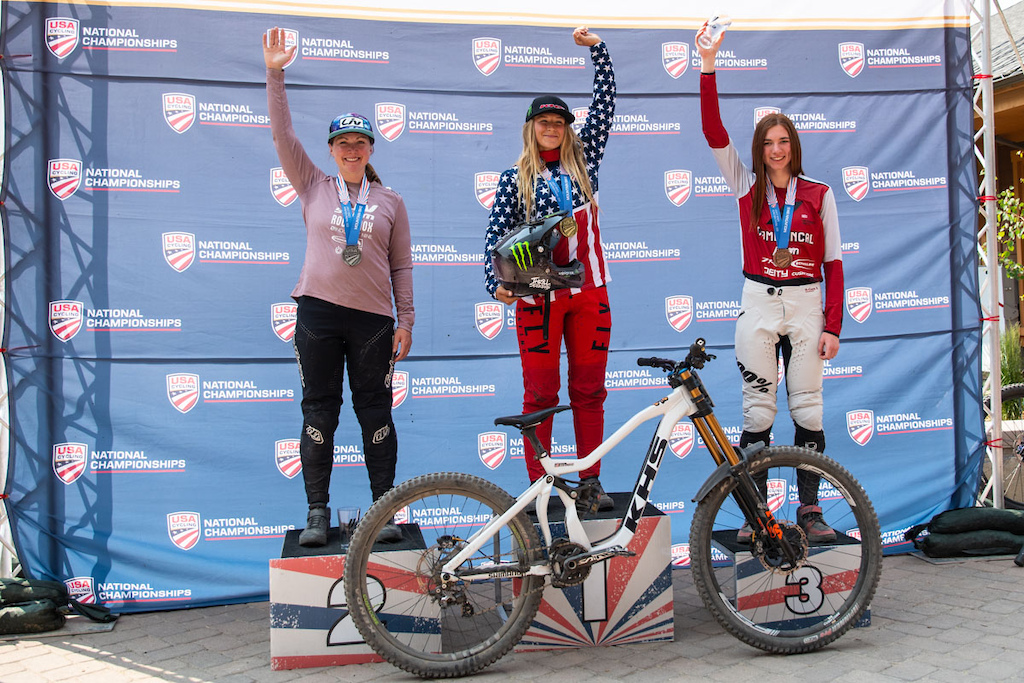 Kailey Skelton, Nik Nestoroff and Steven Walton would be competing in the Downhill category to try their best and claim victory and hold the national title throughout the 2021 season. The national title would consist of being the best racer on the mountain against the best American athletes. It is a very pristine title and each rider only has one shot at it each year. With that title it holds a lot of pressure to be victorious at other races like world championships and other national events that require each national champion to wear an American Stars & Stripes sleeve representing their title. 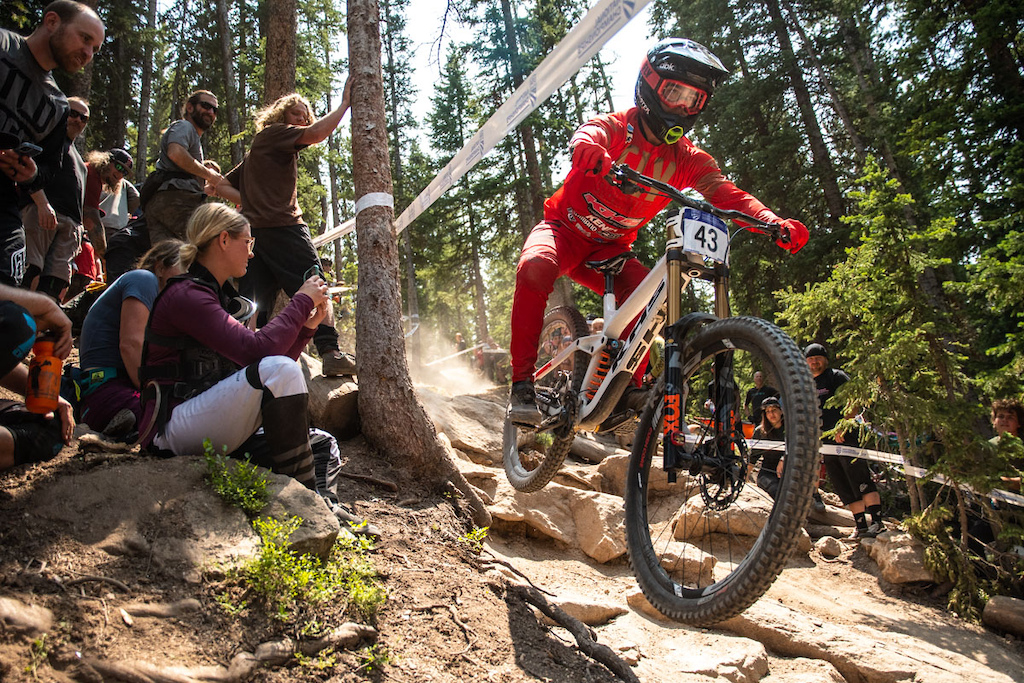 The KHS Pro MTB team arrived Tuesday evening to prepare themselves all the way for Sunday’s finals with that said Wednesday would be a day for track walk and also a day for acclimating for the high altitude in the Rocky Mountains. Not only is the base of the team pits located at 9000 feet, but the top of the downhill start was located over 12,000 feet in the pinnacle of the Colorado, Rocky Mountains. 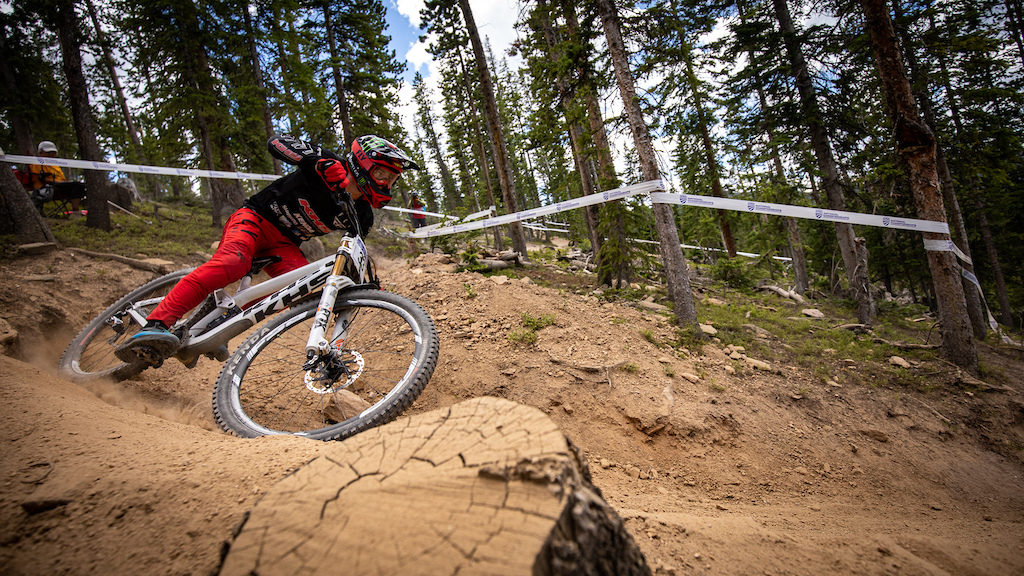 Wednesday would consist of a great track walk with all the American downhill racers both male and female collaborating together to do one track walk together. It was very cool to see every competitor on the hill from all over the country join together and help each other out on the track walk. There were great vibes happening on the mountain for their first looks and glances at the track they would be competing on for the national title. 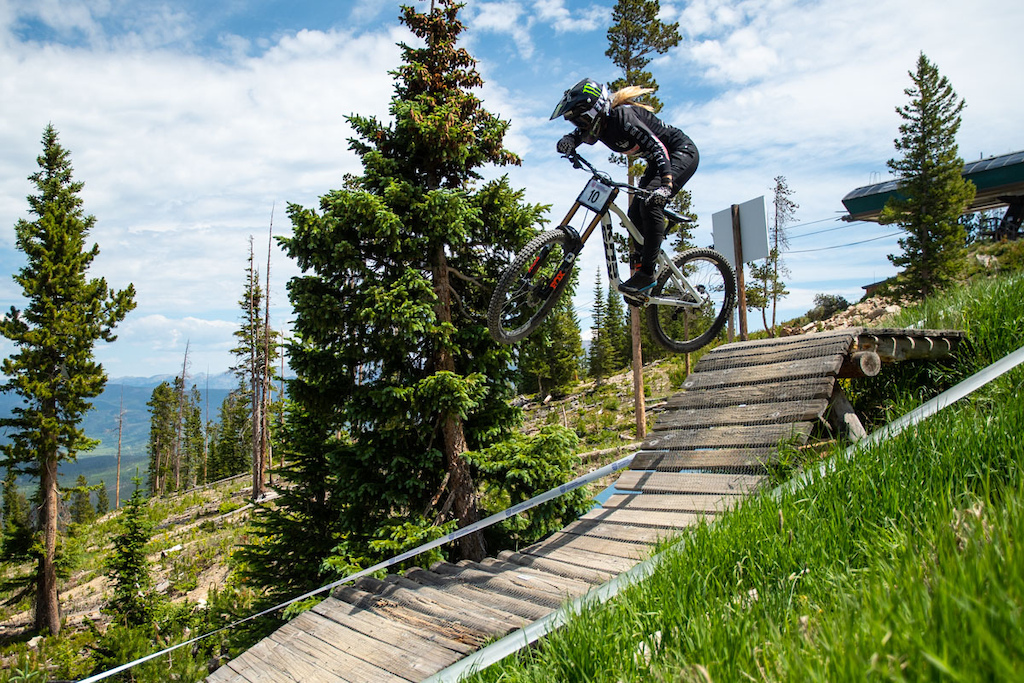 After the team's successful track walk it would go into their first day of practice on Thursday afternoon. It consisted of a three-hour practice with many riders and a long gondola lift ride to the top of the Rocky Mountain track. Practice went very well for all athletes. They were all acclimating to the high altitude and dry terrain. Steven Walton and Nik Nestoroff were coming off of the World Cup in Europe which was very muddy and quite different terrain compared to this national championship race. Also, Friday consisted of another great day of practice with only a three-hour session which would allow each team to focus on their athletes and adjust what needed to be adjusted to the harsh demanding terrain on their bikes and equipment. 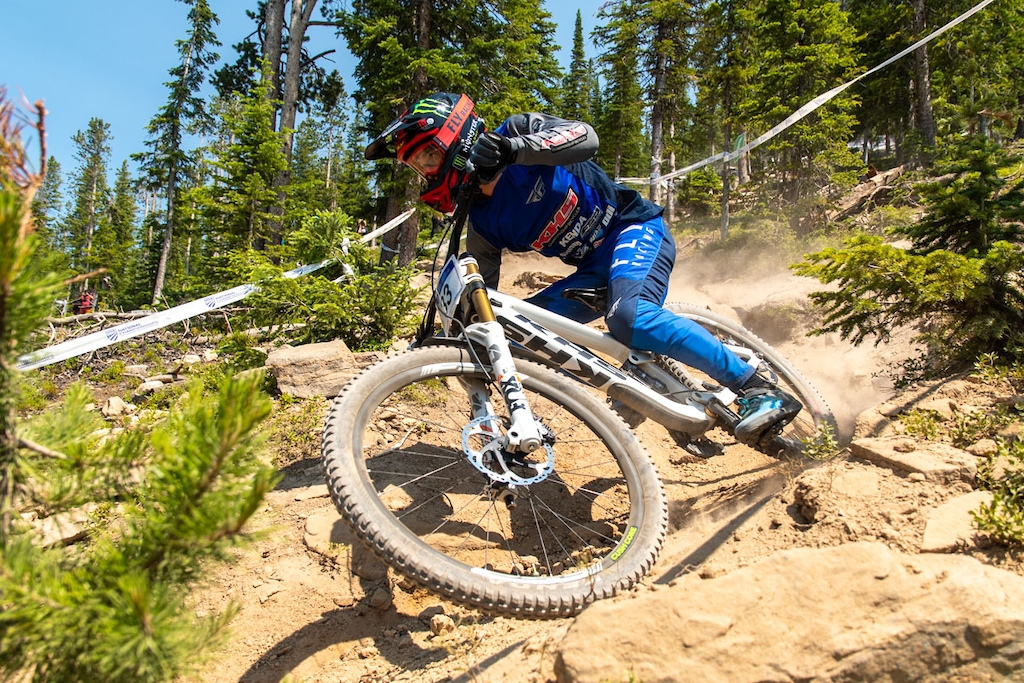 All three athletes would be making drastic changes with their suspension tire and overall bike set up to accommodate their needs and make them feel as comfortable as possible for Saturday’s qualifying and seeding event that consists of a full-timed run from USA cycling‘s official timekeepers. Once Saturday rolled around the pressure was on for qualification and seeding. The athletes all went to work after countless days of practicing tuning, learning and focusing on their final goals of winning. It would be Kailey Skelton in the professional Downhill Women’s category who would qualify first! Nik Nestoroff would qualify 7th and Steven Walton would qualify 12th. 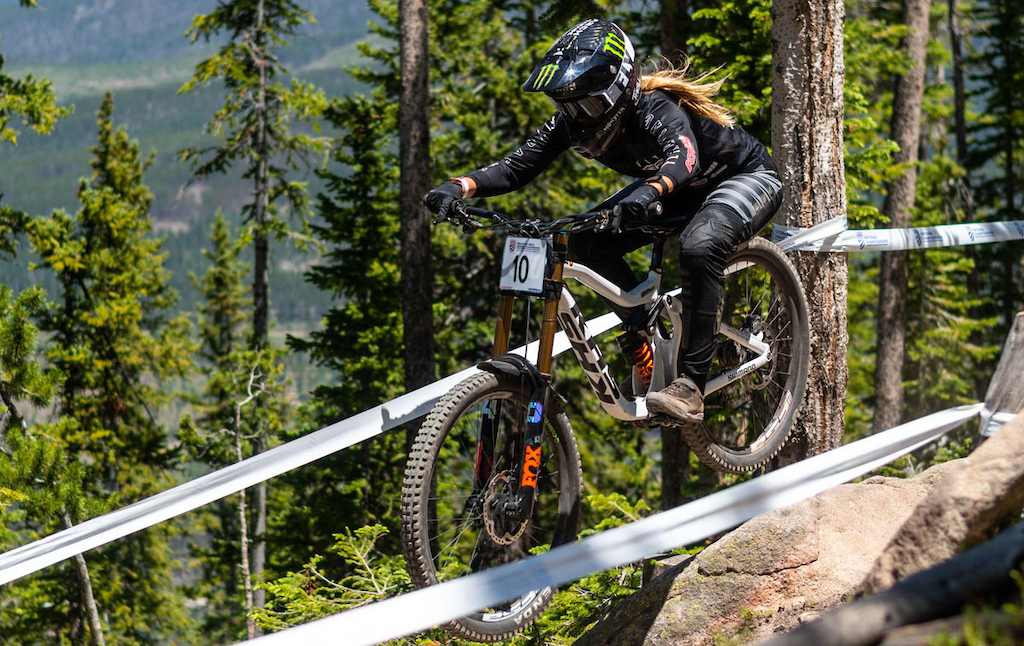 After qualifications, all athletes would be reviewing their setups and discussing team tactics to get them on top of the podium for Sunday’s finals. Also they would be reviewing video footage and trying their best to get prepared for the final race run on Sunday. Final adjustments would be done after qualification from the team mechanics and the riders input. Sunday morning would come quickly with high pressure on each athlete which obviously they had great expectations to do their best in their final race run. Each athlete would only get one or two practice runs to warm themselves up and make sure they were flowing for their final run. 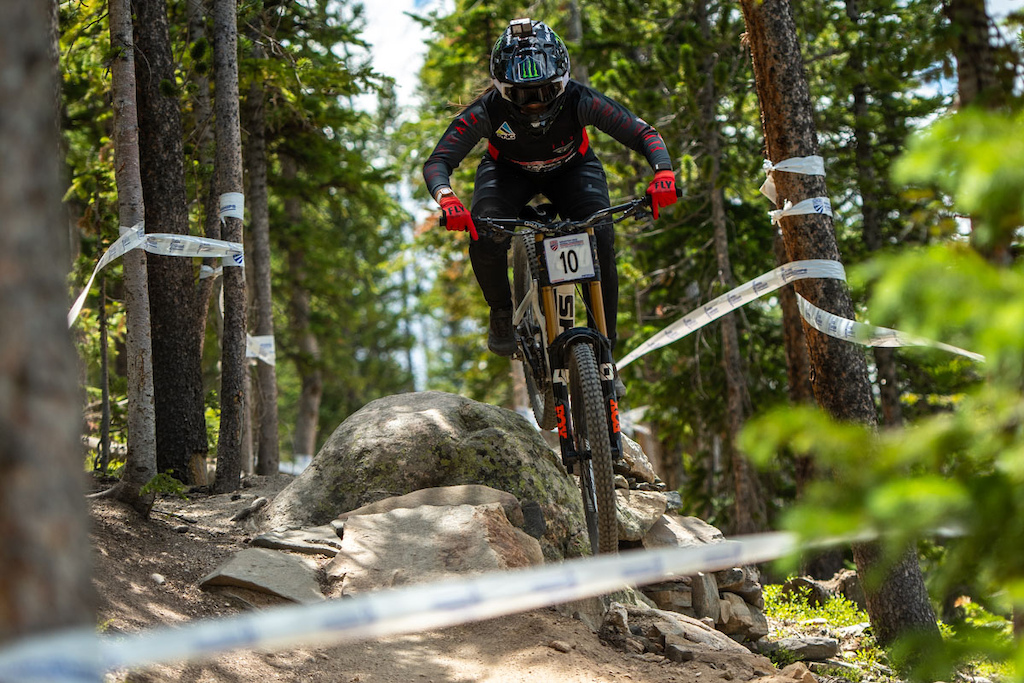 First to drop would be Steven Walton who was struggling from a little bit of altitude sickness and some arm pump, but would ultimately be able to push through the finish line with a top 15 result. Next to drop in would be Nik Nestoroff who would have a blistering run and only be a few seconds off podium position with a sixth-place finish, an overall great run and very respected among the best.

The highlight of the weekend would be Kailey Skelton who would drop into a race run focused, determined and eager to cross the line with limited mistakes. Kailey had an amazing run from top to bottom. She did her best and would really exert herself physically and mentally to push as hard as she could. When she crossed the finish line it was huge cheers from the fans family and the announcer. Once she gained her bearings and could focus on herself from her tunnel vision race run she would hear over the announcement that she had just won her first title by 12 seconds over second-place claiming the 2021 U.S national championship title. 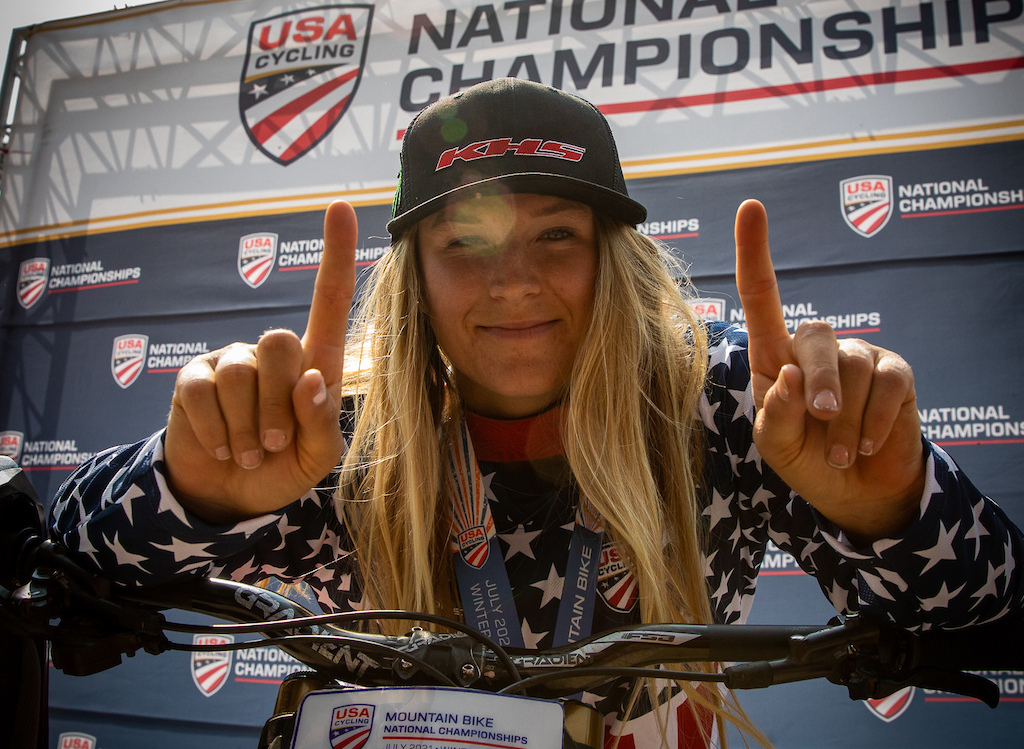 Kailey and all the athletes, team members and team managers were beyond stoked. The entire team put effortless amounts of time and dedication into getting this title. Everyone was beyond stoked that KHS Bicycles had claimed their 2021 title with over a decade of their last title being claimed in 2011 by Logan Binggeli. After the victorious race run and podium, the team would be celebrating Sunday night's dinner and congratulating Kailey and her first national title.

Once again KHS Pro MTB wants to thank all their fans, family and sponsors for countless dedication and help throughout the season. All the athletes will have a one week break until heading up to Big Sky, Montana for the big mountain Enduro series. Everyone is very excited to get up in the Montana mountains and test their skills back into stage racing with one of the biggest Enduro races of the year. We’ll see you next time between the tape!

MTBLegend92 (Jul 16, 2021 at 6:43)
Why does the article read like it was written by a Chinese bot that knows absolutely nothing about the riders or downhill racing?

shredddr (Jul 16, 2021 at 9:48)
@lbro23: I never quite understand this brand. It IS a catalog frame brand yes? They seem to have a decent following in SoCal, but I never see them anywhere else. Looking at that suspension, I wonder if anyone has alerted Dave Weagle. He might want to sue them.

lbro23 (Jul 16, 2021 at 10:00)
@shredddr: Yeah I don't quite understand them either. I believe they are mostly a catalog frame brand nowadays but used to be big in the sport. I'm not quite sure why they've started this big racing effort, it doesn't seem to be to sell or test bikes like most factory teams considering half of them are running sessions, and the other half are running the Walmart abomination.
So at the end of the day, perhaps someone in the company just has a passion for the sport and wants to support awesome riders. I'd say I'm a fan of that, although I'd still never buy a bike from them...

shredddr (Jul 16, 2021 at 12:08)
@lbro23: yeah, just poked around on their website. they have tandems! and cargo trikes! folding bikes! anyway, I tried to learn a little more and their website mostly crashes if you navigate outside the usual areas. it has a bit of a feel of a factory run brand. I also noticed a good number of their bikes seem to be the same as the illustrious Motobecane brand of bikes...

bmxsnox (Jul 16, 2021 at 12:31)
@lbro23: Look a little closer at those frames the men were riding. The standard "Looks like a Session" comment is an understatement in this case.

thetoro (Jul 16, 2021 at 13:49)
@loganbinggeli: don´t worry we appreciate it, good effort. keyboard bashers just looking for those plus arrows.

brooklyn1 (Jul 17, 2021 at 22:48)
@lbro23: Its called MARKETING....DH racing isn't just to sell DH bikes. Look up the number of complete DH bikes sold in the U.S. by bike shops. It's next to nothing. It's all done to sell the brand and everything else they make. Look at NASCAR, all done to promote brands/models of cars, tires, motor oil etc.. that the average consumer can buy.

tstep3 (Jul 16, 2021 at 10:11)
KHS is more than just a bike brand, they’re a large distributor of parts here in the states as well. If you’ve ever bought something from a shop in the US, there’s a good chance your money has gone to KHS at some point.

Also, they’re doing more for downhill racing in the states than any other company. It’s cool to see a company actually treat their riders well, and make sure they can focus on doing their job of racing instead of working another job to race.

loganbinggeli Plus (Jul 16, 2021 at 12:20)
Besides the writing and leaving all the politics at the front door, that was a dam good edit!!! Just saying. Also our team website KHSPROMTB.com is worth checking out! Cheers see everyone on the trials!

Rileyplummer (Jul 16, 2021 at 10:38)
I dont get the hate. Their riders are clearly talented. There bike are great looking. I don't think they are actually rebranded sessions and if they are maybe they are going to work on a new dh bike soon. The website needs an update though for sure.

Civicowner (Jul 16, 2021 at 7:56)
Some of their riders are on rebranded Sessions. Also their enduro riders have rebranded Specialized Enduros

Ashe14 (Jul 20, 2021 at 4:30)
I have khs carbon fork on my fatbike and it is so flexy my rotor rubs when cornering. Thing is on the verge of snapping and causing me to lose teeth. Will 100% be replacing it before the snow hits this year.