It had been a dangerously long time since I last raced. The Whistler EWS in 2019 was my last outing. Like everyone, I've spent the last two years coming to terms with the fact that you can plan all you like in the current climate, but be ready to throw those plans out the window. This weekend went exactly that way.

Thanks to the legends at Outdoorsy, who arranged for me to hire a RV or trailer and take on two challenges this year. You might've seen my attempt to ride 100 trails in Cumberland on the hottest day of the year. I thought another genius challenge would be to hire a full blown team bus and head off to race my first Enduro race in two years. It would be just like being on a pro team. Right?

Usually for a race weekend, I'd team up with some mates, set up camp in the car park in my dangerously dodgy Ford E-250 (aka 'The Beast') and have a great time from there. When I found the H.M.C.L.S. (Her Majesty's Canadian Land Ship) Fiona on Outdoorsy however, I knew she was the one and immediately pulled trigger. How good would sleeping in a bus that's bigger than my apartment be before my first race in two years?

What I didn't think about was the administration involved navigating a 36-foot, 10-tonne land ship, 1000 kilometres east from Vancouver into the Canadian Rockies and to Panorama Ski Resort... 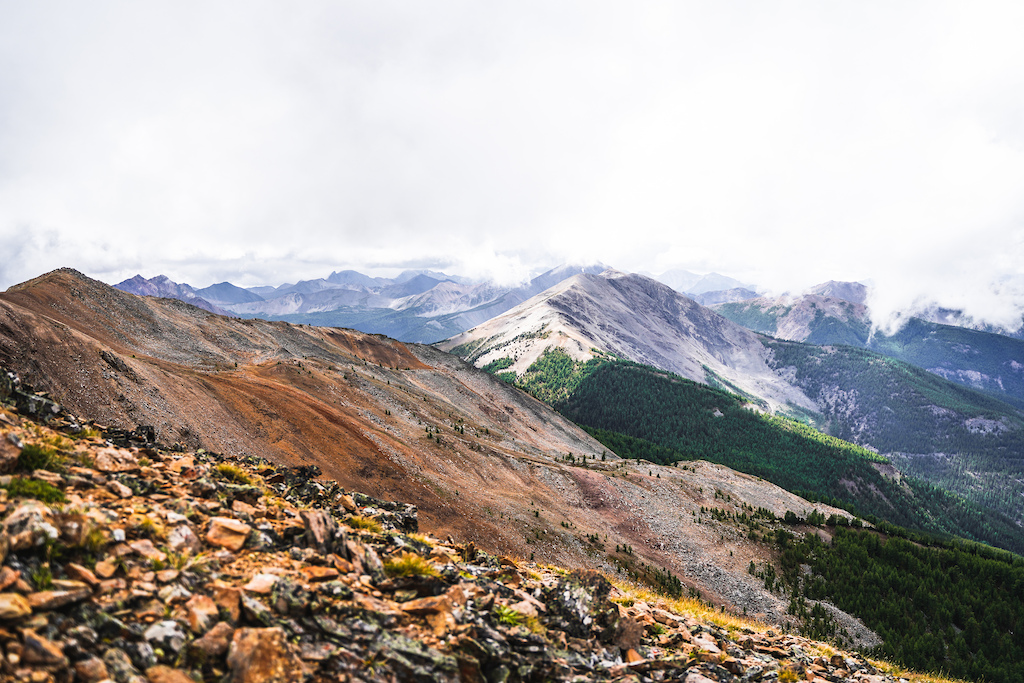 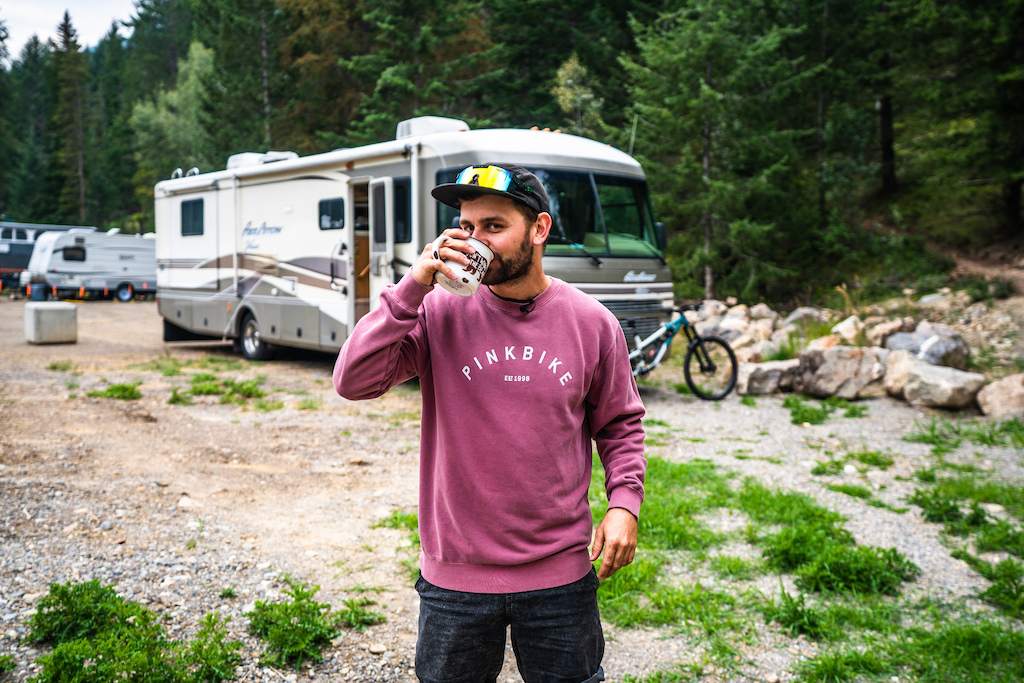 H.M.C.L.S. (Her Majesty's Canadian Land Ship) Fiona in all her glory. 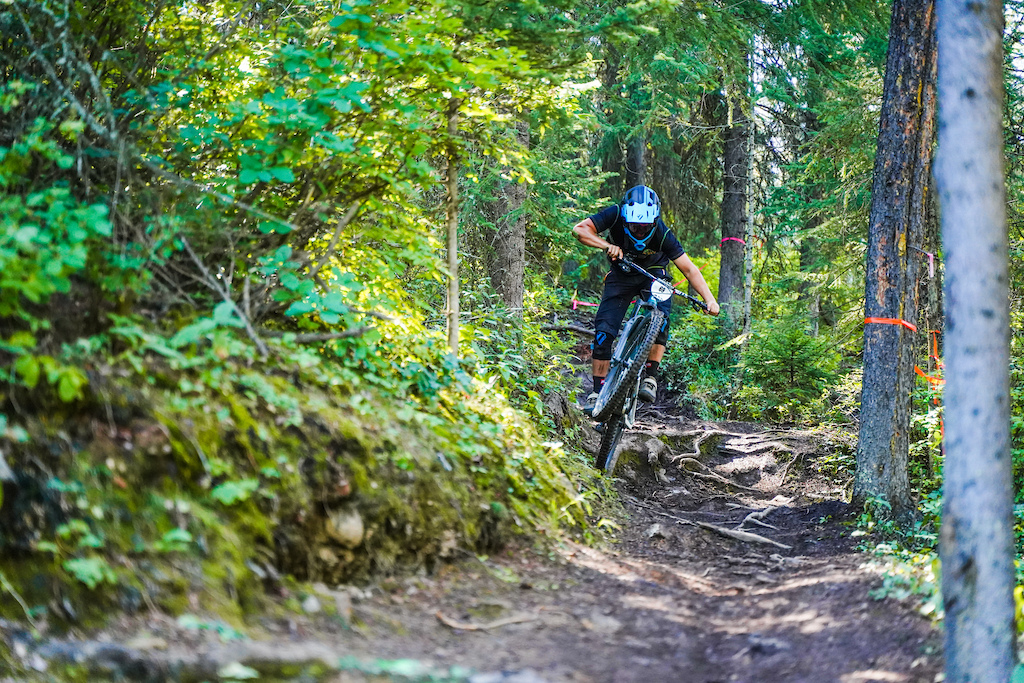 We were here for the first round of the Canadian National Enduro Series. 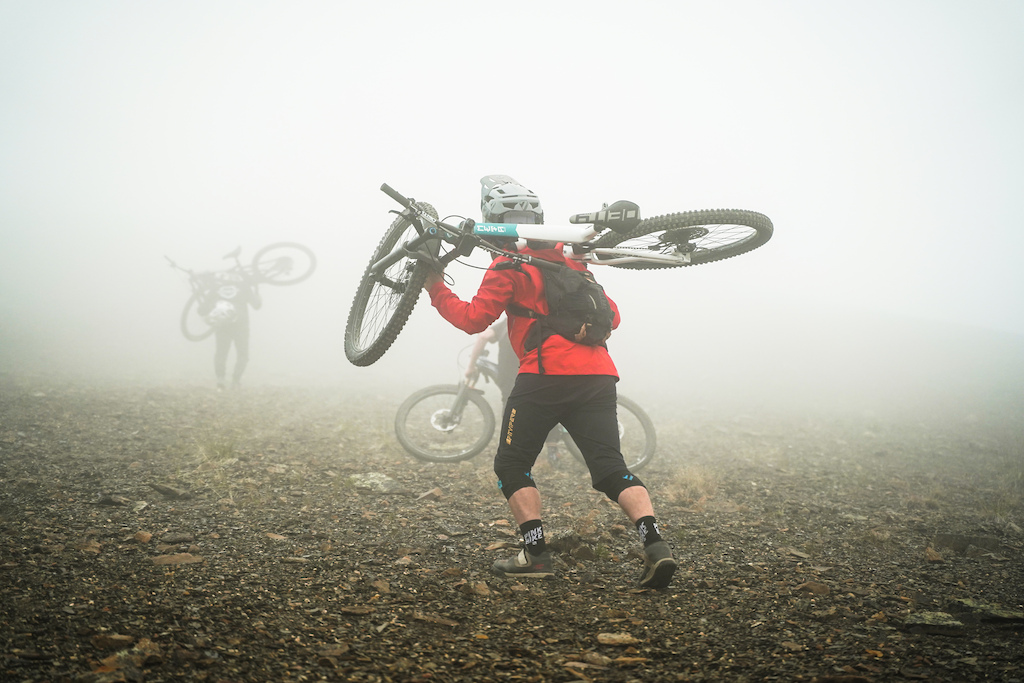 The course was set for a huge riding weekend. We were in for a treat. 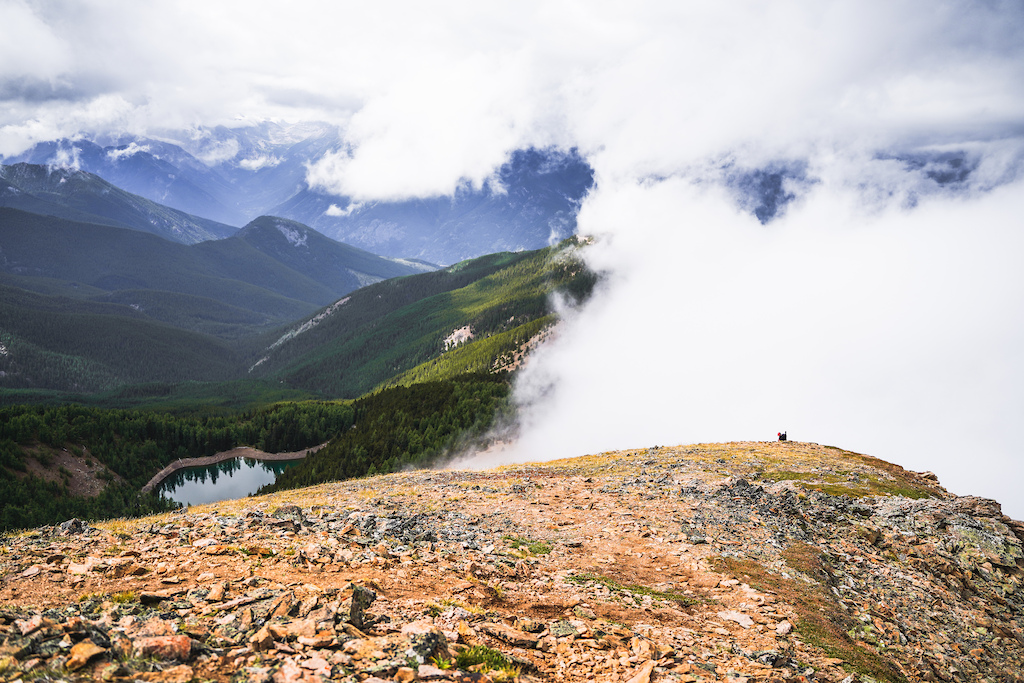 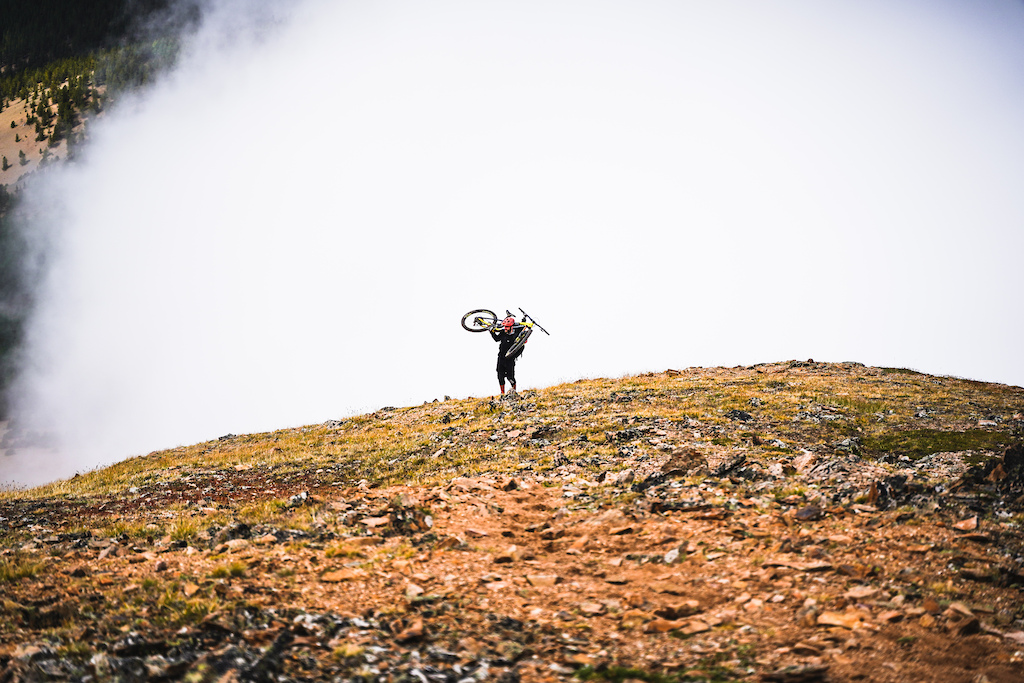 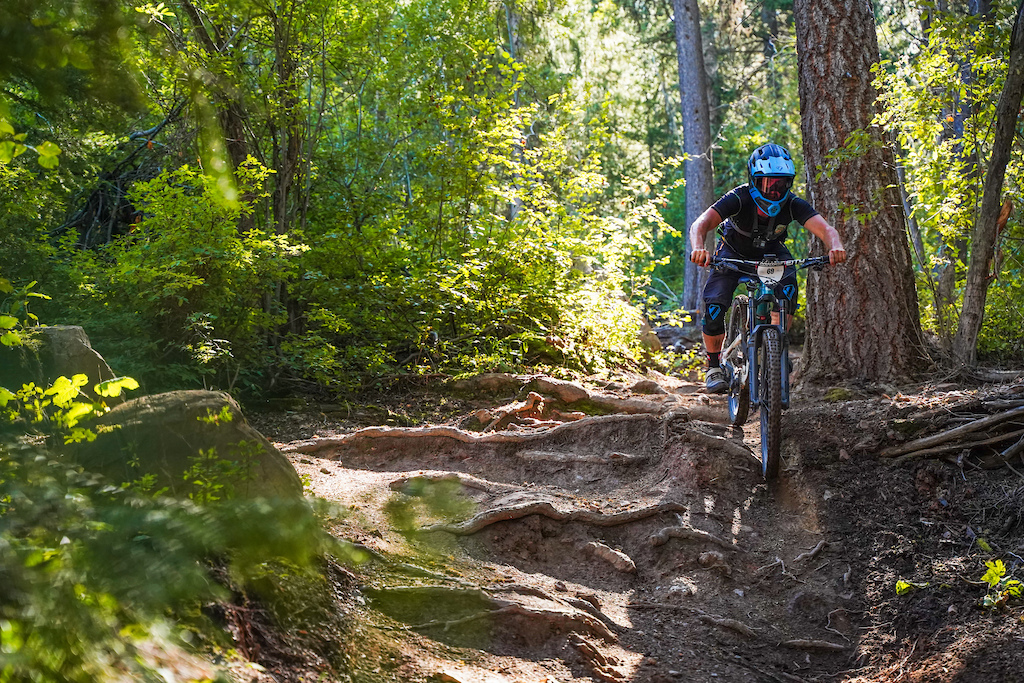 After the beautiful alpine mission, the course returned to the Panorama Bike Park for the remaining stages. It gave the riders a challenge of how to structure practice. Do you spend all Friday hiking to the top of Goldie to practice one stage, or do you spend your time focussing on the lower down valley trails and run the longest descent of the weekend blind? 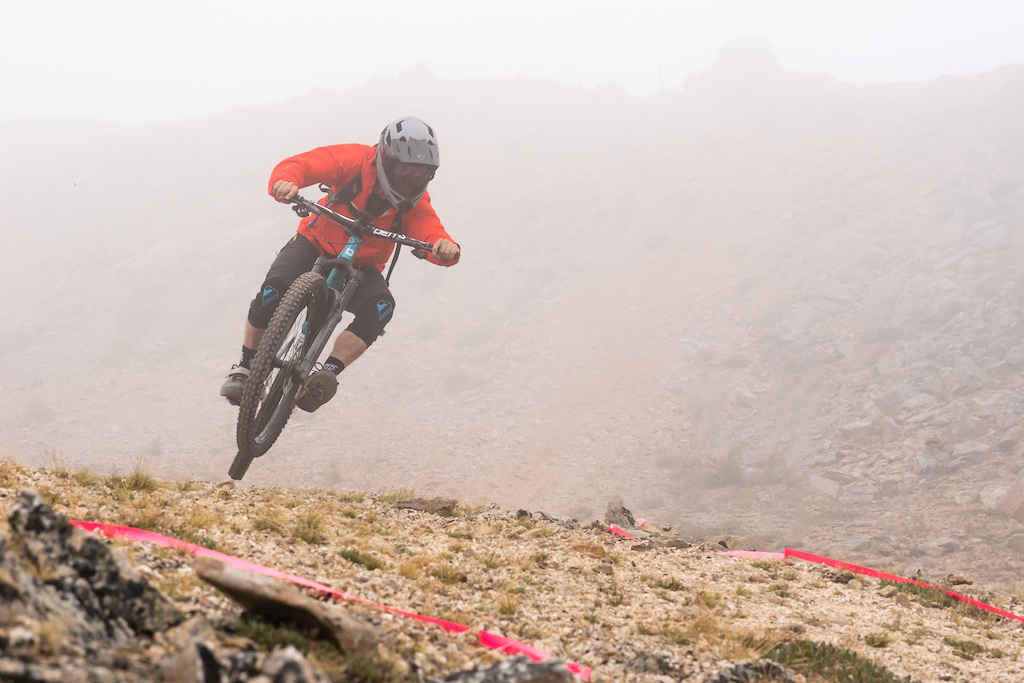 Our plan was to get into the alpine ASAP. Because... look at it. That meant that I could practice Stage 2, and then squeeze in Stage 1 and 3 on Friday evening, leaving the remaining stages to practice before racing started the next day. What a plan. Or so I thought. 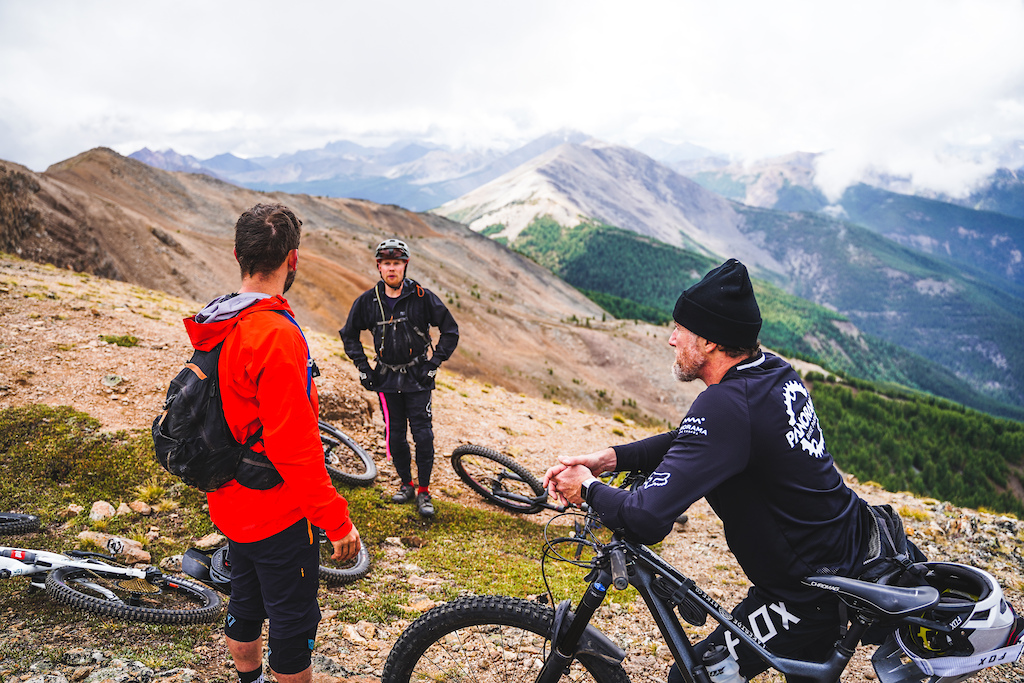 As I should've realized, nothing goes to plan anymore. The race organizers did a fantastic job pivoting to provide all the racers a chance still to race in the weekend due to a last minute health restriction change. 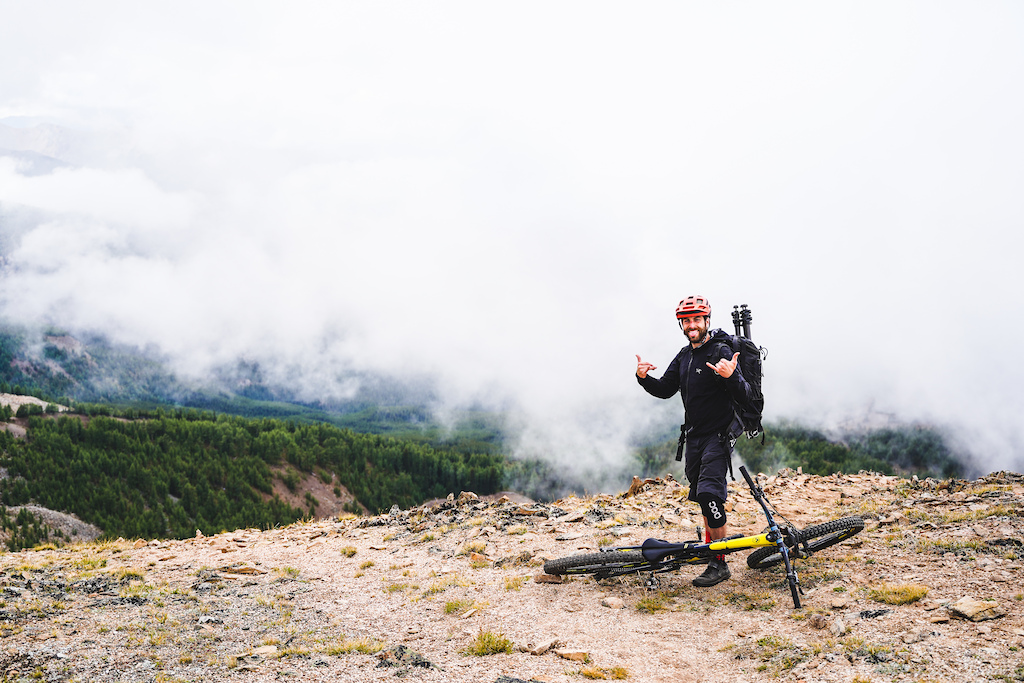 No matter the change, what blew me away was how genuinely happy people were to be there, back together again, exploring on their bikes.

The end result was taking plate #69 to the Pro Men podium, a dream result. But at the end of the day it was just a result. I took so much more away. It didn't matter that the event format changed. Seeing 200+ riders stoked, exploring a beautiful part of the world with new and old mates on their bikes, and 36 foot motorhomes, was something special.

Make sure you get a chance to watch the full video, it was a real laugh. A huge thank you to Outdoorsy for making this project possible.

As well as the Canadian National Enduro Series for having us, Jason and the Panorama Mountain Resort team for hosting, the local legends who built fresh loam trails to race, in particular Mayor Jose. And last but not least, all the racers, supporters and volunteers for getting together, rolling with the punches, and having a great event together. You beauties!

Tombrad (Nov 9, 2021 at 10:36)
Thanks @withdignityifnotalacrity, bringing back that "good vibe guy" kinda pace

withdignityifnotalacrity (Nov 9, 2021 at 10:53)
@Tombrad: feels like you would have given those fast boys a run in Season 1 PBA, you know, if there was actual racing to be had

bonkmasterflex (Nov 9, 2021 at 11:38)
This is one of the best PB productions I've seen to-date! Filming was amazing, and Tom is a fantastic host. This place looks gorgeous as well and the riding looks unreal!!

anyexcusetoride (Nov 10, 2021 at 1:18)
Absolutely agreed. Loved many aspects of this! The racing itself, the trails looked sweet, Tom's stoked as heck energy that we can all relate to when hitting up a new race, the filming and editing and the atmosphere of all the other racers. Would be great to see coverage of the other races in the series if that is the plan

christinachappetta (Nov 9, 2021 at 9:58)
Yessss Mate! Fabulous weekend away sounds like hahah even if all plans were out the window

Tombrad (Nov 9, 2021 at 10:35)
@christinachappetta thanks maaaaate - imagine the mission if you'd be there too, we'd still be out there haha

My kids bought my wife one of those.

ridingloam (Nov 9, 2021 at 11:28)
Crash corner claimed me as well. Such good times. So sad we didn't get to race the Alpine. We also used Friday for Goldie and it's just so good.

buriedinpine (Nov 11, 2021 at 22:30)
This is one of the best segments I've seen in awhile. Awesome work @Tombrad and production team! Can't wait for the crossover episode where you ride with Cathro.

RBalicious (Nov 9, 2021 at 12:21)
@Tombrad definitely seems like a dude that would be super fun to shred with and kickit. Bradshaw chargin!

NZRalphy (Nov 10, 2021 at 8:58)
Nice weekend away there mate. Great team effort on the video and Thanks for th entertainment.

sonuvagun (Nov 10, 2021 at 0:12)
One day, all is well. The next day, and suddenly the proximity of interaction, and density from the day prior are unsafe.
This is about government bodies saying "jump," and training everyone to respond with "how high?"

cpdp (Nov 10, 2021 at 1:44)
Anyone have an idea what Garmin mount is being used there on the Commencal Meta in the beginning?