Tom Van Steenbergen has posted the horrific footage of the crash that left him with a broken femur, a broken rib and a punctured lung on Monday. Van Steenbergen was guinea pigging a road gap on Monday but the run up and landing were frozen solid. We don't actually see Van Steenbergen come off his bike in the clip but he comes up just short and is being bucked hard as the clip ends. He later said on Instagram that he thinks the injury happened after he was bucked but he isn't 100 percent sure.

Van Steenbergen said in a post on Friday that he lost a lot of blood but is now home and is putting weight on his leg and lifting and bending it without painkillers. Once again, we're happy to hear that Tom is out of the hospital and back at home and we can't wait to see him sending it again.

We fired Tom over some quick questions to get some more information about the crash and his recovery:

Was this part of a video project or something you were just riding for training?

Tom: This build started out of the love I have for hitting big stuff. I did plan on shooting it with Calvin Huth for a video project we've been wanting to do.

Did the conditions make the jump ride differently from what you expected?

Tom: I’m pretty damn calculated when it comes to hitting big stuff like this. The frozen ground made a big difference in speed.

I don’t think many people know that I hit it twice. This first time was sooo close, I came up short maybe a foot and got really lucky on my crash. Then got a new bike built, went back up the next day to get it done. It’s probably a combo of being super sore and very difficult conditions.

Who was there and how did they help you?

Tom: My brother Bas and his girlfriend Vaea were there on the day of the crash. Bas helped me judge speed and they made sure there were no vehicles coming. They did an awesome job calling the ambulance and getting me help so quickly.

How long do you expect to be out for?

Tom: I have a video call with someone tomorrow to see what recovery time I’ll be looking at but I’ve been through some bad injuries and I always come back stronger. Whether it’s 3 months or 5 months, I’m going to do whatever it takes to come back stronger but also be smart about the longevity of my career. I want to be able to do this for a long time.

What can we expect in the future from Tom Van Steenbergen?

Tom: I have some really big things in the works. I’m not sure if I’ll be able to pull it off, but I’ve been trying to do a World Record jump for years now. I won’t get into details but we’re getting closer to making it a reality so I really hope I can make that happen. That’s my biggest goal for 2021. Other than this, I’m hoping to make Wild West 2 and a few more video projects. 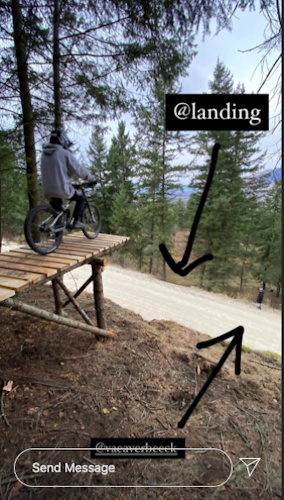 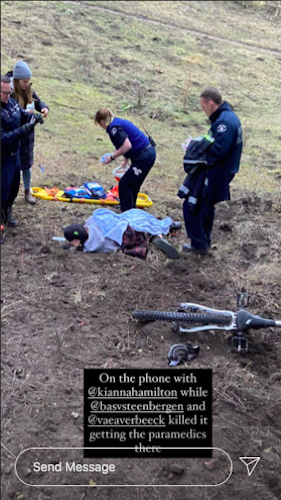 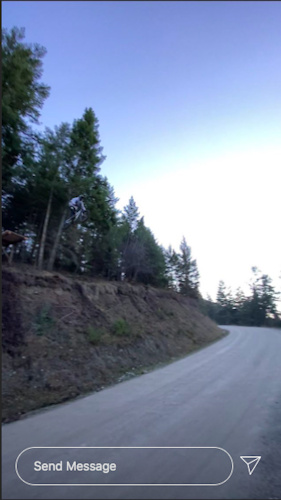 BigAlfonz (Nov 16, 2020 at 2:46)
I believe this crash was caused when Tom lost concentration as he approached the launch ramp and saw the videographer holding their phone in portrait mode.

levifranz (Nov 16, 2020 at 17:57)
Actually just learned about this particular type of fracture in medical school, its called a janitors fracture. Because even the janitor could pick it out.

Camstyn (Nov 16, 2020 at 1:54)
Get well soon Tom, you're the inspiration us old broken farts need to send our 40 footers. Always a bad ass, keep up the good work.Hope your recovery goes well and you grow an even better, stronger femur. Oh to be young again.. Keep grabbing it by the balls dude!

thenotoriousmic (Nov 16, 2020 at 18:53)
@jclnv: Some of the gaps he’s hit on a race run have been insane. How does he be this successful yet still remain so underrated to so many riders? Didn’t he win the world championships and then complete at rampage the following weekend?

swellhunter (Nov 16, 2020 at 3:28)
Breaks right on the case. Clear as day - matches x-ray perfect. Horrifying wreck bro - heal up quick. Your attitude of gratitude is good one man!!!

rallyimprezive (Nov 16, 2020 at 8:23)
I agree with you - it looks like his right leg buckles on that landing. The whole thing makes my palms sweaty. Im so glad he's going to be ok.

rallyimprezive (Nov 16, 2020 at 20:02)
@RadBartTaylor: Yup, im sure that's the case. Just making small talk with the person I replied to - it does *look* and sound like it happened on the first impact.

lwk (Nov 16, 2020 at 7:53)
yea, get well! He says the frozen ground made a difference - in what way? I assume that would make you faster (but he comes up short). If it slowed him down, wouldn't he have noticed that on the run in and either pedaled harder (or stopped before the jump)? Not poking at him, honestly curious. I'm always looking for bits of info on how to evaluate and gauge bigger (to me) moves.

kcy4130 (Nov 16, 2020 at 10:08)
Frozen isn't necessarily faster rolling. Sometimes, if there's a lot of moisture in certain types of soil when it freezes it pushes up small chunks of dirt and/or little ice spears, when you roll over them they crunch down. It essentially makes the soil softer and slower rolling. Also sometimes the little chunks are solid enough or there is gravel over smooth frozen trail, and they roll under you like marbles on a hard floor. This can make for very interesting cornering!

TobiasHandcock (Nov 16, 2020 at 15:10)
Sorry about your crash dude but thats an gnarly old school freeride road gap right there so props for doing something like that!

Curse-of-the-foot-long-sub (Nov 16, 2020 at 18:33)
"My brother Bas and his girlfriend Vaea were there on the day of the crash. Bas helped me judge speed and they made sure there were no vehicles coming."
Good going bas

Nkautzman69 (Nov 16, 2020 at 13:50)
I stepped through the video, now I will probably have nightmares.
- His ass crack must hurt like hell. He buried the rear tire in there deeper than I thought humanly possible.
- Pretty sure his bike had terminal rear suspension bottom out. You see it compress beyond all possible limits and don't see any rebound, probably broke the shock mount off; I'm thinking somebody is going to need a new bike.

I overshot a jump at the wrong angle and landed in the rocks, broke the front and rear triangles on my bike and my right radius into 5 pieces. but damn at least I walked away, brutal crash, speedy recovery.

PHeller (Nov 16, 2020 at 7:08)
That's actually far better for your recovery than a complex fracture. My wife shattered her femur closure to the joint, 6 or so pieces, and it's been a nasty recovery.

captaindingus (Nov 16, 2020 at 13:31)
the surgeons would have placed a rod through his femur. the bone isn't healed but he can weight bear and no more damage will be done

PHeller (Nov 16, 2020 at 13:46)
@captaindingus: Yep. If the surrounding muscle and tissue wasn't severely damaged from the break and surgery, he should get back to using it pretty darn quick, and in theory it should be stronger than the bone its inside of.

localmotion (Nov 16, 2020 at 12:00)
Ouch! Last time I saw something like this was when the take off crumbled away for Mike Kinrade in Kamloops (?) and he landed the exact same way.
Hope you heal up fast!

dragonbones (Nov 16, 2020 at 18:16)
Oh god was the second *crack* as you hit the ground your femur breaking? I know from experience that a femur breaking is LOUD.

Heal up. Enjoy the meds. Back on your road bike in a month.

Benjamin97 (Nov 16, 2020 at 17:32)
Did he build up a whole new bike because of the case on the first attempt? i guess when your hitting stuff this big you need a freshie every time

Nonsmoker (Nov 16, 2020 at 18:24)
You play with fire, you're gonna get burned sometimes I am afraid. Looks like he needed a tad more speed there. Healing vibes, TVS.

hamncheez (Nov 16, 2020 at 7:03)
So glad that crap show political commentary from the other article hasn't infected this one. Hope he heals up and gets better. Many of us know personally how much it sucks to be out for a whole year with serious injuries.

Michael-co (2 days ago)
Massive case hope he gets well soon.