This past May, Velosolutions led by Claudio Caluori travelled to Israel thanks to a partnership formed with the Bartali - Youth in Movement (NGO) on a mission to build the first Pump For Peace projects in Israel, at Ben-Shemen and Ayanot Youth Villages. Both of these youth villages serve as a home for boys and girls from different backgrounds who reside at the village all year long, including Jewish, Muslim, Christian, Druze and immigrant youth, many of them lacking any family support.

During the construction of the Pump Tracks, the Israel-Palestinian conflict escalated, with thousand of rockets being launched by Hamas towards Israel, and Israeli Defence Forces responding with airstrikes towards Gaza.

While most of the crew had opted to leave the country due to the situation, Claudio and Jesse Braden, one of his employees, had decided to stay in Israel to finish the construction of the two tracks. This video made by Ohad Nir documents the process. 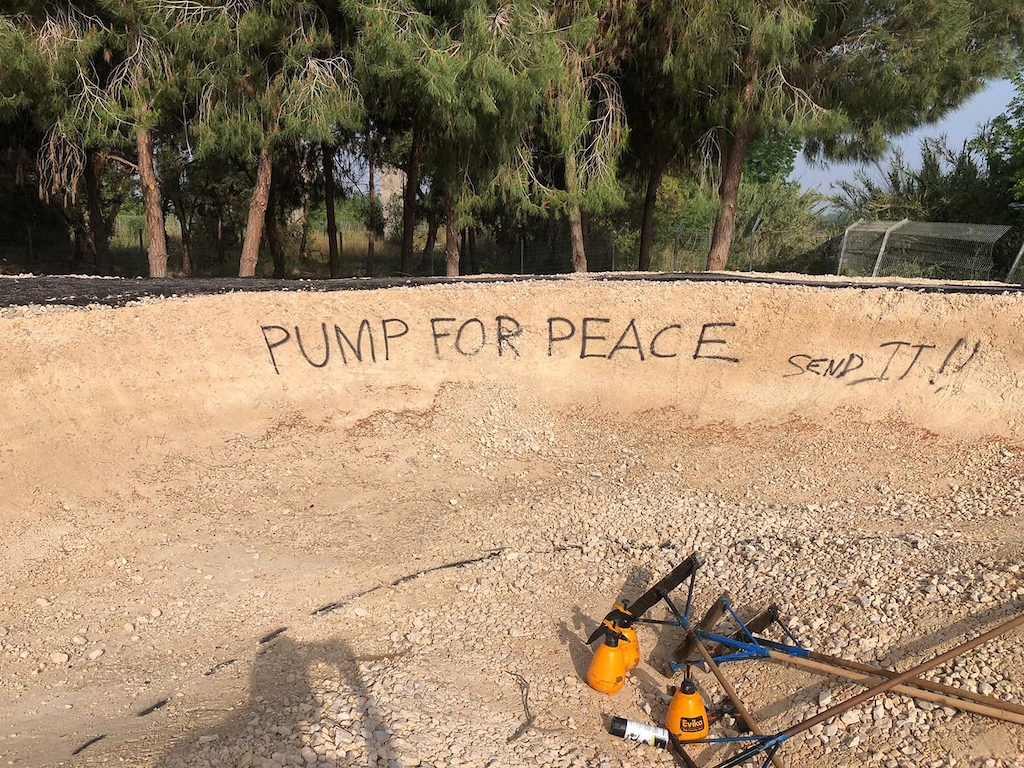 About Pump For Peace:

Pump for Peace is a global initiative focussed on building pump tracks in underprivileged communities, with the aim of making cycling and action sports more accessible than ever before. No matter your race, gender or religion, sport has the power to unite communities around the world. Pump For Peace was founded on this belief. By making the sport more accessible, we can help promote a more tolerant future.

Velosolutions has been building pump tracks around the world for over a decade and throughout that time they have witnessed the ability pump tracks have to transform communities and lives by making sport more accessible. Not only are they amazing fun for all, pump tracks also have the power to unite communities, instil passion and promote a healthy and active lifestyle. Pump For Peace has become the Velosolutions way of contributing to creating a better world for all. A total of 8 "Pump For Peace" projects have been built up to date across Africa and the Middle-East, and many more are in the works for the coming years including projects in Uganda, Ethiopia, Palestine, Iran, Tobago, the Navajo Reservation and Armenia.

Background of the Bartali Youth in Movement:

Bartali - Youth in Movement is a first of its kind social and educational youth organisation that was founded by former Pro Israeli rider Ran Margaliot. The organisation is named after “The Righteous Among Nations” Gino Bartali, who risked his life to help save the lives of hundreds of people he had never met, during WWII. Promoting its vision of using cycling as a platform for empowering at-risk youth, Bartali - Youth in Movement currently runs the program in 8 youth villages around Israel (Ramat Hadassah, Ben Shemen, Kaduri, Alonei Yitzchak, Ayanot, Mevo'ot Yam, Nahalal, Ahava & Malkishua Rehab center) for a total of 300 youth.

everythingscomingupmilhouse (Oct 1, 2021 at 15:55)
Agreed. I was unsure whether to post that, I think what velosolutions is doing is really cool, but when you consider everything it's the only thing wirth saying. So yeah, I'm with you, free Palestine

Jeddi7 (Oct 2, 2021 at 3:36) (Below Threshold)
There’s always one person that has to make a positive article into something political.

kleinblake (Oct 2, 2021 at 19:12)
“During the construction of the Pump Tracks, the Israel-Palestinian conflict escalated, with thousand of rockets being launched by Hamas towards Israel, and Israeli Defence Forces responding with airstrikes towards Gaza.”

This is an interesting way to describe a situation where Israel kicks out Palestinians and bulldozes their homes to make luxury apartments for Israelis to profit off of.

Jeddi7 (Oct 2, 2021 at 21:23)
@purplegorillaz: it literally says the project was commissioned to benefit underprivileged kids from a multitude of ethnic and religious backgrounds, and here we have moral saints flipping the narrative for some upvotes.

mybaben (Oct 3, 2021 at 11:25)
@kleinblake: Oh yes,... I def noticed how they phrased that! Should have read, "Palestinian resistance to colonial occupation increased as Israeli military violence escalated."

JonyA (Oct 5, 2021 at 12:31)
@mybaben: they never did, I did the research. Thats is why they try to escape through egypt , but Egypt dosen t let them in.
They are stuck in a land that their own " government " instead of investing in infrastructure and health, are building construction steel pipe weapons/rockets and underground tunnels.
It s like Venezuela, the biggest oil reserves and the country is fuked up .. how is this possible ??? Goverment , the Goverments are the worse thing ever ... Ask any Venezuelan person if they wouldn't want to change presidents wich they didn t choose , it sSAD

Hope yall have a great day and let us keep riding

lifeofloon (Oct 2, 2021 at 3:36)
@YaacovR: your comment above showed that maybe just maybe you aren't at ignorant as this next comment of yours shows you truly are.

mybaben (Oct 3, 2021 at 11:33)
These areas are outside the West Bank and already under Israeli control, so they're not part of the illegal Israeli settlements on stolen land. It's mostly in the West Bank that IS steals land and bulldozes Palestinian homes to build illegal Jewish only settlements. Cheers.

IronWheel (Oct 3, 2021 at 12:02)
Already under occupation control because they massacred the former and rightful inhabitants.
@mybaben:

mybaben (Oct 3, 2021 at 12:40)
@IronWheel: I understand. Ultimately that's true for sure! I was just differentiating that from the land that was apportioned to Israel by the UN in 1947. Of course, Israel has stolen a lot of land since then, besides what they stole and are stealing in the West Bank, so it would take research to remember what they were originally "given" by the UN. For sure that was a much smaller amount than what they have now...

IronWheel (Oct 3, 2021 at 12:51)
I see no differentiation between what happened before or after the Disaster. Israel is a crime. @mybaben:

IronWheel (Oct 3, 2021 at 8:10)
www.newyorker.com/magazine/2013/10/21/lydda-1948
To clear space for a pump track, a massacre of children, women and elderly then deportation of all of the rightful inhabitants was necessary.

commental (Oct 2, 2021 at 2:11)
Kudos for trying to promote a more tolerant future, it's something I'd love to see too. However, looking at how the world is going I feel I have to wish you the best of luck, as you're going to need it.

As an Israeli I didn't like to comment at all since I already know the world doesn't understand (and maybe don't want to...) Israel's side of the conflict.
When someone takes the Palestinians side I can disagree but understand. Spreading total lies that cannot tolerated.

lifeofloon (Oct 3, 2021 at 16:18)
@sb666: is been well documented, a former top Israeli General has come out about these issues and has been very outspoken about them. Shouldn't be too hard for you to find yourself.