We spotted a new Yeti eMTB a couple of weeks ago, and now it looks like Yeti may be closer to launching it as they've begun to tease it. I don't see a review in the upcoming news for the Pinkbike homepage though, so as far as I know you unfortunately won't be seeing a review of it tomorrow or even this weekend.

The video features some glorious type 2-3 fun, but if you don't fancy watching the whole thing, you can see the eMTB at 1:17 and 1:31 or just check out the screenshots below 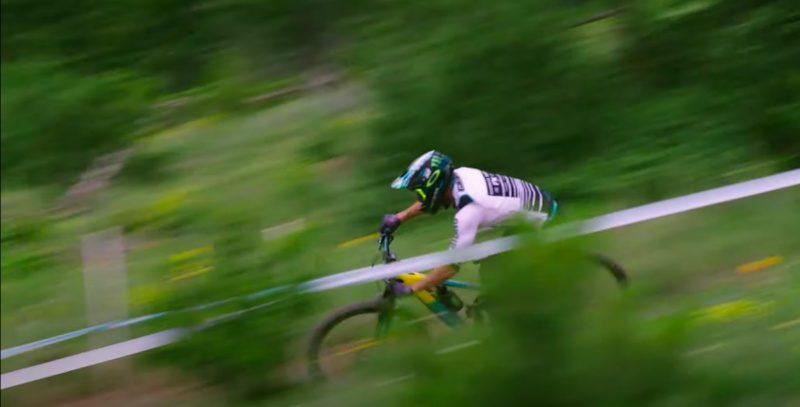 Jared Graves had a post on his Instagram back in June about an "engagement" he had with Yeti that was higher priority than racing the Enduro World Series. We're guessing he'll be the rider featured in the official launch video, whenever that comes out.

yupstate (Aug 26, 2021 at 18:17)
For me, the appeal of a Yeti, Pivot, Ibis, Santa Cruz, etc. is a unique rear suspension design that optimizes pedaling efficiency. This comes a premium though. If I've got a friggin' motor I'm going cheap horst-link all day? Am I wrong?

phutphutend (Aug 27, 2021 at 0:33) (Below Threshold)
For you the appeal of Yeti, Pivot, Santa Cruz, etc. is their easily digestible marketing bullshit that makes me believe their fancy acronyms make the bikes ride any better!!

Waiting for ebikes be banned from /have limit access to trails

These mopeds should have plates, mirrors, lights, because at the end, it is a motorbike. An electric motorbike on pedals.

Jules15 (Aug 27, 2021 at 3:41)
@gonpalco: If it works without peddling it's a motorcycle and only allowed on the road. If it only works while pedalling it's a pedal assist bike or an e-bike/e-mtb

TooManyBikess (Aug 26, 2021 at 21:09)
Oh no! E bike…the worst! Yeti….dentists! Expensive….complain! Blah blah blah. Get the F over it. E-bikes are fun, yeti is a good company for Mtb, and there are price point bikes for everyone (not from yeti, they suck). You get the point.

swaldrop (Aug 27, 2021 at 11:22)
Not an unpopular opinion at all as I see it. Most of these dorks who constantly shit on eBikes have ever ridden one, so can you really count those as actual opinions? Trolls at best. eBikes are fun. I ride bikes for fun. The end.

I bought a bloody Trek with 10% of my income

swaldrop (Aug 27, 2021 at 14:05)
@rudymedea: Lots of ebikes out there for a 3rd of that price, though I'm not sure his opinion revolved around the price of the bike. Also, Trek actually makes an eBike, but that too is likely not the point.

You're all over the place. You've decided how you feel about them and that's fine. Being able to afford something has little to do with whether or not that thing is good or bad. We just trick ourselves in to believing one way or the other so we feel better about not being able to get it I suppose. Bunch a weirdos out there

Think you missed my point there dude, to be fair I didn’t express it too well either!

I stand behind my findings regarding the weirdos though. They're everywhere!

Ososmash (Aug 26, 2021 at 17:55)
I am looking forward eventually to owning a ebeast to pretend to dirt bike around on motorcycle legal trails.

sjma (Aug 26, 2021 at 20:03)
It worked for Porsche with the Cayenne saving the company. Now the Cayennes and Macans fund all the fun 911s and Boxsters/Caymans(Caymen?)

notsofastoverfifty (Aug 26, 2021 at 18:54) (Below Threshold)
My Trek Rail descends way better than my Canyon Sender ever did because the power to weight ratio is so much better. Additionally, you can go find the gnarliest of climbs and have fun creating flow on them.

It's more to do with better acceleration coming out of turns and into jumps than I could ever manage without the extra power.

Also, why d'you reckon my comment above was Below Threshold????

kylar (Aug 27, 2021 at 6:04)
@notsofastoverfifty: probably cause you said something nice about an e-bike. We are just not there yet.

Forgetcomputers (Aug 27, 2021 at 8:11)
“I would never ride an ebike and it’s too expensive and out of stock” is the new “the food is horrible and the portions are too small.” If the bike’s not for you, I don’t really care about your opinions about it’s affordability or availability

ibis88 (Aug 27, 2021 at 14:59)
The days of sketchy bikes on nasty tech trails may be dwindling but they are not dead yet. I'm sure these new enduro bikes with motors on machine built flow trails are a lot of fun but it just doesn't feel quite right to me.

AGABIOU (Aug 27, 2021 at 8:06)
Newsflash- Mikey(The Kix cereal kid) like’s ebikes. People are even like paying a premium over an analog bike. I couldn’t type this if i held out from adopting smart phones. You’ll like them too, and i won’t tell any one (Bush baked beans dog).

anothermtnbiker (Aug 26, 2021 at 21:18)
Then I can roost people that are wondering why they are struggling on tech climbs with their 330mm BB height

derekbnorakim (Aug 27, 2021 at 6:49)
Richie had a Porsche Taycan for a while earlier this year, that can't be a coincidence

dvcpinkbike (Aug 27, 2021 at 8:32)
Dan Bilzerian will be influencing this on his IG soon #effyoumoney

I joke, I joke. Hugs and kisses

mcozzy (Aug 27, 2021 at 3:53)
But pushing a bike uphill is so much fun they say. Retro bikers, wearing their shoes out quicker than their tyres

anothermtnbiker (Aug 26, 2021 at 21:17)
Just needs a throttle, gearbox, and foot begs. I’m being serious. Like a lightweight electric trials bike.