Video: Vihti BC - A Self Shot MTB Short Film

After a year of scouting for new trails near where I live, I found a blank canvas to build something new. No trails, just some deer tracks and rocky trenches made by Russian soldiers from World War I. 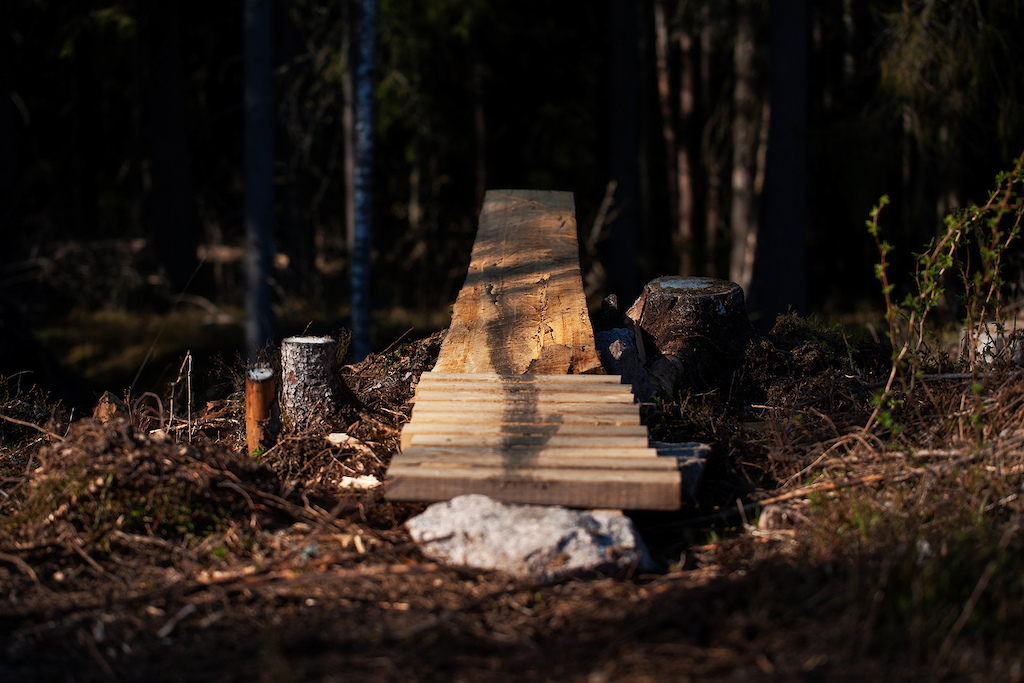 Russians built these fighting lines to Finland in case the Germans attacked Russia through Finland during WWI. That never happened, and now after 100 years it was time to use them for something else. 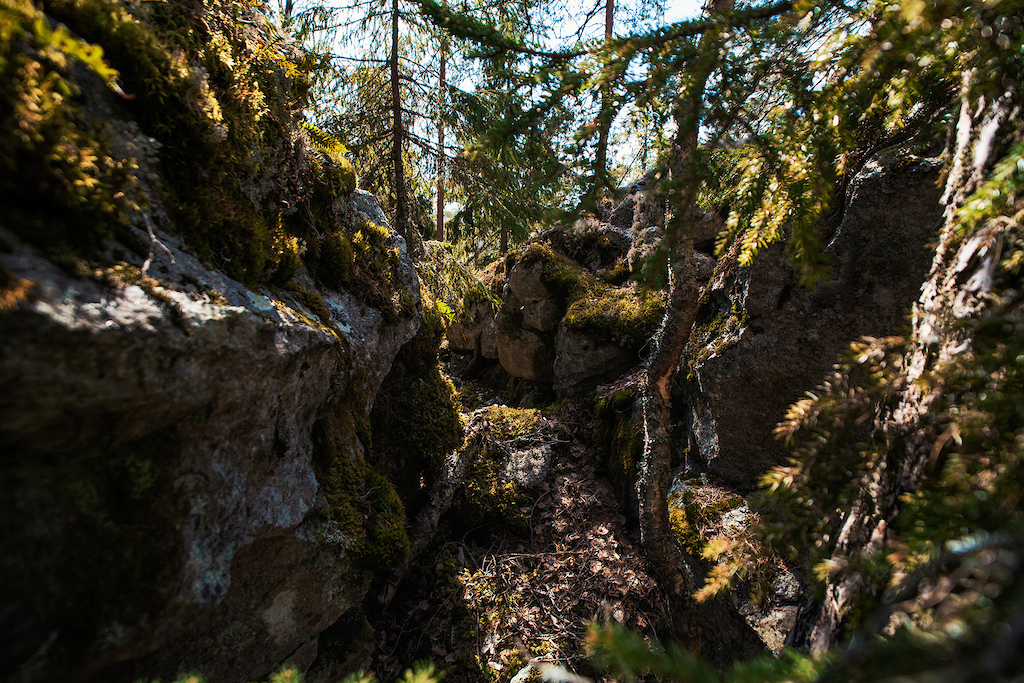 “When you spend all of your spare time in the forest for 8 weeks alone building, riding and filming you might learn something. I learned a lot about the forest, my gear and myself.” 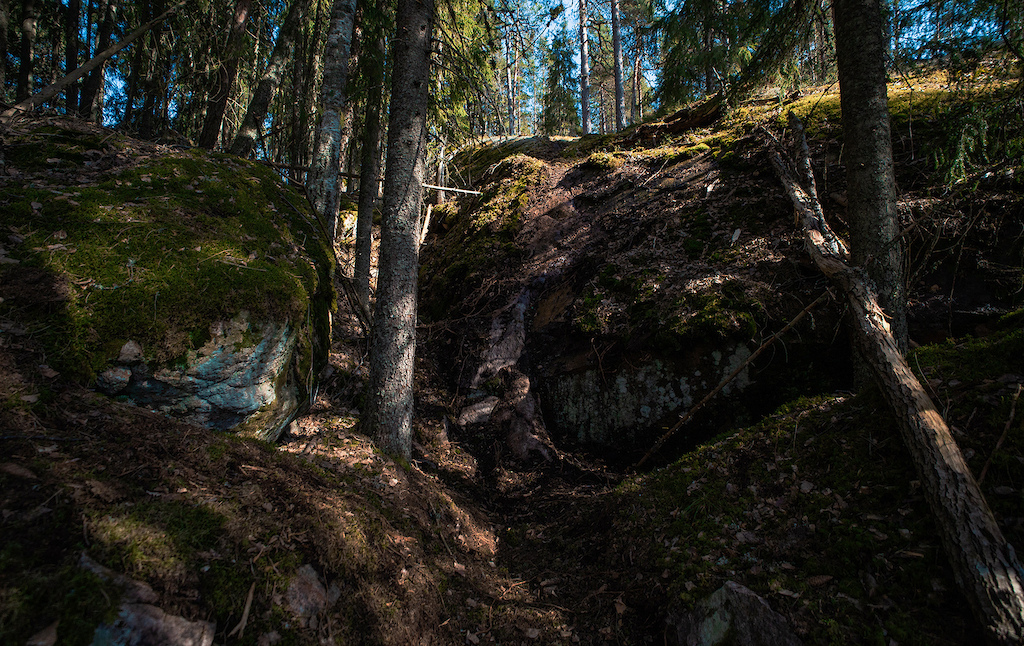 - Be patient when filming alone. Some days you might only get one useful shot.
- Note to myself after breaking one carbon crank and slashing two tires when riding in trenches from World War One that are made of rock, use DH casing tires.
- When filming alone, always try to get a shot, any shot. Just put the camera somewhere. Like Wayne Gretzky said, “You miss 100% of the shots you don't take."
- Don’t leave home without camera batteries.
- In-camera editing is a great memory saver when out there (if possible with your camera).
- Risk management plays a big role when you’re alone in the forest. Know what you are doing and don’t take risks. There is always another day if you’re tired.
- Respect nature. 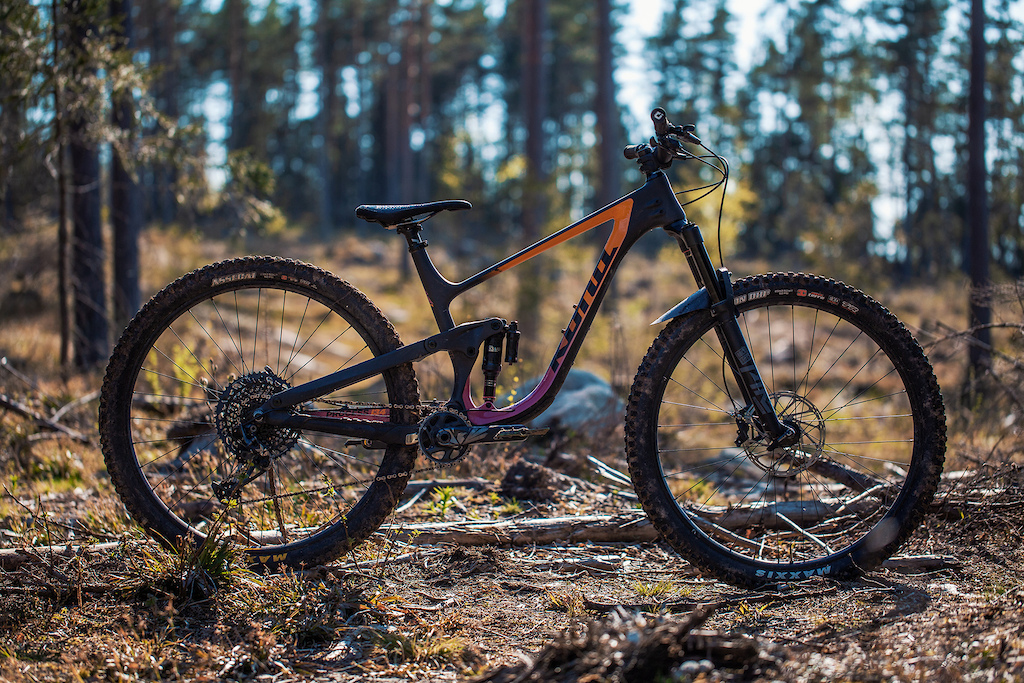 Bicycle, what a great invention. All 140mm of suspension was used while filming.

I did find plenty of rocks while riding. 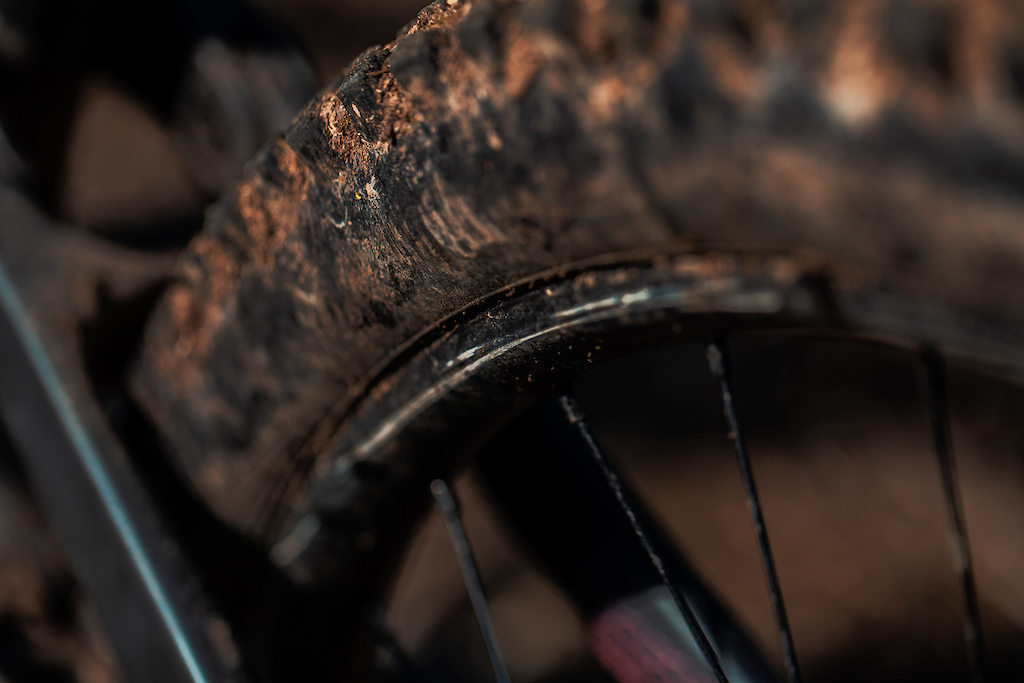 Crank took one for the team. 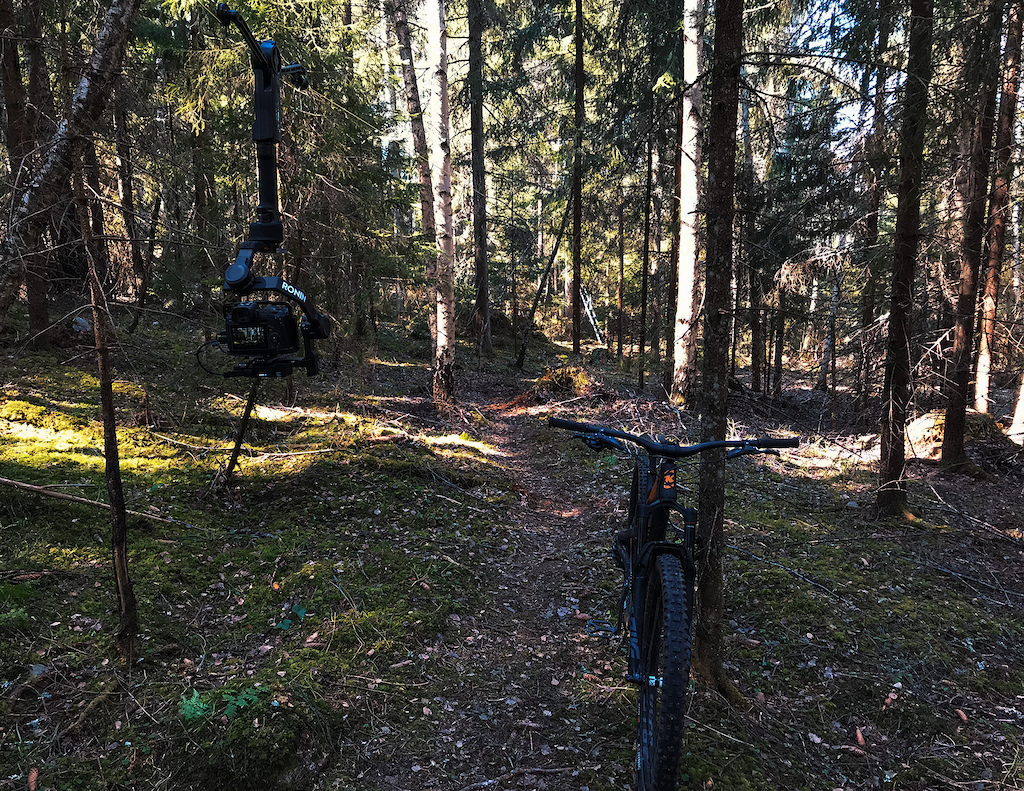 Not the fastest money shot maker when alone.
Camera gear that I used for this project:

That was definitely first time for me to jump over a trench from World War I.

Spring is turning quickly in the summer. 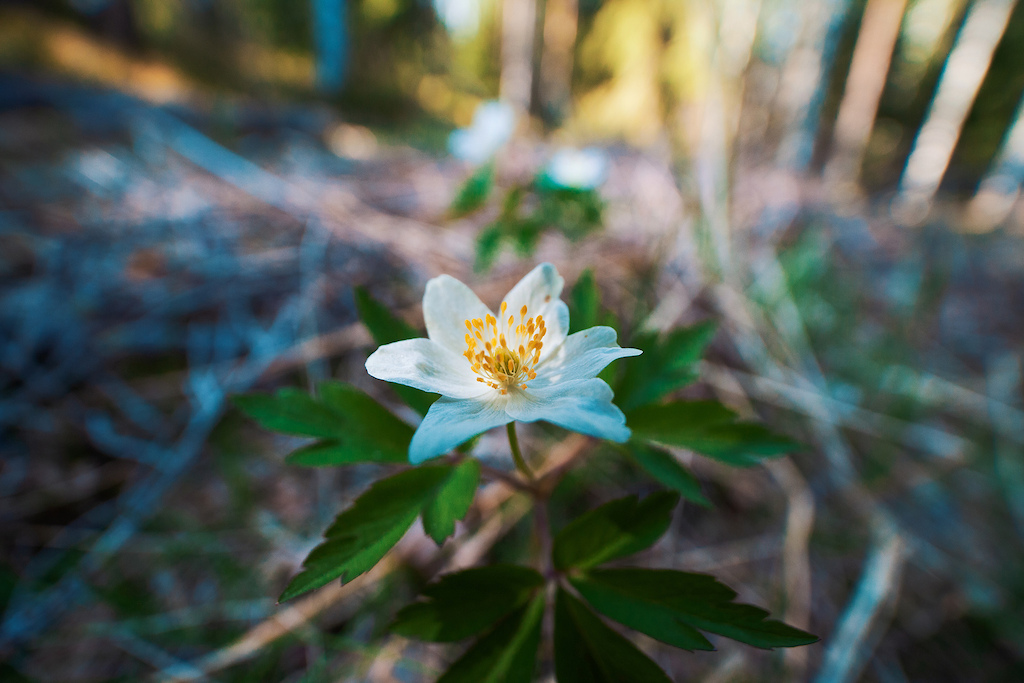 sofamac (May 12, 2021 at 1:21)
Also not too invasive to nature like all these bike highways they build now everywhere.

mark4444 (May 12, 2021 at 6:43)
@Peally: Don't feel bad, the forest will reclaim it within a couple of years if left alone. Also, keep in mind many of the trial initiatives are what got people to respect nature in the first place.

BartDM (May 12, 2021 at 2:33)
That must have bee n tough project, man, so sick, riding,editing,building, just awesome! That place could be eastern Squamish. Anyway, big props for your work, looks like Kona should sponsor few riders on the east side of the Globe! Cheers mate!

Carolos (May 12, 2021 at 2:08)
wtf just happened? what was this sorcery of filmaking, riding and trail building, you sir are my new favourite hero may the force be strong with you.

betobi (May 12, 2021 at 2:30)
What a project and achievement ! Also a very welcome and fresh approach with the music ! this is content that inspires much more that just an other clean Semenuk Vid ( tough I love watching these to humble myself again and again )

l4bike (May 12, 2021 at 11:33)
THAT WAS INSANE!!! Absolutely awesome job man. Curious to know a bit more of the bts of the cable cam shots what you used to get it to follow. Maybe dji active track or something?

PeterWojnar (May 12, 2021 at 12:09)
Awesome work Joonas, from the trail build to the riding to the filming! Self-filming is hard work, especially to turn out something as good as this!

Vindiu (May 12, 2021 at 1:53)
There's a meme about metal bands getting losts in the Finnish forests during photo shoots for ther album artwork. They should consider riding MTB's out of the forest

rbarbier12 (May 12, 2021 at 4:23)
I wonder how much unexploded ordinance this guy finds while digging around WWI trenches. I remember watching a video that said that whole forests in France and Germany are uninhabitable due to the number of shells, and the land that has been reclaimed for farming is chock full of old grenades and shells that they dig up every tilling season.

flavio-san (May 12, 2021 at 5:53)
Yes, it's insane the amount of unexploded weapons still hidden under a few centimeters of soil in the area between France, Belgium, Holland and Germany, as an example the area around Ypres is sadly famous for this.

DirtyRider13 (May 12, 2021 at 4:18)
So much props. My dream is to make historic journeys bike routable and I see you are of a similar mind, but with enough motivation to go make it happen. Thanks for the inspiration.

irideafrica (May 12, 2021 at 5:54)
Seriously good! Well done. Hours of squeezing in walks, scouting, cutting, dreaming &digging. And then there's the filming and editing! Bravo. Looks like a really good place to ride

cmcc (May 12, 2021 at 6:12)
Now thats what I call Mountain biking! Adventure riding through the bush! Good work and riding. Had me smiling.

fatdonkey (May 12, 2021 at 6:18)
Masterpiece! A LOT of hard work went into this project. Thanks for capturing it for us. Amazing choice in music. Rock on my friend.

dontrideontheroads (May 12, 2021 at 12:22)
That wins mountain biking for me, the pinnacle of the sport! and then there's the filming on top! Amazing work

jgottya1 (May 12, 2021 at 9:27)
Well done. Super cool to see these lines that are deep in history with some really great riding and camera work!

linnunaivot (May 12, 2021 at 13:54)
Hyvää!!! This made me remember trying to ride single track on a granny bike in Jyväskylä, sometimes multitasking with a bouldering pad on my back. Awesome video.

MrDuck (May 12, 2021 at 1:31)
Sick! Good to hear some guitars and see some genuinely technical riding, looks pretty fun too!